The Scrapper is an advanced class available to Martial Artists that use heavy gauntlets to throw even heavier punches, gaining her the title as one of the strongest staggers in Lost Ark. Unlike other classes, her abilities don’t cost mana but are made of two different resources which are called Stamina (the yellow bar on the left) and Shock (the green bar on the right). Using Stamina abilities will generate Shock Energy, and using Shock abilities will generate Stamina energy, which is why sometimes you want to focus on maintaining the right balance between the two.

In addition, Scrappers are a really beginner friendly melee class that provide enough sustain with consistent damage while having the needed utility to deal with any challenges throughout the entire endgame.

As a back attacker class, Scrapper wants to deal as much damage as possible from the back of their enemies which is fairly simple with the help of her distinctive double-spacebar-dash.

Besides being somewhat of a tanky melee, the stagger potential is where the Scrapper shines most, which means you will always be a strong addition to the team, as this mechanic will become crucial the further you progress into the endgame.

If you enjoy beating up your enemies with strong, fast, and hard hitting punches, then Scrapper is the class for you.

If you want to level this class, please check our Scrapper leveling guide for a smooth leveling experience.

When it comes to advanced Martial artist classes – the Scrapper is the tankiest melee that doesn’t have lots of ranged abilities but comes with a lot of built in super armor that helps her stay on both feet in the middle of the fight.

Using the feet in her skills however is something the Scrapper doesn’t do at all compared to any other Martial Artist, which is why she relies almost exclusively on punching with heavy hits.

While the Scrapper provides damage buffs to the party as well as being a true stagger talent with her burst abilities, she’ll ultimately deal less damage than her fellow Martial Artists and feels more like a hybrid support when playing her.

To check how well Scrapper performs in the current meta, you can visit our Lost Ark tier list.

Scrappers, just like other Martial Artists, are a burst oriented class. Your ultimate goal is to always make perfect use of your meter, whether you prefer to throw a lot of punches without a specific order in the Taijutsu build, or if you’d rather stick with the classic style of play and go for the Shock Training.

Due to their strict energy-kit-split, the Taijutsu build is faster and more straightforward, but lacks some AoE as it mainly uses Stamina skills, hence the best way is to have a good mix of Shock and Stamina consuming skills, so run the Shock Training build instead.

You’ll group up as many mobs as you can before dashing into the center and make use of your best AoE skill in Chain Destruction Fist. After that, you want to use some Stamina skills again while new mobs spawn, and then use an AoE skill like True Rising Fist again. This constant switch between Shock and Stamina skills is also usually smooth, so it’s easy to keep a balance between the two meters.

The hard hitting Shock abilities come with great stagger damage as well, which you definitely want to use against single targets during raids or any boss fights.

As a melee without ranged skills respectively, Scrappers always want to close the distance between them and their opponents in a PvP combat. That doesn’t mean you should jump right into action but more like using your high mobility to either grant yourself backline access to pressure enemy damage dealers or to help peel for your teammates.

The built in Super Armor gives the Scrapper also enough push immunity as protection from any form of CC while using her abilities for the right engage.

As soon as an enemy uses his stand up, make sure to stay close and follow up by using your combos to knock them down again, so that you can unleash your heavy hitting skillshots which will take some time to cast but deal tons of damage.

Your main mobility and utility skill that gives you a damage buff which is why you should always pick it, regardless of your playstyle.

Your main damage Shock skill that comes with good Stagger built into it. This is also a skill you should consider running regardless of your playstyle.
It is also worth mentioning that this skill not only consumes all your stored Shock energy, but the damage is also dependent on how much shock energy you have, so try to use this ability only with a full green bar.

By far your best AoE skill that deals tons of damage. It has high cooldown and a longer casting time but is also perfect for clearing endgame content. You smash the ground to shake the earth and knock up all surrounding enemies

Another main damage skill with high cooldown that takes a little bit of cast time as well, so make sure you use this skill when your target is not moving.

A solid damage ability with a very fast cast animation which you want to use as a counterattack as it also has a low cooldown.

One of another primary damage Stamina skill which can also be used for escaping or chasing heated situations. The skill has good stagger damage.

A channeling skill that throws a series of punches followed by a short forward jump, which is simply great for dealing lots of damage to single target enemies like Bosses.

As with all classes, the Scrapper has access to two awakening abilities.

Arises two black Dragons from the ground that deal a good amount of damage and move you to the target location.

This Awakening skill gathers the energy and air around you onto your heavy gauntlets to unleash a powerful strike in a line in front of you. Unlike Undefeated Dragon King you really want to stay up close, as its damage differs depending on the distance between you and your target.

Every lost ark class has access to engravings that will focus your playstyle in one particular direction. For Scrappers you will choose between the Shock consuming Shock Training and the Stamina consuming Ultimate Skill:Taijutsu. 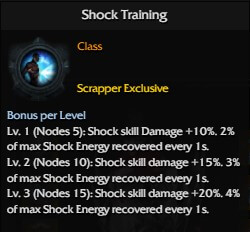 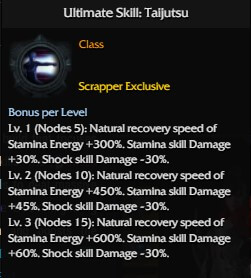 To keep it short, if you decide to play the Taijutsu playstyle, the quantity of punches increases by a lot, but each punch deals less amount of damage in comparison to the Shock playstyle. 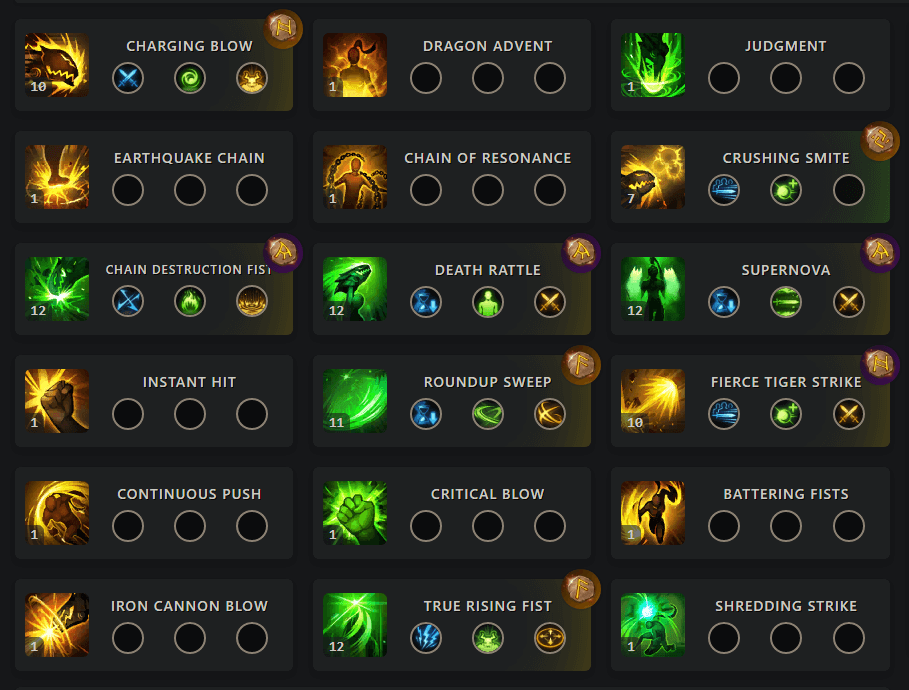 As already stated in the name, this build focuses mainly on skills that consume green Shock energy.

More than half of your abilities here are heavy hitting burst damage abilities like Death Rattle and Chain Destruction Fist but also comes with insanely fast animations in Roundup Sweep.

Your aim here is to always find the right timing to make sure you release all your stored Shock energy on your target.

This is more the alternative Scrapper built that’s faster paced and mobile with high movement speed and consistent DPS. Compared to Shock Training the playstyle of Taijutsu is fairly simple as it requires you to hit whatever skills that are off cooldown. 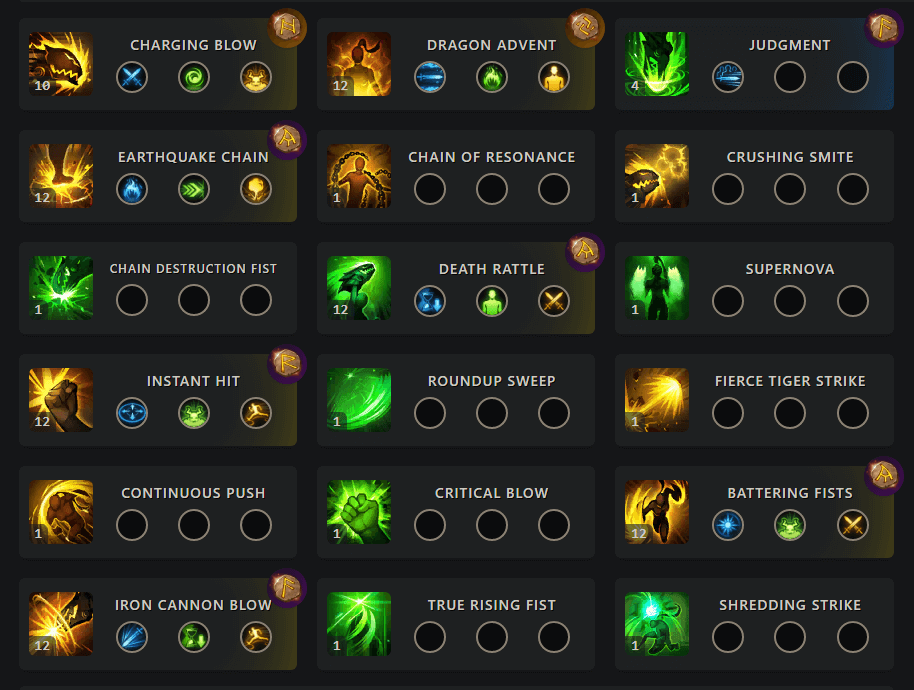 I'm a long-time lover and enthusiast of a variety of games and all things eSports, with an experienced social media background in the field on all platforms. I love breaking down every game I play to make it easier for fellow gamers to understand, with games like TFT, League of Legends, Diablo, and Lost Ark having a special place in my heart.