How to Get Skill Points in Lost Ark (9 Ways)

Skill Points are crucial in Lost Ark as they’re used to power up your class skills by accessing bonus skill effects via the Tripod tier system.

Following this guide will let you max out another skill getting to those powerful third skill upgrades.

The more Skill Points you have, the stronger you’ll ultimately get, so let’s run through how to obtain all 60 extra Skill Points in the game.

There are two separate Towers in the game right now. Climbing up the Tower will reward you with a bunch of collectibles and materials, but more importantly a total of 12 Skill Points.

You can obtain the first 2 Skill Point Potions in the Shadespire and the other 2 in the Fatespire tower which unlocks at Tier 2. These milestone floors are:

Completing an entire continent can be tough as you need to be doing side quests, hidden quests, vistas, killing monsters, and collecting items.

If you are up for the grind then there are 5 continents that reward you with a total of 18 Skill Points by completing up to 80% of their Adventure Tome.

Remember you will have most of these to at least 30% by just leveling through them in the story. These continents are: 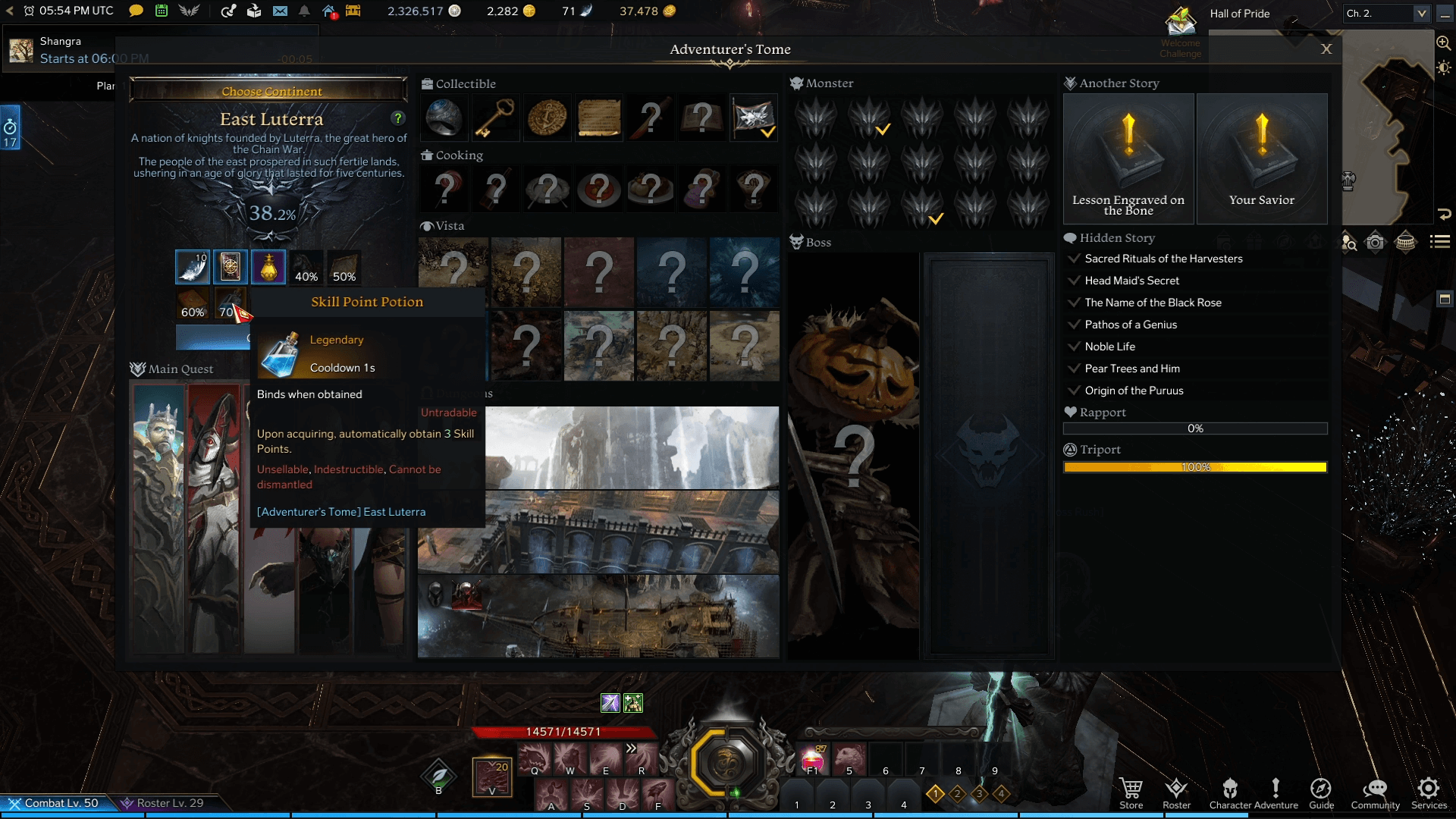 Specific Quest Lines throughout your endgame journey will reward you with 27 Skill Points. Some of them require you to revisit a couple of past dungeons in the story but other than that they’re pretty straightforward and the easiest way to collect Skill Point Potions.

These quests will be spread around the entire world of Arkesia so here’s a quick overview of each quest location and the name of the quest you are looking for:

There’s no MMO without an almost endless amount of items to collect. Island Souls, Giant’s Hearts, Omnium Stars and Ignea Tokens are all collectibles that will reward you with a total of 36 Skill Points.

You will gain these over time as you play the game so you shouldn’t feel rushed to get them all at once but some are easier than others.

You will need 20 islands to get the Greater Skill Point Potion which gives you 6 skill points.

This is relatively easy but will require a little luck for some of the drop chance islands. 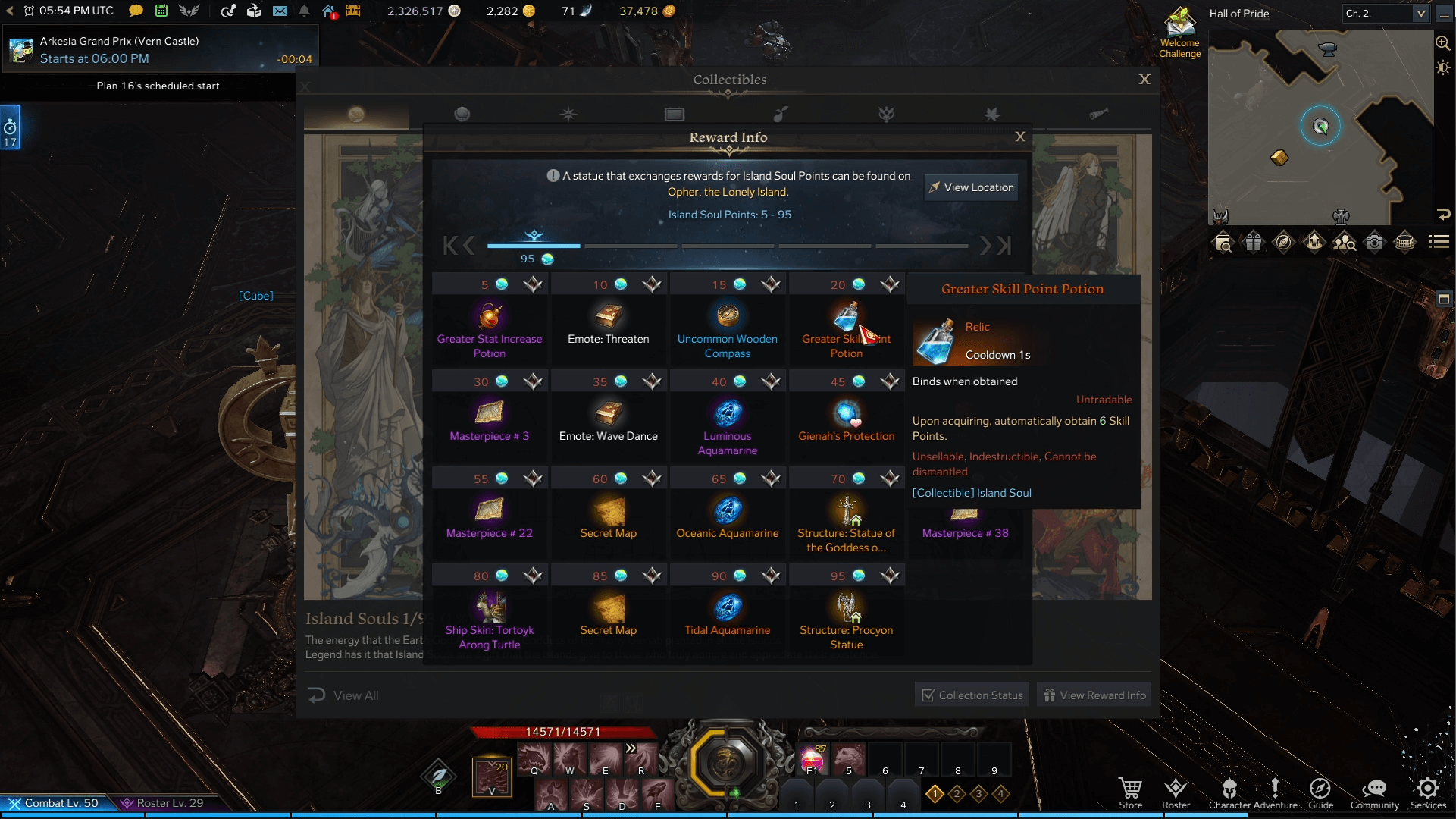 You can get 4 Skill Point Potions from gathering Giant’s Hearts. The first two are rewarded at 4 and 10 hearts and aren’t too hard to get.

Buy three of them from Blackfang’s Den, Atlas Island, and Freedom Island.

You can also get them from Rapport, Quests, the PvE Towers, and Una’s Tasks. 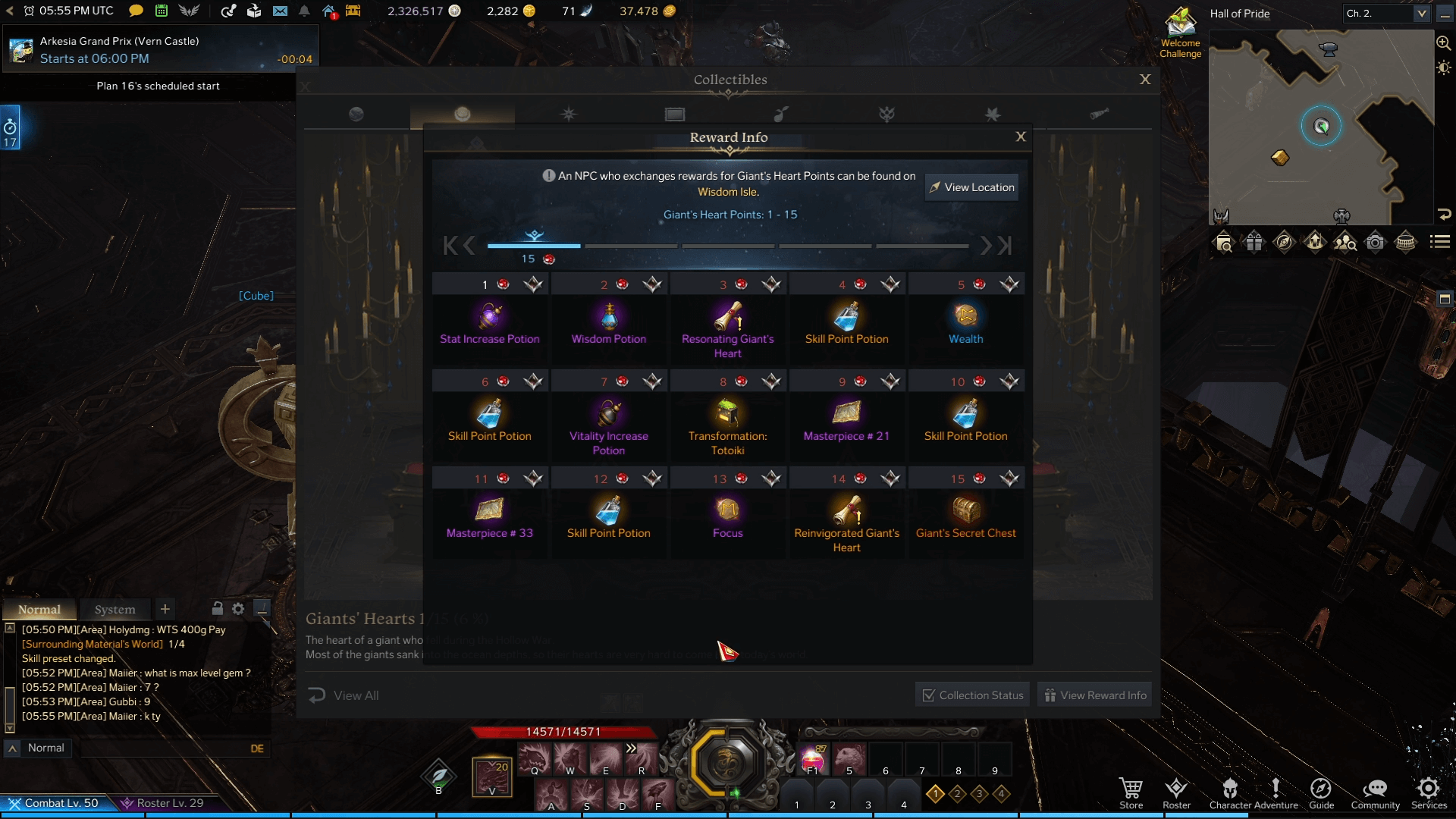 These are much harder to get and are awarded for getting 100% Adventurer’s Tome of a continent.

This reward cannot easily be rushed as you will have to complete the Rapport for each region.

This should be a long-term goal. 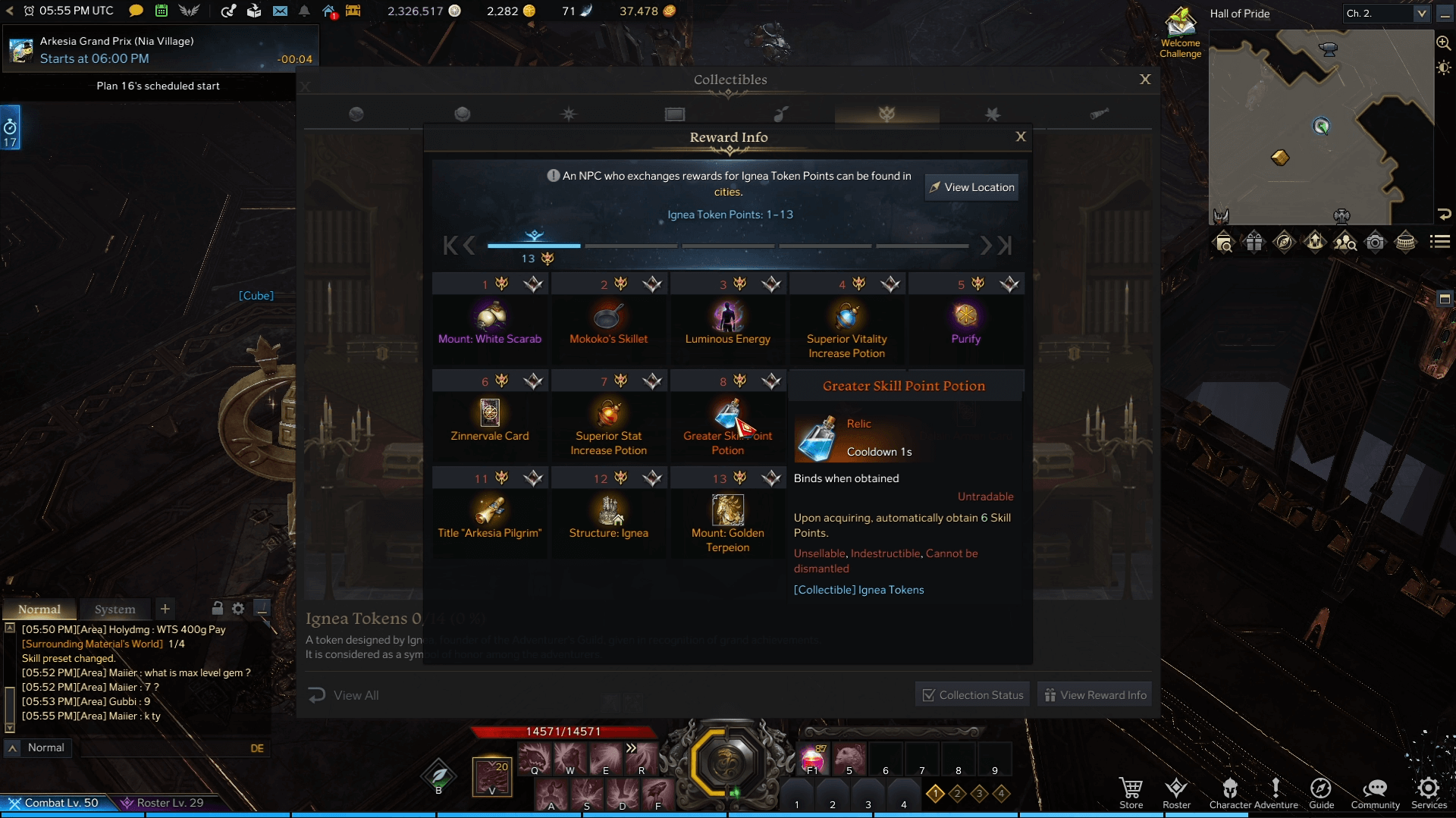 These are introduced when you reach Punika in Tier 3 content.

The first Greater Skill Point Potion is achievable after reaching this point however the second is much more difficult and requires a lot of time and effort. 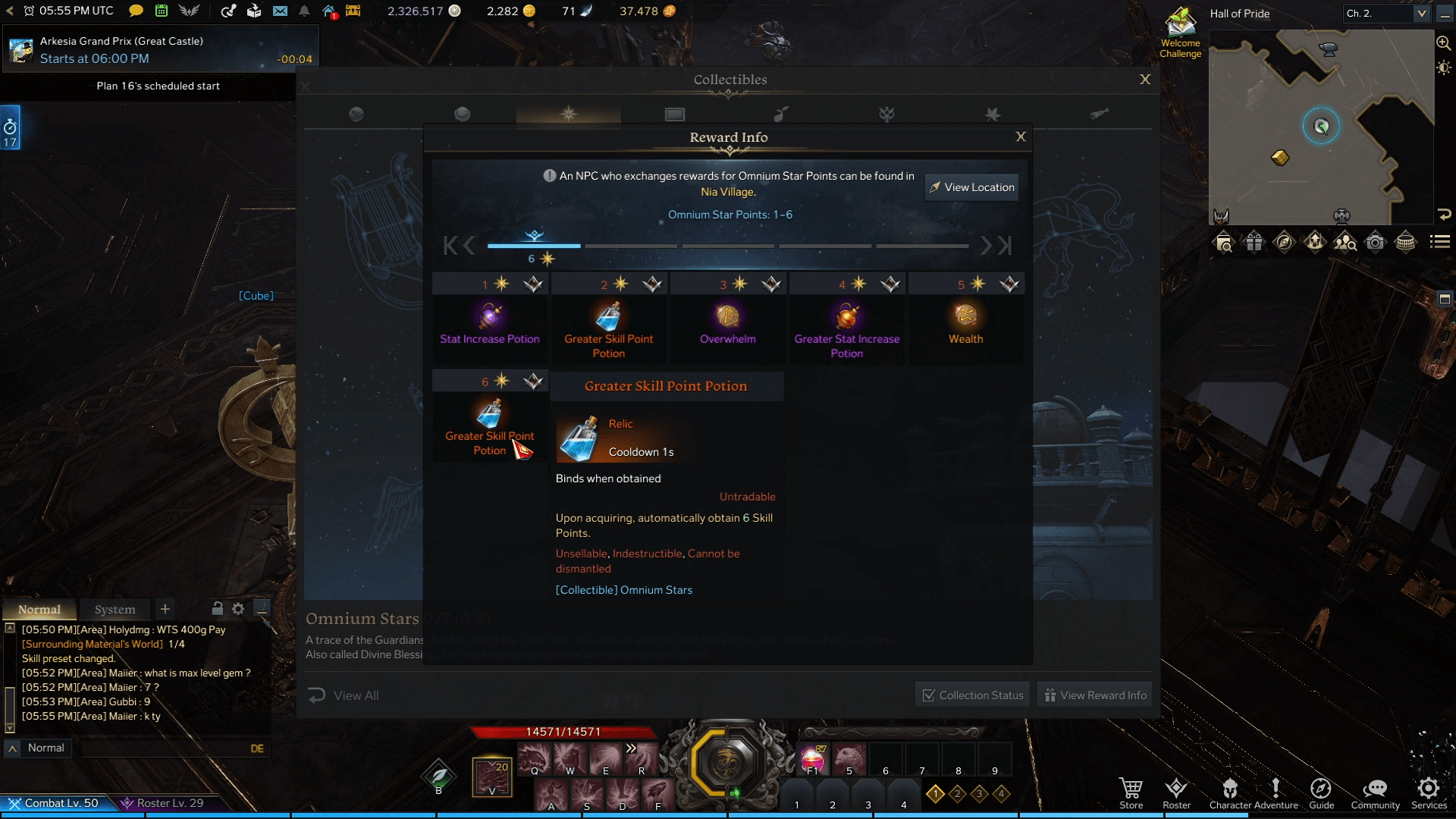 Reaching the endgame is all about completing daily activities, with Una’s Tasks being one of the most important ones.

Usually in-game currencies like Pirate Coins or Gold are the regular reward of Una’s Task, but surprisingly there is a task that gives a final Skill Point Potion.

You have to reach Tier 2 content and Yorn to be able to travel to the Whispering Islet.

After completing the quest chain there, the daily will unlock and you’ll need to repeat it 10 times to get the Skill Point Potion reputation reward. 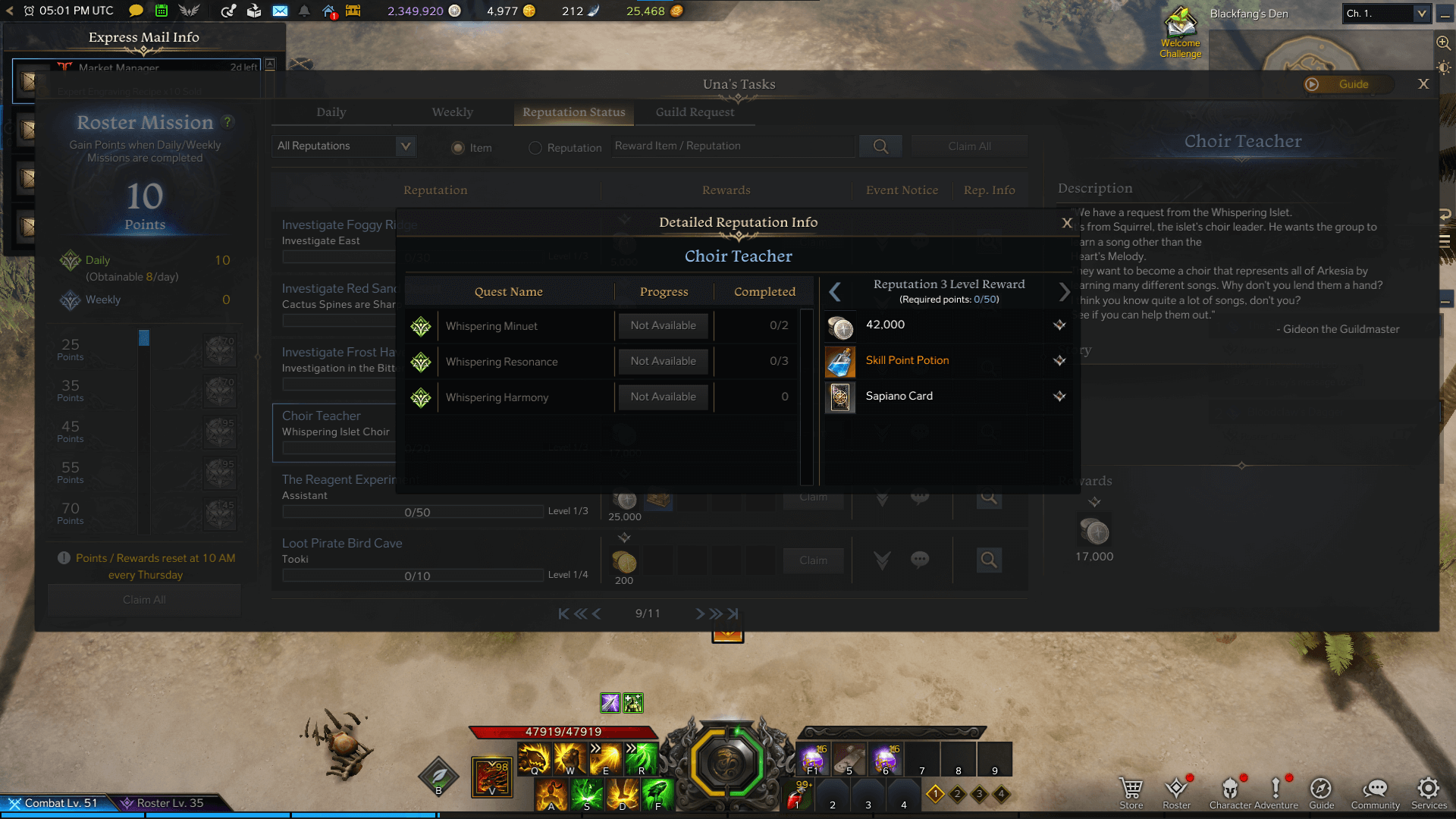 That’ll wrap up where to get all Skill Points in Lost Ark, but as you can see Adventure Tome Completion or obtaining all Collectibles will take you a long time so make sure to enjoy the journey.

For more beginner guides, check out the rest of our articles at our Lost Ark blog!