In this Lost Ark Arcanist guide, we’ll cover builds, tripods, and more to help you play the class optimally through end game content.

Arcanist, also known as “Arcana” is one of the mage damage dealing sub-classes in Lost Ark.

It is of the squishiest damage-dealing classes in the game and that, combined with the fact, that she spends almost all of her time in melee range while fighting, makes her one of the most difficult classes to play correctly.

Additionally, her complex playstyle and identity combos make her very hard to master.

Arcanist uses a magic card deck as a weapon. There are several different types of cards with specific functions attached to each:

Arcanist’s identity is a special deck of tarot cards. It consists of twelve cards and each one of them provides different effects for the arcanist, from damage buffs to an instant skill cooldown refresh. While dealing damage, she builds up an arcane energy meter. Once it’s full, one random card from the deck of twelve is drawn. Arcanist can hold up to two cards at the same time and use them at any moment when you are not cc’ed.

Arcanist is one of the most challenging classes to play in Lost Ark with a fast-paced gameplay and a wide variety of skill rotations. In order to get the most out of the class, quick thinking and fast decision making is required. The class may seem to be very weak at the beginning but as you dive deeper into the class mechanics and gear up more and more, the class begins to shine and feels more and more rewarding for effort that’s been put in.

Compared to other mage damage dealing subclasses, Arcanist lacks ranged skills, so she has to deal most of her damage in melee. She has very weak stagger and some destruction in her skills (not very much but it is there).

Her mobility is way better than Summoner’s or Ignition Sorcerer’s.

While the other two have clear skill rotations that they can follow in combat, Arcanist’s combat flow can vary depending on tarot cards that have been drawn. 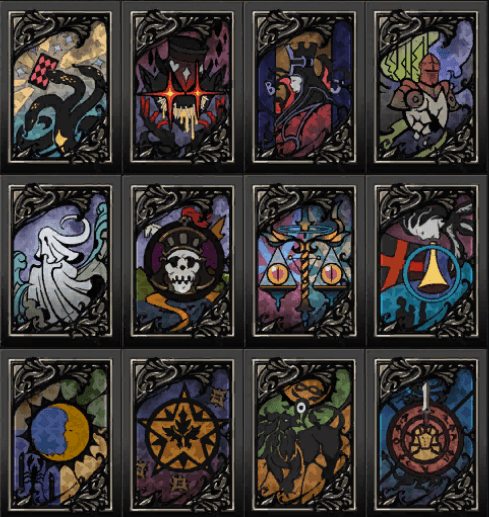 When Arcanist deals damage with her spells she builds up an identity bar. Once it is full, one of the twelve identity cards is drawn. She can hold no more than two cards at the same time. Here is the list of these cards and effects provided on use:

In PvE, Arcanist uses big AoE abilities to keep large groups of monsters in CC and deal good damage at the same time. When it comes to guardians or raid bosses, Arcanist uses her mobility to quickly jump into melee range and apply four stacks of (ruin), then detonate it with (red skill).

While doing that, she cycles through her tarot cards deck to search for cards like Death or Twisted Fate to increase the (ruin) damage while utilizing other cards’ effects for more smooth combat.

For PvP, Arcanist provides good AoE crowd control abilities to keep small areas of the battlefield locked for an opponent for some time. In 1v1 fights, Arcanist can catch her opponent with quick instant stagger skills and perform fast damage combos. The combo deals medium damage but that can be changed with good tarot card draws.

Since she can only catch opponents with stagger skills, she struggles against classes with a good amount of super-armor options and has to maneuver around waiting for a good window to strike.

As with all classes, Arcanist has access to two awakening abilities.

Arcanist surrounds the targeted area with six giant cards. Deals damage inside the area and then explodes, knocking up the enemies. Arcanist draws two tarot cards (one in PVP).

Arcanist opens up the Joker card that deals a lot of damage in the area in front of it. If an enemy is marked with (ruin), the ability deals more damage depending on the number of stacks.

Every part of the Arcanist build is set up around one of the two class engravings. When building character, you choose between playing around, applying and detonating four ruin stacks, or deal damage with common cards skills. The two playstyles are very different from one another. 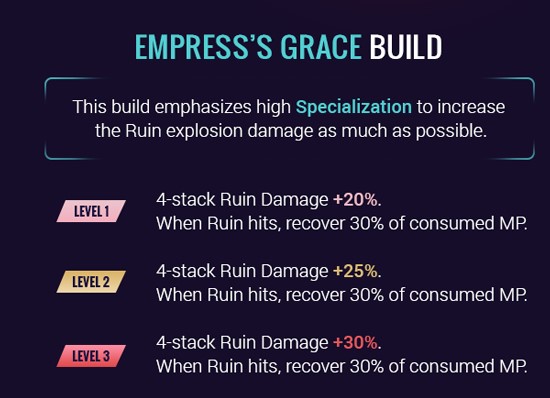 Detonating four stacks of ruin deals 20%/25%/30% more damage and restores 30% of mana spent. The build around this class engraving utilizes high specialization stat to increase the ruin explosion damage as much as possible. 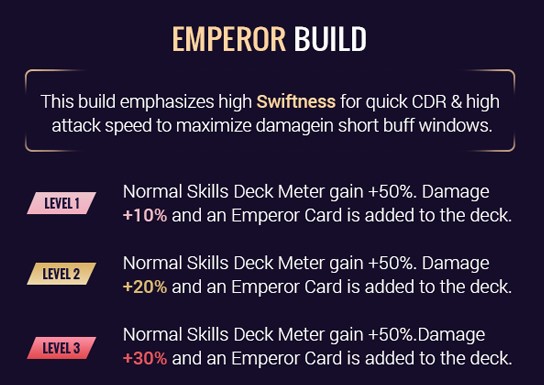 This engraving is very good for mobbing content like chaos dungeons or cubes. The build for raids with Emperor engraving utilizes high swiftness stat for quick cooldown reduction and high attack speed to be able to deal as much damage as possible in short buff windows.

There are two main builds shown below: Empress Spec-Crit and Emperor Swift-Crit. 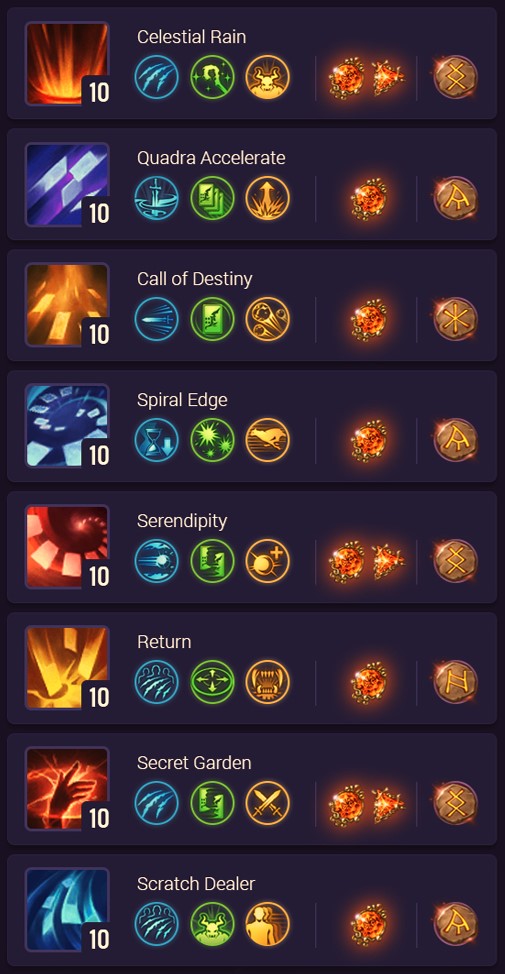 Main source of damage in this build is a ruin card explosion itself. When you hit an enemy that is marked with ruin stacks with a red skill, you will see two different damage numbers. The lesser one is a red skill damage and the harder-hitting one is the Ruin explosion damage. This is very important to understand in order to choose the right damage engravings. It is also Arcanist’s main source of stagger.

Since the red abilities themselves are not dealing much damage, you should prioritize leveling the rest of the skills to unlock more different tripods instead of leveling red skills to level 11 and 12 on character levels 55 and 60.

Here are some of the skill explanations and tripods you will take in order of importance. Make sure to level up red skills tripod levels as much as you can because it is one of the main sources of damage increase that you can utilize to make your Arcanist hit harder.

The Awakening that you should use is Null Arcane. If you have not acquired a relic gear set yet, you can save it and use it when you draw cards like Death or Twisted Fate (remember that the Twisted Fate card may not do anything at all for you). Do not forget to apply ruin stacks for before the Awakening to deal the most damage. The Judgment card effect also works on it. The Null Arcane has a very long animation lock after the cast so you should spam the spacebar to cancel it with a dash or spam the Celestial rain to cancel it with the ability cast (the Awakening damage does not remove the ruin stacks).

Use Call of fate whenever it is off cooldown to cycle through identity cards more efficiently.

If you managed to apply another 4 stacks of ruin before either Secret garden or Celestial rain came off cooldown – use Serendipity.

Basically, you stack ruin with either Scratch dealer+Quadra accelerate or Spiral edge and detonate the stacks with any red skill you have off cooldown.

The more experienced you become with Arcanist the better you will identify good card combos and rotate your skills in combat more efficiently.

Arcanist does not bring any utility for the party (other than critical chance synergy of course), only damage and pretty much of it. So we are building as much damage as possible.

Here is the engraving list in order of importance:

Keen Blunt Weapon is not advised because Arcanist has a big built-in Critical Damage buff in her tripods and sacrificing a valuable engraving slot for more Critical Damage is not efficient.

The most efficient endgame engraving setup:

At the 1445 item level you unlock the relic gear set crafting. It requires the materials from Valtan and Vykas legion raids.

The best set for the Empress build is the Nightmare set. It provides mana cost reduction and damage increase for the skills that cost mana. If you have a four-piece set bonus, make sure to use your Awakening at the start of the fight.

After the Awakening, you get the buff for the rest of the combat. This buff gives damage increase and switches to cooldown reduction and attack speed when you drop below 30% of your mana. When your mana is fully restored, the buff switches back to damage increase.

Try to utilize the “low-mana” buff for more consistent damage but make sure to have the “high-mana” buff when you get tarot cards combo like Judgment and Death/Twisted Fate for more burst damage. 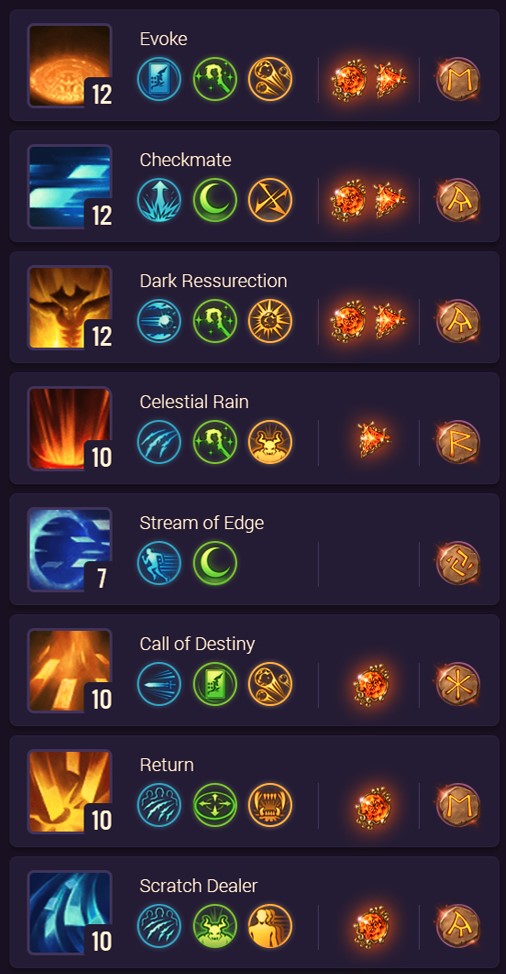 This Lost Ark Arcanist build is a version of the Emperor build for raids. It has four main damage skills and the Emperor card on top of that. Two of those skills, Evoke and Checkmate, deal damage after a big delay.

Comparing the two builds, the Emperor one is not as dependent on ruin stacks and feels more fast-paced due to high swiftness. But it is still, in my opinion, harder to play than Empress because of skills with delayed effects. You are required to hit 3 main damage skills in short buff windows and it is not that easy because of the delays.

This build is nearly unplayable without a full Nightmare relic set unless you use a food buff and/or have support in your party for more mana regeneration.

The Awakening of choice is the Eudian star. We do not use the Null Arcane here because its only purpose is to do big burst damage and without any Specialization stat the Awakening damage is weak. Use the Eudian star at the beginning for some tarot cards draws.

Do not forget to use Call of fate when it is off cooldown for more tarot cards draw.

The best set to use is the Nightmare set. Without it, this build feels very mana-hungry.

Thanks for reading our Lost Ark Arcanist guide! To learn more about other classes, check out our collection of Lost Ark class guides.