Everything You Need to Know To Watch LoR: EU Masters

Hi everyone, it’s Kuvira and Precipic here to tell you about one of the most exciting developments in Runeterra, the Masters EU Tournament.

This is part of a larger tournament series for every server that includes the best of the best players in the game at the moment.

The tournament represents Runeterra’s biggest competitive scene and if you enjoy watching competitive card games at all this is an incredibly exciting time for you. 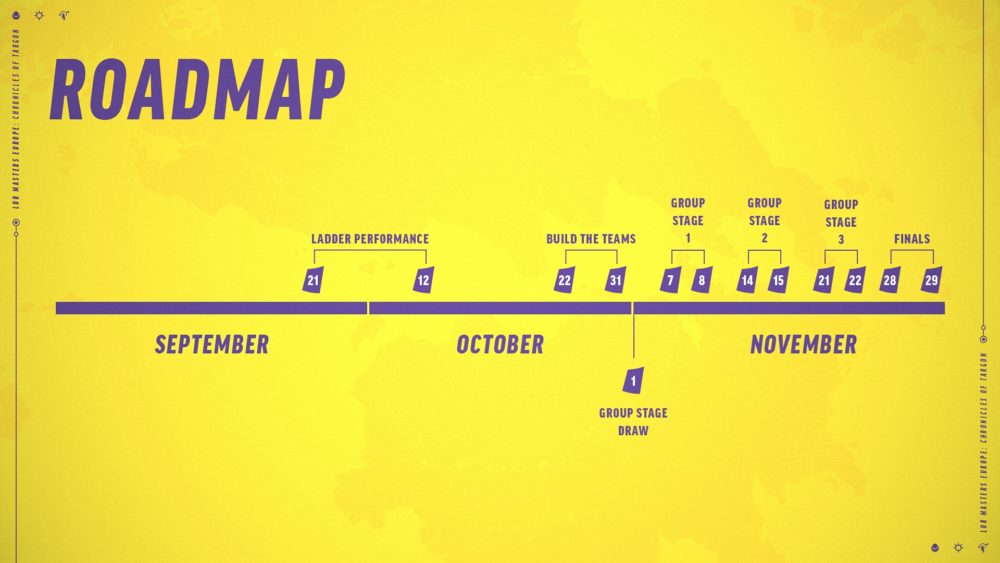 Here’s our quick guide on the format with some commentary on some of the lineups and players so far. For more details, be sure to check out the official Riot announcement.

Throughout the article, we’ll have embeds to the VODs for Day 1 and 2 of Group Stage 1 so be sure to tune in if you want to catch up on the matches.

The Format and Dates

The format for this event is really interesting. Firstly, there are 16 teams of 3 players from various countries in the EU that all work together in every game. Each team builds 9 decks and only reveals their champs.

There are no requirements for decks other than that they can’t bring more than 2 championless decks. Teams then ban 3 champions, any decks that use these champions are no longer allowed to be used for games. 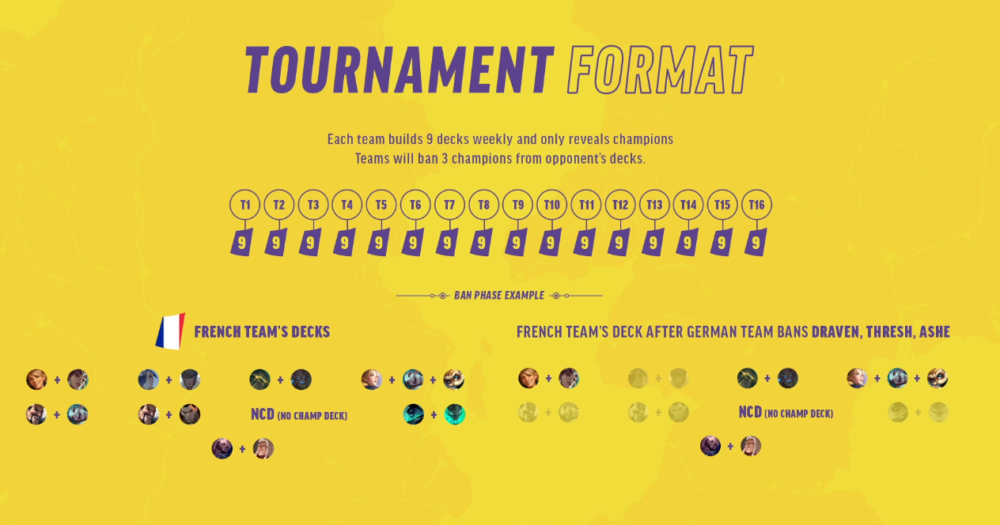 Games for this tournament will be played every Saturday and Sunday at 2 PM GMT until November 29th on the Riot Games stream.

On the 29th the finals of the EU tournament will take place where the winners will take home $15,000 while 2nd will secure $6k and 3rd will earn $3k.

To give you an example of how teams are strategizing around this format, here’s a look at some of the deck lineups teams are bringing.

These control decks are meant to beat the other slow matchups while also countering any aggro deck.

In addition to these decks, they brought 4 aggro decks: Nightfall, Darius Targon, Endure, and MF Quinn that are known for finishing games very fast.

A good example of a midrange lineup would be the decks submitted by the UK team.

This lineup is trying to counter aggro lineups with decks like Lux Leona, Soraka Tahm Kench while also being able to win against control decks with fast decks like Draven Jinx and Nocturne Diana, or with slow mirrors with Trundle Tryndamere and Anivia Shadow Isles.

Germany chose to go with a heavy amount of slow decks targeting the other control lineups by trying to win games late game. Spooky Karma, Anivia Shadow Isles, and Trundle Tryndamere represent very slow decks that are generally unbeatable in the late game.

Swain TF, Deep, and Vi Heimer are also great control/midrange decks that are a huge threat when the game goes on for too long.

The only two other midrange decks they brought are also geared to deal with control decks fairly well, with Deny in the Shen Fiora deck and the wide board pressure from Ashe Noxus.

Aggro lineups have a hard time in this format due to the lack of viable aggro decks and how easily counterable they are.

In every meta, only a few aggro decks can be good enough to see competitive play, for example, Discard Aggro, Nightfall, and Darius Targon are the only competitive aggro decks even if it’s still easy to tech against them with cards like Withering Wail or Grasp of the Undying for example.

Two players to look out for

As with any competitive tournament, there will always be certain top players to keep an eye on. Here are two of our recommendations:

Playing for Poland is, Alanzq, who is known as one of the best if not the best player in EU. Even though he’s the master of control decks ( known for Warmother’s call decks) he can still pilot any deck archetype with ease. You may recognize him as one of the contributors to our meta report tier list!

Representing Germany is a well-known tournament player with multiple tournament wins, FreshLobster. He excels at playing combo decks like Ezreal/Karma and Vi Heimer while also being very comfortable playing midrange decks like Ashe Nox and Fiora Shen. In past tournaments, he’s also been associated with using Deep decks.

There are a lot of great streams for watching this tournament series. Riot Games have a great stream setup every weekend on Saturday and Sunday at 2:00 PM GMT.

Their stream is great for people a bit newer to the competitive scene since they go into detail explaining everything going on.

If you want to get more high level insights, you can hang out with one of the members of Glimpse Beyond as our own SwimStrim is costreaming the games at the same time.