How to Play TF Go Hard

TF Go Hard is another potent deck archetype that has entered the meta since the debut of the K/DA cards.

By combining the tools from Bilgewater and Shadow Isles, you can really enable Go Hard as a reliable win condition.

In this guide, Precipic and Rattlingbones will cover the deck’s win conditions, mulligans, matchups, and more! 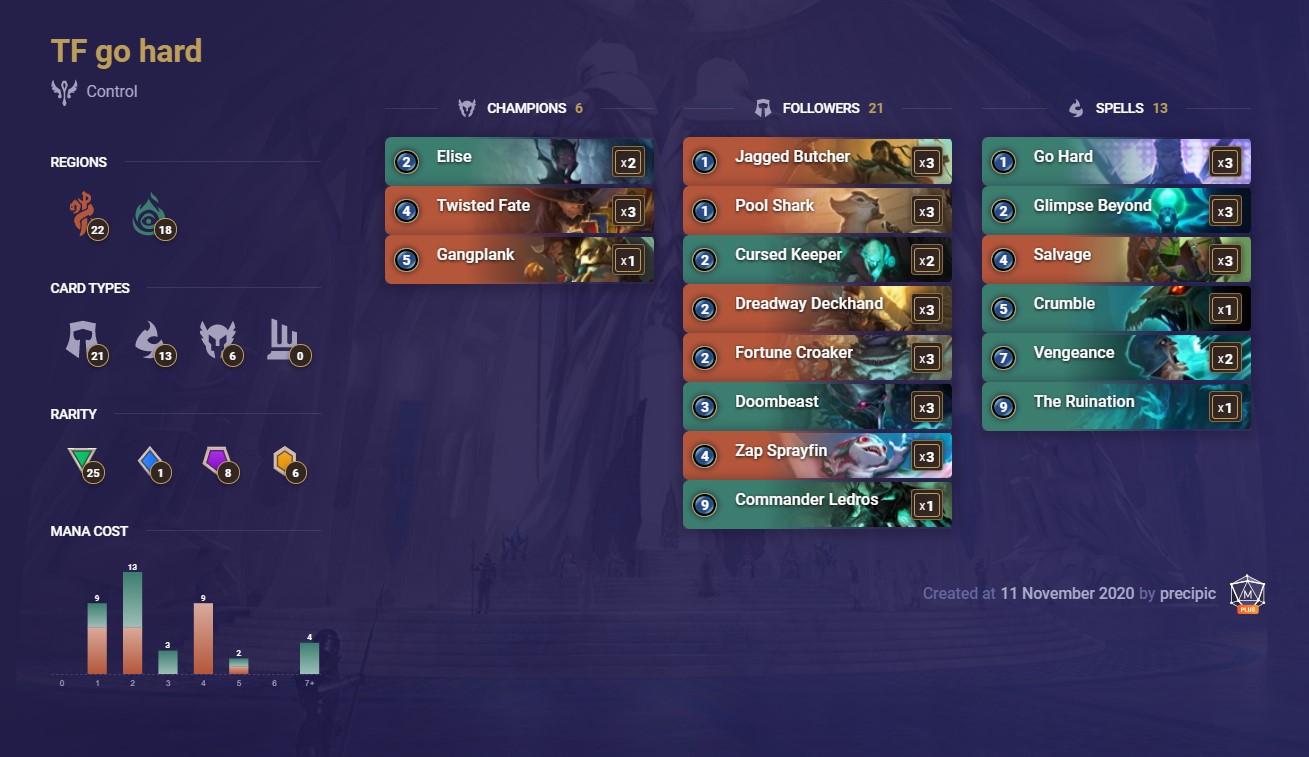 As always, if you have any questions or feedback regarding the deck, just leave us a comment below!

The goal of the deck is to slowly chip away at your opponent’s Nexus in the early stages of the game while working towards leveling the “Go Hard” into “Pack your Bags”. 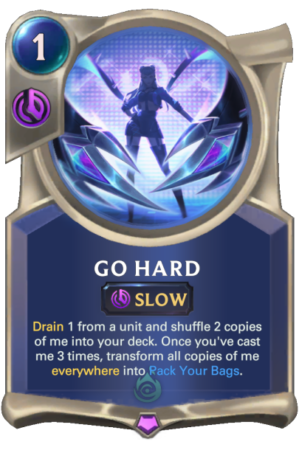 Once “Pack Your Bags” is in your hand, you try to develop a wide board before playing the card. This ensures that only one of your units gets blocked and allows for maximum damage output.

Typically, you’re able to close games out then and there. If all else fails, the deck has plenty of draw cards that allow you to get into a second round of “Pack Your Bags”.

For enabling an early Pack your Bags you have cards like Go Hard and Zap Sprayfin. In general, you should basically always keep Twisted Fate because it’s an incredibly scary card from this deck.

Other than that, you should be looking to keep cards that are super powerful in your matchup, this would mean cards like Crumble and Ruination vs Tahm Kench Soraka, Glimpse Beyond vs Ezreal decks, or Ruination vs Ashe Sejuani or Leona Diana.

The key combo of this deck is setting up a wide board utilizing Pack Your Bags to lock your opponent out of playing units. The way this usually will play out is that you will have the attack token and a Pack Your Bags in hand.

You will play units until you have six units in play and your opponent will be forced to match you.

If they don’t, they will just take a ton of damage because of how wide you are, and if they do, they will lose to Pack. It is basically a checkmate situation. As such, the deck is built around setting up this board state and Zap Sprayfin is a huge part of that. 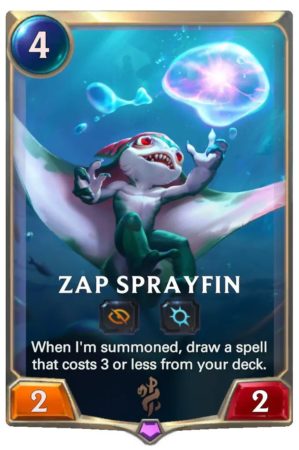 The fact that he finds your Go Hard a very high percentage of the time means that you can start shuffling Go Hards back into your deck which makes your odds of hitting Pack early huge.

Zap Sprayfin finding Glimpse Beyond is also an almost unfair combo for the deck too. Against any Ezreal deck, it is your best card in the matchup because you both deny an Ezreal level trigger and you get to draw 2 cards.

Just make sure that you are always reactive with your Glimpse Beyonds in matchups where your opponents have removal. 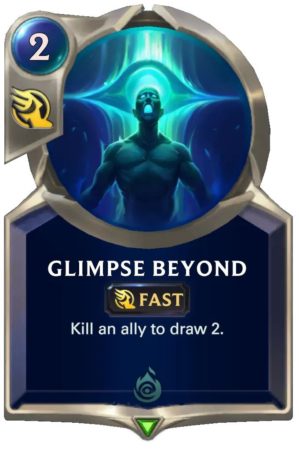 When sequencing with Go Hard, you should be thinking very very hard about whether or not your next draw is better as a Go Hard or as another spell. If I have zero card draw spells in hand, I basically never cast Go Hard if I can avoid it.

This is because you are making your future draws much worse every time you cast Go Hard because you will end up with no cards in hand but have a Pack Your Bags and likely lose that game.

However, if I have two to three card draw spells then I am casting Go Hard at the first reasonable opportunity I have because I know that I can reliably set up a Pack Your Bags without running out of steam. In general with this deck, think very hard about what you want your next draws to be before casting Go Hard. 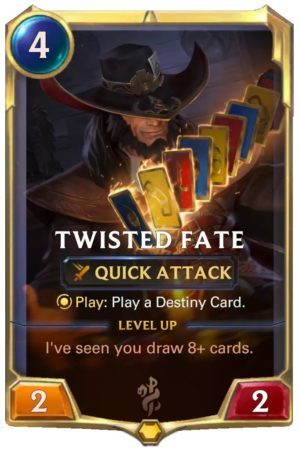 This is easily the scariest card in the deck. This deck runs so much draw that you can reliably level TF over 2 turns and a flipped TF will win even the hardest games.

In general, you should be looking to Blue card in this deck as your default mode because of the threat of it leveling and because it helps dig you deeper to your Go Hards. 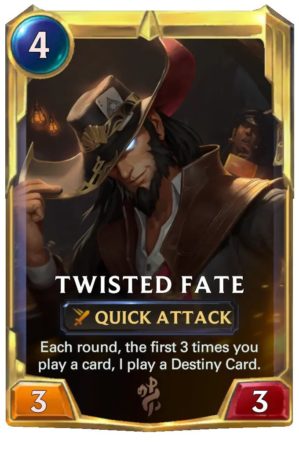 Another neat thing with Twisted Fate is that you run a good number of Kegs with cards like Dreadway Deckhand which can set up for a very powerful TF Red card to wipe most boards. 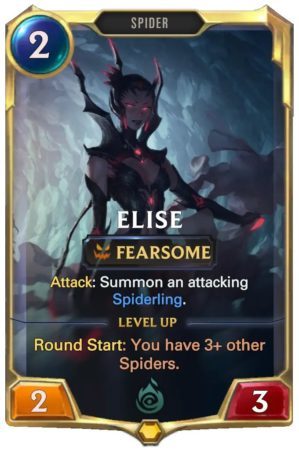 Elise happens to be one of the best 2 drop units in the game and fills a pretty neat role in the deck. There’s no other unit that’s able to consistently push damage on round 2 while generating tempo (summoning additional spiders) and enabling cards like Glimpse Beyond and Croaker.

All in all, the ability to push 3 damage and continue building a board off of 1 unit is exactly what this deck needs.

Doombeast is easily the best 3 mana unit in the game for this deck. There are a few key roles that it fills:

Crumble is just a really well-rounded (and relatively cheap) removal card with a deck that has so many cheap utility units.

Most of the units in the deck are able to generate card advantage, such as Pool Shark, Twisted Fate, Elise into spiders, Deckhand, and so on. 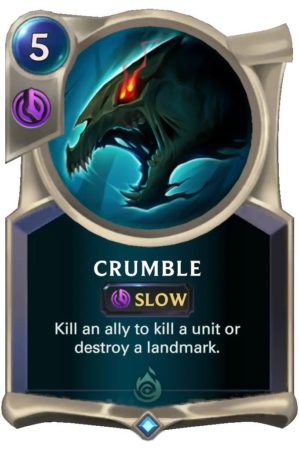 Any and all of these units are able to be sacrificed for Crumble. Last but not least, the most important factor for why Crumble is included in the deck is its ability to destroy Landmarks.

Vengeance is an interesting choice and really, it’s being played to address some of the win cons of other decks. Cards like Fiora and Trundle can really help our opponents speed-up their win cons and this deck doesn’t have an easy way of dealing with them. 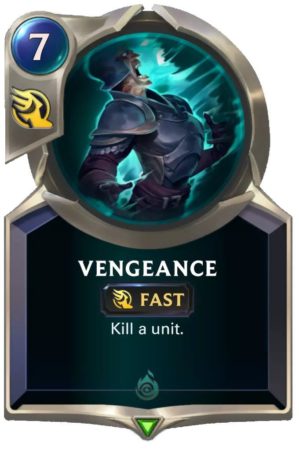 To that end, having a hard removal like Vengeance is really useful. Last but not least, Vengeance is able to punish open attacks which in turn allows us to play to our win conditions with Ruination and/or Pack Your Bags.

The Ruination is a win condition on its own. Be it vs Ashe/Sej, Tahm Kench, Shen/Fiora, and/or Feel the Rush, Ruination always finds ways of getting insane value. 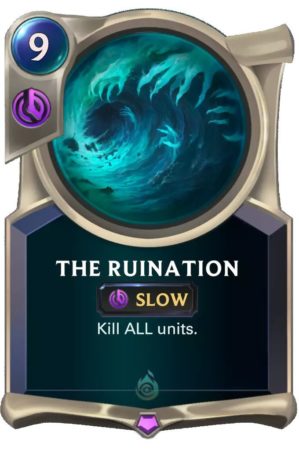 After all, we’re playing a ton of units that are able to tutor other cards and/or draw cards so we’re always able to refill the board and our hand. 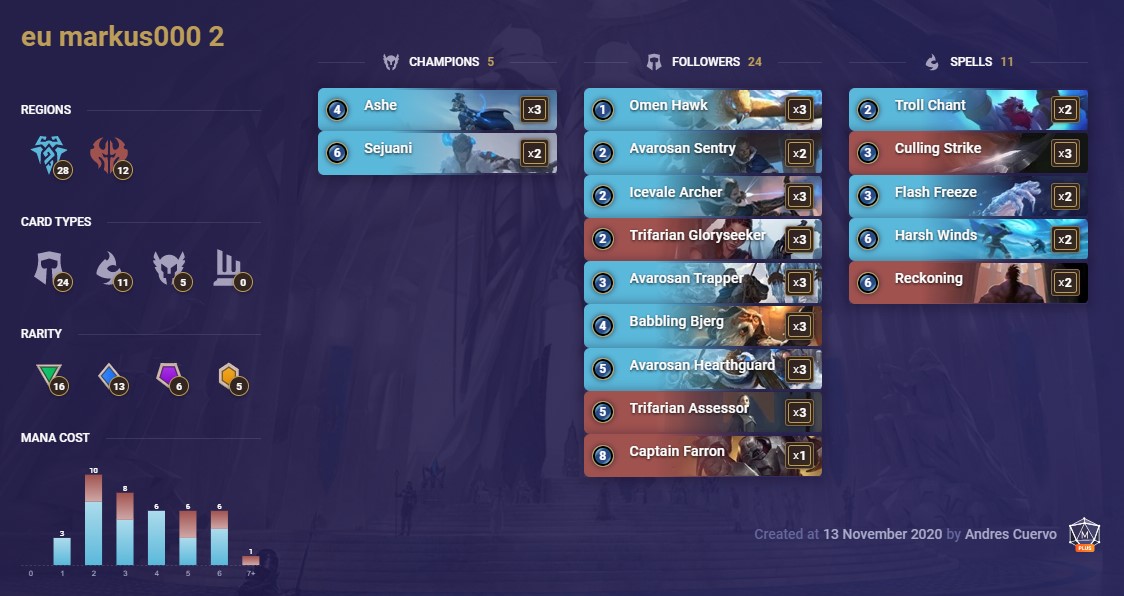 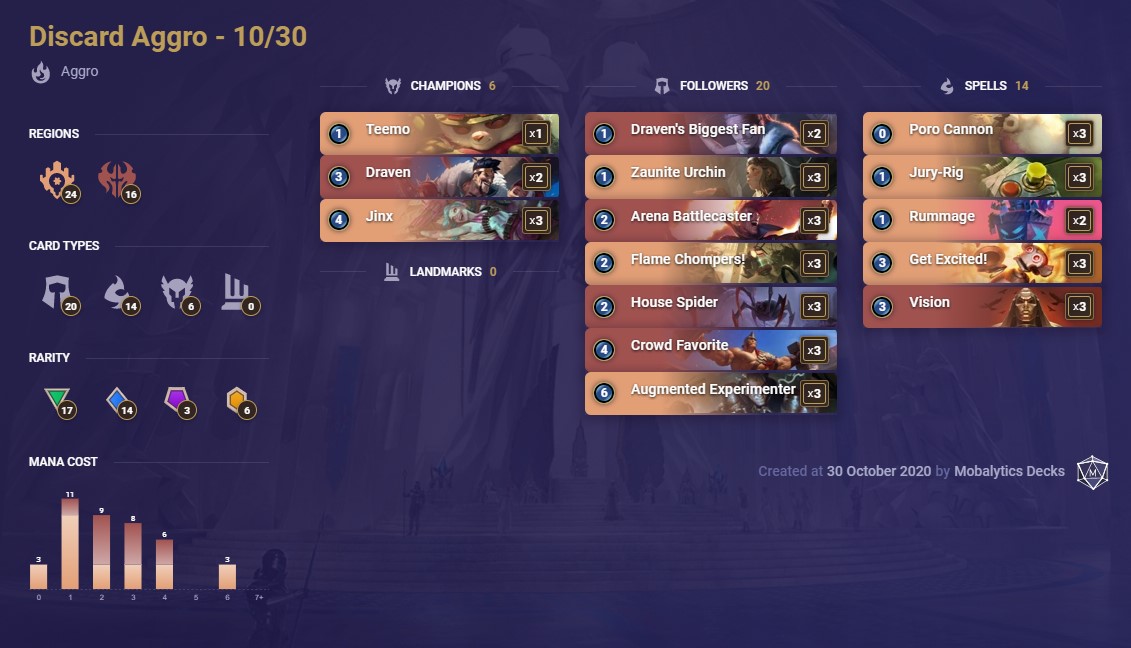 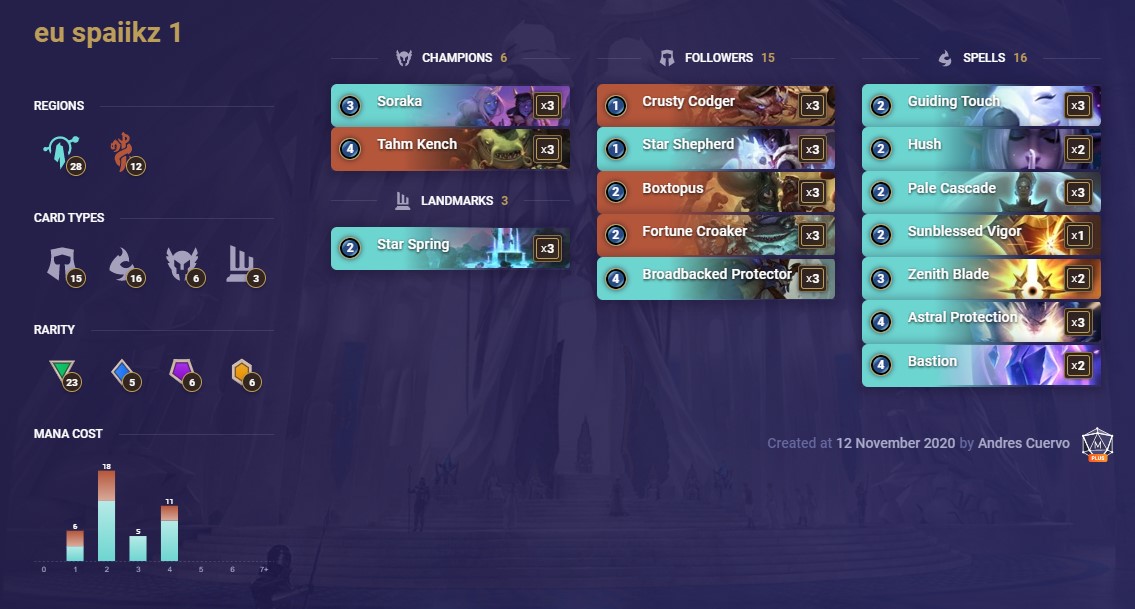 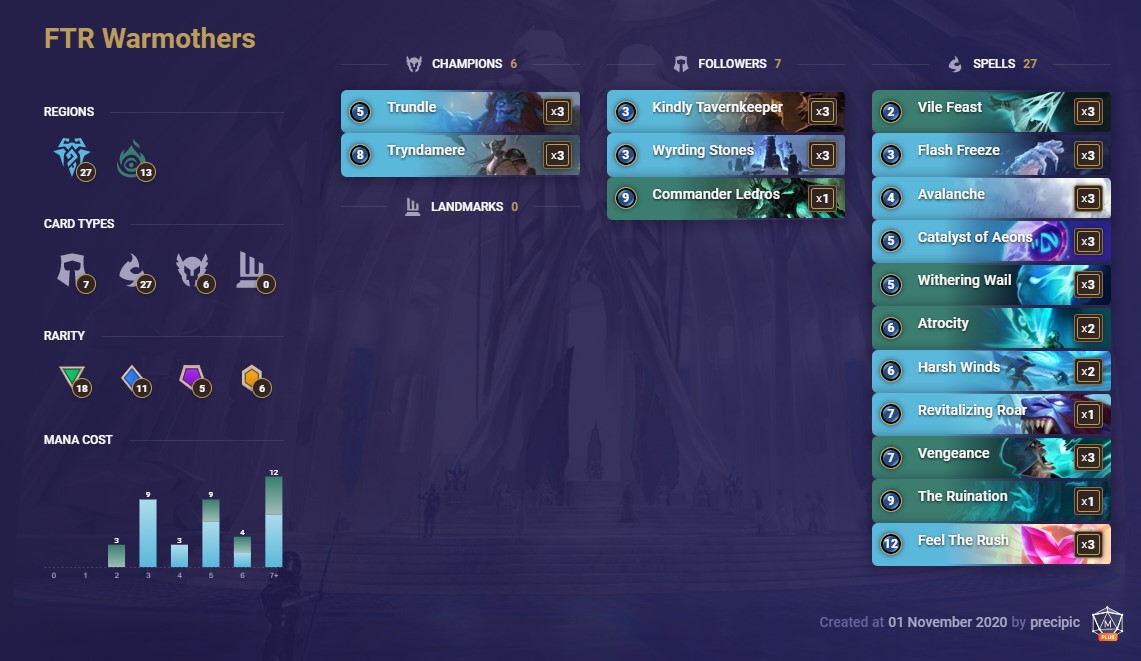