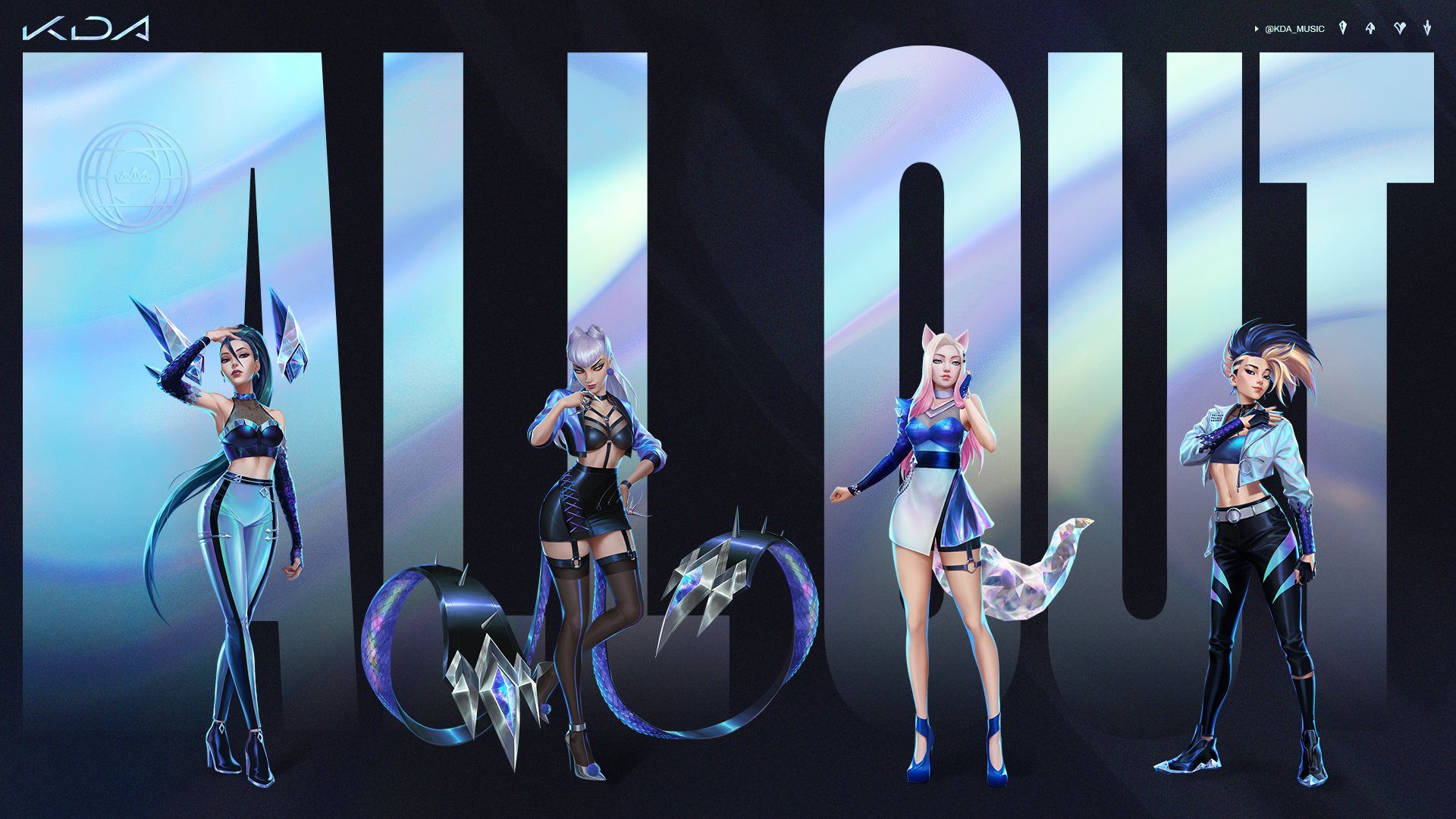 5 K/DA Deck Concepts (One For Each Card)

In Patch 1.13, K/DA themed cards joined the world of LoR – and not just for the special event, but as fully-fledged cards that are part of the official card library. 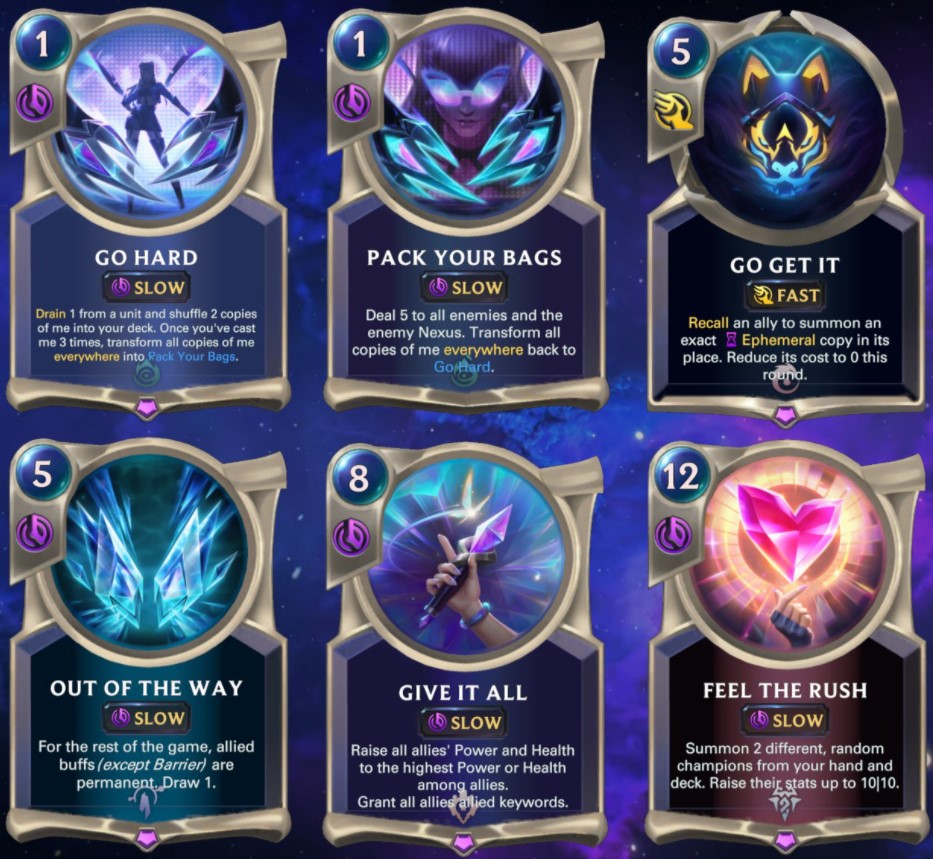 If you’re looking to try them out, our Glimpse Beyond experts, Rattlingbones and Precipic, have curated a list of decks (one for each of the K/DA cards) that they feel may be promising.

The decks will be in order by mana cost, starting from Go Hard Thresh Karma and ending with Teemo Sej Feel the Rush, they aren’t ordered by strength. 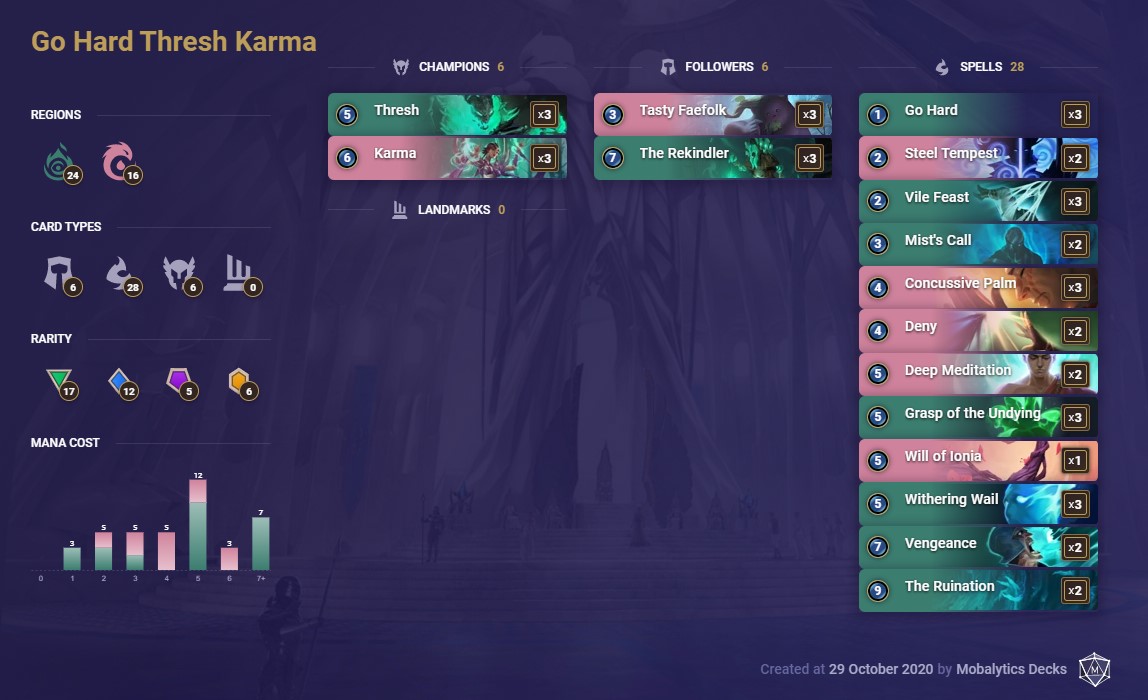 Although it was once dominant, Spooky Karma has been in the slumps for quite some time. While you could essentially rely on multiple Karmas to help close the game, you only had Withering Wail as a good AOE card to help stabilize the board. 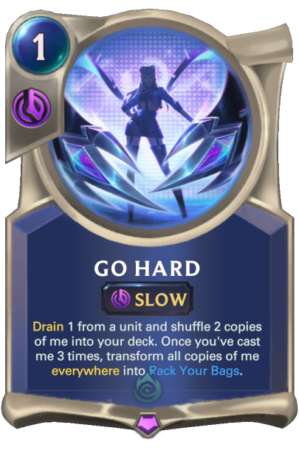 Go Hard and Pack Your Bags (the card Go Hard generates) are quite interesting in Spooky Karma since they help address this issue.

In the earlier stages of the game, a 1 mana Drain 1 can save 3+ health. And as we get into the later stages, we can do some crazy things with Deep Meditations cycling into Pack Your Bags (assuming we have leveled up Karmas in play).

Go Get it Fearsome 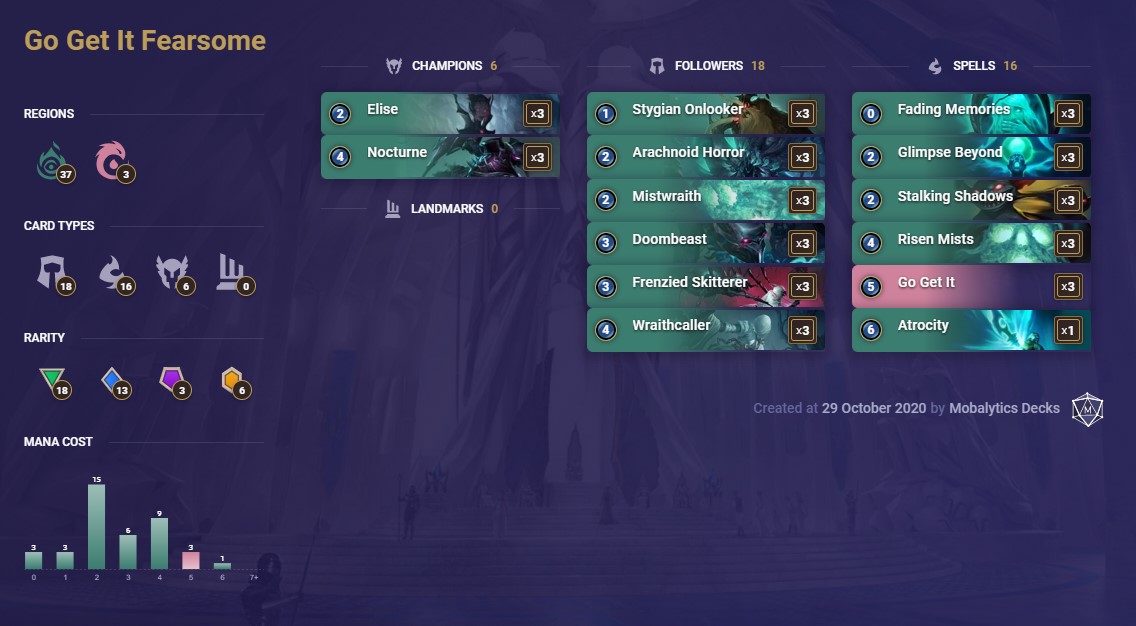 Fearsome is a powerful archetype and Go Get It has the ability to be really sweet in this style of deck.

The ability to rebuy your summon and play effects can do everything from buffing your Mistraiths to be absolutely gigantic or making your enemy’s board is completely unable to block your Fearsomes. 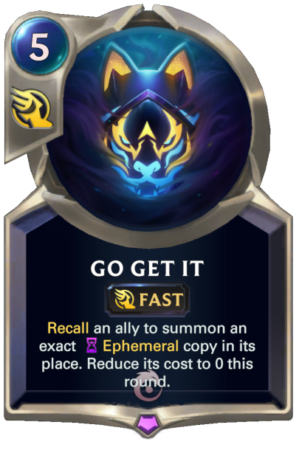 Add onto that the ability to rebuy Nocturne’s Nightfall effect and Wraithcaller’s summon effect and you have a potentially even more powerful deck.

Out of the Way Lucian Leona 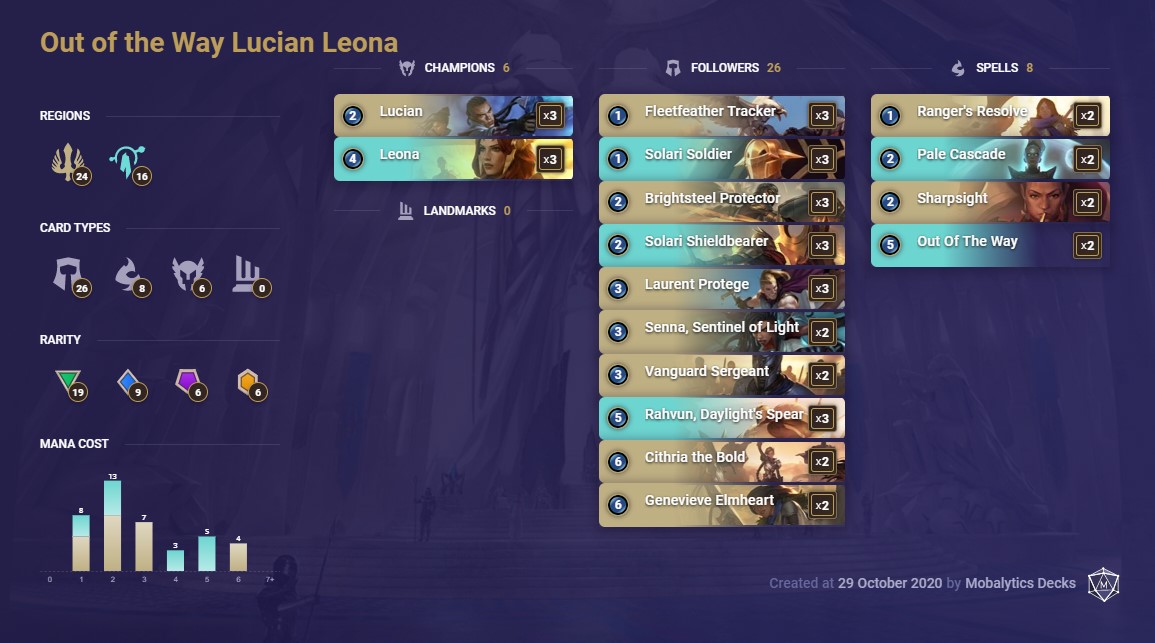 [See Out Of The Way Lucian Leona deck details]

Out of The Way is definitely one of the harder cards to build around, we think it has potential with Lucian and Leona.

This deck looks to utilize some big board buffs from For Demacia! off of Vanguard Sergeant or the +1/+1 and Fearsome buff of Cithria the Bold and make them permanent using Out Of The Way. 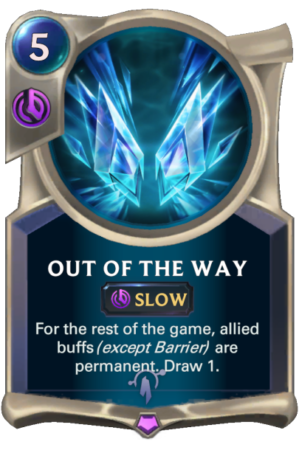 Daybreak cards also work quite well with this effect since they get to keep them after the turn they are played.

Add onto that smaller buffs like Ranger’s Resolve, Pale Cascade, and Sharpsight, and you have a solid home for Out Of The Way.

Give It All Heimer 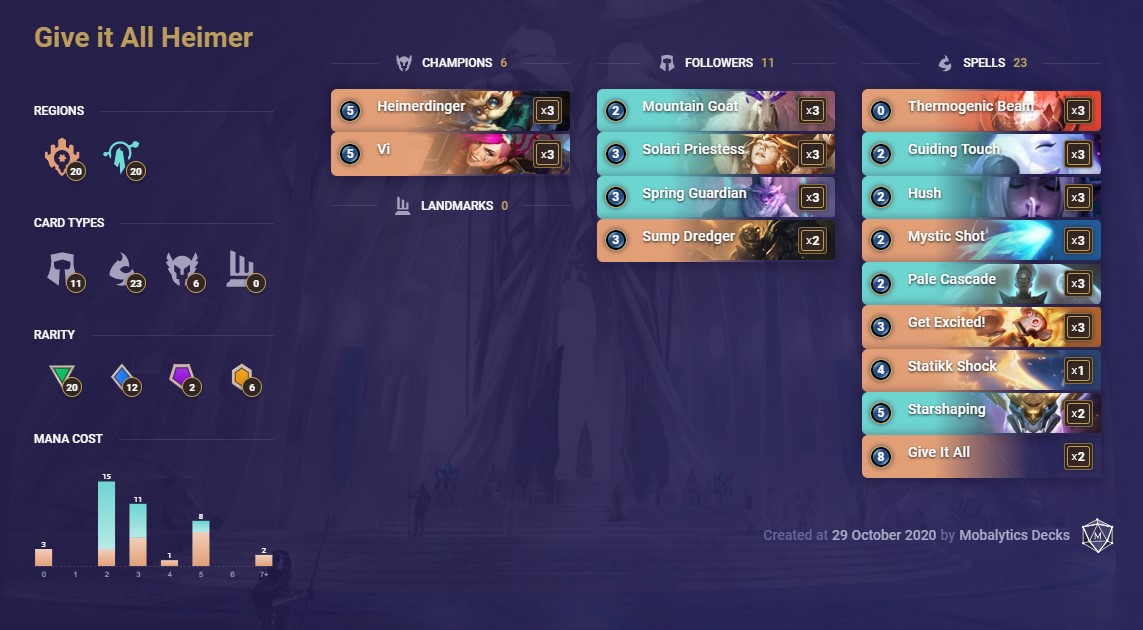 [See Give It All Heimer deck details]

Veimer has been performing really well in Masters as of late. It’s consistent, doesn’t rely on any flashy plays, has plenty of removals, and can go the distance. Now, however, they have an insane finisher with Give It All! 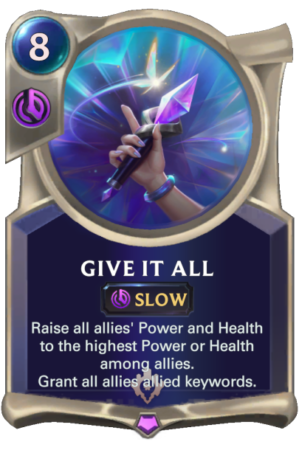 With the new KDA card “Give It All”, you can essentially buff your entire board by:

When these possibilities are considered, Give It All becomes a potent inclusion in Veimer. 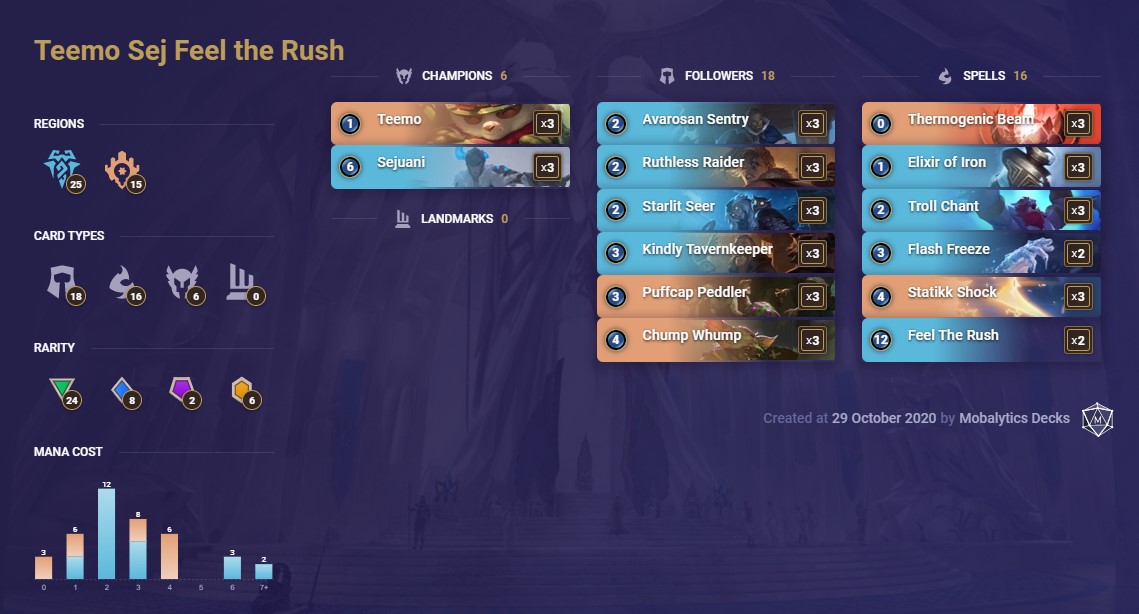 Teemo Sej is a deck that may benefit the most from Feel the Rush. The ability to make a 10/10 Teemo and Sejuani in one action is kind of nuts, especially because at that point in the game, both of them are likely leveled and therefore have the ability to Frostbite the opponent’s board.