How to Play 4 Interesting Deck Concepts from EU Masters

We recently published a new viewer’s guide on how to tune in to the EU Masters tournament that recently started and will continue throughout November.

In this article, Kuvira and Precipic will be highlighting four interesting concepts that were brought by different teams: One Maokai Undying (Czech Republic), Soraka Braum (Norway),  Elites (Italy), and Taric Lux (Poland).

For each deck, we’ll be covering the reasoning behind bringing it to the tournament, how it works, and why you should try it out yourself! 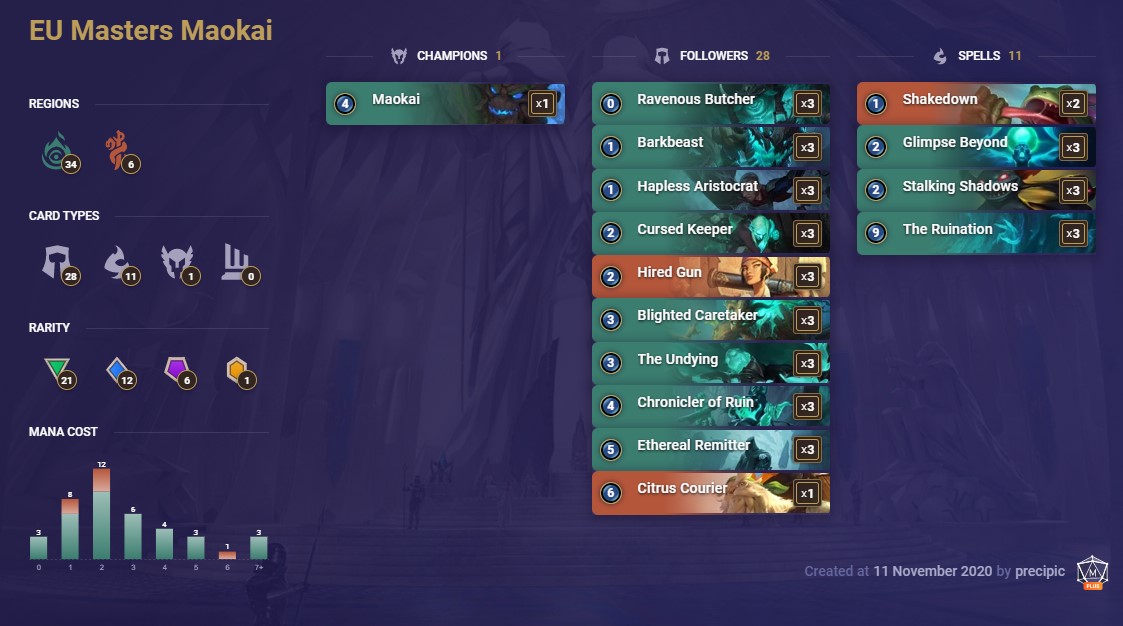 Why the Czech Republic brought it

The idea behind this deck is to have a favored matchup against control decks like Trundle Tryndamere by using the pressure from early game units like Cursed Keeper, Ravenous Butcher, and Barkbeast while staying safe from The Ruination by using The Undying in combination with Chronicler of Ruin and Ethereal Remitter to create more copies and bigger copies of The Undying.

This deck also does very well against aggro because of the low mana cost units like Hapless Aristocrat and Barkbeast along with removal tools like Shakedown and Hired Gun.

The deck can struggle against midrange but setting up a good turn for The Ruination can still help you win games.

You really need to find Undying for this deck to work. Look to mulligan super aggressively for it or use tools Stalking Shadows to help draw for it.

Ideally, you want your Undying to die as many times as possible with cards like Shakedown, Ethereal Remitter, Glimpse Beyond, or Chronicler of Ruin.

In general, you are looking to swarm the board as quickly as possible and then when your opponent over commits to answer your board, you play The Ruination and then kill them with your giant Undyings.

Cards like Shakedown are also really powerful ways of dealing with big units once you have giant Undyings.

I would recommend playing this deck if you wanted to have a swarm of unkillable giant units.

Beyond that, getting value off of cards that require to kill units like Chronicler of Ruin or Ethereal Remitter is super sick. 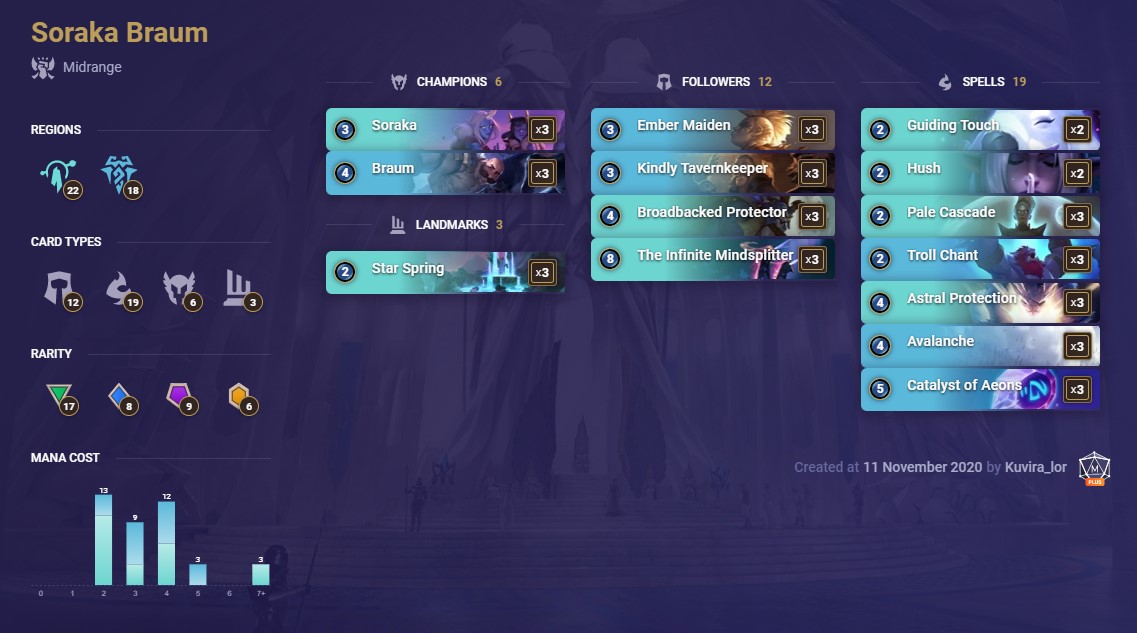 Why Norway brought it

This deck is geared to deal with aggro decks pretty easily since Soraka and Braum are two of the best champions for stopping any type of board pressure.

Cheap removal cards like Ember Maiden and Avalanche are also very useful for controlling the early board.

With The Infinite Mindsplitter and Hush, the deck also has ways to beat midrange matchups like Lee Sin/Zed decks.

When playing this deck against aggro you should be looking to keep cards like Ember Maiden, Avalanche, Broadbacked Protector, Kindly Tavern Keeper.

Against basically every other matchup you need Soraka and preferably Star Spring or you can’t really win.

The general game plan is to just board clear your opponent every single turn and gain a pile of life in the process. Eventually, you will win off of Star Spring or draw a ton of cards off of Soraka.

If you despise losing to aggro give this deck a shot. I don’t think aggro decks can actually beat this deck.

There is just too much healing and removal to effectively stop it. It is also super fun to see your Ember Maiden get healed up by Star Spring so it continuously pings the entire board. 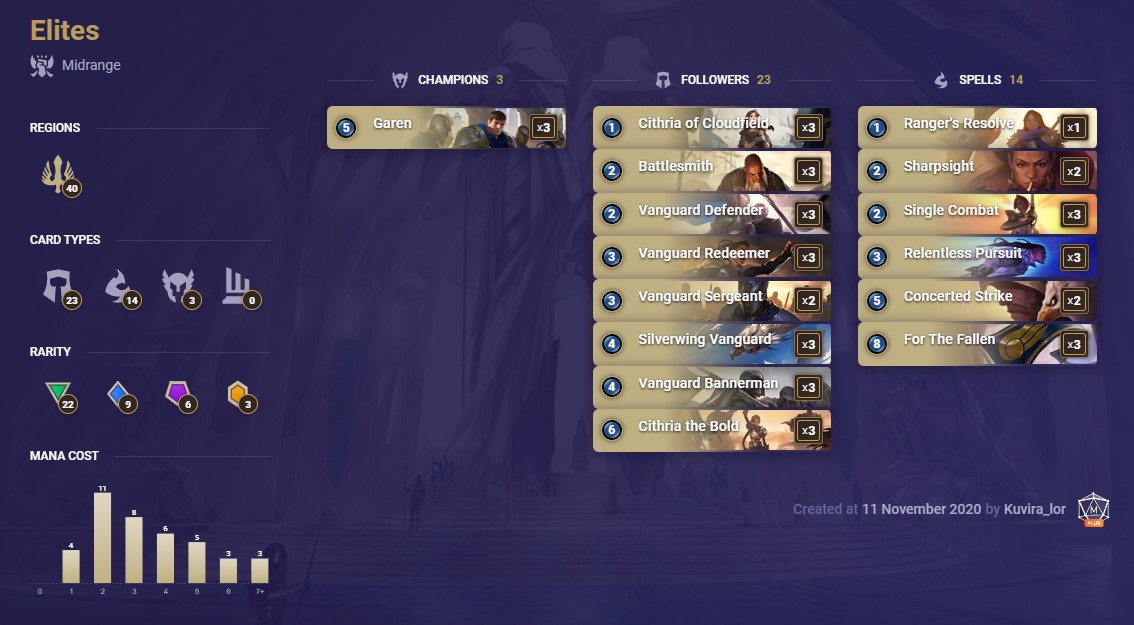 Why Italy brought it

This is a classic midrange Elites deck built to win the board against other midrange decks by playing on curve and buffing all units using Battlesmith, Vanguard Sergeant, and Cithria The Bold.

It also deals with control decks easily because of the board pressure when combined with Relentless Pursuit.

For The Fallen allows you to rebuild a full board when the opponent plays The Ruination, which is a popular removal tool right now.

There are two things to focus on for the curve of Elites. The first is drawing a curve of 1 drop, 2 drop, into 3 drop, and the second is drawing your Elite payoff cards.

For basically every matchup you need to have this curve and you should be mulliganing aggressively for that but in slower matchups, you should be looking to keep For The Fallen if you have a curve.

In general, this deck is pretty simple to play, just try to use all of your mana every turn and play the biggest board you can possibly play every turn.

Because of For The Fallen, board wipes aren’t as scary for you so just continuously develop your board no matter what.

I would highly recommend playing this deck if you just want to continuously play giant dudes every turn and don’t want to have to worry about board clears.

If you draw Battlesmith on turn 2 and they don’t have an answer to it, you have a very good chance of snowballing. Take your opponents down in the name of Demacia! 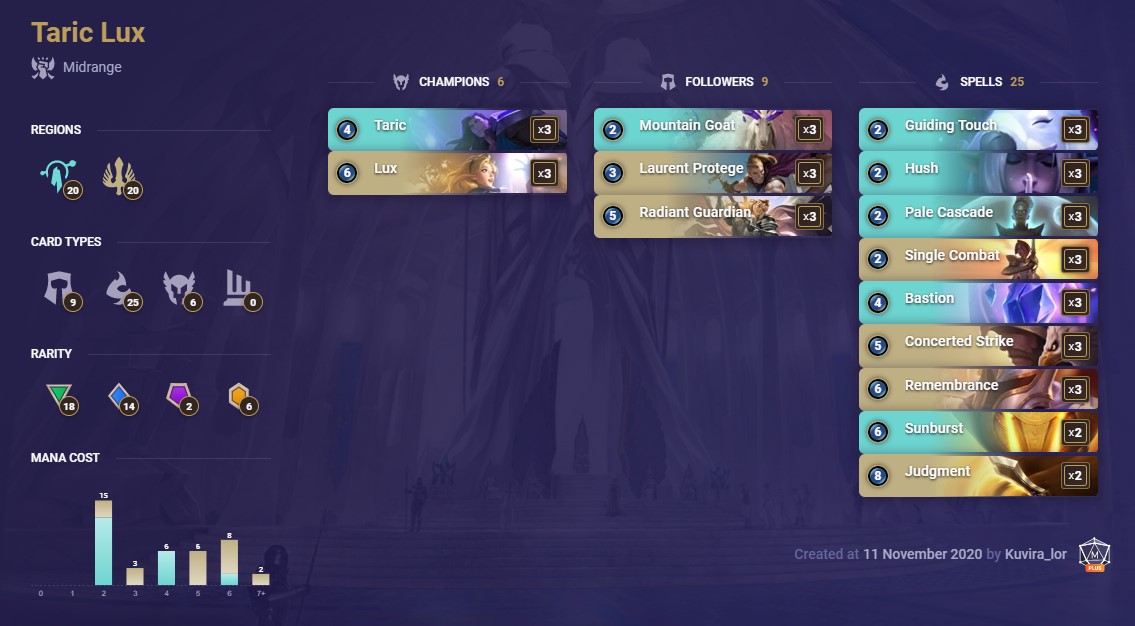 Why Poland brought it

Units like Mountain Goat, Laurent Protege, and Radiant Guardian are there to deal with aggro matchups pretty effectively with the help of Guiding Touch and Sunburst.

Combat tricks like Single Combat, Concerted Strike, Judgement, and Pale Cascade allow you to never lose control of the board.

However, keep in mind that this deck wasn’t brought to target control decks and will struggle against them.

In general, this is a turn 3 Remembrance deck. Against most matchups, you should be looking to pass the first 2 turns of the game and then play Remembrance on turn 3 so that you have the biggest unit on board.

Mountain Goat and Laurent Protege are pretty good alternate early plays vs aggressive decks. I would also recommend keeping Radiant Guardian against every aggressive deck and Lux vs all the slower decks.

You should generally be looking to go to the long game so you can land a Lux and start generating Final Sparks off of her. There are some matchups where you want to play a bit faster but in every case, you just want to try to outvalue them.

There are some cool synergies like using Bastion on Taric with Lux out to get a Bastion on both your Taric and your Lux which then gives you a Final Spark, or using Laurent Protege’s Challenger to get a guaranteed Radiant Guardian.

This deck is sweet because you get to use really big units that you can spam buffs on with Taric out.

Then, when you have Lux out, you can just fire your Laser Beam on every unit on the enemy board. Overall, it’s a pretty cool slow midrange deck with a unique win condition.