5 Tips to Improve your Initiative in League of Legends

How to Improve your Initiative in League of Legends

Having good initiative in League of Legends is a skill that makes or breaks a player. If you have good knowledge and good initiative, you can gain a lead and increase it: and continue expanding it until you win the game.

I’ve been playing in lower ELO’s lately, and it’s amusing seeing players running around like a headless chicken not knowing what to do (not literally funny, but you get the point). This guide will help you optimize your plays.

In this Mobalytics guide, we will break down a few ways to improve your initiative and help you gain a lead in League of Legends.

What is initiative in League of Legends?

Initiative in League of Legends is your ability to gain small victories over the enemy and your ability to get things done. For instance, getting kills in lane, taking towers, securing objectives and getting tower plates.

Some champions rely heavily on you getting a lead in the early game to carry in the mid-game such as Lee Sin, Tryndamere or Darius. Having good initiative on these champions in particular, will make the mid-game so much easier for you.

Champions who need good initiative include:

Renekton is a lane bully and can quickly get kills if he can jump on to the enemy. Look for trades frequently and play around your Fury bar to empower your basic abilities. Renekton needs to win lane, so look for fights whenever you can. Furthermore, once Renekton unlocks his Ultimate, he can become one very, very scary.

Master the Crocodile with Renekton’s champion page. Learn his builds, combos and much more.

Tristana is usually seen as a monster once the game gets going, but she is highly volatile in the early game. Use your W aggressively once the enemy wastes an ability, oversteps or when they have taken poke damage from your Support. Tristana can snowball easily if she can get a kill or two in the early game.

If you “need a point in the right direction,” learn the ways of the Yordle Gunner with Tristana’s champion page, where you can see who she is good into and bad against.

Zed doesn’t get many kills pre-level 3, but he can quickly become a nuisance once he has some levels behind him. Look to poke the enemy down with your basic abilities and your W, then look for kills. Post 6, he can get more kills just by rinsing and repeating this method.

Learn to one-shot the enemy with Zed’s champion page.

How to improve your initiative

To improve your initiative, you must understand the stats related to your performance.

With these stats in mind, you can see how good you are at playing your champion to its fullest potential and getting a lead and snowballing it.

1) Make the call for the Rift Herald

Making the call for Baron, the Rift Herald, or Dragons is a great way to increase your lead. They can be pretty hard to take, but with multiple members of your team focusing them down at once, they should be a piece of cake.

There are many different opportunities where you can take one of these objectives. These include but are not limited to:

Don’t be afraid to make these calls as you’ll find yourself being able to take them uncontested. However, when attempting to take the Baron or Elder Dragon, you need to have extra precaution as losing this objective can cost you the game. Avoid going for 50/50 objectives in the later parts of the game if you can.

Here’s a separate guide on how to secure the Baron safely in League of Legends. The information will help against the Elder Dragon too!

2) Learn how to manage waves

If your enemy is cowering in fear because you’ve built a lead, look to push up and chip away at their tower. However, you still must remain diligent. Cover your flanks and the river with wards because the enemy Jungler will be looking for you if you’re pushed up! If you’re struggling to place enough wards yourself, don’t be afraid to ask your Jungler for assistance with warding around mid.

Smart players think ahead several plays. For example, if you push your opponent under the tower and the wave is stacked, you can create an opportunity knowing the Jungler isn’t around. Instead of harassing your opponent, auto the tower to chip away at it. By doing this, if you do kill your lane, you will likely be able to take the tower right after, giving you an even bigger advantage.

To create big waves and to push them into the enemies tower, you’ll need to understand wave management. Unfortunately, wave management is really, really complicated, but we’ve made an in-depth wave management guide that will go into great depth on how to effectively manage waves so you can make plays like the ones suggested above.

3) Play around your champions power spikes

You can only learn your limits if you push your limits. Practice being more liberal looking for all-ins during the laning phase, and take note of your level and current items. Looking for these opportunities helps develop a deeper understanding of match-ups, but the price of learning will always cost you a few games—a small price to pay in the long run.

Here is Zed’s power spikes during the early, mid and late game.

Here are some of Zed’s power spikes and some advice to play against them.

There are many different power spikes you can play around. For example, hitting level 2 or level 6 before your opponent and using the level and ability advantage to go for a kill. You may wish to play around with item advantages too. If you want to learn what other power spikes a champion might have, check this guide on champion power spikes out!

You don’t always have to follow your opponents roams. It’s a perfect opportunity to push the lane hard when your opponent leaves the lane. Punish them as hard as possible by reacting immediately to their rotation. Make sure to keep a mental eye out for where the enemy Jungler could be and if you can deal with him if he shows.

In matchups where the enemy is playing really safe, you could look to roam and help your allies out. A good time to roam when playing Alistar or Leona is straight from the base. You can use these pathing suggestions to make roaming from the base a lot safer. 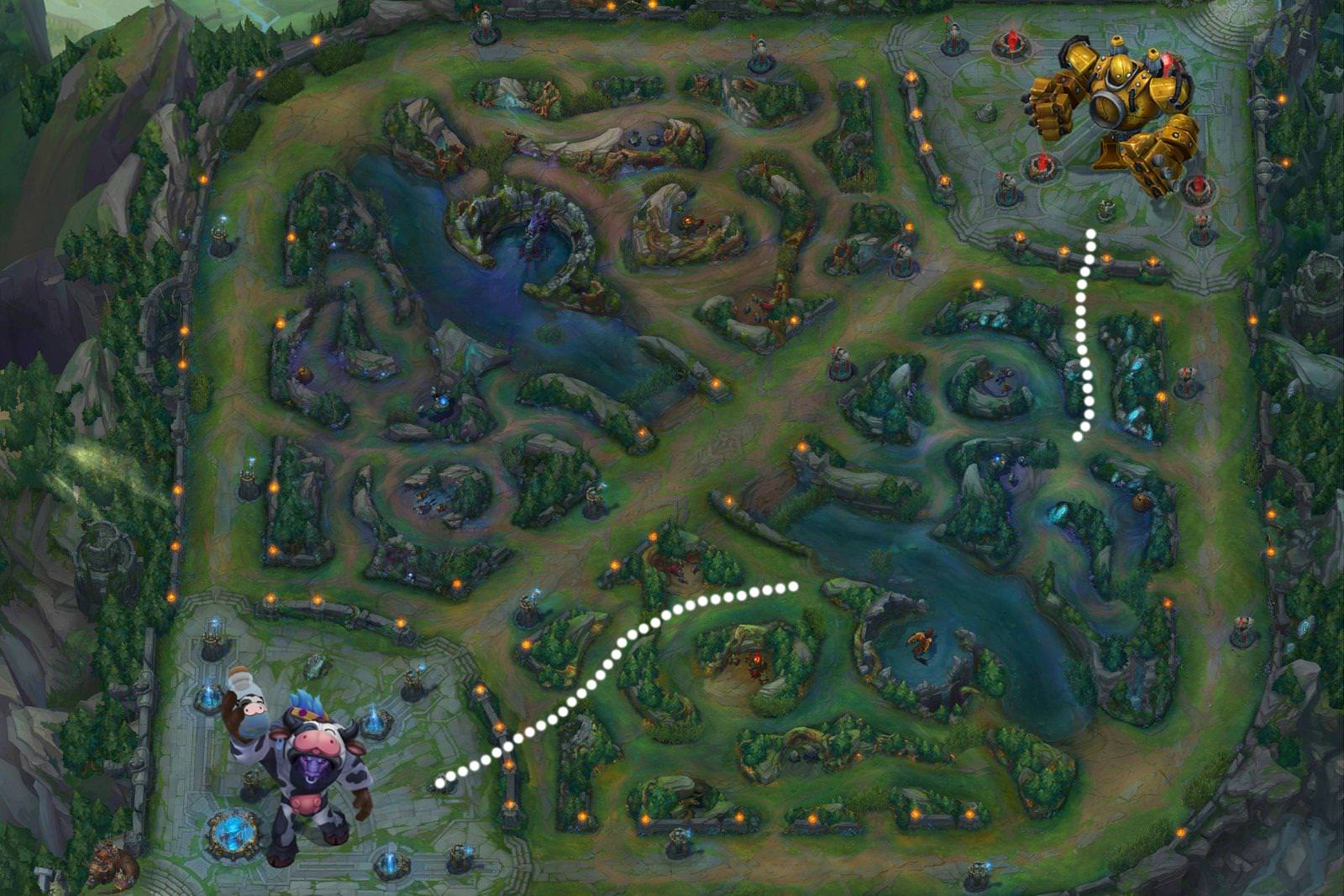 If you want to learn more about countering roams, or initiating roams, then give our in-depth roaming guide a read. It will break down everything you need to know.

5) Optimize your combos and damage output

Getting the most damage out in the shortest amount of time is a great way of improving your initiative. When you master combos, you optimize your damage output, increasing your chances of getting kills in the lane. For instance, if you’ve practised your Alistar combos, you can consistently get picks and start skirmishes with the enemy.

An Alistar combo example. Find more combos for Alistar on his champion page.

The best way to optimize your combos is by learning what combos your champion has. Go to Mobalytics champion pages and look at your favourite champion. From there, you can see some of their combos and videos to go with them.

Head into the Practice Tool and try to re-enact the combos one by one. Taking some time out of your day to practice them will be very beneficial, and after some time, you will be able to perform them flawlessly in actual games.

If you’re not exactly sure what’s the best way to practice and master combos, I would recommend checking out this guide on how to learn and practice combos.

Taking action is required if you want to improve in League of Legends. You cannot always play reactively, and you will need to make decisions that can either win you or lose you the lane in seconds. As long as you start making these calls or making these plays, you’ll find yourself climbing in the long run.