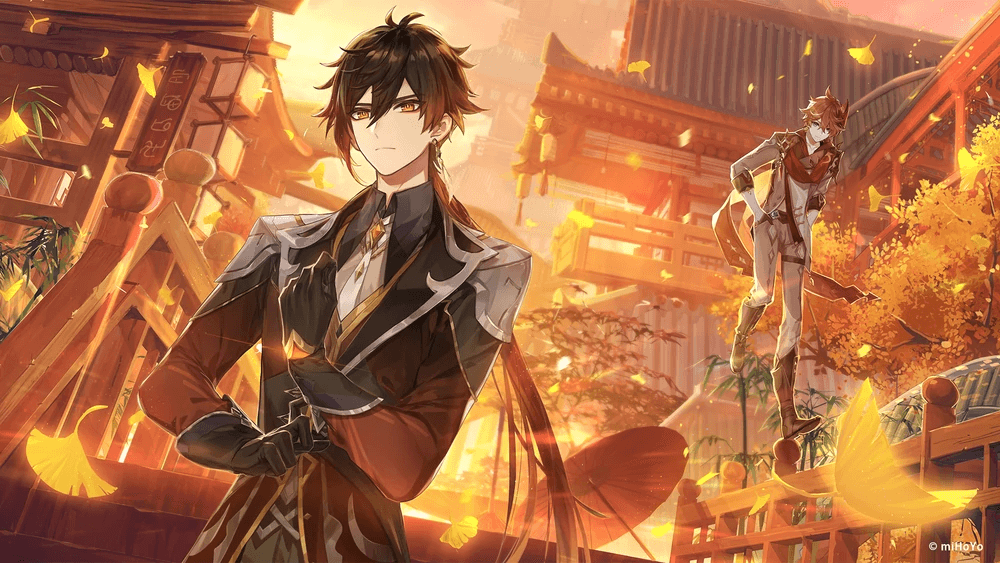 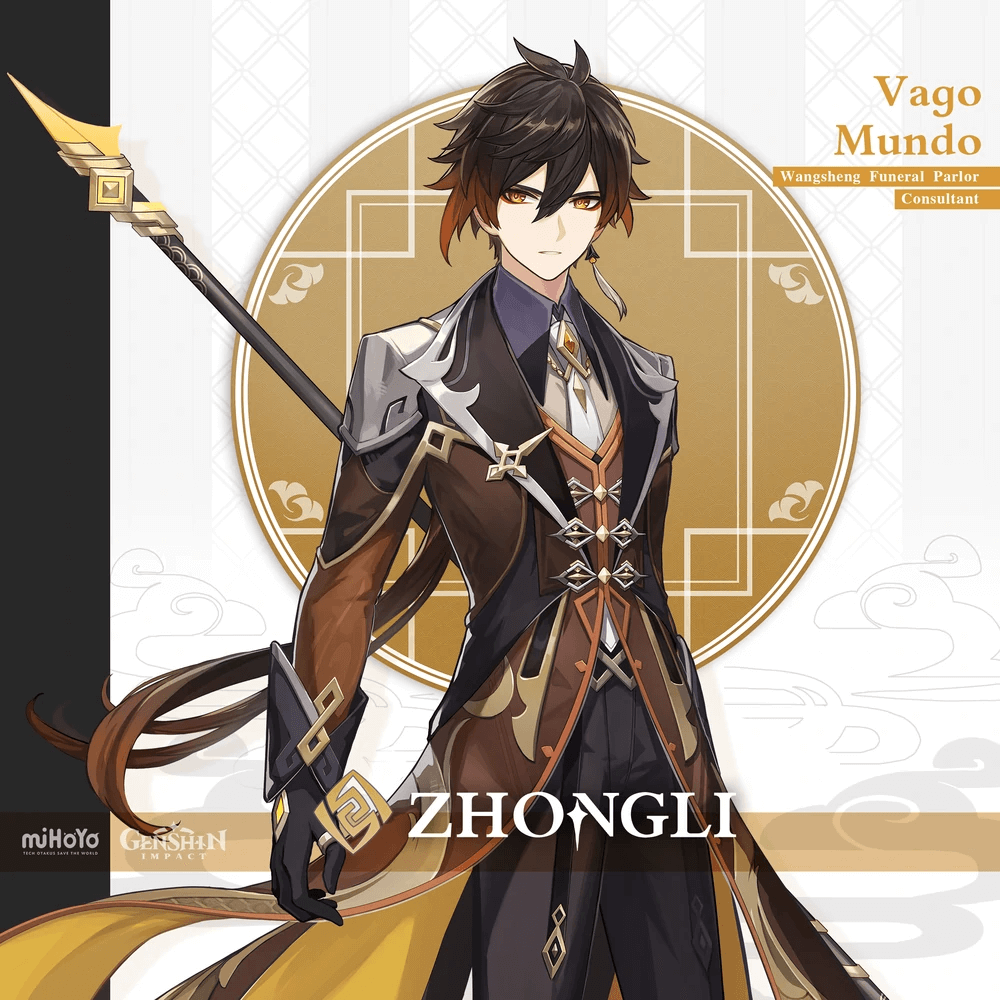 In this article, I’ll be going over everything you need to know about Zhongli, including his playstyle, best artifacts, weapons, teams, and more.

Recommendations and overall value of the character is under the assumption that players have limited primos. Obviously if you like the character/have spare primos, roll them if you want! This guide encompasses all content so keep that in mind as well when you decide what you want Zhongli for before you roll.

This is a pretty straightforward 6 hit normal attack sequence with cool animations. Only thing worth mentioning about it is that they’re quite fast with multi hit instances on the 5th hit. This is something to keep in mind for situations when presented with the ability to reliably proc things such as Favonius or even functioning as a pseudo driver.

Zhongli’s most valuable part of his kit by far and can be pressed, or held.

Press – Places a pillar that functions as a geo construct and ticks of AoE Geo DMG. The pillar can resonate with multiple geo constructs at once (Albedo skill, Ningguang skill, etc.) increasing the AoE, potentially increasing the instances of geo damage provided they hit. Pressing does no initial damage.

Hold – Releases a quick burst of AoE Geo DMG and places the aforementioned pillar with the same qualities if it hasn’t been already placed. It also creates a shield that scales off of his max HP as well as greatly increasing interruption resistance and providing 20% elemental/physical resistance shred in a small AoE by whoever is protected by the shield.

This is by far the best shield in the game and provides ultimate comfort in combat. The pillar also has a 50/50 chance of generating a particle provided it is hitting enemies.

However, it is worth mentioning that his burst has a significantly long animation, resulting in a DPS loss in most scenarios. So it is not recommended to incorporate his burst in timed content/rotations unless as a last resort.

Since Zhongli is mainly an off-field support he doesn’t really have combos worth mentioning.

As you ascend Zhongli, he will gain Geo DMG Bonus.

Resonant waves: When the Jade Shield takes DMG, it will Fortify:

Fortified characters have 5% increased Shield Strength.
Can stack up to 5 times, and lasts until the Jade Shield dissapears.

This passive is quite valuable in a sense that it makes Zhongli’s HP scaling synergize even more with his kit than it already did. The most significant part of this passive is the DMG increase of his burst, making it hit even harder when optimizing for burst DMG.

Arcanum of Crystal: Refunds 15% of the ore used when crafting Polearm-type weapons 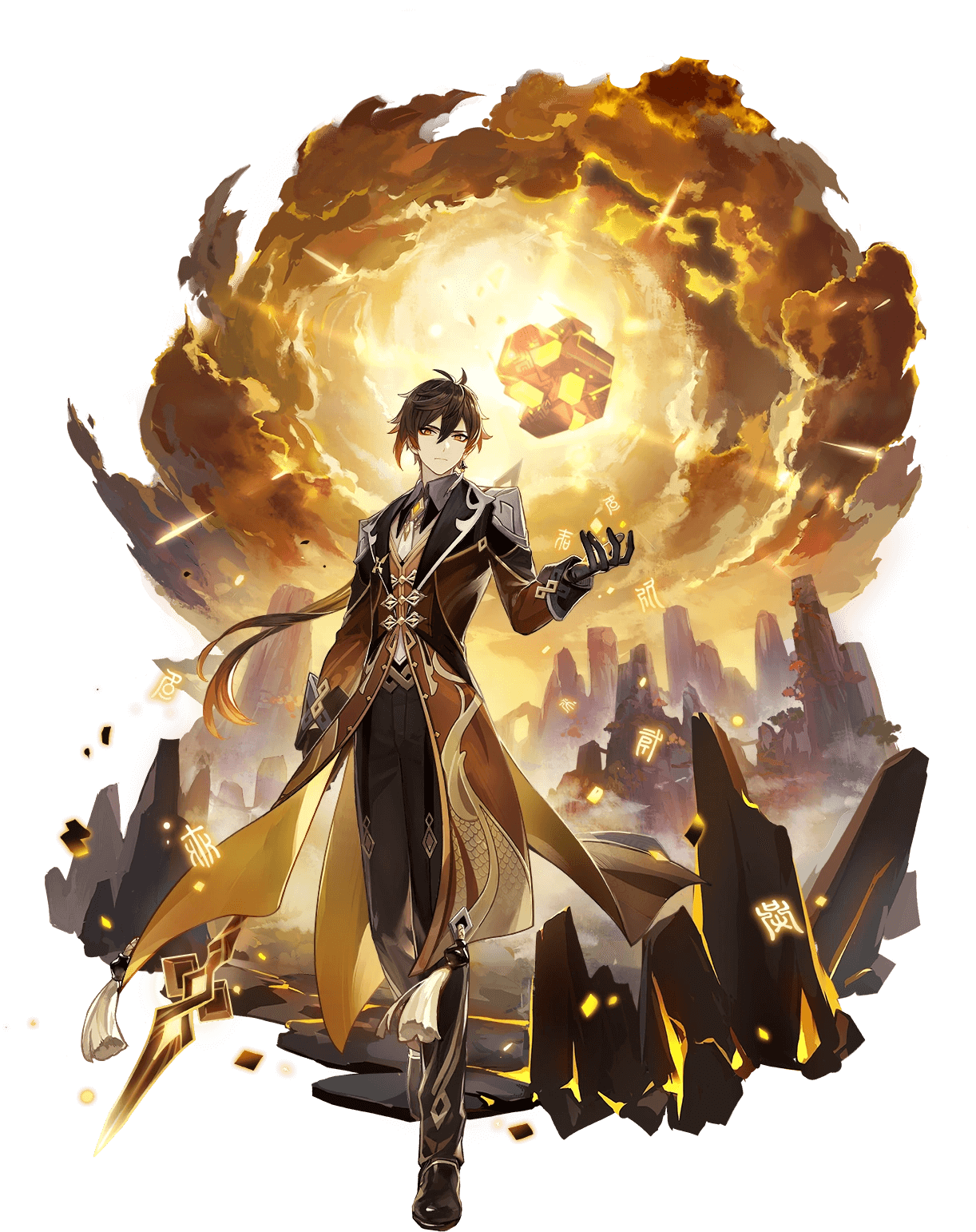 Constellation 1: Rock, the Backbone of Earth

Increases the maximum number of pillars created by his skill that may exist simultaneously to 2.

Very useful constellation as it can allow you to have more reliable energy generation due to having 2 pillars effectively increasing the chances to produce particles. It also provides a bit more damage as well as maintaining passives such as the Tenacity of the Millileth 4 set bonus.

Constellation 2: Stone, the Cradle of Jade

Elemental Burst grants nearby characters on the field a Jade Shield when it descends.

This constellation is also one of his better ones which effectively gives you more options to increase shield uptime. However, it requires you to burst, as well as being quite useless when more often than not, you already have reliable uptime due to your shield having a longer duration than the cooldown.

So the overall power level in this constellation is quite nuanced. However, it does make your burst slightly more relevant in certain rotations or in general a quality of life upgrade.

Increases the level of Dominus Lapidid by 3.

Always nice to have a stronger shield. Although his shield is already quite strong at base. Quality of life upgrade if anything.

Nothing much to say here. Larger burst AoE and better survivability with the increased petrification duration.

Constellation 5: Lazuli, Herald of the Order

Increases the level of Planet Befall by 3.

When the jade shield takes DMG, 40% of that incoming DMG is converted to HP for the current character. A single instance of regeneration cannot exceed 8% of that character’s Max HP.

For a constellation 6, this one is quite underwhelming and frankly, overkill. The shield is already quite effective and the regen doesn’t improve Zhongli’s performance overall. Another quality of life/comfort constellation but definitely not worth it.

Zhongli can either be played as a shield bot or burst support. Both play styles have their pros and cons respectively.

Shield Bot: The sole purpose of this playstyle is to keep uptime of his shield as often as possible. Also worth mentioning is that it is quite easy to gear up as you only need to stack HP stats to make the shield effective. Downsides of this playstyle is your burst dealing considerably less damage, making it even less recommended to incorporate in rotations. (unless he has noblesse)

Burst support: This playstyle makes use of Zhongli’s significant burst scaling, making you able to do a considerable amount of damage while providing crowd control with petrification.

With a low burst cost, Zhongli makes great use of the 4 piece set bonus provided you don’t already have a noblesse holder on the team.

4 Piece Tenacity of the Millileth

One of Zhongli’s best generalist support artifact sets. Can easily proc the passive provided your pillar is placed near enemies. Although the domain is quite resin inefficient so keep that in mind when farming for it.

Zhongli’s best set for personal damage and in teams where he needs the ER set bonus. Since many characters can make more use of the set, prioritizing it for Zhongli is usually not recommended. Nonetheless if you have a spare 4 piece it’s functional.

Quite the niche set but effective nonetheless. Keep in mind it requires Zhongli himself to pick up the shards, however the DMG bonus is relevant in some teams. Not recommended to farm the petra domain but it’s still something worth mentioning.

If you don’t have the aforementioned 4 piece sets, a mix and match of any of them works and is mostly substat dependent.

Zhongli is an excellent holder of the 4 piece set as he can proc the passive quite reliably. Mainly used in teams where the EM increase is appreciated. (reaction teams, etc.)

The main stats you want for your Zhongli will depend on whether you want to build him for more shield support or more burst damage. You can always mix and match to your liking as well.

Crit stat stick and that’s pretty much it. High base atk but can’t really make good use of the passive.

Zhongli’s signature weapon however it is VERY deceiving. While it looks great on him, It is very underwhelming and isn’t significant enough to roll on as there are just better options. Provides a minimal attack buff and increased shield strength.

Zhongli’s BEST option for support utility. Despite being his worst option for personal damage, it is very much worth the tradeoff. Being able to generate even more particles reliably is invaluable for team damage and smoother rotations. One of Zhongli’s best weapon options and increases his support capabilities.

Really high crit stat stick. Nothing much to write home about.

Decent on Zhongli in a vacuum however, since you can only have access to one copy of the catch, there are plenty of other characters that the catch is better/ more useful on. Gives you more burst damage with ER stat. Not recommended but definitely can be used.

Makes use of the passive depending on the team’s energy capacity and gets better with refinements. Stat is negligible. Nonetheless it is still an option for burst damage.

The best f2p option for Zhongli as it provides HP% and is relatively easy to access due to being a 3 star weapon. Perfect for shield bot builds.

As for teams, Zhongli’s value is quite nuanced as he is not the best in slot support for most if not all teams. However, there are quite a few teams he is very much appreciated in, especially for an on-field carry that benefits from his interruption resistance such as Yoimiya and sometimes Hu Tao.

Nothing much to be said here. Slots in well with mono geo as a support and provides particles/passive damage on top of a res shred.

Yoimiya is probably the most appreciative of Zhongli’s shield/interruption resistance. Since you really want to execute her full normal attack combo uninterrupted, Zhongli provides exactly that.

Zhongli is not as necessary on Xiao teams compared to say, Yoimiya. However, his shield provides much needed comfort which helps ensure consistent damage output from Xiao. The resistance shred is nice as well as Xiao currently doesn’t have access to a dedicated anemo shredder. One of Xiao’s most standard teams involves Zhongli with Albedo, which is something worth mentioning. 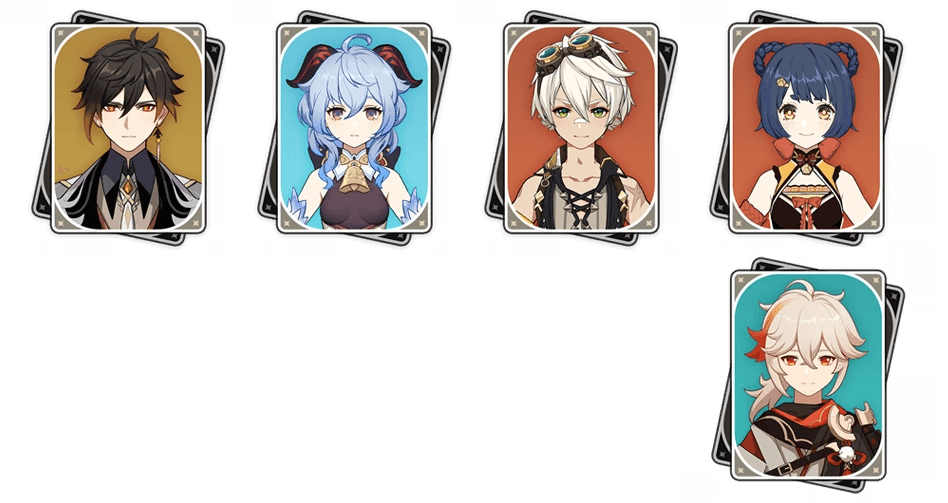 Similar to Yoimiya, getting interrupted destroys your DPS, so you really want to get the maximum amount of melts possible in your rotation, which is where Zhongli’s shield comes in.

He is heavily required in this team as Ganyu is very squishy and can get interrupted easily when attempting her charge shots. Just make sure to place the pillar away from your target so your melts don’t get stolen by it. Xiangling and Kazuha can be switched depending on preference. 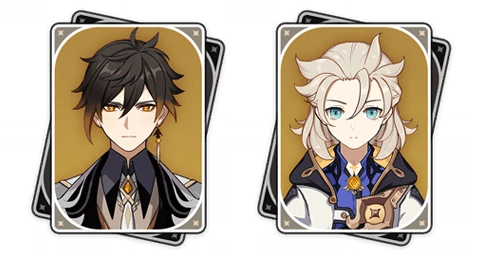 A team core that takes advantage of Geo resonance and provides relevant passive DMG. An example would be Hu Tao, Xingqiu, with double geo.

Any team that needs a shielder/interruption resist – While I want to make it clear that he may not be the best option for many teams, he can still be USED in them, making him somewhat universal. On-field carries can appreciate his shield as well so keep that in mind if you feel like you are having trouble dodging. If you have a skill issue within teams, Zhongli is an incredible character for that. 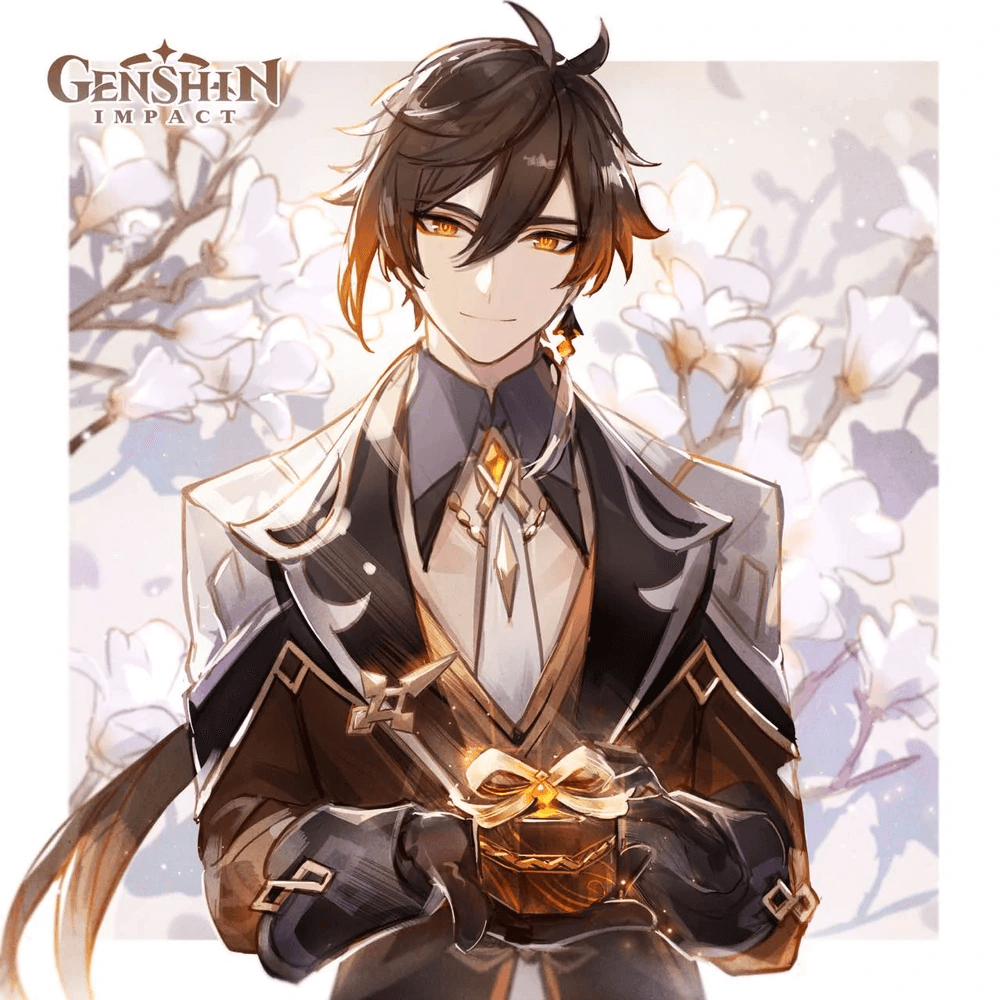 Zhongli is an exceptional comfort character overall. He is invaluable for mobile players as well. If you wanna turn your brain off in combat and you think it’ll improve your overall Genshin experience, that is a valid reason alone to roll him.

However, I think it is a disservice to not mention his underwhelming value to the hardest content in the game (Spiral Abyss) as well as his value as a unit when it comes to drafting optimal teams.