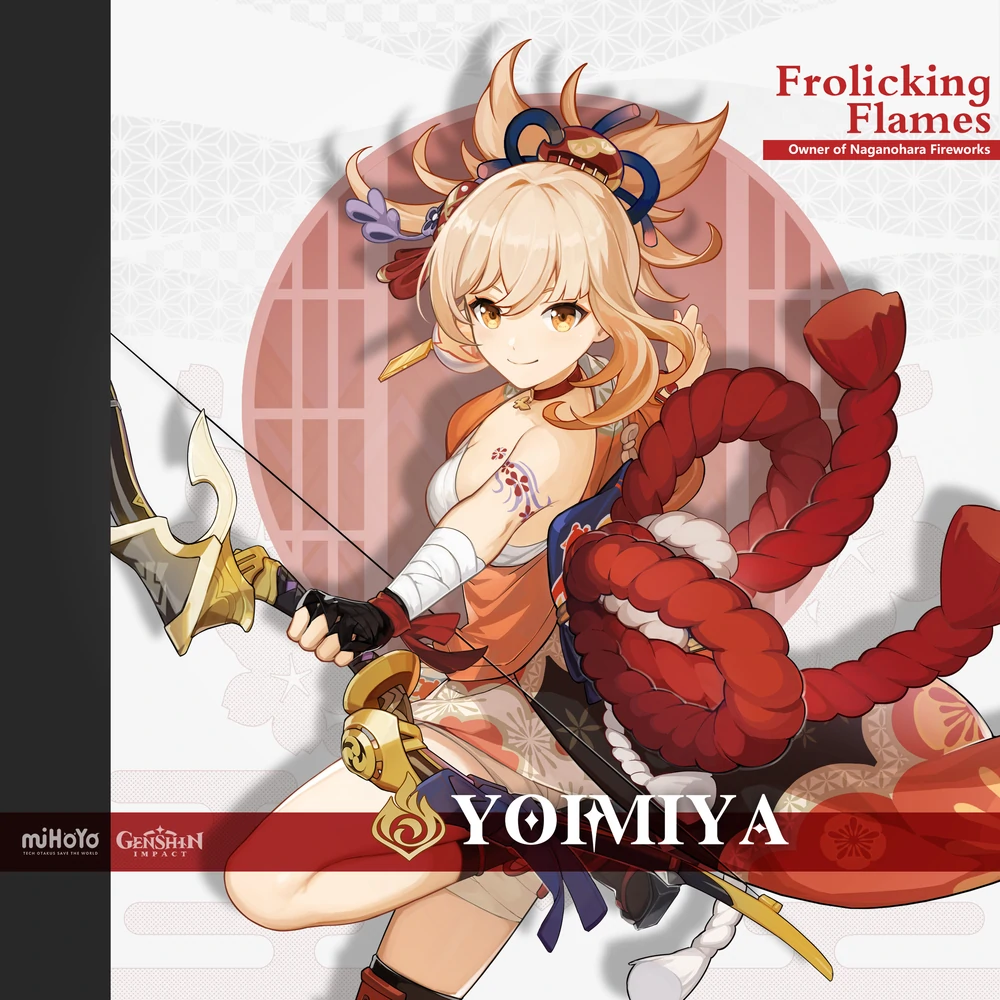 Yoimiya is a Pyro bow user who was first released back in 2.0. Despite being a very controversial character when she was first released, she is now widely regarded as one of the best single-target dps units in the game.

In this article, I’ll be going over everything you need to know about Yoimiya, including her playstyle, best artifacts, weapons, teams, and more.

Her charged attack, however, is slightly more interesting. She has a normal charged attack like other archers, where it simply does Pyro damage, however, if you keep charging the arrow, it will generate up to 3 Kindling arrows, which hone in on targets.

Her elemental skill is also a huge part of her kit. When used, all her normal attacks will get converted into pyro damage, and they will do more damage.

Her elemental burst is part of what made her kit so controversial when she was first released, as many think it doesn’t synergize well with the rest of her kit. When her burst is used, she will deal AOE pyro damage, and mark an opponent with Aurous Blaze. When any character other than Yoimiya deals damage to the opponent marked, it will cause an explosion that deals pyro damage.

Overall, it’s very important to level both her normal attack and elemental skill. Her elemental burst can be leveled up if you find yourself using it, but, depending on what artifact set you choose, you may not need to level this up.

Yoimiya is a very simple character and she doesn’t have many combos that you need to learn to get the most out of her kit. Simply use her skill, and then spam her normal attack, and you should deal some great damage!

As you ascend Yoimiya, she will gain Crit Rate.

Tricks of the Trouble-Maker: During Niwabi Fire-Dance, shots from Yoimiya’s Normal Attack will increase her Pyro DMG Bonus by 2% on hit. This effect lasts for 3s and can have a maximum of 10 stacks.

This is a nice passive as you don’t need to worry about it, it will simply buff your Yoimiya automatically.

Summer Night’s Dawn: Using Ryuukin Saxifrage causes nearby party members (not including Yoimiya) to gain a 10% ATK increase for 15s. Additionally, a further ATK Bonus will be added on based on the number of “Tricks of the Trouble-Maker” stacks Yoimiya possesses when using Ryuukin Saxifrage. Each stack increases this ATK Bonus by 1%.

Unless you use her burst a lot, you likely won’t be noticing this passive much.

Blazing Match: When Yoimiya crafts Decoration, Ornament, and Landscape-type Furnishings, she has a 100% chance to refund a portion of the materials used. 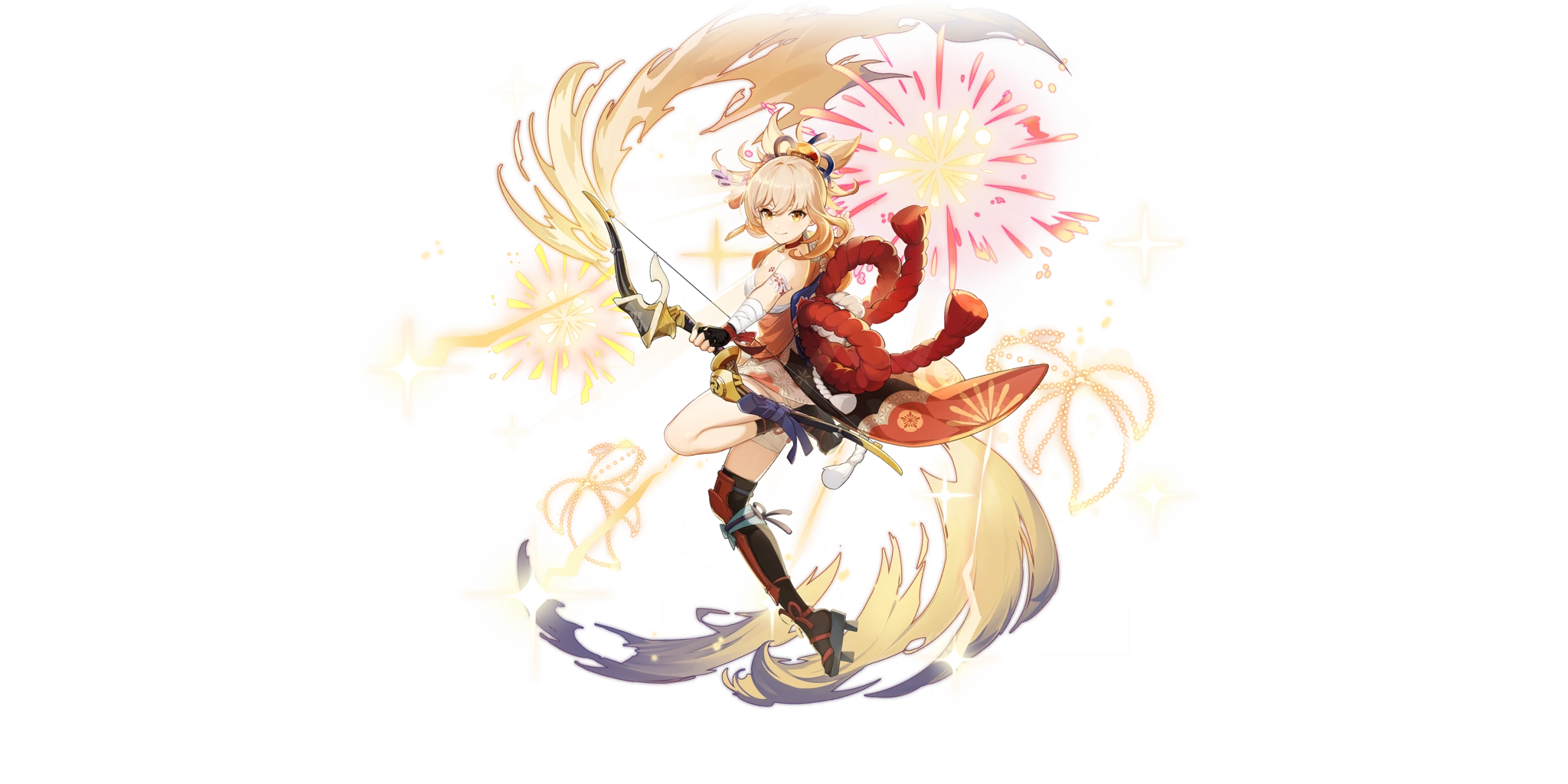 It’s important to note that no character needs any constellations to be viable, especially Yoimiya, as her constellations aren’t that good compared to other 5* units. It’s only recommended to pull for these constellations if you really like her, otherwise you’re better off saving your primogems for another unit.

The Aurous Blaze created by Ryuukin Saxifrage lasts for an extra 4s.
Additionally, when an opponent affected by Aurous Blaze is defeated within its duration, Yoimiya’s ATK is increased by 20% for 20s.

Constellation 2: A Procession of Bonfires

When Yoimiya’s Pyro DMG scores a CRIT Hit, Yoimiya will gain a 25% Pyro DMG Bonus for 6s.
This effect can be triggered even when Yoimiya is not the active character.

Increase the Level of Niwabi Fire-Dance by 3.
Maximum upgrade level is 15.

When Yoimiya’s own Aurous Blaze triggers an explosion, Niwabi Fire-Dance’s CD is decreased by 1.2.

Increases the Level of Ryuukin Saxifrage by 3.
Maximum upgrade level is 15.

During Niwabi Fire-Dance, Yoimiya’s Normal Attacks have a 50% chance of firing an extra Blazing Arrow that deals 60% of its original DMG. This DMG is considered Normal Attack DMG.

Yoimiya is a fast-paced character who likes to be on field for the majority of the battle. She is very simple to use, and will make a great addition to almost any roster.

Make sure to use her skill before doing any normal attacks, and pair her with either a hydro or an electro (which I will go over more in the team section), and you have yourself an amazing main DPS who can shred almost any enemy.

However, farming this domain isn’t very efficient, as Lavawalker, the other artifact set you get in this domain, is useless for most characters.

Shimenawa, on the other hand, shares a domain with Emblem of Severed Fate, which is the best artifact set for almost any burst dps character. Overall, either of these sets will work well, so think about what would be the best investment for you and your account before farming either of them.

Like most main DPS units, these are the main stats that you want on your artifacts.

ATK% is usually the best option for Yoimiya when it comes to her sands. However, in certain team comps, EM can be better. These team comps include any comp that uses Bennett, and a hydro or electro off-field sub dps such as Xingqiu or Fischl. This is because Bennett will give Yoimiya an attack buff with his burst, so you’re better off getting more reaction damage as she will already have enough attack.

It’s important to note though that an ATK% sands won’t be bad, so if that’s all you have, that will work just fine.

Her energy recharge needs will depend on your playstyle and which artifact set you choose. You should however aim to have around 120% at least, to ensure you can use your burst at least every so often.

These are the best 5-star weapons for Yoimiya. For the most part, any 5 star weapon will be good as they are strong stat sticks.

As Yoimiya’s signature weapon, it is definitely her best option, and will boost her damage by a lot.

This bow increases normal attack damage, which is incredibly valuable to Yoimiya, and is a great choice for her weapon.

This weapon boosts both her crit rate and crit damage, making it a great weapon for her.

This weapon has an insane amount of crit damage, and although that comes with less base attack, it’s still definitely a good choice for Yoimiya.

This weapon increases her crit rate, as well as buffing her attack with its passive. Definitely a good option!

These are the best 4-star options for Yoimiya.

Her best 4 star option. This weapon, especially at high refinements, can often out-damage many of the 5 star weapon options.

A great option as it can be crafted, so every player will have access to it and its refinements. However, the ability directly counteracts the Shimenawa Reminiscence set, so it is advised to only use this if you aren’t using Shimenawa.

This is the bow obtained by buying the battle pass and getting to level 30. Although this is definitely a good weapon for her, there are better craftable options, so it isn’t recommended to buy this specifically for Yoimiya. However, if you happen to have one of these lying around, it’s a good option!

Her second best craftable weapon, and her best craftable one when using 4 piece Shimenawa. Although this is a good option, it’s important to keep in mind that, to get the most out of this weapon, you need to do charged shots at opponents weak points every so often. This can get annoying, and may not be worth it.

Note: Yoimiya is prone to interruption, so many of her teams like to have a support that provides shielding.

For vaporize, you want to use either Xingqiu or Yelan to apply hydro, to allow Yoimiya to vaporize. Other characters, such as Kokomi and Mona, can be used, but Xingqiu and Yelan are better. For the other two slots in this team, you can use any combo of Bennett, Yunjin, Zhongli, or an Anemo support such as Kazuha or Sucrose.

Overload is very similar to Vaporize, except instead of Xingqiu or Yelan, you want to use someone who can apply electro off-field, such as Fischl or Beidou.

Pyro team is exactly what it sounds like. You load your team up with Yoimiya, two more pyro units, and then an anemo unit, with Kazuha being the best choice. For the pyro units, Bennett and Xiangling are the most common choices. 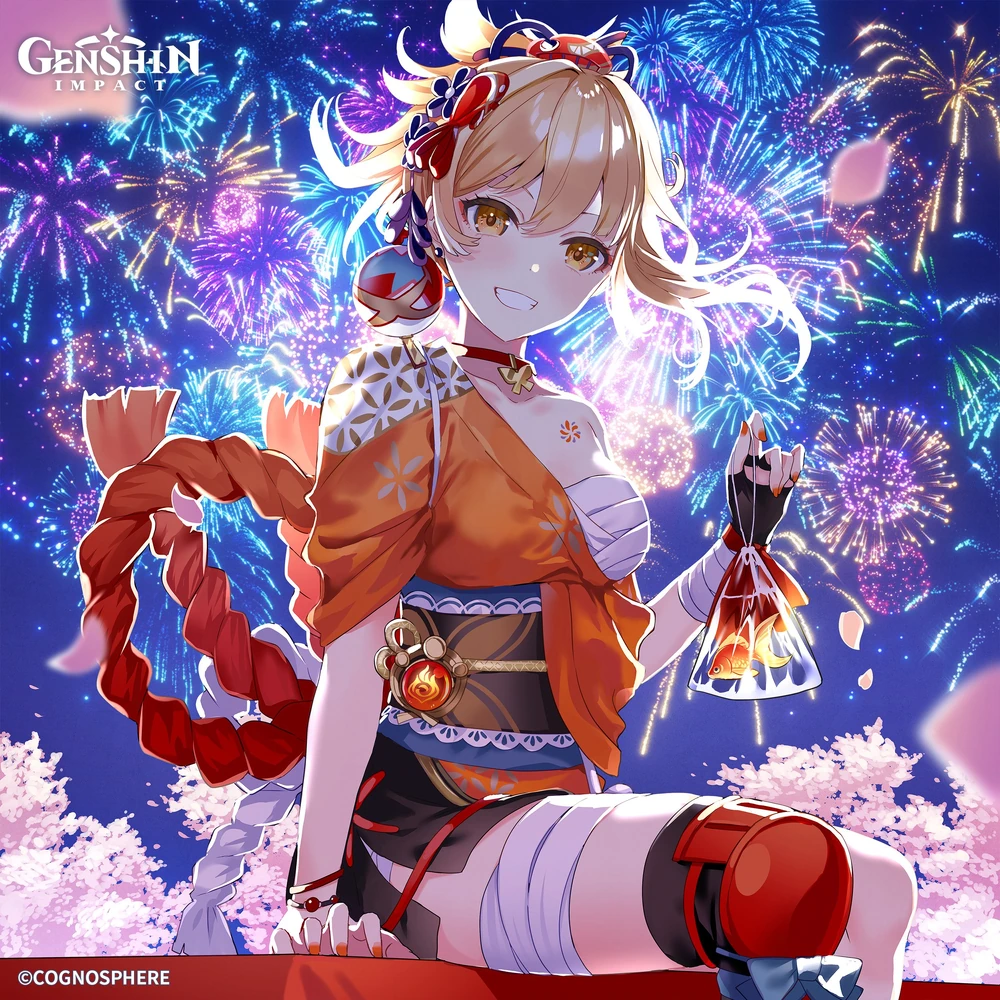 This wraps up our Yoimiya guide! I hope this has helped you understand her better. She will be on the featured banner after Kazuha and Klee, so, if you plan to pull for her, good luck!

Currently a high school student, living in New Zealand. I have always loved finding the most optimal builds for my characters since I started playing Genshin and I love sharing my knowledge to help others.