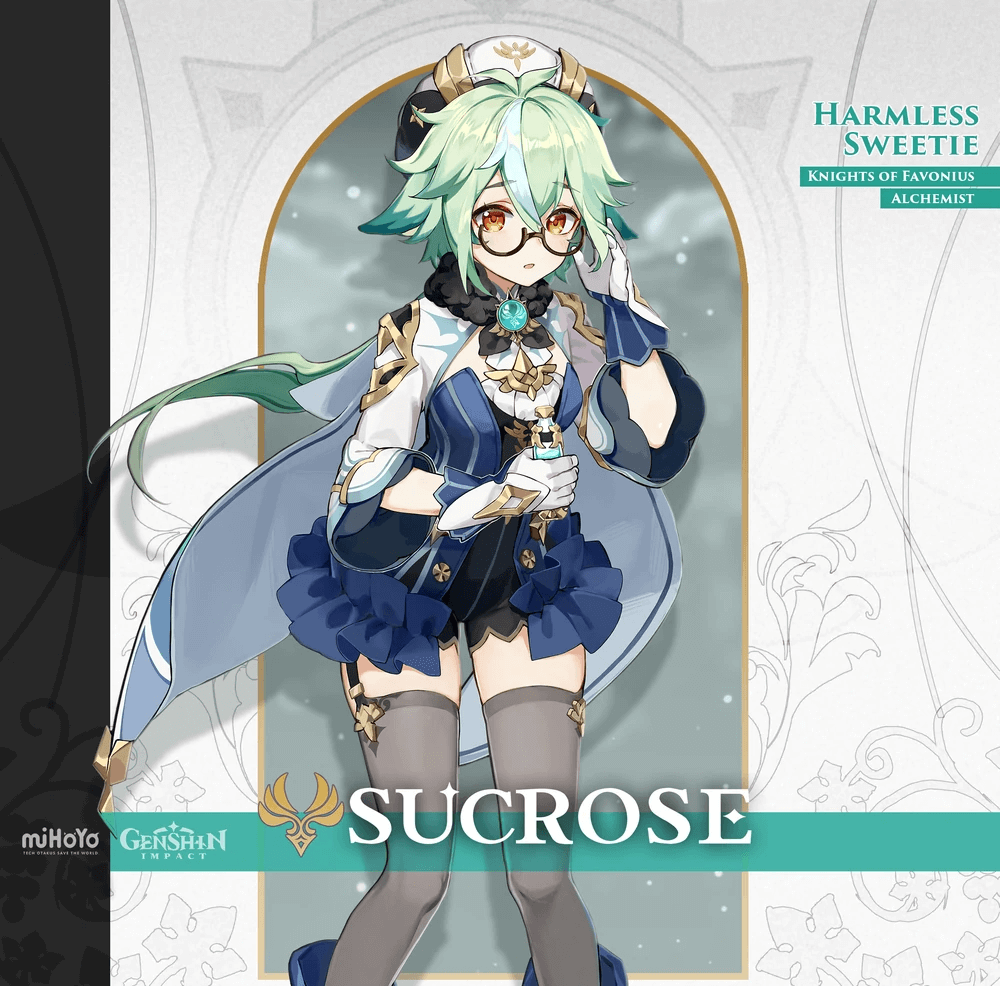 In this article, I’ll be going over everything you need to know about Sucrose , including her playstyle, best artifacts, weapons, teams, and more.

Sucrose is a 4 star Anemo Catalyst user that is revered as one of the best units in the game while simultaneously being underrated. She is typically played as either an off-field VV support or on-field as a ranged driver that synergises well with off-field units, along with sharing Elemental Mastery to her party. She boasts exceptional performance in AoE along with having very accessible teams.

Simple 4 hit Normal Attack string. While the talent damage of her Normal Attacks are quite low, keep in mind that they deal Anemo DMG, which means you are able to trigger swirl and apply the 4 VV set bonus as long as you Normal Attack. This is even more relevant in teams where she functions as a driver.

Upon cast, Sucrose creates a circular AoE in front of her, dealing Anemo DMG and providing quick CC that pulls opponents/objects together and either launches/staggers them depending on enemy type [hilichurls get launched/ vishaps get staggered etc].

This skill is also one of her main sources of personal damage compared to her other talents. It’s worth noting that this skill is able to group objects such as Bloom Cores and swirl entities such as Guoba, who applies Pyro to himself, giving you the ability to swirl Pyro.

Sucrose launches a projectile in front of her creating a field with similar CC properties as her skill, pulling enemies and launching them each time it ticks while dealing Anemo DMG periodically. This field lasts for 6s and can be infused with one element it comes into contact with. The infusion priority goes as follows: Pyro>Hydro>Electro>Cryo

It is important to note, pulling off a successful infusion can be clunky at times and you might get the wrong infusion due to external factors. However, it is far from a deal breaker and can be mitigated with elemental application awareness. Just something to keep in mind.

Sucrose requires little to no investment regarding her talents. Increases to her talent levels are very minimal when taking her damage contribution into account.

The majority of her damage comes from her swirls, which scale off of character level and Elemental Mastery, not talent levels. Not to mention her multipliers aren’t that high either. She is quite exceptional and highly functional even at level 1 talents.

As you ascend Sucrose, she will gain Anemo DMG Bonus.

Whenever Sucrose triggers Swirl, characters in the party with the matching element that is swirled have their Elemental Mastery increased by 50 for 8s.

Given the opportunities that Sucrose is able to Swirl, you can benefit from this passive almost always. It is not a lot by any means but any source of EM is always appreciated for reaction teams, especially Dendro related teams or teams where you want EM on your carries but don’t want too much where it diminishes.

At 600 EM, this buff is equivalent to a 4 piece Instructors set bonus. A valuable passive especially for reaction value within her teams while synergizing with her full EM build. Note that the CD for this buff can be refreshed every time your skill/burst hits opponents.

When Sucrose crafts Character and Weapon enhancement Materials, she has a 10% chance to obtain double the product. 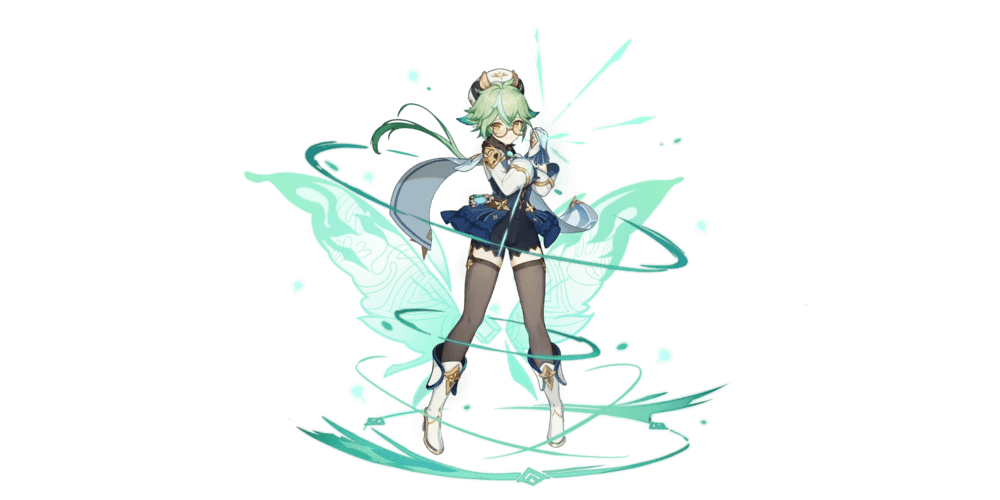 Since Sucrose is a 4 star character, you don’t have to worry too much about pulling for constellations. You may get some copies with events, or you may just get some over time on good banners.

Don’t worry too much about constellations. Sucrose is perfectly capable at C0, but she does get a huge boost at C6.

A very valuable constellation that provides you an extra skill charge. If you are going to go for any constellation in terms of value, it would be this one.

Gives her Elemental Burst an additional 2 second duration. Not impactful enough to go for, but nowhere near useless either.

A simple increase to her Elemental Skill talent level. As mentioned previously, her talent DMG in general aren’t as prioritized as other forms of investment so it’s not that impactful holistically.

Every 7th Normal or Charged Attack hits against opponents will reduce the CD of her Elemental Skill by 1-7s.

Another talent level increase, this time towards her Elemental Burst. As mentioned previously, her talent DMG in general aren’t as prioritized as other forms of investment so it’s not that impactful holistically.

Upon infusing an Element with Sucrose’s Burst, characters with the corresponding element will receive a 20% elemental damage bonus.

While a very good constellation in theory, as mentioned earlier in the talents section, her burst infusion is very clunky for reasons outside of your control. When you are able to pull it off it’s great! However, just be aware of the inconsistency at times.

Sucrose can either be played as an off-field support or as an on-field driver.

When played as an off-field support with minimal field time, her main purpose is providing utility to your team in the form of CC, buffs/VV shred.

Regarding her on-field driver playstyle, in addition to providing the aforementioned utility, she is also very efficient in driving completely off-field teammates [Xingqiu/ Beidou, etc.] while swirling much more due to her Anemo infused auto attacks. 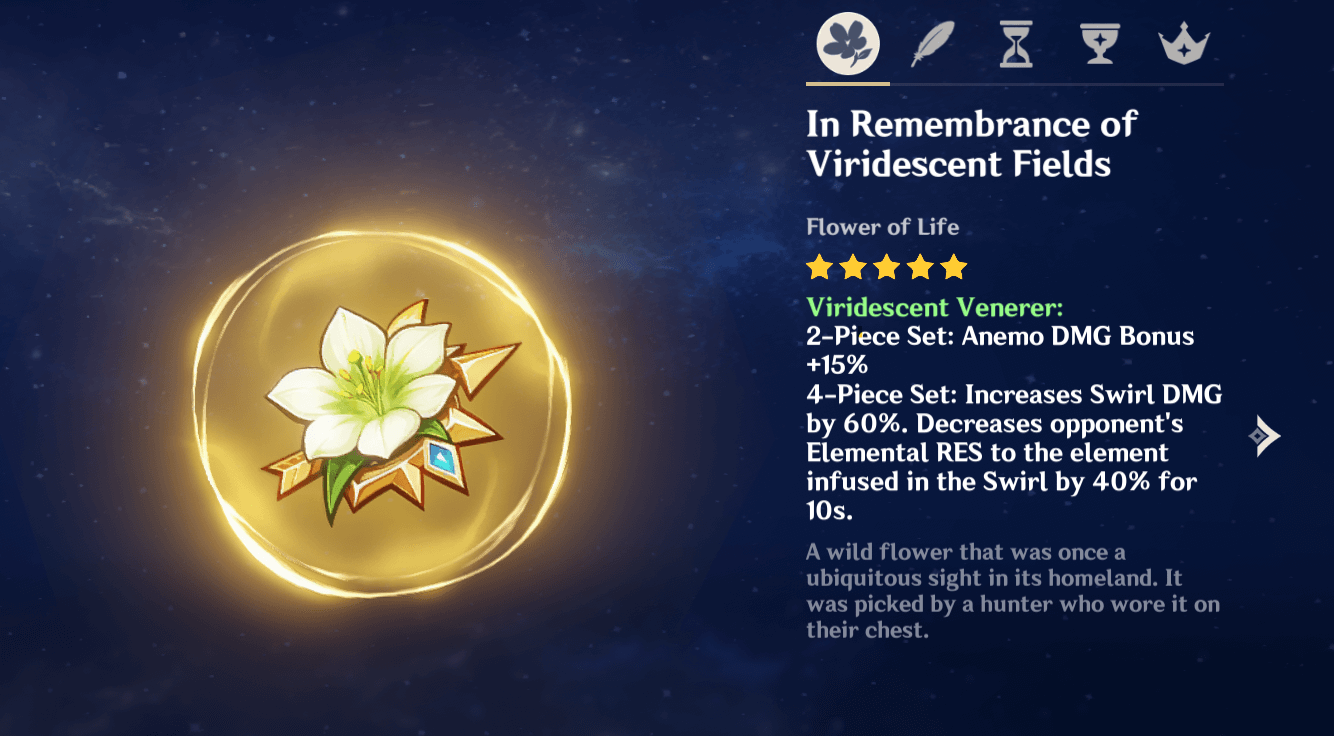 Her best in slot artifact set regardless of playstyle due to the strong set bonus. Sucrose is also able to keep VV uptime relatively high by simply Normal Attacking and utilizing multiple skill casts. No real reason to stray away from this set.

Simple enough, since Sucrose is an Anemo unit, we will scale her damage completely off of Elemental Mastery. This makes her quite easy to gear as you only need to hit the EM main stat on your 3 pieces.

Sucrose’s energy requirements are dependent on many factors. Constellation 1, along with Sacrificial Fragment procs giving you more particles which obviously lower these requirements.

You also have to assess how much you value her burst within your specific team and since Sucrose is a very flexible support, there are way too many teams to put a number on her requirements.

As always, try to get as much as you can and focus on ER substats as equally as EM substats.

One of, if not Sucrose’s best weapon options especially as an on-fielder. The Elemental Mastery stat it gives you is obviously very valuable for her on top of the passive potentially giving you an extra charge of your Elemental Skill, which is an instrumental part of her kit and how she functions within her role. With C1, this basically means you have access to 3 casts of your skill.

Another contender for one of her most viable weapon options. The passive is very strong to where it is generally valuable for both of her playstyles as long as you are able to transfer the ATK buff to the appropriate character within your rotation. An example would be swapping into Xiangling or Beidou and even Xiao.

This weapon is solely mentioned for the situation where you do not have access to Sacrificial Fragments and are focused on EM stacking for Sucrose and her EM share. It is also an F2P option which is a plus.

One of Sucrose’s new teams composed of on-field Sucrose, Xingqiu, Fischl, and Dendro Traveler. A very strong team against AoE content that scales higher with more enemies due to how Bloom Cores generate.

Since Sucrose is already built with high EM, along with ideally Sacrificial Fragments, her Hyperbloom DMG is very relevant. Her ability to drive Xingqiu along with innate grouping is a big plus here as well.

A very reliable team that is efficient against most forms of AoE content utilizing Electrocharged to a high degree. The team consists of on-field Sucrose, Fischl, Beidou, and Xingqiu.

Since the Hydro Aura and Electro Aura coexist upon triggering Electrocharged, this means double VV shred uptime is very easy to maintain on top of the fact Sucrose is on-field always swirling/ driving Xingqiu and Beidou through Normal Attacks.

Thrilling Tales of Dragon Slayers can also be used here for Beidou to snapshot the ATK buff. Not to mention Xingqiu here providing tons of Hydro application and damage. All around a tried and true team boasting great synergies.

Another very strong team comprised of the infamous National Core along with an on-field Sucrose once again. Nothing new to be said here in terms of performance. Basically a Xiangling vape team with Sucrose driving Xingqiu and providing CC/ VV shred.

As mentioned earlier in the talents, Sucrose’s skill is able to swirl Guoba’s self Pyro, which is something you can incorporate in your rotation. Just make sure you snapshot Bennett buff onto Xiangling, as well as TTDS if you are using it.

Quite the accessible team as well with all units being 1.0 characters with frequent shop rotations.

Sucrose can also be utilized with minimal field time within teams that appreciate her utility. Swapping into her provides EM share along with VV shred, which is nothing to scoff at. TTDS can also be used here for a more support/buffing oriented role.

While being slightly convoluted, she is able to double VV in certain scenarios as well, provided the set up is correct. Do note that the comps displayed are one of many comps that she can fit in. These aren’t the only teams she is played as an off-field support by any means. 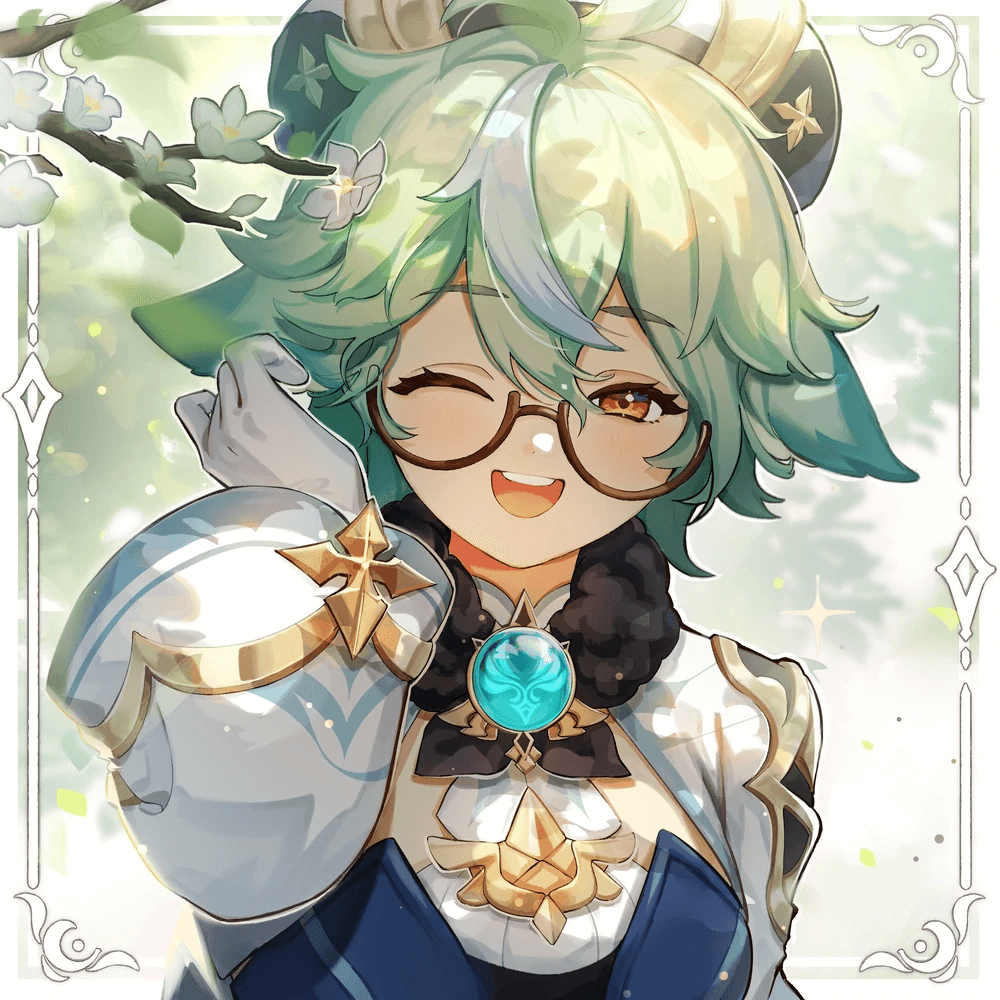 Sucrose has solidified herself as one of the strongest units in the game, along with the team compositions to back up her performance. On top of a strong on-field playstyle, she is able to flex as an off-field VV support on teams that simply lack one, including teams I may have missed due to varying assumptions that are account contextual.

Low investment, accessible weapon options, high impact, she seems to have it all! If you happen to have a Sucrose that is not leveled, she will definitely offer substantial value that teams can benefit from.