Destiny 2: Season 19 PvP Overhaul (Everything You Need To Know)

There was small talk of PvP quality of life changes and a Competitive overhaul, but recent This Week at Bungie gave more details than what was expected.

Plenty of players think Bungie should develop only the PvE side of things, but PvP is a good way to make the lulls in between content drops not quite as barren.

With a good foundation for PvP, there is much more replayable content in the game while new raids, dungeons, and content are being developed.

This article will summarize all of the changes and give thoughts, opinions, and further suggestions on how to evolve the player-versus-player environment in Destiny.

A summary of the changes can be described by the following points:

The summary of how Bungie views the game modes are the following:

The goal of the playlist reworks are to create balanced and consistent populations across game modes. The new playlists will be as the following: 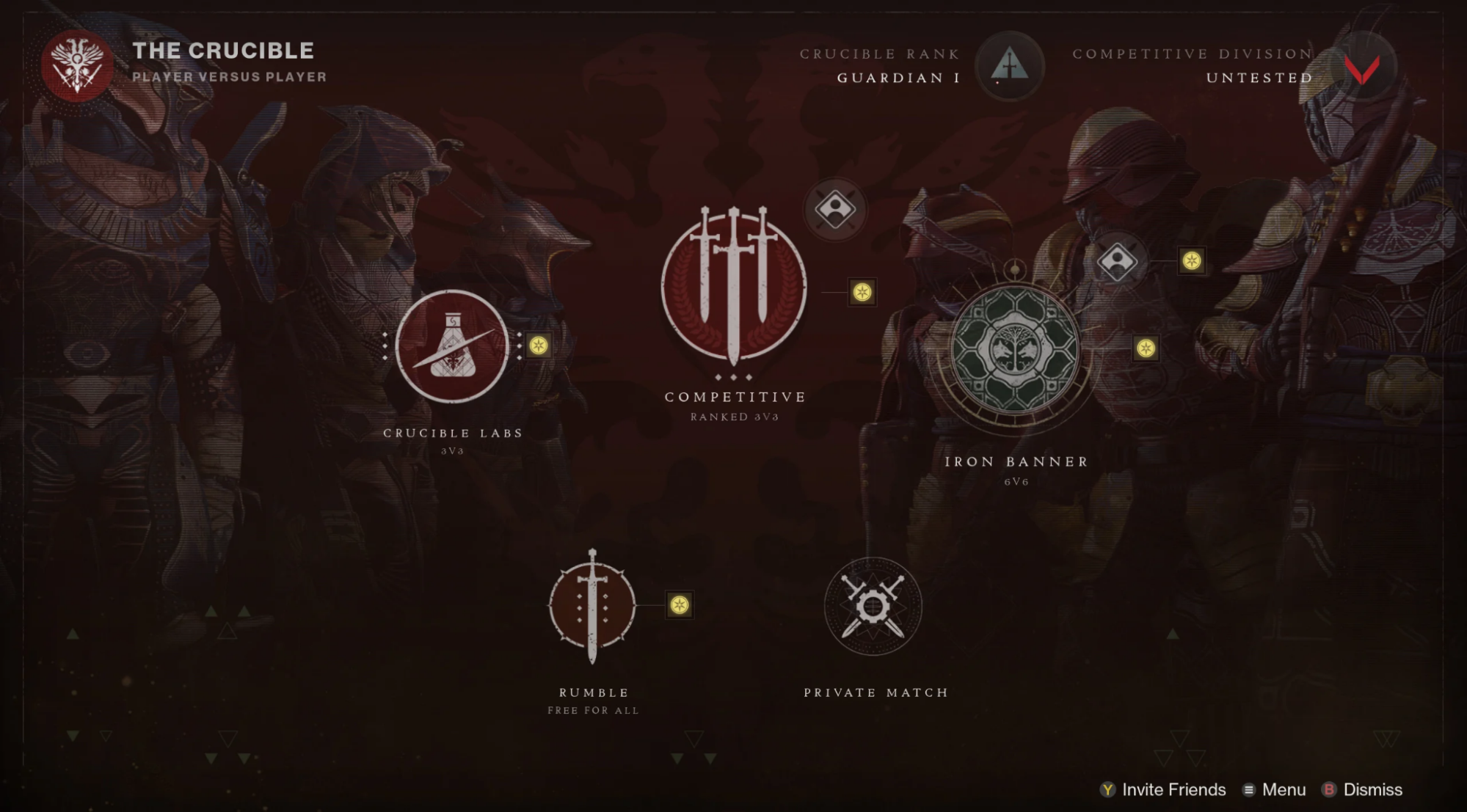 Ranks are being added. There will be 7 divisions of rank, each containing 3 subdivisions. The ranks from lowest to highest will be.

At the start of the season, you will play 7 placement matches, and then will be placed in one of the ranked divisions. From then on you’ll play games that will raise and lower your rating based on the following parameters:

Once you reach the threshold to go into the next Division, you will have to win 2 of the next 3 games to get promoted. The same goes for moving down a division, where if you win 2 of 3 games, it prevents you from being downgraded.

Bungie is avoiding the pinnacle rewards drama that occurred when Mountaintop, Recluse, Not Forgotten, etc. were tied to ranked rating. So there are no tangible rewards. The only thing that is gained is a multiplier for more reputation with a higher rank.

No cosmetic rewards, no weapons, and no armor for getting higher ranks… more thoughts on this later. The reintroduction of Rose is the only reward that is in a way tied to competitive divisions. An introductory quest for playing Competitive will grant Rose, and then weekly quests will be available for each character to get a random roll for Rose for playing in the playlist.

“Glorious” will be a new title seal added to the game and tied to the crucible. To initially earn the title is based on playing games and winning games with no rank requirements. To guild, the title, reaching the Adept rank will be required, so there is exclusivity based on rank to the gilded version of this title.

It is noted that in the future Bungie will add cosmetic rewards for Competitive Divisions after Lightfall and that Trials of Osiris will have 2 new weapons introduced into its loot pool which will replace 2 current weapons. One will be a Machine Gun and the other a 140 RPM Hand Cannon.

Iron Banner will also be getting some changes. In terms of rewards, Bungie is reintroducing an Auto Rifle and Slug Shotgun with random rolls and is bringing back old armor sets from Destiny 1 that can be earned in the playlist. 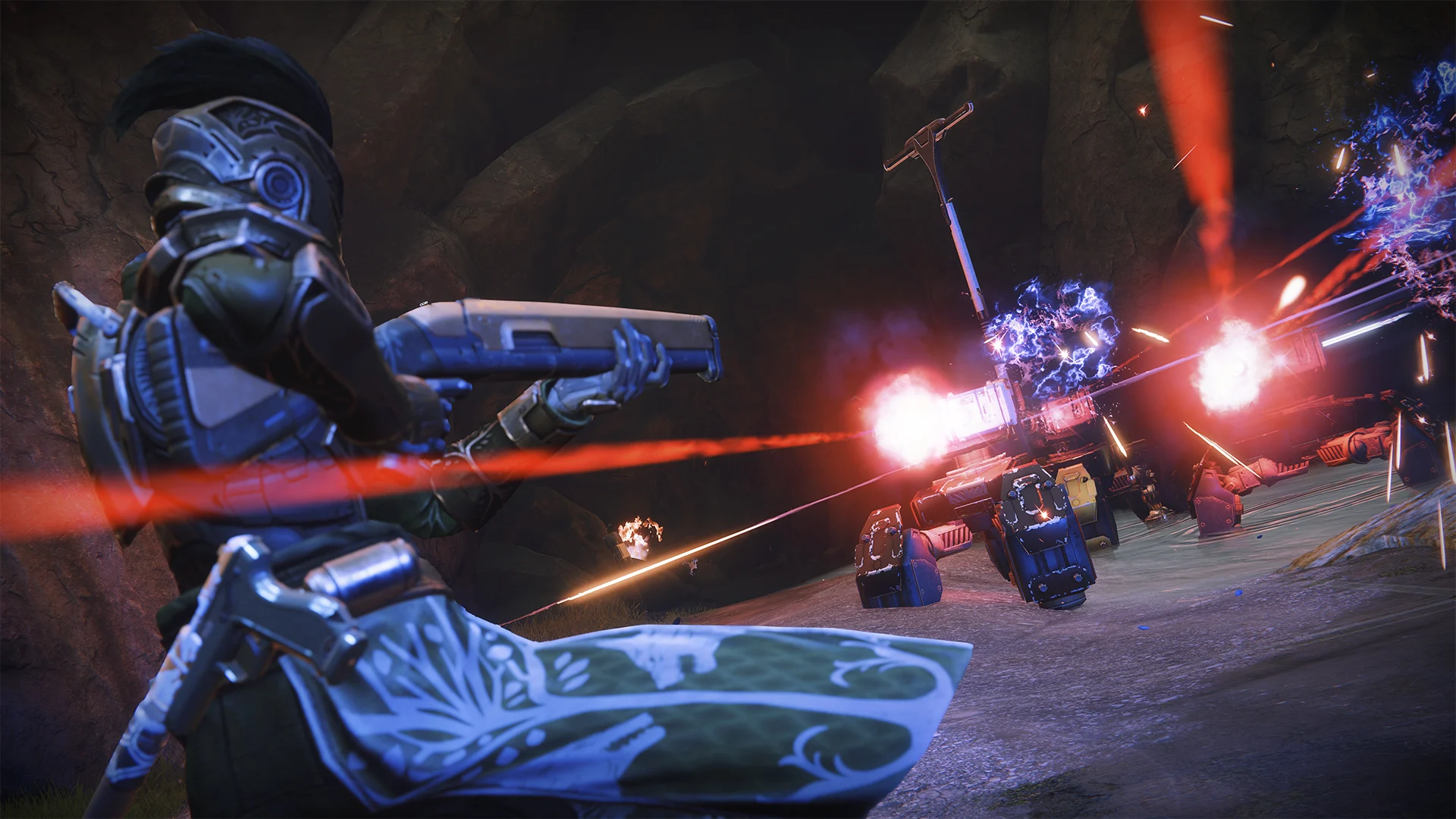 Iron Banner: Fortress will be a new game mode exclusive to the Iron Banner available on January 3rd, 2023. No details were given on the mode, but this accompanying picture was included, and it appears as if the game mode is an evolution of Zone Control.

This is a lot of information, and it is a good start in the right direction. Unfortunately, I think there is still a lot more to add and refine to have a strong foundation player versus player ecosystem in the game. We’ll go over each major section, and give thoughts, opinions, and suggestions on the changes.

Combining playlists will accomplish this somewhat by condensing playlists together to increase the population in the remaining playlists. Loosening the SBMM in quickplay and having CBMM in the Weekly Rotator is also a good step in solidifying the identity of these playlists for fun.

The introduction of a more serious Competitive playlist will reinforce this, as that will be an area for people to try their absolute hardest to win.

Where I think they went wrong here is noting that people enjoy the fun and creativity that comes with Private Matches, but they do nothing to lean into this with more fun playlists. Mayhem and Scorched are a start, but there can be so many more fun modes that simply aren’t Super Spamming.

\Team Snipers, Sticky Grenades only, Swords only with increased movement speed, Sparrow Racing, or the end all be all… Forge. Forge would be a basis for the community to create future game modes that could be incorporated into future playlists.

This is the biggest change in this TWAB. Having an actual ladder-based system is fantastic; proving skill through a rank is a good thing for replayability and something for players to chase.

From an ideational perspective, this is a great addition to the game. The execution has to be done well, otherwise, this would be a massive step back for PvP and the general replayability of the game.

There are a few things that concern me from the initial reveal here. The first thing is the rewards. There will be no rewards on the initial release of the rework outside of the Rose quest. There are no rewards tied to climbing the rank.

This may be quite off-putting to those on the fence about playing in the mode. This has a good chance of creating a bad first impression on many who may not return once cosmetic rewards are introduced later on. Players do play activities for pride, which is what this game mode is relying on.

Why not bolster it with rewards? Destiny players will play nearly anything if the carrot on the stick is worth it. This would be the best way to ensure the initial success of the playlist. The reward doesn’t have to be the new best weapon in the game.

It can be an emblem with the rank‘s logo on it, an exotic ornament, an emote, or anything cosmetic that can be seen by other players letting them know you are this rank, and you are proud of it.

The other major concern I have is this sentence: “Uses a new SBMM setting built using concepts we developed for loose SBMM tuning, but tightened to match you more closely against opponents of your Skill.”

This makes it seem like there will be fairly tight SBMM in this new ladder mode. Tight SBMM is arguably the primary reason the current Glory system is in no way competitive. Matchmaking should be based on playing against people at the rank you are in like every other ladder-based PvP game.

What SBMM in this creates is a competitive ecosystem where to rank up a player must play better than the skill the game perceives them to be, rather than playing better than the people at the rank they are currently in.

It would be similar to professional golf using the handicap system or the NFL having only the bad teams play each other in the regular season so some of them make the playoffs. Now it sounds as if there is a mix of the old system and standard competitive ladder games, I hope it leans heavily toward the latter.

Otherwise, the playlist will find itself in the old conundrum of the best way of achieving a high rank being better than the game thinks you are.

Trials of Osiris and Iron Banner

Minimal changes here. Just 2 new weapons for each, talk of Fireteam Based Matchmaking to reduce the necessity of the Freelance playlist, and Iron Banner gets the old armor and new mode.

I wish there was a little more added in terms of rewards here. Introducing new weapons and the new mode to Iron Banner is nice, but having something in terms of rewards to keep players active through the season would have been good for the overall health of the game.

This could have been accomplished through a season-long quest, bounties that progress slower with losses, or increasing rewards for non-adept weapons when at 7 wins and any number of losses.

Only time will tell how the changes are, and how they are received by the community. It is difficult to fully judge them as a good portion of it hinges on how matchmaking is handled, and from a player’s perspective that is very hard to judge without playing it firsthand.

Something that can be judged before release is the rewards… and rewards for Competitive Divisions need to come sooner rather than later. This is especially the case because sorting players into the proper divisions will take some time, just as any ladder-based game takes no matter the matchmaking algorithm.

So players might as well be rewarded for sticking out of the growing pains. Overall it is good to see an effort is being made, and even if the changes are less than stellar it’s a start in the right direction and shows the dev team is willing to dedicate resources towards improving the PvP ecosystem of the game.

For more discussions and articles, check out the rest of our Destiny 2 guides.