It was recently announced that Divinity will be getting a nerf come Season 19 which is set for December 6th.

The planned nerf is to lessen the debuff amount from 30% to 15%.

Divinity is a staple in raid groups’ DPS as it offers the highest possible debuff to an enemy and makes landing critical shots much easier.

We’re going to discuss if Divinity will still be viable, what will be the best DPS options moving forward, and general thoughts on the nerf. 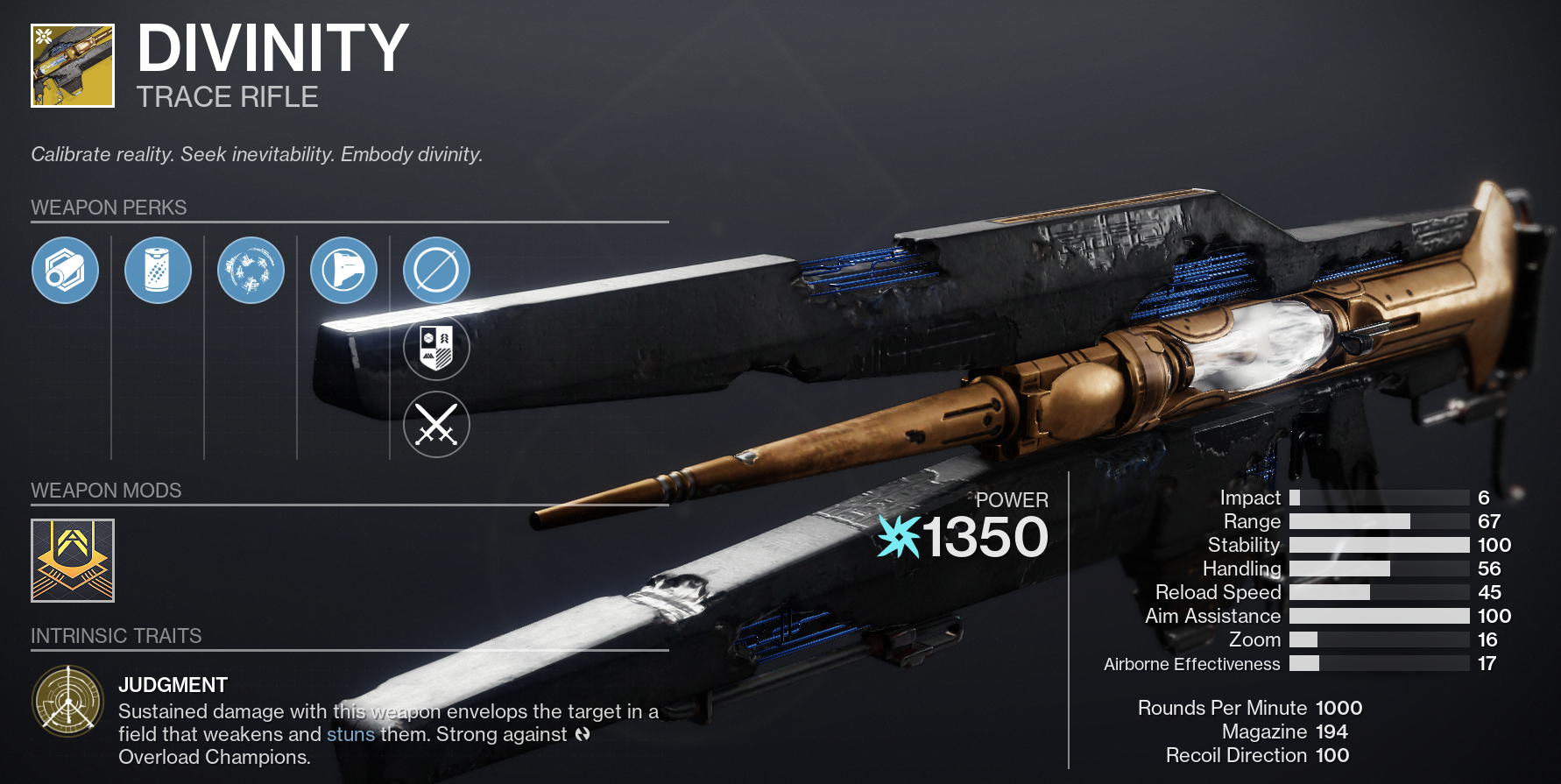 End of an Era?

Short answer… no. On the surface it might seem like Divinity will be useless because there are stronger debuff sources in the game, so those will become the new must-use options for DPS. Divinity offers so much more than just the debuff though. First, let’s take a look at the math behind the damage numbers pre and post-Divinity nerf of a group of 6.

Assume a person’s damage is 100%. The player using Divinity will do minimal damage, so we’ll simplify it and consider them 10% because Divinity still does some damage. Pre-nerf with Divinity the other players will deal 30% more damage, so they will count as 130%. Here is a comparison of pre and post nerf Divinity:

On the surface, it might seem like Divinity isn’t worth using anymore, as the Post-Nerf amount is less than not using Divinity at all, and you can use other Debuff means such as a Tether for an alternate means of a 30% debuff.

The thing is that we need to consider the other aspect of Divinity’s strength, and that is the Crit spot expansion. In the current meta Linear Fusion Rifles are the best option for DPS, and they require precision hits. If a boss is hard to hit precision hits on, a few misses can really affect your team’s DPS.

A precision shot from a Linear Fusion Rifle deals 7x the damage compared to a body shot to bosses. So if your team misses just 1 out of every 10 shots due to not having the easy-to-hit crit spot from Divinity, that 600% turns into 549%.

In certain boss fights hitting all precision hits can be quite difficult without a Divinity due to the boss moving, having a small crit spot, and flinch. Here is the break-even point of the post-ner Divinity versus no Divinity, assuming 100% precision hits with using Divinity.

What this is saying is that if your team hits below 97.08% of critical hits, Divinity is worth using. Now let’s look at that relative to using a different 30% debuff such as a tether.

This calculation states that if your team hits fewer than 70.83% precision shots Divinity is better to use in comparison to another 30% debuff.

In reality, keeping 30% debuff active the entire time during a DPS phase takes away from other aspects of damage.

A few things to note are that using a Tether takes time, does less damage per second than a Linear Fusion Rifle, doesn’t last forever, and takes away from a Hunter being able to use a better DPS super in Blade Barrage.

Because of all these stipulations, I would move this number closer to 80%. So long story short…

If your team hits fewer than 80% of precision hits on a boss, Divinity is worth using after its nerf. If your team is able to hit greater than that amount, use another global debuff such as multiple tethers, or have someone use Tractor Cannon and a damage-dealing special weapon.

Moving forward, an example of an encounter in which Divinity will still be great is Rhulk, as he has a small crit spot and is constantly moving. On the other hand, Oryx will be an encounter where using Divinity will be less than ideal compared to other debuffs once Divinity is nerfed.

What Debuffs will be best?

Currently, in the sandbox, there are only a few global debuffs. As a quick refresher, debuffs make a target take more damage, while buffs increase the damage you deal.

A buff and a debuff stack, but debuffs do NOT stack. If two debuffs are active, the game only applies the higher of the two. There are two categories of debuffs: 30% and 15%. Here are all of the debuffs in the game once Divinity is nerfed. 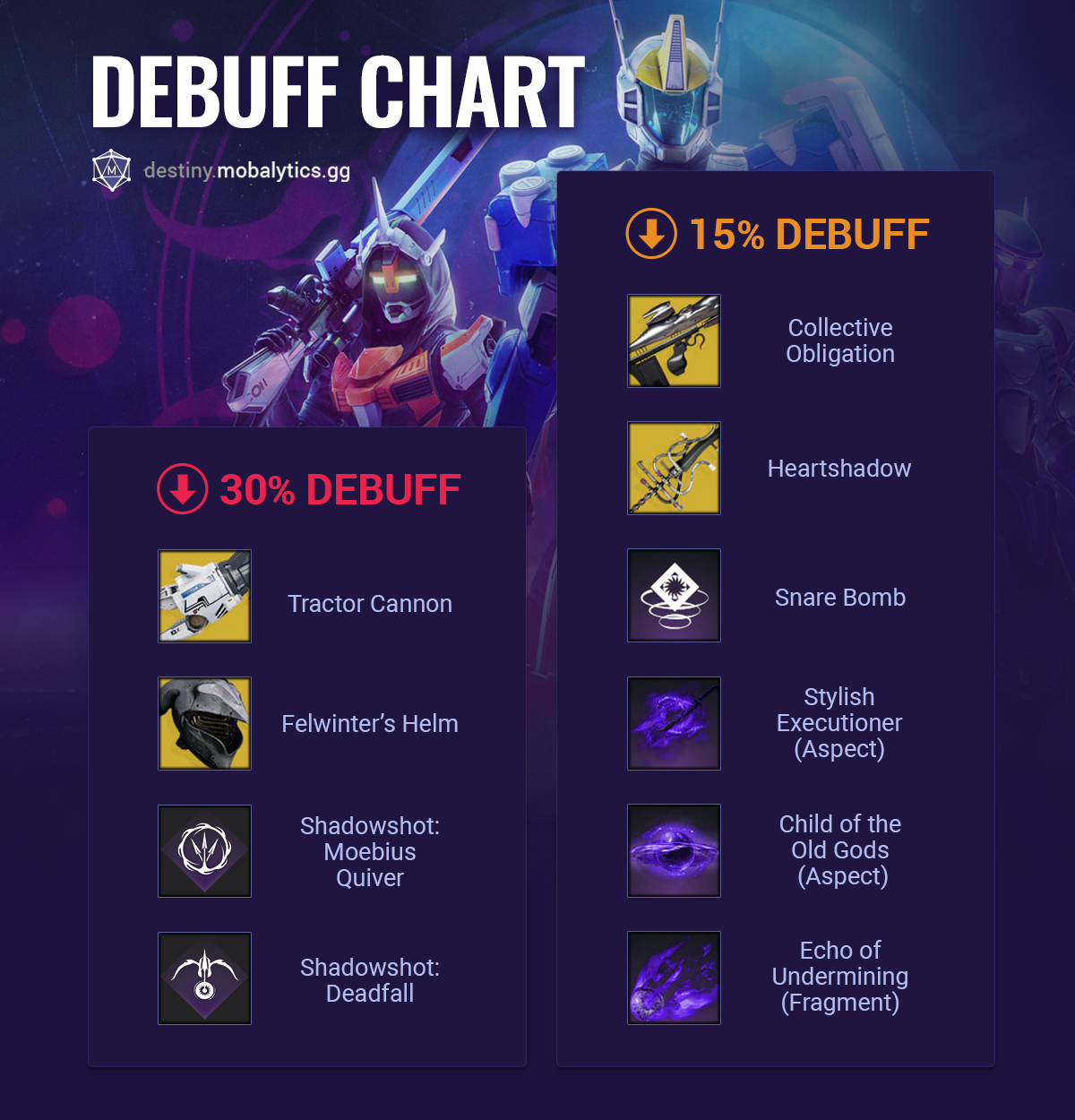 Three main points need to be thought about with applying debuffs: how strong the debuff is, ease of use, and uptime. The chart above shows the strength of each debuff. Ease of use dictates how easy or hard it is to apply the debuff. And lastly, uptime is how long that debuff lasts.

Of the 30% debuffs, Shadowshot and Tractor Cannon will be the best choices as they are the easiest to use. And of the 15% debuffs Echo of Undermining and Snare Bomb will be the best as they will go alongside Void Hunters using Shadowshot.

A Void hunter can theoretically shoot Shadowshot, then throw a Snare Bomb and Grenade with Echo of Undermining to apply a debuff during most of, if not all of a damage phase. Void hunters will be a lot more desirable once Divinity is nerfed on easy-to-headshot bosses.

On bosses that are able to be damaged up close, Tractor Cannon will be a very good option.

Was the Divinity Nerf Justified?

News of the nerf was quite controversial amongst the community. This makes sense given a weapon that has been a staple in the game for years is being changed. In the current sandbox damage phases have gotten rather stale, so a shakeup can be a good thing for the game.

Currently, Linear Fusion Rifles are the best option for damage, which is a precision weapon that requires good accuracy.

These weapons would normally create a risk/reward balance in hitting precision shots that gives the most optimal damage, but the issue is that Divinity gives the best debuff and trivializes needing to be precise with Linear Fusion Rifles, as the crit spot becomes very easy to hit.

Therefore there is really no need to be precise with the highest DPS weapon, and there is no risk in missing shots, only the reward in having the highest DPS possible with none of the drawbacks.

This change will potentially bring in new weapon archetypes and debuff forms as the optimal form of damage based on the encounter type.

Long-range encounters with hard-to-hit precision shots can still use Linear Fusion Rifles with Divinity, if hitting precision shots are hard then Shadowshot can be used, and if it’s something up close then Tractor Cannon may become the best option.

This change will add diversity to the sandbox and open up more options for future encounter design as the design needs to be built around the current power of Divinity which is undoubtedly the clear best means of DPS.

Options and diversity will be a good thing for the sandbox in terms of team play, load-outs, and future weapon design. Because let’s be honest… using Divinity is not fun nor exciting.

Looking for more breakdowns? Check out our other Destiny 2 Weapon Discussions.