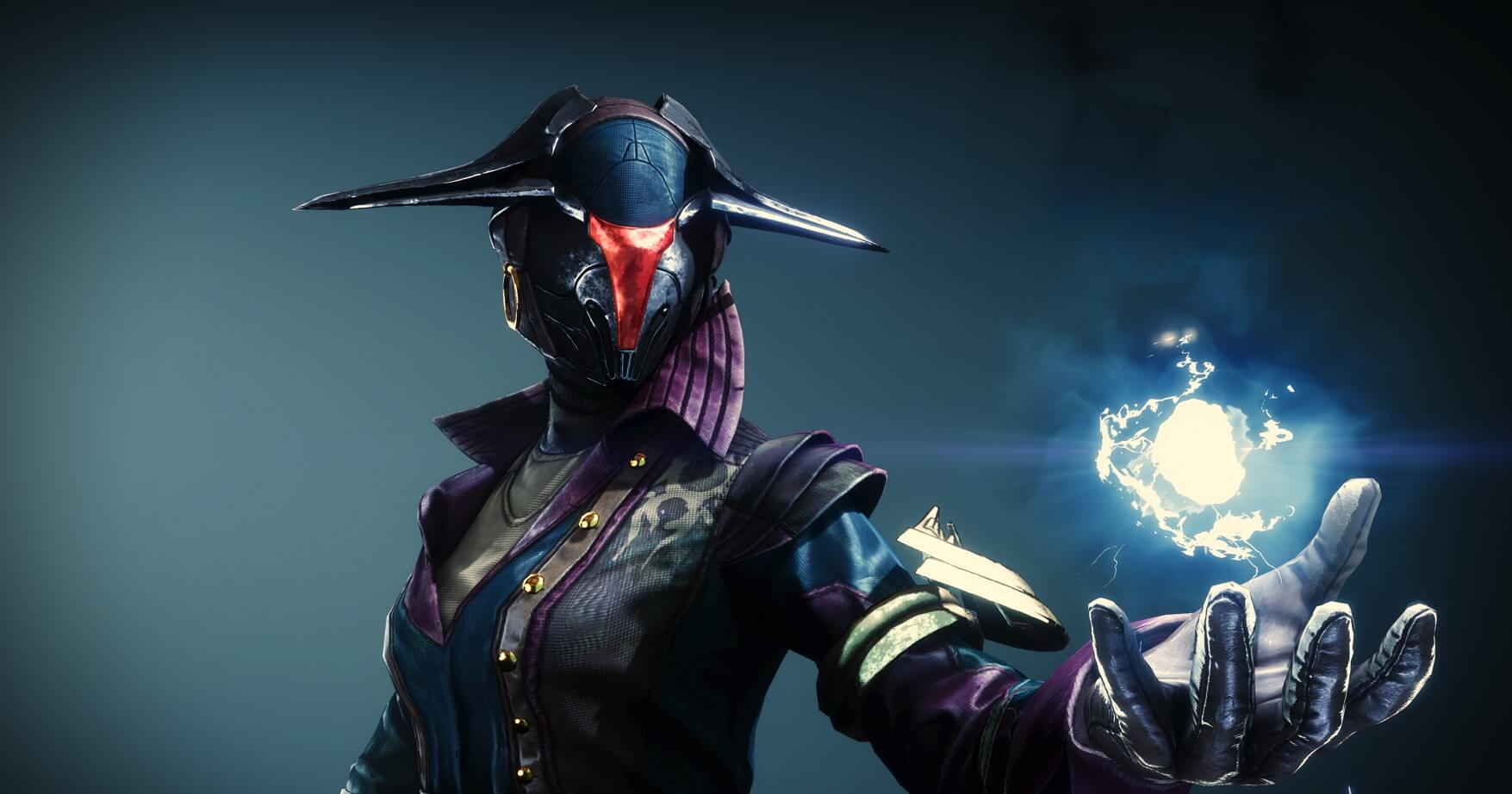 Arc Warlock has been a staple of the game since its introduction in Destiny 1.

The rework to this class brought on some interesting melee options that PvP players will enjoy playing around with.

And for PvE players, this class rework was conveniently released with an exotic helmet that synergizes very well with the class that allows for ability spam.

Be sure to also check out our Arc Titan 3.0 builds and Arc Hunter 3.0 builds. 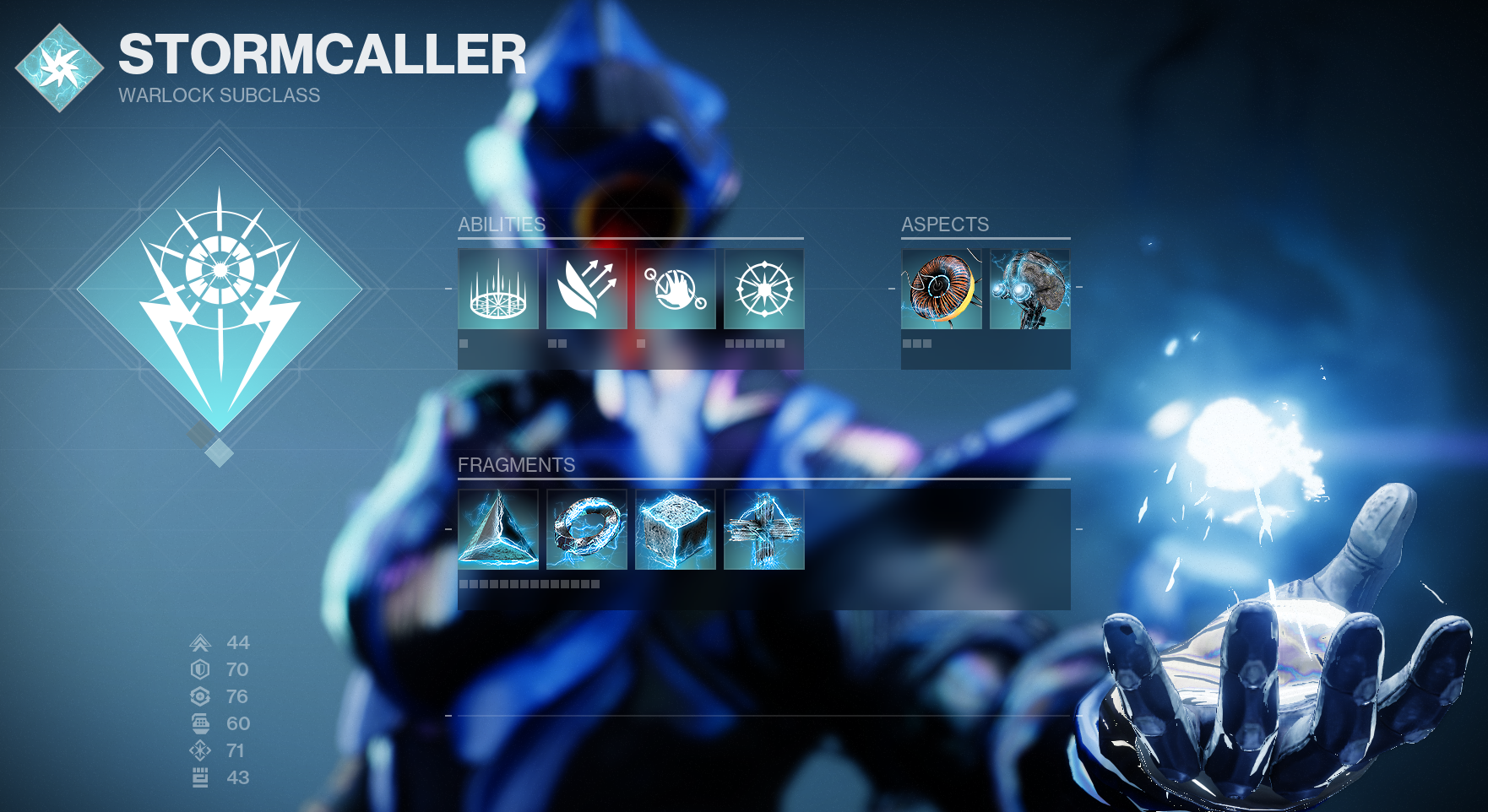 Amplified – A buff in which a guardian can run faster, slide further, and have improved weapon handling. This buff is not accessed through any Aspects nor Fragments but is rather intrinsically built into Arc 3.0 and received after defeating multiple targets with Arc damage. A guardian with the Amplified buff will receive more bonuses after sprinting which include even faster sprint speed, a PvE damage resist bonus and a longer slide length.

Ionic Traces – This isn’t a new keyword per se, but is a key portion of the new Arc rework. Ionic Traces were only available for Stormcaller, but are now available for all classes and give back ability energy once they are picked up, similar to stasis shards.

Now that you know the new Arc terms, let’s get into the builds.

This class has found its place as an enemy clearing class. Chaos Reach deals a lot of damage, but it is over a long period of time, which is why Stormtrance is the option as it is a great means of clearing out dozens of enemies. The class now being able to ability spam supplements the super well for the same ad clearing purpose.

Super: Stormtrance – As mentioned in the last section this is the super to go for to clear out multiple enemies as Chaos Reach doesn’t quite dish out enough DPS to justify using.

Movement Ability: Burst Glide – You can move the fastest with this jump ability. Jump, then on the way down double tap the jump ability for a small boost.

Grenade Ability: Pulse Grenade or Storm Grenade – These two grenades are the best area of effect grenades right now. Play around with both as they both have their own merits in that Storm is better for groups and Pulse for single target damage.

Electrostatic Mind: Defeating a Jolted target or an enemy with an Arc ability spawns an Ionic Trace.

Arc Soul: Anyone who passes through your Rift including yourself gets an Arc Soul. Your Rift also recharges faster when surrounded by allies.

Spark of Resistance: Increases damage resistance when surrounded by enemies and increases strength by +10

Spark of Amplitude: Rapidly defeating targets while Amplified creates an Orb of Power

Spark of Recharge: When critically wounded your grenade and melee recharge faster

Discipline: Your grenade is the ability that can Jolt and defeat the most targets for Ionic Traces, so you want this as frequently as possible.

Recovery: This is tied to Rift cooldown,  so you want to prioritize this stat for the cooldown on Healing Rift for survivability, but also for giving Arc Souls to your team for DPS.

Fallen Sunstar: Ionic Traces move faster towards you, they give you significantly more ability energy, and they give teammates ability energy. This exotic makes this class much stronger and it is highly recommended to farm for it in Lost Sectors.

The Stag: A defensive exotic which gives you and your allies a 25% damage resistance boost in your Rift. It also increases Rift recharge rate when critically wounded which will make your already fast Rift recharge rate even faster.

Elemental Ordnance: Grenade final blows create an elemental well. You’ll be throwing a lot of grenades and getting used of this mod.

Grenade Kickstart: Lessen your grenade cooldown even more with this mod to take advantage of the last two mods more often.

Ashes to Assets: Grenade kills grant super energy. You’ll be throwing your grenades often, and this will help you get your Super more often. 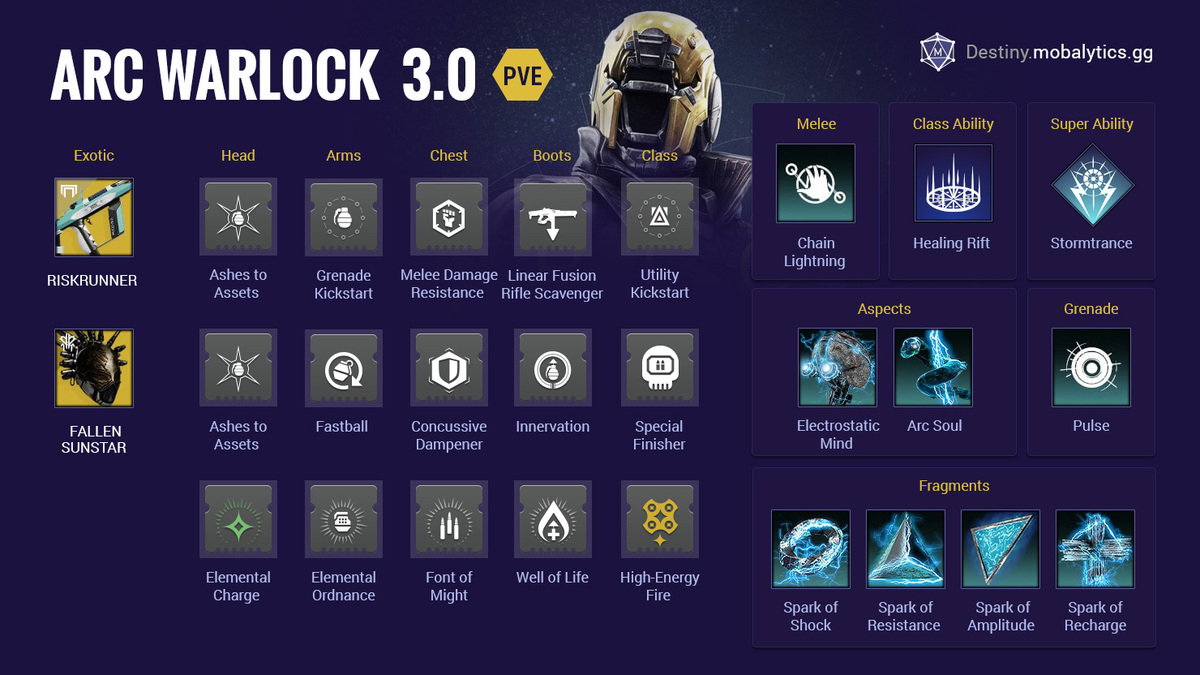 The only time you’ll be using your guns is for dealing single-target DPS. Your class itself is for dealing handfuls of lower health enemies. Use your abilities to Jolt targets and killing them will result in you getting energy ability from Ionic Traces.

With Fallen Sunstar this is only enhanced by giving you more energy, and your teammates’ ability energy when you collect the plethora of Ionic Traces you’ll be making. Your main form of survivability is in your Rift.

If using abilities properly you’ll have your Rift available almost enough that you’ll be able to use it once the last Rift expires. This is beneficial to do not only for the constant healing the Rift provides, but to ensure you and your team have an Arc Soul available at all times for extra damage.

There is no downside to having an Arc Soul, so take advantage of it.

The new melee abilities added some diversity to this class. Ball Lightning adds a potential safe range play and the Lightning Surge aspect for a strong and very fun close range option. Otherwise the class plays like a standard warlock of staying entrenched in Rifts to play for map control.

Super: Stormtrance – This super got a massive PvP buff now that it intrinsically has Landfall and Ionic Blink. Landfall makes it a pseudo-shutdown super, and from there you can play it as a strong roaming super with help from Ionic Blink.

Class Ability: Healing Rift – Gives you a big edge in fights if the opponent commits to it while you are in a Rift.

Movement Ability: Burst Glide – You can move the fastest with this jump ability. Jump, then on the way down double tap the jump ability for a small boost.

Grenade Ability: Arc Bolt – You want to make sure your grenades hit for damage to spread Jolt to enemies, Arc Bolt is very easy to land as it locks on to targets.

Lightning Surge: If playing close range or long range this ability is useful. It’s a great way to close the gap, but can also be used as an escape tool if needed. This also does not take away your melee ability and you are still able to use it as if you didn’t have this Aspect equipped.

Spark of Recharge: When critically wounded, grenade and melee recharge rate is faster

Spark of Momentum: Sliding over an ammo brick reloads your weapon and gives melee energy

Recovery: Allows you to get back into fights faster as well as lowers your Rift cooldown.

Strength: Lightning Surge is very good, as you may have noted, melee cooldown was a common theme of the Fragments.

Transversive Steps: Another strong neutral game exotic which helps you relocate faster and/or to close the distance on targets,

The Stag: Rifts are strong, this makes them stronger with Damage Resistance and can make its cooldown faster when you are critically wounded.

Utility Kickstart: This lets you cycle rifts more often, allowing you to hold areas of the map with more ease.

Melee Kickstart: You will be using your melee a lot, this will supplement the cooldown on top of Ionic Traces.

Impact Induction: You will be dealing a lot of damage with your melee, this will give grenade energy for dishing out melee damage. 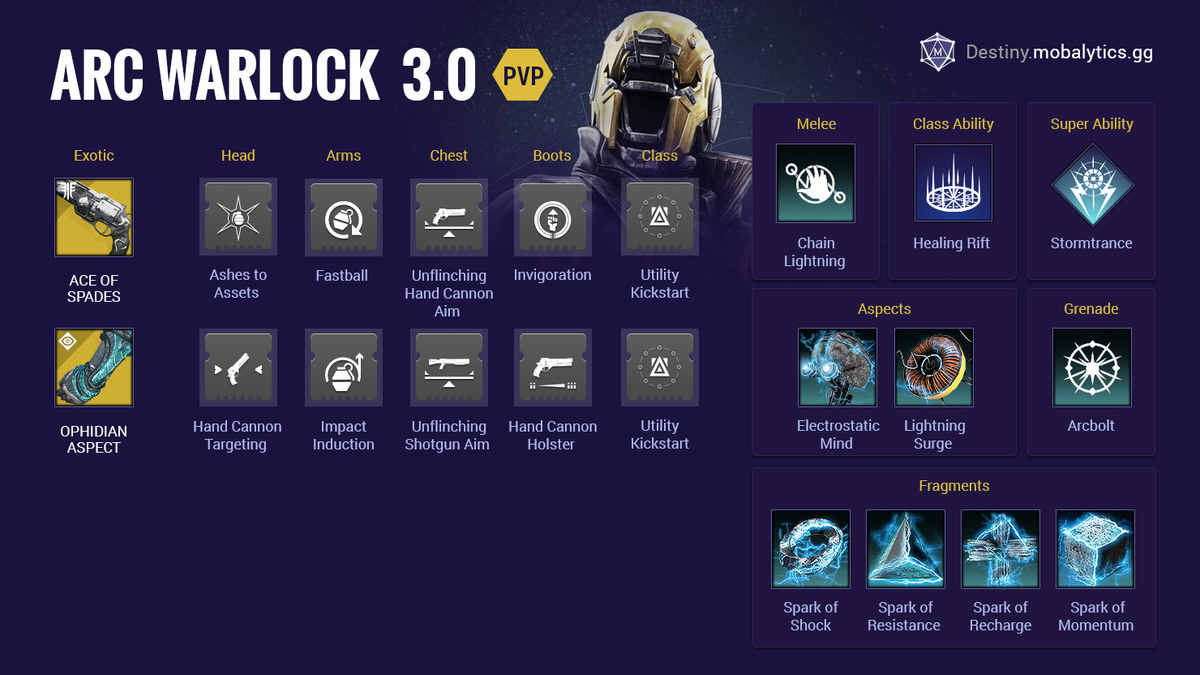 The main tools in your toolkit are your rift, grenade, and Lightning Surge melee ability. Your Rift helps you hold a position and take map control as you have a massive advantage in fights when you are in your Rift.

Take advantage of it by peek shooting, and dipping in and out of cover to heal in between shots. Your Arcbolt Grenade is very strong in groups of enemies as it quickly chains targets and spreads Jolt between them. If your grenade hits multiple targets, it will Jolt multiple targets and they will potentially spread enough damage to one another for you to defeat them both.

This is what happens in the adjacent clip, and note that Arcbolt Grenade’s energy is fully refunded because of Electrostatic Mind. Electrostatic Mind also gives back energy to your other Aspect Lightning Surge.

This ability can be used just like a Seismic Strike in which you slide, shoot a shotgun, and then activate the melee ability to finish an enemy.

It can also be used as an escape tool to cross sight lines or to reposition.

Last thing to note is the Super. Stormtrance operates both as a roaming and a shutdown super. Landfall allows you to kill other supers if you float above them and deal some damage outside of Landfall.

When roaming use your sprint button to activate Ionic Blink to make yourself harder to hit. This is important because this super doesn’t have excessive damage resistance, and requires 3 ticks to defeat an enemy, as one tick deals 91 damage.

Arc Warlock isn’t as flashy as Titan throwing massive grenades or Hunter dealing 1 million melee damage, but it should not be slept on. This class has its roles in PvE and PvP, it’s just a matter of knowing your limits and how to play around your abilities as they have specific, but purposeful uses.