We are looking at Arc 3.0 builds for the Hunter. These builds are solely based around the class’ melee as that is the focal point of the aspects.

Throughout the history of the game, Arc Hunter with Liar’s Handshake had a few moments in which it was the best way to deliver DPS in the game.

Arc 3.0 doesn’t make this class by far the best form of DPS in the game, but it does make melee builds a very strong form of DPS that has defensive aspects to it.

And most importantly there won’t be a patch in 2 weeks that will fix whatever bug caused Liar’s Handshake to deal significantly more damage than anything else in the game akin to the few times Arc Hunter had the best DPS in years past.

Be sure to also check out our Arc Titan 3.0 builds and Arc Warlock 3.0 builds. 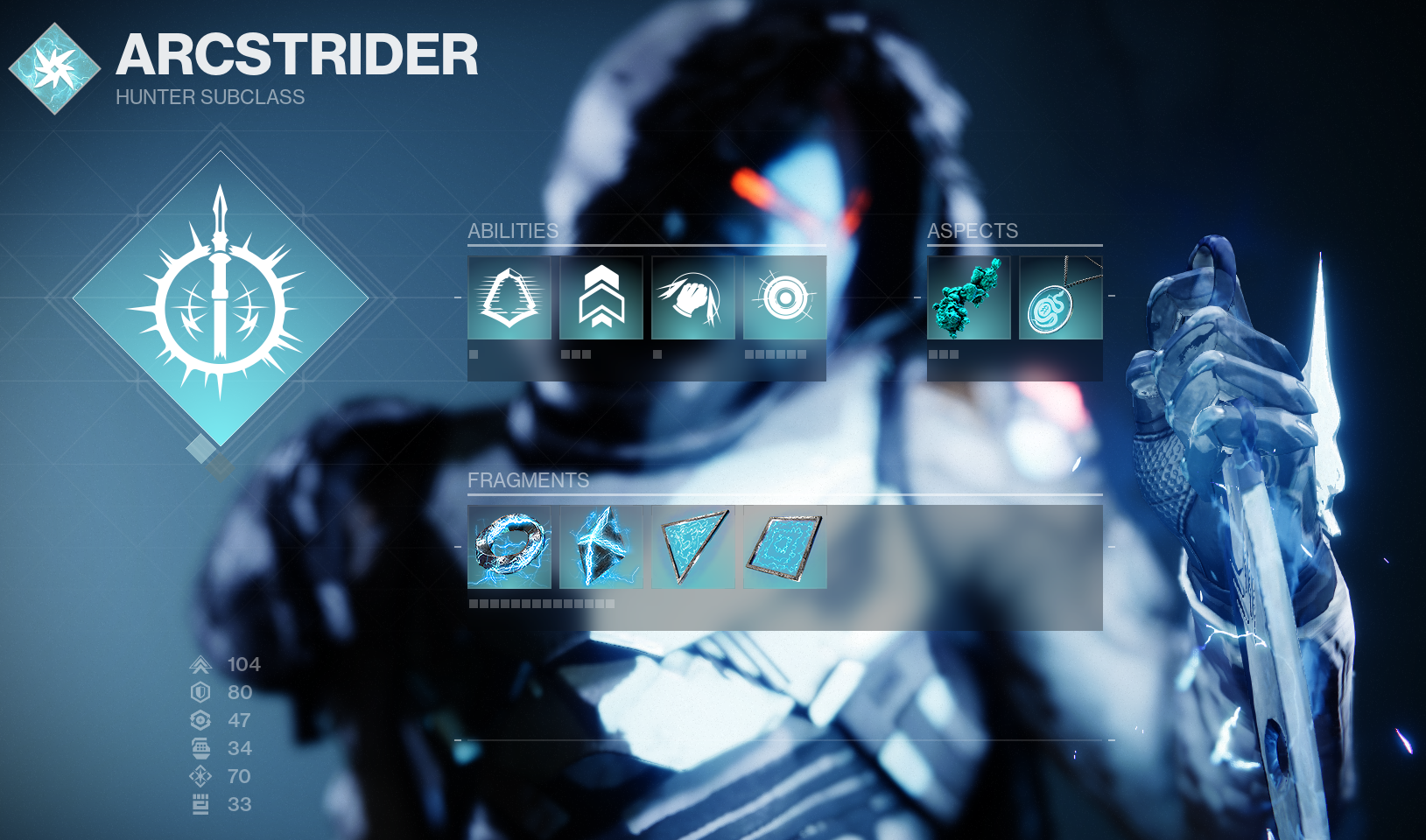 Amplified – A buff in which a guardian can run faster, slide further, and have improved weapon handling. This buff is not accessed through any Aspects nor Fragments but is rather intrinsically built into Arc 3.0 and received after defeating multiple targets with Arc damage. A guardian with the Amplified buff will receive more bonuses after sprinting which include even faster sprint speed, a PvE damage resist bonus and a longer slide length.

Ionic Traces – This isn’t a new keyword per se, but is a key portion of the new Arc rework. Ionic Traces are currently only available for Stormcaller but will be available for all classes moving forward and give back ability energy once they are picked up similar to stasis shards.

Now that you know the new Arc terms, let’s get into the builds

Arc Hunter is built around stacking damage bonuses for melees. With all potential buffs active, you can deal roughly 30 times damage with a melee. This is a very dangerous playstyle, so there is some protection built in to allow you to punch things to your heart’s content.

Super: Gathering Storm – A solid super for both ad clear in a confined area and for boss DPS. The PvE option over Arc Strider which takes too long to dish out damage

Class Ability: Gambler’s Dodge – This build is based around melee, so getting your melee back on dodge is great. This dodge does have a longer cooldown, but many parts of this build lowers class ability cooldown.

Movement Ability: Triple Jump – This is preference, just don’t be a maniac and use blink in PvE.

Melee Ability: Combination Blow – The ability allows your melee to do the following on a kill: deal more damage, heals you a small amount, and completely recharges dodge. This ability synergizes very well with what this build is accomplishing.

Grenade Ability: Pulse Grenade – This grenade is quite versatile in that it is a good for ad clear and can deal solid damage to a single target as well.

Lethal Current: After a dodge, your melee will Jolt a target and create an explosion, and meleeing a Jolted target will blind them. If you melee a Jolted target they will become blinded, preventing them from shooting at you.

Spark of Amplitude: Rapidly defeating targets while Amplified creates an Orb of Power

Spark of Feedback: If an enemy melees you, your melee deals more damage

Resilience: 40% damage resistance; you’ll be in the thick of things with this build, and the extra bulkiness is great for staying alive in more difficult content.

Mobility: Your dodge will get you your melee back, so you should invest in Mobility which will indirectly make your dodge and melee abilities come back sooner.

Liar’s Handshake: This exotic is one of the main buffs to your melee damage. Note that the damage buff is after you are hit by an enemy melee or use your Arc melee ability, so be sure to melee twice in a row before dodging again.

Assassin’s Cowl: Most associate Liar’s Handshake with Arc Hunter, but Assassin’s Cowl is a top-tier exotic and works with this class too. It allows you to gain back a little extra health and go invisible on a kill to completely disengage from a fight if things go south.

Melee Wellmaker: Melee’s final blows will create an elemental well. You will be spawning Arc elemental wells with this build and mod. 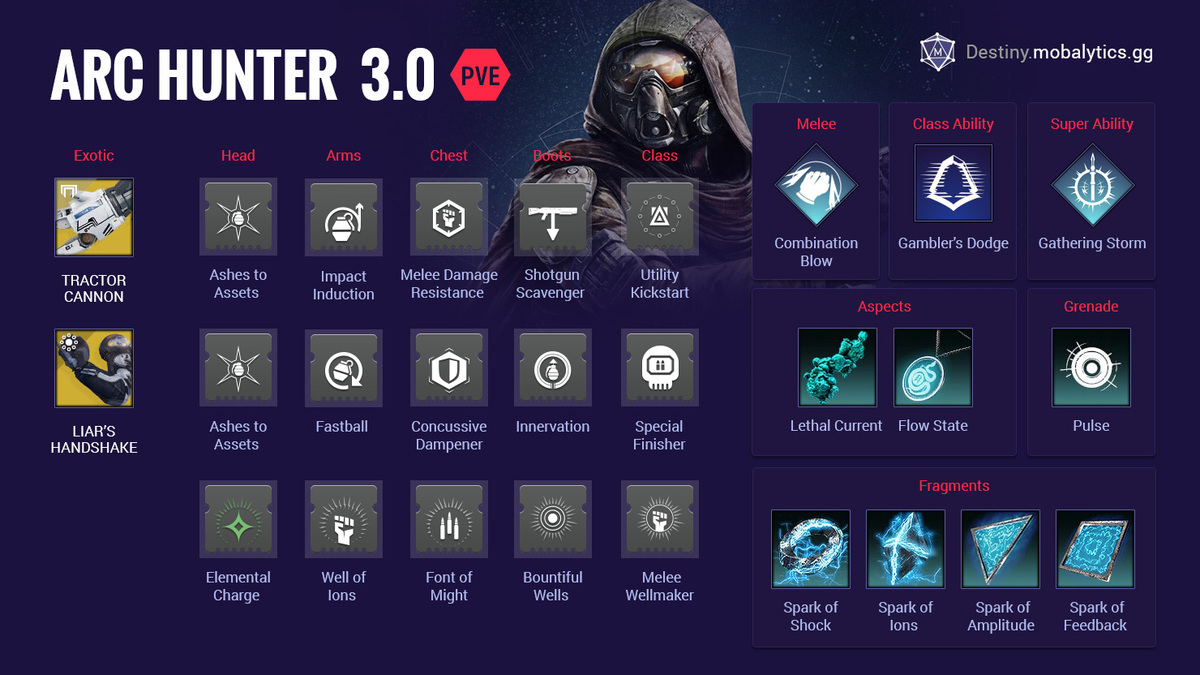 The main flow of this class is cycling dodges and melees while building up and activating the buffs that increase your melee damage. Knowing what your buffs do and how to activate them is key.

Combination blow can be built up to 3 stacks, and a stack is gained on a melee kill. Lethal Current will add an explosion to your melee if you dodge before it. Well of Ions will buff melee damage when picking up an Arc elemental well which will be created on every melee kill from Melee Wellmaker.

Spark of feedback is the last built-in way to improve melee damage in which an enemy melees you, you receive a melee damage buff. You can further supplement melee damage with weapons and exotics, running a shotgun with a one-two punch and Tractor Cannon are great options for weapons.

Liar’s Handshake is an exotic armor for melee damage and your major damage bonus is either after being hit by a melee or on your second melee.

Your main combo will be dodge, shoot with Tractor Cannon and/or One-Two Punch Shotgun, melee, melee, repeat. The second melee will do the most damage because you will have bonus damage from Liar’s Handshake.

It’s just as easy as that. If you are in more difficult content and have difficulty staying alive, make sure you are expending your melee ability on a target that will be killed by it for a health boost or try Assassin’s Cowl as your melees will heal you and make you invisible.

Arc Hunter will play quite similarly in PvP as it does in PvE except for use of Blink, which is now on Hunter and received a buff. Blink helps close the distance on enemies so you can get in melee kills to get rolling.

Super: Arcstrider – This super is great for roaming and actually fights very well against other supers. Gathering Storm doesn’t quite deal enough damage to justify it over Arcstrider as a shut-down super.

Class Ability: Marksman’s Dodge – This cooldown is a little quicker and is great to quickly reload a shotgun if you pick up ammo in the middle of a fight.

Movement Ability: Blink – This jump feels great now. It is a lot less clunky and allows you to get your weapon out as you are closing the distance on an enemy and it can disorient them by blinking above them.

Melee Ability: Combination Blow – This pick is more so for the benefits this melee gets outside of the damage in that you get health back and recharge your class ability on a kill.

Grenade Ability: Skip Grenade or Arc Bolt – You’ll be up close with this build and these grenades deal their damage quickly to allow a melee finish or to zone an area.

Lethal Current: After a dodge, your melee will Jolt a target and create an explosion which allows you to damage an enemy only a little bit before a melee results in a kill.

Flow State: Defeating a Jolted target makes you Amplified. Defeating an enemy you hit with a melee will make you amplified and with the speed boost, one Blink will get you halfway across the map.

Spark of Recharge: When critically wounded, grenade and melee recharge rate is faster

Mobility: Lets you jump higher with Blink and to get your dodge as fast as possible.
Strength: To get your melee back more quickly if you opt to run Marksman’s Dodge.

Wormhusk Crown: After killing one enemy and refreshing your melee bonuses with a dodge, use this exotic to get an extra bump of health to stay in the fight for sustainability.

St0mp-EE5: Increase your sprint speed and jump height to close the gap on enemies and to get above them so you are harder to hit.

Shinobu’s Vow: Gives you two skip grenades that will easily tag targets to Jolt them. A combo to do is throw a Skip Grenade and Blink at an enemy to melee them to finish them or shotgun them.

Utility Kickstart: This will give you half your dodge cooldown back after dodging. 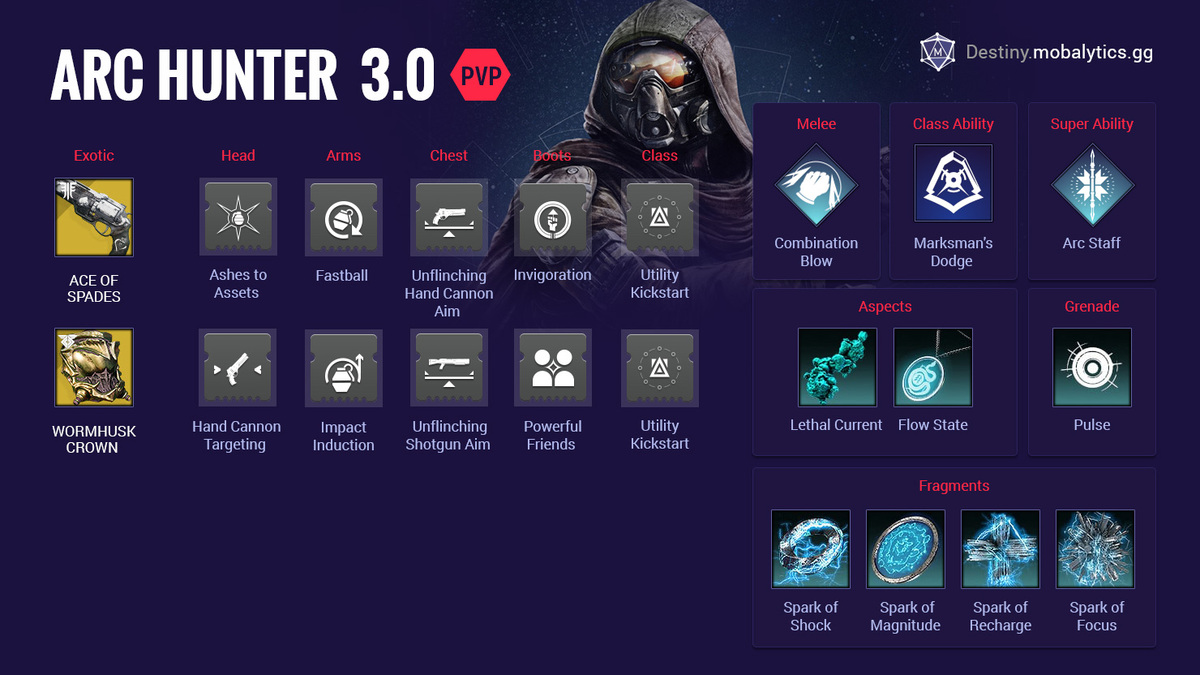 What this class is trying to accomplish is quite simple, and consists of throwing a grenade at an enemy, Blinking at them, hitting them with a shotgun+melee, and then dodging away if needed.

Executing that properly is much more difficult than the description. Blinking into a group of 4 enemies will result in a death. Be cognizant of Blinking into areas which have cover to prevent being shot from far away teammates and to use while your health comes back, has no more than 2 enemies max, and has an escape route if needed.

When blinking try to make it such that you will go over or land on top of an enemy. Even when using a mouse and keyboard, tracking someone in Blink going over your head is very hard to track which will allow you to get in a shotgun+melee and doge away. The other thing to be aware of is not overextending.

Sometimes getting one kill and leaving the fight is the best play even if there are more enemies in the area. Shotguns are typically the tool of choice with the class, but Glaives are definitely worth a try for a quick 2 melee attacks.

Now with some extra tools, this class has a lot more to it than stacking melee damage. The rework brought along a lot of tools to stay alive and now with more exotics in the game, there are more synergies with this class.

This class is now usable in the most difficult of content and is no longer a means to cheese certain bosses.