Jungler’s often have the highest impact in the game and can easily take over games on their own. You can easily become a better jungler if you follow the steps of this guide and escape low ELO really quickly. This article is written by a challenger jungler named Xphstakhs whose peak was rank 26.

The jungle is the hardest role to master as it requires a lot of self-discipline, game knowledge, and the ability to be in multiple places at once. In this Mobalytics guide by Xphstakhs, we will be focusing on how to climb in low ELO as a Jungler: focusing on paths and objectives.

What is low elo? 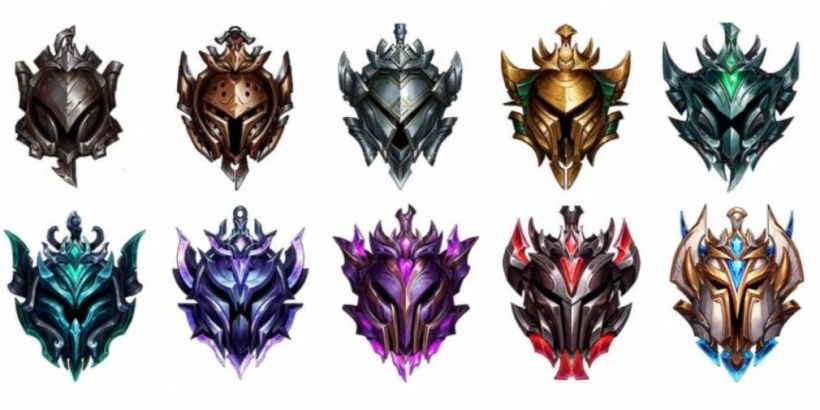 In this guide, we are gonna set the benchmark, that anything below Emerald is low ELO. Some of you may not agree with this but this is okay.

First of all, you will have to know what the best jungle path is. Right now the best way to start your Jungle clear is by starting at the Krugs. You start there since they give a lot of gold and Experience and are easier to kill than any other camp level one.

Then you proceed to full clear your whole red side and you will be level three faster than most of your enemy junglers in these ELO’s, since this is a path mostly players in high ELO use.

After you cleared the red side you want either to gank or take the crab in the river. Preferably you want to take the crab since it’s guaranteed gold as well as vision in the whole river for you and your team.

After you got your crab and you are level four you can look for gank in the midlane since you will be higher level and most likely burn the enemy’s flash or even kill him.

After a successful gank in the midlane you want to move and either take the other crab if it is still alive. If it is gone you want to move to your blue side and clear these camps too. After two more camps, you will most likely be level five and unlock your ultimate ability. If you follow these steps you will already have an upper hand over the enemy jungler.

There are 4 different dragons in Wild Rift like in League of Legends. Each of them has a different element and gives different permanent buffs. Your ultimate goal is to get all 3 drakes before the Elder one spawns since these buffs will allow you and your team to overcome the enemy. The different elements are fire, cloud, mountain, and ocean. 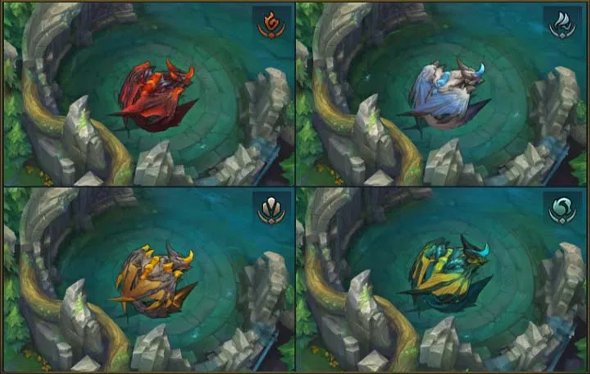 You should always be around the dragon pit when one of them spawns and be ready to fight for it, since you are the one that wants to get the permanent buff and not the enemy team. To get to this goal you will have to kill the enemy jungler and ward in the right positions to have vision of the enemies. The points you want to ward are marked yellow on the map below. 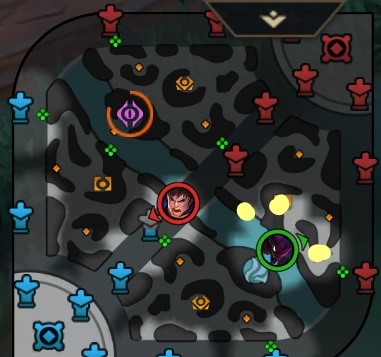 Of course, there are some drakes that are more important than the others. For example, the highest priority is the infernal drake since he is the ones that give your team permanent damage. Second, on that list is the cloud drake that gives permanent movement speed.  The other 2 drakes aren’t as important as these we mentioned.

The next objective we are going to focus on is the Rift Herald, since it’s the main one, that is going to most likely give your team that first tower gold. Apart from that, it can give you and our laner plating gold that can be used to access more items.

Once it spawns try to be there in time and ping your top laner or mid laner to assist you with it since it’s much easier to hit the eye of it from behind and kill it fast.

Ganking is one of the most important tasks in Wild Rift since it can help you and your laner to get kills that can be translated into items then. It will be very hard to win a game if you don’t gank and let the enemy Jungle do it and punish your lanes. Knowing when and how to ganks is very important. The first thing you do before you gank is watching the map and watch which lane is pushed into your lane tower to see if there is an opportunity and space to take advantage of. 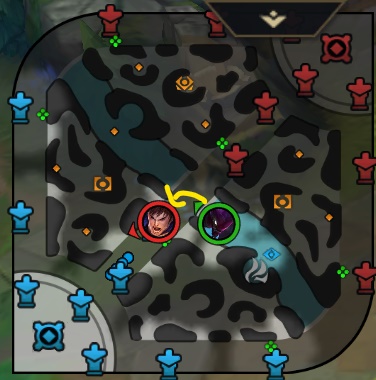 Then you want to see which of your laners has CC if the Champion you chose to play has already CC in his kit you don’t need to take that in mind. Try also to gank lanes that are already low hp or started a fight and have no summoner spells or any abilities to escape. Before you gank ping your laner so you know that you are on the way. If there isn’t a single lane pushed into your laners, try to anticipate which lane the enemy Jungle my gank next to be able to countersink him, or look for someone who is low hp under a tower to dive him with your laner.

To have success as a jungler in the lower brackets of the ladder can be exhausting sometimes. But once you follow the steps we showed you in this article you will have a much easier time and see improvement game by game.

If you have any questions or comments please leave them down below we can answer them for you.