Team Liquid’s Robinsongz is one of the top NA TFT players, and his performance in Set 5 and 5.5 have been one of the most dominant for an NA player.

He’s maintained a top ladder position in NA for basically the entire set and finished with 5 1st place games out of 6 in the NA Regional Finals.

The meta shifted a lot throughout the set, and it was clear he mainly preferred to go for an AD comp like Aphelios or Draven for the Reckoning Championship patch.

In this interview, we’ll discuss his performance at the Reckoning Championship and other thoughts about the game as a whole.

For more details on his match history, check out Robinsongz’s TFT Profile. 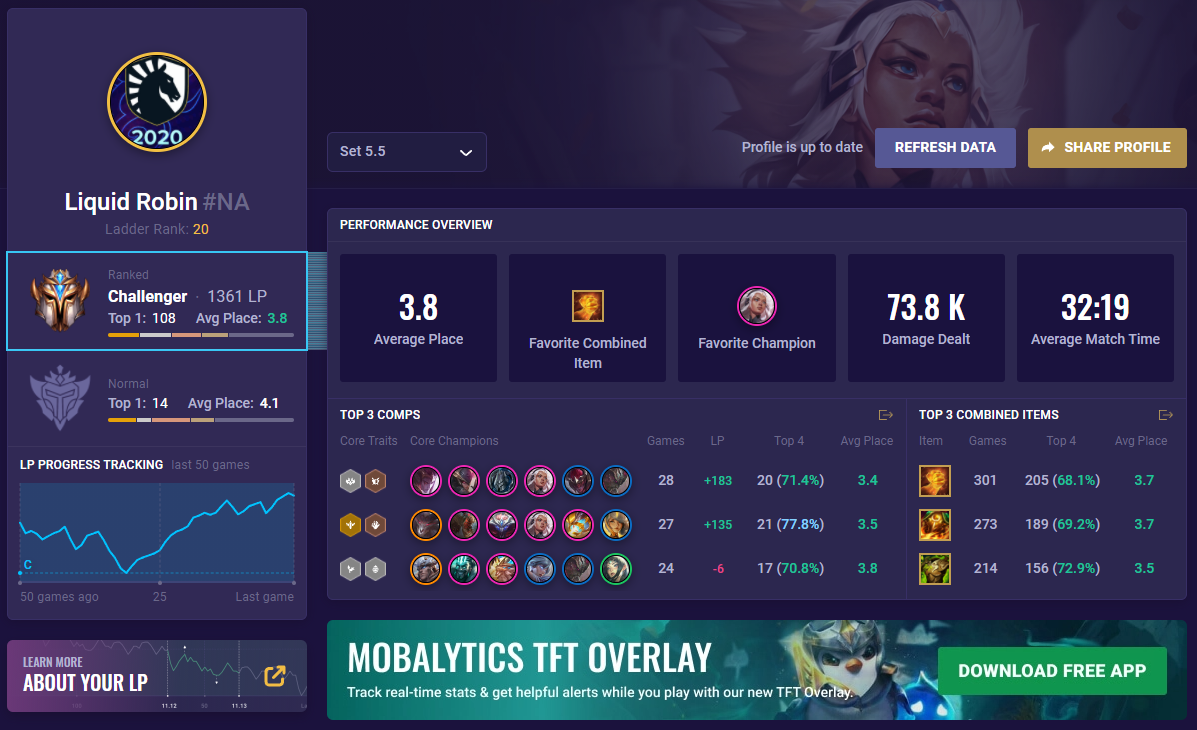 If you missed the TFT Reckoning World Championship, catch the VOD on Twitch.

Mobalytics: What do you think you could have done better at Worlds? How different was the experience at the Championship compared to Regionals?

I could have prepared better – reached out to more people for coaching and getting different perspectives from different people. I leaned AD way too much when Vel’koz is one of my best comps.

The experience for Worlds was completely different than Regionals mainly due to the time difference. I had to adjust my sleep schedule to wake up around midnight and sleep in the afternoon.

The event was played from 2 AM – 6 AM and I was super not used to this.  All the tournaments I’ve played started in the afternoon, so my mental was definitely not in the best place. 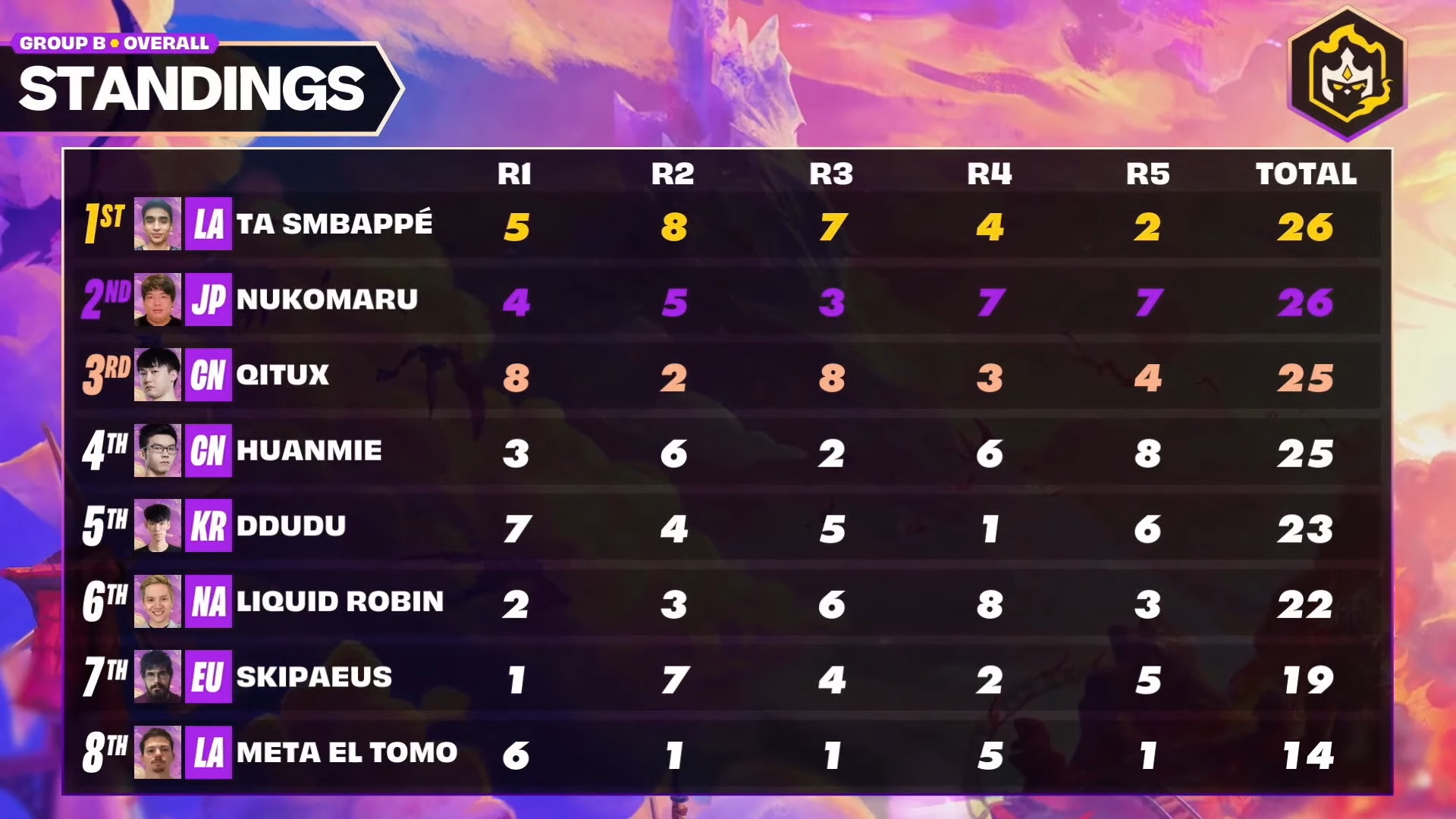 Looking back at my games at Worlds, there were key mistakes I made that I probably would not have made if my mental was in a better place – I was more nervous than usual.

The pace of the game was also very different compared to Regionals.

My lobby had 4 Asian players and they rarely roll at 3-2, they don’t play for mid game – so Stages 2 and 3 were often super weak but come Stage 4, their boards would spike really hard and I wasn’t used to the tempo.

In a podcast you appeared on, you spoke about how preparing for a tournament is mostly jamming a lot of games in. Do you feel you were well prepared for this tournament? Or did the tide simply not go your way this time around?

I wasn’t really prepared for this tournament mainly due to the shift in meta from Regionals patch to this.

Even though I jammed a lot of games in, my game plan was not very good so these games were very inefficient for preparing. It’s like you’re doing the wrong things over and over again.

I should have reached out to people who were climbing that patch and asked for help.

Leading up to the Championship, I went from 1800 LP to 1000 LP in a matter of 2 weeks but I just chalked it up to not playing seriously and trying out new things when in reality – the way I was playing was outdated.

I also didn’t get the best luck at Worlds, but I definitely could have made it to finals if I prepared better.

What did your strategy look like going into the tournament? At Regionals, you were very comfortable flexing between Jax and Lucian as your main strategies. You seemed to have a similar approach this tournament, except with Aphelios. What do you think was the missing factor in these games compared to Regionals?

My strategy going in was lean mainly AD, playing Draven/Lucian if given the boards, and Aphelios if high rolling. It’s not necessarily a bad strategy, but I realized why I’m not so good at Aphelios.

Back in Regionals, playing Lucian and Jax, I would roll at 4-1 pretty hard to stabilize.

At Worlds, when I was playing Aphelios, I would often not roll at level 7 and go straight 8 at 4-5, which was a crucial mistake I made for games 2 and 5.

I ended up losing 50+ HP on Stage 4 since it was an aggressive lobby with everyone rolling down at 4-1. 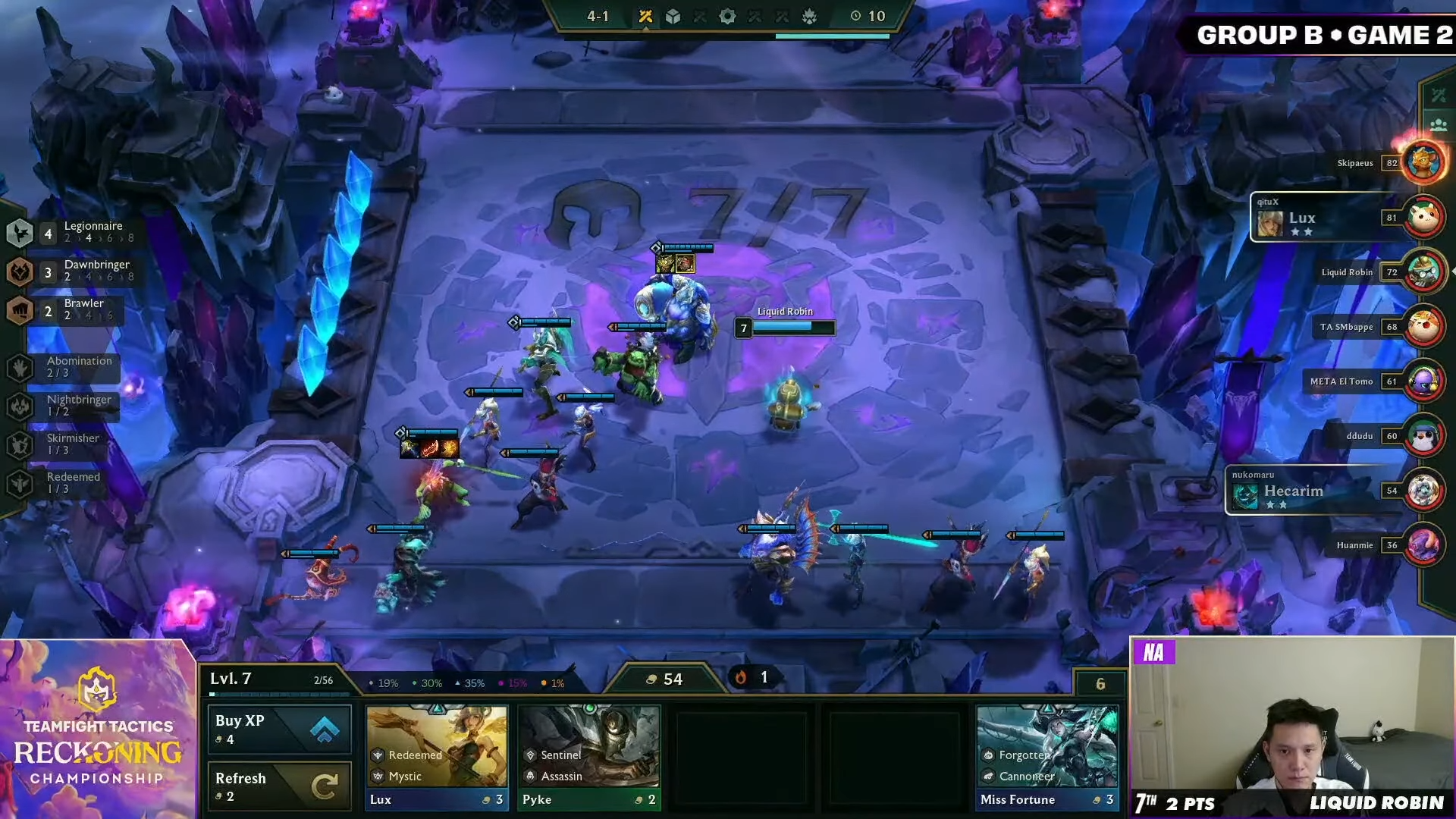 If I just rolled down at 4-1 like the rest of them, I would have made it to finals.

How do you feel about Kledge having the role it did at the Championship? For example, Milk forced 5 games of Kled in his lobby. Is it a necessary evil? Or do you think the game would be better without it?

I think Kled being that strong at Worlds was really bad.

When you hit with Kled you basically accelerate the lobby and win out almost every fight – mid-late game, it comes down to matchmaking RNG of who can face the Kled player least, and I think this is really unhealthy for the meta. 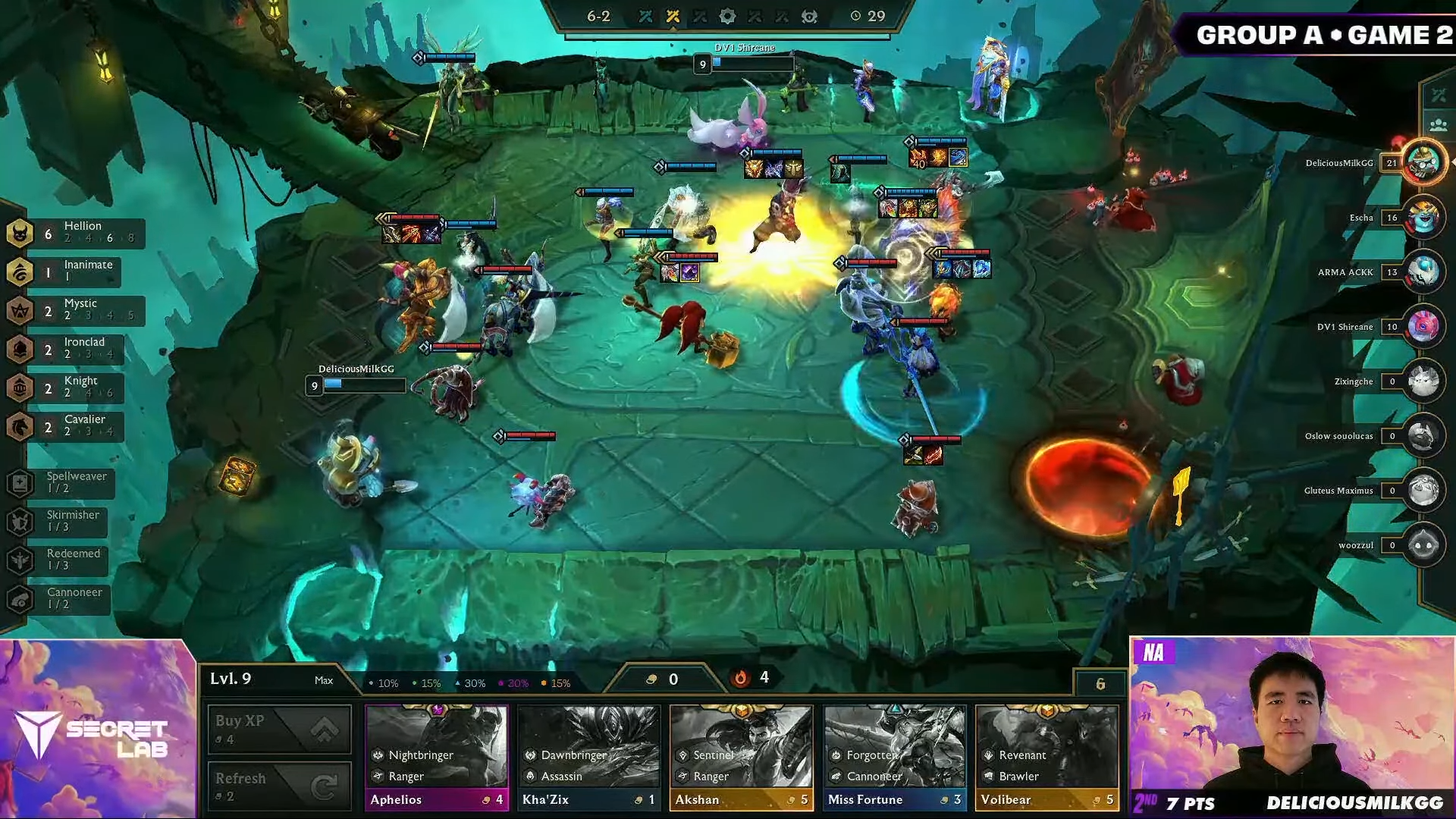 IMO Riot should have b-patched Kled, but it didn’t make Worlds UNPLAYABLE. If I was given the opener I would play Kled.

There’s honestly no counterplay to Kled other than dodging Kennens.

Of the four major regions (NA, EU, KR, CN), NA is now the only region to not have taken home a Championship title. In your recent podcast appearance, you ranked NA at the top of the region ranking – do you think NA is still the best region?

I think NA and EUW are still the best regions.

HUANMIE and QITUX are insanely good players, but I think the 4-1 rolldown meta extremely complimented their playstyles.

I don’t think me and SpencerTFT were playing at our best due to the time difference and Milk turning into a 1 trick.

I honestly don’t think this Worlds performance was a good representation of NA’s strength.

Where does Set 5 as a whole rank in your favorite sets so far (both enjoyment-wise and competitive)? Do you think having set mechanics with higher variance situations is a good direction for the game?

In terms of enjoyment, Set 5 probably comes a close second to Set 3, but competitive-wise, it’s probably my number one.

I was able to accomplish so much during this set that it will always be a special set to me – I got 2nd at MSI, 1st for Duos tourney, 1st at Regionals.

I wished I would have done a better job at Worlds to cap out an amazing set. 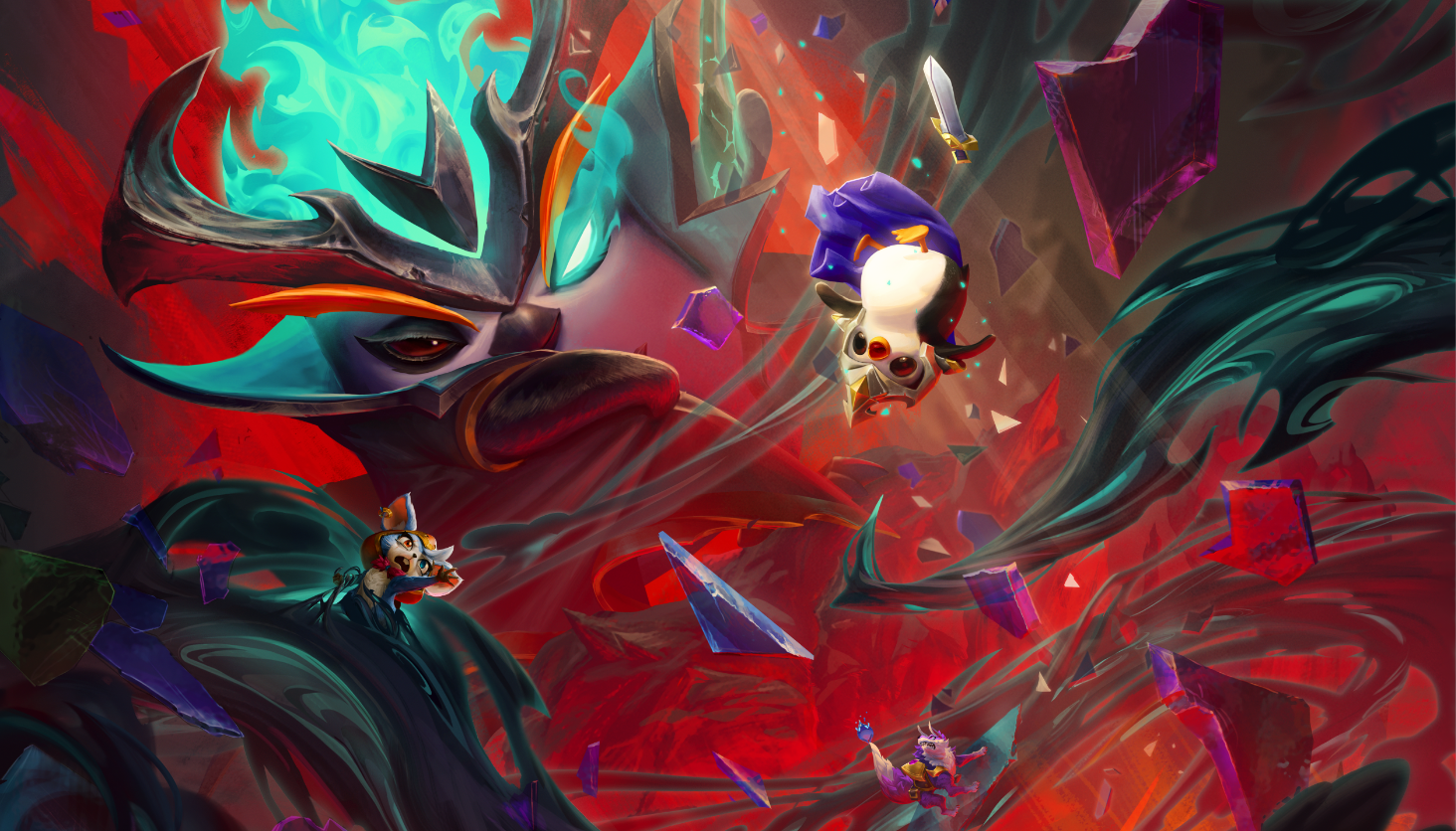 TFT is a unique esport due to its frequent changes, both with set updates and patch updates. Does this make being a pro TFT player something very difficult? Is it something you can imagine doing for years?

I think what makes a good TFT player is someone who can adapt to all these changes.

I for one was not able to adapt to the new meta and that is why I didn’t make it far in Worlds.

It’s something that I will take and learn from. I imagine myself competing in TFT for many years.

What advice do you have for any players trying to become a pro TFT player?

I would say don’t go into TFT trying to become a pro player.

Enjoy the game first, play the game a lot, actually want to improve at the game, and if you end up getting Rank 1 and starting a following on Twitch, then you can think about becoming pro.

Thanks for reading and a big thanks to Robinsongz for the interview! If you’d like to see more from him, check out his Twitch channel.