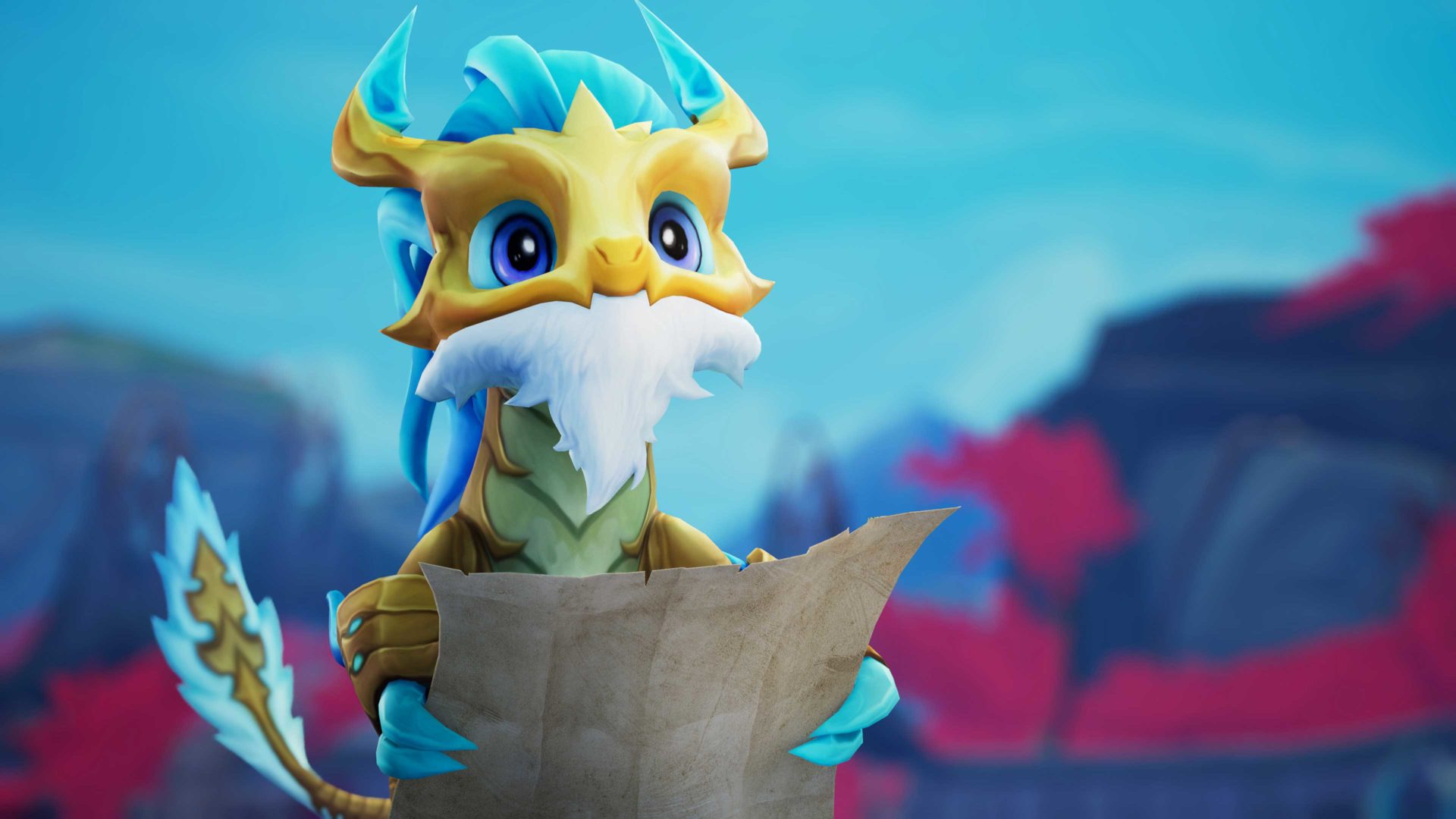 How to Build Your Own TFT Comps

TFT Build Guide: How to Create Your Own Comps

If you’ve been using tier lists or our website to look at team comps, you might have thought about trying to make your own team comps. Making a team comp is quite easy, but refining it to a point where it will actually be strong is the hard part.

In this article, I’ll be going over how to build your own team comp. While you may not always create the next big meta comp, it can be really fun to use your own creation to play in games.

We recently created a new feature called My Comps that allows you to create your own team comps and import them into your game using our TFT Overlay.

Be sure to check that out if you like creating your own comps!

Deciding on Units for your Build 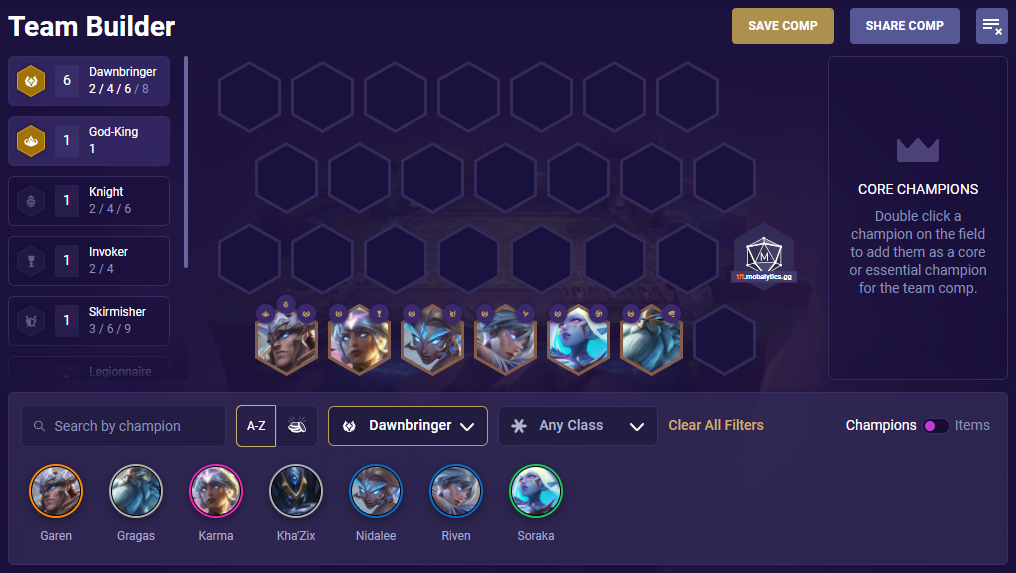 Let’s say I wanted to build an Dawnbringer team. To start things off, I want to go through and decide on which units I want to add into the comp. You can also make this decision by deciding on a carry unit you want to have. For this example, I’ll be making Karma the main carry.

After deciding on an initial core of units, you will want to fill out the team comp to fill out 8 units. In this scenario, I see that Ivern is a great unit that provides Renewer and Invoker for the team. Then, by adding Volibear as my 8th unit, I can get Brawler and Revenant.

There are other units I could have chosen, but this is just an example of how to synergize units together.

Deciding on Items for your Build

After deciding on your 8 unit team comp, you will want to decide on the core items for the comp.

This build focuses on Karma as the main carry, so I decide to put three items on her that I would consider ideal. After that, you can look at other items which will be strong on other carries like Garen or Volibear.

In general, we like picking anywhere from 3-6 core items as these are the items that you will try to build consistently. Any more and it would be too hard to build everything you want.

How to Position your Build

Moving along, the next thing you want to decide on is positioning. This will vary from comp to comp, but in my example, I want Volibear and Garen to be the two main units that are targeted first. They both have powerful abilities and can stall for a very long time, so I put them in front.

After that, I simply look to protect my main carry, Karma, by surrounding her with other units. I leave Gragas on the opposite corner to act as a bait unit for things like Assassins or targeted abilities.

Positioning is very situational. Comps rarely have a single position that will succeed every time, but the point of this step is to create a general idea of what you want to accomplish with your positioning. 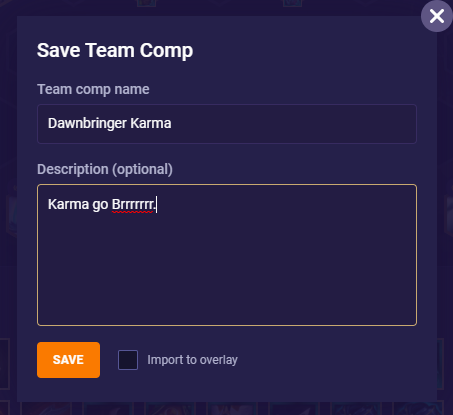 And with that, most of the work for your team comp is done. Experienced players can usually see a team comp and the items and fill in the rest of the blanks.

However, if you want to share this team comp with more casual or new players, you may want to provide some extra pieces of information. 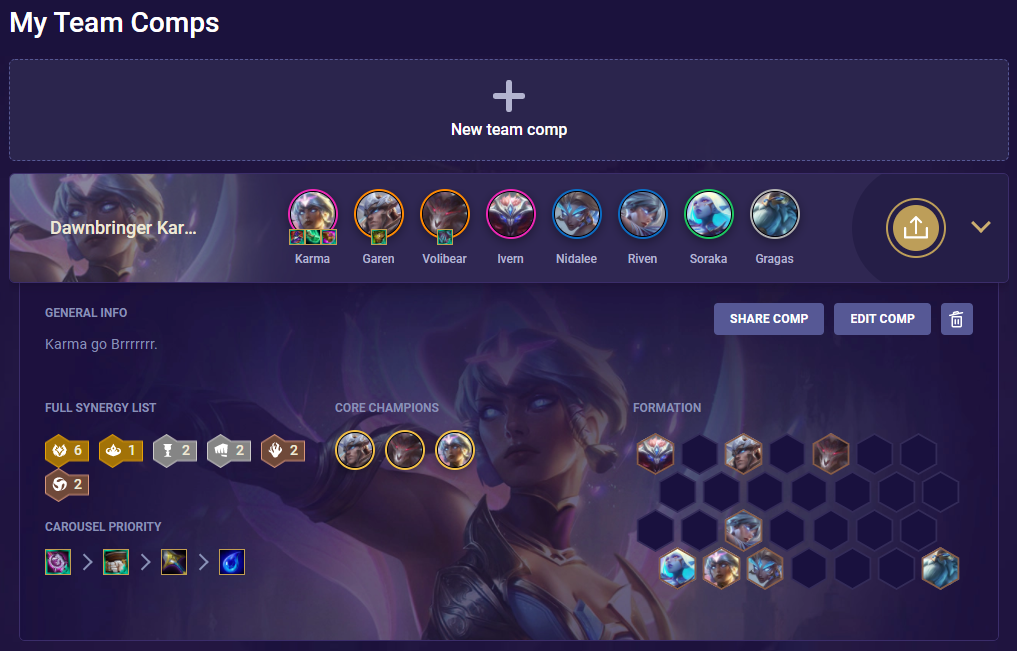 Here is an example of a complete team comp. You can choose to edit your text so that you can provide other tips and valuable information as well.

As we mentioned earlier, you can import any of the team comps that you created on our site directly to your game client using our TFT Overlay, as shown below:

There are many things that you could fit into this section of the guide. You can give additional tips on positioning, leveling, itemization, or just about anything you can come up with.

The possibilities are endless. These community made team comps will especially be interesting to look out for when new sets are released.

Find What Works For You

In this article, I gave an example of how a team comp can be built from start to finish. However, you don’t have to follow this exact order. Maybe you find out a good item combination on a certain champion.

In this case, you would want to build your team comp considering items first and then flushing out the units. My point is this. A new team comp inspiration can come from anywhere, so the order in which you build your team comp doesn’t matter. What matters is that you have all the pieces and necessary information for a team comp.

Last but not least, you should try and test your team comps before sharing it with the world. You may be a genius team comp builder and not need to do this, but for the most part, you will want to test out your team comp in game before you finish your build. You may figure out new ideal items for your team comp.

Or maybe, you find out that your team comp just doesn’t work. Whatever the case may be, testing is a vital part to theory crafting and building.

If you’re making comps for fun and just want to try them out, you don’t have to worry too much about testing. You can use this tool in just about any way that you want whether you’re a content creator or just a casual player who wants to share comps with friends.

This wraps up everything you need to know about team comp building and our new website feature. We’re very excited about the possibilities that our community can come up with. There are many more things coming your way so be on the lookout for those releases as well.