The new spoiler season should be just around the corner and unless you’ve been hiding under a particularly impressive specimen of sediment, you’ll have heard that Bandle City is our final region.

If you missed out on the reveal, the Bandlewood expansion was revealed in a recent Riot video.

I’m Jordan “WhatAmI” Abronson and today we leave behind the reasonable and logical worlds of strategy and deck building for rampant speculation on four fun Yordles we’d love to see show up.

Are all of these cards going to be balanced? Of course not.

These are thematic looks at how the awesome lore of these beloved League of Legends characters might fit into the Runeterra-verse.

I’ll try to keep my ridiculous theories somewhat in line with current game balance, but I make absolutely no promises of success in regards to that model.

Today we’re here to have fun. That said, please welcome our Yordles… 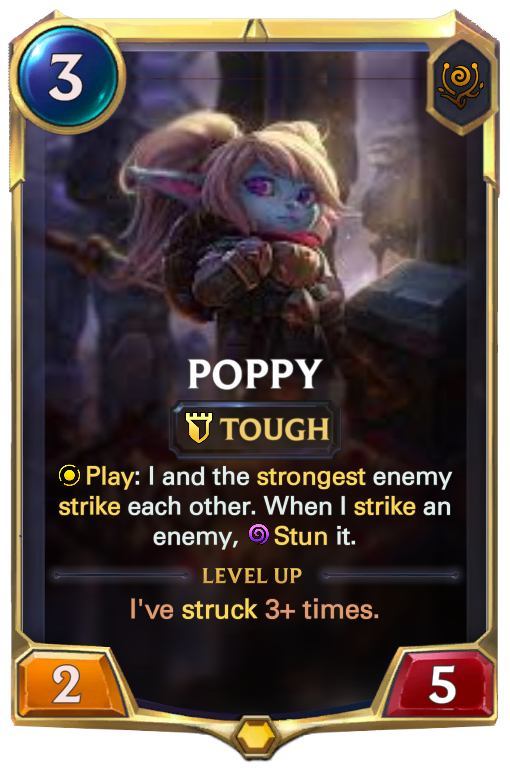 The first thing that most folks think when seeing this champion is “OhGodNotTheFace,” which is not particularly conducive to card design.

The second thought is, “That’s one tough Yordle,” and thankfully we’ve got that mechanic worked right into our core gameplay.

Hard to kill, way more powerful than her small stature would suggest, good at running people into walls, and almost suicidally brave, those are what come to mind when I think of this particular Yordle knight.

That, and a comically oversized hammer for bonking the villains with. 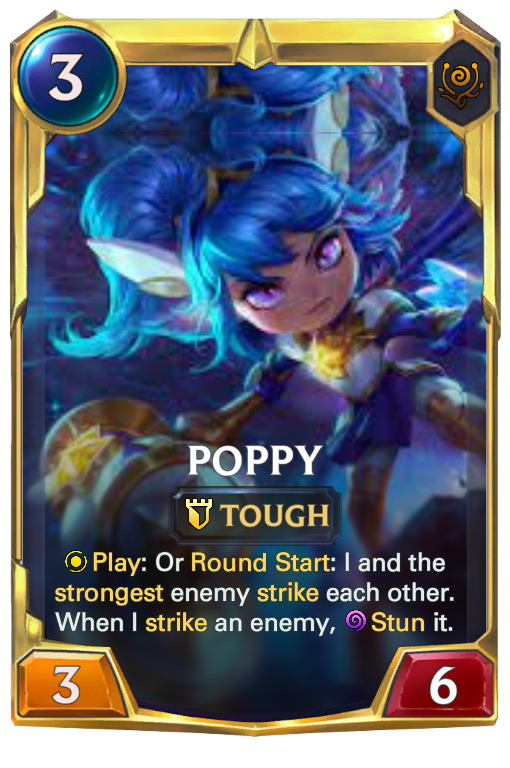 She’ll need some help to get it done, but with a bit of support to keep her alive Poppy can absolutely nuke opposing boards.

Unfortunately, she’s not good at knowing when she’s getting in over her head and will run up against whatever is thrown her way by the opponent whether it’s good for her or not. We’ve all had top lanes like that though, haven’t we? 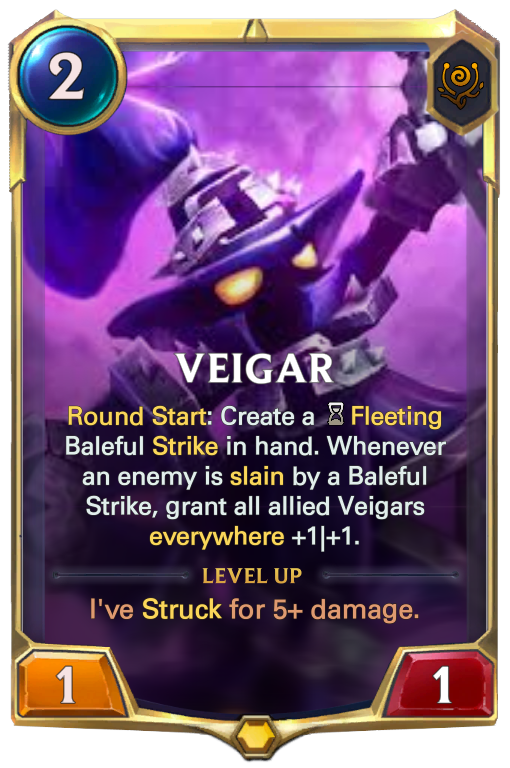 Ah yes, the old infinitely scaling ball of indomitable evil that is so absolutely focused on not being cute it’s almost hard to take seriously. Who’s an adorable dark avatar of carnage and slaughter? You are, yes you are.

Sure he starts as something tiny and easily squashable, but if you don’t step on him early then this little guy gets out of control quickly.

Leave him alone for too long and he’ll even bother to stop farming to rampage down the mid lane and destroy your poor defenseless nexus. 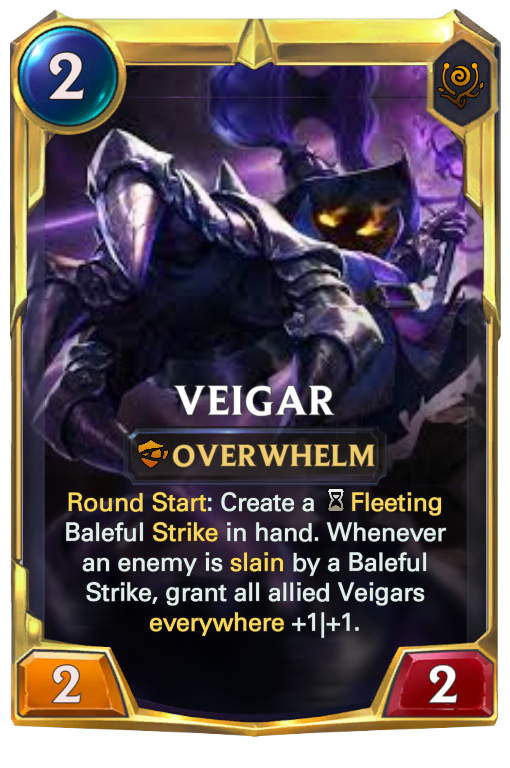 I wasn’t quite sure how to capture one of my favorite mages without bringing spells into it so I shrugged and decided, eh, rules are for chumps let’s run with it.

This little dude also has some very cool potential synergies with Kegs, Discard, and anyone that finds Spellshielded units in need of a good talking to. 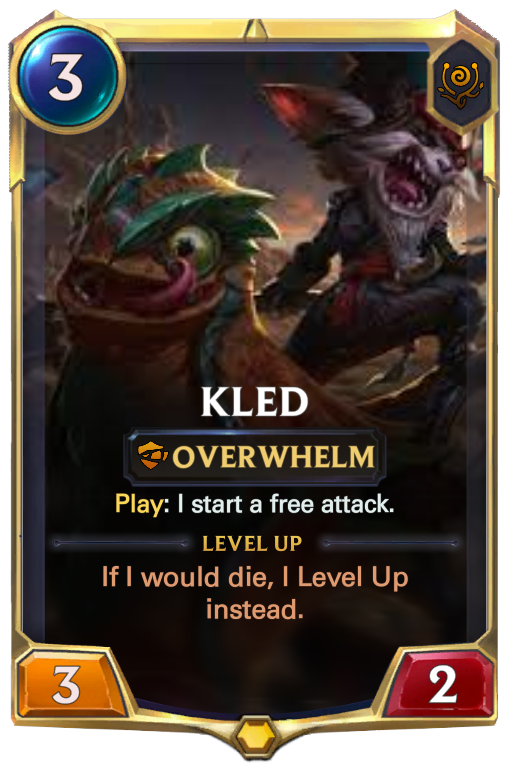 Chaaaaaarrrrrge! ….Yeah, no, that’s about all there is to say about this one. Have at ‘em Kled, let’s see what you’ve got.

Look, sometimes you just want to smash faces in. Sometimes you want to do that so much that you simply can’t get onto the field without running straight at the closest face available.

Also, we’d looked into some control or midrange strategies and it was time to give aggro some love. 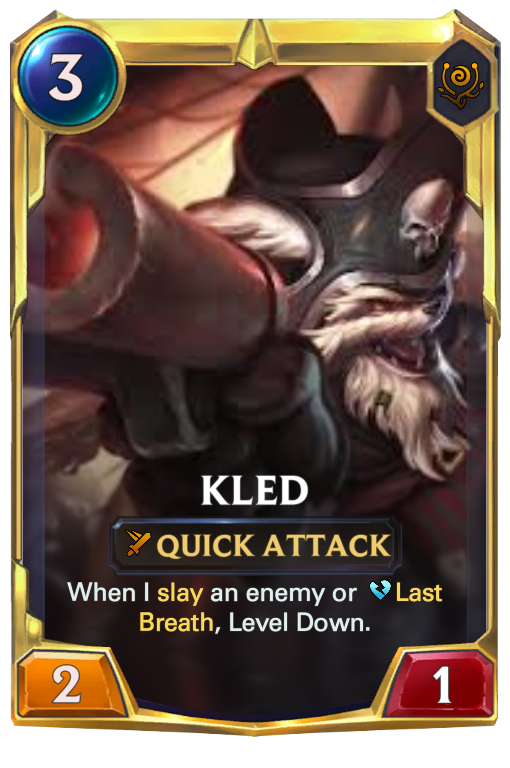 I’ll also admit to having some level of secret fascination with breaking the rules inherent in game design. When the Shuriman level three champions came out I was over the moon and was a bit disappointed when getting there was too hard to make the payoffs worth it.

This time instead we are going in the complete opposite direction with the idea of a negative Level Up combined with a Level Down mechanic.

And speaking of friends, who really need to break the game for their lore to shine… 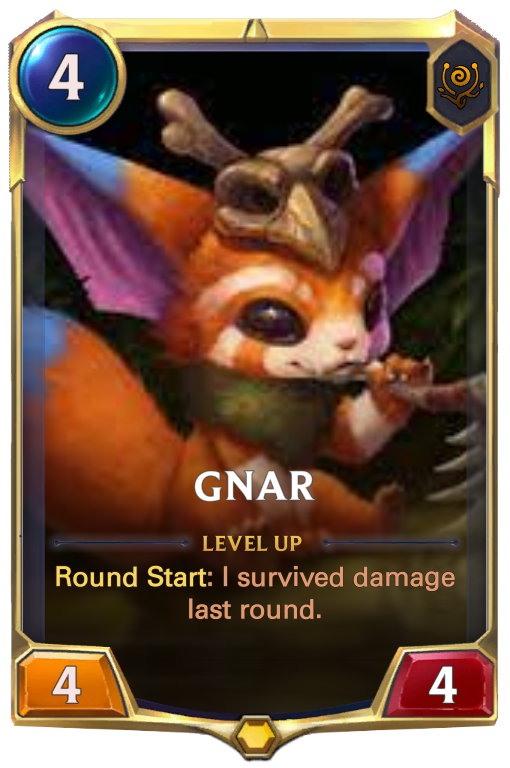 I’ve played around with a bunch of different templates for this cuddly mad hulkster and out of all of them I keep feeling like simple is best.

Could we write two walls of text about boomerangs and bouncing and different form swapping necessities? Sure, but it all starts to look kind of muddled.

For me, I’d love to see this friend showing up as just a solid-statted beater that will absolutely destroy the opponent if you poke him. 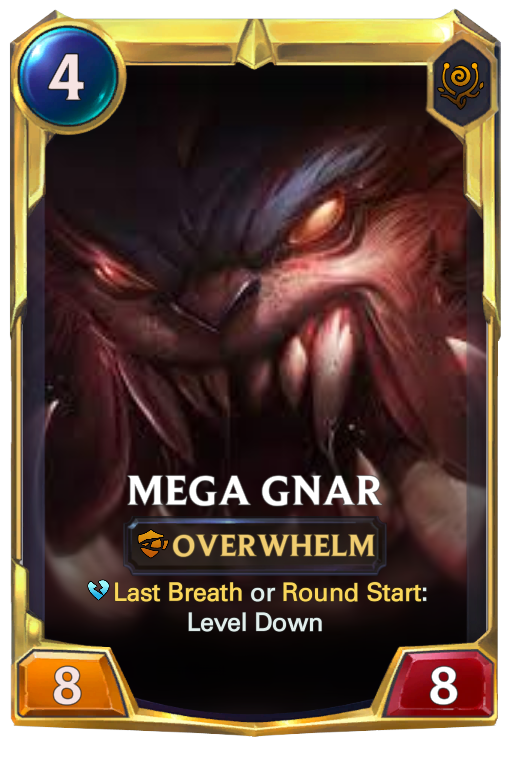 The cool thing here is that it doesn’t have to be the opponent doing the poking.

Ice Shard and Transfusion come to mind as cool ways to self-proc the Gnar Ultimate and swing in for massive damage as early as turn five.

Careful though, plans like that can go awry as he won’t get large unless he actually makes it through the turn. Keep a wary eye out for Flocks, Ravenous or otherwise.

At the end of the day, the likelihood of these folks actually showing up or looking anything like I envisioned them is slim to none with all the Yordles there are for Riot to choose from.

That said, Bandle City has got me hyped for all the cool new mechanics it could showcase and all the powerful, adorable friends and build arounds it’s got waiting.

I’ll catch you next time where, fingers crossed, I’ll be able to showcase some of those for you.