Thoughts On The Current State of LoR (Post Sentinels of Light)

The Current State of Legends of Runeterra

We’ve just had one of the busiest months in the history of Runeterra. While many newer games tend to hit their peak early, the LoR devs continue to deliver fresh ways to introduce new content.

Beyond our normal on-schedule expansion we saw a huge balance patch right after the Rise of the Underworlds launch.

Then out of nowhere, they surprised us by revealing a champion expansion in Sentinels of Light just days later!

This is unheard of for most games as major content releases tend to be more spread out. However, Riot’s open to experimenting and this time it’s really paid off.

I want to take a moment to appreciate the state we’re in. While the game has had its ups and downs, I believe we’re at the start of a new Runeterra.

During the times with problem metas and minimal patches, the devs sought out community feedback. They sent out surveys, did live Q&As, and most importantly used that information to better the game.

We expressed our strong desire for change, so they made it happen and then some! Who could’ve expected all the additional events and PvE content!?

There’s something for everyone, regardless of whether you play casually or competitively. Now that we’re here, I have complete faith that the devs will continue this path.

They’ve learned, and they’ve nailed it.

There was a ton of hype leading up to the release of Runeterra. While this is to be expected for any new Riot Games launch, Riot wanted to set a precedent with LoR.

They wanted to diminish the biggest issues of the average TCG/CCG; card accessibility and a diverse metagame.

Quite possibly the biggest issue with most card games is their huge cost barrier to entry. TCGs/CCGs have an ever-expanding card pool which can make it daunting for newer players.

Regardless of rotating formats that lessen the quantity, it still generally requires a great amount of time and/or money just to begin playing.

This is a big deal as it often leaves a player needing to buy-in from the start and even continue paying as time moves by and new content releases.

Riot wanted to end this. Keep the gameplay free and add awesome cosmetics to compensate.

Well over a year into Runeterra’s lifespan and they’ve stayed true to their belief. LoR’s monetization remains fantastic. They’ve continued to add new ways to earn cards and build your collection.

As new expansions are released, more prologue rewards are added to ensure new players have a smooth road to travel.

It’s even possible to earn more than enough shards and wildcards so that you’re fully set for the following expansion! And I’m not talking about a major grind either…this is natural progression just for playing the game!

Aside from some of the cosmetic prices, which are completely optional, we’ve got an amazing system in place. Long are the days where we have to play with what we have and invest wisely into a specific deck or two.

Enjoy experimenting with a full collection! There’s nothing quite like having the freedom to play anything and everything on Day One of a new patch.

The most difficult aspect to any competitive game is having a diverse and balanced metagame. Even the most successful games have their lows, because if there’s a way to break a patch, you gotta know the players will find it.

The devs can’t catch everything so mistakes will inevitably happen, and in Runeterra, they certainly have.

I won’t sugarcoat it. Prior to our recent balance patches, Runeterra was in a poor competitive state. Azir Irelia and Thresh Nasus, while great decks in their own right, well overstayed their welcome in the meta.

Trundle Lissandra also caused a long reign of despair with The Watcher, and would’ve only been worse had the others not kept it in check. We’ve had other “two deck metas” in the past with the likes of Fizz TF or Aphelios TF, but nothing quite broke us like Azir Irelia.

But you know what? That situation led us to where we are now; an extremely promising future for Runeterra.

As I mentioned before, the devs heard us loud and clear. We used to have frequent balance changes up until a certain point where things teetered off.

However, we’re now back on that path as always intended.

We just recently got the announcement confirming the final region in Runeterra; Bandle City! This rounds out the game as the tenth region and will add a ton of deck building possibilities. Every major content release has brought us a new region.

See what’s in store for the rest of 2021. Discover the final region joining Legends of Runeterra, explore a leveled-up Lab of Legends, and mark your calendars for a bonus PvE expansion in the fall. pic.twitter.com/aLrd28YyB9

Rising Tides brought us Bilgewater and a huge immediate card pool, while Targon and Shurima had more staggered appearances. Notably, each new region started with a smaller card pool compared to the established six that have been available since Beta.

Once Bandle City becomes established on its own, we will finally have a more widely balanced card pool in terms of card quantity per region.

Every expansion thus far has had the primary focus towards the new region, then a small subset of support cards for existing regions. Since this is the last new region, we’re likely to see more diverse expansions moving forward.

This is incredibly exciting for the game! Future card releases won’t be as restricted, so when a new set launches, we’ll likely get more toys all around! 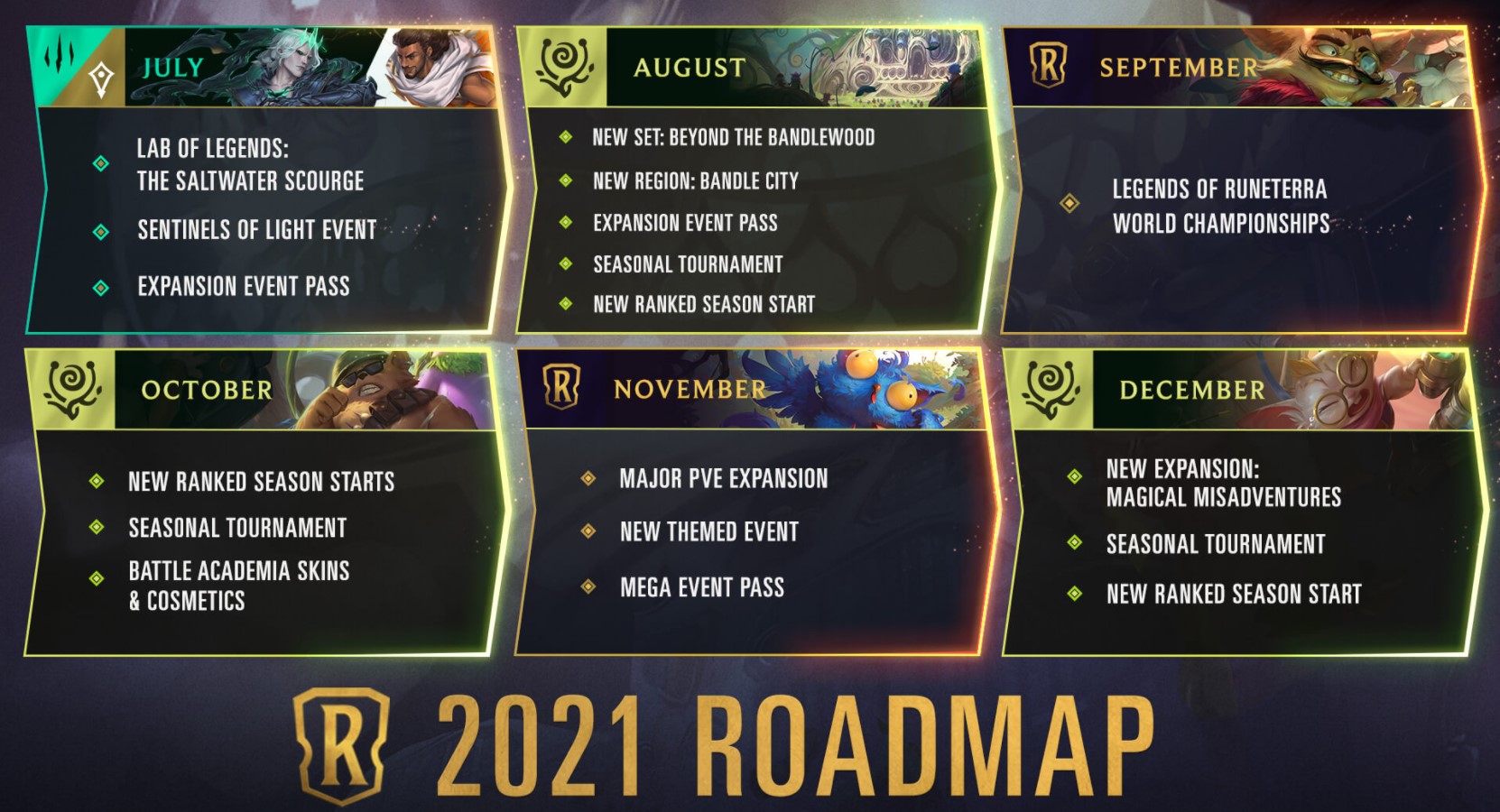 Beginning in December last year we were introduced to Riot official Seasonal Tournaments. They are currently set to occur every couple of months. There have been four thus far, each bringing the opportunity for players to compete at the top level.

Built around each two month ranked season, Seasonal Tournaments add extra hype and incentive to play right till the end. Whether you qualify through ladder or the Last Chance Gauntlet, there’s always a chance for everyone.

With the Gauntlet system, the grind time becomes less of a factor, so it’s okay if you can’t play for several hours each day. While it certainly takes time to practice and improve, having the option to qualify outside of top ladder finishes is extremely welcomed.

For those that do have time, grinding through Masters early can also save a great deal of time in the closing weeks.

It’s very possible to secure enough points at the beginning, avoid playing ranked any further, then still make the top 700 cut. Although if you want the highest seed to qualify Day One at 7-2, you’ll have to keep pushing!

This September we have the first ever Legends of Runeterra World Championship. This event will gather the top 64 players from amongst Seasonal Tournament winners, highest point performers, and top ranked finishers.

The World Championship has a $200,000 prize pool and is the biggest event to date. We don’t know all the details just yet, but this is a huge milestone for Runeterra and I can’t wait to see it!

If you’re serious about qualifying for Worlds, worry not, there’s still a chance! Our fifth Seasonal Tournament is coming up this August.

So if you haven’t prepared you better get started soon. Good luck!

If there’s a card that sums up my feeling towards the current state of Runeterra, it’s this.

I truly believe we’re at the best state we’ve ever been. We’ve had great periods in the past for sure, but this time we’re moving right on track. The devs are on our side and have proven their support and understanding. It’s all finally clicked. Now we sit back and enjoy the experience! At least until we can complain again.

PS: Please revert Rummage to one mana, thanks!

Time eludes us the moment we don’t take action.

Make the choice to use it before you drift off in distractions.

Thanks for reading. If you enjoyed this article, check out some of my recent guides here!