We’ve heard his footsteps, we’ve foretold his coming, but today the master of the Ruination walks amongst us.

Here are the new SI LoR cards from The Ruination: 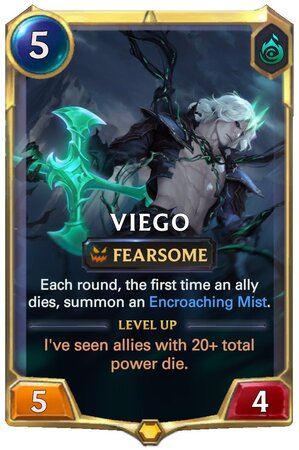 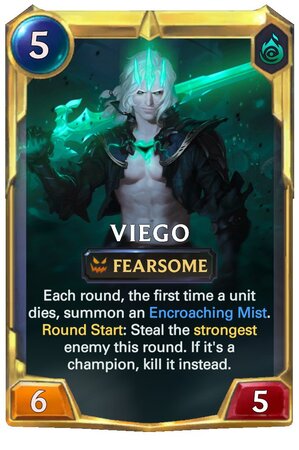 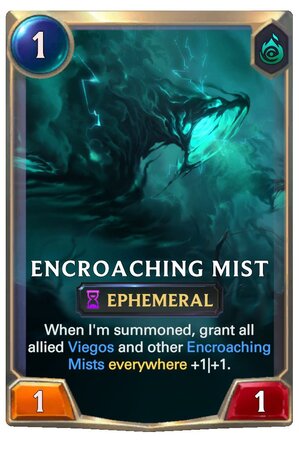 On one hand, both forms of this champion look pretty busted. His stat line makes him reasonably difficult to remove, and every turn he’s in play with a deck built around him he will grow while making bigger and bigger Ephemeral problems.

This will pile on the pressure when you have the attack token and almost mandate open attacks before the board clogs itself when your opponent does.

Since the mists will count towards his level-up condition he’ll hit level two relatively fast as well and that’s when the fun starts.

Viego’s level two is the full-lock type of champion that Kindred always wished she could be. Play a large unit? Mine now.

Play a Champion? Kill it. Play a bigger thing? You can have your old one back, I’ll take it.

On the other hand, though, we’ve seen how slow Kindred is to win games coming down on turn five.

With how committal Viego and his gameplan are, having a savvy opponent go wide around or elusive under is going to be a serious problem.

This is looking to be an extremely cool new tool for control players as well as an interesting possible finisher.

However, he’s going to need some serious testing to see if he gets relegated to the “Too Slow” pile like Kindred did. 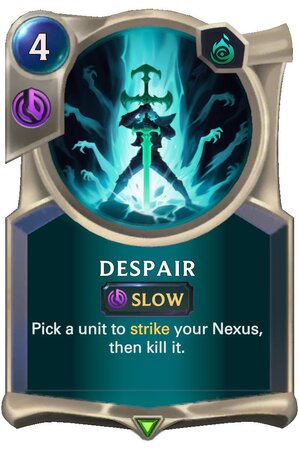 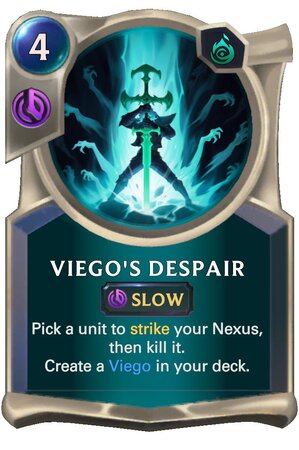 Before you go riding off on the “Oh god it’s a four-mana Vengeance,” train, let me pull you up short for a moment. Vengeance is fast, which is a huge deal. You can tap out on your turn and then use Vengeance for a large open attack.

Decks that play Vengeance generally care a good deal about their life total. While this will look cool killing a Shen, it’s much less impressive when you try to use it on Cithria the Bold.

She will slap the ever-loving nonsense out of you before she goes down and you will feel it.

What this is though is a powerful midrange tool for decks that want to be on the aggressive side of things and push through problem units such as Thresh or Radiant Guardian.

The less you’ve had to suck up early damage from your opponent the better this card gets, so tempo-midrange SI just got a new friend. 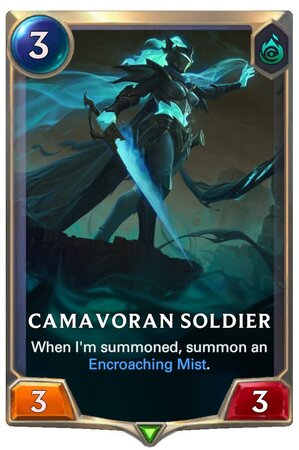 While there’s some cool synergy here with Viego this card feels like the unholy love child of Arachnoid Sentry and Dunekeeper.

I’m not sure it does either job quite as well, so it will be interesting if the well-statted 3|3 body for the cost can make up for the active deficiency. 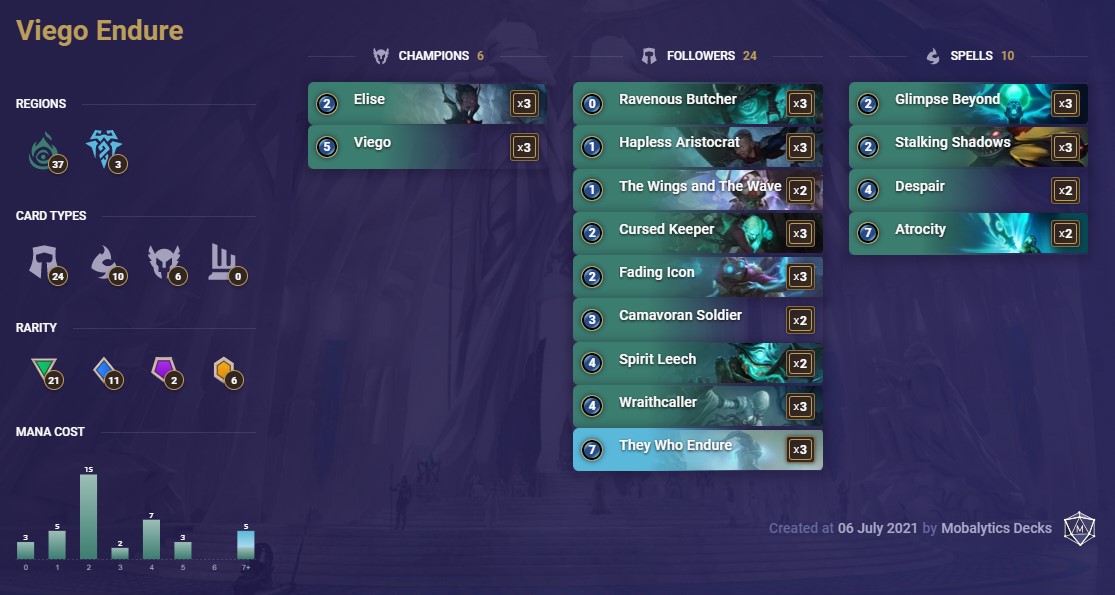 What better place for Viego than the deck that loves to watch everything die already? Nothing but synergy, card draw, and tempo as far as the eye can see. This deck is committed to clogging the board it doesn’t even bother with Mistwraith alongside Wraithcaller.

All you need to do is keep the game going and your Viego or your Endure will grow out of control, either destroying the opponent completely on their own or setting up for a well-timed Atrocity.

And the best part is that if you can’t get through that finishing blow, then leveled Viego will simply take whatever your opponent’s win condition is and use that to kill them. Seems like a pretty fun time to me.

We’re revealing new The Ruination cards every day at our spoiler page. To build decks with the new cards, head to our Deck Builder.