We’re back with the fourth episode of Swim’s Deck Doctor series. In this episode, Kuvira joins to select and improve a submitted deck. In this article, I (dpmlicious), highlight the deck-building skills they use in the video and summarize their points.

You can submit one of your decks for the next episode by leaving your deck code or Mobalytics deck link as a comment to his video:

This series goes beyond fixing a deck, but helping people improve their overall deck-building skills to apply to other decks. This week, we look at:

We changed it up this week so please let us know which method you preferred compared to Episode 3. For this episode of the Deck Doctor, Swim used the following steps:

We’re looking at a Dawnspeakers Idols deck, a Demacia-Bilgewater deck with Lucian and Miss Fortune, submitted by @mitr_x from Twitter.

It is an old concept that uses Monkey Idol to activate death triggers (Lucian, Redeemer, Radiant, and Dawnspeakers).

This is the originally submitted deck: 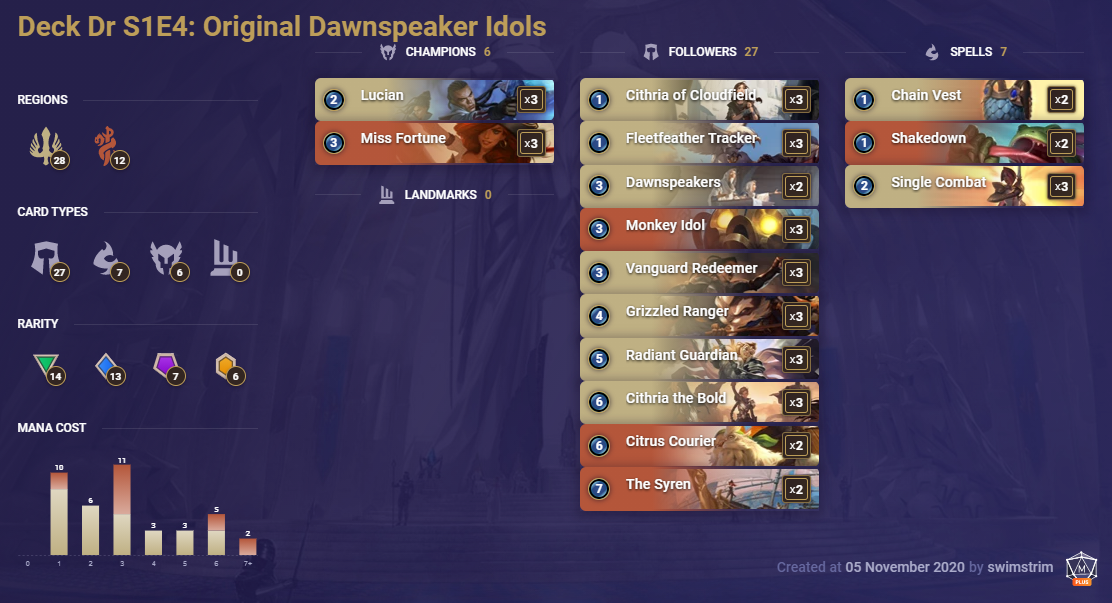 Swim and Kuvira were interested in the potential of Shakedown in helping control the board and potentially triggering some kills to accelerate combos.

They had initial ideas to remove Syren for being too slow for the deck. They felt they might need to remove Lucian in favor of Quinn, as they thought it might be better and they weren’t sure if they could make space for Senna, which is a good combo to go with Lucian. 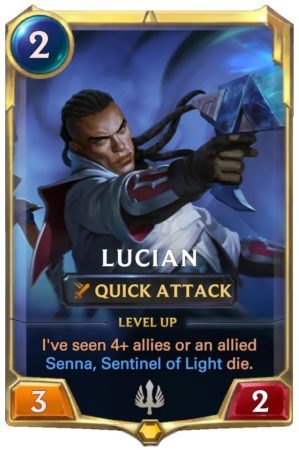 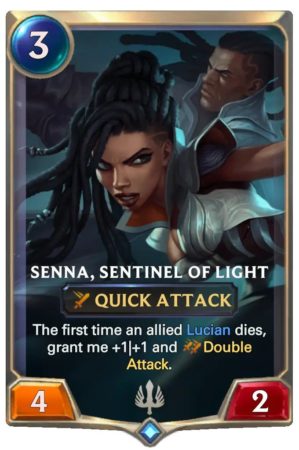 This was a particular concern, as Senna is a 3-cost card and the original deck had many 3-cost cards. They weren’t a huge fan of Citrus Courier because it didn’t fit with the deck objectives and there were too many power 6-cost cards.

Here is the original deck.

Yellow box = Cards that were removed 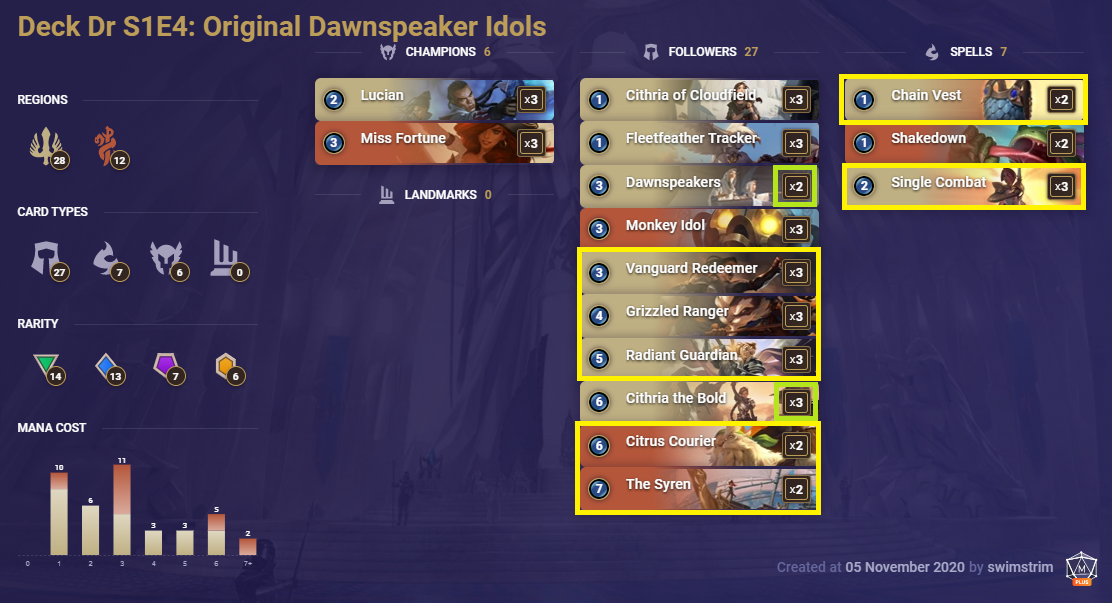 This is the improved version.

Yellow box = Cards that were added 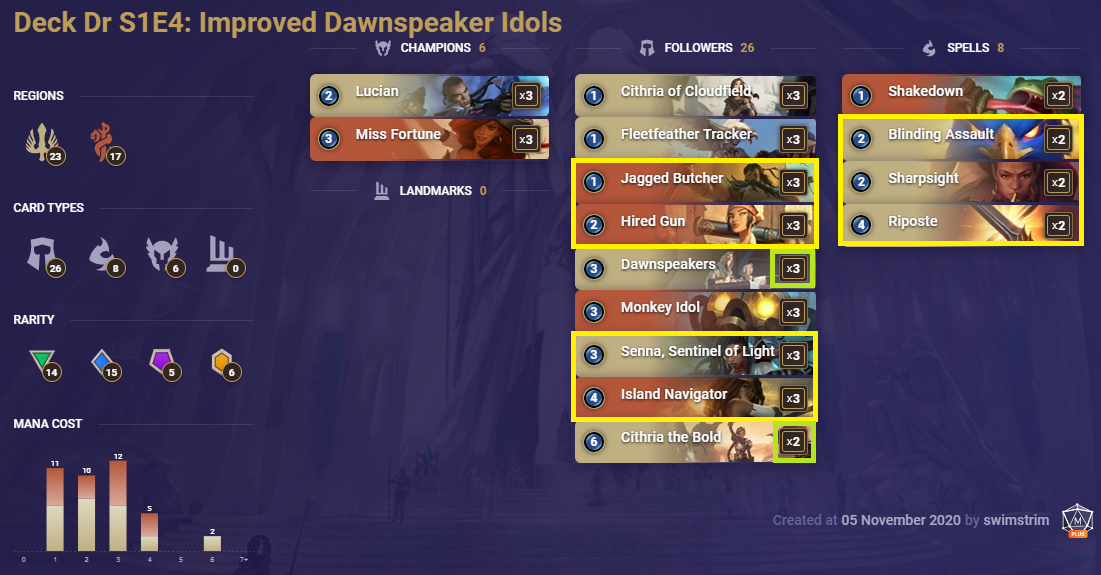 The Dawnspeakers Idols deck is about going wide (having more units on your board) and putting pressure on the board earlier in the game. 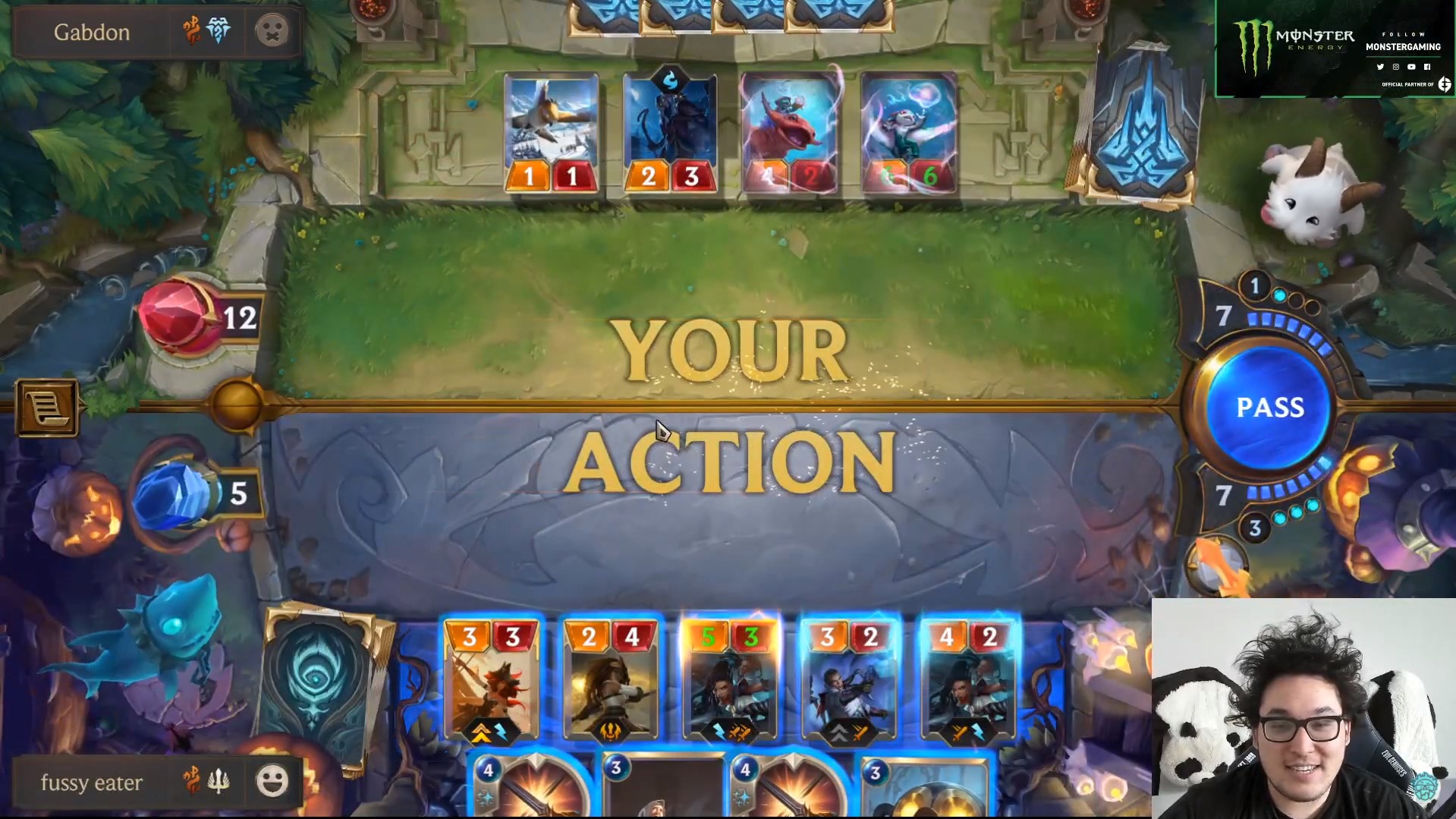 It also needs some units that can die easily for the combo. It is a mid-range deck that is flexible, which allows you to survive vs aggro or plays to rush vs control decks.

Like other decks, it is important for this deck to be viable even if the Dawnspeakers-Idol combo is not achieved.

To achieve the goal of the deck, the following cards were removed:

The following units were added:

2. Number of copies to include

Consider how important the cards are to your deck and whether you want a higher chance to get that card.

Since the deck is a Dawnspeakers deck and the point is to go wide and buff that board with the Dawnspeakers, they increased the number of copies from two to three. 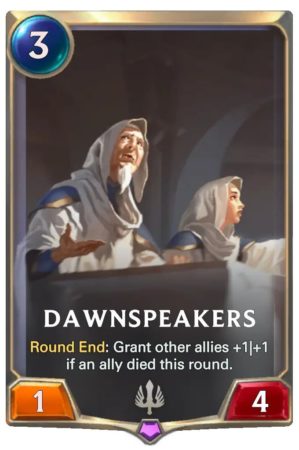 Cithria is nice to have when you need it, but can be clunky in the early game and feels bad if you have two but can’t play either yet.

Feel free to have one or two copies of a card, instead of three. You do not need to stick to multiples of three.

The original deck had many expensive cards that did not fit its style, which was to go wide with many cheap units. Then, buff those units up with Dawnspeakers.

It had ten cards that cost 5+ mana. The improved version reduced that to two and increased the flexibility by having cheaper cards.

Cheaper cards allow us to adapt to the situation by having a range of combinations to play or react during the game.

After the changes and testing out the deck, Swim and Kuvira rate the new deck as a lower tier 2 or a high tier 3 deck. They might consider reducing the number of Shakedowns to two.

The takeaway deck-building tips are:

Be sure to revisit the accompanying YouTube video, where Swim and Kuvira go through the entire thought process and play three games with the deck.

I was competing against top CCG gamers and placing well in global tournaments for Artifact and Dota Underlords, until I left those scenes. I hit Legends of Runeterra Masters by running an experiment of playing decks without learning anything about the game. Come join my productivity streams Mon - Sat 11AM PDT at twitch.tv/dpmlicious. You, I and others sit around doing our own work/studies for 45 min, and chill for 15.