Riot recently released a new Lab of Legends in which you can battle as Miss Fortune, Tahm Kench, or Twisted Fate.

Each champion has a unique deck they start with, but you will have plenty of options to add new cards and unique powers to your deck as well. Before diving in, a run in this game mode typically takes 40-80 minutes.

However, you can save at any point on your journey. It is also important to note that unlike Lab of Legends if you fail a battle, you die and can try again.

In this guide, we will cover the map, tokens on the map, leveling up, rewards, run-scoring, and other helpful tips and tricks so you can defeat Gangplank!

Let’s start with the map which will spawn at the start of your run. Each map is unique where your encounters with battles and creatures of Bilgewater will be different on each map! 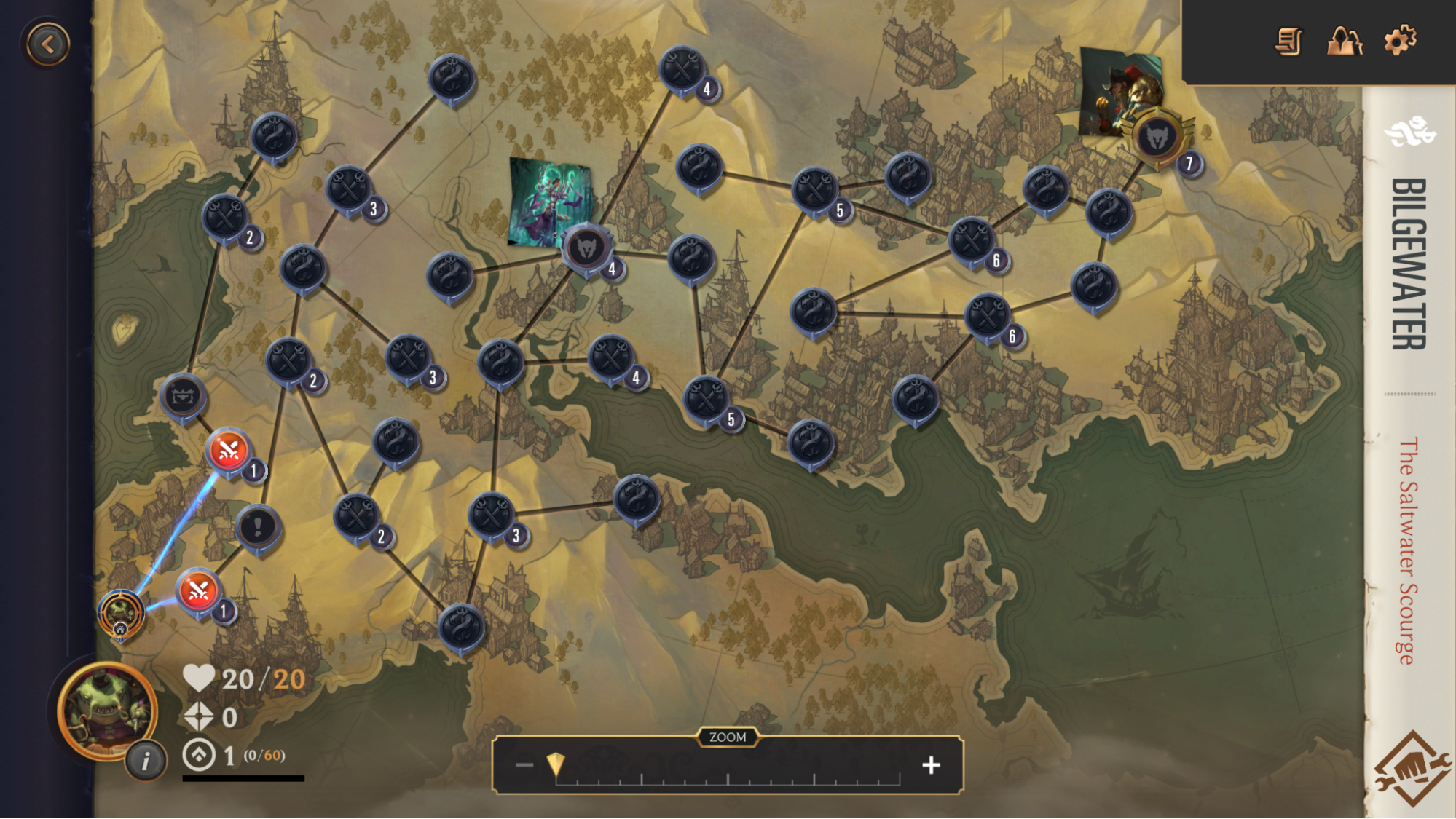 Every map features a variety of tokens lined in a path. Every map has an end game boss of Gangplank which takes a minimum of 6 battles to get to the 7th battle which is Gangplank. If you take a minimum combat route, then the 4th battle is always a mini-boss.

There are three mini-bosses of Azir, Karma, or Swain. These bosses are determined as soon as you start your run, so it can restart the run if you prefer one mini-boss over the other.

You can choose any path that you would like and remember that you are also allowed to backtrack and come back to previous untaken paths that you want to explore.

Gangplank is a very strong boss, so if you are not winning your previous combats with ease, it might be good to go to easier battles to get extra cards, powers, and gold for the store.

Let’s talk about the tokens on the board. There are a variety of tokens all with different meanings. The ones with the numbers next to them are Battle Tokens. As the numbers progress, so does the toughness of the battle you face. 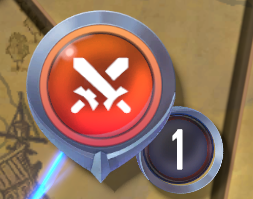 These tokens mean that you will do battle with the AI and upon winning you will be given a choice of a card to add to your deck.

A bonus tip is that if all the options for a new card are bad, take the lowest cost one so that you avoid having a completely dead card. A weaker 3 cost card is better than having a 10 cost card that you will never play.You will also be given gold and experience based on the level of your opponent.

It is important to note that unlike Lab of Legends, in the Saltwater Scourge if you lose a battle your run isn’t over! You can try it again, but your run will be marked with a death.

If you are having trouble for a rank 5 opponent and haven’t cleared a previous rank 2 or 3 opponent, then it is a good idea to return to an easier opponent or shop to build a better deck before trying against the rank 5 opponent. 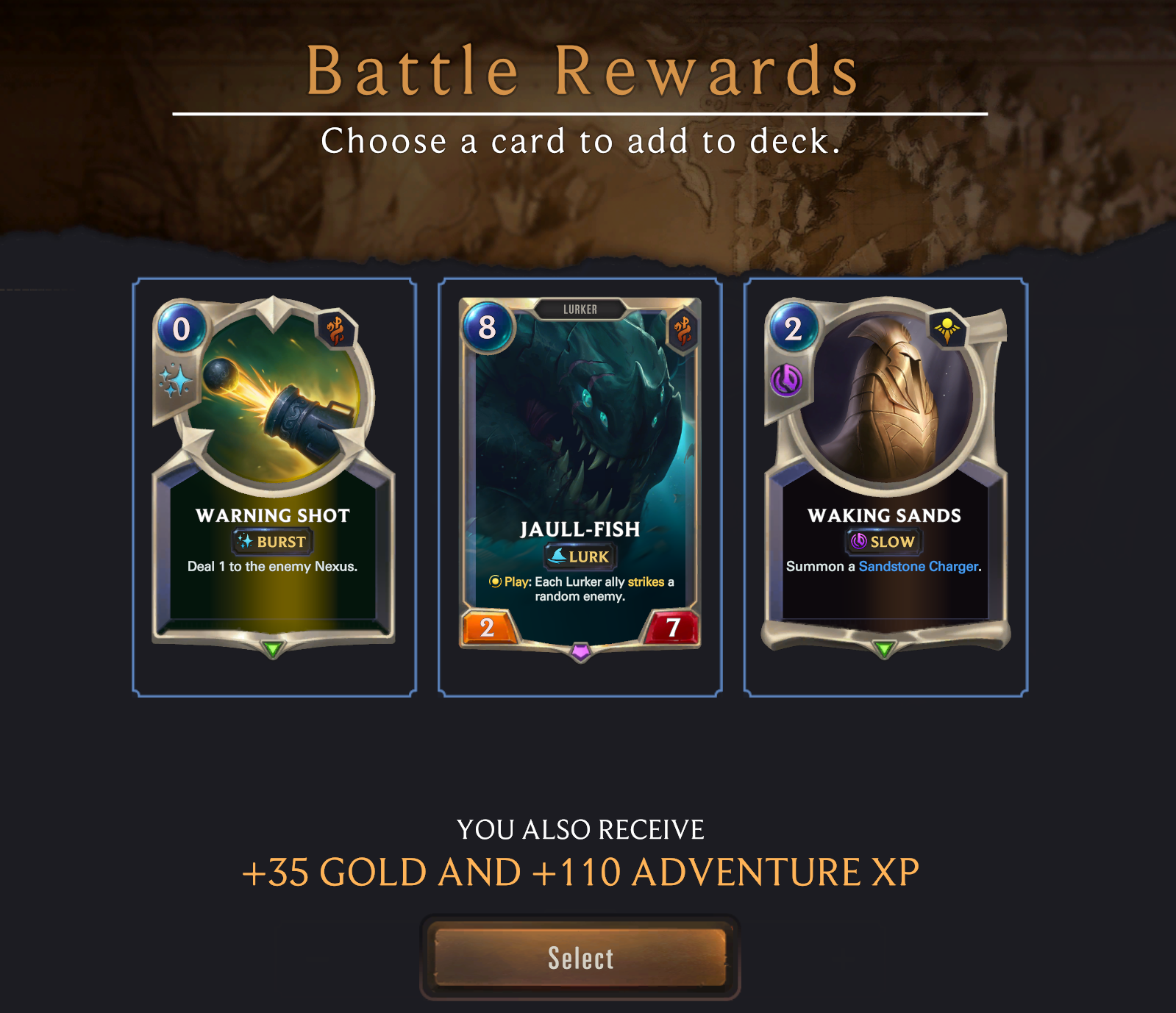 Exclamation points on the map are what I call event tokens. On your adventure, you might run into Coral Creatures, Smooth Soloist, Boxtopus among other creatures that lurk in Bilgewater. 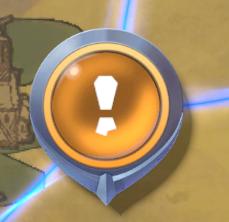 Each one has a unique offering. You also have the ability to bypass these points if you don’t want to take the risk. However, most of the points allow you to leave if you don’t like their offerings. 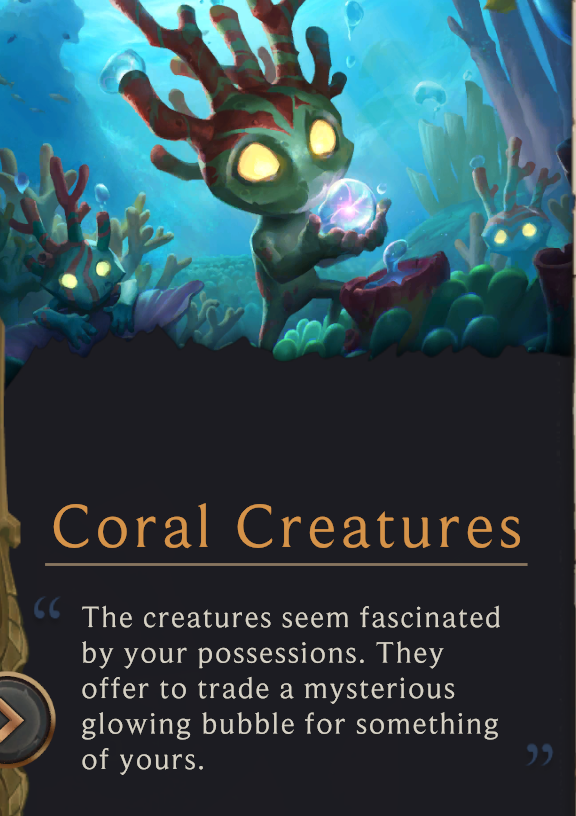 You can also always go back if you can’t afford what they are offering as well! 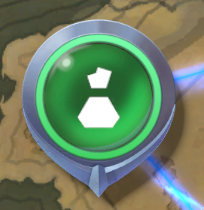 These cards cost gold that you have earned throughout your adventure. It is important to note that the merchant sells up to 3 copies of each card and that you must buy each one individually. 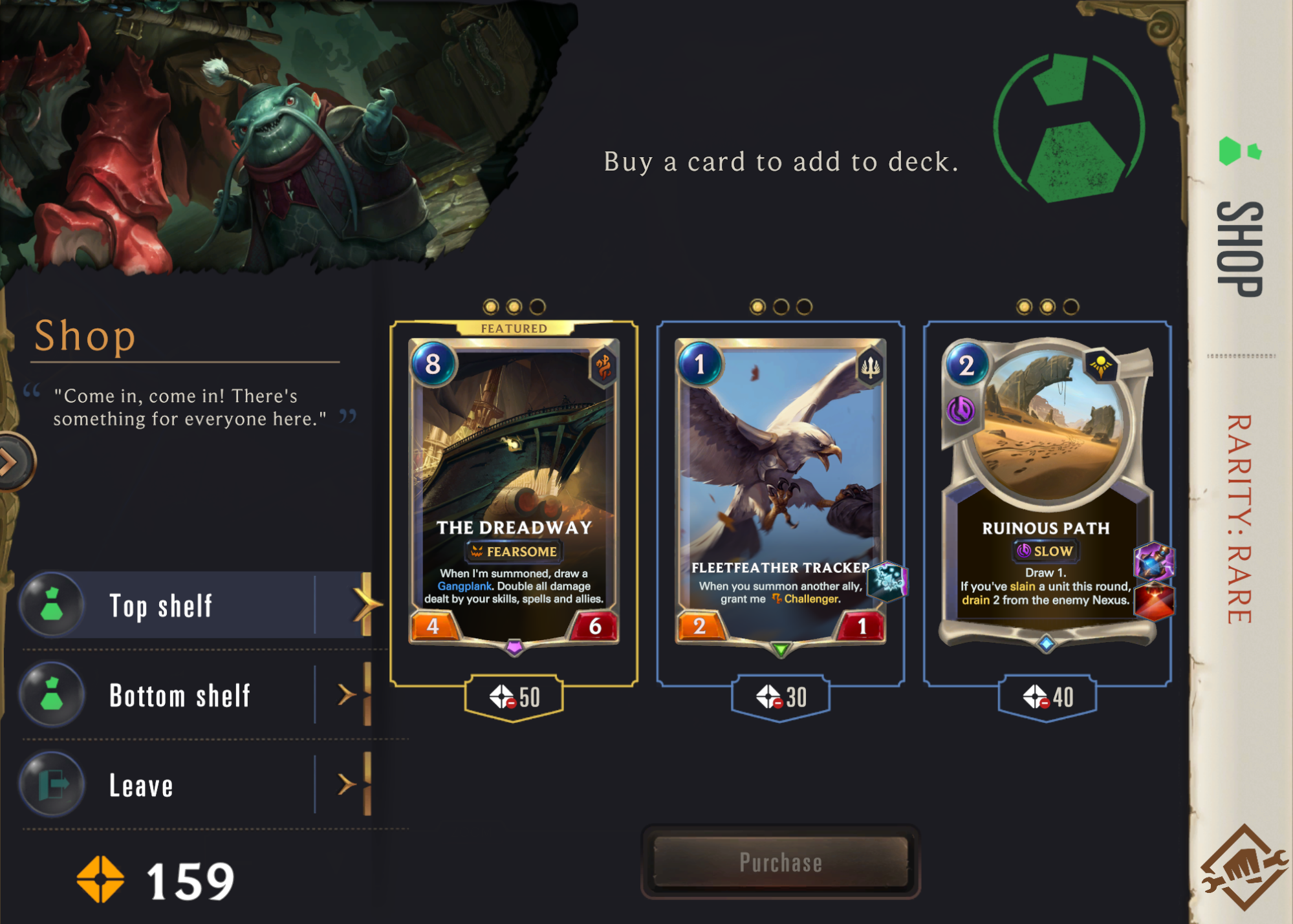 It is also important to note that the cost of each card will go up or down after you buy it. The expensive cards tend to be at or below half after you purchase them.

The Healer Token features Fortune Croaker who offers you two things. You can either heal or cut a card. 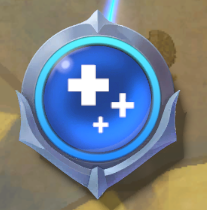 I recommend saving at least one Healer token before facing the final boss of Gangplank, so be sure to keep track of how many Healer token options you have before making a decision.

If you have cards that are underperforming or ruining your synergy, I would recommend cutting them as you will save more health in the long run with a stronger deck. 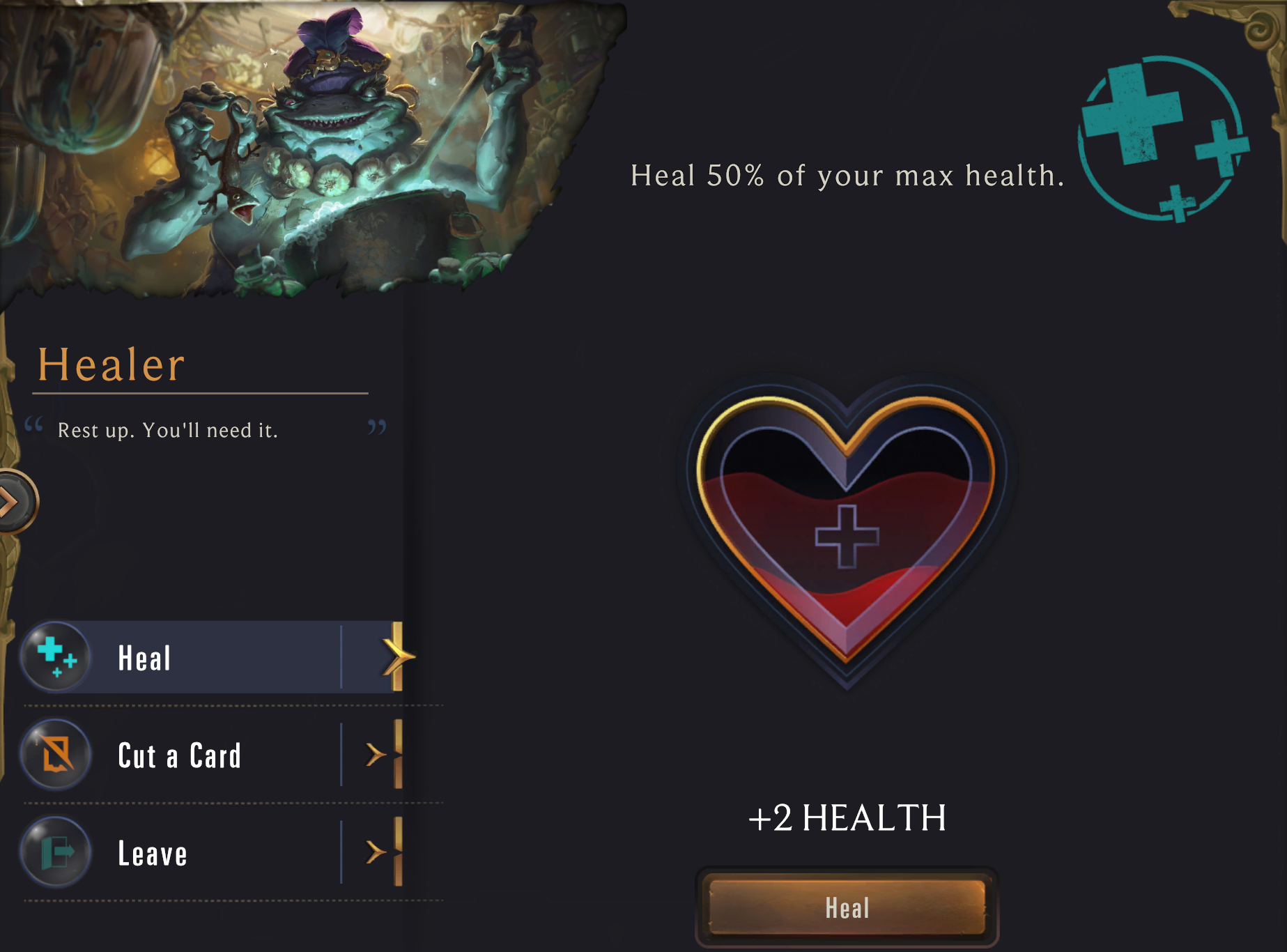 However, if you are needing to heal more than 7 health, I would pretty much always take the healing option and perhaps look to cut cards somewhere else if you feel the necessity. 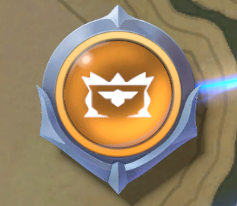 However, if you won’t like any of the upgrades, then you may skip the chest. Please keep in mind that you can only take one treasure from this chest, so choose wisely!

There are 8 levels that you can achieve. Each level gives you 2 additional maximum health points among other things such as additional cards, passive powers, items for champions or units as well as other upgrades for your deck!

The first levels will come quickly as the amount of XP needed for them is very low and will generally be filled up after one battle. You will quickly get your first passive power as well as an additional champion and followers to help you along the way.

When choosing your side champion think about what champions already go with your current champion.

For example, Miss Fortune and Quinn or Soraka and Tahm Kench. Champions that already have solid synergy with each other. With that said, I would also avoid champions who require a lot of synergy such as Pyke who heavily relies on Lurk to be effective. If you don’t have the chance to get a high synergy champion, then high power level champions such as Sivir are a good substitute.

If you are having trouble defeating Gangplank, I recommend reaching the maximum level to better defeating him through more health and stronger cards.

To get to the maximum level, you will need to complete all the battle tokens on the map. Level eight will give you your fourth passive power!

I will also let you in on a little secret that you can get 5 passive powers if you happen to run into Smooth Soloist who will offer you an additional passive power!

After defeating Gangplank, you will receive a rank for three different traits including Skill, Speed, and Wealth. It is unknown exactly the parameters required for each rank, but if I had to guess for Speed under 40 minutes is an S as I had a 33-minute run that resulted in an S.

Both of these were after 100% runs. This leads me to believe that you need to do a full run to get an S on Wealth as well as a little bit of luck.

As for Skill, at 0 deaths I have gotten A repeatedly. At one death I got a B. I am unsure of what is needed to get an S for skill. I had a 33 minute S for Speed and 0 death run, so I do not believe Speed is a factor for the Skill score. In that same run, I had a final health score of 10/30, so there is a possibility that final health as well as number of deaths is part of the Skill score. 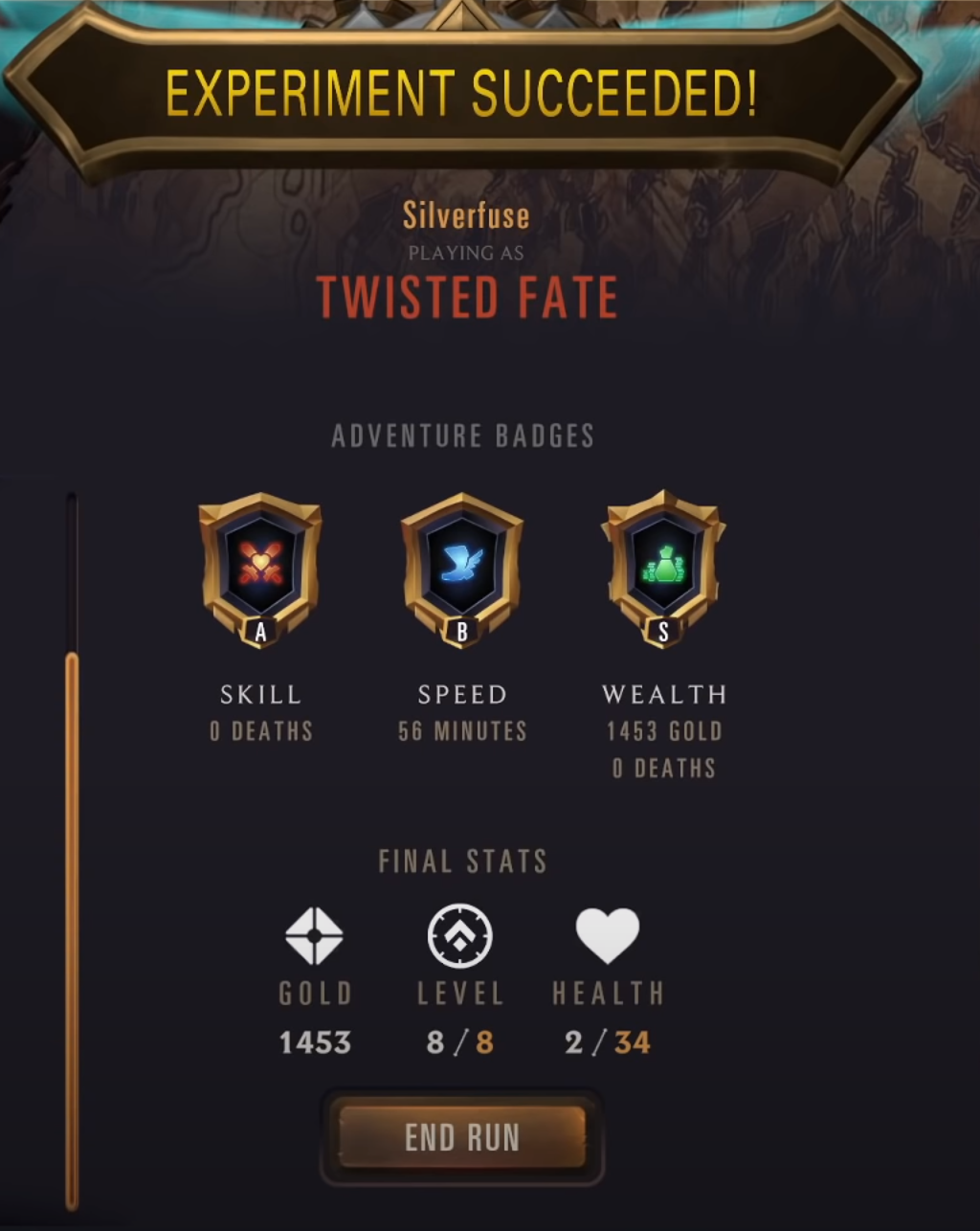 This new lab from Riot has been a great addition to Legends of Runeterra. As Riot strives to make permanent PVE additions to the game, these are highly welcomed as they allow for an expansion of Runeterra’s lore and allows players to play as their favorite champions.

I hope you enjoyed this basic deck guide for Saltwater Scourge. If you’d like to see my 100% full playthrough 0f Death of Twisted Fate, you can find it here: