New to Legends of Runeterra and looking to dive deeper into the world of Arcane? This is the game mode for you!

It starts with new players in mind with intentions to introduce you to the game while building up the challenge aspect over time.

This article will go through what to expect in the game mode and things you should think about while making choices.

There are several champion stories to choose from, but in this one, I will be focusing on Jinx.

For more advanced advice that applies to all champion runs, check out our 10 Path of Champions tips.

When you first enter the Path of Champions, you will start with Jinx as your champion and play a tutorial round with her. You will see a map where you start with the in the undercity Zaun.

The maps have tokens on them which can be battles, shops, treasure chests, events, and a variety of other things. 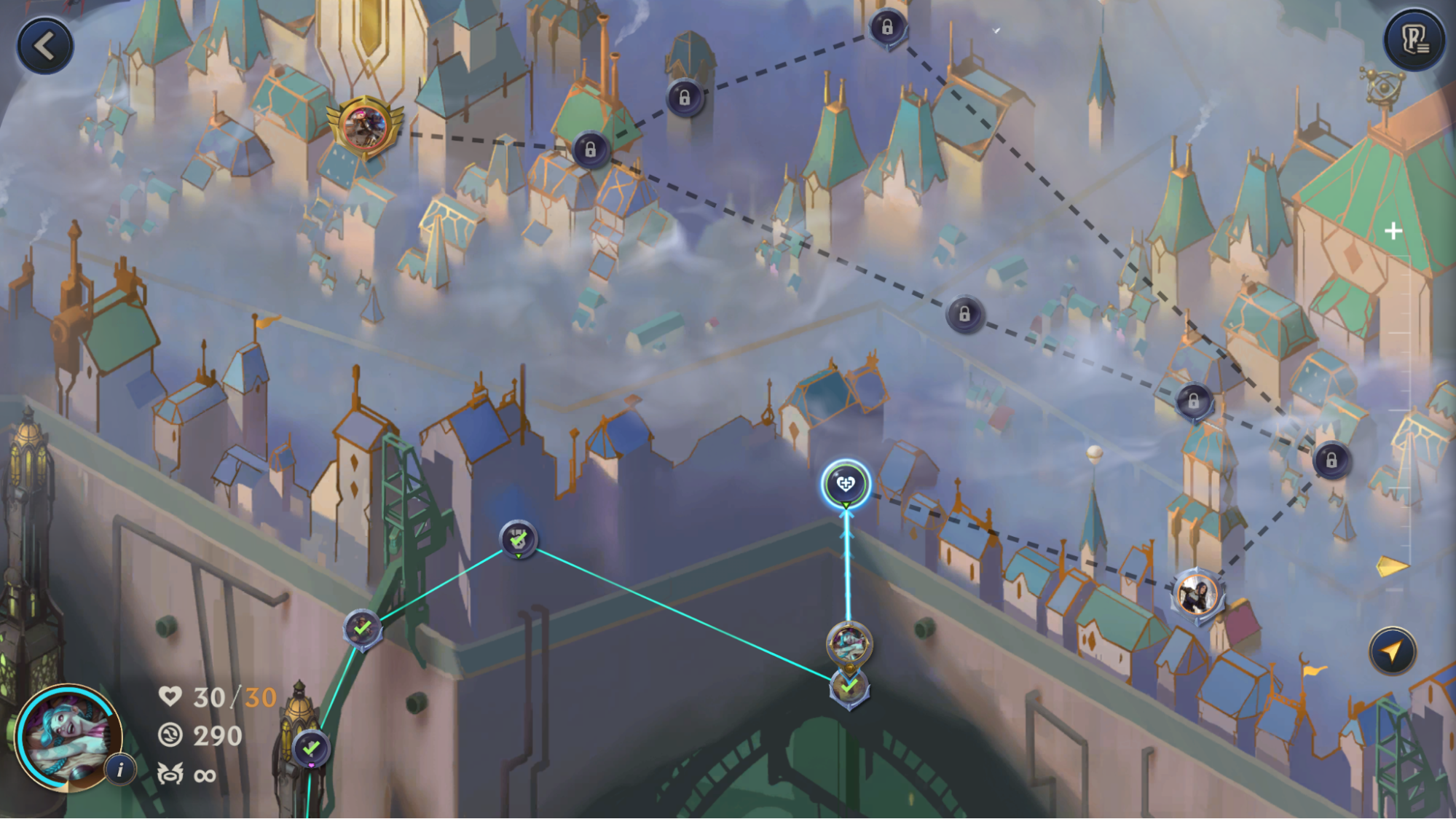 On the bottom left you can see your champion and their reputation rank (which we will get to later). The 30|30 is the health that will carry over after each match.

For example, if you lose 2 health in a battle, you will start the next battle with 28|30 health. The same goes for if you heal during a match.

The second row, 290, is for your gold accumulation. You obtain gold through winning battles, finding treasure, and sometimes through events! You can use your gold to buy new, powerful cards at shops.

The bottom sign is for resurrections. In the tutorial and the game mode, you can die an unlimited number of times and start where you left off. It will just affect your final rank badges which have no impact on your progression. The rankings will be discussed later in this article!

After leaving home, you will play against Klaxon Lawbot which starts at 10 health. In your mulligan, you will want to keep your low-cost cards, especially the ones that cost one mana such as Daring Poro. It has the Elusive keyword which means that only other units with the Elusive keyword can block it.

This lets you sneak past your opponent’s blockers and damage the enemy’s Nexus. I’d keep as many Daring Poros as possible during your run as they are hard to block or remove for the opponent.

After defeating the first match, you will get a screen that offers you 3 card choices that will look something like this: 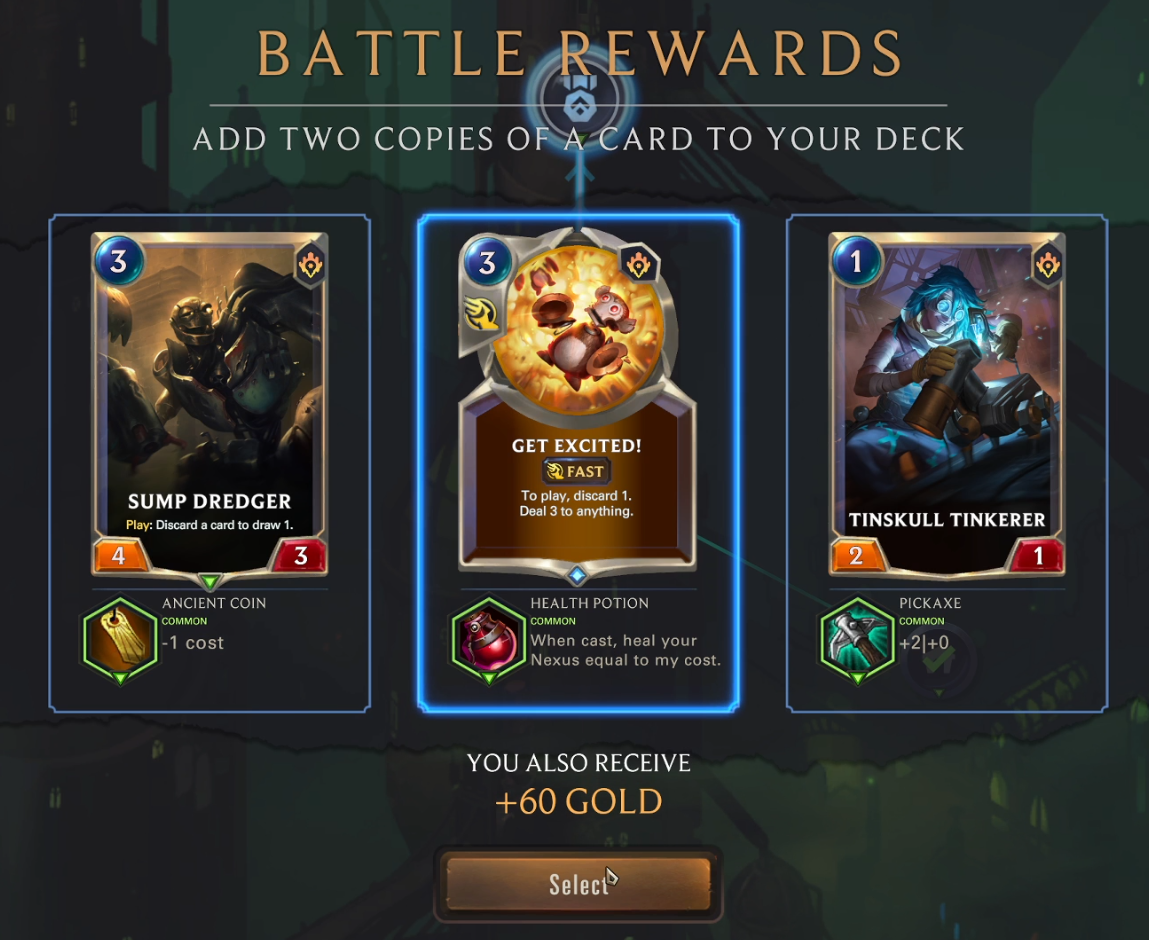 Each card will have a unique attachment with it. There are different rarities, common, rare, and epic. The rarities tend to go along pretty well with their power level, but that doesn’t make common rarities bad at all!

Generally, when given the chance, you will want to give your Daring Poros more attack and health as they are the surest way to be able to beat each of your opponents! However, if you don’t have Daring Poro as an option, no problem! The next thing to look at is the rarity.

Epics will tend to be very strong, so they should always be a consideration although they are pretty rare especially in the tutorial. After that, pay attention to cost reduction and healing.

Stats are good as well, but they are a lot stronger on units with the Elusive or Overwhelm keyword. Cost reduction is nice because you can play more cards on a turn or play a card earlier than expected. The healing can also be nice but can be odd depending on what card you get the healing on.

In this Battle Rewards, I would say that picking Sump Dredger or Get Excited are both good options. I would avoid the Tinskull Tinkler as a 1 mana 4|1 gets killed by a 1|1 stated unit and makes the buff inefficient. However, if this was on an Elusive unit instead, then I would grab the Elusive with stats over the other two options. 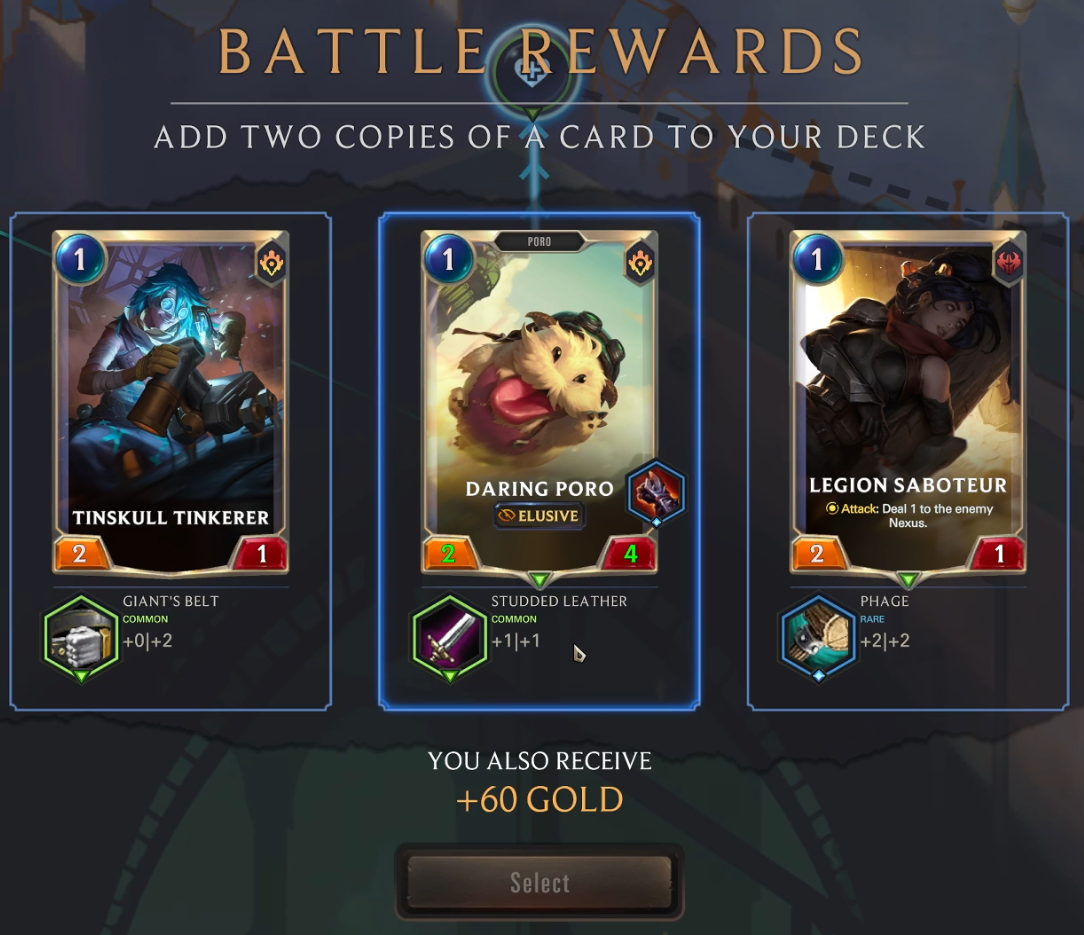 Next, you will find an additional reward token! This one will always offer you the same two powers: Battlefield Training or Explosive Entrance. If you want easy mode, then Explosive Entrance is guaranteed damage and always a good take here. 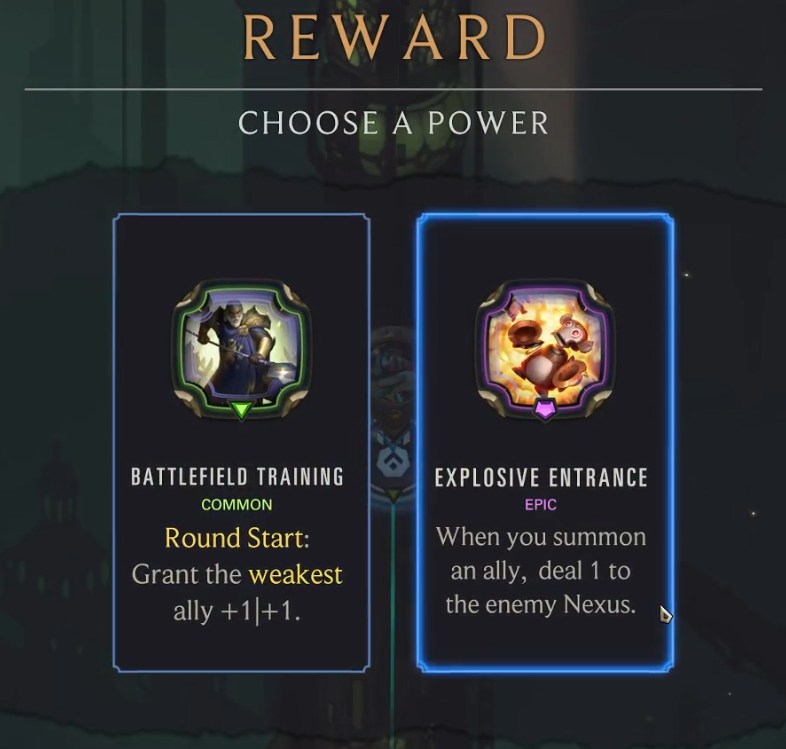 After two more battles, you will get a new reward, reinforcements where you recruit a champion to work with you! All of these are okay, but I personally pick Draven to play aggressive. However, Elise’s package gives you healing and solid early game.

My least favorite is Zed because I am generally relying upon the strength of my Poros already. But, if you made a large stated card that doesn’t have an Elusive keyword, then getting the Zed package for ghost to make your big creature Elusive is a good idea! 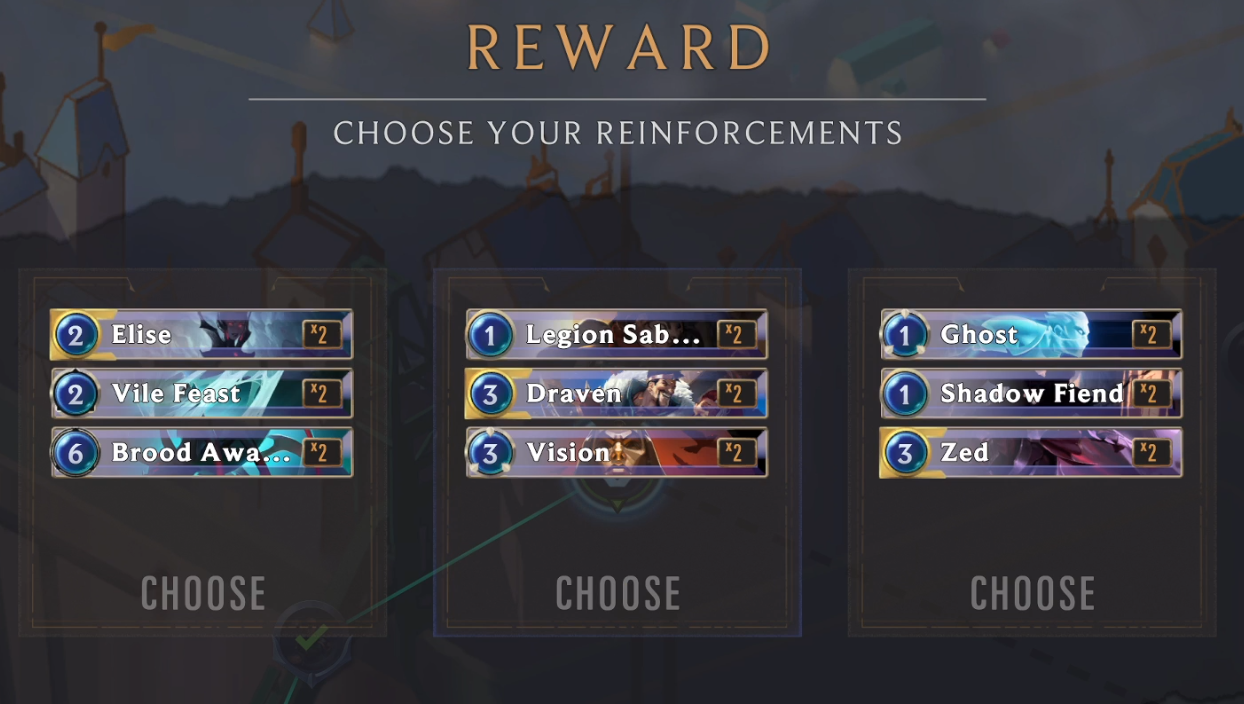 After recruiting a champion to help you on your journey and defeating your next opponent, Stinky Whump, you will come across your first healer. Healers offer to heal 25% of your maximum health.

If you are someone who is looking to get a perfect rank then you won’t want to heal here, but you will also need to be at 30 health already or have a way to heal in-game as the next boss will heal you automatically.

It is also important to note that once you pass the healer, you can not go back to them, so choose wisely.

In this case, I didn’t need to heal so I passed. I would say that if you are 25 or less health that you should definitely consider healing as it is unlikely that you will heal that much during your next fight. 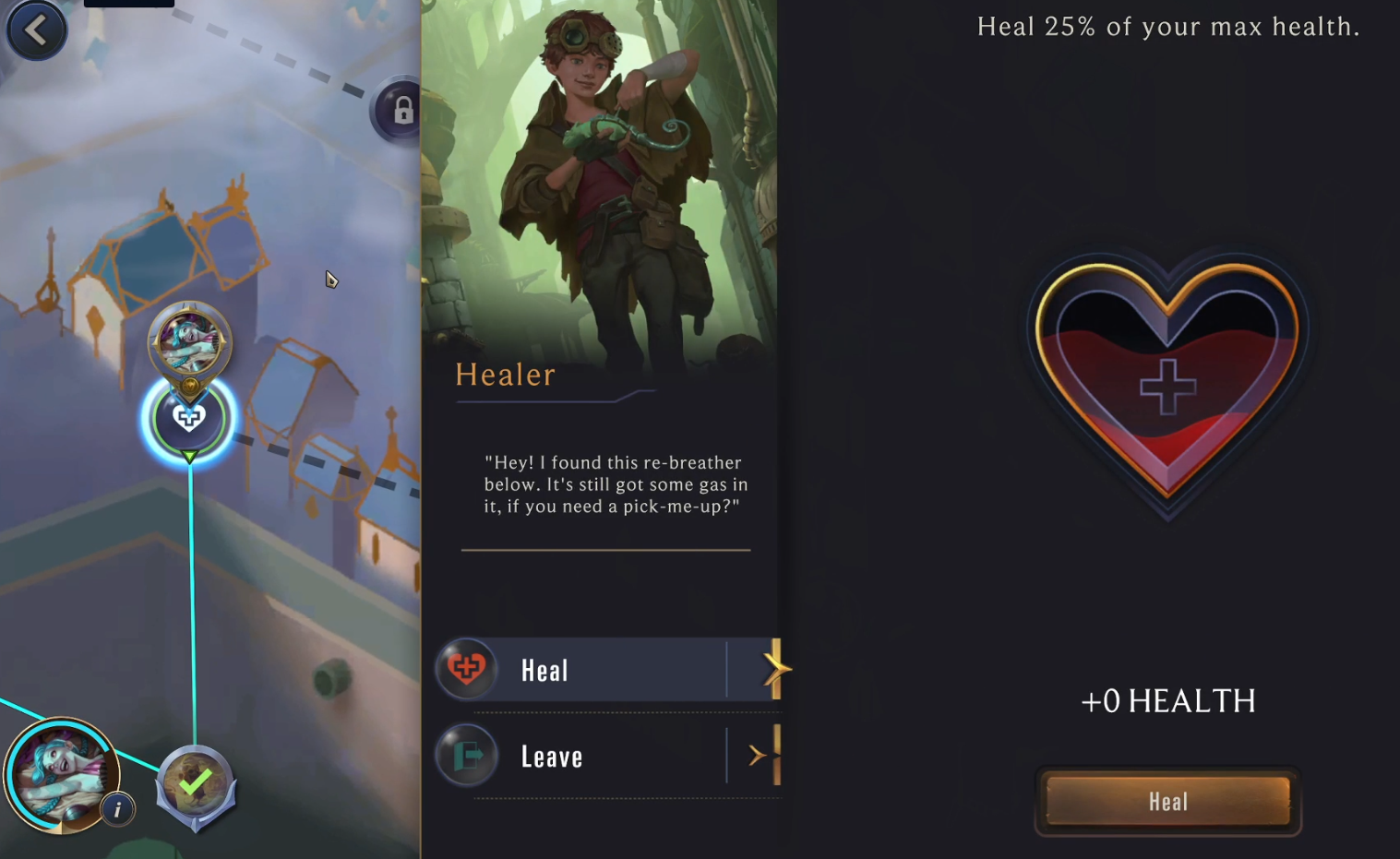 After healing you will face your first mini-boss, Caitlyn! Upon defeating her, you will have two options: to capture or ransom Caitlyn. These are both useful passive powers that will help you on your journey.

Personally, I pick Manaflow due to its strength. Most of the time I was relying on playing Poros, so being able to play two big Poros on turn 1 felt really good.

Also, the fact that Hold It! is at the start of the round means that it doesn’t Stun anything that was played that turn, so it can still attack or block. However, pick whichever one you feel like!

You will then reach your first divergent path where you can only choose one direction! Don’t worry though as they will both end up in the same place against Vi!

Either one is a fine choice. If you are low on health or a newer player, consider going through the top side as it has additional healing.

However, if you are feeling confident, then picking Professor Von Yipp at the bottom is the way to go! The bottom one with the “!” token will also allow you to add a new spell to your deck and typically have Epic attachments! 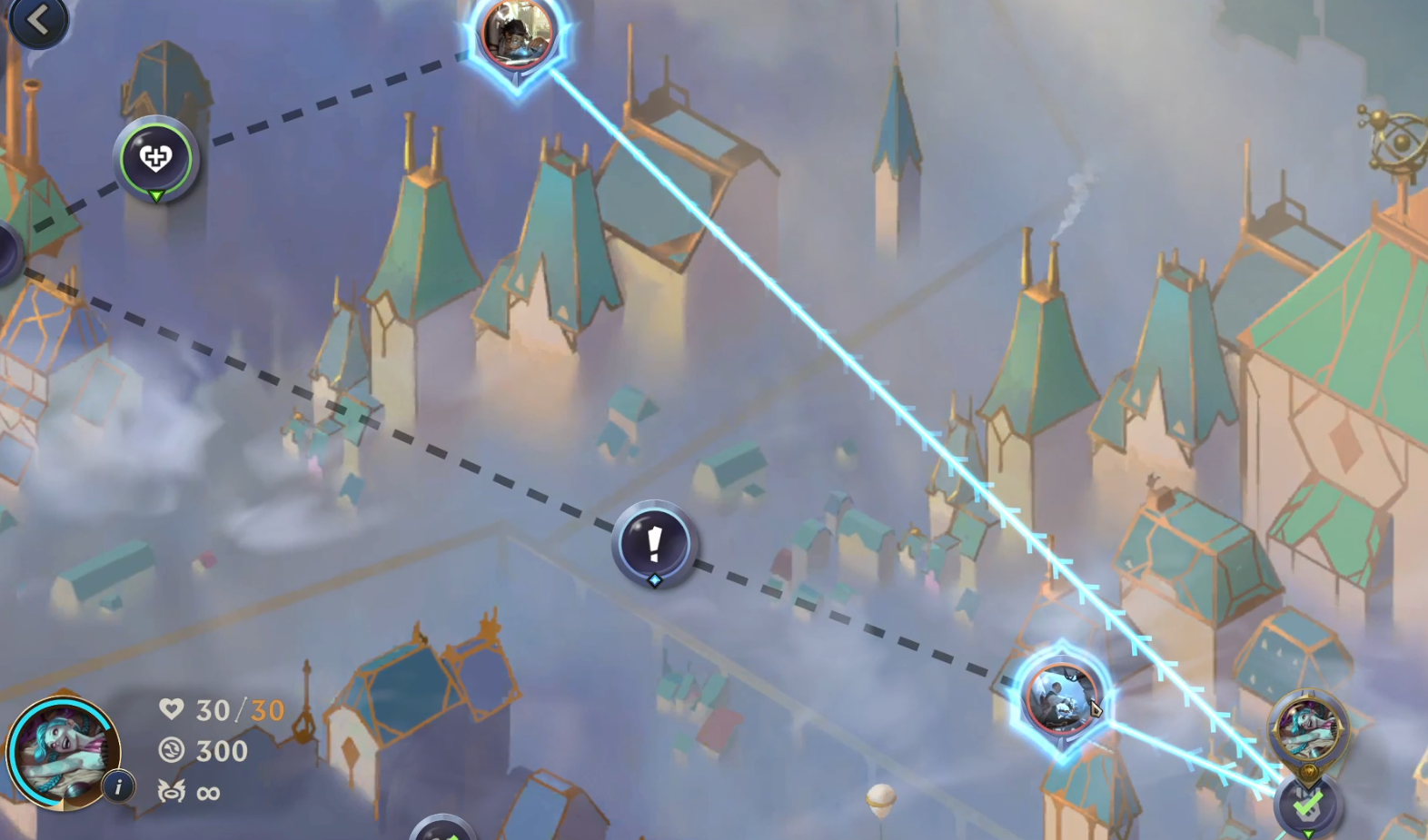 The final token before the final boss, Vi, is a shopkeeper. This is where you can finally spend all the gold you accumulated through the run. In the future, there will be multiple shopkeepers per run! The bottom number in gold is the amount of gold you have which is 360 in this picture.

The cards for sale have a white number with red next to them which is their cost. For example, an extra Jinx costs 200 gold. If you have the option to put more stats on Elusive, the same rule goes that you should consider it! However, make sure to pick what you think you will enjoy the most and what is strong too!

When you buy the card from this shopkeeper, he upgrades all other copies of the cards in your deck as well! 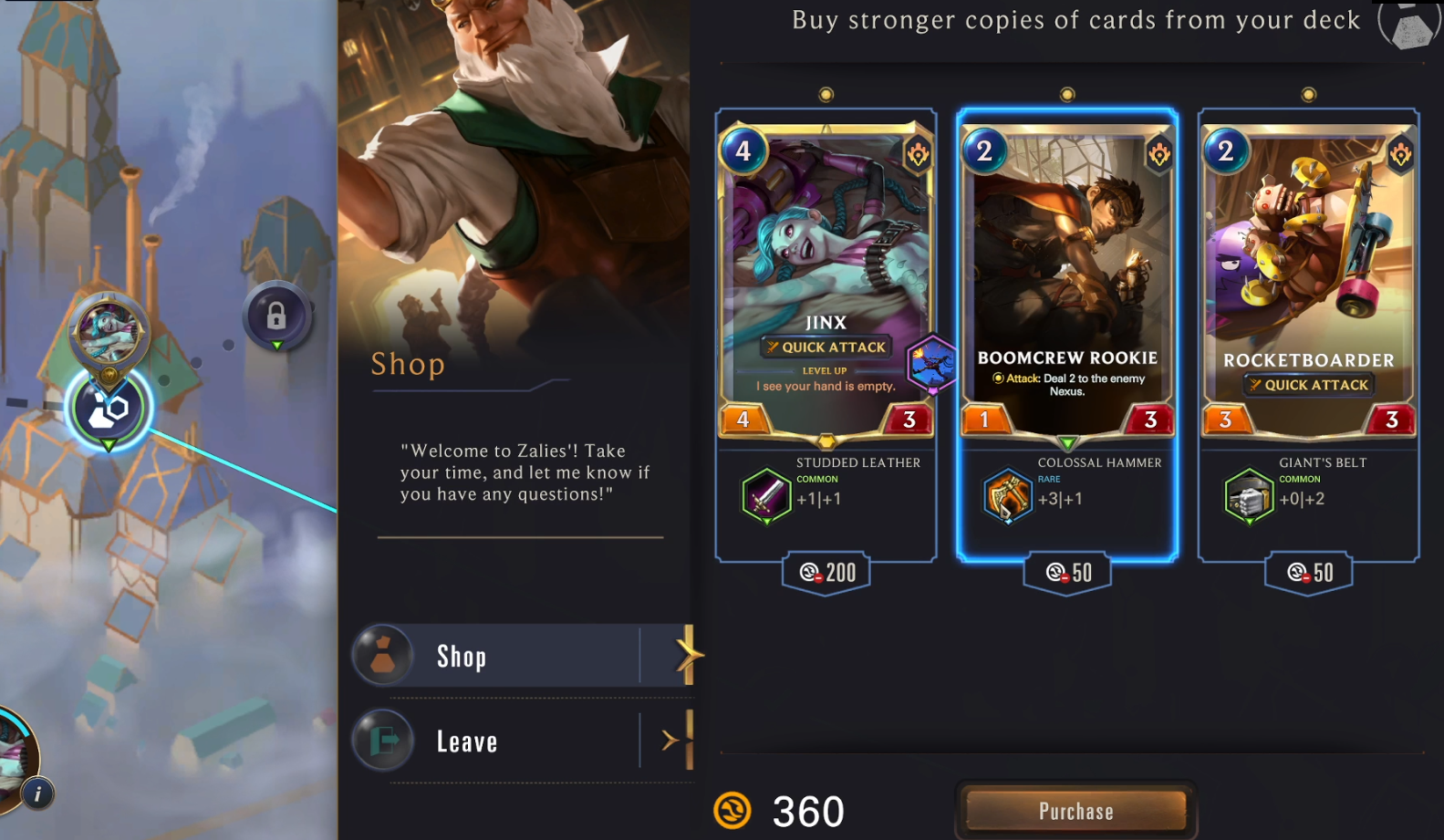 I don’t want to spoil the Vi boss fight for you, but if you play the game the same way you defeated the other opponents, then you will have no issue with this.

Once you complete the opponent, the story continues and you get to see your ranked badges and a review of your deck. There are ranks for Skill, Speed, and Wealth. This is an example: 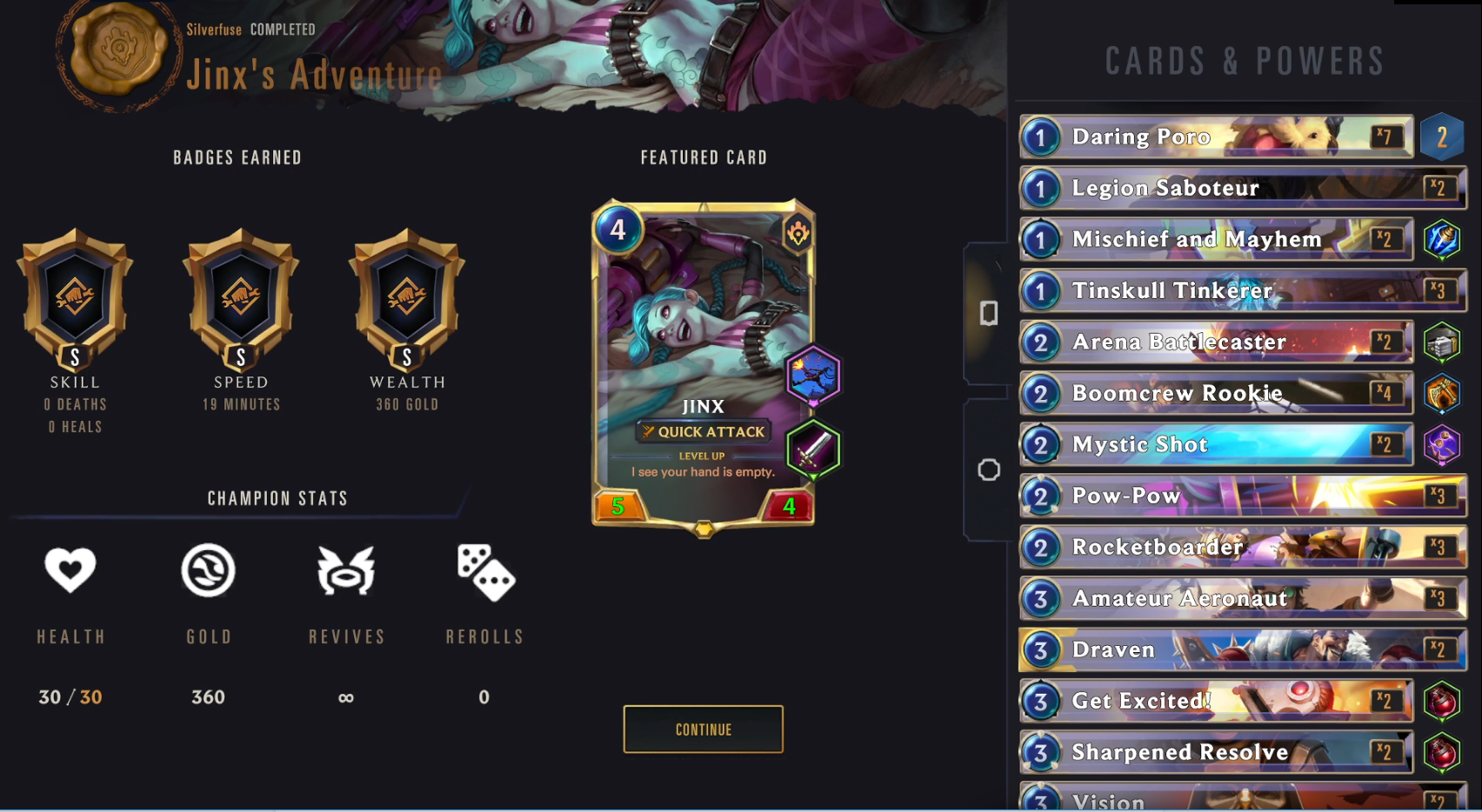 You will also gain 50 reputation which will allow you to level up Jinx by clicking on the bottom left portrait of her!

Next, you will face Lulu in Ionia by clicking the top of the screen and heading on over to Ionia!

This is a basic guide for the tutorial of Jinx, but I will cover more advanced topics in a future article.

I hope that you found this article helpful and that you enjoy the new PVE mode!