Path of Champions Getting Started Plus Tips

The latest version of Path of Champions features 12 champions in which you can explore Runeterra and face different AI opponents.

It allows you to play at your pace with no rope and it is completely free! It has been the mode of choice for a variety of players. However, it can be a bit intimidating starting it in the first place.

In this article, I’m going to cover the basics of unlocking additional champions, leveling them up, picking Relics for your champions, as well as some basic tips that will help you win more games!

At the start, you jump straight into Jinx’s campaign against Ezreal. Upon completing this map you will receive champion experience points and additional Jinx Fragments. The fragments are useful for leveling up your champion’s “Star Power” to its next star rank. Each star gives you an additional passive power that will make your run easier.

For example, at one star Jinx gives you the power to which gives “What’s the Worst That Could Happen?” When you play o discard a card, deal 1 to the enemy Nexus. At two stars, she gets “Wreak Havoc” +1 Starting Mana. When you level up a champion, create a Super Mega Death Rocket! In hand.

The jump to two stars is really important as an additional mana is the same as an Epic Hero Power: Mana Flow. Starting with an additional epic power at the start of each campaign is super helpful! 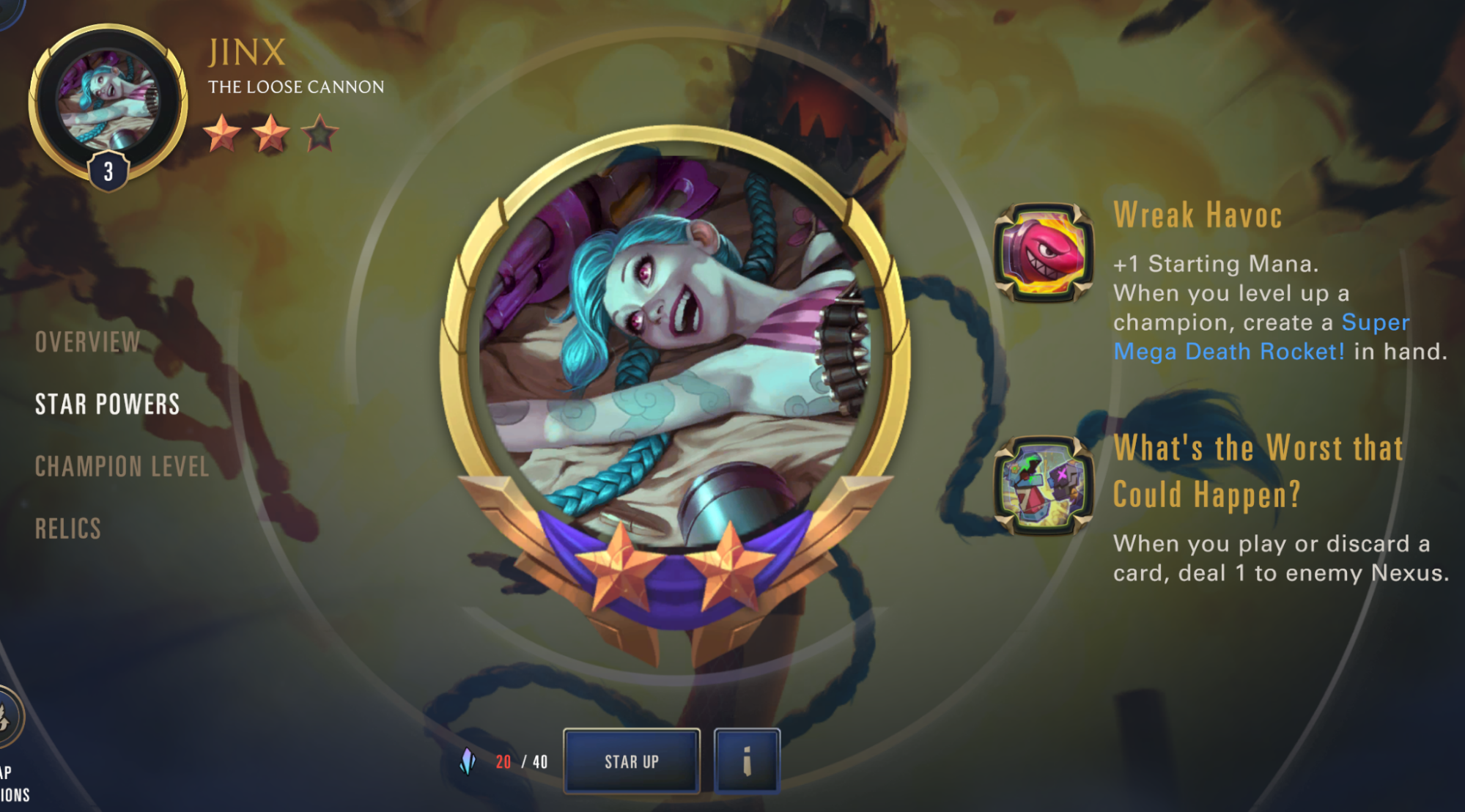 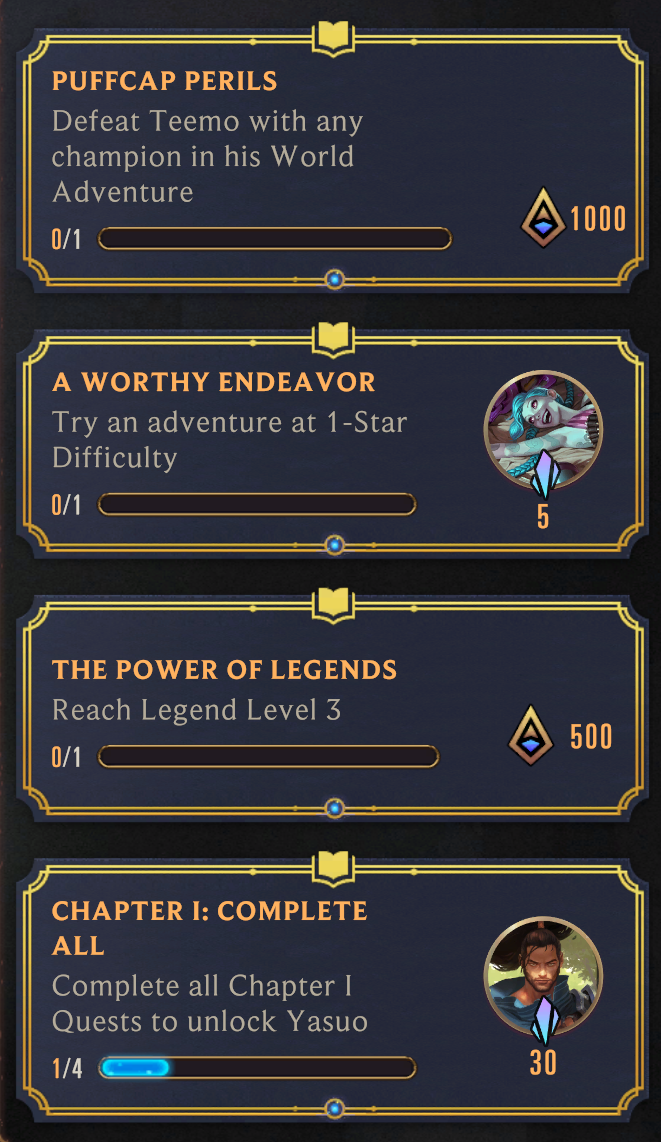 Currently, mine looks like this. There are some issues with the current fragment acquisition as you can see I haven’t been able to unlock some champions despite hours of play. However, if you are frustrated with this, this is something that is planned to be updated in the future so that you aren’t locked out of some of the champions.

I still have more ways to earn more fragments, so my progress isn’t completely halted as I have plenty of content left to play, but it does mean that if I want to play Illaoi for instance – I’m not sure when I will be able to do that. 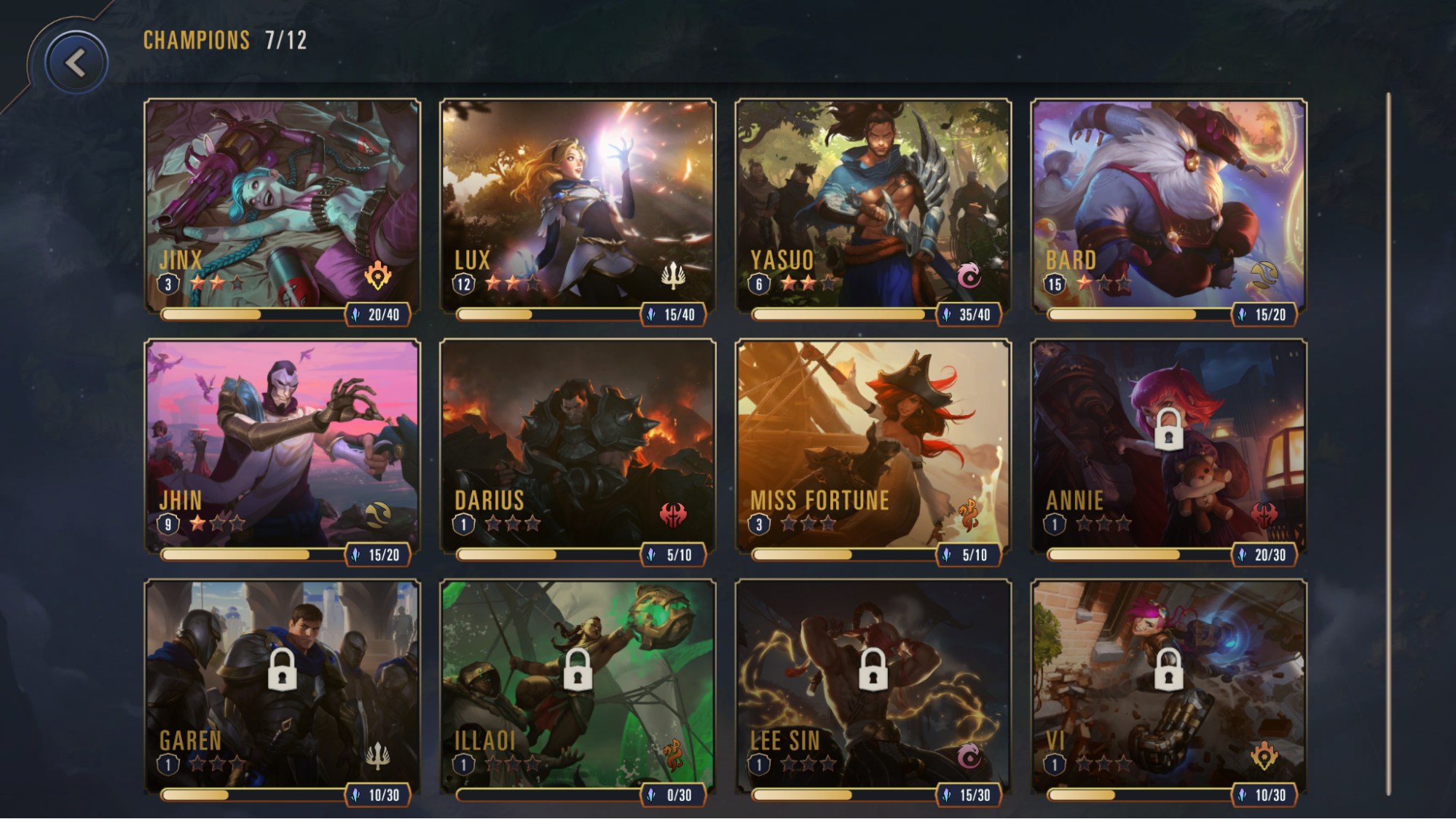 Leveling up your champion through champion experience is important and will make your runs easier. The champion experience gives you a higher champion level which unlocks deck upgrades. By looking at the Champion Level tab, you can see what your current upgrades are and what the future ones will be for each level. A stronger deck is incredibly helpful along with Star Powers – especially Star Power 2 as mentioned earlier. 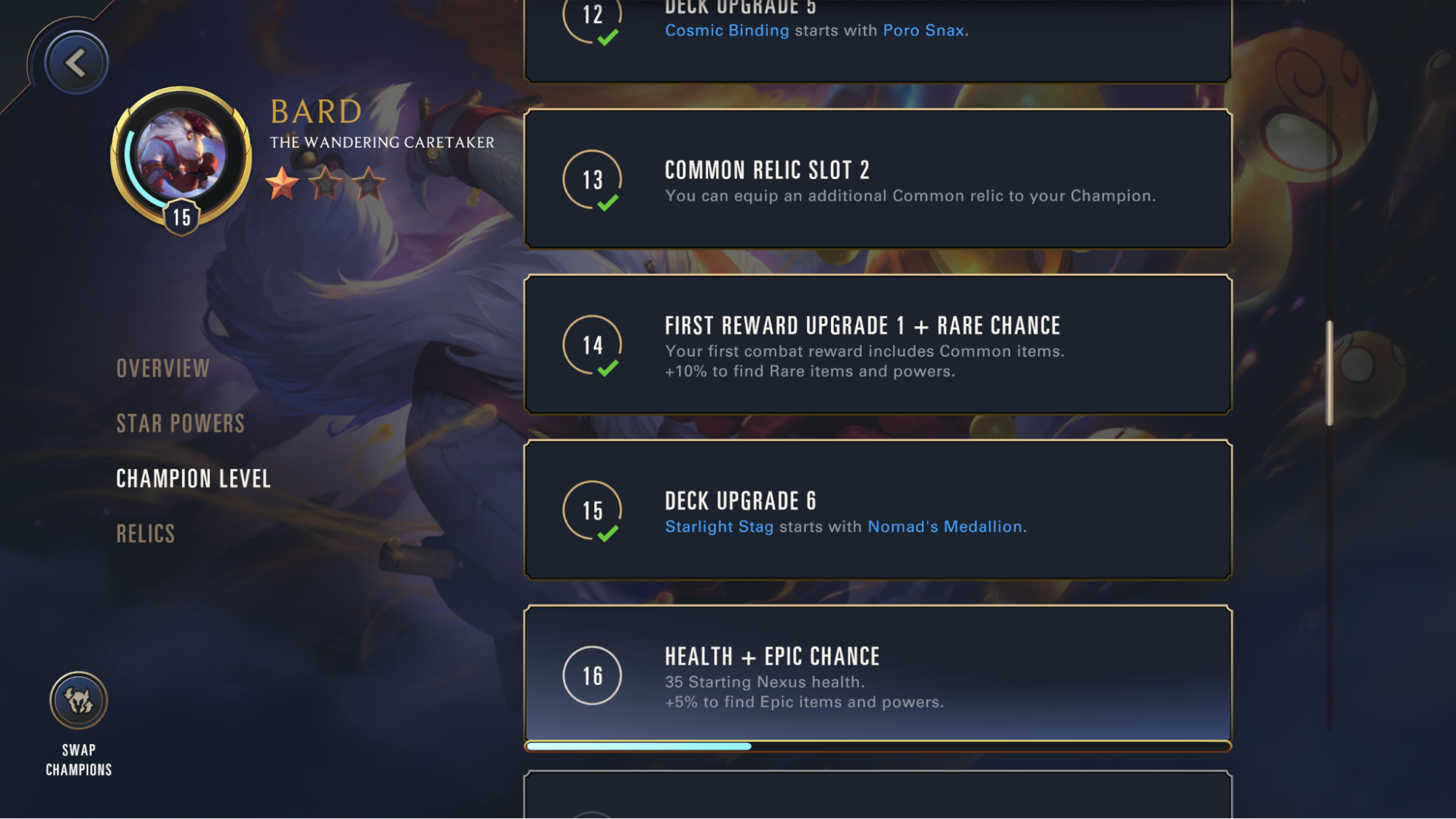 The other important thing that champion level up gives you is access to more Relic Slots, including rare relics. Relics can be chosen individually for each champion. They can range from giving your champion additional stats, keywords, or other things that can help you within your runs such as additional rerolls. 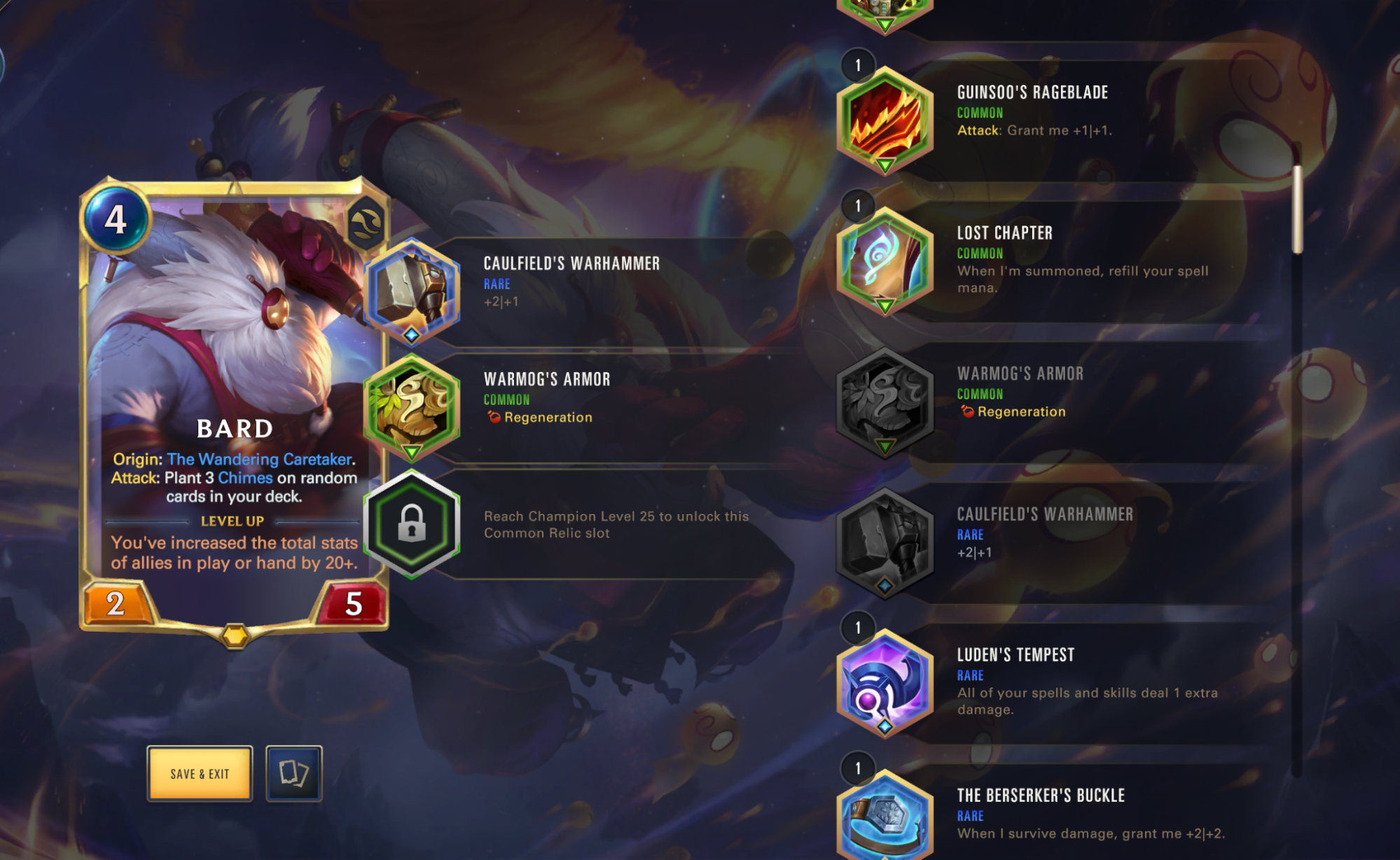 Some basic tips are champions who are required to attack with high health such as bard can benefit from Relics that give Regeneration or Challenger.

It’s also important to note that although you can’t start with it, whenever you have the option to put Nomad’s Medallion and make your champion cost less – it is generally a good idea. For example, playing a 3-cost Lux instead of a 5-cost Lux is game-changing! So keep an eye out for attachments that allow your champions to get on the board earlier! 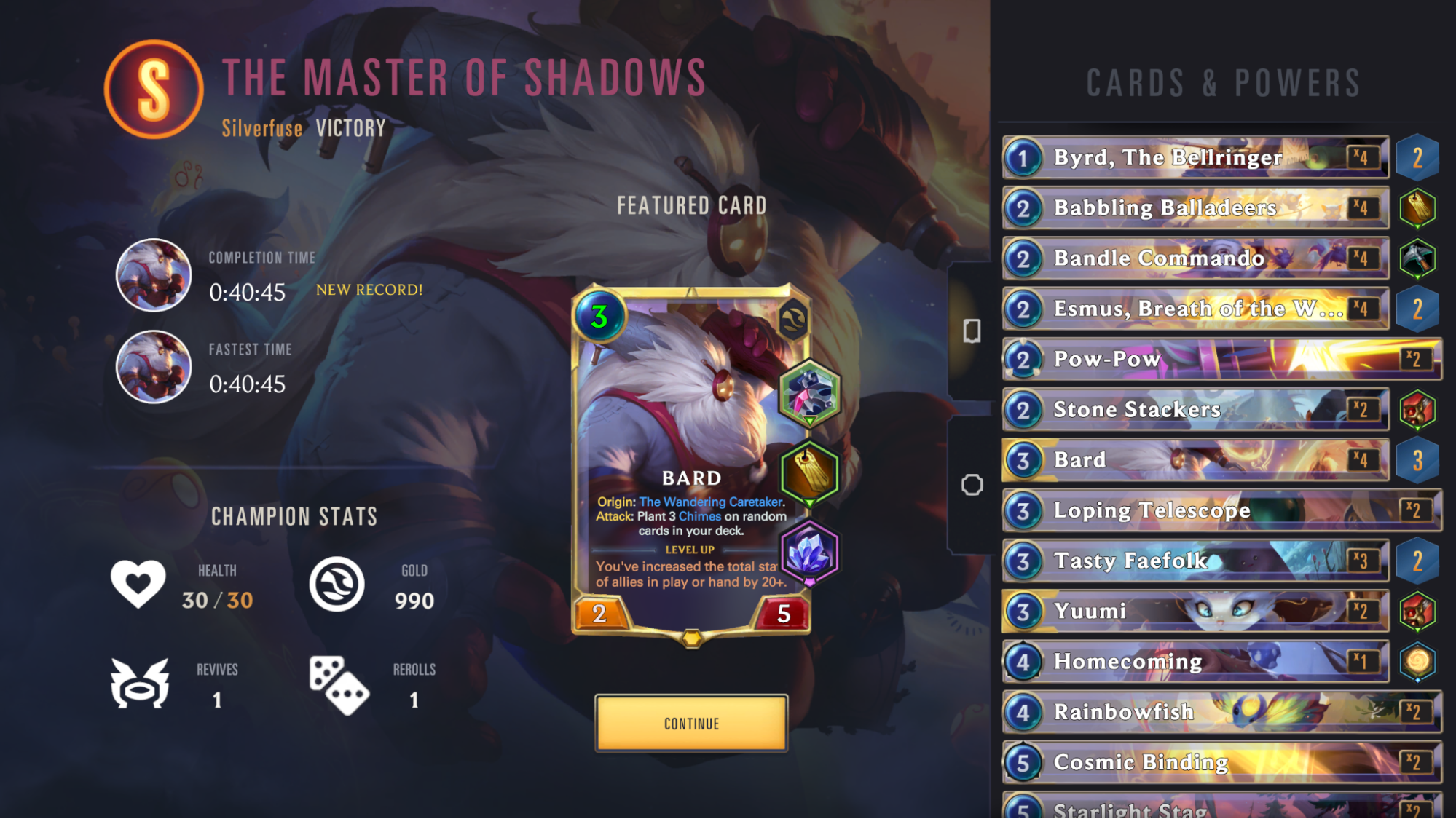 Bard with 1 cost reduction which allowed him and a gem that refilled the mana I used for him. This allowed me to gain tempo early in the game with him. I have since changed him to a regeneration card, but Spellsheild can be fine for him as well, especially if you are leveling him quickly. 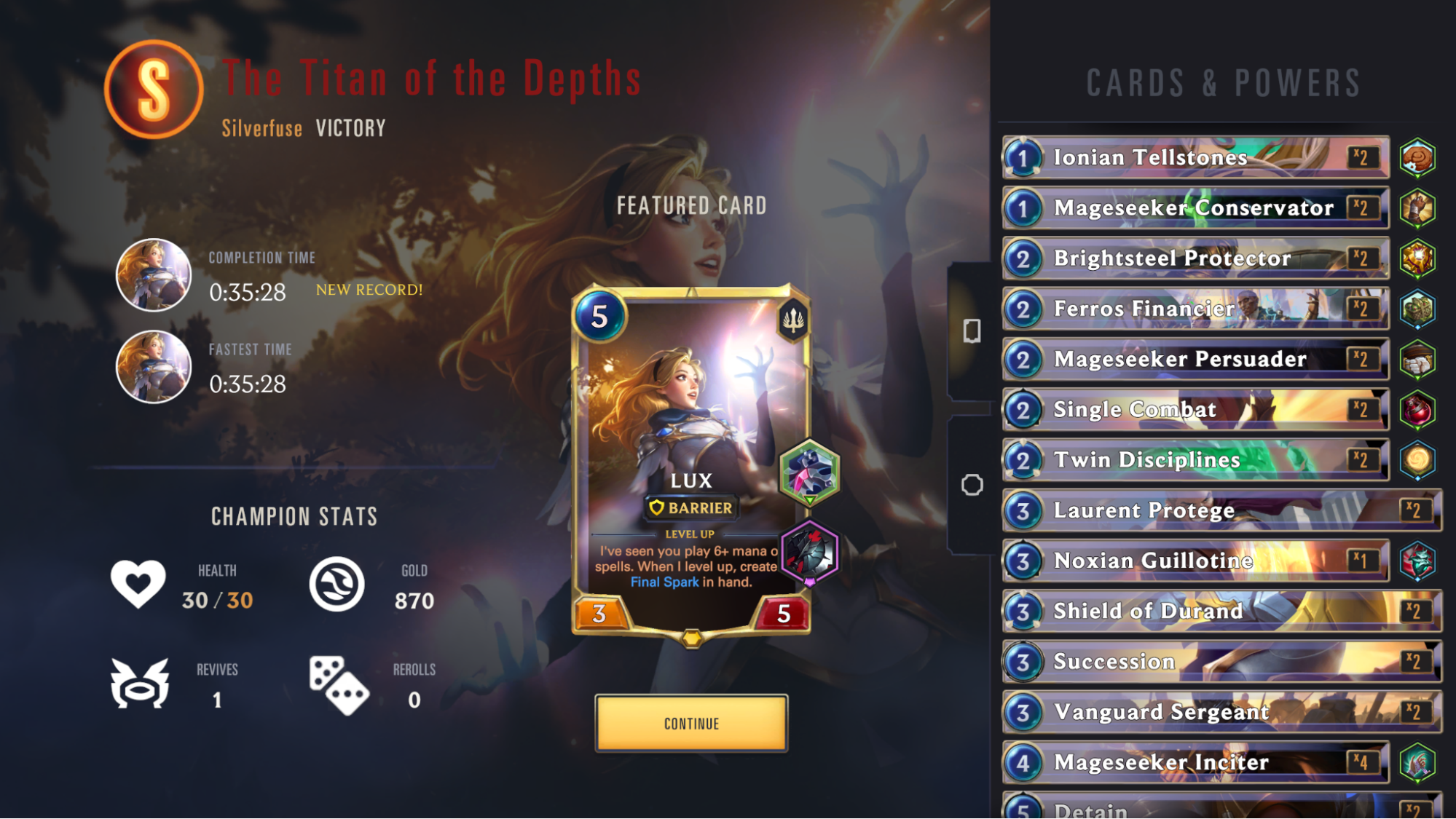 This was Lux vs Nautilus which is a 2-star boss. Spellshield is what helped me win against a lot of decks as they couldn’t remove my Lux and I also got a bit lucky by getting the epic attachment that doubles health and attack!

If you see this in your shops, I highly recommend it as long as the champion you are putting it on is more than 1 health or attack. It is not as useful on a Teemo or Zoe compared to champions with higher health.

For the champions I currently have unlocked, I have found the more Miss Fortune, Darius, and Jinx to be the easiest. With all these champions, you want to draft attachments that either

Of course, going with point 1 finding ways to give yourself more mana at the start such as getting Mana Flow as your hero passive power is incredibly helpful. I have personally found Passive Powers such as Raiding Party to be helpful as well to give my low-cost units more stats.

When drafting for these more aggressive decks, you don’t have to worry about drafting healing cards as much due to the speed you win against your opponent. However, drafting a bit of health regain is never a bad idea in these runs.

Following that I would say Lux then Yasuo are the next easiest champs to play. Lux fits my personal play style well as well as because she is part of your missions, you are able to get her to Star Power 2 pretty easily. Once you have Star Power 2, she becomes a lot easier to play as most of my games were closed out by using the 0-cost Golden Aegis.

A general tip for her is to watch out for reducing the cost of your spells – especially the 6 cost ones. You don’t want to have to play two 5-cost spells to level up a single Lux and this also means you will get less 0-cost Golden Aegis. Lux is the exception to the rule that generally cost reduction is an instant draft. 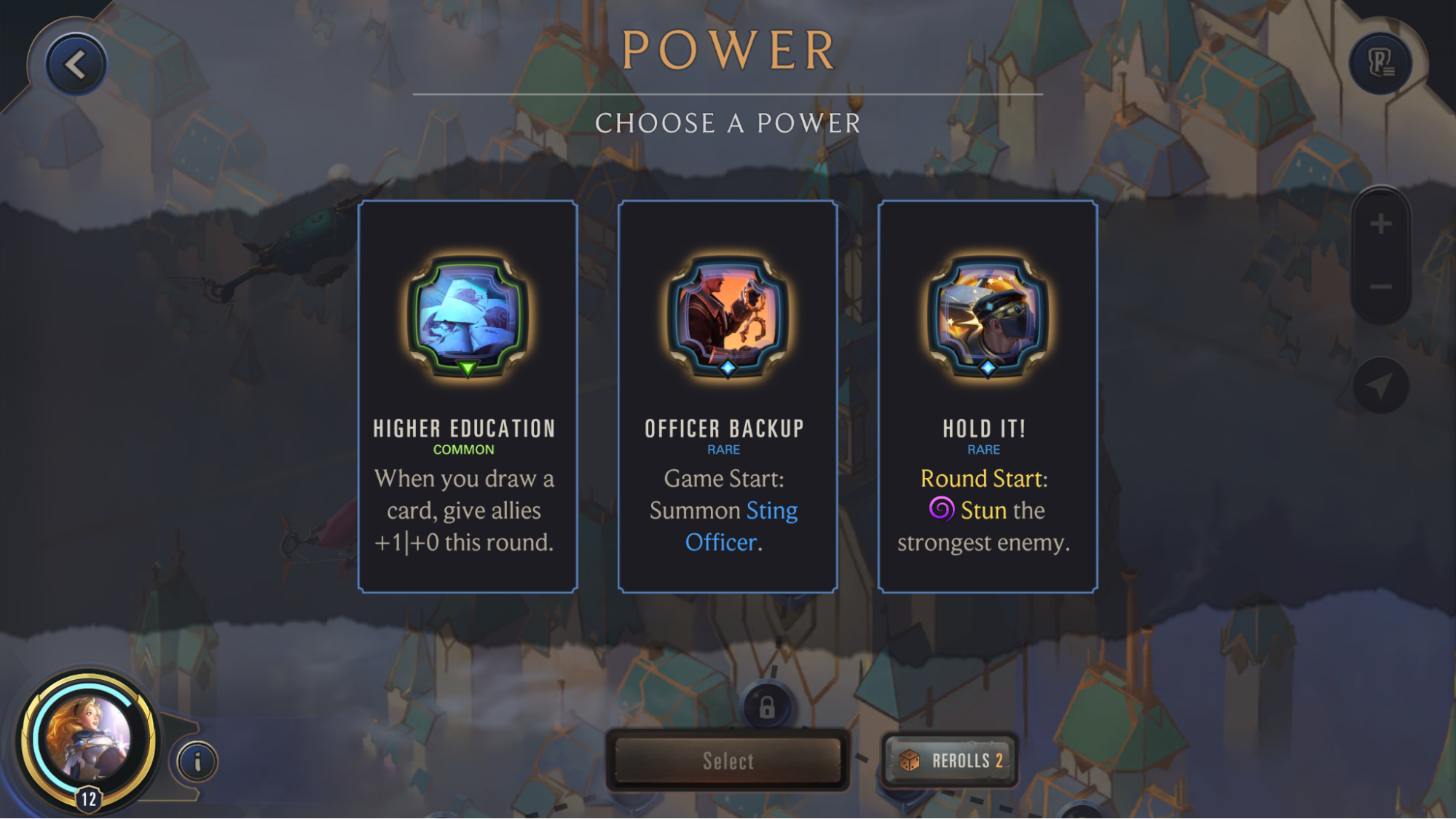 For Lux’s Passive Powers I like to pick things that help delay my early game. This is generally in the form of summoning units at the start of round 1 or in this case Hold It allows me to delay the early game easier and what I’d pick out of these three power options.

Yasuo hailing from Ionia is a bit more defensive. You spend a lot of time stunning your opponent’s units which will cause slower games as a whole. For this reason, drafting cards that can heal you on your adventure is a lot more important on Yasuo than on other champions as there will be some cases where you will have to take hits from your opponent just because you have limited access to cards in the early game.

Also, if you are ever given access to Passive Powers that allow you to Stun your opponent, take them to faster level your Yasuo as well as help you survive the early game easier!

Bard is the next hardest champion primarily because you don’t have many ways of interacting with your opponent’s cards when you play Bard. On top of this, a lot of your games you will be trying to roll Lifesteal in order to heal yourself up for the next match.

This can make some games be super prolonged as you take a beating early in the game and are looking to heal up. Currently, I haven’t been able to make Bard Star Power 2 yet due to not having enough Fragments, but I have still been able to defeat all two star bosses. I have given the 2.5 star bosses a shot a couple times but without the extra mana from Star Power 2, it is quite difficult.

When it comes to Bard’s Passive Power picks, I like to draft things that give your units additional stats so Bard can level up easier. For example, out of these 3 options, I would pick Battlefield Training because the additional stats will help my Bard level up faster! 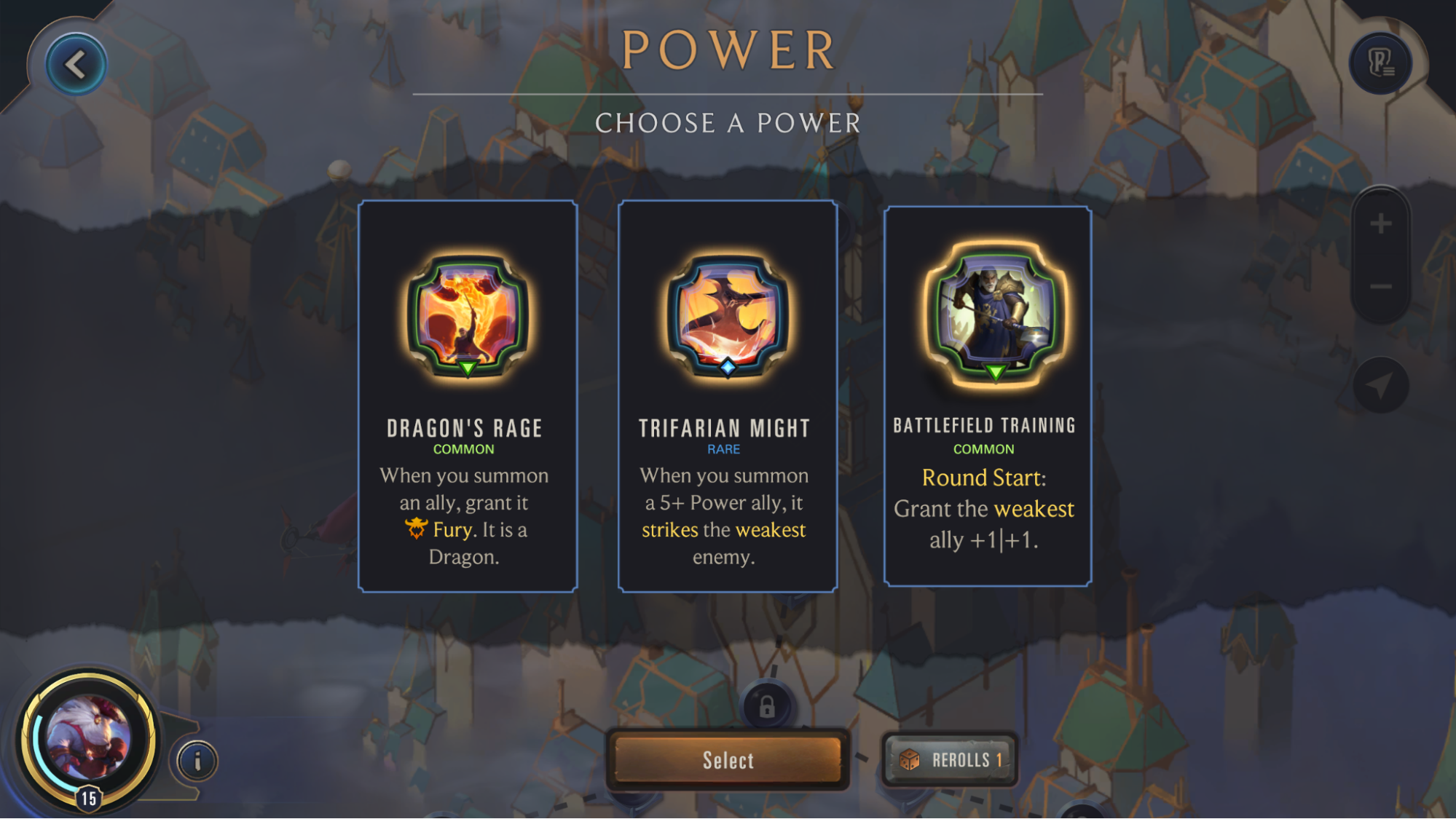 With Bard, I try to draft additional draw as well as cost reduction. The draw is more important with him as drawing additional Chimes is very helpful! His Star Power also giving buffed cards keywords is super helpful!

An important thing with Bard that isn’t the case for other champions, you want to get Champion Items as much as possible because by putting an additional Bard in your deck, this also means you get an additional Chime shuffled into your deck each round! Further helping your Chime gameplan!

The hardest champion by far was Jhin. It’s not even close, so if you are really looking for a challenge, Jhin is the way to go. His early champion levels giving you 30 Nexus Health, Manasoul Student having a 2 extra health, and Boomcrew Rookie having 2 extra attack helps a lot!

I also found Raiding Party giving +1|+1 to the top unit for each Nexus damage to be incredibly helpful as Jhin and Manasoul Student are always pinging the enemy Nexus. When possible, I’d draft stuns with Jhin as they would delay my opponent, allow Jhin to get more value, as well as when Jhin is on board allow Jhin to kill opposing units. If you can’t get a hold of stuns, low cost skills are the next best things.

Finding healing on Jhin is also a lot more important as your games aren’t as fast as the traditional aggro decks like Jinx and Miss Fortune, so you will take some damage until you are able to finish off your opponent. 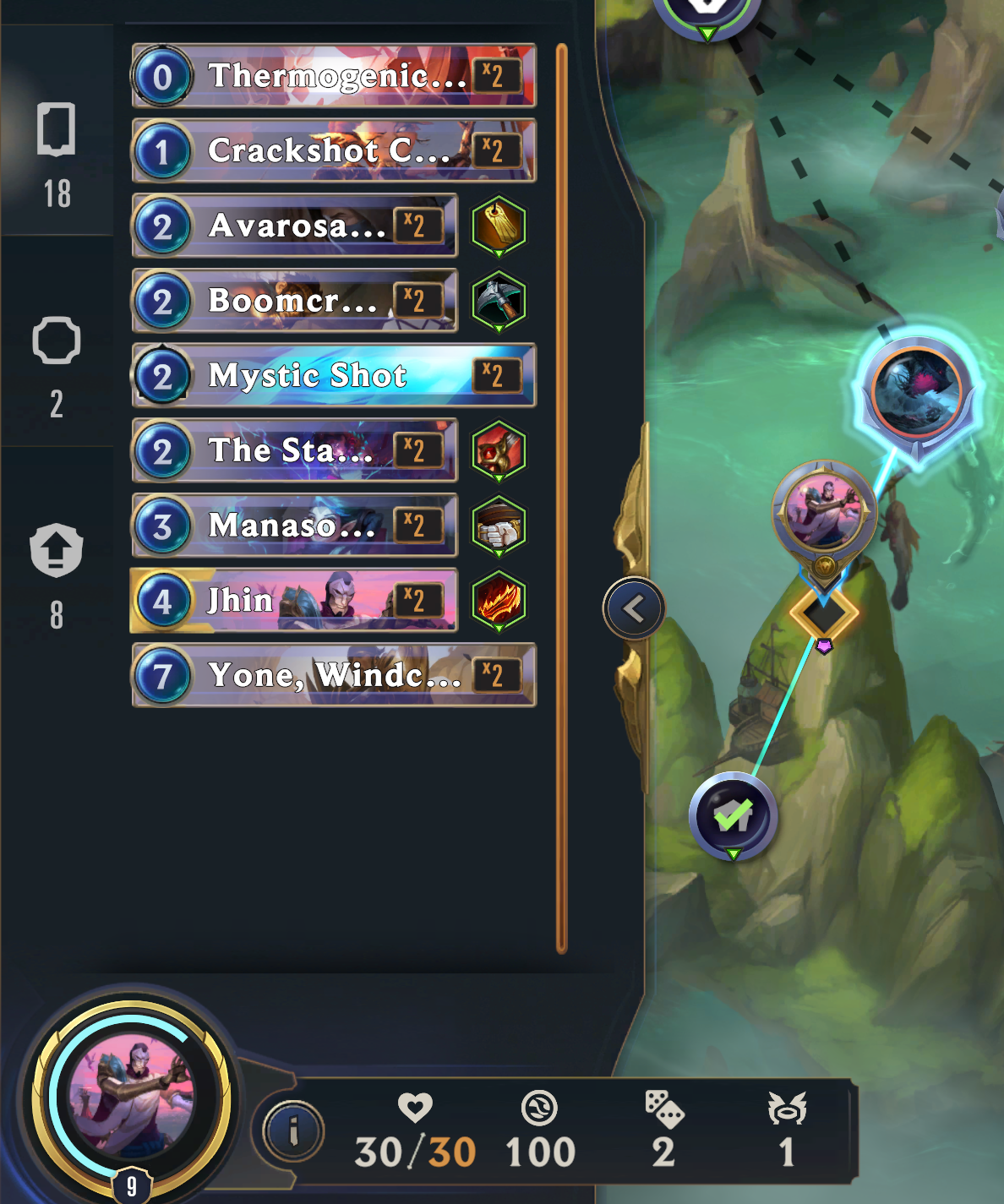 Starting deck of Jhin at level 9. Multiple attachments make it easier to win games with Jhin.

Path of Champions is a fun game mode that I have sunk many hours into. At first, it was a bit confusing so I am hoping this article along with some general tips helps to be able to jump into it a bit easier!