Hey all, it’s Trevor “Shugo” Yung here. Now that we’re a couple of weeks into the patch, I want to take a moment to give you a glimpse into Patch 3.10.

After a plethora of buffs and nerfs, we’ve seen quite the variety of decks looking to make their return.

Of course, I can’t cover everything.

I’ll be leaving out the obvious players from the previous patch that didn’t receive nerfs (Aphelios PnZ, Nami TF, etc.) and will focus on those who were affected or emerged from the patch. 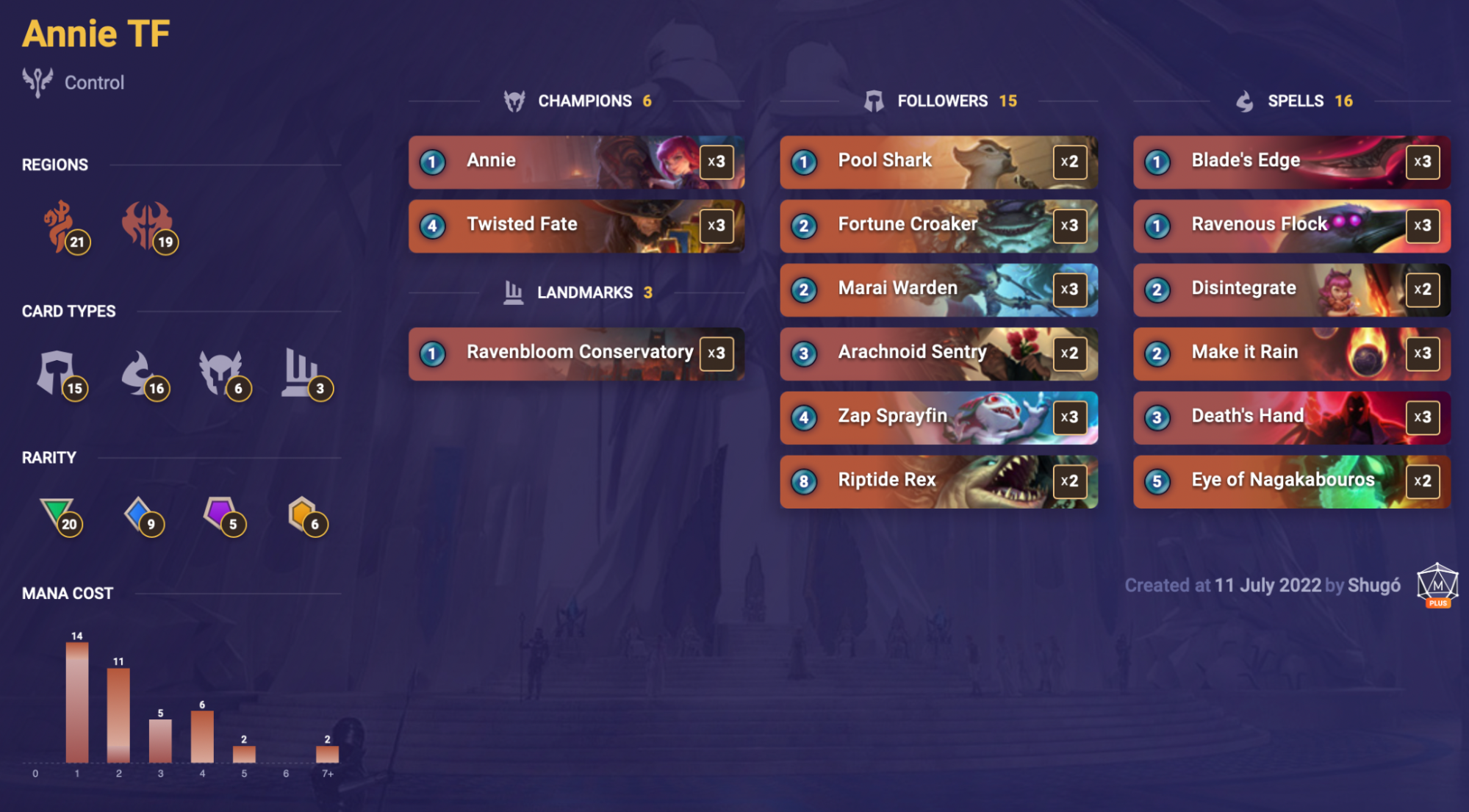 Annie TF was the first popular breakout deck of the patch. With Riptide Rex returning to its former glory, players were eager to give it a spin. After all, it’s another flavor of Ravenbloom, and that’s been a popular archetype since its release. Add in Rex and suddenly things get extra spicy!

The deck’s not a complete newcomer, as we did see some experimenting with BilgeNox Ravenbloom earlier on. However, it was far overshadowed by the PnZ variant; Annie Ezreal.

Annie TF had a good performance the first couple of days, but as the meta adapted to its ways, it found itself in a similar position to Annie Ezreal. It punishes decks that play a fair game but gets outclassed by those that don’t. 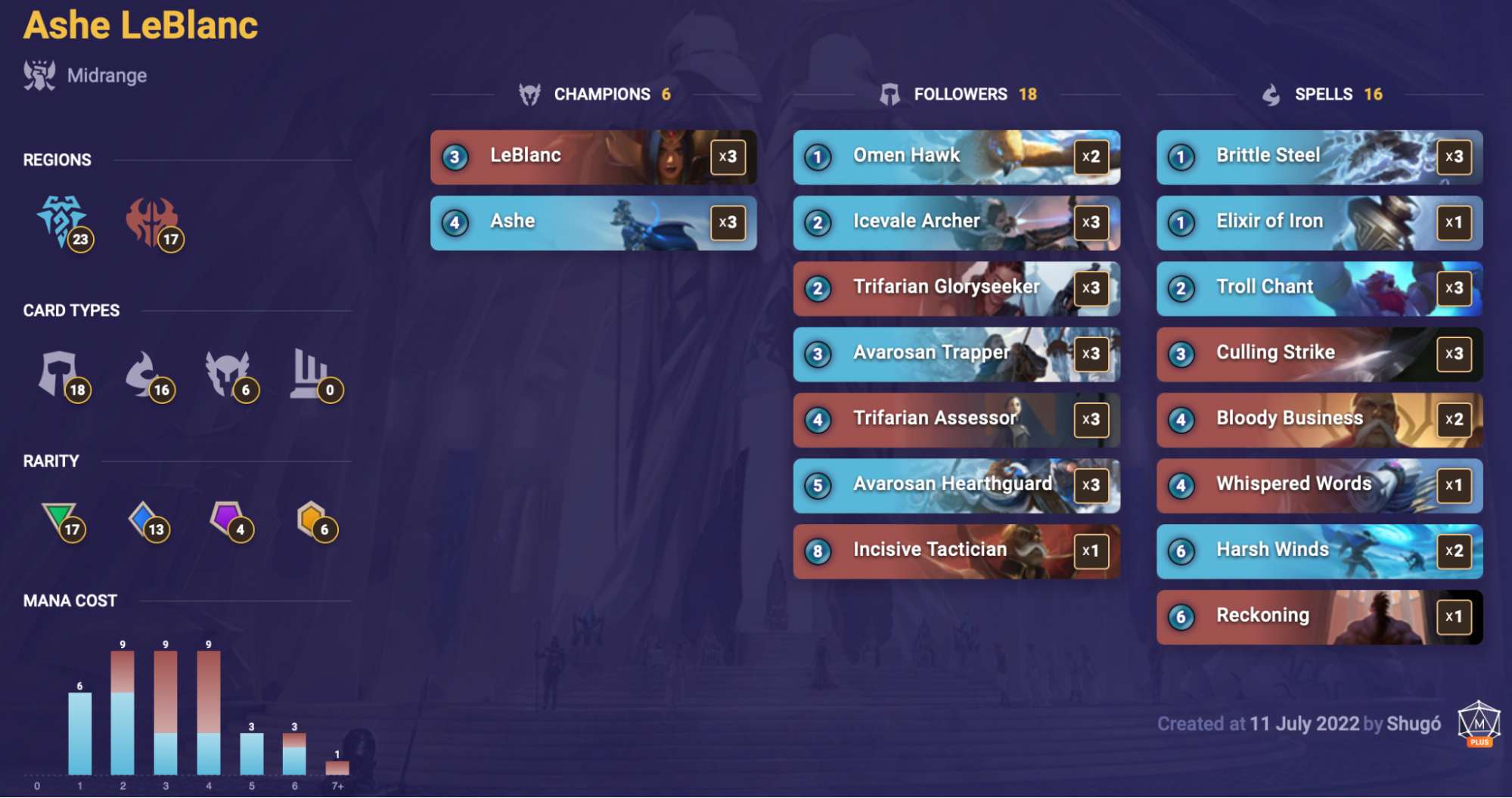 Ashe LeBlanc is quite possibly the deck that received the biggest buffs overall. Both Trifarian Assessor and Avarosan Hearthguard have returned to their former glory, and are definitely respectable cards. Trifarian Assessor is one of the most efficient sources of card draw in the game! However, it comes at a cost.. Playing a fair midrange game.

Ashe Noxus is a deck that thrives against other board-centric decks like Demacia. Between freeze spells and powerful buffs like Troll Chant and Elixir of Iron, any combat-oriented matchup becomes extremely favored. However, when combat isn’t the name of the game, Ashe LeBlanc struggles to do anything at all.

Unfortunately, Ashe LeBlanc just doesn’t fare well in today’s day and age. Its matchups are too polarizing, which makes it hard to find consistency on ladder. While the deck can thrive in certain pocket metas, the most powerful decks attack the meta on a different axis. 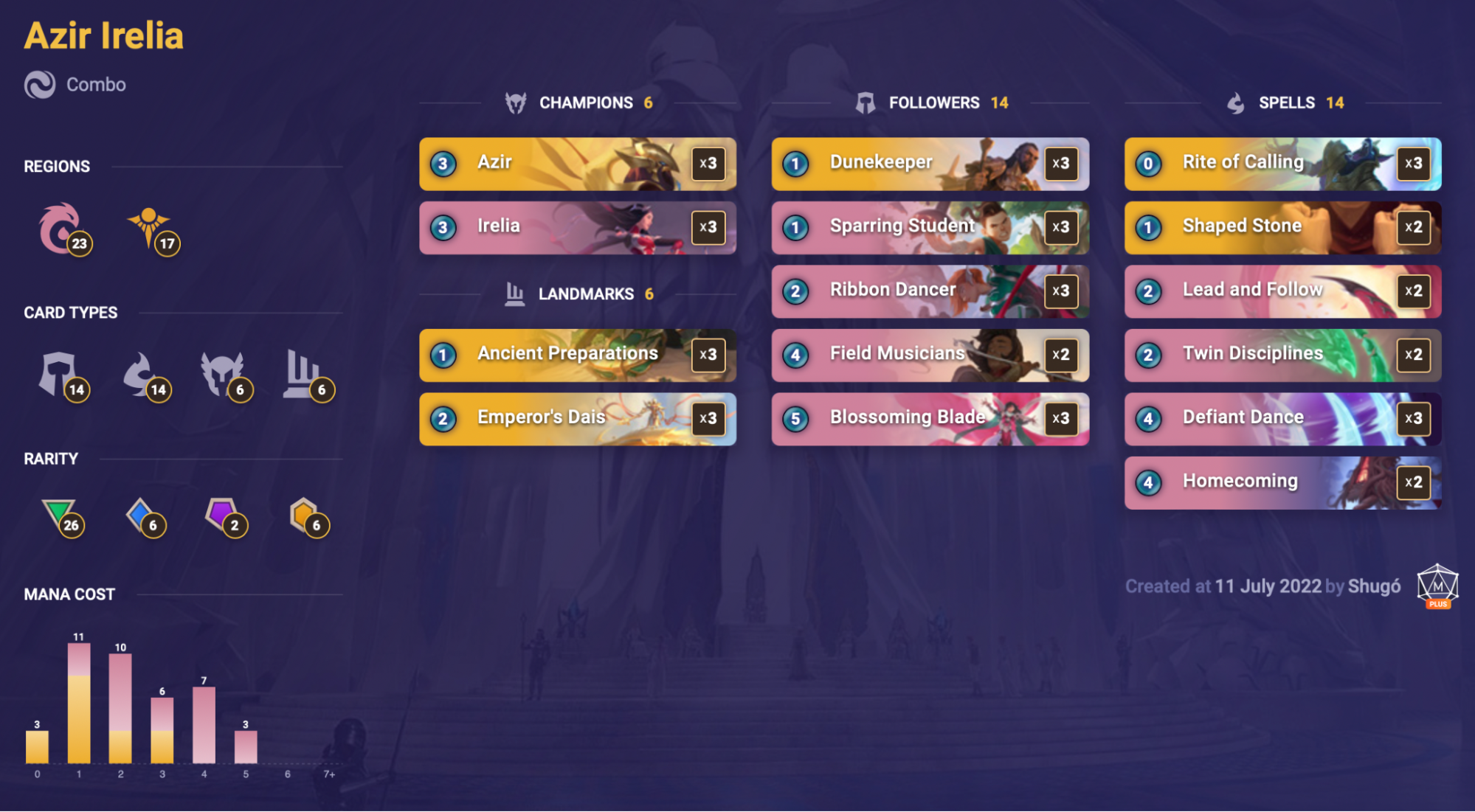 Irelia was one of the few champions to receive a notable buff, and it sparked a resurgence of an old favorite (or most-hated..) archetype. Adding Attune was a popular request, and has been a good way to help Irelia cast her two mana Flawless Duet.

Aside from that, the deck’s pretty much the same. Was the buff enough to put Azir Irelia back on the radar? Well, sorta.

Azir Irelia has actually been a reasonable option for a while even prior to the buff. The deck plays well into Thralls, which did give it a reasonable position in the previous meta. It’s a fair consideration, but it’s definitely not the overpowered monster it once was. 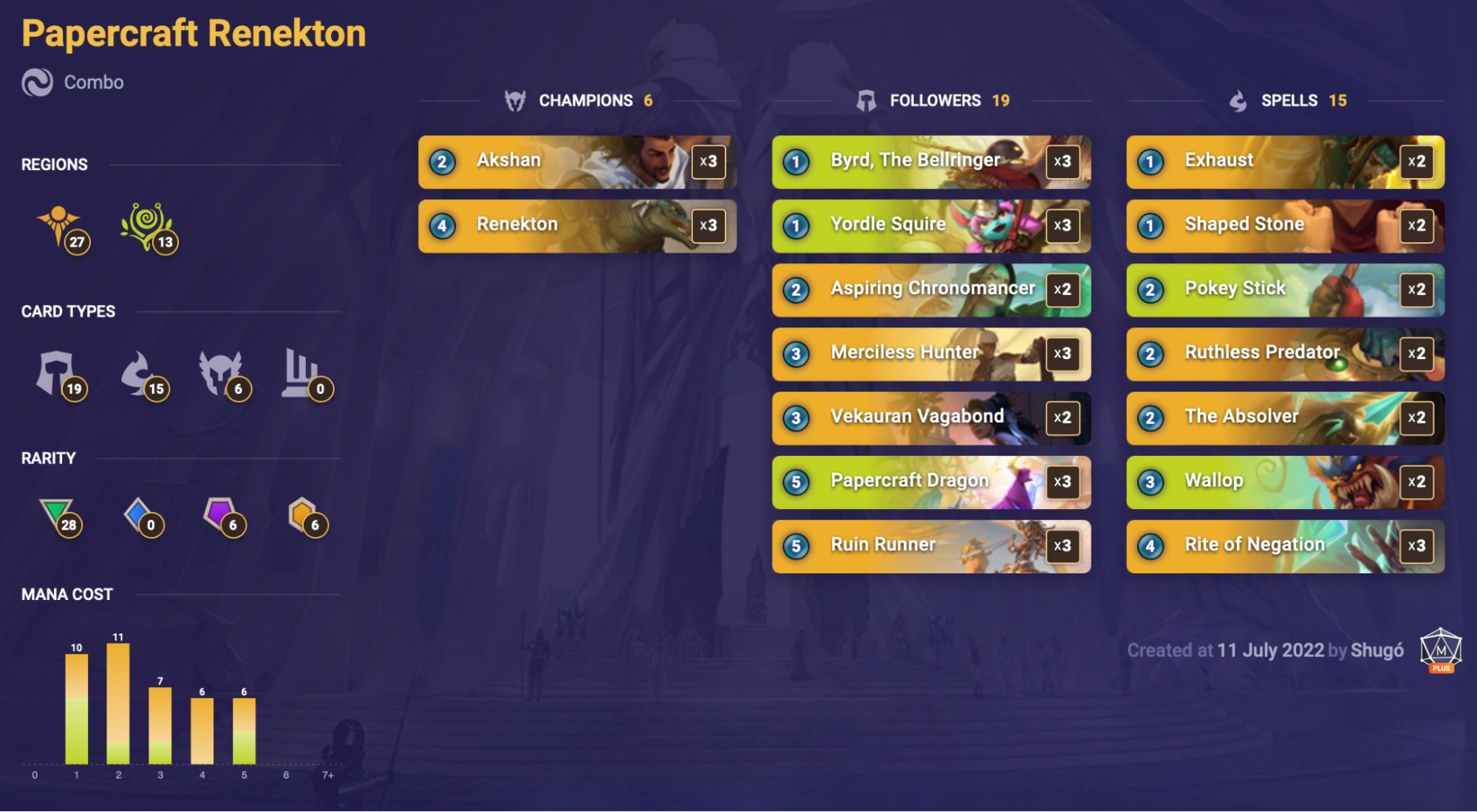 Reminiscent of the old “Paper Gnario”, Papercraft Renekton is back to take advantage of the powerful Double Attack + Overwhelm combo. The shell is very close to its original days, but now has access to the everpresent Byrd which adds some extra high roll potential.

Once again, there aren’t a lot of changes here. What separates this deck is its newfound place in the current meta. While it’s still early to know for certain, Papercraft Renekton appears to have a favorable matchup into a lot of the top dogs of the field. A few players have even piloted the deck to the front page of Masters. That’s pretty impressive given its brief appearance.

The deck does powerful things, and leaves a lot of room to outplay the opponent. I wouldn’t be surprised to see it show up and perform well in the upcoming Seasonal Tournament. 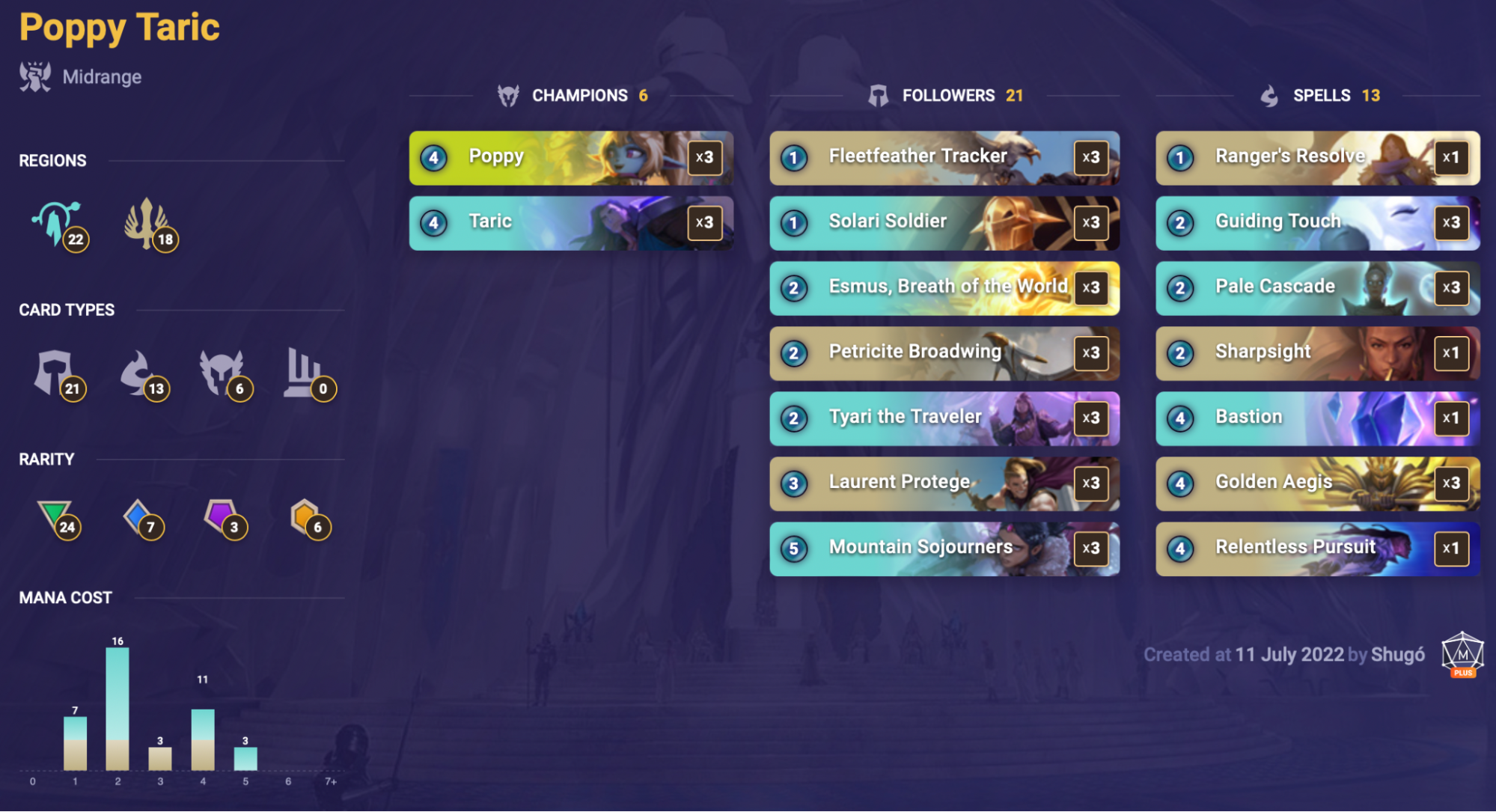 With Pantheon and Fated falling to the wayside, Poppy Taric is looking to make a comeback. Despite nerfs to Broadwing, the deck still continues to do its thing.

Poppy Taric has game into a lot of the field, and many of its bad matchups are far less prevalent than before. As it turns out, Rallys are still good. Who would’ve thought? 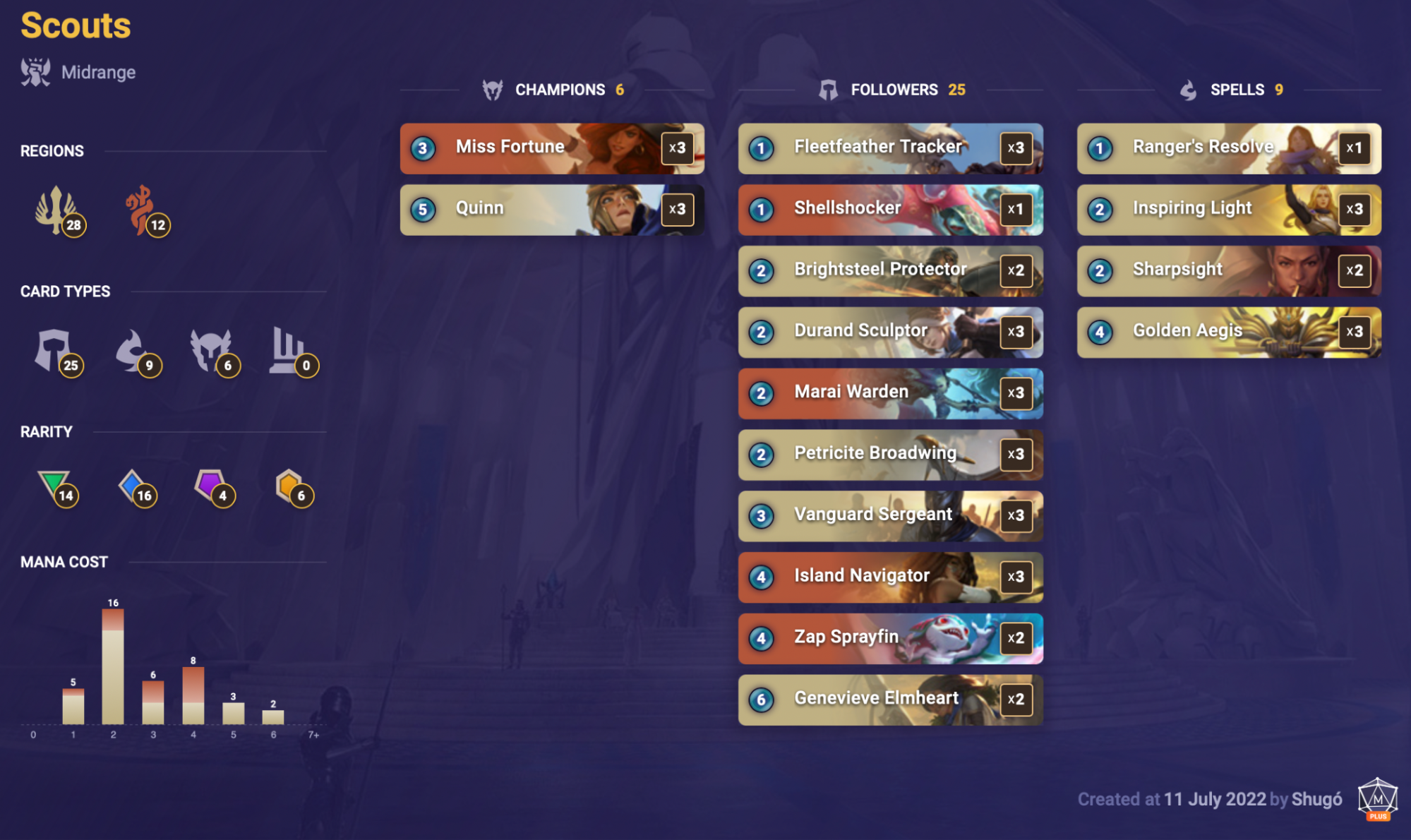 Quite possibly the most well-known flavor of Demacia…Scouts are back once again. However, this time we’re seeing a wider variant featuring Marai Warden, Zap Sprayfin, and Inspiring Light. This creates some powerful turns and gives a lot of value for such a small cost.

Once again, the deck showcases that nerfs won’t keep Demacia down. There’s no denying Brightsteel is significantly weaker, but when the goal is to simply swarm as wide as possible, it still does a decent job.

Similar to Poppy Taric, Scouts just has a solid matchup spread across the board. There’s very few awful matchups, so if you’re well experienced with the deck, you’ve got a shot against anything! 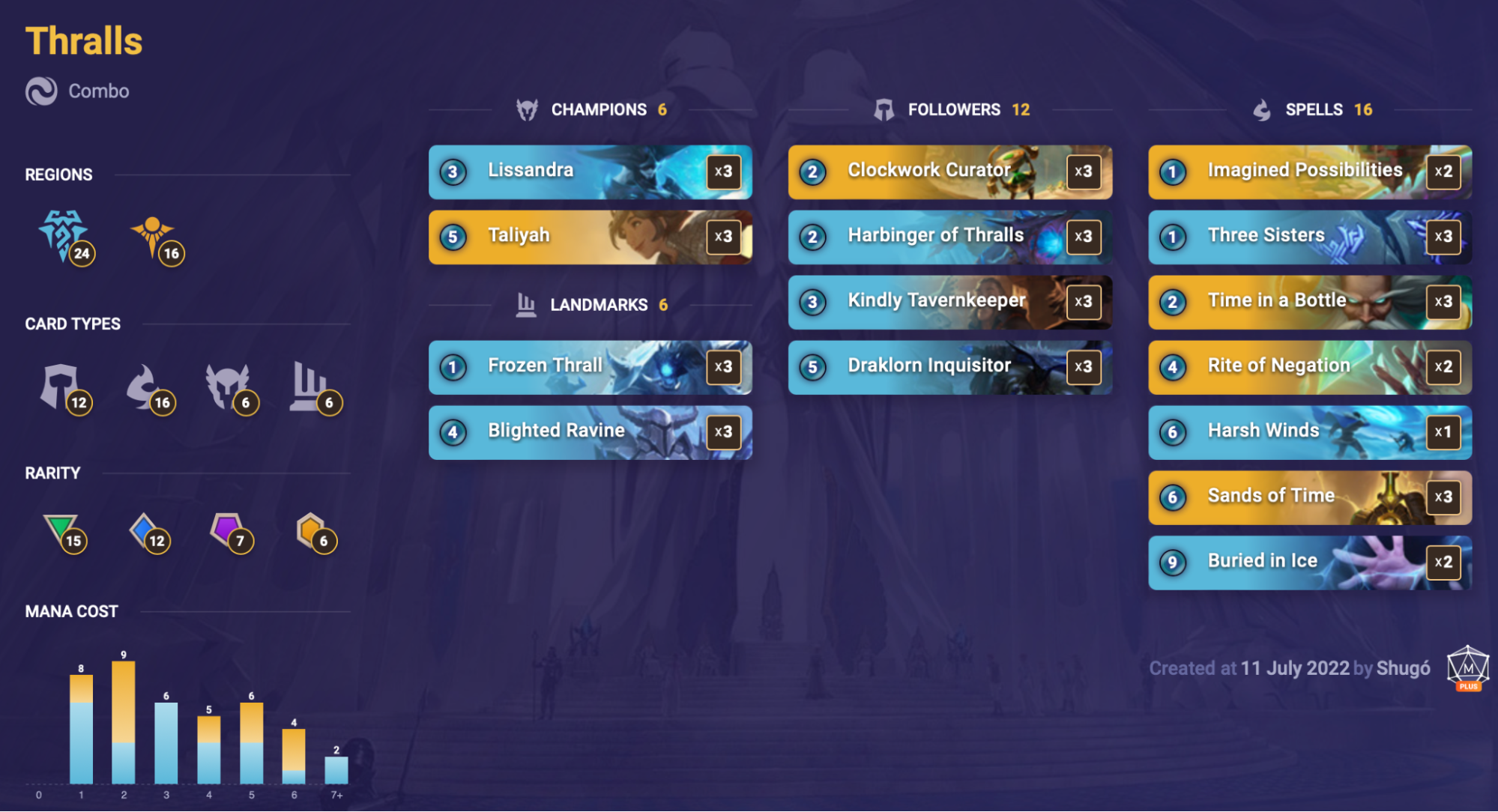 Make no mistake. Thralls got massively nerfed. The hit to Sands of Time and Promising Future are a big deal, and really slow down the insanely fast clock Thralls previously had. The deck was outright busted in the hands of a skilled pilot, and I’d argue strongly that pre-nerfed Thralls had no bad matchups. And now? The deck’s still really good!

We may not be able to do the crazy fast Promising Future setups anymore, but players have adapted, and now the focus is on Draklorn Inquisitor. We already saw some lists run it previously, so it’s no surprise the post-nerf version would include it.

After the patch, Thralls is still very well positioned in the meta. It competes well against the likes of Aphelios PnZ and Nami TF, which were the two clear patch winners. Plus, all the other top decks also got hit.

That wraps up this little snapshot of Patch 3.10. If you’re struggling to climb or simply looking for something new, I hope this helps give you some direction!

It’s okay to take a step back from time to time. If we’re too close, we could miss the new path forward.