This last week was one of the craziest ones I’ve had in a while.

There were ups and downs and all arounds and I’m here to bring you the story of it all.

My name is Jordan “WhatAmI” Abronson and I’m here to talk about the leadup, the decks, and the aftermath of the world qualification tournament on the Americas side.

The patch that we were going to be playing on for worlds dropped approximately a week and a half before the tournament itself.

This turned the traditional mad scramble of different folks and testing groups attempting to find good lineups and break the format into an absolute whirlwind of desperate activity.

Powerful newcomers to the format in Sion/Draven, Nami/Zoe, Bandle Tree, Darkness, and a plethora of Poppy decks all jumped up to try to compete with the old favorites.

Standing on the other side were Sivir, Lee, Azirelia, Plunder, Draven/Ezreal, Thralls, and many others.

Right out of the gates it looked like the new format was going to be a huge fight between decks learning how to utilize their new tools and the old decks understanding how to dodge them.

While there were definitely some success stories, Sion, in particular, shining against the old midrange decks, it looked like Sivir was still going to come out on top.

We had 126 new cards, but they couldn’t hold back the memes. Everything we were trying was either intentionally teched against it, or turning into another gift for Renekton.

And worse, Renekton didn’t even bother showing up to claim his gifts, he just kept letting Akshan and Sivir collect them for him.

It looked like even with all the cool new decks the three-deck-meta was going to look the same as the last one.

Ban Sivir, target Sivir, or possibly even both. That’s how powerful the Shurima package was feeling.

And then five days before the tournament itself, the fire nation- I mean, the patch happened.

That’s right, we were given a surprising gift from our benevolent overlords at Riot games and this one was decidedly not for Renekton.

Instead, two of the most powerful decks in the metagame that everyone was building around were hit hard with the mighty nerf bat, and all descended into chaos.

(1/5) With Worlds around the corner, we’re releasing a hotfix targeting some of the most dominant decks disrupting the meta that have persisted through the release of Beyond the Bandlewood. These updates aim to encourage deck diversity and address a high-impact bug fix.

I will admit that chaos is often where I thrive though, defining myself more than anything else in Runeterra as a brewer and a deck builder.

So while there were many screams of anguish echoing around I was quietly pretty happy about the small amount of time that we had to get ready for the most important Runeterra tournament ever.

This is the moment I will take out to throw big props to my main testing team over at Mastering Runeterra.

Catch all the action at our watch party on @JasonFleurant stream at https://t.co/SZ0ff0Akfa

We spent countless hours talking, scrimming, teching, starting over, and generally trying to figure out this crazy new format in the small amount of time we had.

I one hundred percent could not have gotten here without you guys.
All of that testing culminated in a relatively simple lineup with some pretty spicy techs that definitely carried the day.

Some of these were even added in during a last-minute morning of preparation session so you can tell that we used every minute we were given.

This deck is an extremely powerful take on the standard Demacian ideal of “Put things on the board and hit your opponent with them till they fall over.” 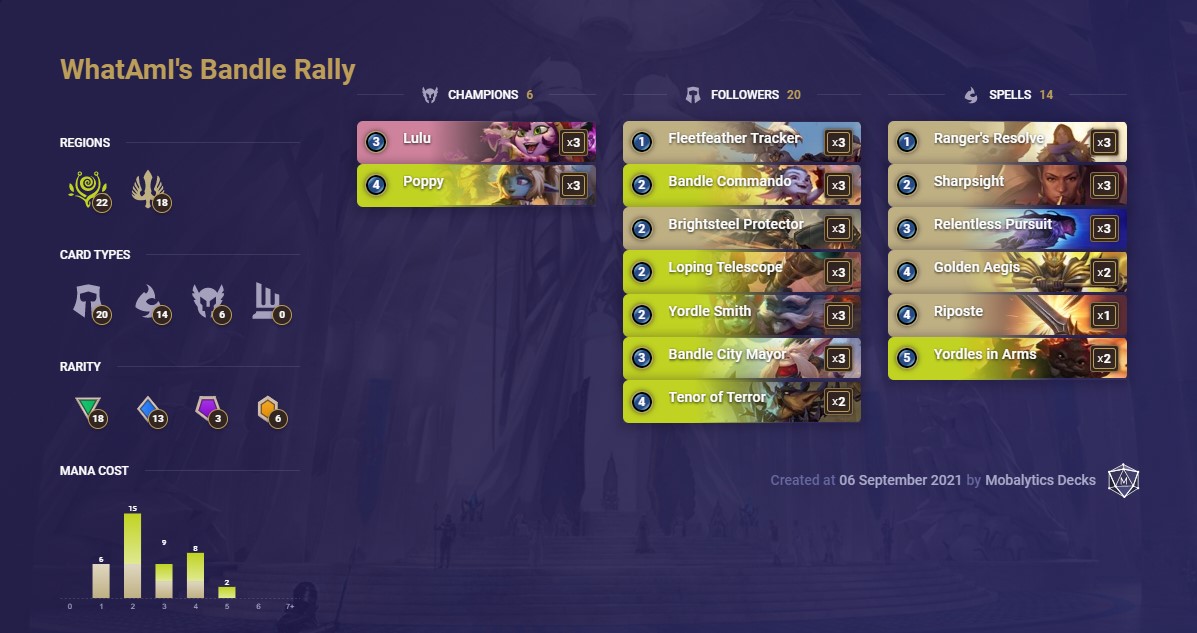 Your base game plan involves board swarm and dominance with either of your champions, but it’s the multiple backup plans that give this deck its spice.

The first and most obvious is Yordles in Arms.

Giving a full board +4/+4 can often win games on its own if you have enough tempo advantage.

Doing it and then rallying in the same turn is something that will often reduce a clogged board state and a twenty health nexus to nothing in a single turn.

In testing, I won a game by surprise Judgementing an opponent’s board. These manifesters are not to be underestimated. 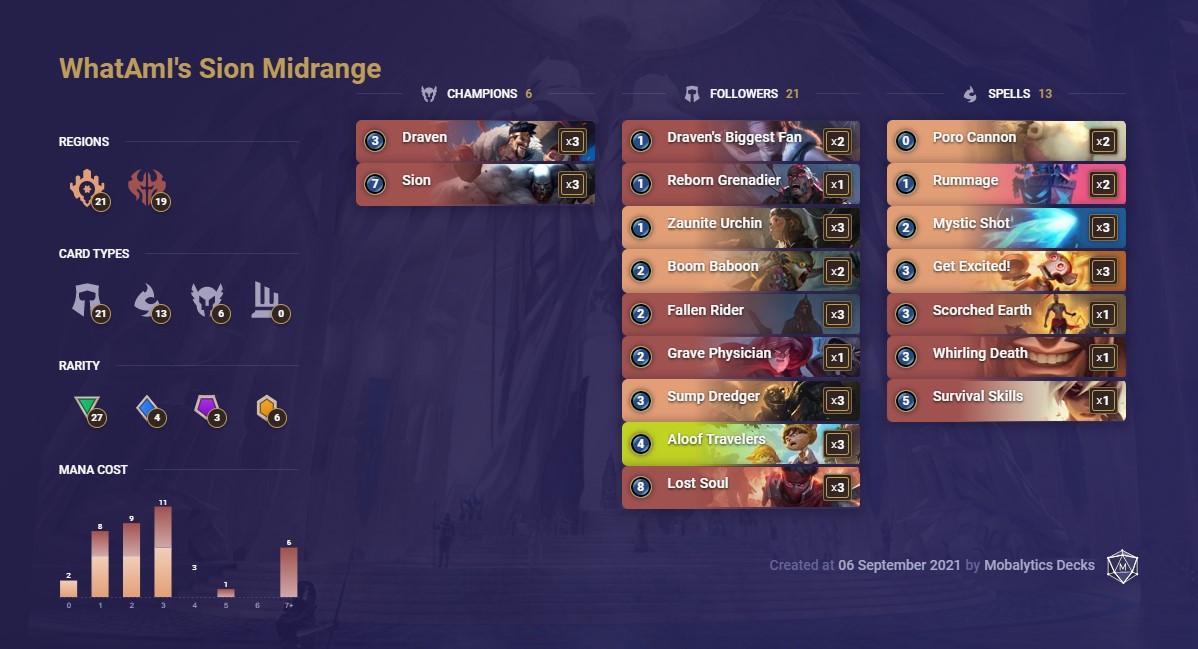 Many of the early drops were trimmed down in favor of an impressive suite of control spells.

Whirling death showed its might early as a powerful way to level Draven, Kill opposing Sions, and generally wreak havoc.

Scorched Earth was a last minute inclusion for dealing with pesky Thralls, Bandle Trees, or simply targeting your own Sion for a kill.

All of those techs as well as the full suite of burn spells teemed up with Aloof Travelers and Lost Soul to make what people expected to be a deck you could counter simply by answering Sion a problem of a whole different magnitude.

I’ll tell you this, there are few better feelings in Runeterra than Aloof-ing your opponent’s Minimorph the turn before Sion comes down.

Whether they emote you or not you can feel the look on their face as Sion bears down on them all the way through both screens.

This is probably the most standard of the three decks I brought. The plan of this deck is very one-dimensional, but it protects it well and can achieve it with a reasonable modicum of consistency. 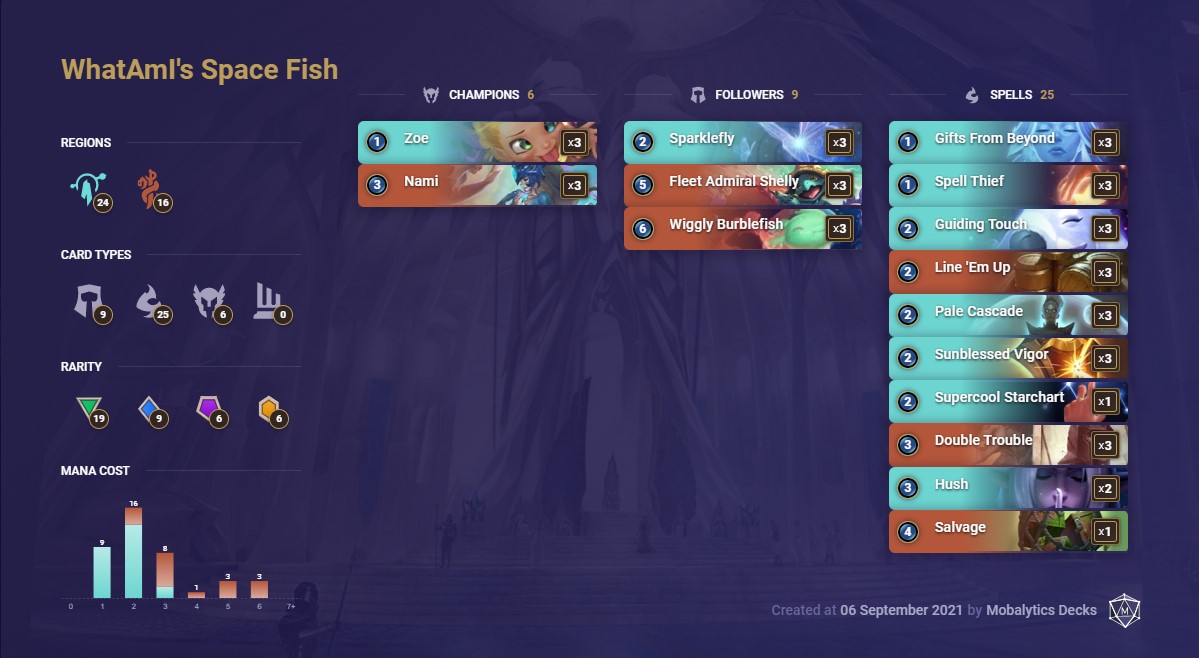 Step one is to make big Elusive units. There is no step two, you did it, good job, you win.

The small tech choices were very important though even here. The one of Starchart being able to find key stuns versus rally decks and the Salvage digging just those few extra cards after a Nami or Shelly both came in extremely clutch.

Admittedly I needed some level of convincing to actually get on this deck in the first place and I appreciate my team beating me over the head with how powerful it was until I listened.

One of the most important life lessons I have learned is to do my best to never be the smartest person in the room.

And if you are creating rooms with people who are intelligent and worthy of respect then sometimes the thing to do is shut up and listen to them.

This deck is a product of me doing just that and it served me extremely well in the qualifier.

Unfortunately, I was not recording at the time and so I can’t take you through the punch-by-punch replay, but I’ll see what I can do about taking notes for these in the future if folks are interested in that sort of thing.

Let me know in the comments below.

There was definitely an awful lot of drama on the day, that I’m sure people are expecting me to comment on, but I’m going to leave that particular smoking gun to the Twitter-verse to take care of.

I don’t know that writing further on it here will do much good and I’m not a fan of beating dead equines.

For me, for now, I am as hyped as I have ever been to be qualified to represent the Americas shard on the world stage.

You’d better believe that I will be testing and brewing just as hard if not harder than I was for the next two weeks to give myself every advantage I can find.

Wish me luck y’all, and as always I’ll see you out there on the ladder.