Exploring How to Make Expedition Choices in LoR

Forget about Ranked because we’re about to embark on a whole new adventure. That’s right, we’re talking about Expeditions!

Making do with what you’re given can be a challenge.

We’ve got lots of decisions to make before we even begin our first match.

So this time I’m gonna dive right into an actual Expedition and walk you through my thought process for each pick! 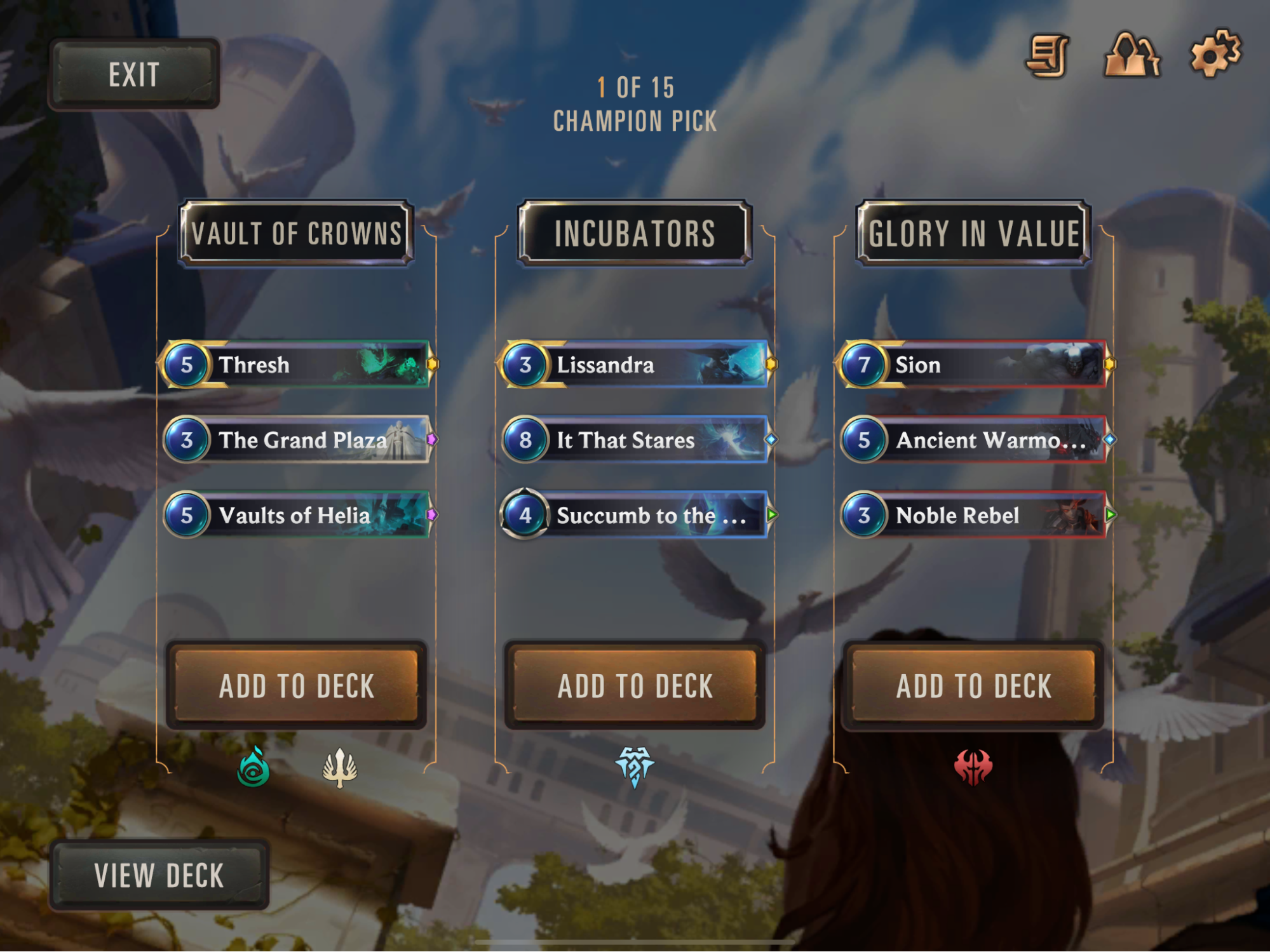 Alright so first up we have the choice between three champion packages; Thresh, Lissandra, and Sion. It’s important to note which region combinations they fall under, as they are listed under their draft bundles of Vault of Crowns, Incubators, and Glory in Value.

When it comes to building a reliable Expedition deck, we often want to aim for cards with a consistent baseline value. This means prioritizing bundles of cards that are self-sufficient on their own. While there is merit to having strong synergy, it comes at the risk of whether you can find such pieces throughout the draft.

With all that said, Sion looks like the safest choice. Ancient Warmonger and Noble Rebel are completely acceptable on their own and can become even stronger if we find discard synergy. Thresh’s landmarks could be a liability if we don’t find proper support. Lissandra herself is very combo-oriented and her package doesn’t help. Sion, it is. 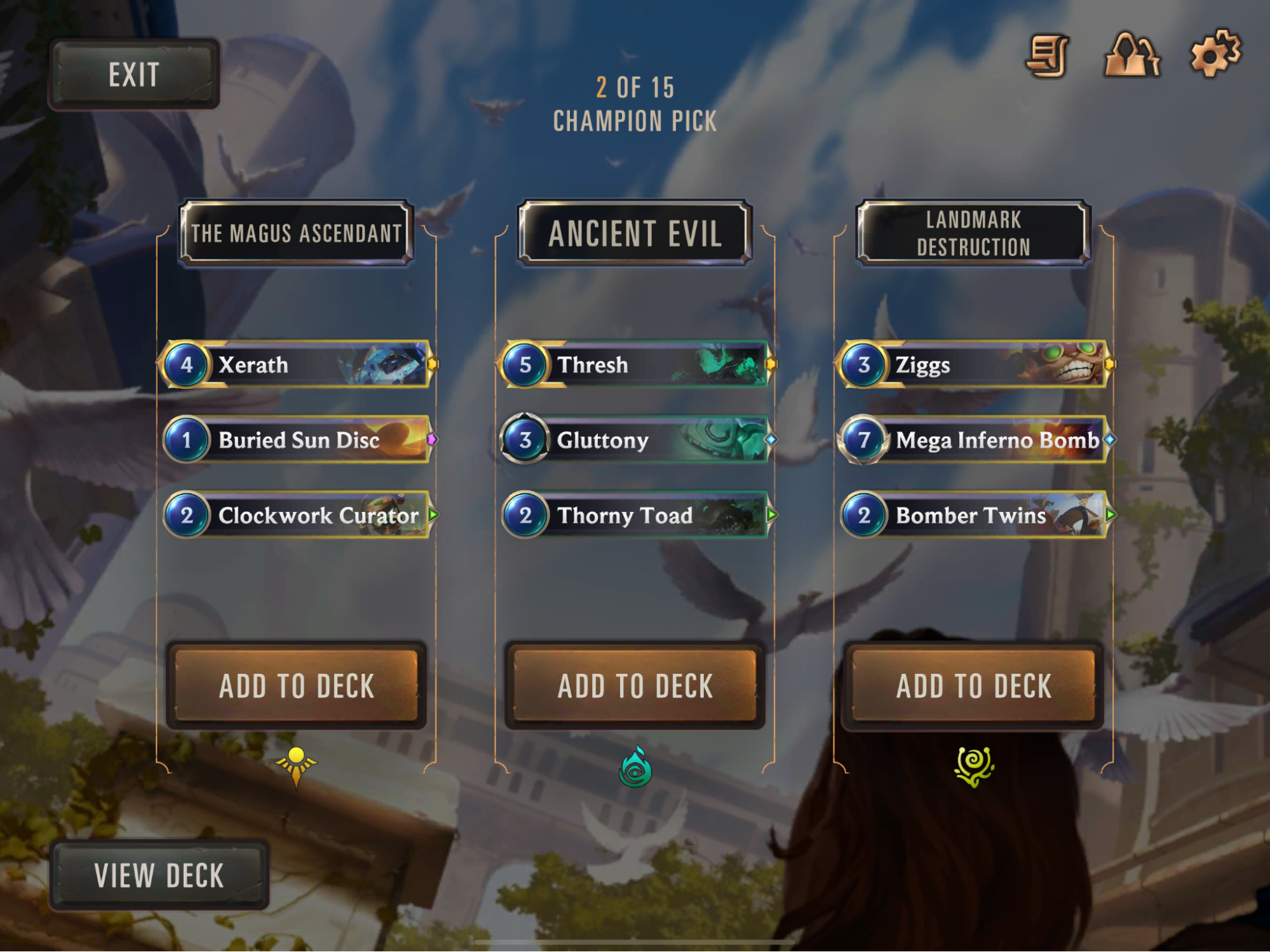 Yikes! Not exactly what we’d call an ideal start. But alas, this is the reality of building a limited deck. Xerath is an immediate red flag. As awesome as Buried Sun Disc is, it has no place outside of Mono Shurima and that ain’t happening. This Thresh package is equally awkward as the previous one. Thorny Toad wants Deep support while Gluttony is far too situational.

Just remember, when all else fails, go for the stats. Ziggs and Bomber Twins are slightly above par for the curve even without other landmarks. Mega Inferno Bomb isn’t ideal, but 2|3 is as good it gets so hopefully we can trade it out later! 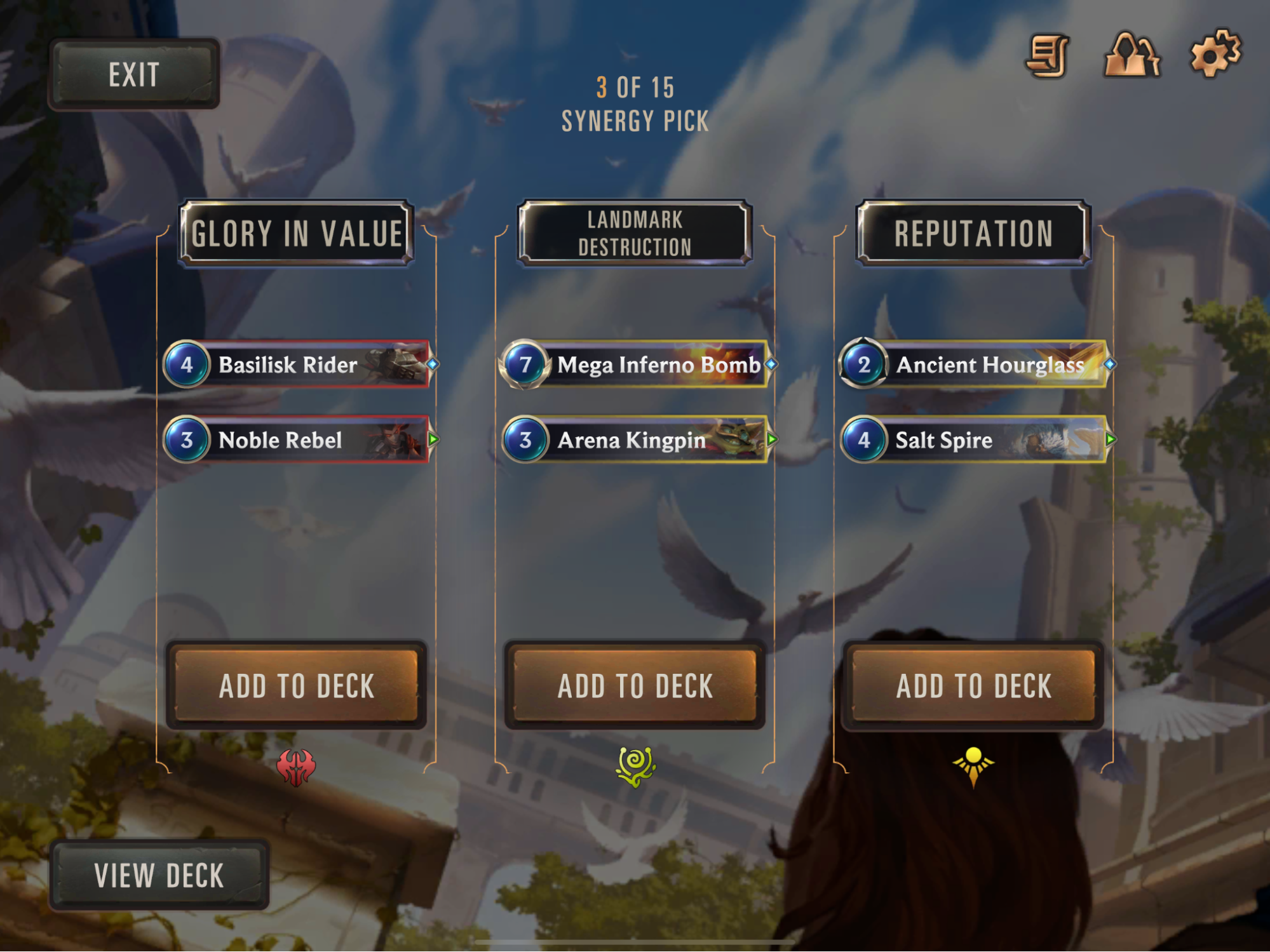 Allegiance cards are interesting in Expeditions. When you find them early enough, it’s possible to draft accordingly to make them extremely reliable. Basilisk Rider is quite good when it goes off and still passable otherwise. It’s also alongside a second Noble Rebel and in the same bundle type as our Sion pick.

Again, not an amazing option for us but we don’t want Slow landmarks or a second Mega Inferno Bomb. We’ll take the Basilisk but won’t commit to the Allegiance plan unless our future picks shape around it. 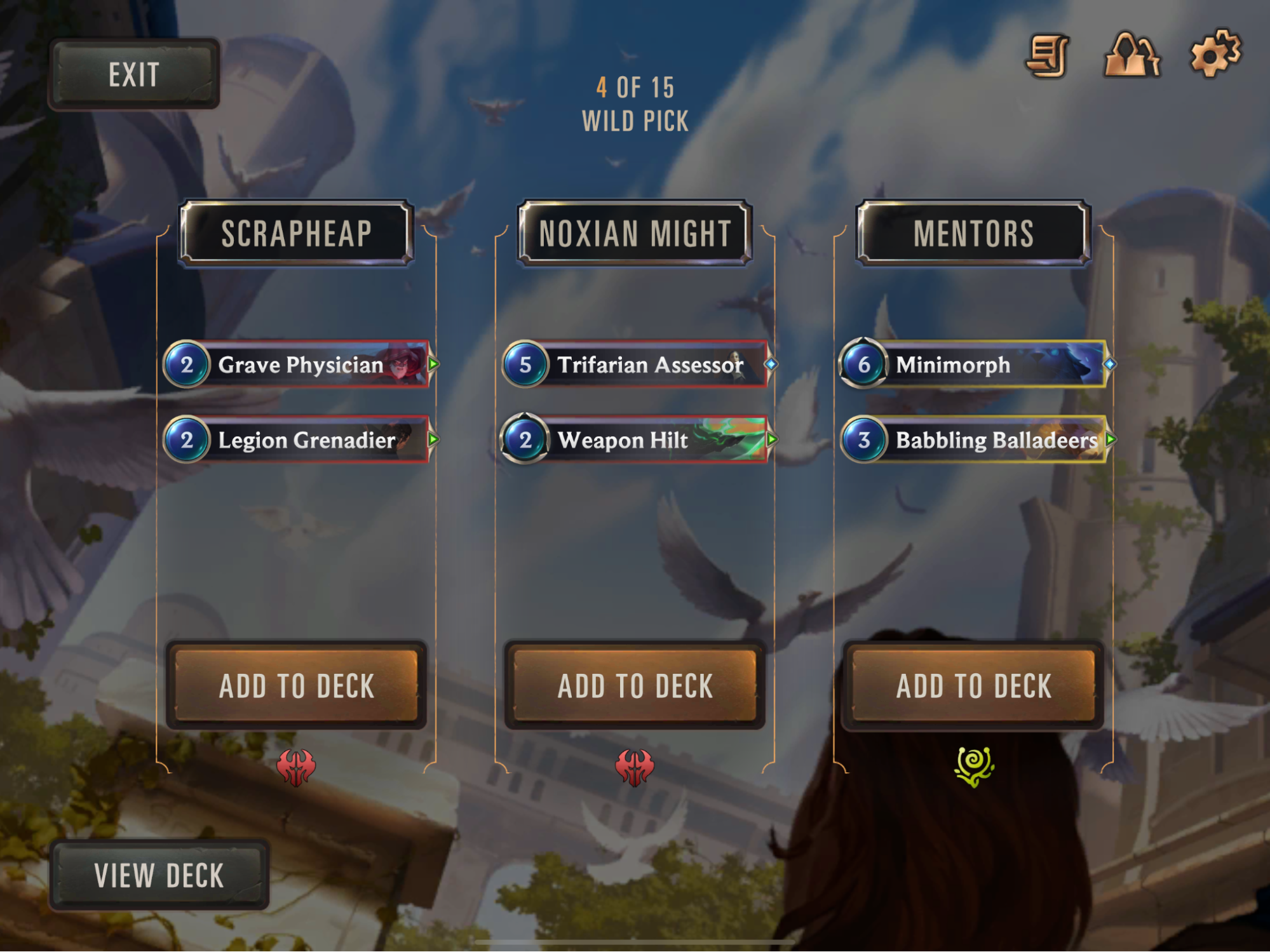 Alright! Finally a decent package with a few synergy points! The pair of Grave Physician and Legion Grenadier is an obvious choice. Both cards are solid on their own, plus we need more 2-drops. Our alternatives aren’t half bad, but the mana curve is important to prioritize when you can. 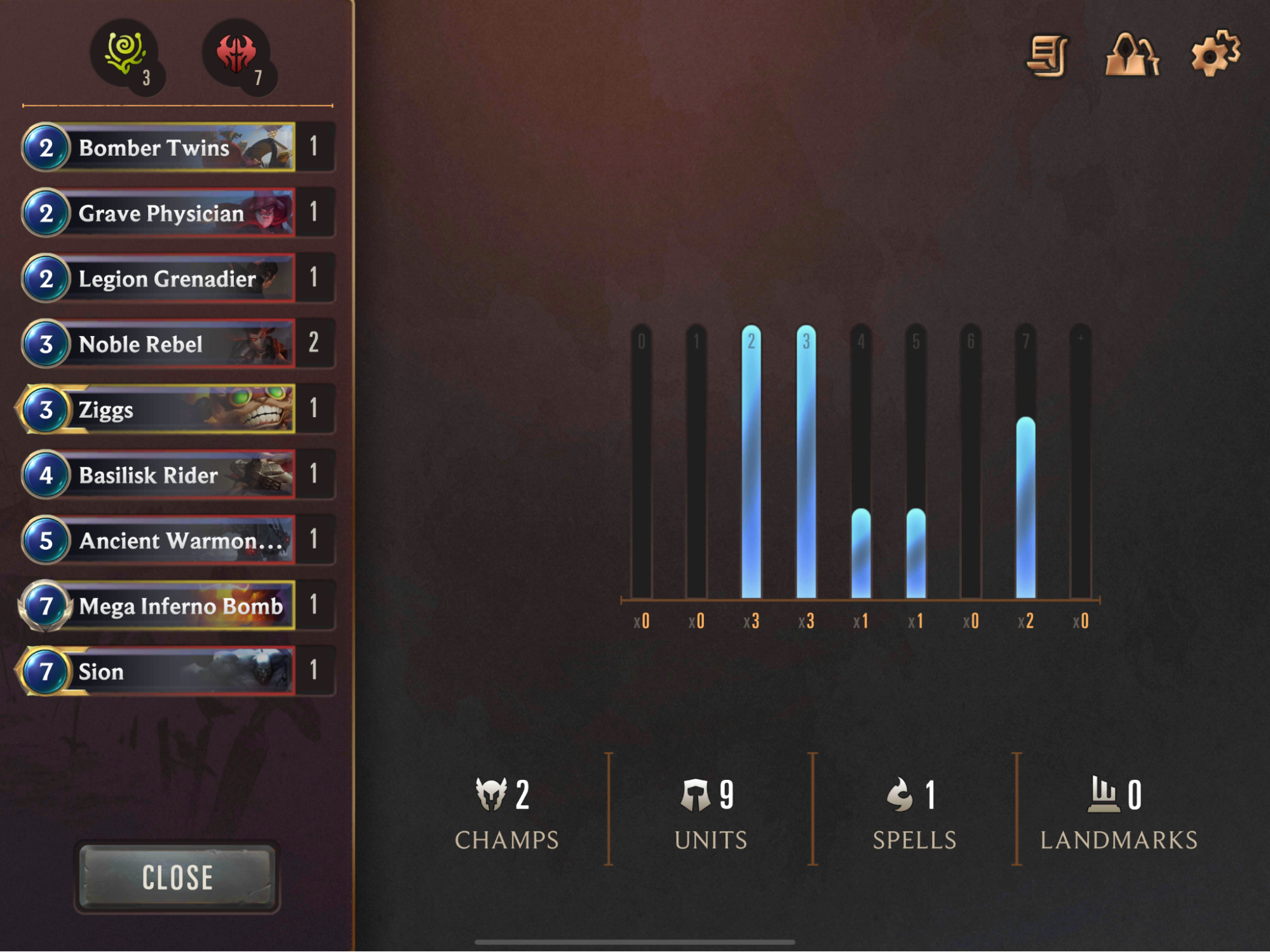 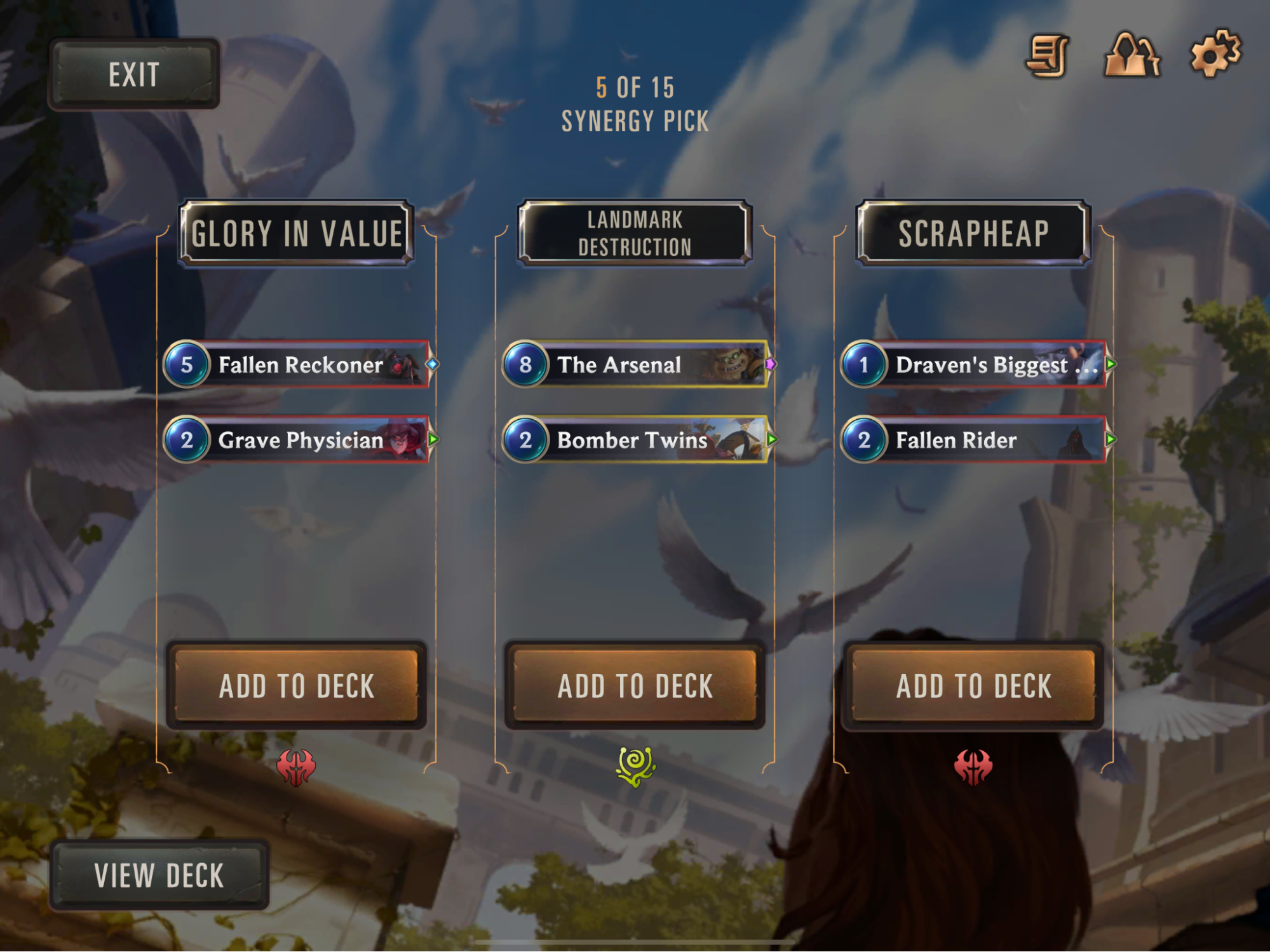 This time we’ve got more options to consider. Fallen Reckoner and Grave Physician are solid, but before picking up more discard, it’s important to find discard-fodder. Aside from a bad generated landmark (from Bomber Twins) or the Mega Inferno Bomb, we don’t have anything we WANT to be discarding.

Fallen Rider is a premium pick for this archetype and is our first step to solving this issue. While we don’t have Draven, a one-mana 2|1 is still totally acceptable. 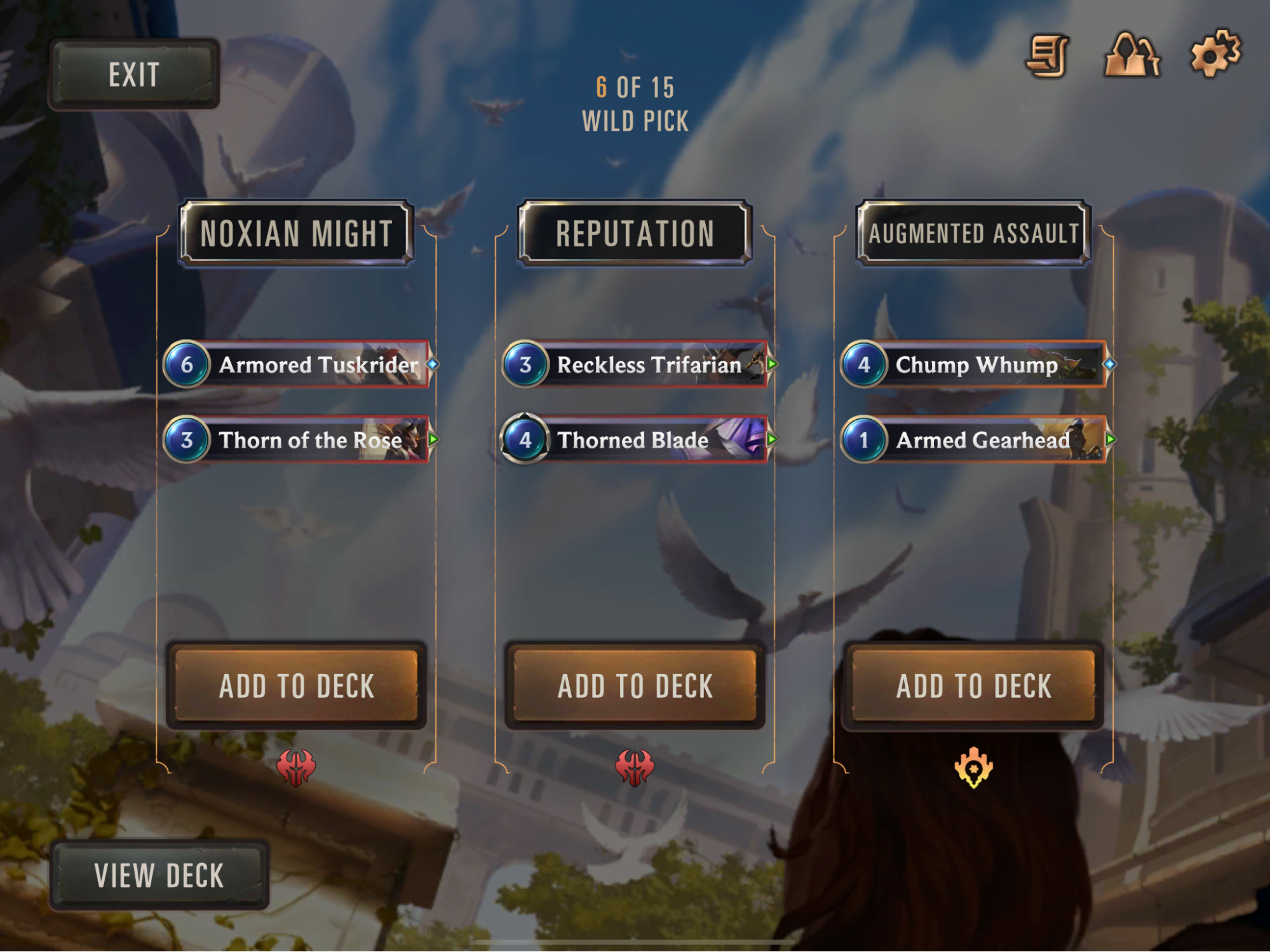 From a baseline standpoint, Chump Whump and Armed Gearhead appear to be the best deal. However, albeit random, drafting the third region tends to mess with the odds of finding more synergistic picks. This has me leaning towards the Noxus bundles. We’re pretty set on 3-drops, but either way, we’re getting another. Armored Tuskrider is a reasonable unit and fills our curve, so you may call me crazy for picking the middle.

Thorned Blade, while generally awful, has some huge potential with our list. We’re a third of the way into the draft and already have SIX units with Overwhelm. This gives us some extra reach where we can sneakily strike through for five damage. Sign me up! 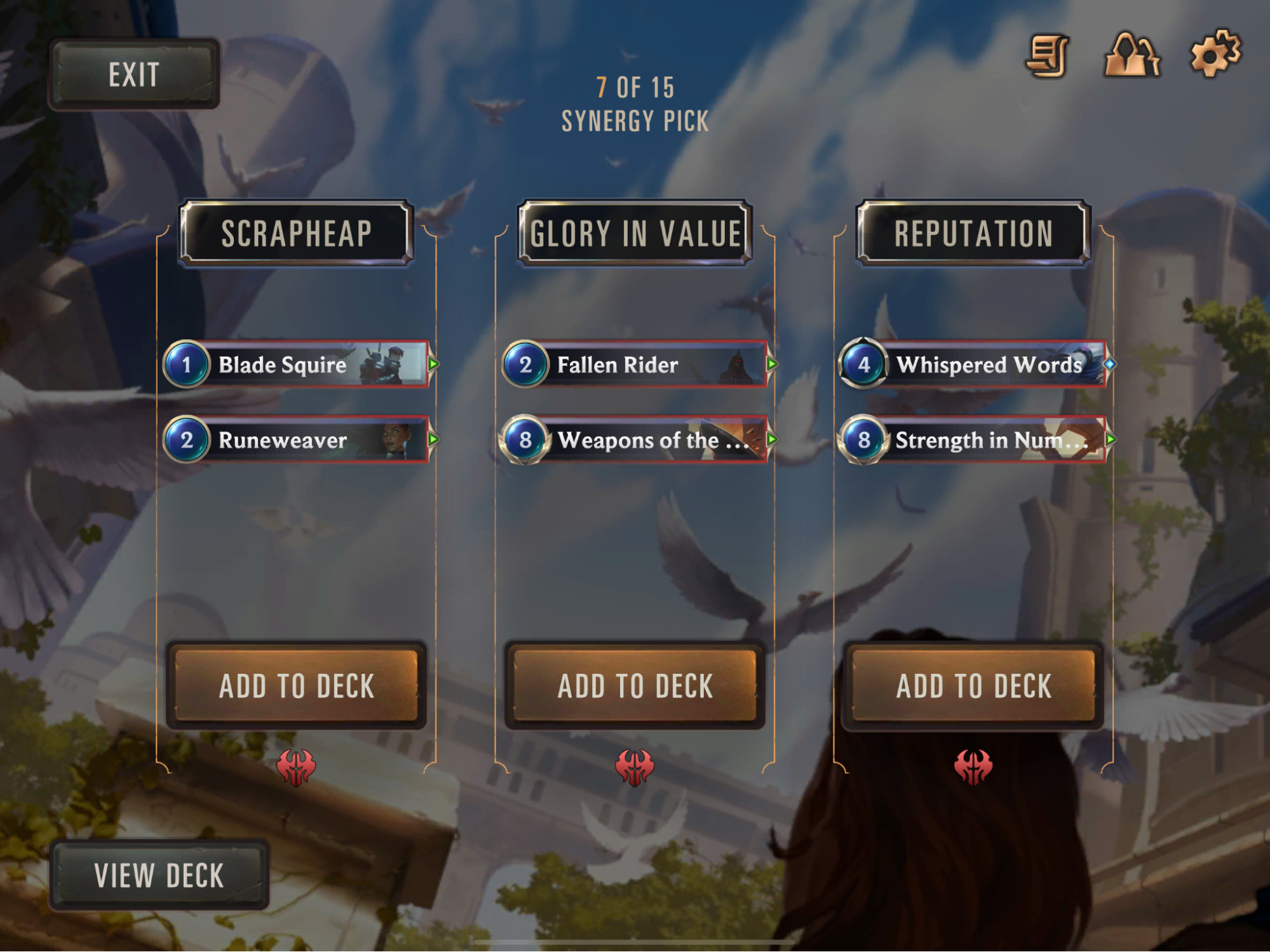 We’ve found even more solid options to support the discard archetype. Unfortunately, we haven’t picked up many cards that do the discarding. But that’s okay! Better to be heavier on fodder as it’ll give us easier decisions if we find synergy later.

I love me some Fallen Rider and Weapons of the Lost isn’t horrible. However, with our slant towards Overwhelm, I think we’re better off grabbing another 1-drop and 2-drop. Blade Fragments also double as discard fodder. Win-win! 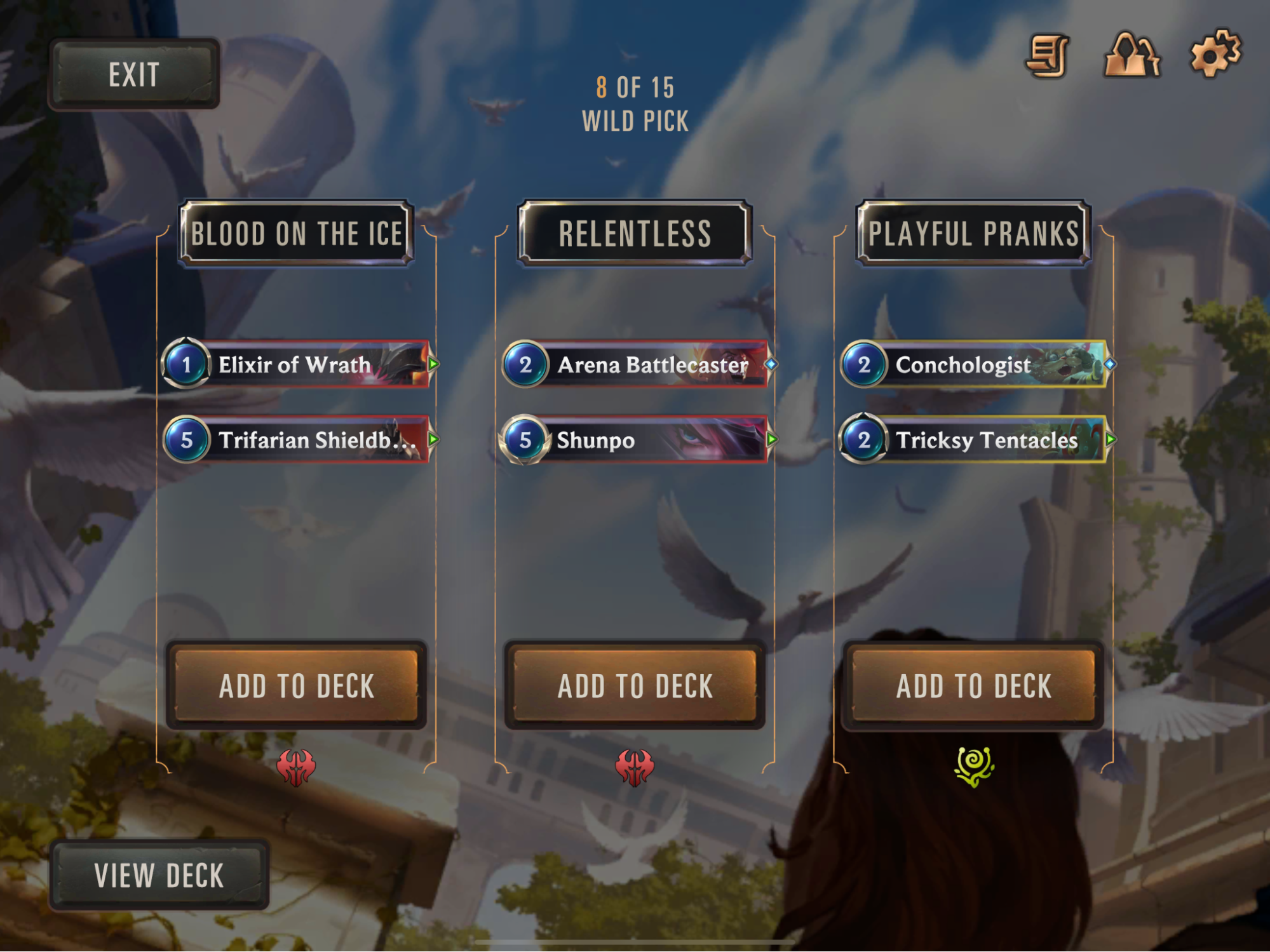 Halfway in and we’ve got a bit of an awkward one. Elixir of Wrath and Trifarian Shieldbreaker are passable but mediocre. Arena Battlecaster is a good card, but a better fit for a wider aggressive deck. Shunpo could do some crazy things but is often clunky and useless.

I absolutely LOVE Conchologist. The card is insanely valuable in almost any deck and I’d highly prioritize it over most other things. Unfortunately, it’s paired with one of the worst options; Tricksy Tentacles.

This is a tough one. I’m not completely sold on anything, and while more Bandle City cards reduce our Allegiance odds, there’s always the chance to trade some out at the end. I’ll settle for Amazing+Bad over Mediocre+Situational. 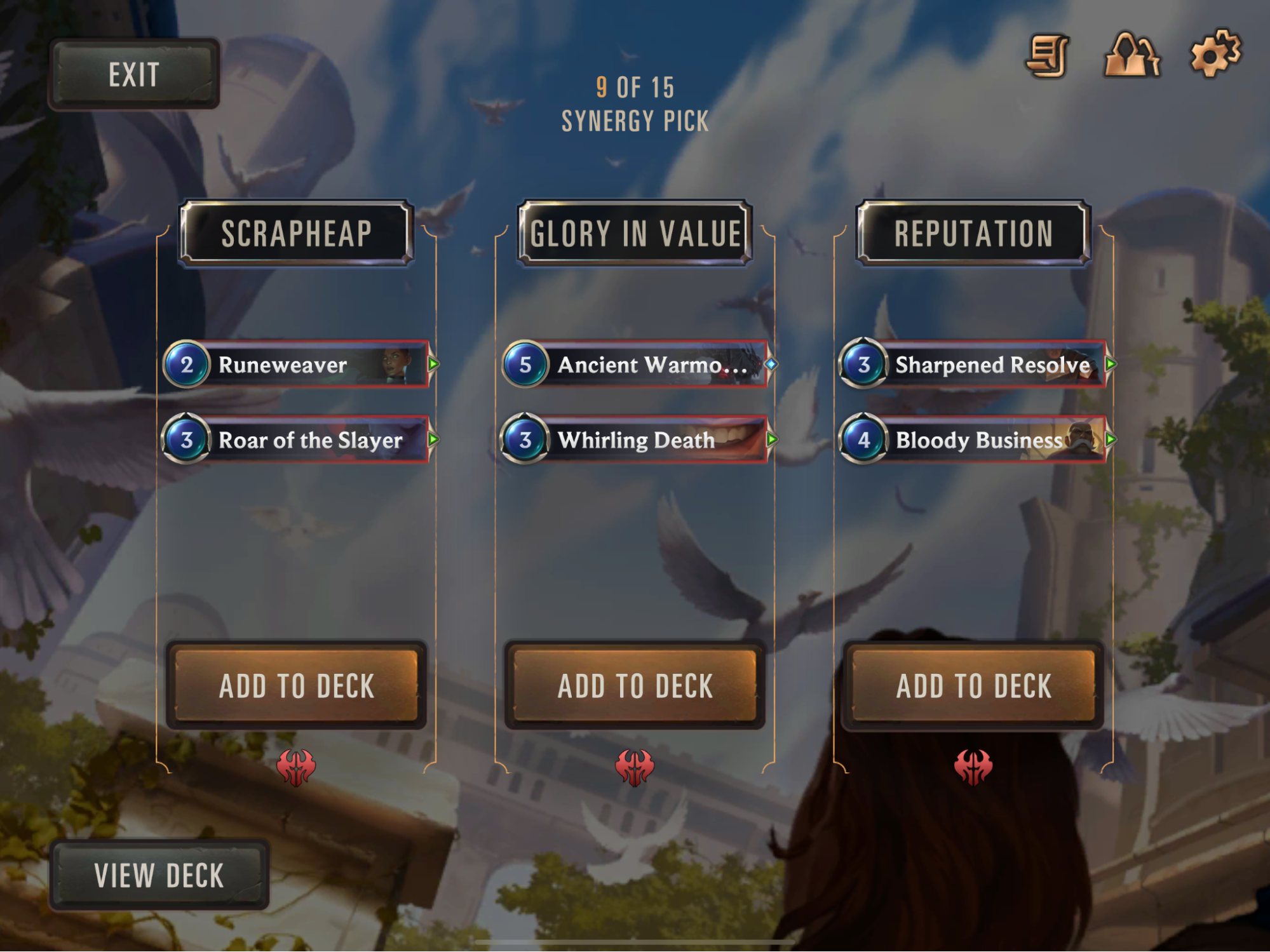 Three decent Noxus packs and all with removal. The three supporting cards (Runeweaver, Ancient Warmonger, Sharpened Resolve) are all solid, but there’s a clear winner between removal spells.

Whirling Death is a fantastic Expedition card. Most games come down to combat exchanges and Whirling Death ensures you almost always come up ahead. It also works excellently with Overwhelm to help push even more damage! Roar of the Slayer is a bit too narrow while Bloody Business needs to be played in a heavy 5+ power archetype. 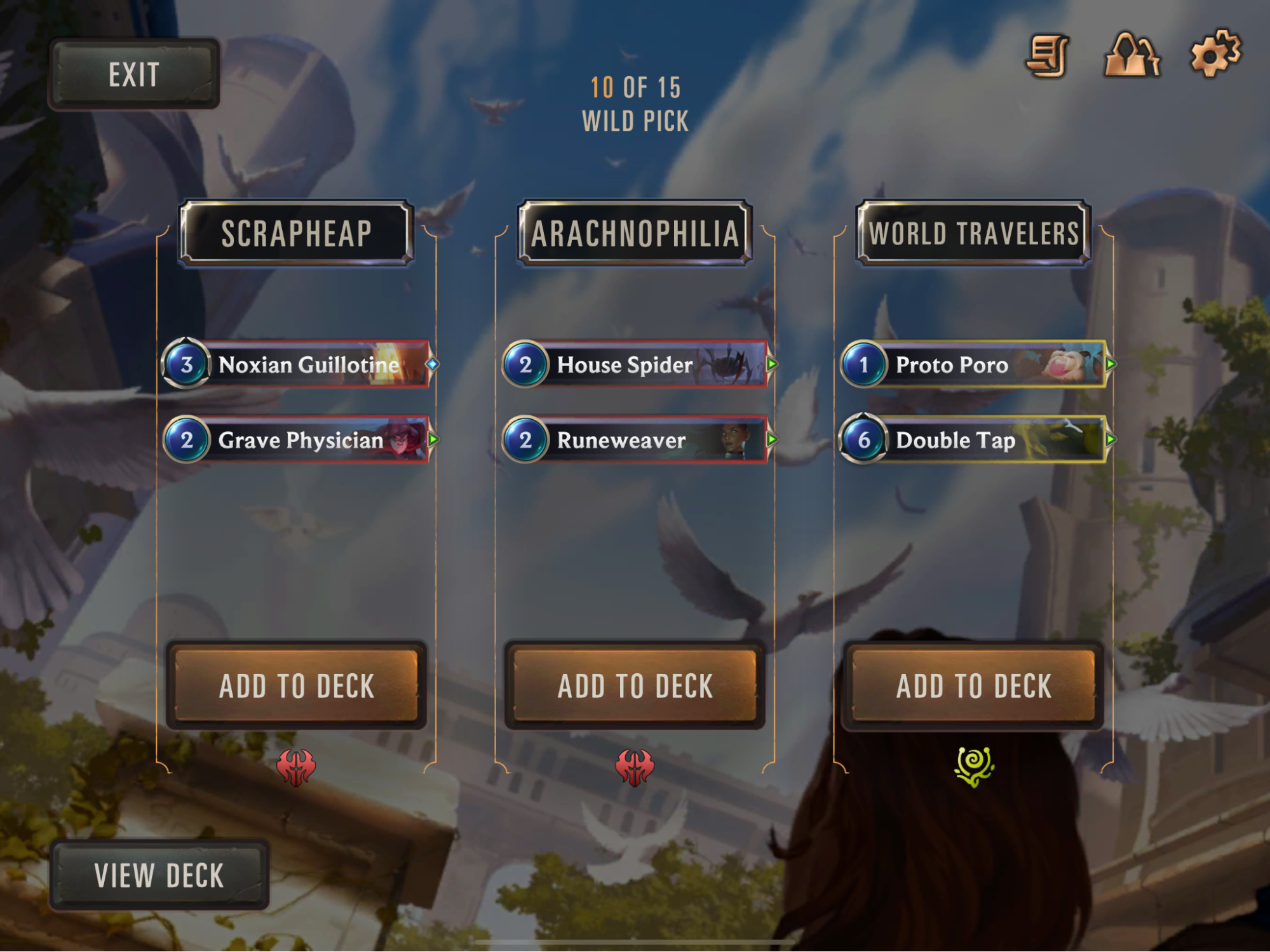 We’ve finally found some more discarders. Perfect time to grab another Grave Physician. Noxian Guillotine gives us a form of hard removal and is still passable even without a ton of pings. The 2-drops are solid but we’ve got plenty at this point. Proto Poro and Double Tap? No thank you! 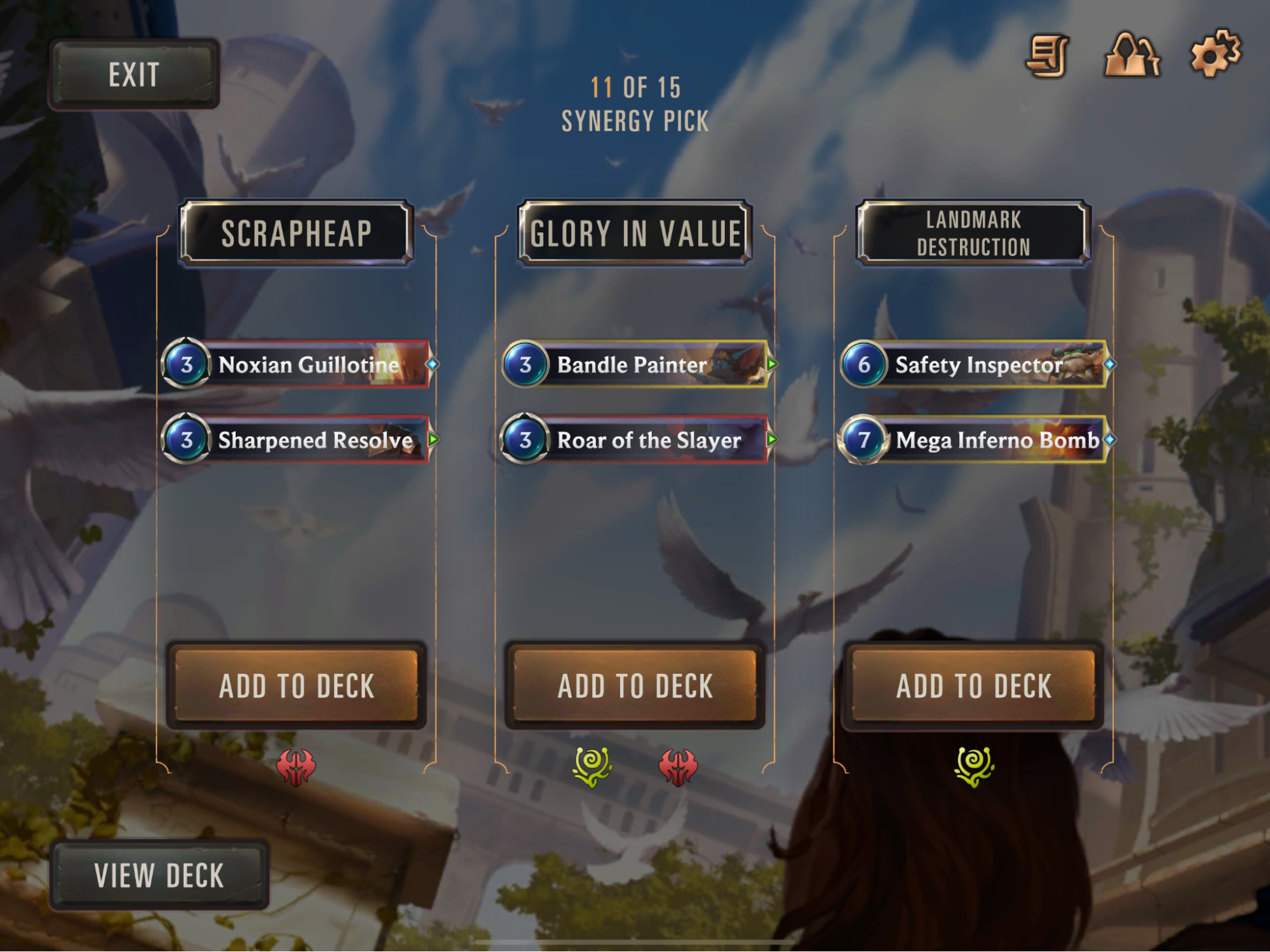 Here’s another chance to round things out. Bandle Painter is exactly what we’re looking for! Discard a card and get even more value! I’m also happy to pick up a Roar of the Slayer at this point, as it does have its moments where you can catch the opponent off guard.

We’re deep into the draft now so this is the clear choice. 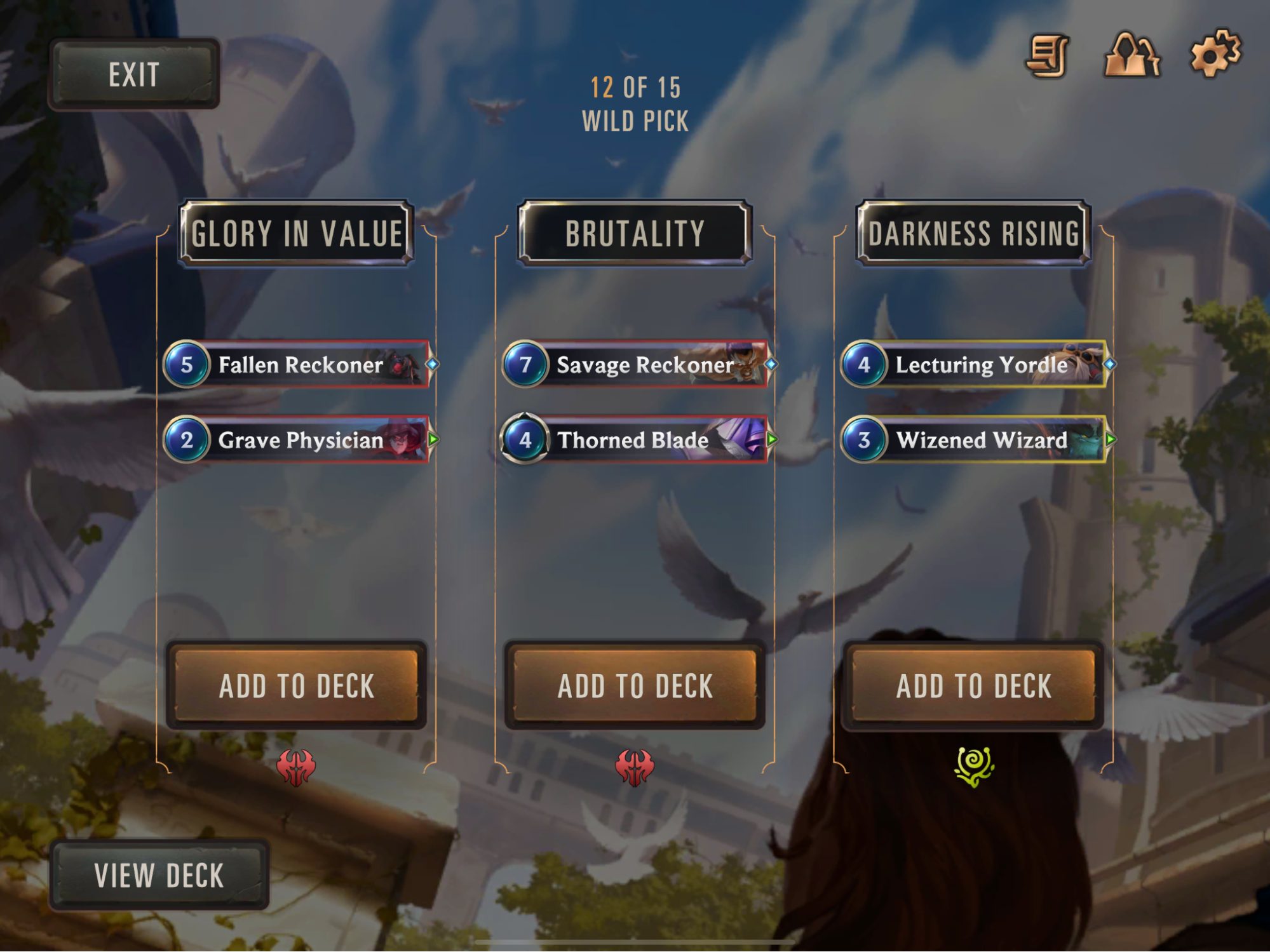 It pains me to pass up a Lecturing Yordle, but Wizened Wizard is pretty bad and we’ve got another synergy pick on our left. We passed it up earlier, but now’s a great time to grab the Fallen Reckoner and Grave Physician. 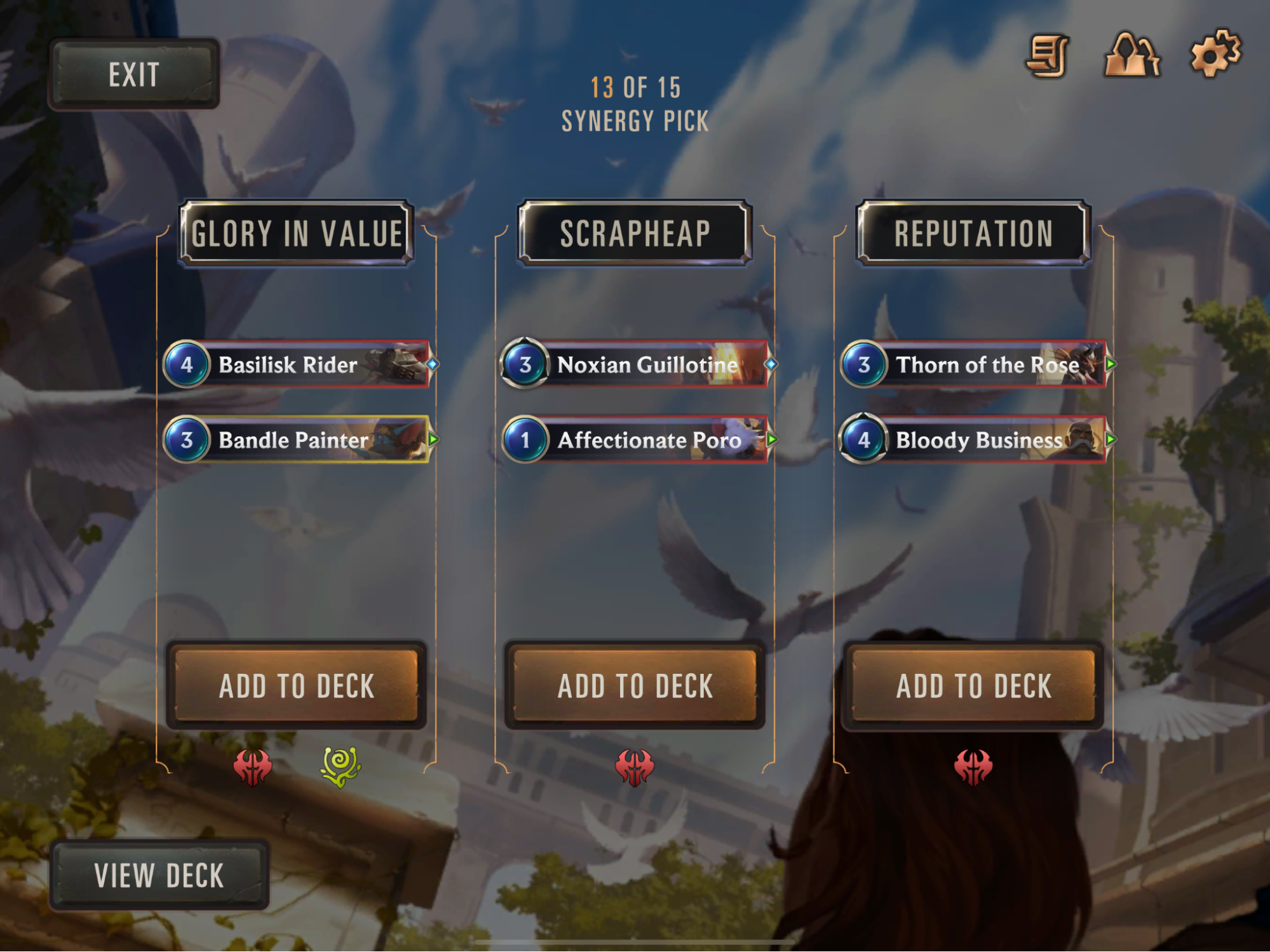 We’ve got a 6-20 split on Bandle City to Noxus ratio. While not amazing, Basilisk Rider should still hit more often than not. Plus we’ve got two easy cuts at the ready if we’re lucky enough to trade away Tricksy Tentacles and Mega Inferno Bomb.

Honestly, I was already sold on the Bandle Painter. More synergy and more value, let’s go! 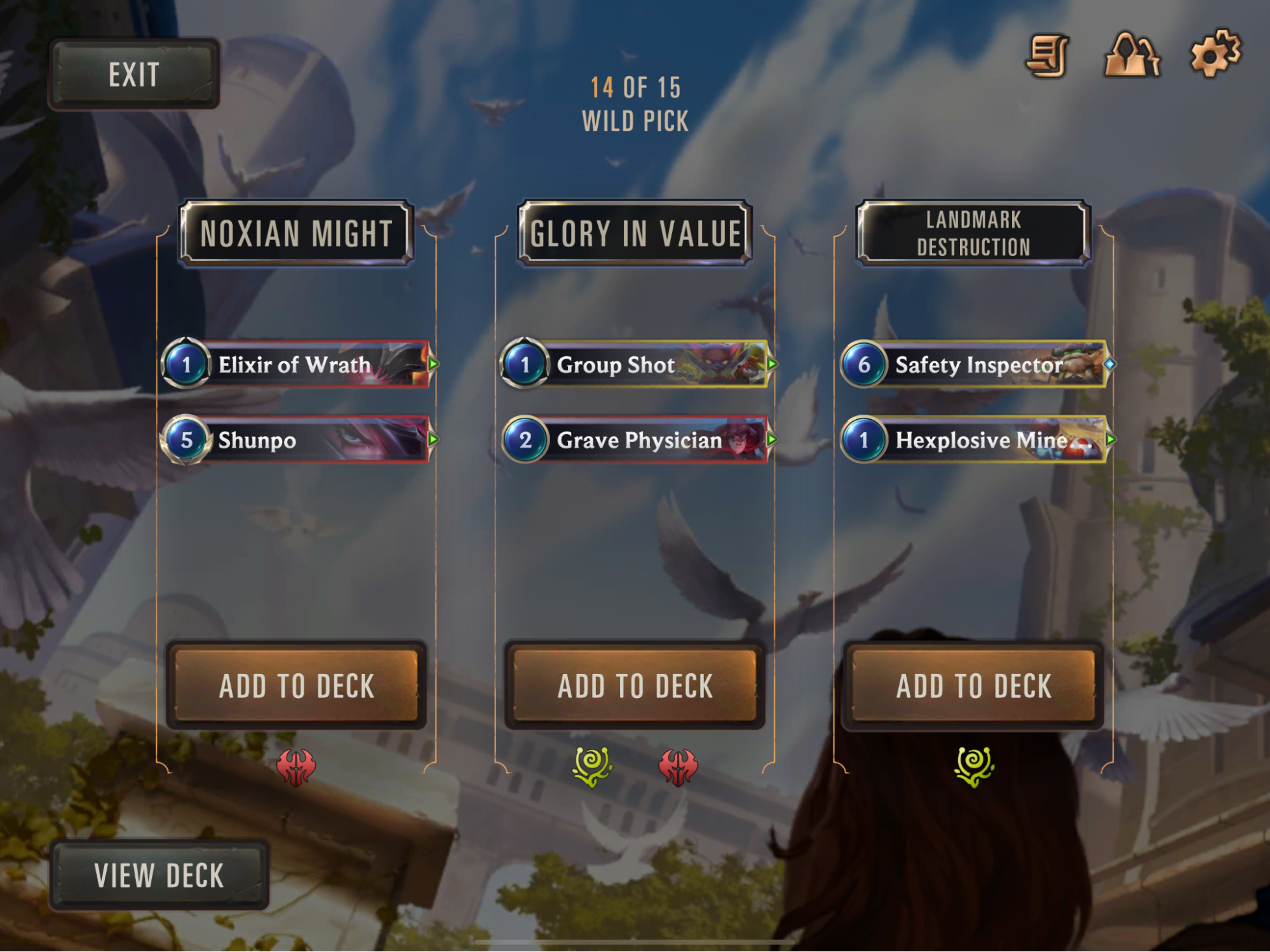 I’m not sure whether or not you can have too many Grave Physicians. My instinct tells me that’s not possible, so let’s load up with even more!

In all seriousness, you really can’t go wrong with multiples. At worst you can cycle away from a card you don’t need to hopefully find something better. Group Shot is fine too! 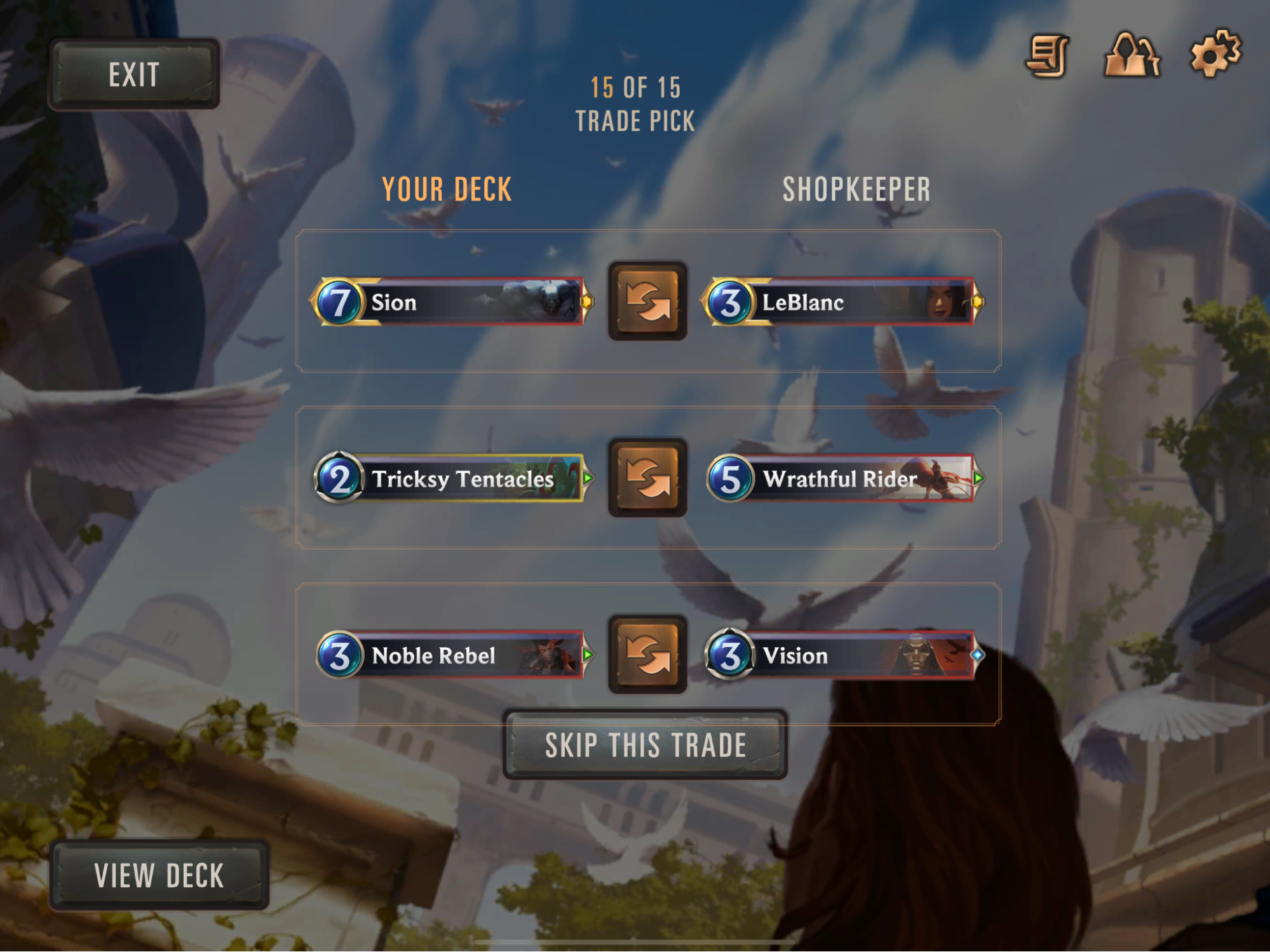 WE DID IT! Good riddance Tricksy Tentacles. While I’m not thrilled about Wrathful Rider, it’s at least a more playable card, and also in Noxus. Besides, the other trades are a joke. 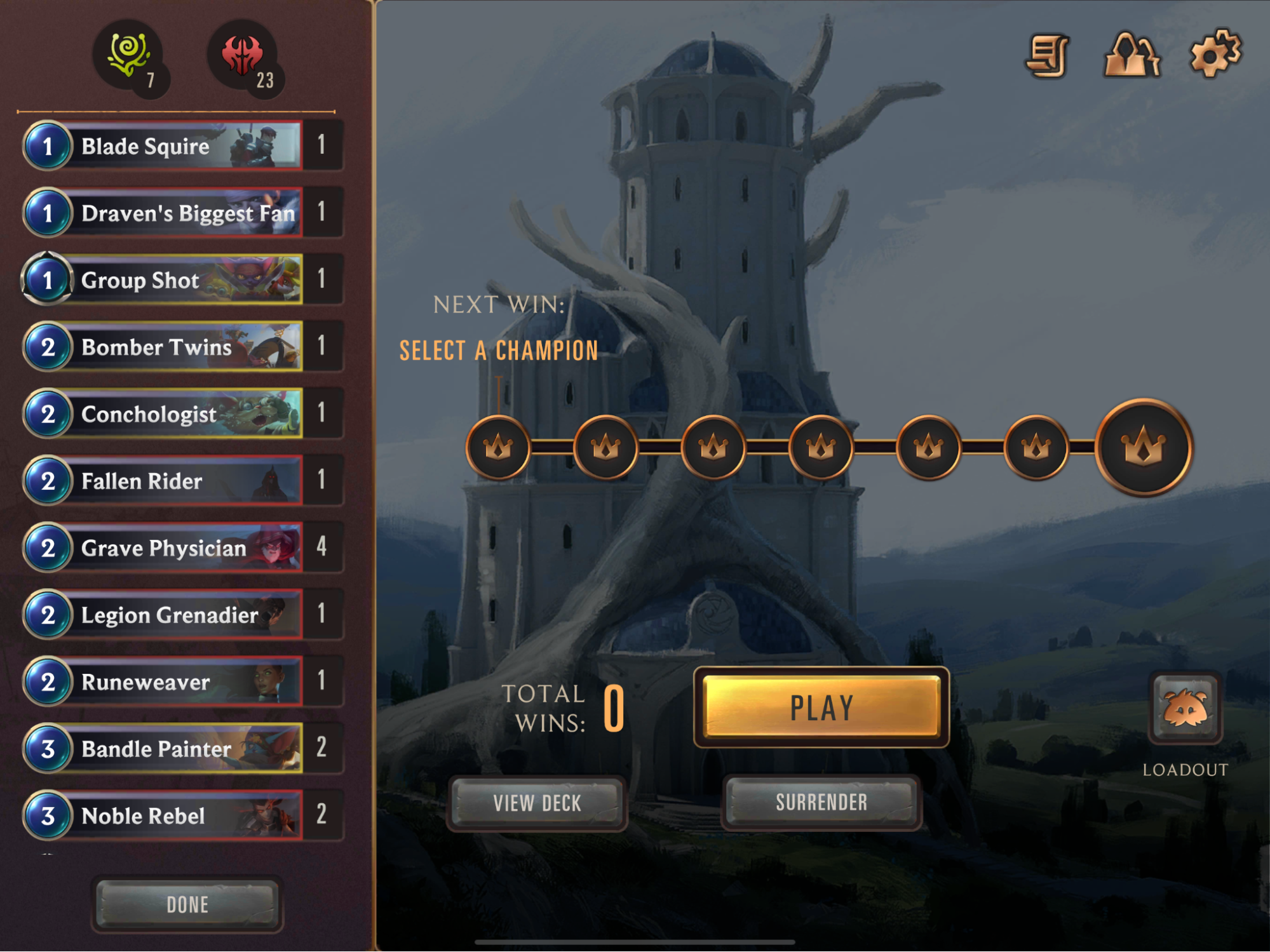 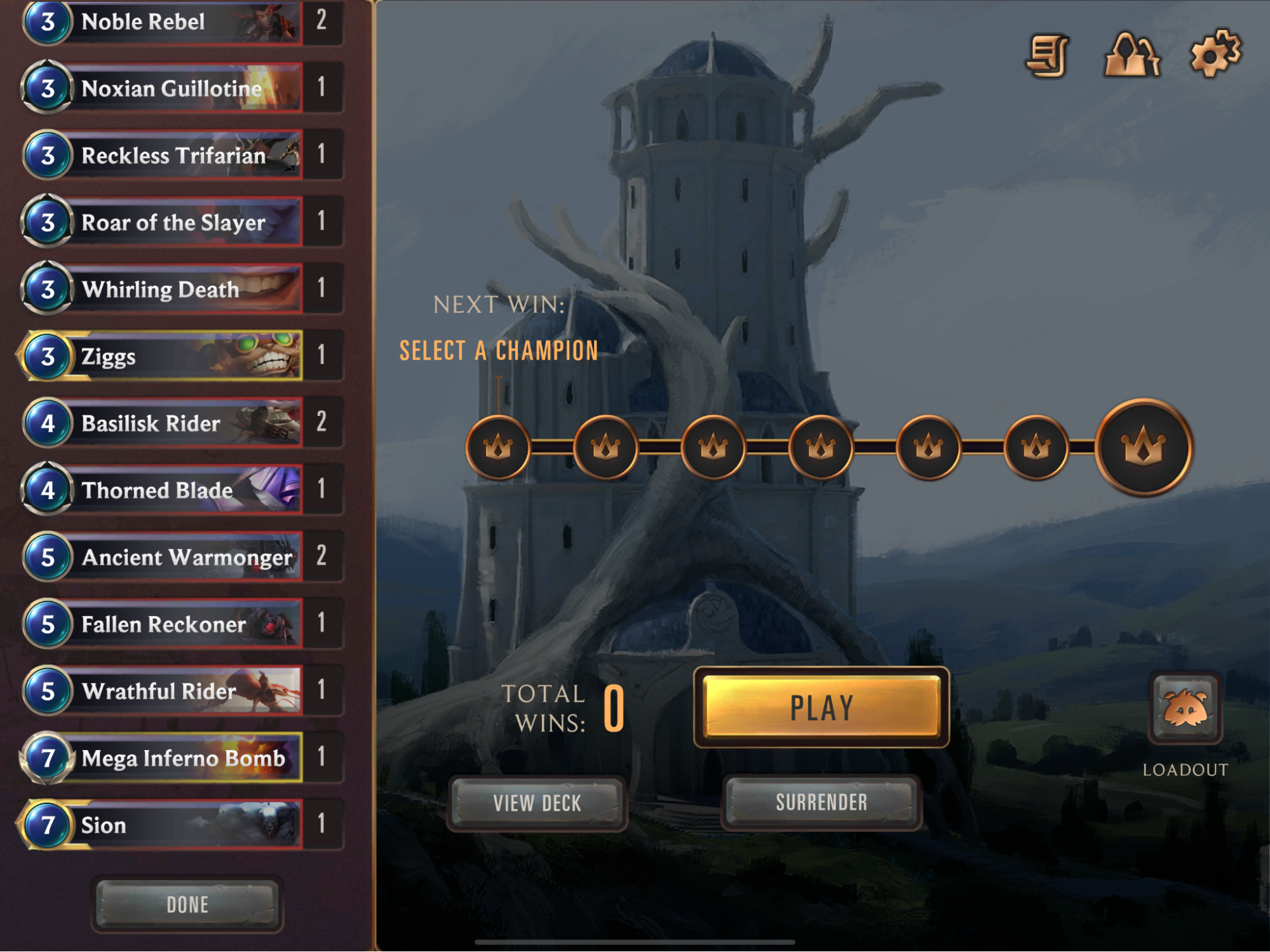 Well, what do ya think? I think we did pretty well overall. We managed to draft a minimal amount of dead cards, acquire a ton of discard synergy on both halves, and have a reasonably balanced curve of solid units. Plus we got some removal and reach mixed in!

We certainly could’ve done better, but all in all, it’s a great starting point. Remember, when it comes to Expeditions, things won’t always go as planned. So try to take the best odds and work with what you’ve got.

Or just mess around and draft literally anything you want. Have fun with it!

Would you break a promise to someone you care about, simply because of the mild effort or inconvenience it would take to keep it? Of course not. In fact, we’ll often take extra steps just to fulfill the deed.

Our promises to ourselves? Well, that’s a different story.

Make “You” a priority. You owe it to yourself.