Forces From Beyond Impressions: Kai’Sa

Today Kai’sa was revealed along with many other exciting cards! 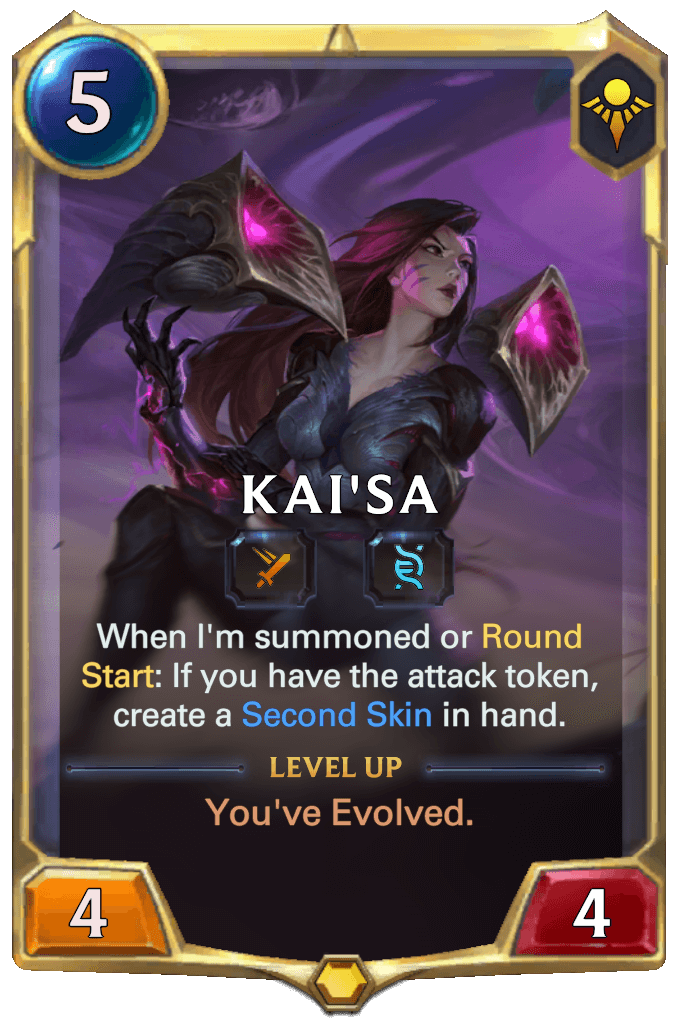 Kai’Sa is the first unit to showcase the new keyword: Evolve. Evolve means when you’ve the card has +2/+2 when you’ve given or summoned other allies with 6 positive keywords. Kai’Sa also levels when she Evolves. 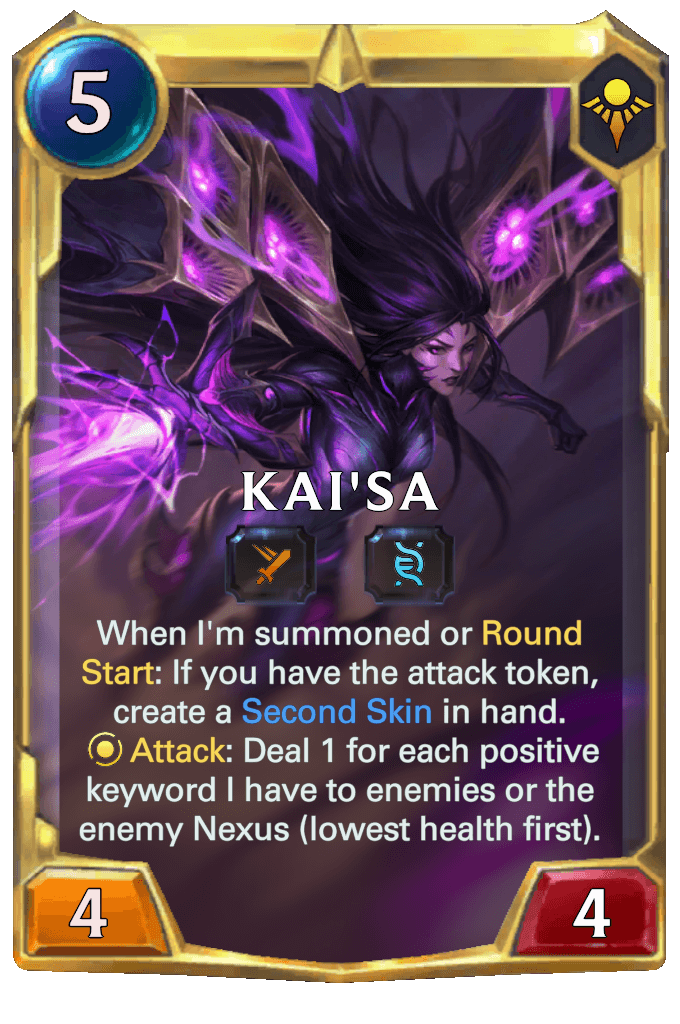 When Kai’Sa is summoned or when you have the attack token she generates a Second Skin. Second Skin picks an ally, then grants Kai’sa positive keywords they have. 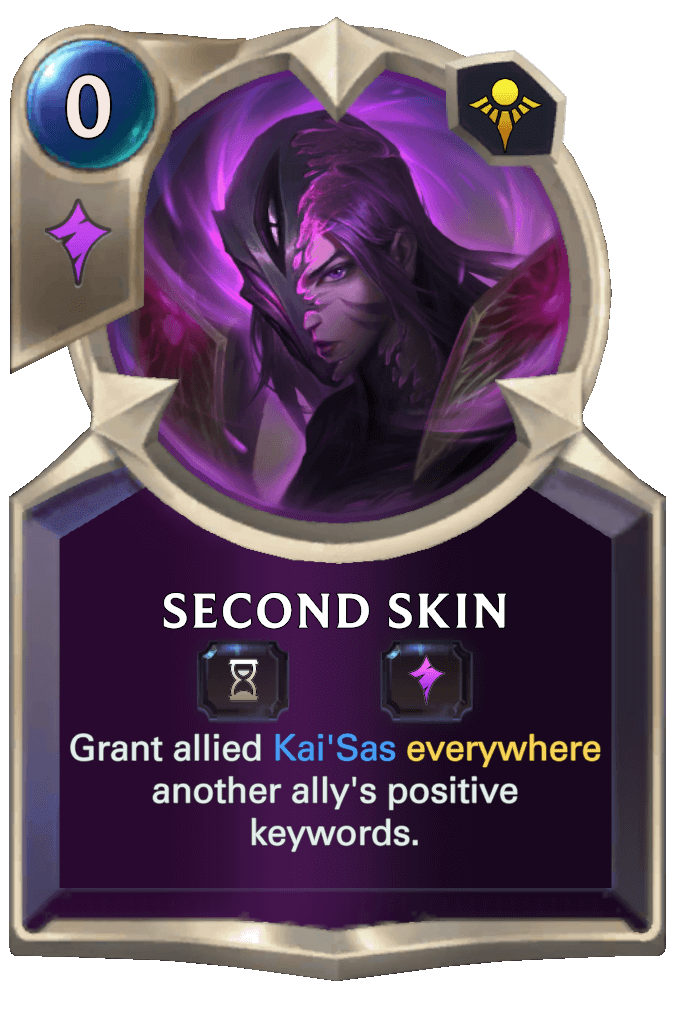 This allows you to swiftly level her as well as granting her tons of positive keywords. If Kai’Sa attacks when leveled she deals 1 to the weakest enemy or enemy nexus for each positive keyword she has. Kai’Sa can quickly become an unstoppable force with a ton of keywords and strong damage output.

You want to build Kai’Sa decks with as many positive keyword units as possible to quickly level her, utilize Second Skin, and work towards evolving her. 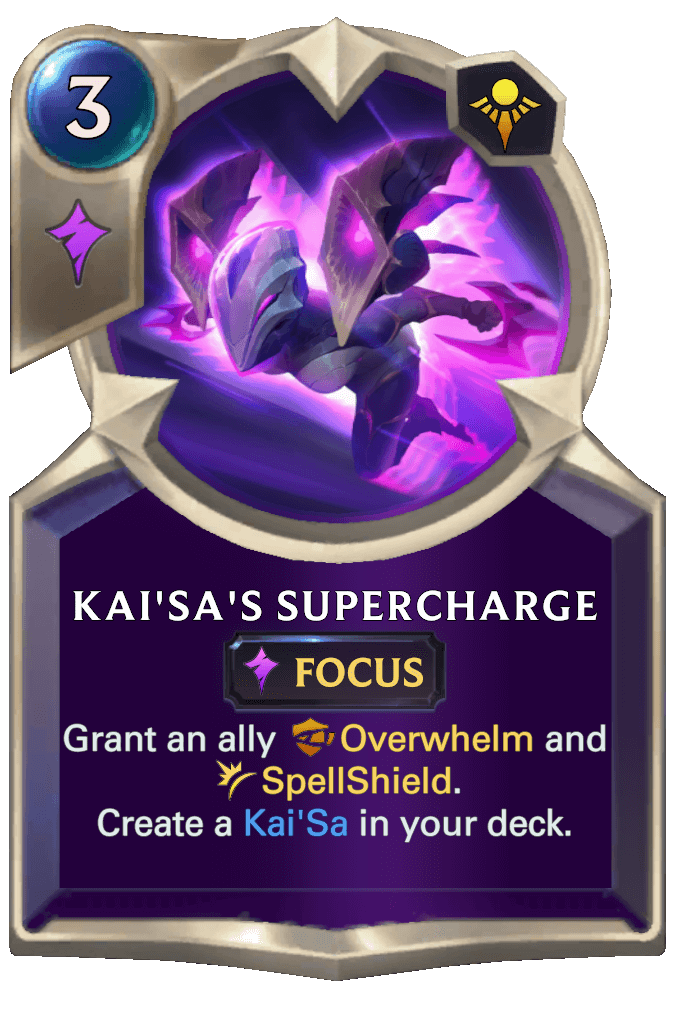 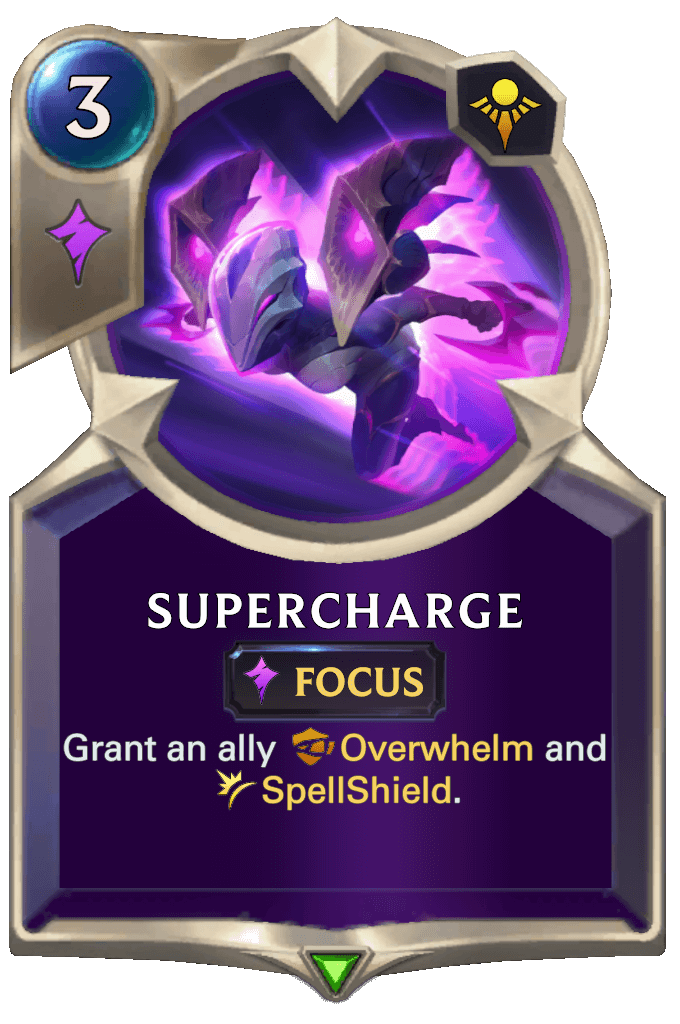 Supercharge is a 3 mana Focus spell that grants an ally Overwhelm and Spellshield. Supercharge being in Shurima can definitely lead to some crazy combo decks. Shurima has been known for their powerful otks lately via Papercraft Akshan/Renekton/Fizz. Supercharge is perfect for decks such as Akshan/Lee Sin to safely accomplish Lee’s otk.

Even teching Supercharge in Nasus/Thresh to grant Nasus Overwhelm and Spellshield can lead to some wild gameplay. Overall, Supercharge will most likely be used in Kai’Sa decks to help turn her into a win con, achieve her Evolve and level her for game. 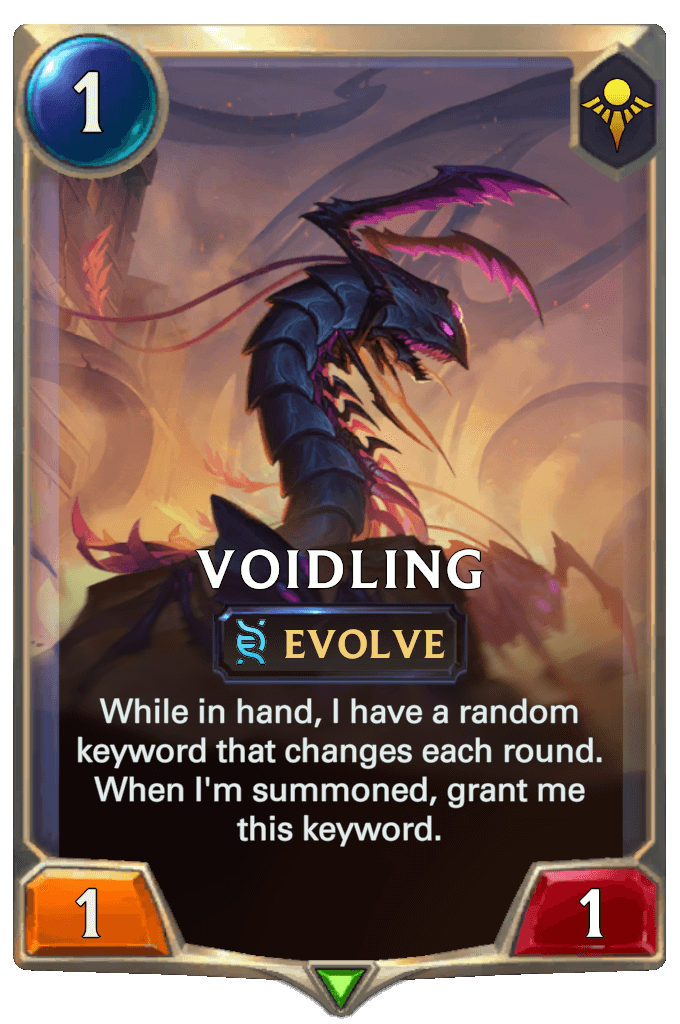 Voidling is a 1/1 that has a random keyword in hand that changes each round. When summoned, the Voidling keeps the keyword it was summoned with. The Voidling is a great way to fish for certain keywords to add onto Kai’sa with her Second Skin.

Keywords such as Tough or Spellshield can make her more resilient to removal, while keywords such as Overwhelm and Elusive can turn her into a win con. Voidling also has evolve itself so when you do level Kai’sa, it will gain +2/+2 as well. 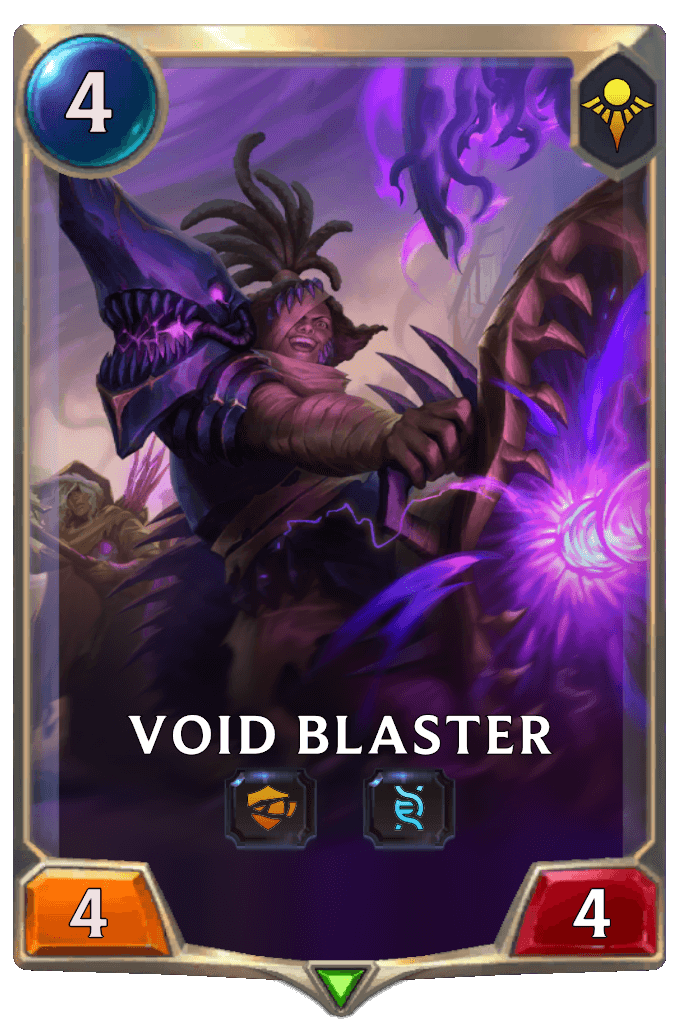 Void Blaster is another unit in Kai’Sa archetype. Void Blaster is a 4/4 for 4 with Ovewhelm and Evolve. This unit is primarily meant to be used for Kai’Sa’s Second Skin to copy the Overwhelm and turn into a win con. Void Blaster also has Evolve so it gains +2/+2 when Kai’Sa levels.

The reason this is particularly good is because it gives you another wincon/pressure alongside Kai’Sa. Evolving shouldn’t be too difficult to achieve in a deck focused around it, so a lot of the time Void Blaster will be a 4 mana 6/6 Overwhelm. 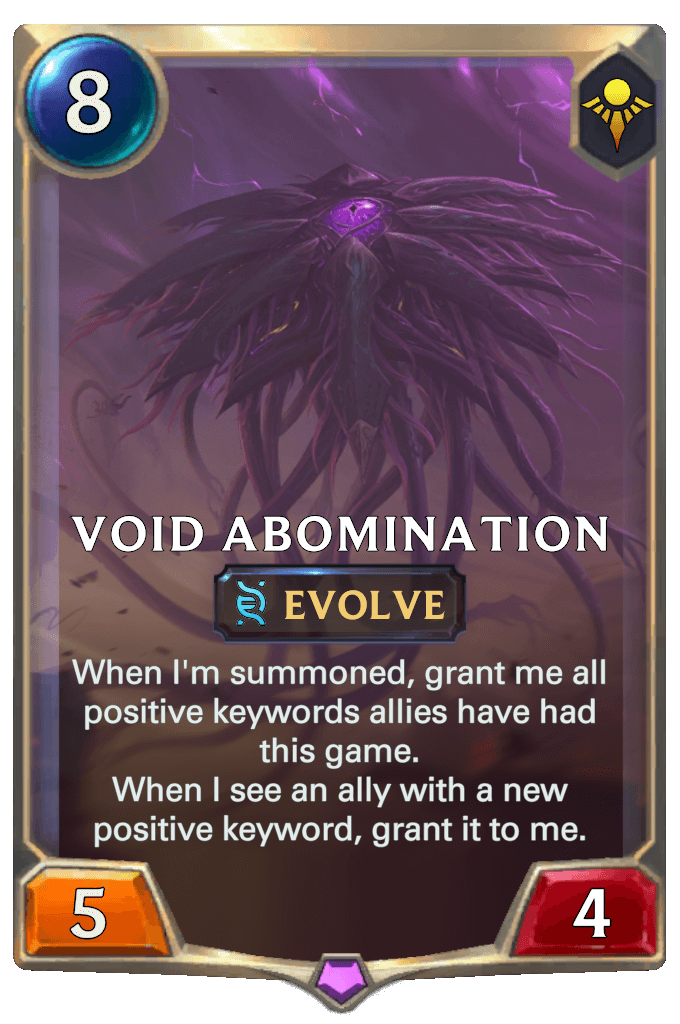 Void Abomination is an 8 drop that grants itself all positive keywords allies have had this game. This card is similar to The Arsenal as an 8 drop that comes down with tons of keywords. If your opponent can’t answer it, then you win the game.

Overall I think this cards stats aren’t strong enough to justify its cost and will often be a much weaker Kai’Sa. Its expensive nature will cause scenarios where it’s bricky or too slow. This card could become a potential 1 of for top end in Kai’Sa decks. 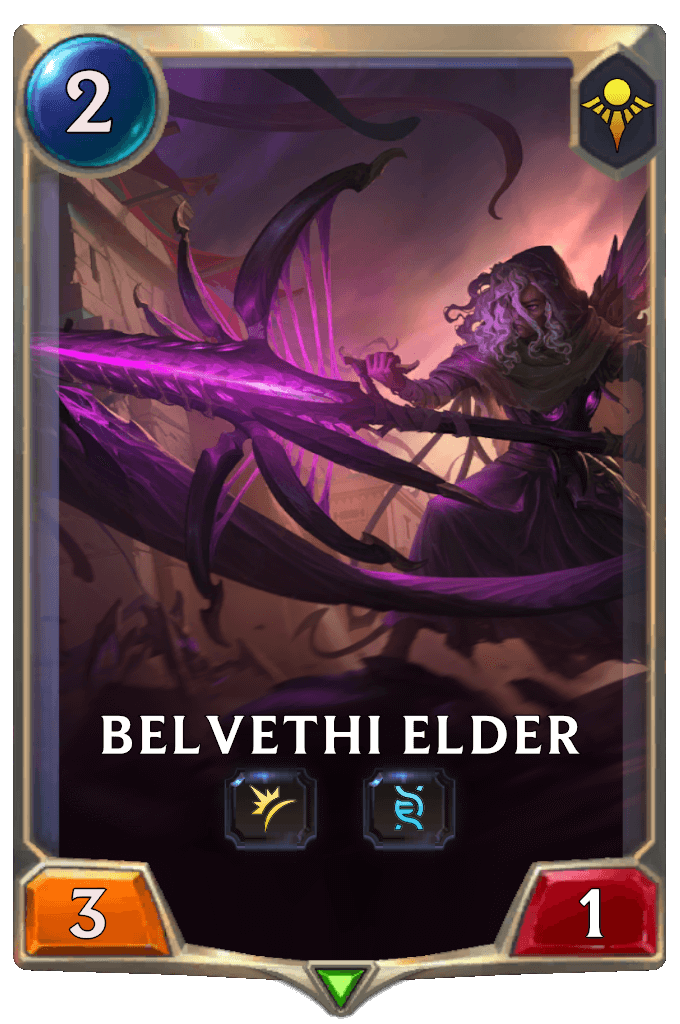 Belvethi Elder is a solid 2 mana 3/1 with Spellshield and Evolve. The Spellshield is great for Kai’Sa’s Second Skin to copy, a 3/1 statline allows it to trade if needed, and the Evolve gives itself a payoff once you’ve played enough keywords. This card is likely a solid 2 drop in the Kai’Sa deck due to how well-rounded the card is for Evolve decks. 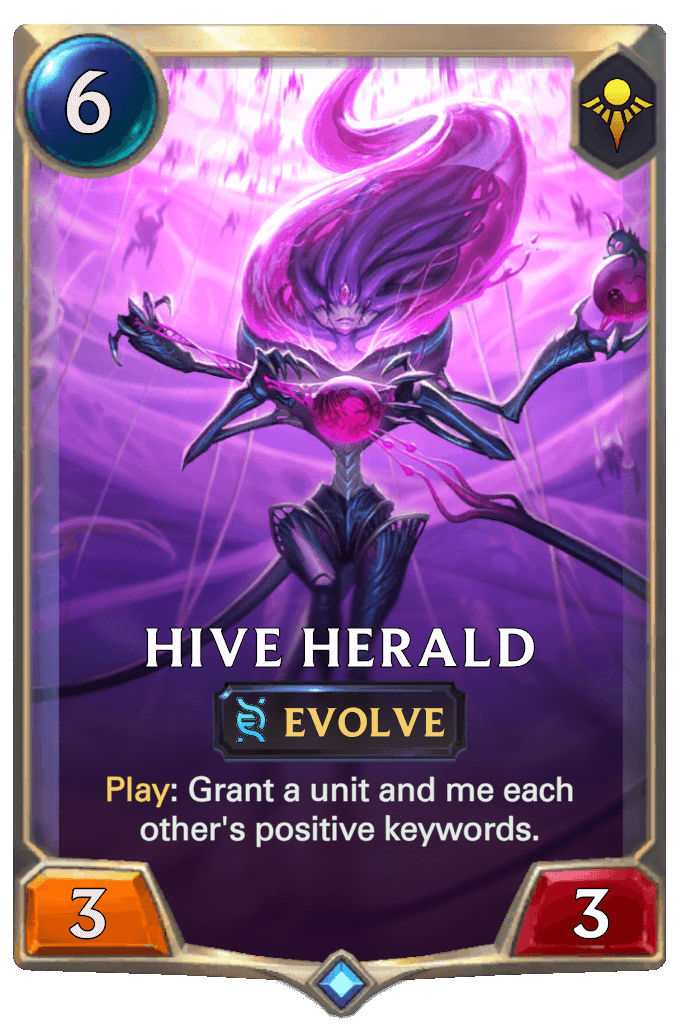 Hive Herald is a 6 mana 3/3 with the Play ability to grant an ally and herself each other’s positive keywords. Essentially Hive Herald gives another ally Evolve, while gaining the keywords of an ally. This card seems a bit slow and expensive in the Evolve deck, as well as redundant.

Most allies in the Evolve deck will already have Evolve, and non-Evolve decks will achieve Evolve slower. It could be okay for some meme concepts but if you are looking for a ton of keywords it’s probably smarter to just stick to leveling Kai’Sa. 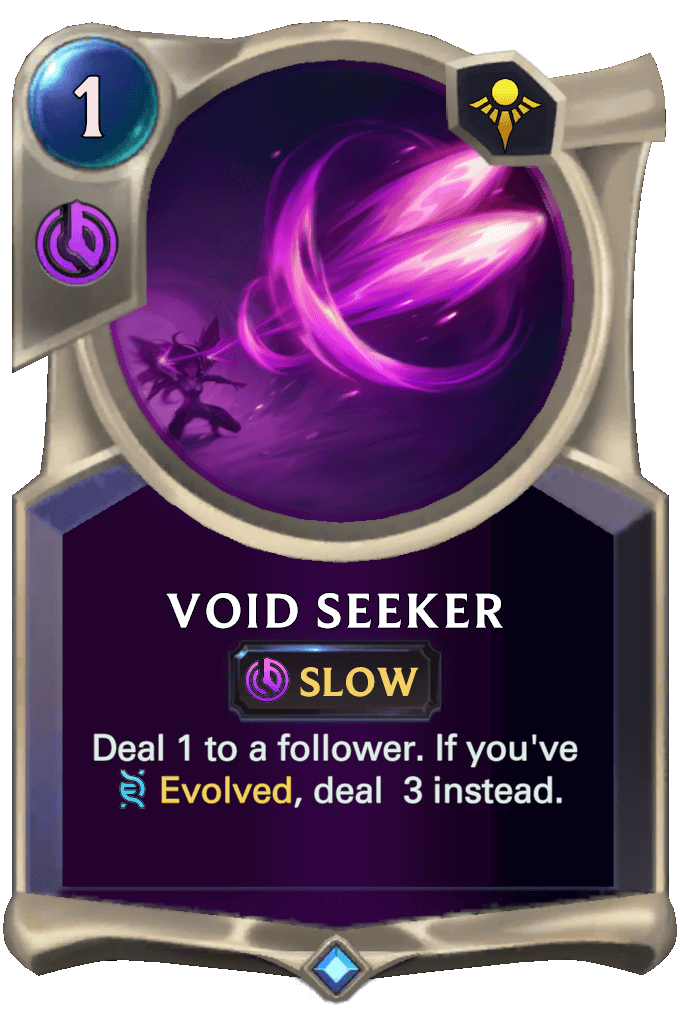 Void Seeker is a 1 mana slow spell that deals 1 to a follower, and if you’ve Evolved it deals 3 instead. It being limited to followers means you can’t use it on Teemo turn 1 as well as the 3 damage effect later on other Champions. This card is weak in the early game since it only deals 1 damage and is a Slow spell.

On the bright side, the card snowballs because it deals 3 damage for 1 mana. Void Seeker is also one of the only damage spells in Shurima. I wouldn’t be surprised if the Kai’Sa decks ended up running it for cheap Shurima removal. 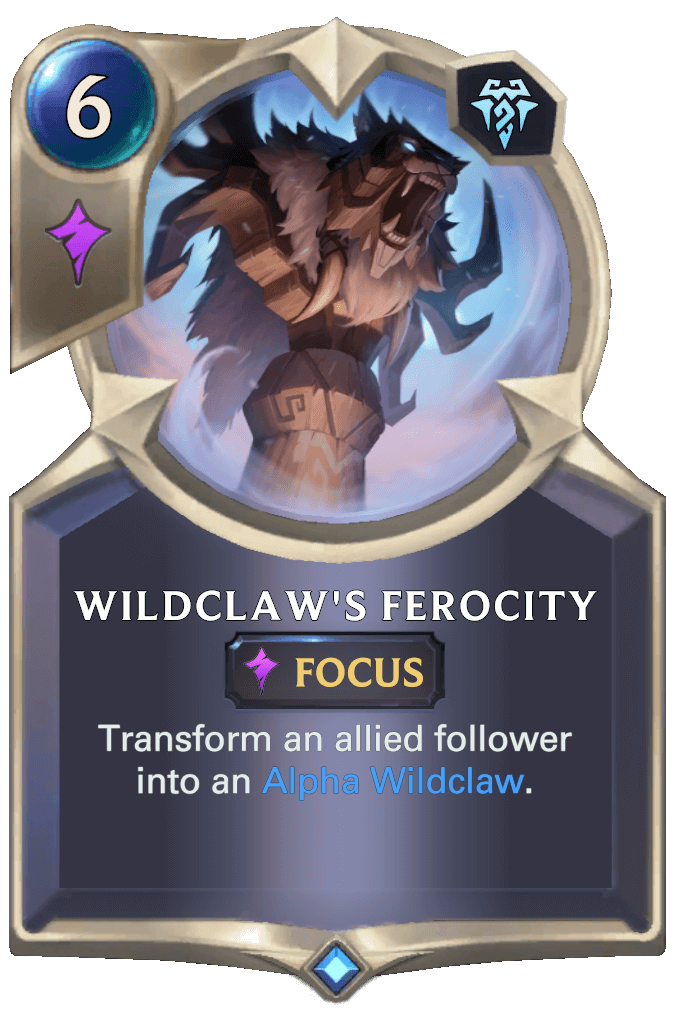 I particularly love how this card is Focus Speed since you could start your turn with it and then immediately swing before your opponent gets a chance to play another blocker. 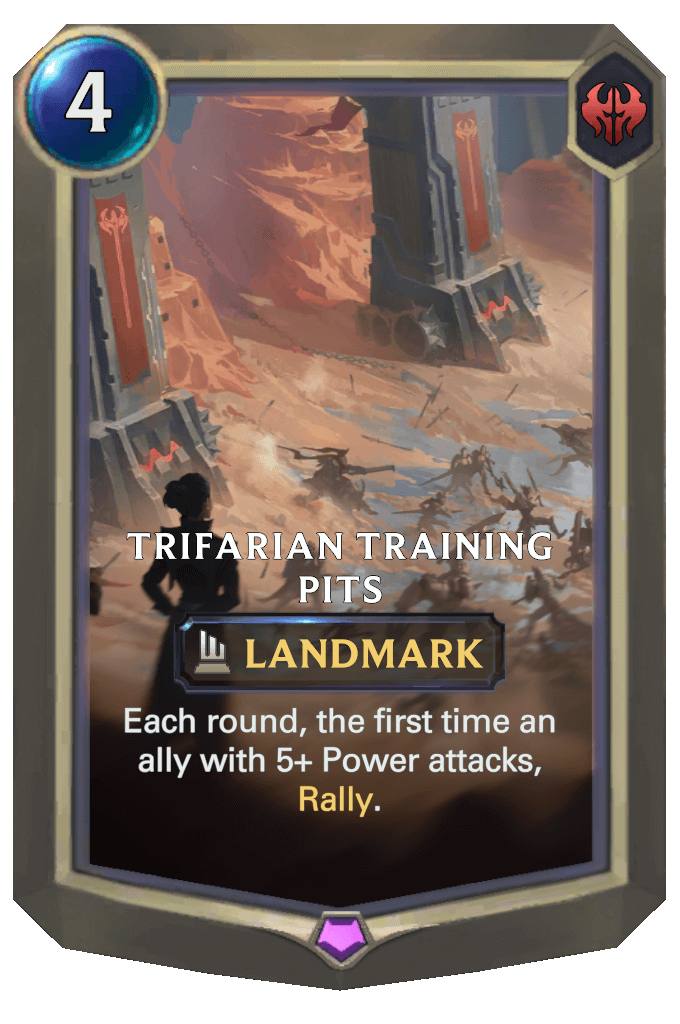 This card is exactly what Sivir Leblanc needed and also could be good in Ashe Leblanc. Sivir Leblanc has tons of 5+ attack allies so this will always be live, and even has the bonus of activating Shaped Stone. You are able to level Sivir, make a huge swing granting your allies Quick Attack + Spellshield, then do it again for game.

Ashe can also make great use of this Landmark. Ashe freezes enemies when she attacks, you can keep her alive in combat via Troll Chant, then you can swing again leveling her and go for game. 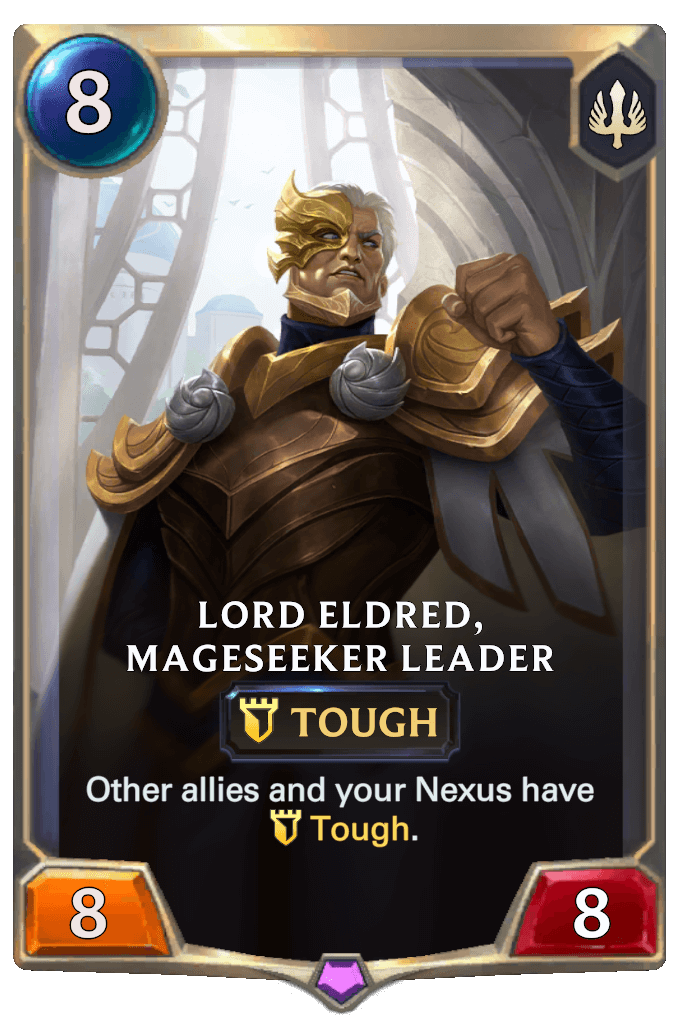 Lord Eldred is a bit expensive for a Demacia card but could be utilized in a Trundle/Demacia ramp deck. We’ve seen these decks pop up in the past with Tianna Crownguard, and Lord Eldred could do the same. These decks are able to beatdown the enemy due to their high statted units and solid combat tricks/combat spells such as Troll Chant and Single Combat.

If you can ramp out Lord Eldred early, an 8/8 with Tough that gives you Nexus tough may be something your opponent can’t deal with. This card will mostly be summoned through Concurrent Timelines via Ice Pillar. 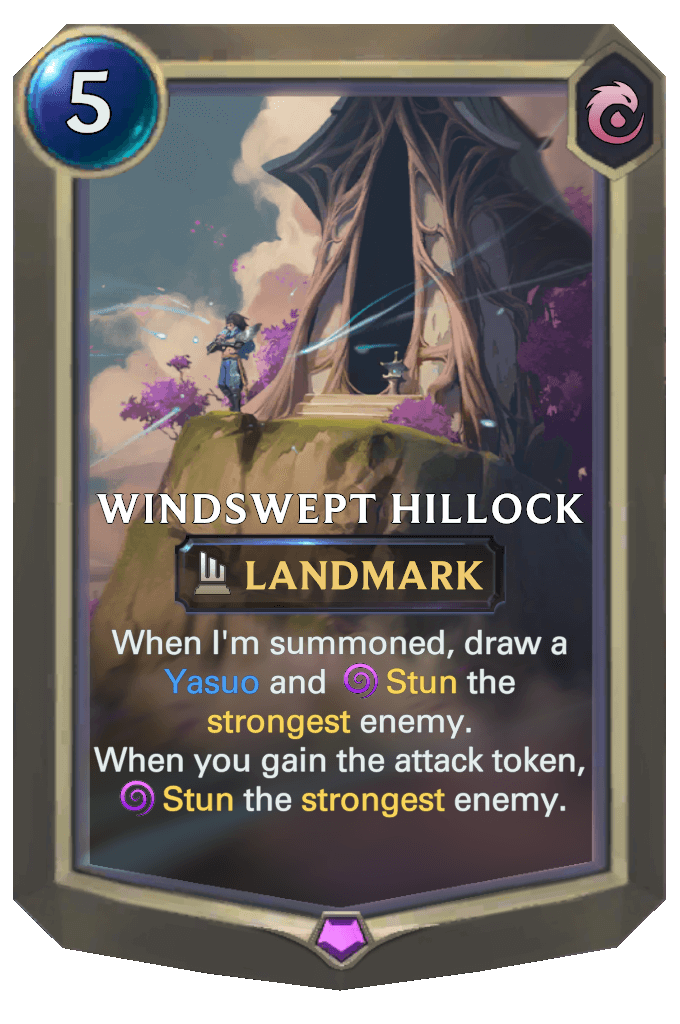 This card is exactly what Yasuo decks needed. The biggest problem Yasuo decks have always had is not seeing Yasuo, so your stuns have no payoff. We now have a Landmark that not only searches Yasuo, but continues to stun each round you have the attack token.

This card will add a ton of consistency to Yasuo decks so you can achieve you stun payoff and lock down the board. This card is a mandatory 2-3 of in any Yasuo deck because it fixes the problem Yasuo has had all these years. If you are a Yasuo fan then rejoice because this is the perfect card for you. 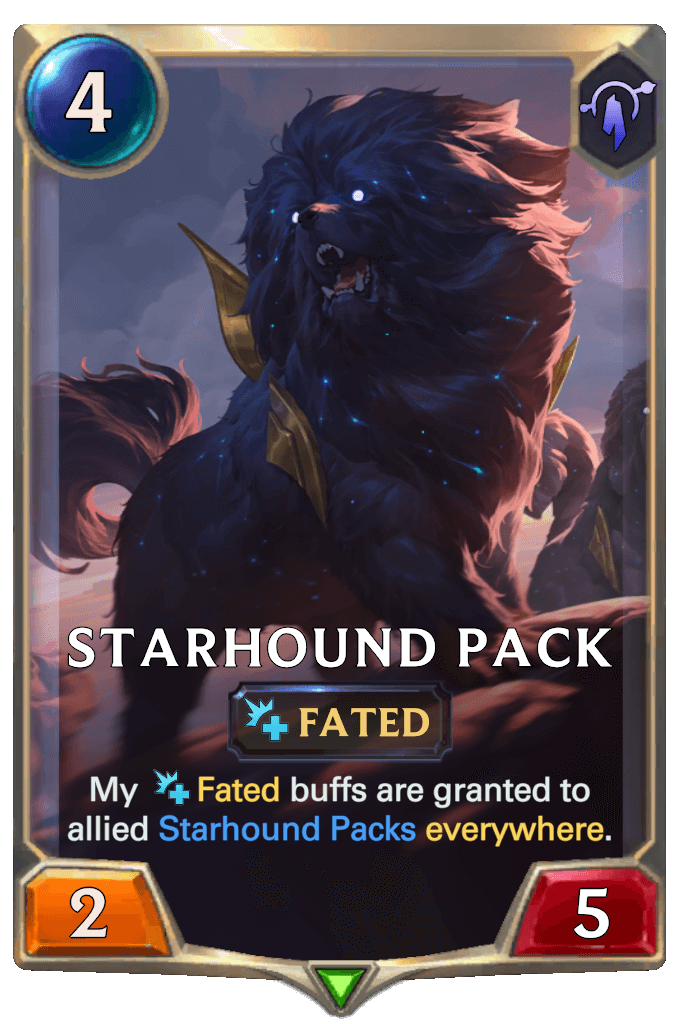 Starhound Pack is a 4 mana 2/5 that grants it’s Fated buffs to Starhound Packs everywhere. This card can be nice to have more Fated units but likely won’t see play. Other Fated units are so valuable because they come into the game early, so you can start racking up Fated buffs right away.

Then when turn 4-5 hits, you can slam down Pantheon and win the game via his plethora of keywords. Starhound Pack comes into the Fated gameplan a bit too late and you aren’t guaranteed to see other Starhound Packs either. Regardless, this card is still an option for Fated decks if they needed more Fated units. 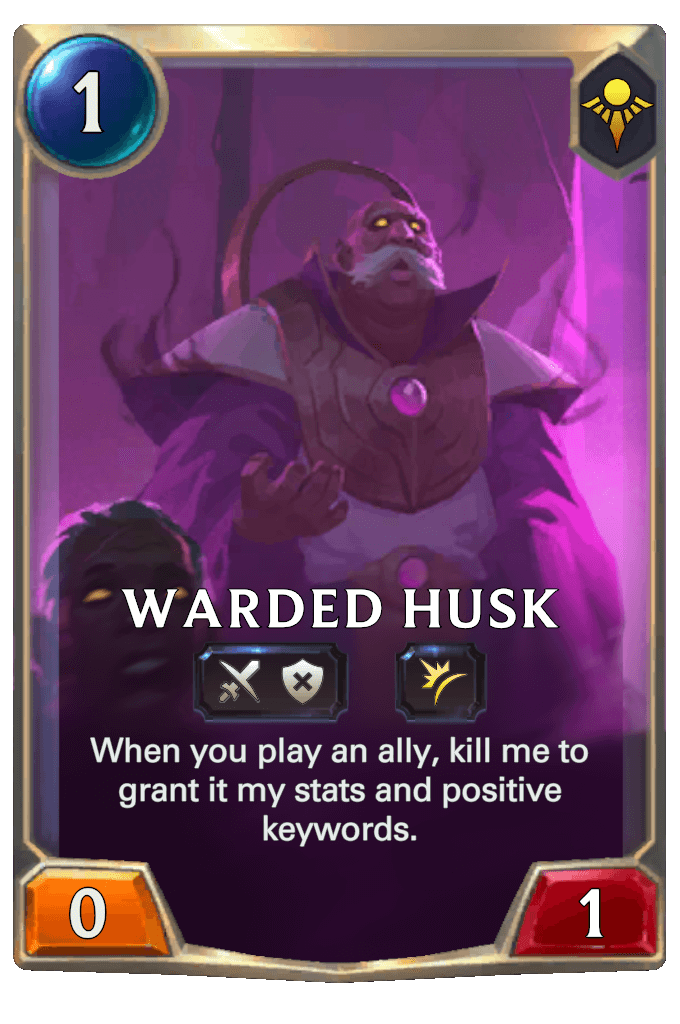 Warded Husk is a cheap and simple card that effectively grants +0/1 and Spellshield to a unit. Warded Husk is in Shurima and works perfectly with the Kai’sa decks.

You can summon Warded Husk right before playing Kai’sa to give her extra health and Spellshield immediately. This makes it so they can’t remove her while she’s racking up her keywords. 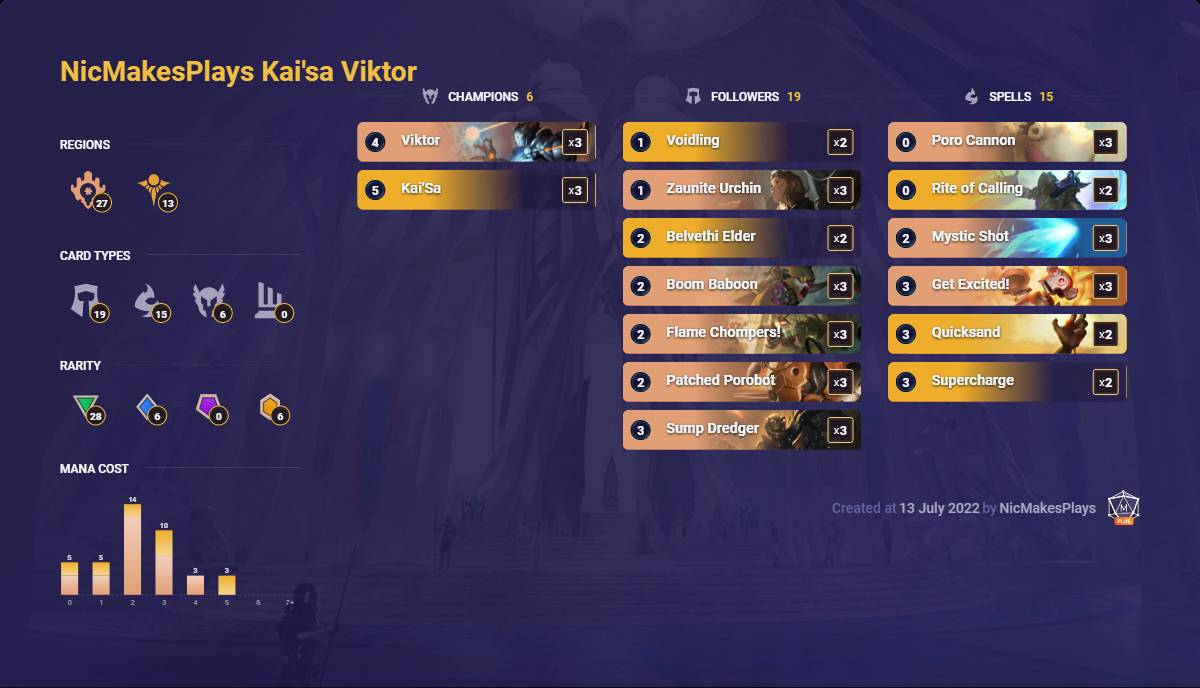 Here is a generic rough draft for a Kai’Sa Viktor deck. This version of the deck was made to turbo level Kai’Sa as fast as possible. The Voidling/Poro Cannon/Chompers quickly levels Kai’Sa due to how cheap these cards are for the plethora of keywords they provide. Zaunite Urchin, Sump Dredgers, and Boom Baboon help you refuel, keep up card advantage, summon out Flame Chompers and dig for Viktor/Kai’Sa. I added Rite of Calling to help search your Champs more often, Quicksand for opposing Kai’Sa/Viktors, and Rite of Negation to keep yours alive.

Stay tuned for more reveal articles! To build your own Kai’Sa deck, head to our Deck Builder.