How to Play Black Flame Taliyah

The 2022 Legends of Runeterra World Champion – AragOrnn – brought an interesting deck that no one else brought. It’s Taliyah Ziggs, but not with the standard Bandle City splash but instead an Ionian splash.

This deck performed incredibly well into just about everything AragOrnn went up against due to expert piloting as well as taking advantage of two strong, new Ionia cards The Black Flame and Unworthy Soul. We’ll go over why these cards are so impactful in this deck soon!

Although this deck was part of a World Champion’s lineup – it is not performing very well on ladder. There is a multitude of reasons for this. The environment the players were in is very different from the ladder environment.

The players had one week to test new decks before the tournament. As well as the format is to bring three decks with one getting banned. This allows you to ban any decks that look like they could cause your decks trouble.

However, this Taliyah/Ziggs deck was often the closer for AragOrnn which often signifies that this was the comfort deck for almost everything. Finally, another reason for potentially a low win rate is the deck is ultimately hard to pilot. Hopefully, this guide will help with that!

I personally fell in love with this deck after seeing AragOrnn filling the entire spell stack with Taliyah’s rocks making it so a Rite of Negation couldn’t stop the rocks from being thrown! Since then, I decided I had to play this deck for myself and write about it! 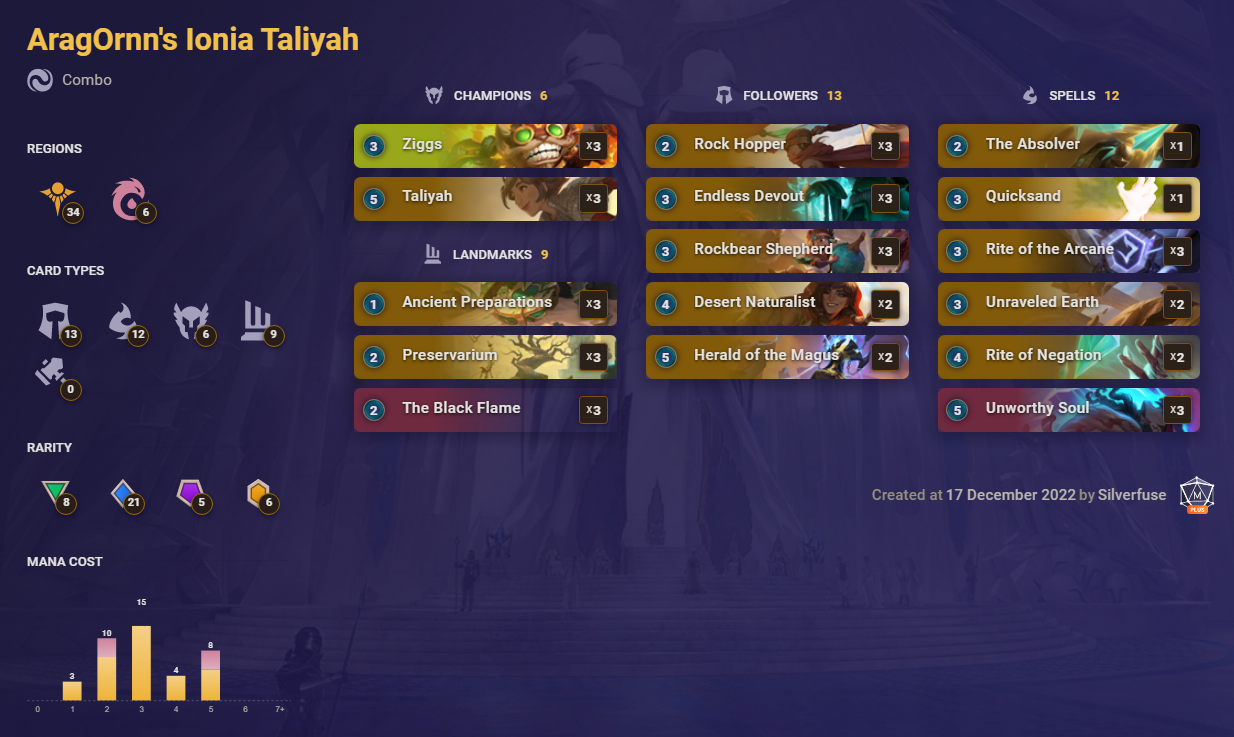 The biggest enabler of this archetype is a new landmark from the latest expansion, which allows you to capture a unit, and whenever you attack, you summon an ephemeral copy that is also attacking. Because this landmark captures a unit when it is destroyed it simply releases the units rather than destroying it.

The only clean way to deal with the landmark is by obliterating it which is typically only found within generated cards in Targon.

This is the card that you generally want to capture Taliyah into as well as use Taliyah to copy this landmark due to the extreme amount of value it provides you! It allows pressure turn after turn! Ideally with Taliyah throwing rock after rock at your opponent’s units and Nexus!

The Black Flame is what allows this deck to have value throughout the game and win in some of this most dire circumstances. Having 2 or even 3 Taliyahs on the board attacking is a lot of pressure that most decks can’t handle – on top of potentially gaining overwhelm from Absolver.

Allowing your next attack to summon two ephemeral Taliyahs along with your regular attacking one and filling up the entire spell stack so you can’t be Rite of Negation’d! 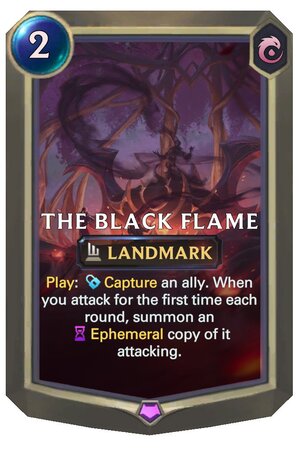 Tip: If you are feeling low on blockers and worried about your opponent’s swing back – you can use Rite of the Arcane to destroy The Black Flame which will cause it to release the captured unit – giving you another blocker!

This deck can have a tough time against returning attacks due to not having a lot of interactive tools, so make sure you are planning your future turns to avoid blowback from your opponent if your Taliyah swing wasn’t enough the first time around!

The other Ionian card is a fantastic choice in metas where removing a more costly unit, such as Aatrox is ideal. Unworthy Soul came up so many times in the world’s tournaments and ended up being clutch.

Due to having Flow: Reduce my cost by 2 mana it often becomes a 3 cost Will of Ionia. On top of that, it also destroys any weapons on the unit before returning them to hand. What an insane card!

It can also be activated in multiple different ways in the deck through Taliyah’s rock hurling skills as well as Zigg’s skill and even Desert Naturalist on top of the spells that are slotted into the main deck. 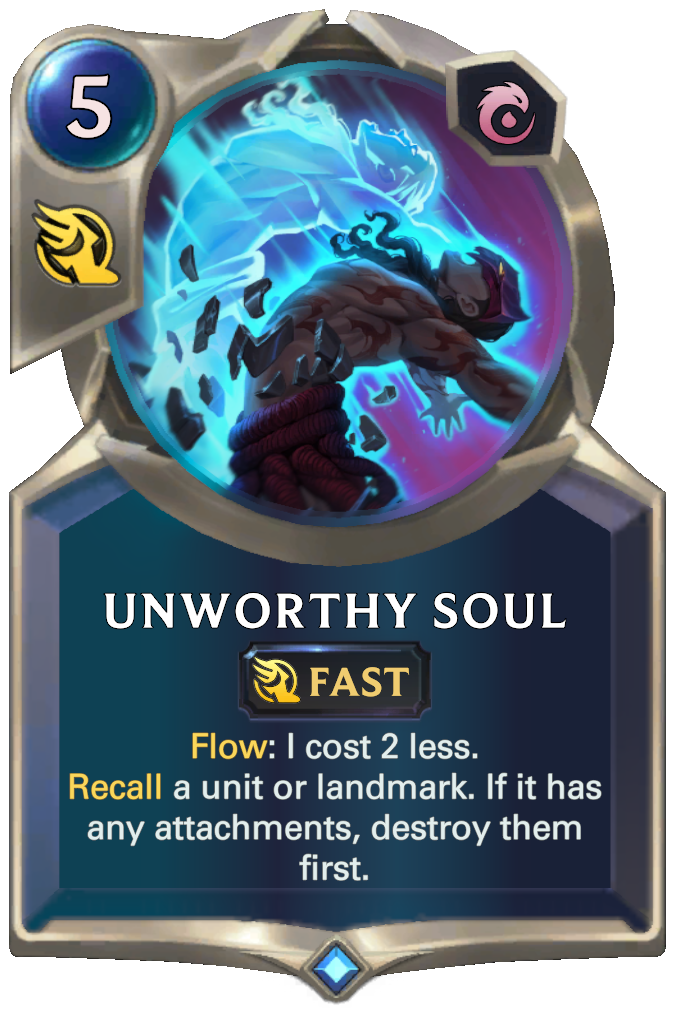 Also, a new card from this expansion that proved to be a huge contender at the LoR World Championship was Rock Bear Shepherd. It got to shine in multiple decks on the World Stage including this one!

As a 3 mana 1|3 it may be easy to overlook this card due to having a lowly stated body for 3 mana. This is because this card generates value as well for each unit you play as well as instantly summons a Hibernating Rockbear which has a countdown of 3 to summon a 5|5 Rockbear which is a well-stated body into most of the meta.

If Rockbear Shepherd isn’t dealt with, it will continue to get value with other landmarks in the deck. There was even a game in the tournament where Mono Shurima won with Rockbear beat down after their Sun Disc was destroyed on turn 2!

This card essentially offers an alternate win condition to this deck besides just Black Flame and Taliyah. It’s often kept and played on turn 3 despite not being a high-tempo play at first as it allows for strong value later in the game and often demands players deal with it! 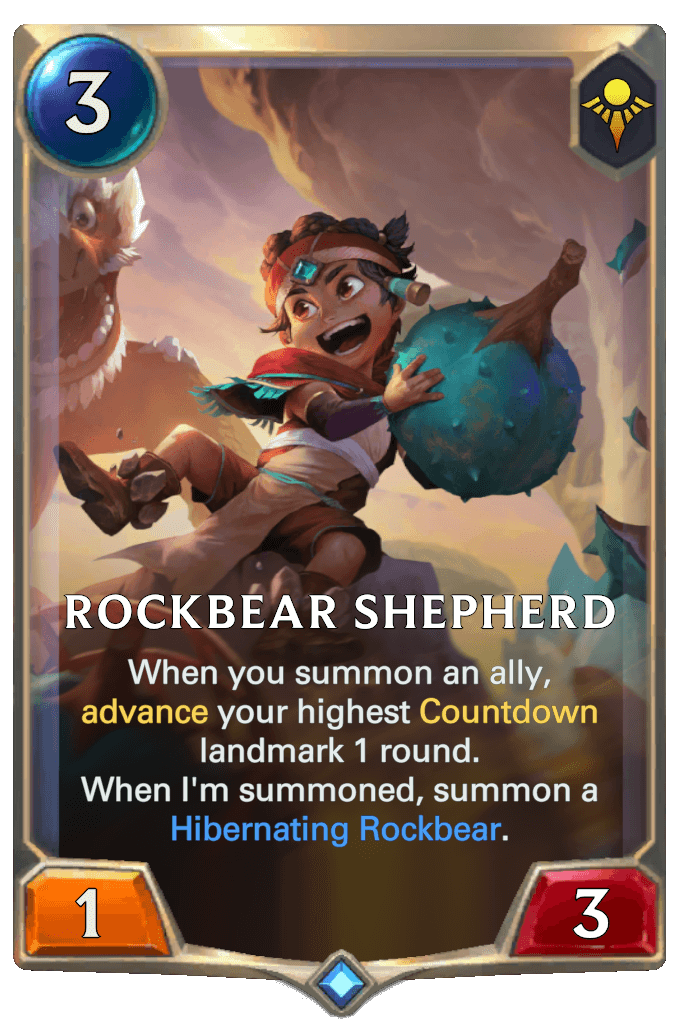 The general game plan of this deck is one of a midrange combo deck. Where in the early game you look to stay alive and get some chip damage in. This is often through early Endless Devout, Rockbear Shepherd, and sometimes Ziggs himself.

You are generally wanting to just have cards you can play these turns such as Ancient Preparations or Rock Hopper. You typically don’t need to have both as saving some spell mana is fine as well as saving units for future Rockbear Sheperd can be the move against slower, value-heavy decks.

You will be looking to play an Endless Devout or a Rockbear Shepherd on this turn to get your game plan going.

This is one of your weaker turns and generally, you take whatever you can at the time to not lose as much health as possible or deal with threats. In some cases, you will want to set up cards such as Preservarium to copy with Taliyah on turn 5.

Getting Taliyah down while copying a landmark is the ideal play here. This allows you to start adding pressure to your opponent as well as setting up for The Black Flame.

Play Black Flame on Taliyah for more pressure against your opponent. At this point she should be leveled as well as you can use Ziggs to put some additional pressure on your opponent.

These turns are you using Taliyah and The Black Flame to pressure your opponent’s final Nexus health on top of maintaining your own health, especially with Unworthy Soul.

You will want to keep track of how much damage you can put out each attack round and calculate when your expected lethal turn is and use that to guide your future decisions on how defensive you want to be.

Remember that finding your Absolver or Herald of the Magus is often a way to allow Taliyah to push the final amount of damage against your opponent!

Against almost every deck I mulligan for my turn 3 which means I want Endless Devout or Rockbear Shepherd in my starting hand. Against more aggressive decks, I prefer Endless Devout.

I will also almost always keep one Ancient Preparations in my starting hand as it allows me for an early gameplay and to take a peek at my deck and set up future turns.

I will generally keep Taliyah and The Black Flame against slower decks that I know I need to combo to win against.
I never keep Herald of the Magus in my starting hand as he cost 5 mana and requires being set up until he can get any value.

He’s a great finisher, but he’s not meant for the opening hand even against more greedy decks. Your Taliyah combo and getting your 5 landmarks online to level her up are much more important!

Rite of Negation may be kept in some cases against decks with heavy removal such as Shadow Isles control lists.
Unworthy Soul has some instances it could be kept when you expect a tall threat, but because it can’t be activated in this deck easily until later in the game most of the time it will also be a pitch too. 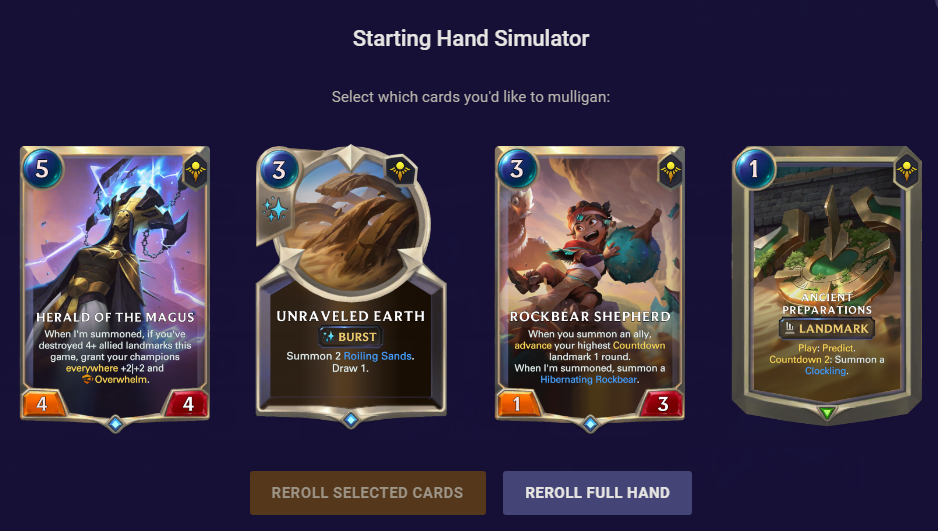 With this hand, I would always keep Ancient Preparations for my turn one. I would also keep Rockbear Shepherd for my turn 3. Herald of the Magus and Unraveled Earth would both be mulliganed.

This deck performed extremely well at Worlds and it looked like it didn’t have a match-up that it didn’t have a solid chance with. Hopefully, you can find yourself feeling the same way with this deck on ladder!