This will most likely mean that Riven, the final champion of the new set, will be unveiled tomorrow!

Unlike Viktor’s pre-reveal package that sort of gave hints for how he’d work, these cards don’t offer too much insight into Riven’s potential mechanics.

Here are the Noxus cards we’ll be covering in this breakdown: 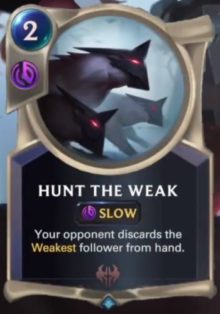 This card is very likely to be too expensive for what it does. 2 mana to not affect the board in any way is not particularly useful.

There are a lot of cute things it can do like potentially removing an Ice Pillar before it can be used to flip Trundle or getting lucky and being able to remove a Ledros from the opponent’s hand.

However, the fact that its cheapest unit means that it will be fairly unlikely to remove the useful card you’d want it to hit. 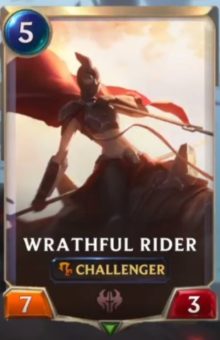 This isn’t a playable card, at 5 mana 7/3 it’s just way too easy to deal with for every style of deck. 3 health is too vulnerable at that point in the game. 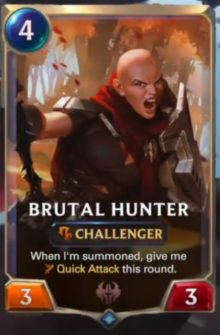 This card is pretty neat and is fairly comparable to Diana. However, it doesn’t use a champion slot and it has an extra point of health and attack. On the other hand, it costs 2 extra mana and doesn’t have the level up threat.

However, the combination of being a removal for a unit and then sticking around is quite powerful and could easily have a home in this game if there are 3 health units that need to be killed.

This card also notably works well with attack buffs like Pale Cascade as well since it can let you remove bigger units as well. 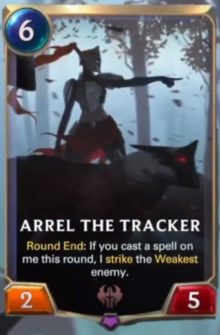 This card is really cool but also probably bad. The fact that it is striking the opponent’s unit means that this serves as repeated removal each turn.

If this card is augmented with attack buffs you can even kill bigger units.

This notably works quite well with permanent attack buffs like what you would get from Gems or from Brother’s bond.

However, 6 mana 2|5 is just way too weak in terms of stat line and the effect comes online way too late into the game to make a big impact.