Our Thoughts on Shyvana’s Reveal Package (Call of the Mountain)

Shyvana, the Half-Dragon, has finally landed in Legends of Runeterra with today’s reveal!

Here are the new cards that were part of Shyvana’s reveal package:

In this article, our Glimpse Beyond experts, NicMakesPlays and Kuvira dive into Shyvana’s cards.

Be sure to also check out Swim’s podcast with Nic, Kuvira, and Precipic for more hot takes and analysis below! 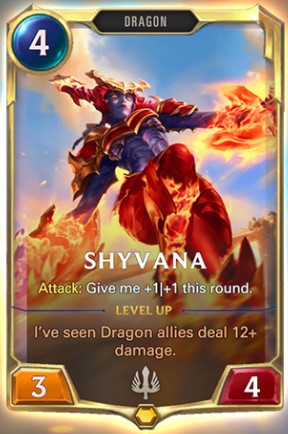 Shyvana is a 4 mana 3|4 that gains +1|+1 this round when she attacks and levels up when she’s seen Dragon allies deal 12 damage.

Since she is a Dragon herself, she counts towards her own level up, is discounted off of Herald of the Dragons and can be played on turn 3, and is searchable and buffable by Dragon’s Clutch.

Shyvana is key to the Dragon deck since she can be played for your turn 3 when discounted. 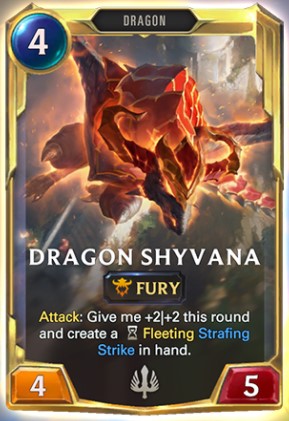 Shyvana has a powerful leveled up form because when she attacks she gets +2|+2 for the round and if she kills the blocker she gains +1|+1 permanently from Fury.

She also gives a fleeting Strafing Strike to your hand which can be used to remove enemy units, and trigger Fury buffs for your Dragons. 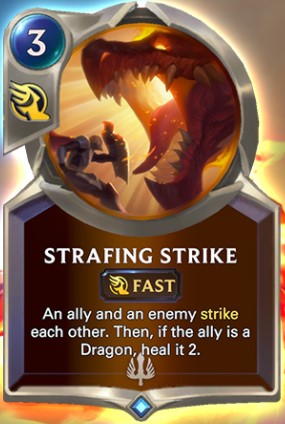 This is the 3 mana fast spell generated by Shyvana’s leveled up form when she attacks. The effect is similar to Single Combat since one ally and one enemy strike each other. After this effect resolves, if your ally is a Dragon, it gets healed by 2.

Getting Strafing Strike every time leveled up Shyvana attacks will allow you to have a useful combat trick that can be used reactively in response to your opponent’s blocks or spells during the turn you’re attacking.

This card is also main deck-able as another Single Combat but generally makes sense in Dragon decks only to get value off of the healing effect. 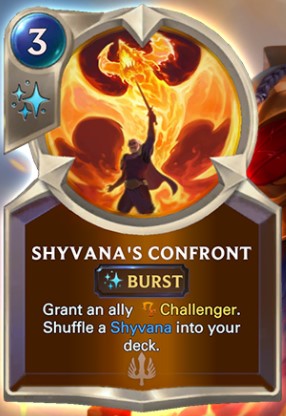 Shyvana’s Confront is a 3 mana Demacia Burst spell that grants an ally Challenger. This card looks like a strong open attack tool, using it on a Dragon before attacking to set up a good trade can come in handy.

However, the 3 mana cost and the low value effect makes it not worth the main deck slot, but you’ll still use it in your Dragon deck when you double draw Shyvana. 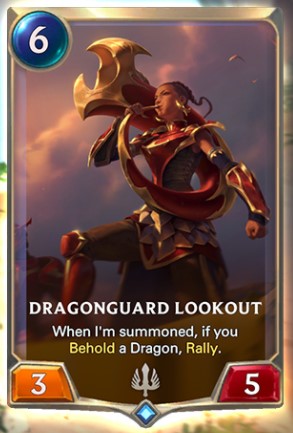 Similarly to Citrus Courier, this 6 mana Demacia follower gives you an attack token when summoned if you have a Dragon in your hand or in play.

It has a pretty weak stat line at 3/5 for 6 mana, which seems too expensive when compared to cards like Relentless Pursuit.

However, in metas where cards like Deny and Nopeify are played a lot, Dragonguard Lookout becomes a great substitute for Relentless Pursuit since it isn’t deniable. 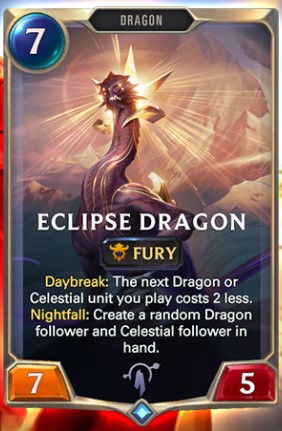 This is the only Targon Dragon card revealed today. It has a unique card text being the only card in the game with both Daybreak and Nightfall effects.

Its Daybreak effect gives you a 2 mana discount for the next Celestial unit or Dragon you play. Meaning that if you play Eclipse Dragon on turn 7 first, Kadregin the Infernal and Aurelion Sol become playable on turn 8.

You could also play Eclipse Dragon on turn 6, with Herald of the Dragons or any of the Frejlord ramp cards like Wyrding Stones, Faces of the Old Ones, or Catalyst of Aeons and follow up with Aurelion Sol on turn 7.

Eclipse Dragon’s Nightfall effect is not as strong as its Daybreak effect. When you play it after playing another card, it creates a random Celestial follower and Dragon follower in hand.

This includes all the Dragon followers like Screeching Dragon, Fused Firebrand, The Empyrean…and Celestial followers from The Serpent to The Scourge.

The Nightfall effect generates a lot of value in the mirror or versus greedy decks when games take a while to end.

Overall, Eclipse Dragon fits the curve as a 6-7 drop in the Dragon deck better than the new 7 mana cost Dragon Stalking Broodmother. 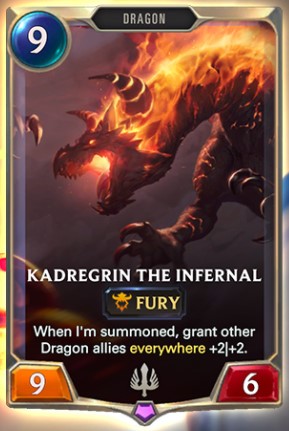 This card is a good win condition in the late game for Dragons. It costs 9 compared to Aurelion Sol’s 10 so it comes out a turn earlier. A perk to running this card over Aurelion Sol is that it allows you to have more champ slots.

You can play Eclipse Dragon on turn 6-7 and then play Kadregin the next turn after.