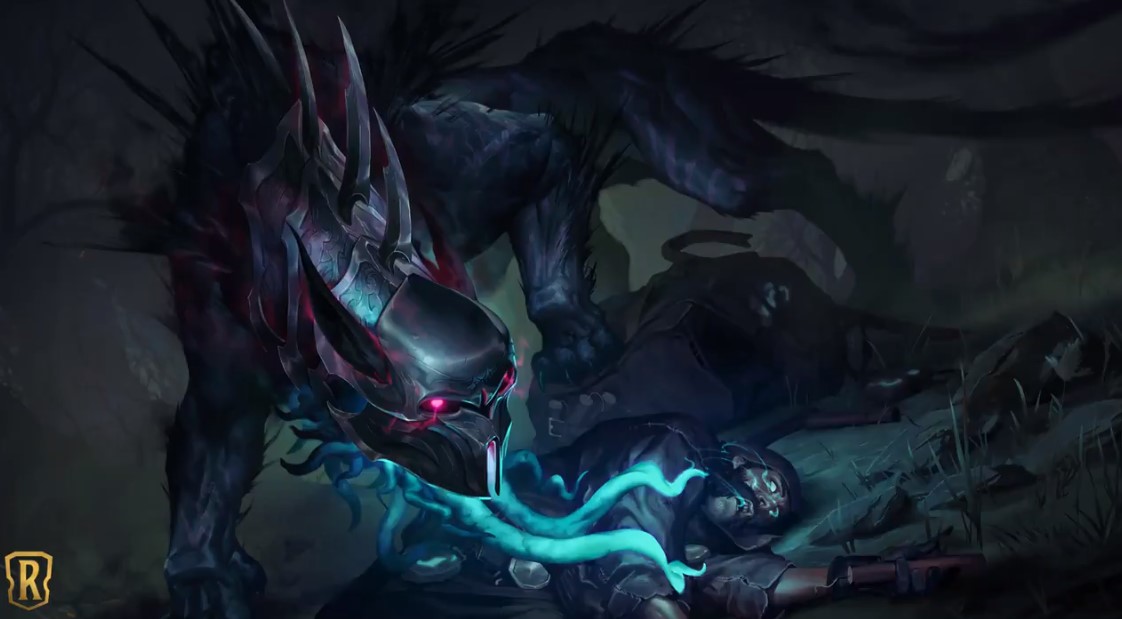 The latest card reveal package for the upcoming Call of the Mountain set is for Shadow Isles…and all signs are pointing toward Nocturne being its new champion!

Here are the new Shadow Isles cards for CoTM:

In this article, our Glimpse Beyond experts, Precipic, Rattlingbones, and Silverfuse give their thoughts on all the new cards. Nightfall is the latest keyword mechanic to be revealed and it’s a pretty simple one. Basically, if a card with Nightfall isn’t the first card you play in a round, it will grant an effect.

If you’ve played Hearthstone, this is basically the same thing as the Combo mechanic that is primarily found in Rogue decks.

Expect Nightfall to open up more concepts that involve 0 mana cards like Fading Memories and Ravenous Butcher for Shadow Isles. Rattlingbones: Stygian Onlooker is a 1 drop with good stats/effect. I can see a world where it’ll see some play in aggro/burn type decks.

Precipic: This card is nuts. It basically should go in every aggro Shadow Isles deck and it is efficient enough to go in other decks too.

Just make sure you have ways to enable the Nightfall early. The reality is that a 1 mana 2-1 is pretty fine just to play out on Turn 1 and a 4-1 Fearsome, even if it’s only for 1 turn, is incredibly strong.

Silverfuse: Shadow Isles already has an incredibly strong early game package that can often high roll and when paired with Kalista, can be quite powerful.

This card just adds to it and makes it more consistent. Nightfall is extremely easy to trigger in most aggressive Shadow Isles decks Rattlingbones: Draining 2 from your opponent’s Nexus is always extra reach – the fact that you get a body + the Drain is nice. This again, like the Stygian Onlooker can see some play in aggro/burn type decks.

Silverfuse: This represents reach in Shadow Isles which is not something to underlook especially in aggressive Shadow Isles decks. Rattlingbones: I’m not really a fan of this card. A 5 mana Fearsome with conditional buffs on its power level just doesn’t seem good to me.

Silverfuse: Duskraider doesn’t have enough pay off to see play. There is a possibility for Nocturne along with other Nightfall cards to change the state of this card, but at the time, there isn’t enough for this card to see play.

It is also a very slow card which doesn’t fit the aggressive and tempo playstyle that Shadow Isles is known for. Rattlingbones: I can see this card being a good tournament tech choice pending meta and other card releases. As it stands today, it won’t see much play in rank or tournaments.

Precipic: This card seems like a more targeted version of The Box. It’s a gross as a counter to Harrowing and it’s also a reasonable card vs things like Remembrance, Rekindler, and Thresh.

It is not very good however in general because it doesn’t do anything vs a lot of decks.

Silverfuse: This card is a very obvious tech choice for tournament play but it will most likely be too inconsistent for ladder unless we see more cards which summon units that are threatening enough to run a potentially dead card. Rattlingboness: Encroaching Shadows is better than the previous cards in this release –  you can actually try and brew a deck around the card.

It gives Hecarim an easier time in leveling and also pairs well with Shark Chariot. The fact that you can give everything in the deck and your hand permanent +2/+2 is really cool.

It’s still hard to say if it’ll see a lot of play without seeing the other releases.

Precipic: The fact that this is a 4 mana effect that has no impact on the board makes it a lot worse than it looks.

I would mostly be thinking about this in decks that are able to combo kill the opponent the next turn after you cast this and have ways of dealing with the massive tempo loss of spending 4 mana to do nothing.

Silverfuse: This card is really neat, but I expect it to be a gimmick rather than an impactful card on the ladder.

It is hard to play a 4 mana spell that doesn’t impact the board as well as causes your cards to die sometimes for free. I feel like this card will pull off some silly combos at times, especially when paired with Ionia’s Elusive creatures.

Shark Chariot and Hecarim may have a chance to shine though, it’s hard to say without seeing more cards.

It is by far the most interesting card to test and brew with the 5 new Shadow Isles cards from today.