Hey all, it’s Trevor “Shugo” Yung here. It’s our final day of reveals before the patch.

We’ve seen all the champions, but here’s the last handful of cards to wrap things up. 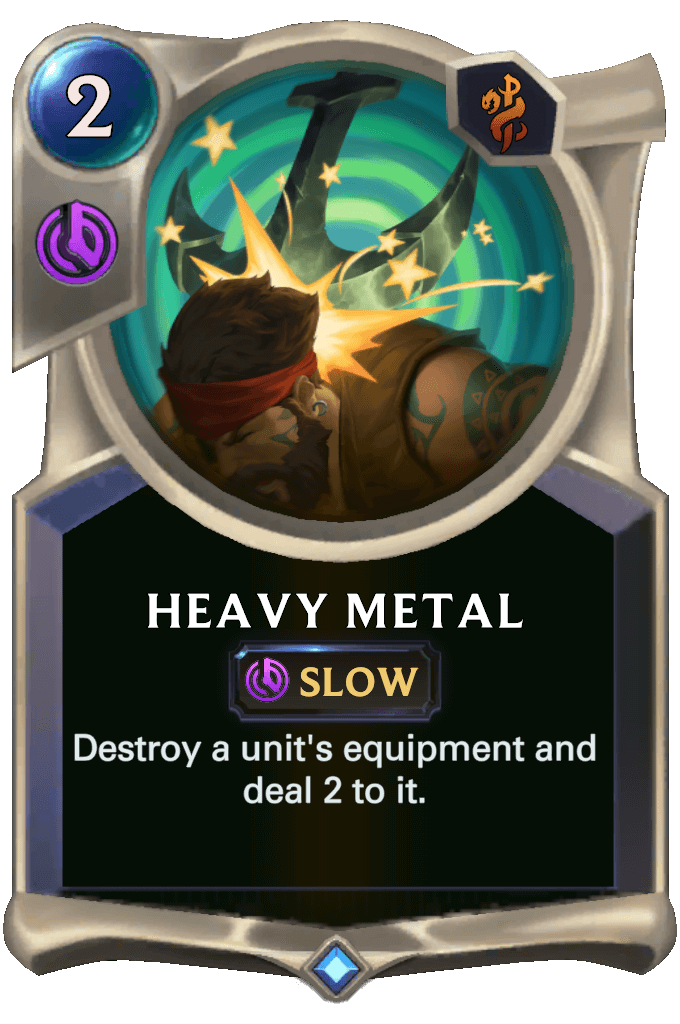 We’re finally starting to see more regions get a reliable early game removal spell. Last time it was Bandle City with Drop the Bomb, and this time it’s Bilgewater with Heavy Metal.

Slow speed deal twos may not seem that impressive, but they are a solid option to help round out the card pool. With units becoming increasingly stronger and with multiple “must answer” threats, we need more efficient ways to combat them. The cost efficiency is worth the speed.

Heavy Metal is a very nice addition to Bilgewater; a region with Keg and spell synergies, but few playable spells. This may open up more deck building potential with other regions that lack spot removal such as Targon or Ionia (now that Bilgewater can fill this role).

Of course, let’s not forget about the equipment destruction. If equipment ends up being a metagame staple, Heavy Metal will be an excellent way to counter it. 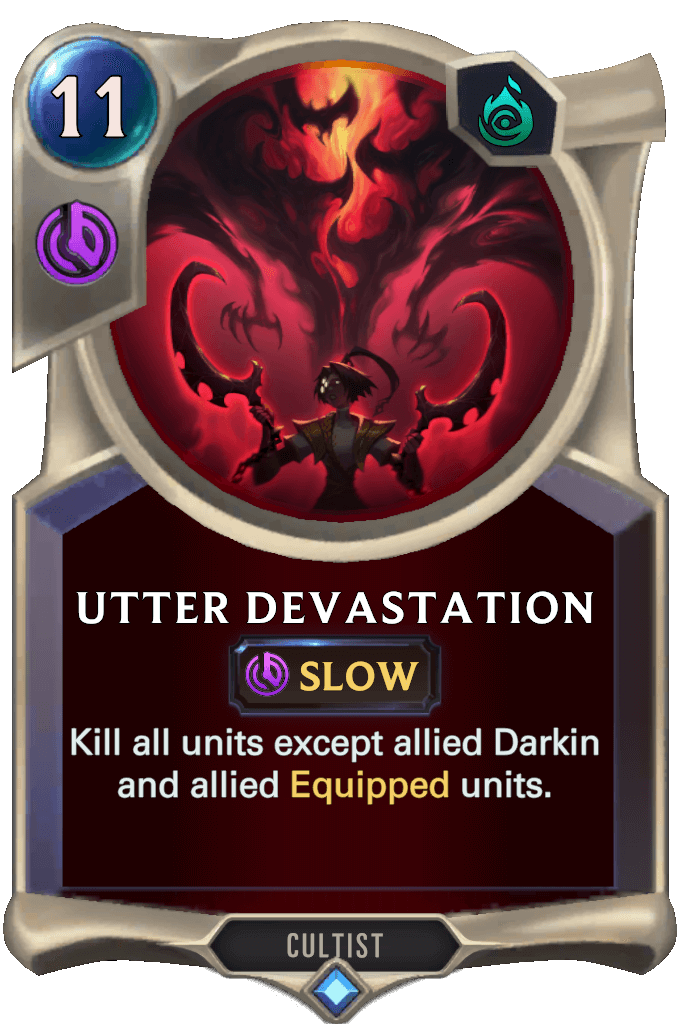 It’s a big bad one-sided Ruination in the right deck.. Somewhat similar to The Skies Descend, except without the potential cost reduction. Thankfully it specifies allied units, so it won’t be a dead card against the mirror.

All that said, it’s still 11 mana. I expect the only time we’ll be seeing this card is when it’s manifested by Ferros Financier. Though I must say, having Ruination 2.0 added to the Ferros pool could be a solid option against certain matchups. 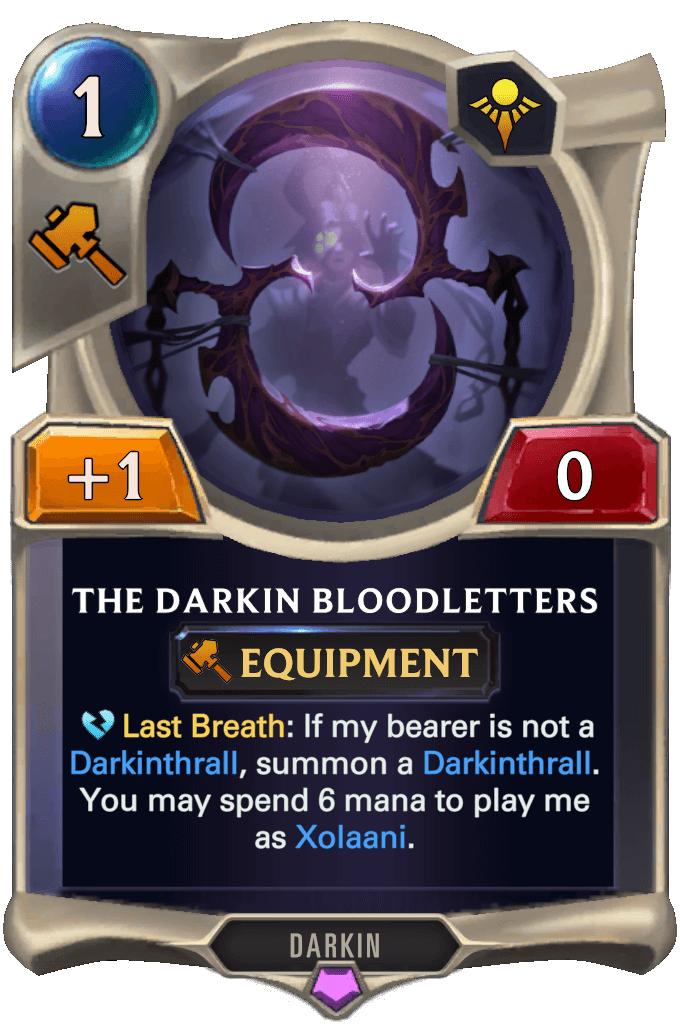 Here’s the last of the “follower equipment” cards, and it’s a cool one at that. Not only does this card double as a follower, but it creates even more followers!

Equip this to a unit, and when it dies, it’ll create another host for equipment. Attaching this to a Darkinthrall turns it into a one mana 4/3. That’s a very cheap threat despite its inability to block.

Having the option to play this as a 7/7 Overwhelm for six is pretty solid. It does come with the additional cost of killing a unit, but has the benefit of recreating the weapon if the unit dies.

The only real drawback here is the weapon itself is basically just a Tiny Spear if the unit doesn’t die. If you’re unable to trade efficiently early on, you won’t be able to take advantage of the Darkinthrall.

When equipped to a non-threatening unit, the opponent may simply ignore it and take the damage, thus denying us the value. So when possible, equip it to a unit that matters!

Looks like we’ve got a few small changes coming up alongside the expansion! 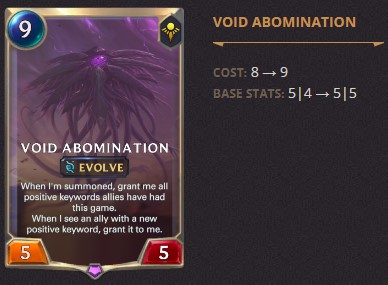 It’s good to see a preemptive nerf to Kai’Sa decks as we go into the new patch. Void Abomination is a game winning threat that can make games feel almost invalidated by the time it comes down.

Increasing its cost to nine mana slows down the inevitability which allows more time for interaction and counterplay. Great change. 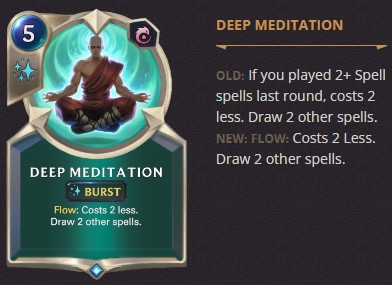 Deep Meditation has been changed to coincide with the new Flow mechanic. This is a really cool buff that opens up potential for Deep Meditation to be run in skill-focused decks.

While it’s seen some play in the past, it was often limited by the reactive nature of Ionia. It’s not always easy to double-spell efficiently, so Deep Meditation would end up feeling clunky.

I’m looking forward to experimenting with this card in a more proactive deck.

Did someone say Jhin? 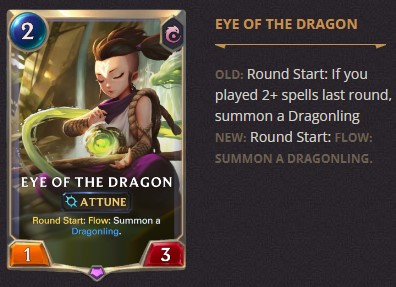 I’d still argue Eye of the Dragon is one of the best 2-drops in the entire game, despite the fact it’s taken a back seat in recent metas.

I think it’ll be less impactful than Deep Meditation, as Eye of the Dragon is a more defensive card. But still a nice quality of life buff either way!

Material items compete for our time. This is especially true with any form of entertainment such as movies or video games.

Before making a purchase, ask yourself…“Am I going to use this today? Tomorrow? This week?”

If the answer is no, then chances are it’s not worth buying; at least not right now. This doesn’t have to mean forever. But it helps show us we have other priorities at this time.