9 Decks That Are Shining After The Magic Misadventures Hotfix

Well, that was fast. One week into the new expansion and Riot drops a surprise emergency balance patch. It turns out the yordles were as problematic as expected, so forget January, things are changing now!

Poppy has finally taken a huge hit, along with the borderline oppressive newcomer; Kennen Ezreal. Our prayers have been heard and now we can move forward. But where do we go from here?

While things will likely change as we discover the new meta, use this as a starting point if you’re unsure where to begin!

Note: We’ll be looking at decks currently at a 55%+ win rate in Platinum+. Given our small sample size, be sure to take the numbers with a grain of salt.

Starting off we’ve got a classic Thralls list. There’s not really anything new here, but this tried and true crushing combo is still performing at a solid 59.2% win rate. Considering the RNG and play patterns that can occur with the deck, that’s pretty good!

Being combo-oriented allows this deck to focus on its own game plan above all else. When it comes to a fresh meta, it’s often best to be proactive until things settle. The patch certainly didn’t harm the deck, so it makes sense to be seeing it here. 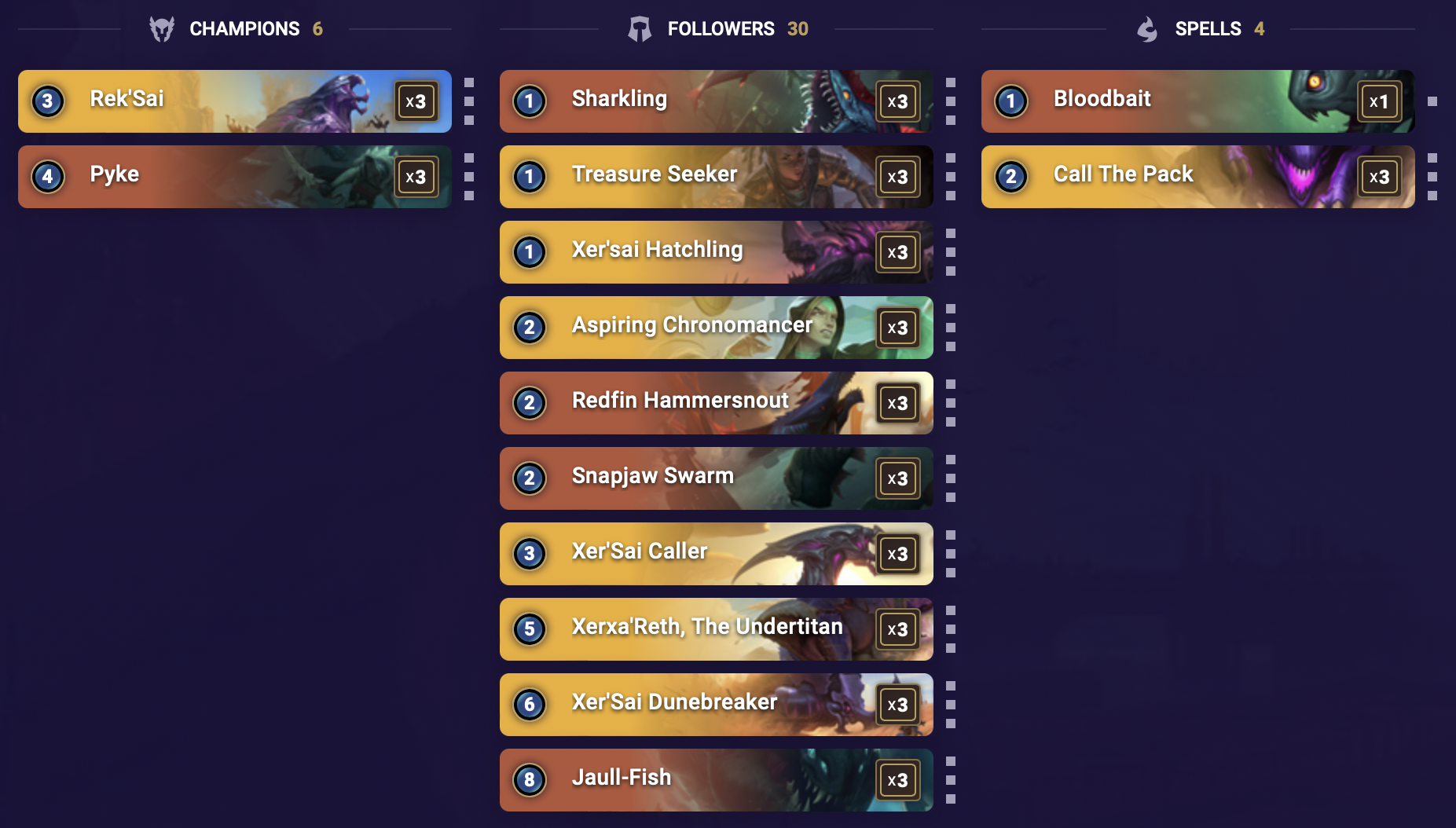 Remember what everyone did during the last expansion? That’s right, we jammed some Lurkers together and called it a day. But who could blame us? 56.3% isn’t half bad for a deck we’ve all played against numerous times.

The list is identical and for fair reason. There’s not much to change when the goal is to maintain better Lurk odds. If you’ve been climbing sluggishly, it wouldn’t hurt to roll with Rek’Sai. At the very least, the games will be fast!

Poke City continues to be a go-to in the early days of ladder. Despite the minor nerf to Gangplank, the deck continues to pile on the pressure. It’s a deck full of interaction which allows for more outplay opportunities, while still functioning like a burn deck. TF GP is currently rocking a 63.9% win rate which goes to show its consistent strength in unsettled metagames. 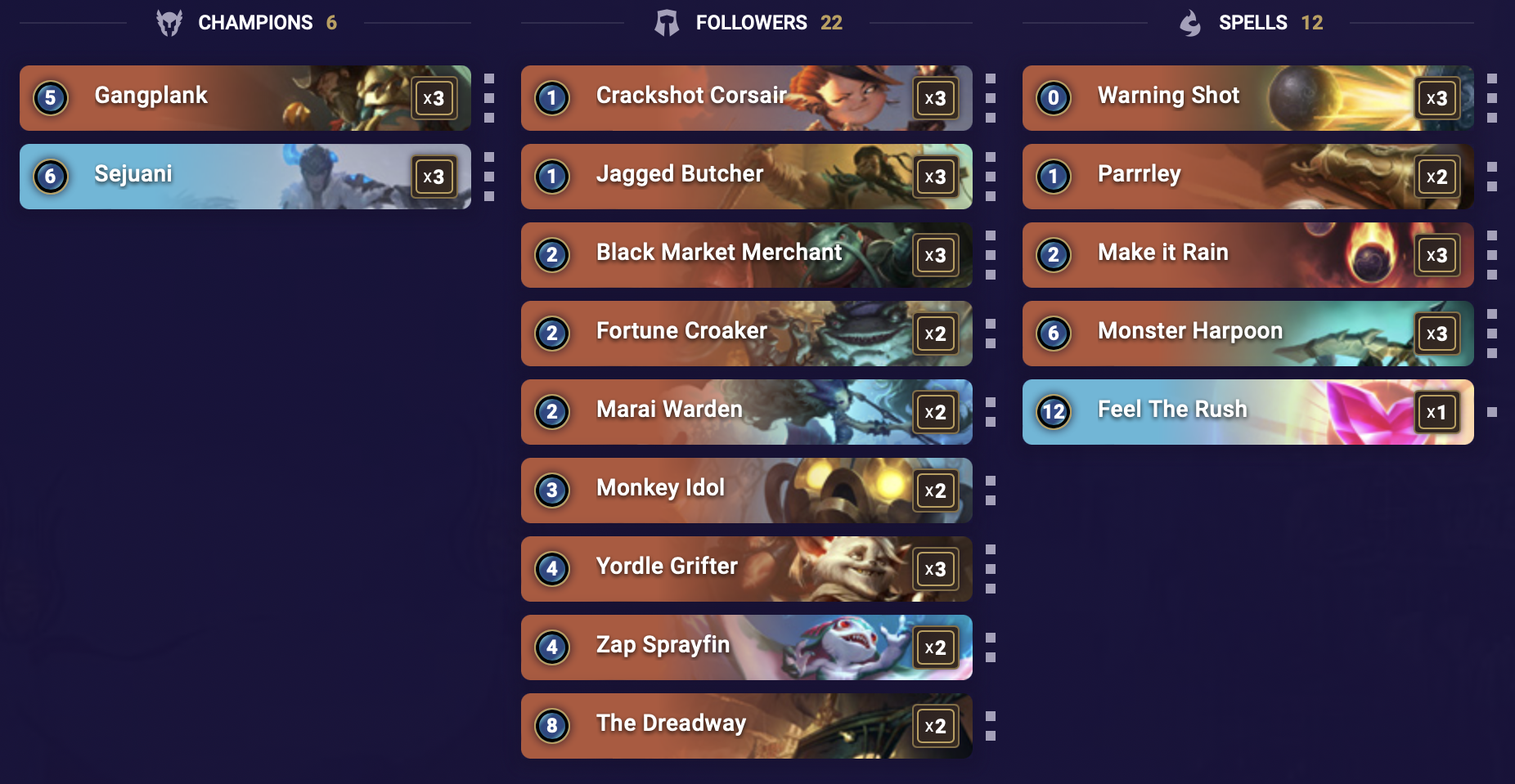 Speaking of Gangplank, Gangplank Sejuani remains the consistent force that it has been. Minus one health isn’t going to prevent the fact that these two champs ALWAYS flip. It’s strong on the curve and boasts punishing interaction with its 65.4% win rate. And don’t forget, they play with your cards too!

Alright, finally a newer deck is ready to take the spotlight. Taric Pantheon had a decent initial week one showing, but Kennen Ezreal was always there to shut it down. The constant stuns and recalls gave the deck a really difficult time… But that’s about to change!

Taric Pantheon takes the lead with a huge 72.4% win rate! With Kennen Ezreal taking a huge hit, the deck’s become far less prevalent. We’ll have to see just how things shape up as players adjust their lists and play patterns accordingly. Regardless, Taric Pantheon looks to be in a great spot for the near future! 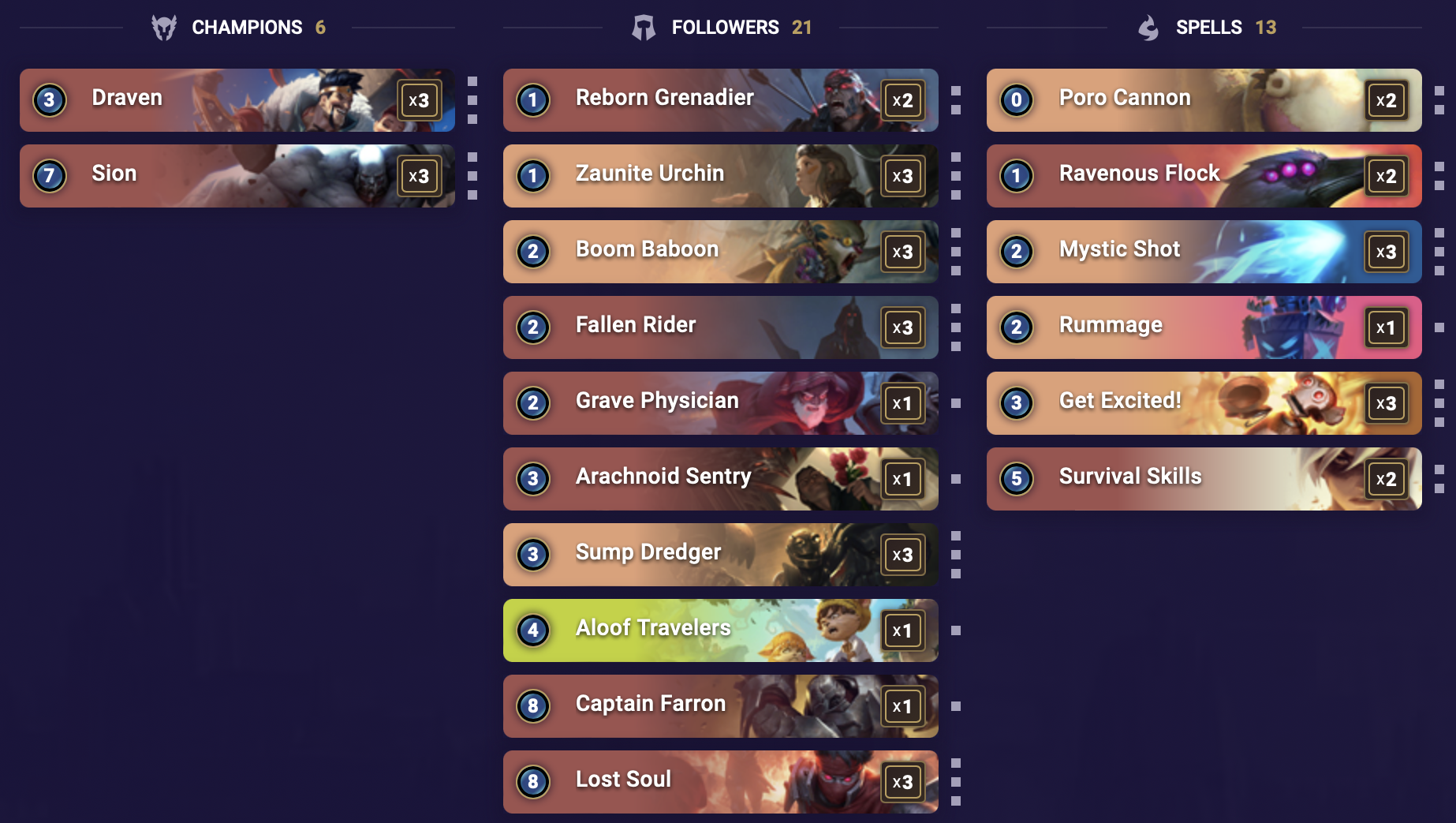 Once again on the list of tried and true, we’ve got Sion. The nerf to Poppy put Bandle City as a region on the decline, which means we’re seeing less Minimorph. That’s a big plus for a deck that wants to close the game with a huge Overwhelm swing.

It looks like Ravenous Flocks have made their way back into the list to give the deck more interaction. Its play patterns are still undoubtedly strong as shown by its 69% win rate. Did we forget Lost Soul is a card?

A bit of a newcomer to enter the scene, it’s Caitlyn Ezreal. We’ve seen similar lists in the past come along to combat the nerfs to old Ezreal Draven. Caitlyn fills the role of a 3|3 Quick Attack for three, plus her Flash Bombs are quite useful. There’s a decent amount of targets we can hit, but more importantly, it helps set up Flocks and Scorched Earth.

Overall, it’s the classic PnZ Nox Tri-Beam deck. It’s currently holding a solid 65.2% win rate, so if you’re a fan of Ezreal Draven, this may be a deck worth trying. 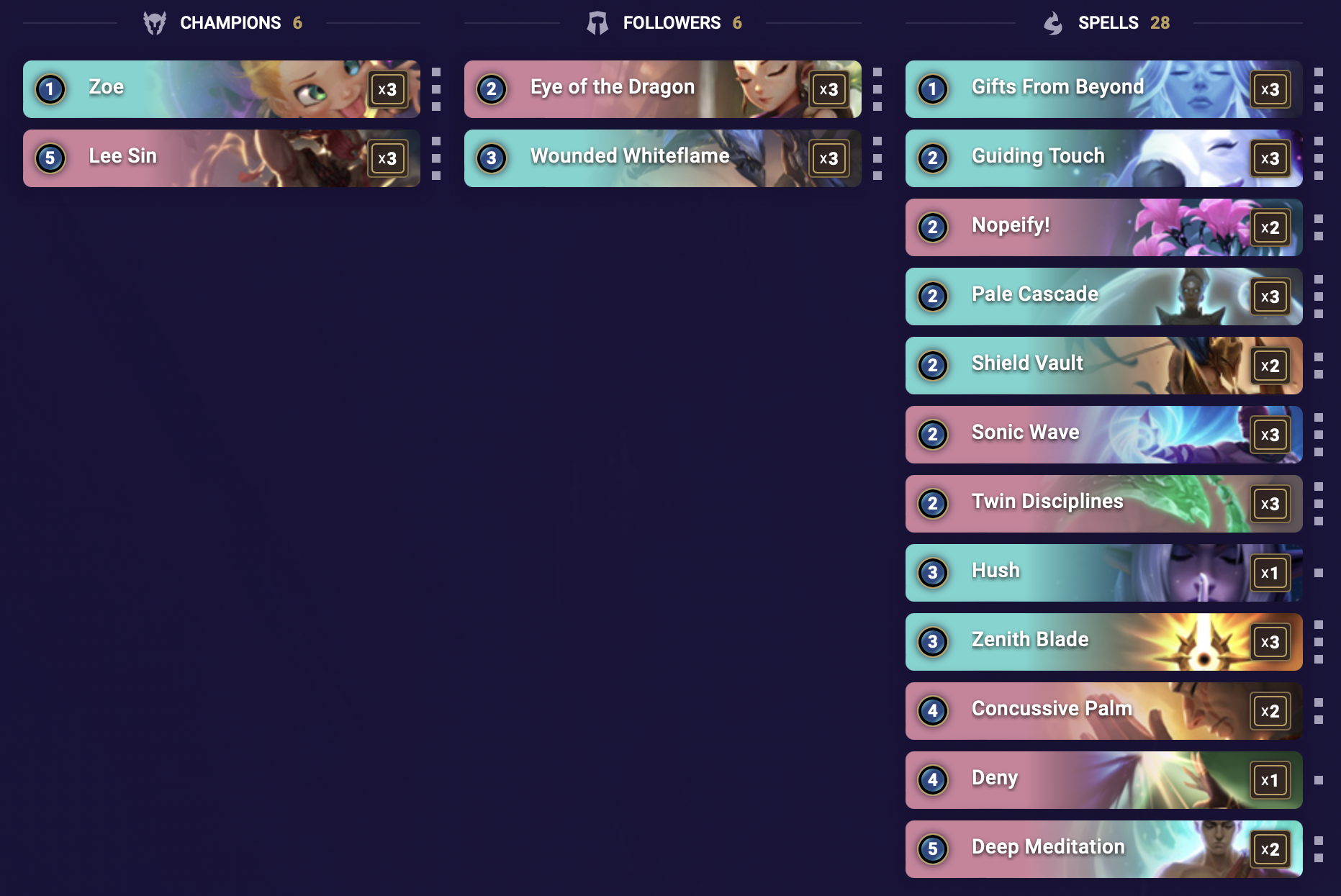 Lee Zoe got a huge buff since the latest expansion. It turns out Wounded Whiteflame is busted in more decks than just one, who’da thought?

Jokes aside, Wounded Whiteflame gives Lee the early to mid game stabilizer is always needed. Not only does it have Eye of the Dragon, but now it can outright build a threat from the get-go. That’s on top of the OTK potential the deck always had. Zenith Blade just became insane with its new perfect target.

While 60.9% isn’t quite as high a win rate as some others, that’s accounting for all its pilots. If there’s ever a deck with an incredibly high-skill cap, it’s Lee Sin. Put in the practice and this deck will work wonders for you!

Alas, here we are, back to Kennen Ezreal. It frankly just made the cutoff by holding up a 55% win rate. Considering this is another high-skill cap deck that just took a major hit, it’s still showing some real potential.

It may take some time for us to discover the next best iteration. Since Kinkou Wayfinder can only pull one Kennen, there’s a chance we’re better off recalling another unit five times instead. Dancing Droplet is the obvious fit and does offer some new play patterns to the deck.

Enjoy the fact that there will be far fewer auto-win Kennen hands, but we’re far from writing the deck off completely.

Roadblocks may slow us down, but there’s always a path forward. Sometimes we just have to sidestep a bit to find it.