6 Fun LoR Decks To Play During the Holidays

6 Fun LoR Decks To Play During the Holidays

Wow! The last article of 2020. Don’t think that we would leave everyone without some spicy decklists to play before we return in 2021.

In this guide, our Glimpse Beyond writing team of Swim, NicMakesPlays, Precipic, Kuvira, Rattlingbones, and myself, Silverfuse, have composed a list of the decks we plan on playing this holiday season:

Be sure to check out the lists and general tips for them as well as messages from the writers at Glimpse Beyond.

If you’re interested in joining our writing team in 2021, stick around for dpmlicious’s message

We hope that you have a lovely holiday season and can’t wait to produce more articles in 2021! 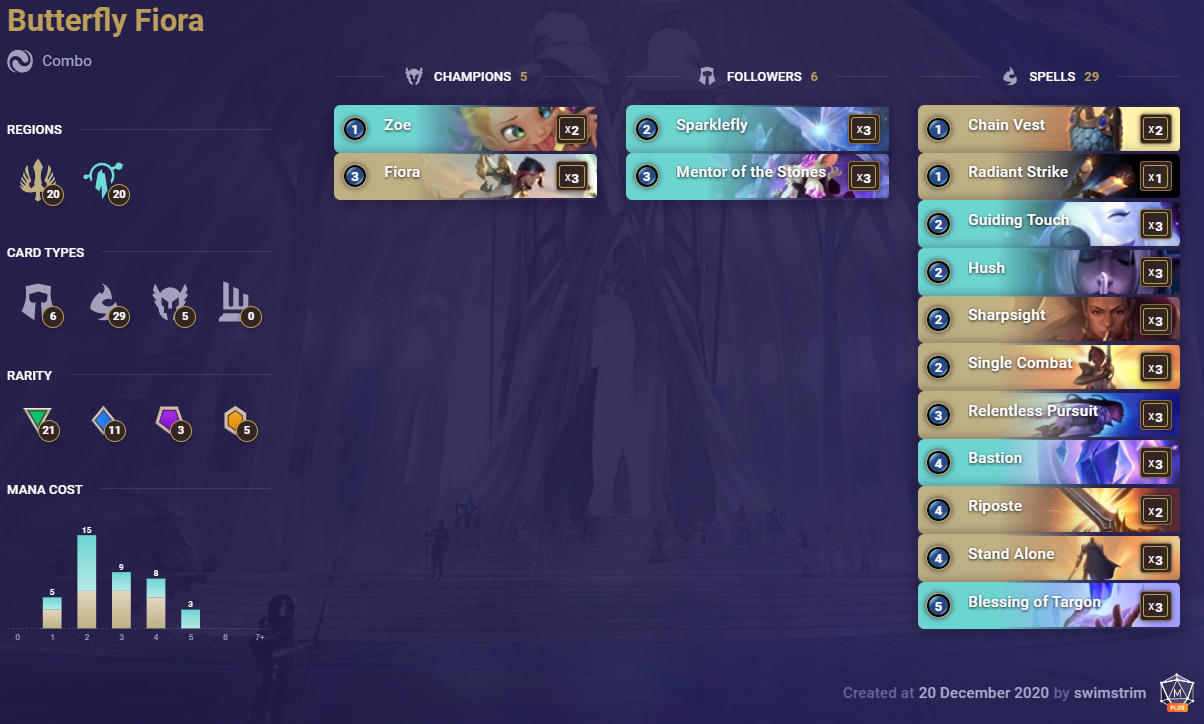 This deck is built around drawing either Fiora or Sparklefly by turn 3-4, then buffing/protecting it to win you the game.

If you full mulligan for both cards, you have over a 90% chance of drawing them, and almost no deck can beat you if you play carefully and keep both cards alive.

This deck is especially good against any aggro deck because they lack interaction and Butterfly Fiora is the ULTIMATE solitaire deck; you can beat any deck that doesn’t try to stop your units directly.

If you don’t have Sparklefly or Fiora, mulligan everything. If you have one or the other, plan out your first 4 turns and decide what additional tools you’ll need. 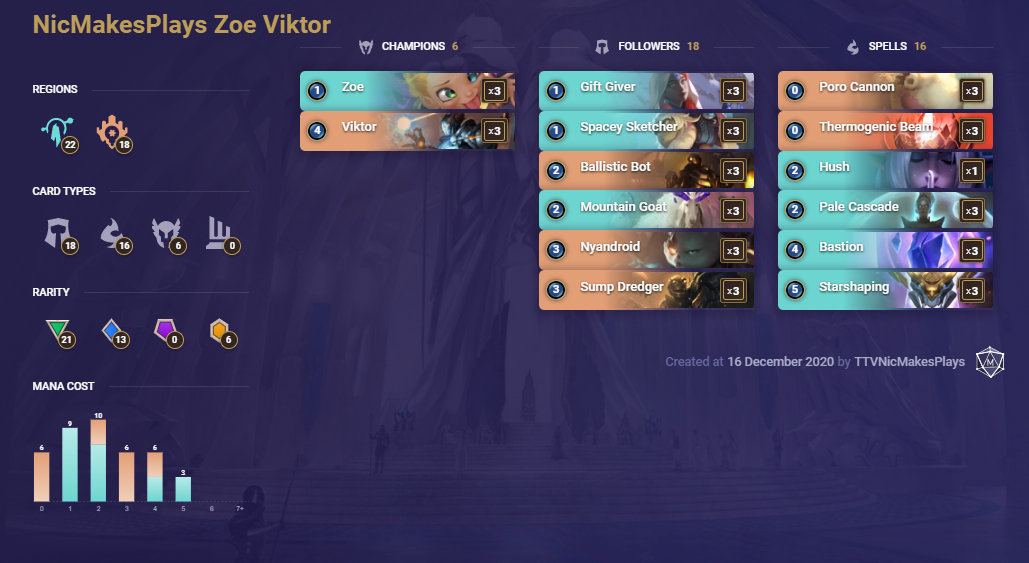 This deck generates advantage through discarding Ignition and Gems while threatening multiple win conditions. This deck can win through Zoe’s level up, Viktor, Nyandroid, and high cost Celestials off of Starshaping.

You start the game by playing Zoe, Gift Giver, and Ballistic Bot to add cards to your hand, then you can discard them with Poro Cannon, Sump Dredger, and Spacey Sketcher. This begins to generate advantage for you while also giving you created cards in the process for Viktor’s level up.

Once you’ve generated advantage over the first few turns, you can work towards Zoe’s level up. You can also advance your gameplan by summoning Nyandroid and start buffing him and also start generating keywords with Viktor.

It is hard for the opponent to deal with all the different win conditions and you can always find your way to finish them off.

Bastion helps a lot to protect your win conditions as well, in general, I think this is one of the most fun decks in the game.

In this deck, I always mulligan for Zoe or Gift Giver on turn 1, and Ballistic Bot or Mountain Goat on turn 2.

These cards allow you to start generating advantage right away, leveling up Zoe, leveling up Viktor, and create cards for Augment as well.

On turn 3 you want Sump Dredger or Spacey Sketcher to start making use of the discards. Thermogenic Beam and Hush are there because they are versatile and can answer threats in a lot of different scenarios.

This deck is a blast, I hope you have fun with it! 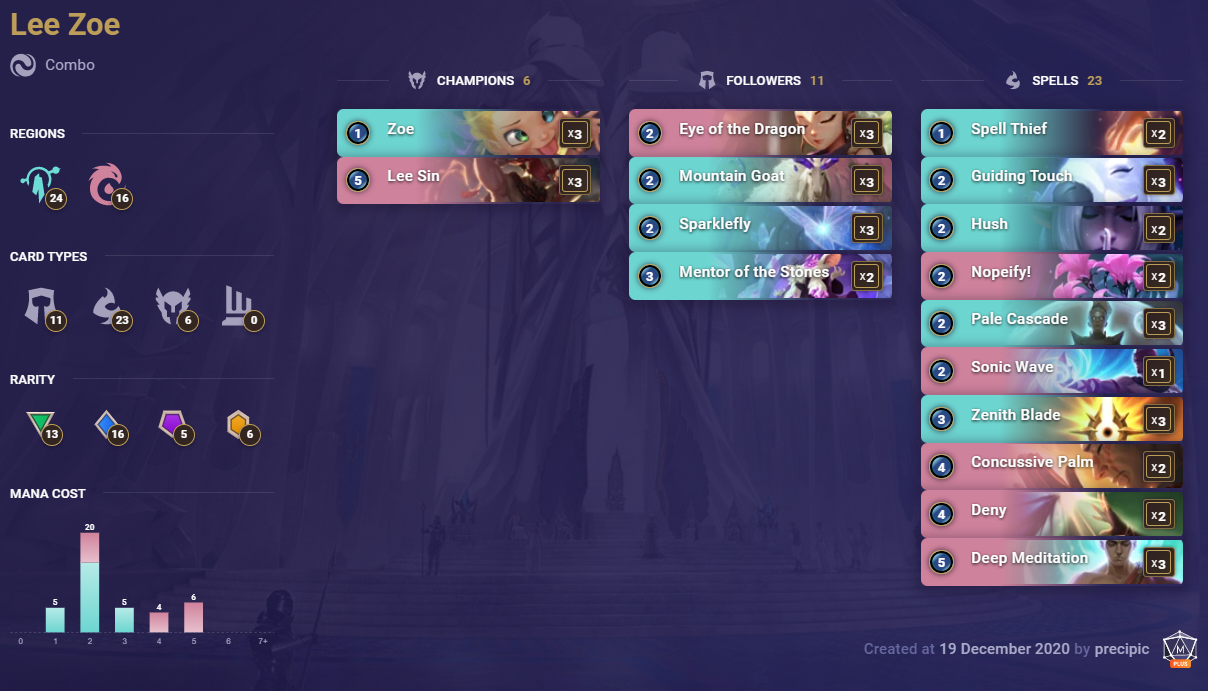 This is basically an updated version of the Lee Sin Combo that looks to play for Zoe’s level up instead of pressure with Zed.

Zoe’s Super Cool Starchart is a pretty powerful spell in a Lee Sin deck because it triggers your Eye of the Dragon, Deep Meditation, or Lee Sin and then gives you access to cards that can help keep either you or your units alive.

Beyond this, if you ever level up Zoe in this deck you aren’t going to die. Both Eye of the Dragon and Sparklefly give Lifesteal and a Lee Sin with Lifesteal will basically always heal you to full.

This is also another Sparklefly deck that abuses how strong this unit is with buffs and plays her with Mentor of the Stones, Zenith Blade, and Mountain Goat to ensure that you never die.

In general, you just need to mulligan for some sort of threat. Whether it be Zoe, Sparklefly, Mountain Goat, or Lee Sin. From there, you want to grab whatever protection is best for the matchup.

Nopeify! and Deny are great against Go Hard decks, for example, Concussive Palm is great vs Plaza Decks, and Hush is great against opposing buff decks. 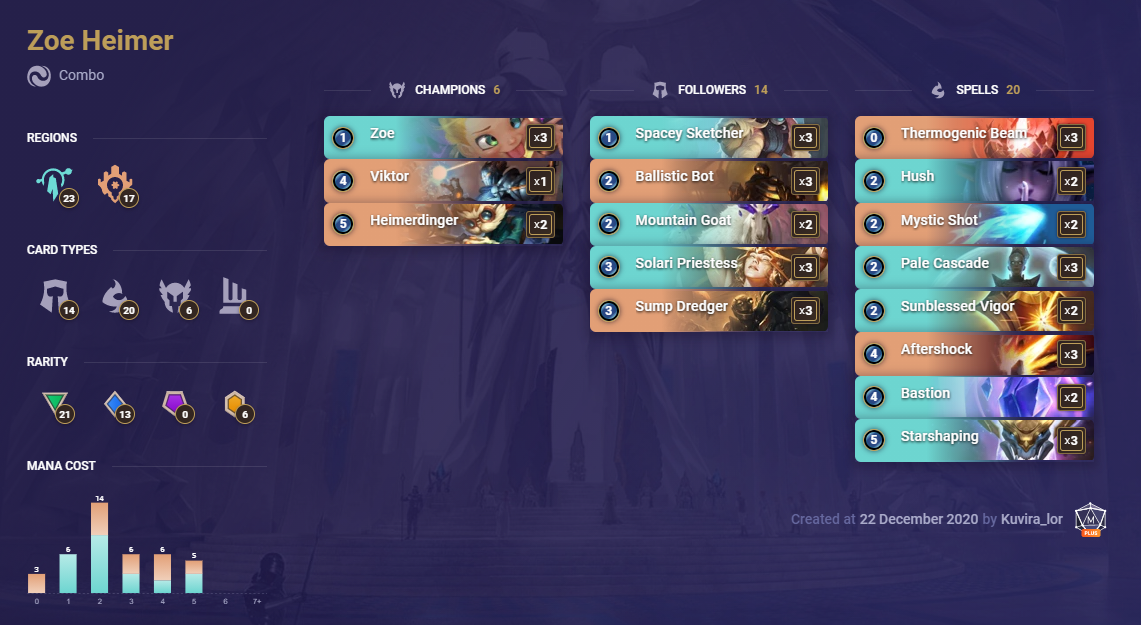 This is definitely the deck that I’ve had the most fun with so far. It’s somewhat of an updated version of Heimerdinger and Vi. Instead, it uses Zoe and Viktor and other new cards.

It’s a combo/midrange deck that plays around getting value early game off of Zoe, Spacey Sketcher, Mountain Goat, and Ballistic Bot.

For example, Ballistic Bot turn 2 into Sump Dredger turn 3 discarding the Ignition will draw you a card basically for free.

Mountain Goat can accomplish the same combo if you get the Gem. Invoke cards like Solari Priestess and Starshaping are amazing flexible cards. The Comet is a great removal spell. The Sisters are good vs matchups like Ezreal Draven.

Written in Stars will get you Heimerdinger, Viktor, or a 0 mana Zoe. The other celestials are also usable depending on the situation. Thermogenic Beam, Mystic Shot, and the new card Aftershock are your other removal cards. Hush and Pale Cascade are overall amazing Targon cards that hit different matchups and will always find value.

Starshaping is the main finisher in this deck which can be used to create The Great Beyond, The Immortal Fire, or even The Destroyer to close out games.

For the mulligan, it’s safe to keep 1x every unit but Heimerdinger. Ideally, only keep Sump Dredger if you have something to discard, like Ballistic Bot’s Ignition or the Gem from Mountain Goat.

For spells, keep Thermogenic in matchups where you need removal early like vs burn aggro or Demacia decks. ALWAYS keep Aftershock vs The Grand Plaza decks.

Have fun and enjoy your holidays! If you guys have any new spicy deck ideas, just dm me on Twitter or Discord. I’m always down to take a look at them. 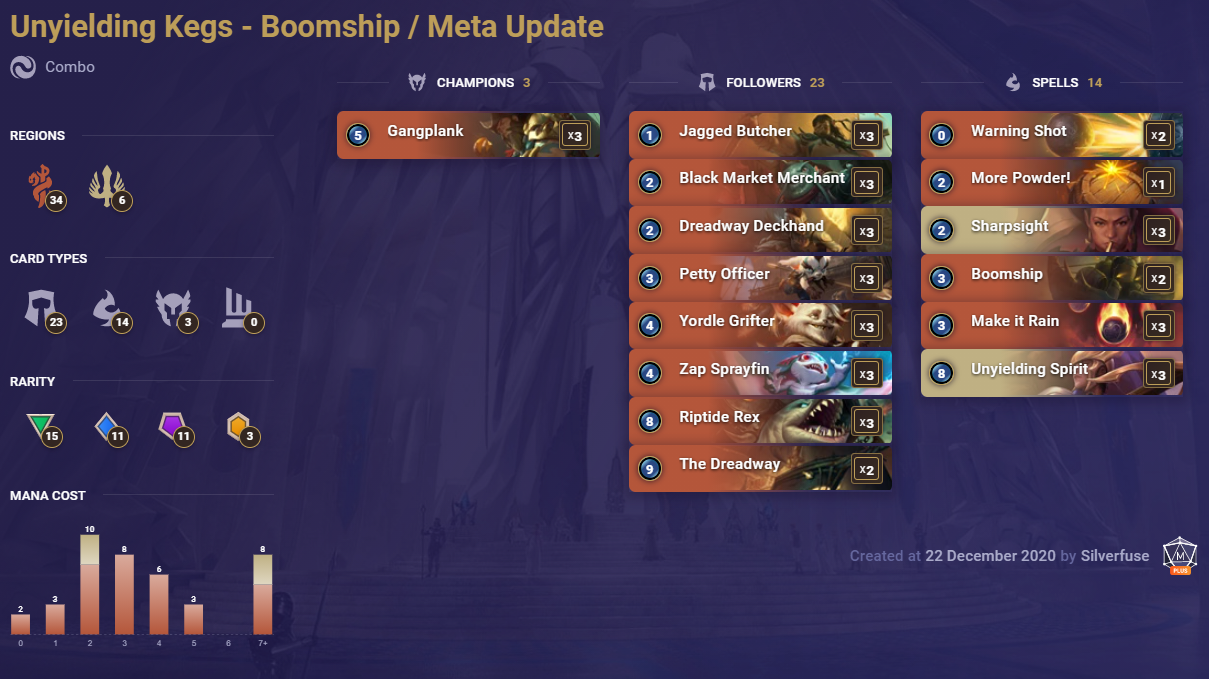 I have had a blast with Unyielding Kegs ever since Unyielding Spirit came out. It is hilarious when the combo for it goes off. The idea of the deck is to play Unyielding Spirit onto a Powder Keg which will prevent it from dying when it does damage.

This allows you to stack multiple Kegs and have huge end game finishers. One of my favorites is Riptide Rex. Generally, each Cannon Barrage Shot does 2 damage a hit, but with Unyielding Kegs, each shot might do 5+ damage per a shot which typically ends up obliterating your opponent’s Nexus.

The list also uses a new card from the last expansion, Boomship. The card itself is a bit slow even for this deck, but it does allow you to stack up even more Kegs while doing a bit of damage as well.

It is typically better to play after Unyielding has already been played on the Kegs. This is one of my favorite decks in Runeterra because of the silly combos that can be done with it and huge endgame damage.

For your opening hand, you want to mulligan hard for Jagged Butcher and Black Market Merchant. This is to keep tempo in the early game so you don’t take too much damage.

At the start of the game, you want to avoid taking damage and play defensively so you can set up your combo.

Happy holidays and I hope you have fun playing some Runeterra! I’m excited to write more spicy deck guides in the future! Good luck and have fun! 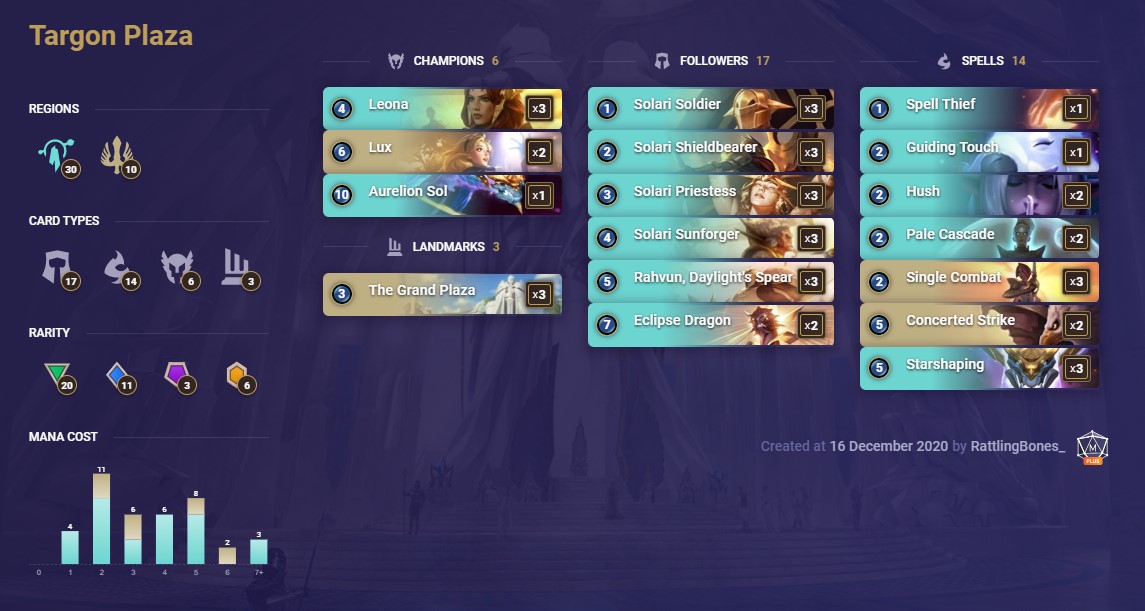 By far one of the most consistent decks you can play right now. The idea of the deck is to slowly but surely outvalue your opponent’s board and hand. This is what Grand Plaza is great at (especially with additional stats from Daybreak units!).

It lets you Challenge any troublesome unit on the board with a unit of your choosing. Not only that but we have endless sustain with Solari Sunforger in conjunction with Plaza, Single Combat, Concerted STrike, and our Starshaping.

The mulligans can be deceptive but the idea is to ensure that you’re playing for the board in each of the games/matchups that you play in. The Invokes are great for this as they give you an array of cards with different keywords.

You really do want Plaza against most of the decks you play into. The only other considerations are Shield Bearer and Sunforger into aggro and Priestess into control.

I wish you all happy holidays! See you in the new year. 🙂

Wish you all an amazing holiday season and fun times in 2021! I believe each and every one of you can achieve an amazing new goal in the coming year. Thanks for joining us this 2020.

Glimpse Beyond is looking to add to our article writing crew. If you are currently rank 200 or above in any region and are interested, details on applying can be found in this tweet:

Glimpse Beyond is looking to add to our article writing team. We write Legends of Runeterra articles on @MobalyticsHQ. If you are currently rank 200 or better in any region and are interested, the application info is in the pic below. pic.twitter.com/ddgJ1SxcmY

We hope you enjoyed these lists and maybe found something new to try over the holidays! There are so many decks to be explored with this expansion.

Have fun brewing, grinding ladder, or whatever you enjoy playing in the world of Runeterra! See you next year!

While we won’t be articles here over the holiday season, some of us will be creating content on our channels and you can catch us there.

For more decks, head to our LoR meta tier list or the Mobalytics Deck Library.