Look, not everyone can be a crazy powerful tier one deck, ok? I’m Jordan “WhatAmI” Abronson and I’m here to say there is room for all at the Runeterra table, meme, and dream alike.

Udyr might not be the broken nonsense that some of the other new champions are *cough* Gnar *cough* but the spirit shaman himself still deserves some love.

I’m here today with some spicy Udyr decks to try out if stance shifting is your jam. 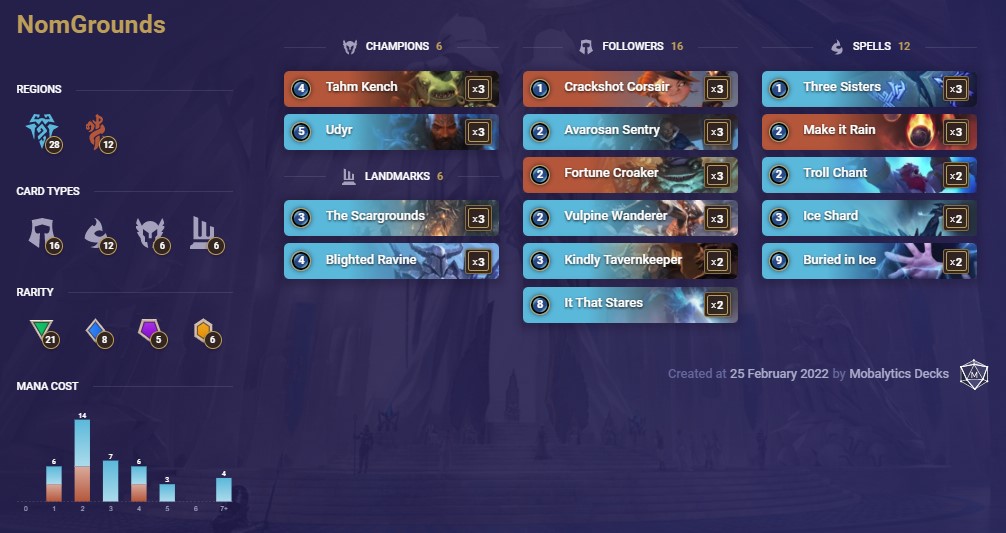 This first one is an original concept created by Mr. Sirturmund and updated a touch by me. There are a couple of different things that Udyr is planning to do in this shell. Not the least of which is potentially leveling up.

With all the different pings floating around Udyr will be at level two a surprising amount of the time. And stealing games with a giant Overwhelm man when your opponent can’t find the right answer is a time-honored tradition.

That said our main plan here is definitely with our other champion. Sir Thomas Kenchium is here, hungry, and ready to be granted Regeneration by our Stance creators. There are few things more demoralizing than watching your best unit disappear into the insatiable gullet every turn while Kench grows and grows. 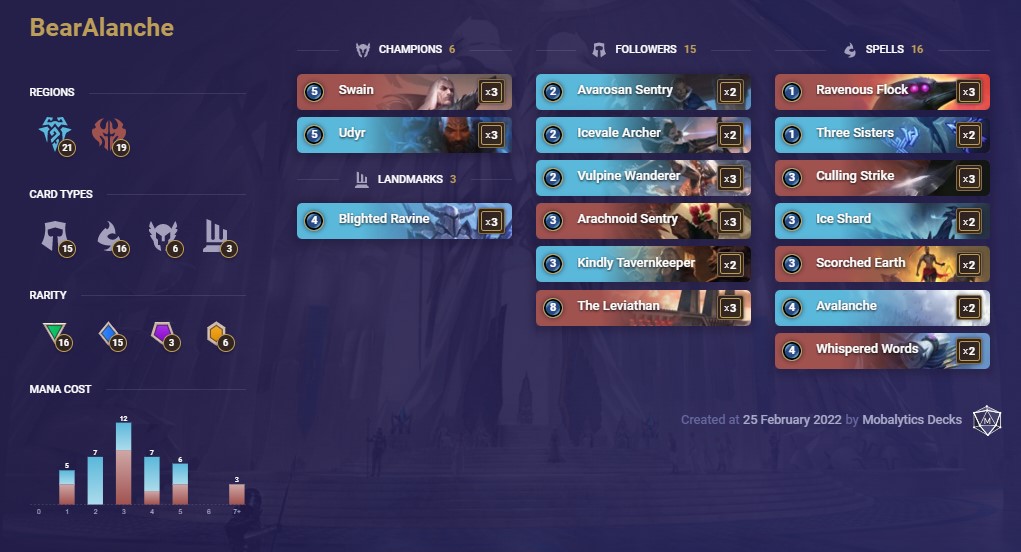 This one is probably the closest to an actual competitive deck we are going to get today. I would even probably put it solidly in low tier two, the kind of thing you could bring out for a tournament lineup, or even ladder depending on the meta.

Here we’ve got all the tools to make swarm decks cry, which is always a bonus in my book. We get to back them up with Flock as well though, which will make even the traditionally sweeper-resistant Demacian aggro decks sit up and take notice.

The only issue with this kind of concept is the fragility of its late game. Against any other kind of control deck or even some midrange, we are simply not going to be able to keep our foot on the gas pedal for very long if they can answer our first set of large threats.

All that said you can steal a surprising number of games just by locking down your opponent’s board with the Swain/Leviathan combo. Udyr here plays more of a supporting role. You’ll generally just be using him to spam Ice Shards, but every once in a while, Overwhelm on Swain can do some quite silly things. 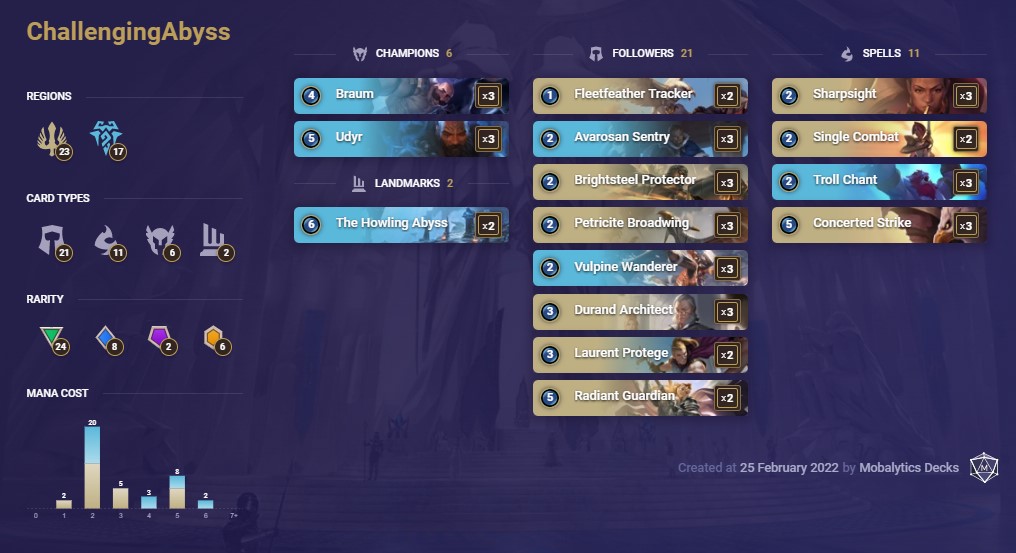 I mean, if we’re already going to be trying for one meme then we’ve got to ask ourselves how many we can cram into one deck at some point, don’t we? This one has got quite a few so hold on.

The first and most obvious is ARAM itself. Card draw is hard to come by in these regions, and very little is more fun than spamming leveled champions until your opponent falls over. Sounds like a solid way to end a game for a board control-based deck to me.

Secondly is Udyr, still doing his best. Enough said. The third is Braum, working together with the power granted by stances or Durand Architect to take down even the largest of threats. Braum will level in this deck way more than he has any right to due to the support of the Stances, Sharpsight, and Troll Chant.

We round out the deck with the slightly less meme-worthy additions of slapping regeneration on Petracite Broadwing or Radiant Guardian to completely shut down other midrange or aggressive decks. Try attacking now bub, good luck. 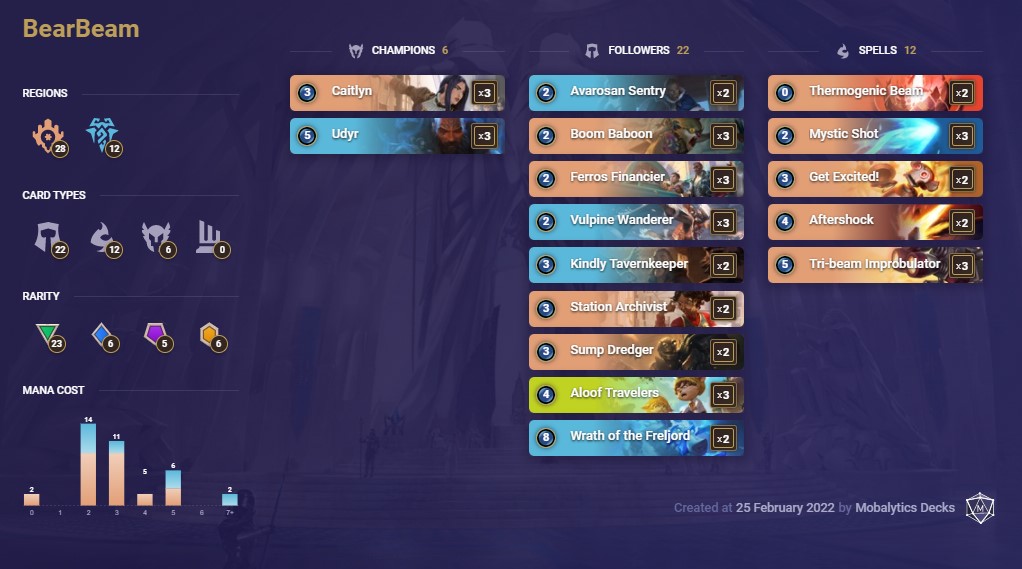 Again if we’re going to get silly with this I’m going to lean into it. What does Mr. Aphelios tell us we do with champions that make three mana spells? That’s right, we slam them in Tri-Beam decks and try to make the most ridiculously oversized beams we can.

For all the silliness though this will play a lot like other Piltover and Zaun midrange decks. We’re looking to slowly generate card advantage, answer our opponent’s most problematic threats, and grind them out of the game. There’s also an awful lot of reach packed in here, remember that Ram Stance also goes face.

We can also steal some games as always on the back of a large Overwhelm Udyr, or with our Captain Farron replacement, big piggy himself. Having a play on turn eight against Bandle City decks that reads “Minimorph me or Lose,” is not a bad place to be in.

With that, our solid card draw to keep up with them, and Aftershock for pesky Landmarks, I would not be surprised if some version of this deck demolishes Bandle Tree….. It might be a version with some different champions, but let’s not talk about that, on to the next Udyr deck! 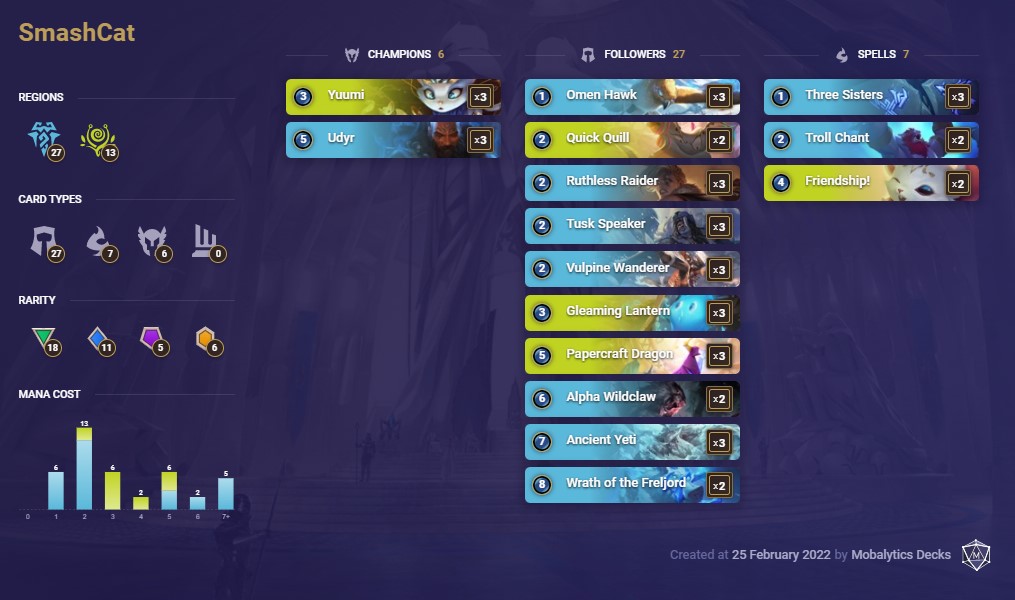 You know what I said about stealing wins with large Overwhelm units being not the worst place in the world? Well, this deck is going to exemplify that theory. And we’ve got the tools to make them even larger and double-strikier than even with Attach here to back us up.

Tired of losing to running out of cards due to pesky Vengeances? Never fear, we can churn out giant lads turn after turn. Almost every card in this deck is a buff effect or a beater. We even once more top out at Wrath of the Freljord to make blocking us down even harder.

Papercraft dragon might be cheesy, but it’s a powerful cheese and one I am ready to sign on for. Even on the smallest of our Overwhelm units, we’re shipping in five or more power of double-strike Overwhelm damage. That’s nothing to try shaking a Pokey Stick at.

This variation will have problems with the more aggressive decks the others are tuned to be ok into. That said, it will pack significantly more power against people trying to take the game slow and steady and we can stick in there with them the whole time.

I’ll reiterate what I said at the beginning. I don’t think it’s likely that Udyr has a Tier One deck.

Or if he does it’s going to take a brewer of greater power and fortitude than I to find it.

That said, there are a handful of fun if slightly meme-y brews out there that are worth the time.

If Udyr is your boy, go forth and smash, and may the spirits of the Freljord have your back.