5 Rise of the Underworlds Budget Decks for Newer Players

5 New Budget Decks for Rise of the Underworlds

Hey it’s Trevor “Shugo” Yung here and today I’m bringing you five new budget decks to try out during the launch of Rise of the Underworlds.

In Runeterra, the powerful cards come at all rarities.

You can do a lot with little, so if you’re just starting out and have a small collection then look no further! 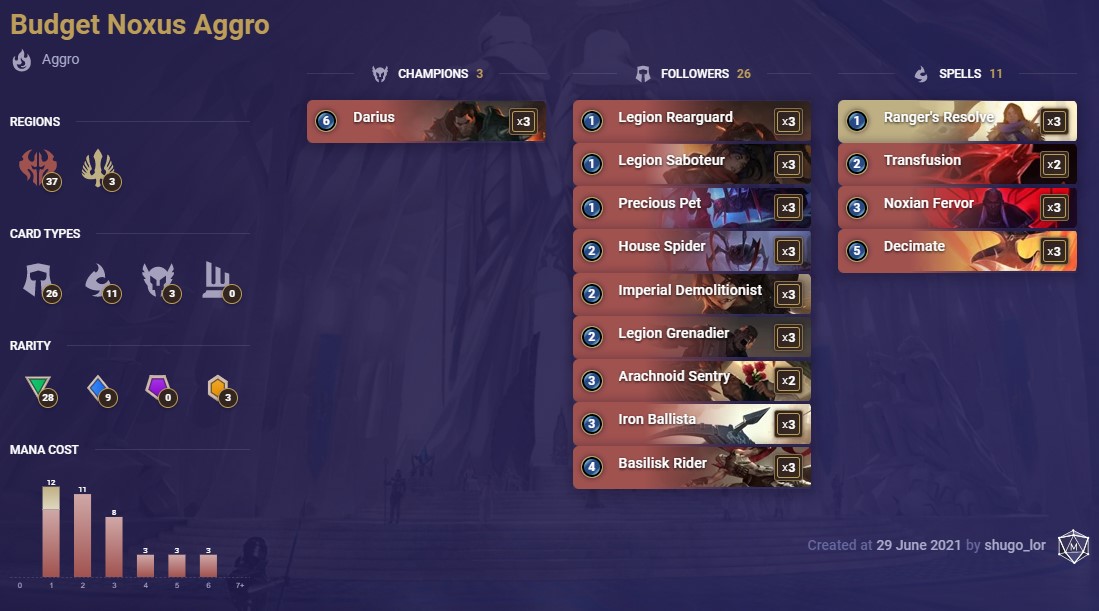 First up we have a powerful deck of the past. We’re deep into Mono Noxus Aggro to allow us the ability to consistently play Basilisk Rider.

While not quite as strong as it’s pre-nerf 6/4 version, a four mana 5/4 Overwhelm is still a big threat.

Just like any other aggressive deck we’re focused on our early game one-drops and two-drops. We have an onslaught of Overwhelm attackers to make blocking difficult for the opponent.

Then as we approach the finish line, Imperial Demolitionist, Noxian Fervor, and Decimate will burn them out!

When building for Allegiance, we do have the option to run a few off-region cards. Ideally it helps to choose something with a lower cost that is worth keeping in your opening hand.

This way, finding the card in your mulligan will reduce the odds of missing your Allegiance later on. Ideally, try not to splash more than 3-4 cards from another region.

The card we’re splashing for is a game changer. Ranger’s Resolve is one of the hardest cards to play around and can make an insane impact for just one mana. It can help us survive combat when we’d otherwise trade, or keep units alive from removal to push that extra damage to the Nexus.

As a couple bonus corner cases, you can use Ranger’s Revolve + Transfusion in order to target a one health unit with the self damage ping while keeping it alive. This also works well alongside Imperial Demolitionist. 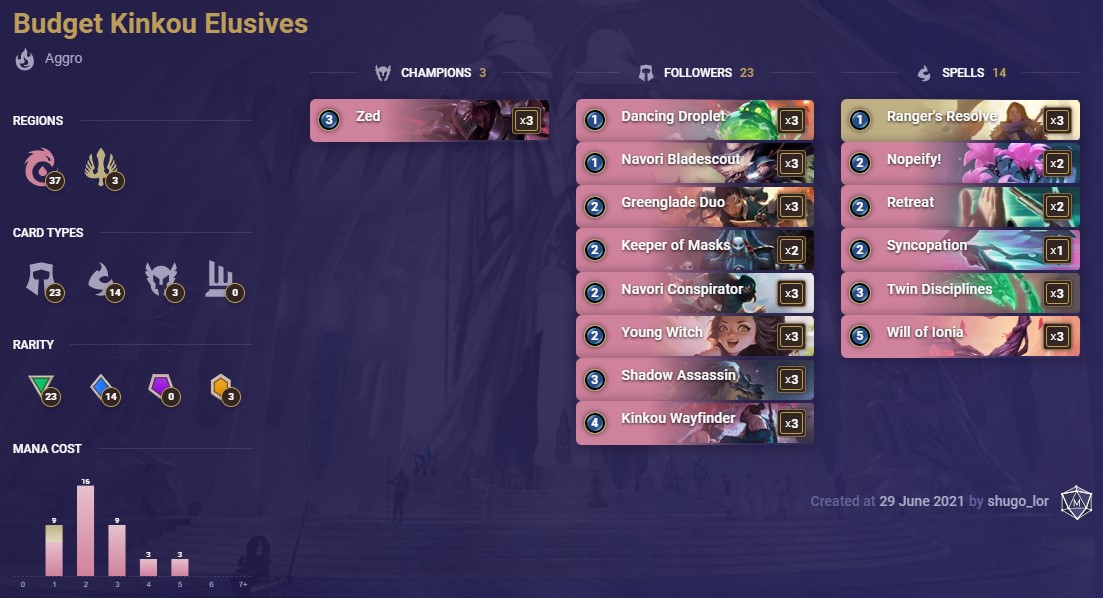 Next up is the revival of Ionia! We’re deep into their original strengths of the past and focusing primarily on Elusive units. When your opponent can’t block you, but you can block them, the game starts to feel rather unfair. If this sounds appealing then this may be the deck for you!

Kinkou Wayfinder is our power play that gives us three bodies for only four mana. Assuming you don’t miss the Allegiance trigger, you’re guaranteed a 2/3 plus a combination of Dancing Droplets or Navori Bladescouts. With Greenglade Duo on board you’ll get three buff triggers while filling your board to set up Keeper of Masks. 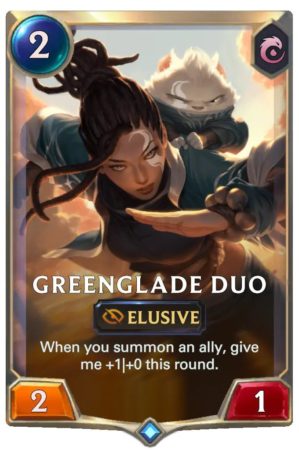 We’ve brought Ranger’s Resolve once again to help protect our units from removal. While our units won’t actually fight much in combat, a lot of them are quite fragile. The buff to Make it Rain is a big deal. With all our one health followers, it’s not a card we want to see. So having Ranger’s Resolve will help avoid being blown out by those efficient pings.

Ionia got some fantastic buffs and gained new core spells. Will of Ionia is back to it’s former four mana glory and will function as a sort of “catch-all” removal for the deck. Then we get Twin Disciplines for only two mana! With this huge buff to its efficiency, we no longer need to rely on Freljord for its combat tricks. 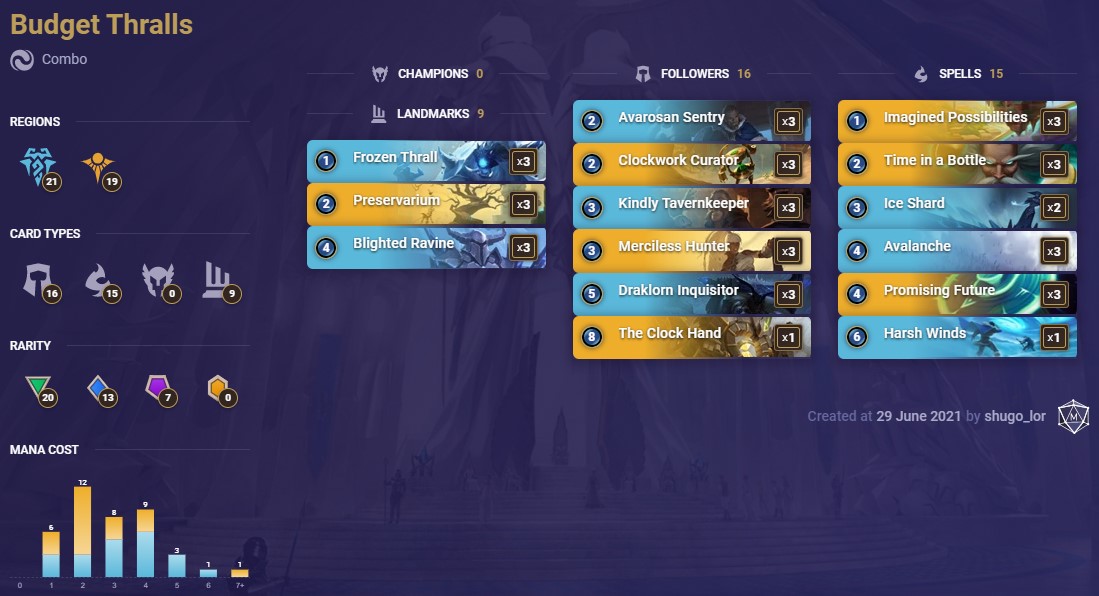 Thralls as an archetype actually doesn’t require much to be built. While Lissandra may help the added consistency of getting a Thrall, the overall game plan wants to be playing a Frozen Thrall on turn one anyway. Taliyah wasn’t fully necessary either as she was effectively our fourth and fifth copies of Promising Future.

I’m not going to say this deck is better without them…but I do think it’s certainly playable!

Mulligan all-in to find that Frozen Thrall. If you don’t see one in your opening hand, keep NOTHING. Countdown as a mechanic means that every single turn is relevant. We need our Thrall from turn one, so throw away everything and try to find it.

Despite being a Thralls deck, we are a bit lacking in the actual Thralls themselves. Without Lissandra we only have Frozen Thrall and Draklorn Inquisitor. So to help compensate, we’ve added in Imagined Possibilities.

While this won’t guarantee finding another Frozen Thrall, it could potentially give us a Preservarium or Blighted Ravine. It can also Advance that final Countdown in a pinch which could make all the difference.

Worst case if we have a slow draw we can fall back on our newly buffed big guy, The Clock Hand. This card was already fringe playable as a top end finisher that could summon any lingering Thralls. Now with a +3 attack buff, The Clock Hand can now dish out some damage itself! 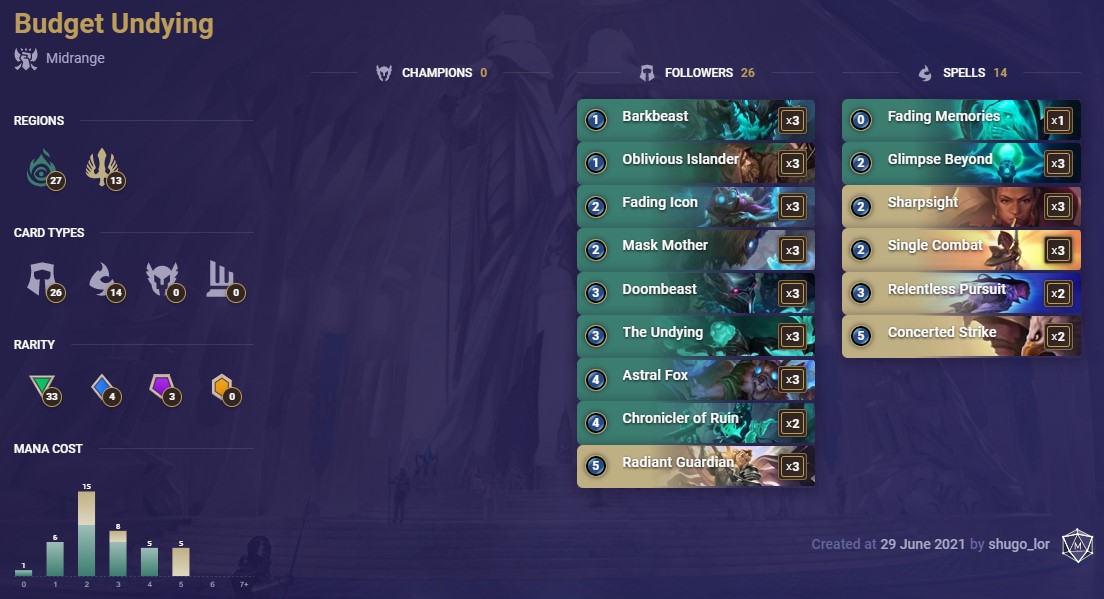 This deck is focused around the core of its namesake, The Undying. It’s been a while since this archetype was explored, but we have a couple new tools and interesting mechanics that give it potential to be fun and powerful!

Oblivious Islander is here to let you play The Undying on turn two. In addition, it will gain Ephemeral for the round which kills The Undying to come back as a 3/3 by turn three!

Mask Mother is also great here as it can eat The Undying to gain its stats, while yet again triggering the revival and stat growth next turn.

Apart from silences, this is a pretty hard combo to interact with. So take advantage of the raw power and put on the aggression! 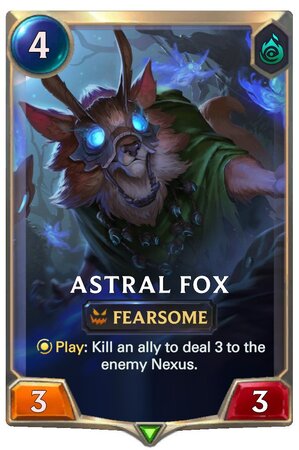 Due to The Undying’s inability to block, there are times we need to race down their Nexus. Our old pal Doombeast and new friend Astral Fox are sure to do the job nicely…or rudely…that’s up to you!

The Demacia package brings us some interaction with Single Combat and Concerted Strike. We don’t care if The Undying dies, so these are a great way to deal a lot of damage at little cost. Radiant Guardian helps protect us while Relentless Pursuit let’s our Undyings threaten huge damage even on our defending rounds. 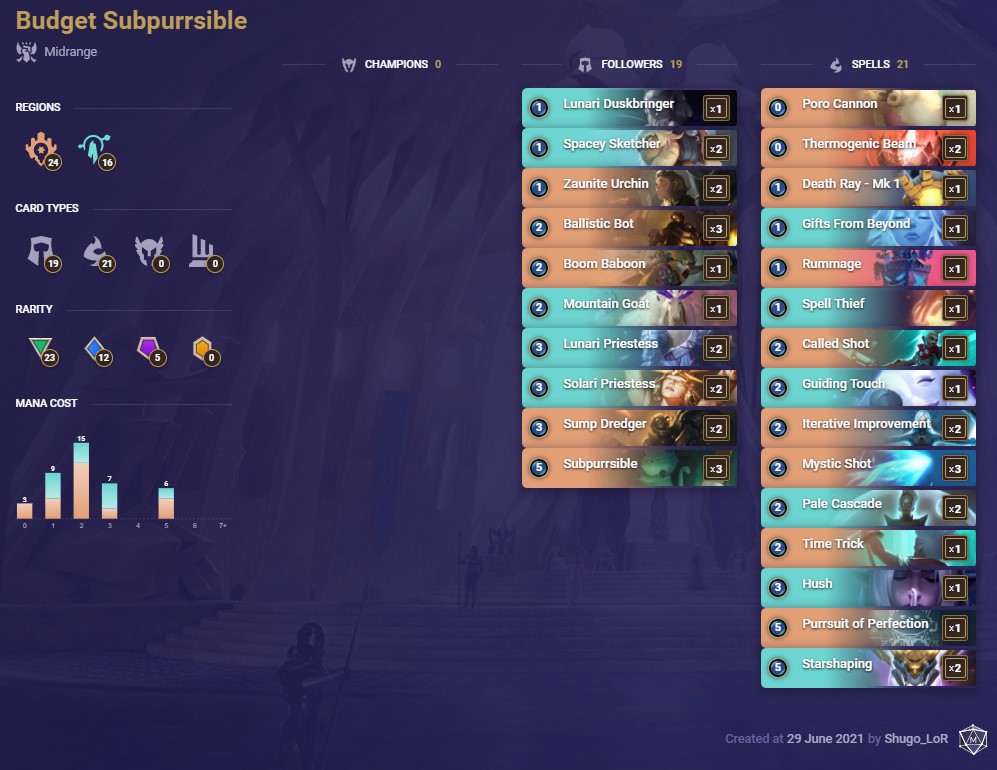 Okay, I know this looks like a complete mess of a deck but just trust me on this one. You see, the combination of PnZ + Targon is very flexible and allows you to have a less committal build. We’re basically a Zoe Vi deck without the champions, but with more emphasis on hitting the 10 unique card threshold faster. This is very possible.

In order to make this work, we’re centered around cards that generate other cards. We have multiple token spells which can be played standalone, or ditched as discard fodder. The majority of the deck gives us two unique named cards from just one card in the deck, or will help us draw into more.

Due to our flexible nature you’re welcome to change up some of the 1-of’s. I would recommend keeping the core 2-of’s and 3-of’s as they aim to smooth out the deck’s consistency. Zaunite Urchin and Sump Dredger cycle our discard fodder. Spacey Sketcher, Lunari Priestess and Solari Priestess generate valuable Invokes. Thermogenic Beam and Mystic Shot are our most reliable removal.

Play the game for tempo and build up your unique cards. Then end the game with a combination of Subpurrsibles and/or Iterative Improvements. If that’s not enough, Starshaping can help us go the extra distance with threats like The Great Beyond. Or if we’re truly deep enough, get ‘em with that Purrsuit of Perfection!

Waking up early can be difficult. Regardless of any good habits we’ve built, the reality of life can eventually get in the way.

Try this. When you first wake up, do something you enjoy. Choose something you truly want. If you don’t have enough time in the morning, wake up a little earlier.

When we treat ourselves in exchange for our early commitment, we’re immediately rewarded for our good habits. This will help reinstate our behaviour and make it easier in the future.