How to Play Against Vayne

How to Play Against Vayne (6 Tips)

As she is played and banned so often, now’s the time to learn how to counter Vayne so you no longer have to ban her!

Even though Vayne is most commonly played in the bottom lane, she sees play in top and even the mid lane too.

Some of the tips in this guide will overlap and help you play against Vayne in other lanes as well.

If you want to check out a guide specific to top or mid Vayne, check out her champion page.

How to play against Vayne:

1. End the game as quickly as you can

Vayne is one of the best champions in the later parts of the game. The more gold she gets under her belt, the stronger she will become.

With lots of gold, XP, and a full build, she lives up to her saying of “I bring swift death” as she’ll be able to take down the strongest of targets quickly.

One reason why she is so strong in the late game is that her W deals max health true damage. This means she will shred targets in late game team fights.

Not even tanks are safe against her and she’ll be able to kill them with ease if she can proc her Silver Bolts.

Try your hardest to end the game as quickly as you can as the longer the game goes, the harder it will be to contest and beat her.

However, if the game lasts for a long time, use the rest of the tips in this guide to make it slightly easier to beat her in the late game.

2. Avoid standing near walls during the laning phase

Try your hardest to stand in the middle of the lane or in line with the Vayne.

If you stand near the walls, she could use her Condemn and push you into the wall itself: pinning you to it and stunning you. She could then use this opportunity to kill you or set up her Jungler as well.

Standing away from any wall will make it impossible for her to stun you, which is very important in lane.

Take note that she can still use her E to knock you back and escape a trade, but being knocked back and not into a wall is better overall, as being pushed into a wall will also deal bonus damage to the pinned target.

Standing in the middle of the lane has the added benefit of making it easier to dodge skill shots such as Morgana Q, Blitzcrank Q, and Nautilus Q as there will be minions in between you and the enemy Support.

3. Wait for her to use her Q before using hooks, skill shots and CC

When playing champions such as Blitzcrank, Nautilus, Pyke, or anyone who has any form of major skill shot that is a CC tool like Zyra or Morgana, try to bait out Vayne’s Q before using this tool.

If Vayne has her Q available, she can easily use it to dodge the incoming ability. While your skill shot is on cooldown, you’ll have little threat in lane and may have to play safe until it’s back up again.

She may also use this opportunity to trade with you knowing that you may have nothing to stop her from preventing an all-in.

If you can, look to use these abilities after she has used her Q. Many Vayne’s will use their Q to last hit minions, so that allows you to play aggressive.

Alternatively, try to get as close to Vayne as possible to give her less time to react to your incoming skill shot. Using a skill shot from close range generally makes it easier to land.

This should, in theory, make it easier to land your CC tool.

4. Avoid dying to her early

Vayne needs time to come online. If you can give her free gold by dying to her early, you will only allow her to reach her power spike earlier.

Once she gets a kill and extra gold, she will recall with a better item that could allow her to steamroll you and kill you over and over again.

Additionally, it also provides Vayne with gold and XP which is a big benefit to her.

Try and avoid dying to her in the early game by limiting how many risky plays you’re making and avoid over-committing unless you’re way more potent than her.

Vayne has a relatively low range in comparison to some other ADC’s like Caitlyn or Ashe. Vayne has 550 range while champions such as Caitlyn has 650 and Ashe or Senna have 600.

This significant range advantage allows you to abuse her and harass her while she tries to last hit minions. 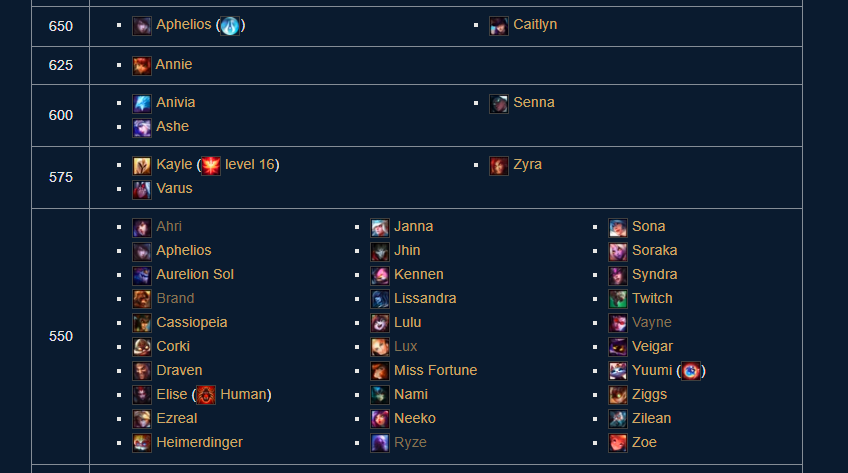 List of champion Ranges. Find out more information via the LOLWIKI.

Every time Vayne tries to secure a last hit, she will be locked in auto-attack animation. This can provide you with a perfect opportunity to harass her with your basic attacks.

Two additional ways you can abuse her low range is by keeping the minion wave closer to your side of the map and then zoning her away from the minion wave with your superior range.

Alternatively, you could look to push her into her tower and poke/harass her while she struggles to pick up what farm she can.

Pushing her into her tower is an excellent way of playing against Vayne if you’re ahead as you can get tower plates while you harass her, which will increase your lead further.

If you want to push her into her tower, use your abilities on the minion wave and constantly auto-attack minions.

If you want to freeze and zone her, you need to make sure that she has more alive minions in lane than you do.

Then, you position yourself in front or inside of the minion wave and harass her whenever she walks up to farm.

6. Lock her down with CC

If you’re able to lock Vayne down with CC in team fights, she will be unable to reposition or get many Silver Bolt procs off. This is a really good way of countering Vayne as she will not dish out a lot of damage if she is immobilized or collapsed on.

Luckily for you, Vayne will often Tumble forward and put herself in harm’s way. With this in mind, you can collapse on her while she is overextended and no longer invisible.

If multiple champions focus her, she may switch targets which means that will she will reset her Silver Bolts (meaning she will deal less damage in a fight).

You also have the added advantage that many Vayne’s will try to 1v5 in late game team fights and pretend they’re Gosu.

Try to pick champions with lots of CC tools that are easy to hit. The more CC you have, the harder it will be for Vayne to escape or clean up a fight. Champions and teams that are good against Vayne are:

There are lots of good picks into Vayne. Check out Vayne’s Champion Page to find which champions are good and bad into her.

Vayne is deadly in the later parts of the games. There are ways you can set her behind in the early game to make her late-game less oppressive. We hope these tips will make dealing with The Night Hunter a little bit easier.