How to Play Against Akali

How to Play Against Akali (6 Tips)

Akali is one of the more frustrating assassins to deal with in League of Legends thanks to her mobility and invisibility.

While she is annoying to deal with, it’s not impossible to beat her – so don’t give her the pleasure of saying “You’re scared, good to know,” by banning her.

This Mobalytics guide will break down several different tips and tricks to handle the rogue assassin.

Since Akali is played in both the Mid and Top, our guide will help you counter Akali in both lanes, but there might be a slight variation in her playstyle depending on her role.

How to play against Akali:

1. Use your range advantage

Akali is a melee champion which means she lacks range. If you’re playing a ranged champion like Syndra or Teemo, try to harass her as much as possible with basic attacks. Combine the poke from your abilities with basic attacks to force her to burn through her sustain early into the laning phase.

If she is forced to consume her potions early, she may need to recall earlier than she may have wanted, forcing her to fall behind and give up CS for XP, or use her Teleport to get back to lane. On the other hand, getting her low is a good strategy if you want to kill her- duh.

Laning against a low enemy opens up a lot of potential. For example, your Jungler may try to gank you as a low health target is easy gold.

Alternatively, it can allow you to look for the kill on her, or it could allow you to zone the Akali away from the minion wave. All-in-all, getting Akali low via harassment tools will force her to fall slightly behind.

Good times to harass Akali with basic attacks are when she is last hitting minions as she will focus on securing them and she may put herself in a position where you can land an auto.

When you do harass her, make sure you stay out of range so she cannot trade autos with you. Also, stand behind at least one minion when you try to hurt her so the minion will block her E. If she can’t land her E, she will find it slightly harder to trade with you.

Be careful when harassing her in a minion wave. As soon as you auto-attack her, the enemy minions will start to focus you. If you attack her in a large wave, the minions will deal a lot of damage which could even out the trade.

Don’t auto-attack her when there is a cannon minion in lane as that minion deals a lot of damage. Fall backwards after auto-attacking Akali to drop minion aggro.

Even though Akali is good during the laning phase, her very early game (levels 1-3) is really weak and abusable. If possible, try to harass her as often as you can and set her behind.

We’ve already discussed it previously, but if you’re able to set her low, it will make it near impossible for her to play aggressive once she is strong.

Akali likes to get an early lead and she will look for a trade once she has some levels under her belt, but if you get her low, it will make any efforts of an early all-in incredibly risky as she may die in the process.

Thus, keeping her low will increase your survivability and reduce her ability to trade. 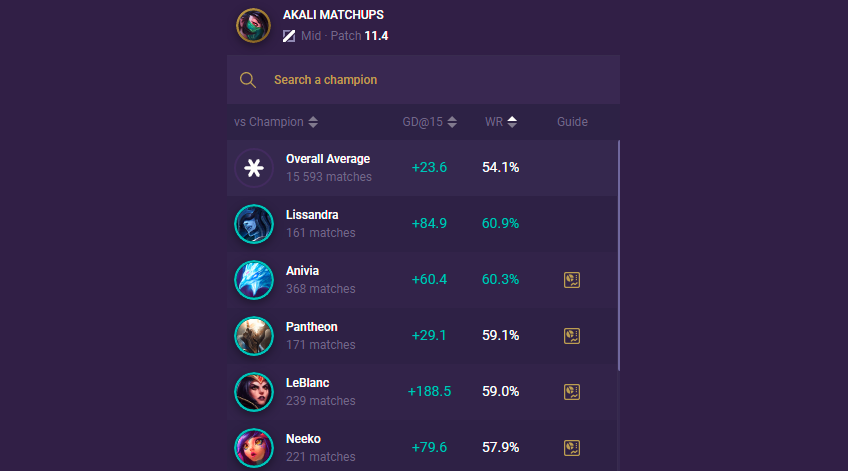 As you can see, Pantheon has a 59% win rate against Akali in the mid lane. These stats are taken from Akali’s champion page.

If you want to find what champions are good or bad against Akali, check out Akali’s champion page.

3. Play around her energy

Akali doesn’t have traditional ability costs like most champions in the mid or top lane. Instead of mana, she uses energy.

She can use her abilities more often than a Syndra or Ryze as her resources regenerate and come back much faster than those champions, but that doesn’t mean she can constantly spam her abilities.

When she runs low on energy, she will not be able to trade as effectively back with you if you initiate a trade.

While she is low on energy, she will have to rely on her basic attacks or other tools rather than her Q to trade with you.

Akali needs a lot of energy to go for an all-in or go for a favourable trade. Look to initiate a trade when she is low on energy.

Preferably, after she has just used her Q as the ability will be on cooldown, which means she will deal even less damage in a trade.

Time is everything on champions with energy, so look to trade as soon as they waste their damaging ability.

Once Akali hits level 6, her kill pressure intensifies. By this stage of the game, she should have components for her first and she’ll be able to dish out a lot of damage quickly.

This is her second power spike during the laning phase and one of which she’ll try to capitalize on.

Respect her all-in potential once she hits level 6, especially if you’re a weak level 6 champion such as Shen or Ryze as her Ultimate does a lot of damage and increases her kill pressure significantly.

If you do not respect her damage output, she may be able to get a kill and that might be the only lead she needs to snowball and gain a huge advantage over you in lane.

If you’re a weak champion and playing safe and respectfully and not putting yourself in a position where Akali can kill you- you’re playing it right. But, you need to be careful as Akali may roam and try to use her Ultimate to assist an ally and gain a lead that way. If she leaves lane or Teleports, ping and try to follow her.

As a side note, if you’re almost level 6, it’s safe to assume that she is almost level 6 too. If you’re low, recall before hitting level 6 just in case she gets the level up before you and looks for a kill.

Understanding when a champion strong is key to any matchup. Here’s a separate guide that will help you understand how to recognize a champion’s power spike and what you can do to play around it

When you’re up against an AP champion, you should always adjust your rune page to take magic resistance rather than armor runes. Traditionally, most players will take armor runes to help them with the enemy.

Armor is beneficial against Akali as she does deal mixed damage, and armor is great against AD champions. However, Akali will be buying AP items and deal a considerable amount of damage to targets with less magic resistance.

If you can, try to take magic resistance runes, 1 or 2 can be very helpful if you’re weak in the early game. For tanks, you could opt for double magic resistance, while an AP enchanter should take one.

6. Group and play as a team

One of the best ways to counter assassins is by grouping as a team and limiting your time spent split up. Akali is an assassin and can easily take down targets who are alone or moving around the map on their own.

To counter her, make sure you group as a team to make it much harder for her to pick off a target and get a kill.

If you’re grouped tightly together, it will be hazardous for her to go in for a kill, as once she does go in, your team can focus her down and kill her.

Here are some general pointers

Akali can be deadly to play against, but it’s not impossible to beat her. Preventing her from getting an early lead will make her weaker overall and easier to handle.