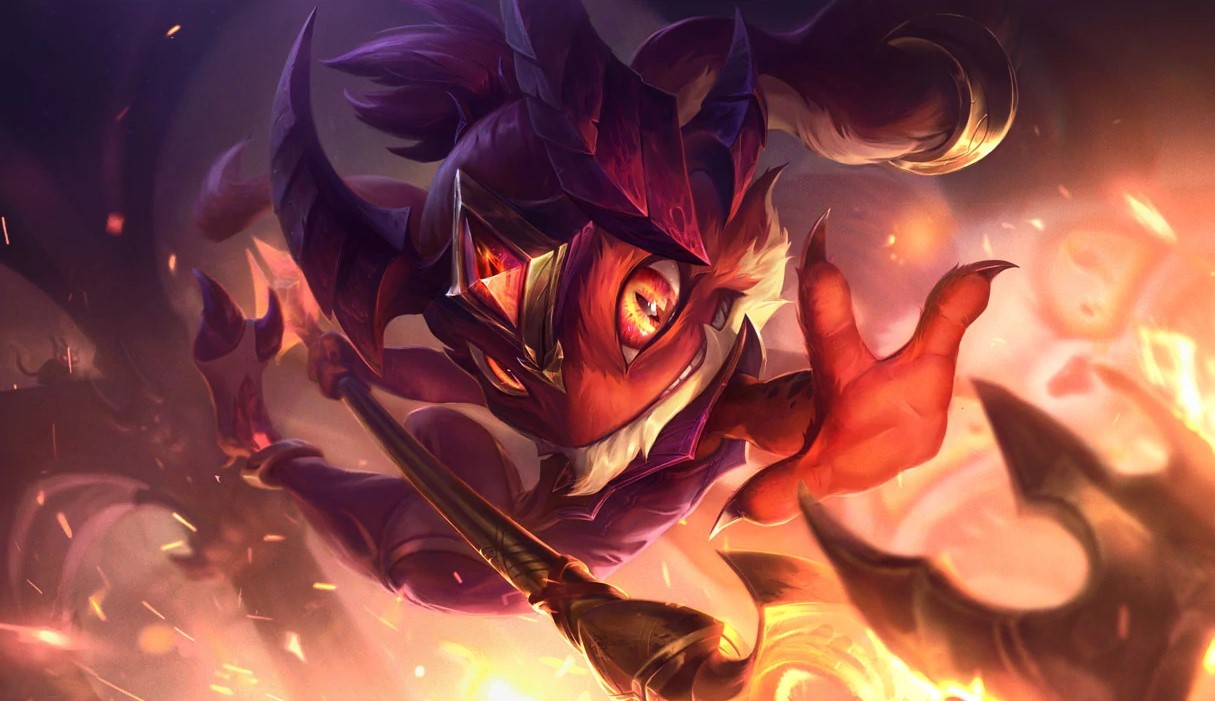 How to Play Against Fizz

How to Play Against Fizz (7 Tips)

A snowball heavy and mobile champion, such as Fizz, can be really difficult to deal with if you’re playing somebody who needs time to come online, or who is pretty immobile. Fizz can 100 to 0 someone with seamlessly no effort which makes him a huge threat to any would-be laner.

In this guide, we are going to break down some tips and tricks you can use to counter Fizz in the mid lane.

A lot of these tips will work if he is played in the top lane too, but generally speaking, he will have a slightly different build and playstyle which means some of these tips may not hold as true.

How to play against Fizz

At level 1, try to bully and harass Fizz as much as possible. This will make it very hard for him to look for an early all-in, as he will be forced to burn through his early sustain in order to remain in lane, which is a huge benefit for you as well.

Every time he tries to last hit or push the wave, auto-attack him and use an ability on him. Rinse and repeat this whenever possible on the first couple waves.

However, it is important that you do not over-commit to poking early on- especially if you cannot match his sustain.

If you walk forward, you run the risk of the enemy minions focusing you for longer and dealing more damage to you. This in turn could make your early poke meaningless as you’ll both be the same HP.

Depending on the matchup, Fizz may look for an aggressive play at level 2 if you’re low on health, immobile or really weak in the early game. While he may be unable to do so if you can poke him down beforehand, it’s not impossible for him to make this type of play to burn an early Flash or force you to use your sustain.

Hitting level 2 at the same time or before Fizz can often be a deterrent and prevent him from going in as you’ll be able to trade back with him. However, hitting level 2 is not just a deterrent.

With the level advantage, you can look for a favorable trade with 2 abilities. For some champions, their level 2 power spike is pretty good. While they may not have any kill pressure, they can dish out a lot of burst damage.

For example, Syndra with her Q and W at level 2 can do a considerable amount of damage when paired with an auto-attack and Electrocute. Lucian can go for his meme level 2 all-in with his Q, E, and auto-attacks.

To hit level 2 first in a solo lane, you need to kill the first minion wave followed by 1 melee minion on the second wave. This advice is not just useful against Fizz. It’s incredibly important that you hit level 2 first or at the same time regardless of the matchup you’re in.

3. Play respectfully at levels 3 to 4

Most Fizz players will look for an aggressive play and commit to an all-in with Ignite at around level 3 or 4 once they have access to their basic abilities.

With this in mind, avoid overextending or pushing too far up in lane. This will reduce his ability to all-in you and chase you down, which subsequently increases your chances of surviving a would-be all-in.

Respect Fizz and give him a wide birth. Give him as much space as possible to make it very difficult for him to all-in you. If you’re playing a weak early game champion, then you need to be very respectful and expect him to look for an early all-in at levels 3 or 4 and go for a kill.

Do not fall behind by positioning aggressively or overextending.

If you’ve pushed Fizz into his tower, walk backwards and out of range so it is impossible for him to use his Q or E aggressively and chase you down.

Just remember, he wants to play aggressive and get kills and his first major opportunity to do so is at level 3. Because he may not be able to all-in you as soon as he hits level 3, it doesn’t mean you’re safe to do whatever you want.

He could be waiting for you to overextend before chasing you down. Do not die to him or else he will be able to snowball and take over the map!

At level 6, Fizz has a lot of extra kill pressure thanks to his Ultimate. It can enable him to one-shot a lot of squishy champions and can even be used to set up his Jungler.

Once you’re level 6, you need to play safer if you’re not at 100% health as he deals a surprising amount of burst damage.

His Ultimate has a rather short cooldown and it’s up more often than you think. Try to keep a mental note on how long it has been down for and play safer when you know it’s up. Its base cooldown is 100 seconds- so keep that in mind.

If you’re ahead of Fizz, or if you’re somebody who is very mobile/tanky and who he cannot kill easily or quickly, he may look to roam around the map and help his allies get kills.

You can counter this by trying to match his roams or keep him pushed into his tower so he is unable to roam.

Each of these tips do have their side effects though. He will still be able to all-in you if you’re pushing him into the tower, or he may use his Ultimate to set up his Jungler for a kill while you’re overextended.

If you do try to match his roam, he may be trying to bait you into leaving the safety of your lane in order to all-in you. If you do wish to follow the Fizz, try to take an alternative path to him so you do not run into him directly.

If you cannot match or counter his roam, ping that he is missing and push the minion wave so he is unable roam for free. You can earn tower gold and tower plates while he’s gone. 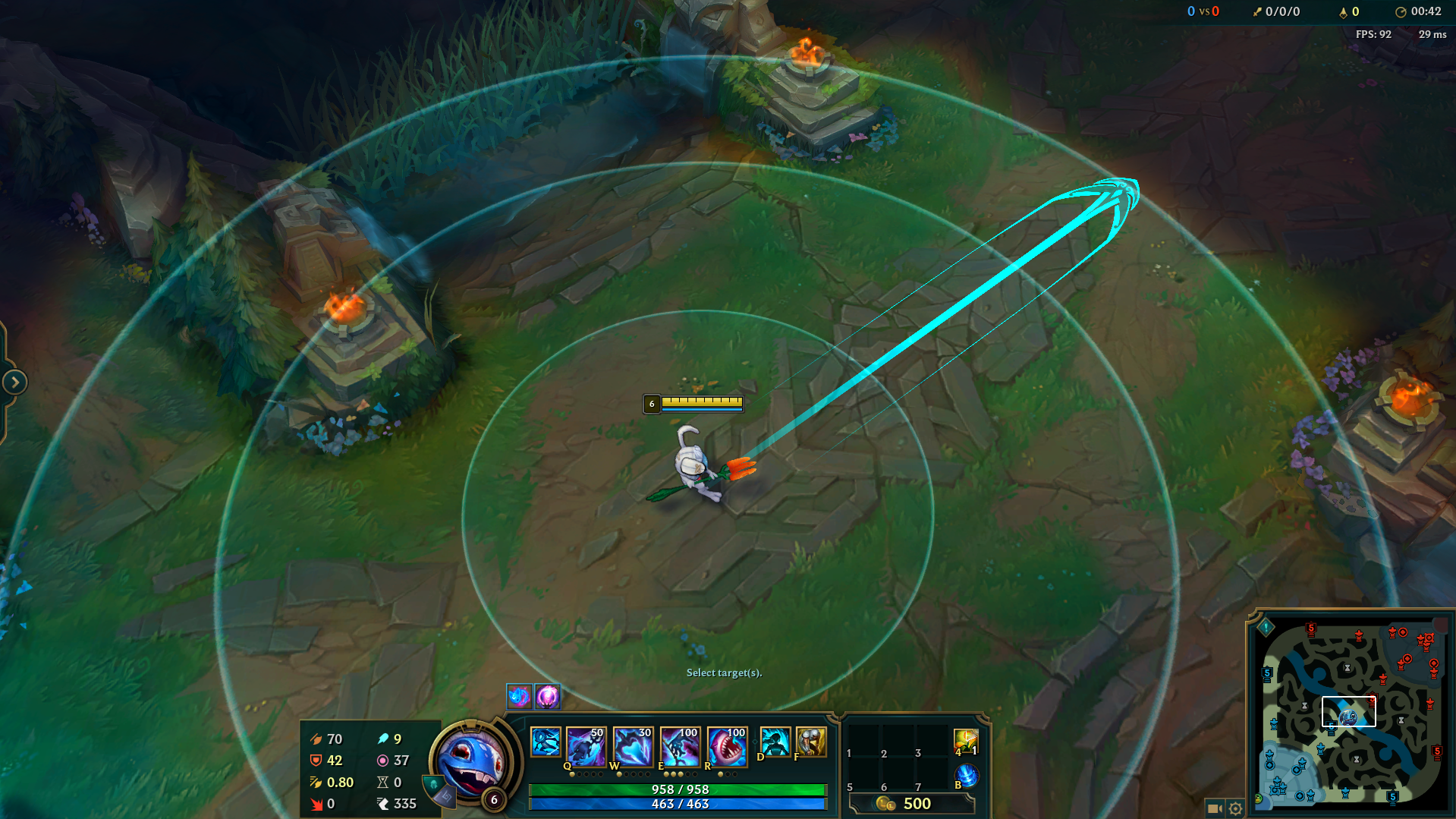 This is the range of Fizz’s Ultimate.

As a side note, keep an eye on your XP bar. If you’re almost level 6, you should expect him to be nearly level 6 too if the lane is even. If your level 6 isn’t as strong as his, you need to reposition and play further back.

Understanding when a champion strong is key to any matchup. Here’s a separate guide that will help you understand how to recognise when a champion is strong and what you can do to play around a champion’s power spike.

Depending on the champion you’re playing, you may wish to invest in defensive items to help protect you from Fizz’s all-in.

Items such as Zhonya’s Hourglass, Guardian’s Angel, Banshee’s Veil, and Mercury Treads are all defensive items that can help save your life and protect you from incoming damage from the Fizz.

These items are good as they all offer defensive stats with Zhonya’s Hourglass, GA and Banshee’s Veil all offering you added protection to prevent your death.

I would highly recommend picking up one of these items if the enemy Fizz is strong or if you’re a squishy champion.

If you want to learn more about items that can counter Fizz, check out our new item guides for Season 11.

Zhonya’s Hourglass is good on:

Guardian Angel is good on:

Banshee’s Veil is good on:

Mercury’s Treads is good on:

Cleanse, QSS and Mikeals do not stop Fizz’s Ultimate. So do not bother investing in them as a way of escaping the fish.

However, they may be useful against other enemy abilities.

To some extent, Fizz struggles in traditional team fights. As he is an assassin, he may not want to straight 5v5. He can technically fight like this, but most Fizz players prefer to flank or attack from the side so they do not get poked down and forced to back off before they’re able to engage.

With this in mind, if you cannot see Fizz when you’re sieging or looking for a fight, expect him to be off to the side and waiting for an optimal opportunity to pick someone off with his Ultimate.

You can reduce his chances of doing this by warding your flanks and assuming that he is nearby and ready to fight.

Depending on where you’re trying to fight, you will need to ward different areas. But here are some good warding locations. 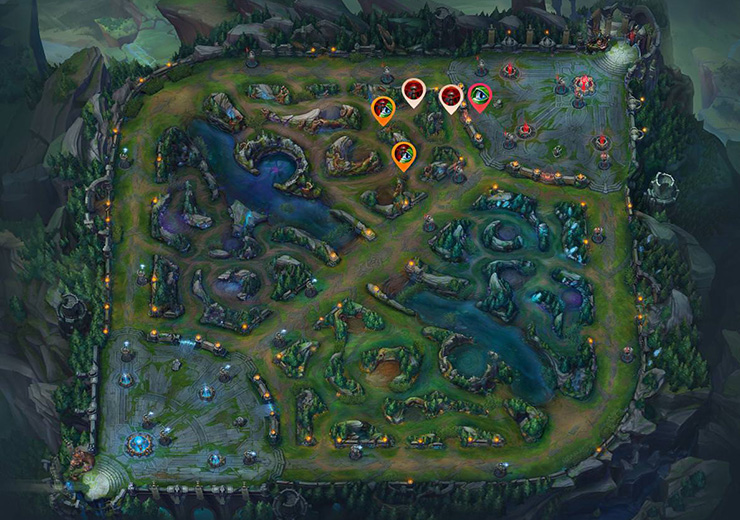 When sieging objectives in the top side of the map like a tier 2 tower on an inhibitor tower, place vision inside the jungle and around the objective itself.

The information wards can provide will allow you and your team to determine if Fizz is coming and what you should do about it. You can either choose to disengage or look to turn on to him. 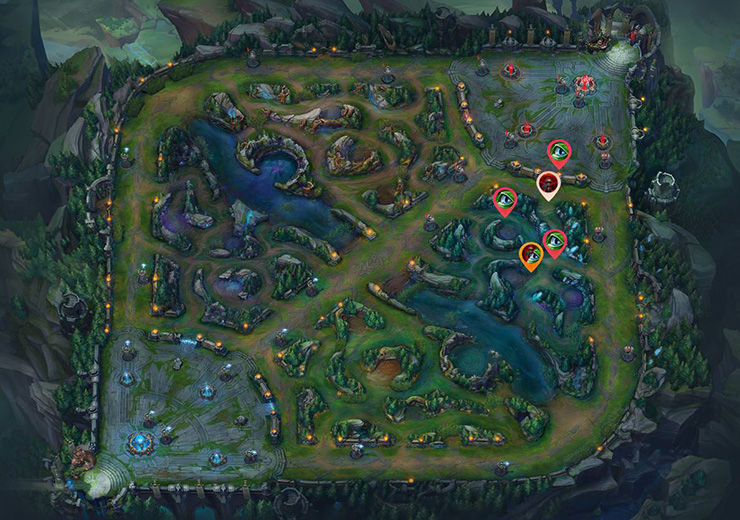 When sieging in the bottom lane, you could place wards in these areas to see if Fizz is coming to flank. These warding locations are good when sieging a tier 2 tower or an inhibitor tower.

If you want to learn more and find more warding spots to prevent flanks from Fizz or any other champion in the game, check out our in-depth vision control guide.

Fizz is an assassin and will look to kill targets that are moving around Summoners Rift alone. In the mid-game, in particular, this is one of his favorite strategies to get ahead.

You can reduce his gold income and his chances of winning in the late game by understanding what he wants to do and avoid doing it!

Avoid walking around the map alone if you know Fizz is nearby or if you haven’t seen him on the map in the while.

Fizz loves to take down targets in high traffic parts of the map like listed below. He will often “camp” in these bushes and wait for someone to walk by before casting his Ultimate. 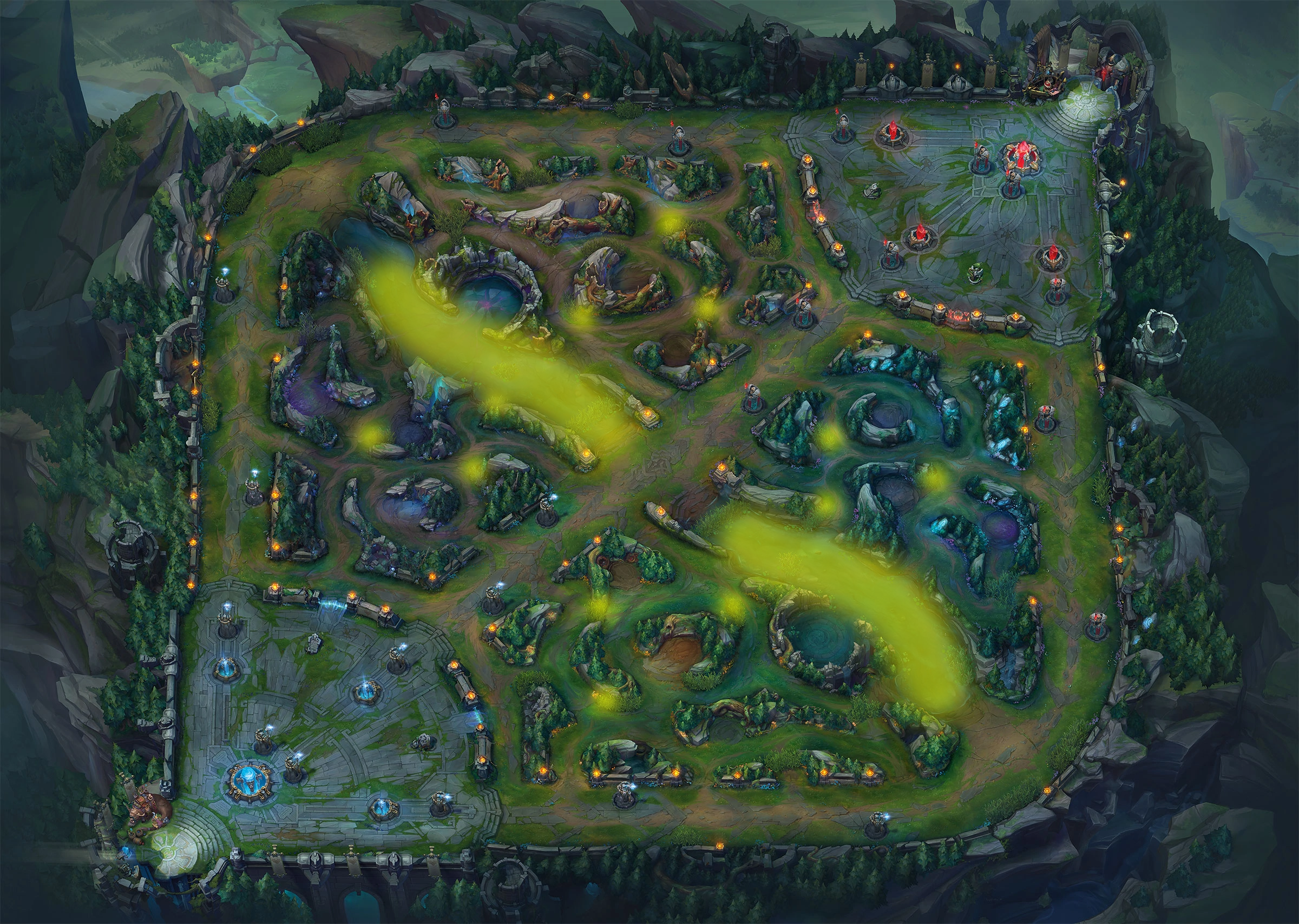 The yellow highlighted areas are areas of the map where Fizz likes to ambush players.

As you can see, he loves to hide in the river and around jungle entrances.

General tips on how to walk around the map safely:

Try to keep a constant eye on where he is at all times and play accordingly. If you’re weak, try and avoid walking around the map if he’s nearby or else you’ll be an easy target for him. Treat him the same as you would a Zed, Akali, Syndra, or Leblanc.

To summarize, there are a few different things you can do to counter Fizz and make the laning phase and playing against him easier. For the most part, it’s all about being respectful against the Fish and understanding what he wants to do, and playing around it.