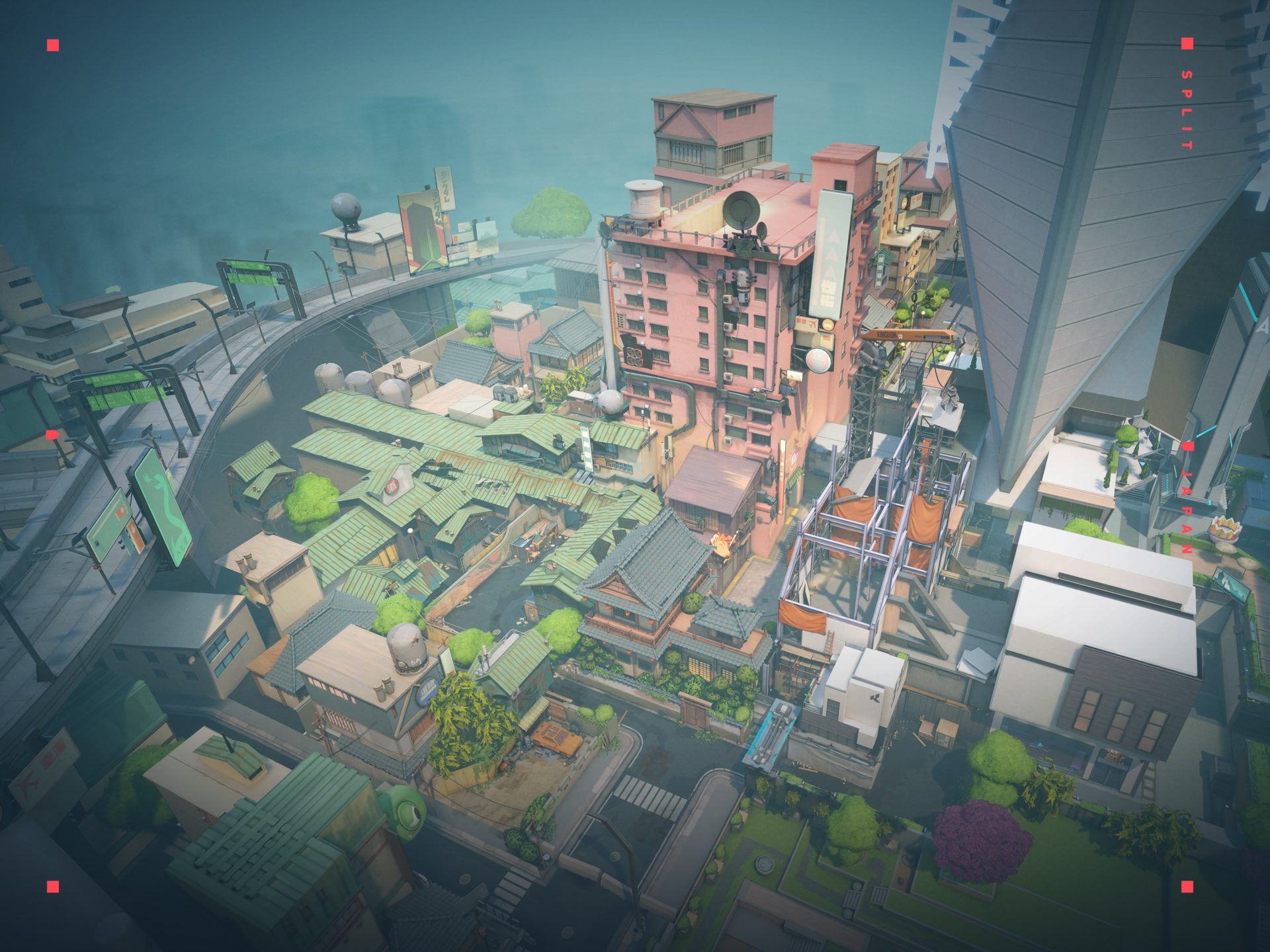 From 4th to 7th February the first VCT Challengers tournament was played out in the North American region.

The starting shot for the Valorant Champions Tour (VCT) 2021 NA had many interesting and unexpected matchups to offer since a few of the so-thought favorites didn’t even make it out of the Open Qualifier a week prior.

Teams like T1, 100Thieves, TSM and Cloud9 Blue failed to survive the Open Qualifier but that didn’t diminish the quality of the games later on. Rather the opposite was the case.

In the end, these eight teams were able to close it out and earned the chance to participate in the Main Event of VCT Challengers #1 with a price pool of $50,000 USD:

Today, we are taking a closer look at the matchup between the two teams that made it all the way to the Grand Final: Immortals and Sentinels.

Immortals showed a more or less clean performance throughout all their Upper Bracket matchups and secured themselves a spot in the Final after beating XSET 2-1, Gen.G Esports 2-0 and Luminosity Gaming 2-1 in maps.

Sentinels on the other hand lost their very first Upper Bracket matchup against Luminosity Gaming and therefore were forced to rebuild confidence for a challenging upcoming route through Lower Bracket. Spoiler: They did it.

The Grand Final was designed to be a best of five, which means the first team to win three maps overall wins the Grand Final.

However, since Immortals came from the Upper Bracket into this matchup they received one map win in advance and theoretically only needed two additional map wins to close it out.

In spite of this considerable head start for Immortals, Sentinels defeated their opponent in clinical fashion.

And here we are, having the exciting opportunity to go over three specific and especially interesting rounds out of the first map of the Grand Final: Split.

But let’s take a look at a few relevant statistics for this map regarding both teams before we are getting into the analysis part.

Before this matchup Immortals only played Split two times in the entire VCT Challengers #1 tournament.

They won their first game on it 13-8 against Team Envy and lost their second one 10-13 against Cloud9 Blue.

Sentinels on the other hand have a bit more experience on Split. Overall, played five times in Challengers #1 and four times a win. Only against Luminosity Gaming they had to swallow a 9-13 loss.

So, on paper Sentinels have the clear edge regarding experience on the map.

Agent compositions for both teams seem to be fairly non-discussable on Split in the past and therefore pretty easy to predict for this matchup.

In the following section, we highlighted two different rounds to show why Sentinels’ approach to the map worked out basically across the board and how Immortals tried to cope after losing six consecutive rounds in the beginning of the game.

Additionally, we also took a closer look at the second Pistol Round due to the meta-describing use of the Frenzy by both teams.

While observing these aspects, we will also be pointing out useful tips and tricks that you can apply in your own matches.

To make the rounds we want to further explore with you a bit more clear and vivid, we summarized the respective rounds to a few key points.

This allows us to focus on the most important decisions and duels in the round and to fade out everything less important for explanation’s sake.

Because oftentimes winning or losing rounds comes down to very few decisions and key duels within the round.

Simplifying the events of a round can help immensely in tracking down these deciding factors and also mistakes that happened.

So, let’s get right into our first highlighted round!

At this point in the game Sentinels already started well into the game. They won the Pistol Round and three consecutive rounds after.

For the first time in this match both teams have the money for a full-buy. The Immortals bank even recovered enough from the passed round losses to be able to afford an Operator.

This is how the 5th round went in chronological order:

[8:23] Sentinels (attacker site) decide to run a default in which they take early B tunnels control in a fairly aggressive fashion

[8:32] Simultaneously, Sentinels work their way forward in Mid after registering that there is no Mid aggression on Immortals side

[8:52] Since Sentinels managed to get numbers advantage (4v3 at this point) they decide to make use of it and do a simple execute on A site

[8:58] Dapr manages to get the round-concluding kill onto NaturE in A Heaven because Immortals consequently decide to safe their weapons for the next round after

[9:32] Nonetheless, since Sentinels bank is close to the maximum of ¤ 9,000 credits they decide to hunt the remaining Immortals players

Overall, the round was decided by the first frag coming from sinatraa onto Khemicals and the maintaining of the resulting numbers advantage over the whole round.

A successful default, efficient trading and a solid round-closing execute by Sentinels never really left a chance for Immortals to turn the situation around after the initial whiff from Khemicals’s Operator.

And that’s exactly what you can take away from this round for your own play in the future. If your team manages to get an early entry kill and doesn’t get traded, retreat for the time being and think about how you can capitalize from this numbers advantage.

Many teams want to compensate for a loss of manpower by pushing somewhere on the map and getting information about the enemy positions. Waiting for this kind of aggression after an entry kill might be a good plan.

A simple execute like Sentinels decided to do is oftentimes a solid way to benefit from your numbers advantage and win the round.

However, there are many other ways to round off a round like that. As long as you maintain the earned numbers advantage by trading kills in the consequent duels you should be fine.

In the 7th round of the game Immortals seemingly found a way to counter Sentinels B Tunnels default and even won their first round in the end.

Again, it was a full-buy for both teams and Sentinels as well as Immortals bought one Operator each.

Let’s see how Immortals went about this round and what they did differently in comparison to previous rounds.

[13:23] Sentinels run their usual B Tunnels default seen in many rounds before

[13:38] Immortals try for the first time in this match to retake B tunnels control – and succeed

[13:55] Sentinels A players in their default, Cypher Dapr and Jett ShahZaM are slowly contacting A to regain map control and balance out the situation

[14:10] Nonetheless, both Dapr and ShahZaM get a frag to make it a 3v3 retake since the Spike is getting planted on A site in the meantime

[14:35] Immortals retake becomes possible because Dapr left his teammate Zombs alone on site who then gets sandwiched and killed

The entire round the balance was shifting between both teams.

After Immortals’ successful B Tunnels reaggression the round was in favor for them.

But the moment both Dapr and ShahZaM equalized the situation by killing a player each on A, the Spike plant was made possible and a 3v3 retake situation for Immortals resulted.

But then Dapr made one wrong decision by not considering the Spike plant position and he left the site and his teammate by himself.

This was the key factor that enabled Immortals’ remaining three players to kill the site player without a trade and just defuse the Spike without any risk.

An important learning you can draw from this round is to always keep the communication in the team alive. Most likely the Spike planter zombs didn’t realize he was able to plant more open for heaven and ramp because ShahZaM didn’t call him that he was holding heaven in the meantime.

And also Dapr’s round-defining decision to leave the site after the Spike plant probably came from bad comms in this particular situation.

So, always communicate the important details of what you are doing to your teammates ingame.

Independent of Ranked ladder or team-based matches this makes winning the rounds that matter a lot more consistent. Even if adrenaline and focus are high in those situations.

In the last highlighted round we are looking at the second Pistol Round in this game. After half time the defender team now is Sentinels and the attacking team Immortals.

You don’t like to see it but it simply summarizes the current pistol meta in Valorant pretty perfectly: Nine Frenzys and only one Ghost was bought for this round.

Let’s look at how the best teams of NA work with this gun.

[23:46] Something that looked like an instant A rush attempt by Immortals was blocked by Sentinels’ utility early on

[24:10] Immortals decide to rotate to Mid in a very noisy fashion which gave Sentinels’ dapr also the chance to rotate to ropes in time for their cross to B Heaven

[24:22] Dapr manages to get a kill on an unaware Immortals player, Khemicals and also got away with his life

[24:29] A close range massacre takes place when all remaining Immortals players drop down ropes into to two Frenzys held by Dapr and Sinatraa

Sometimes it’s better to let the enemies run into your well-prepared set up without any resistance from your side. By blocking the enemy team just because you can, you might take the fight somewhere else where you aren’t that well-prepared for a hit.

Sentinels did that. They blocked the initial A rush although their setup on A was really solid to begin with.

But in the end it worked out for them because Immortals were unlucky by dropping down into a close-range fight in which not even one but two Frenzys were just waiting for their prey.

Let’s take a look on the overall scoreboard of VCT Challengers #1 Grand Final. 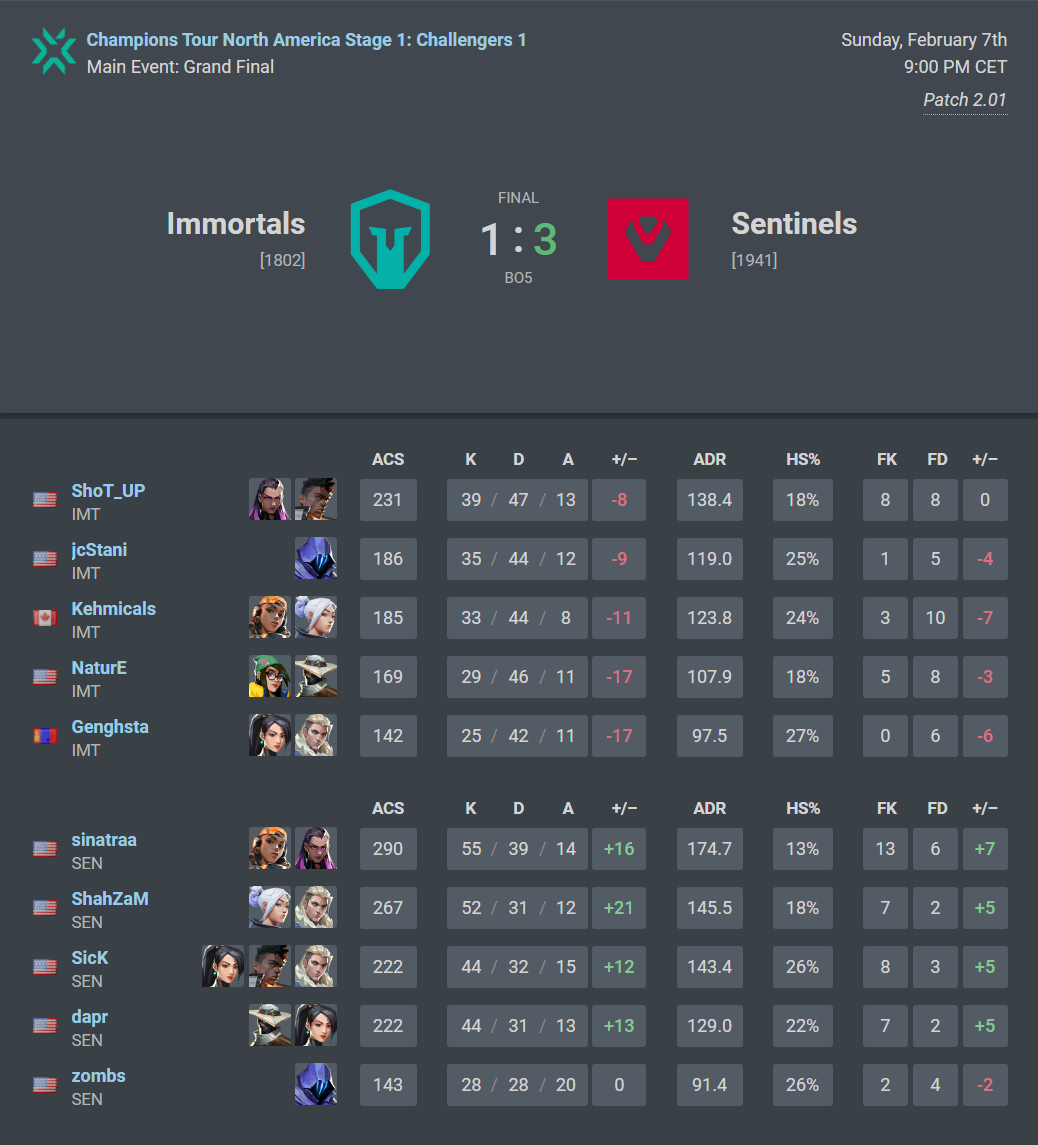 Our personal MVP (most valuable player) of this matchup is Sinatraa from Sentinels.

Not only is he the top fragger of the Grand Final, but he also holds an unbelievable ratio when it comes to entry kills and entry deaths.

In three maps he opened thirteen rounds with his first frags for Sentinels and only died trying six times.

For a pure entry player which Sinatraa for sure is, this is an incredible statistic. Also, no other player on the server came close to his performance.

The agent comps we saw this game were also very congruent with the previously known comps on each map from the respective teams. No real surprises here.

But if you want to let yourself be influenced by our take on agent comps on each map, be sure to check out our Valorant Agent Tier List.

It’s always up-to-date and highly discussed by our high-ranked staff.

To learn more from the pros, check out our Valorant Leaderboard and Profiles.