TFT Set 8 Monsters Attack is about to release, and there are a variety of unique traits coming to the game. We’ve covered guides on some of the new traits such as Underground, Heart, Anima Squad, and more.

This time, we’re gonna tackle the Gadgeteen trait, and give you everything you need to know about it. This includes how it works, what champions are Gadgeteen, some teams comps, and more.

Gadgeteen is a trait that focuses on the item system and gives your team additional item(s). This can be extremely powerful, but can also be difficult to optimize. Let’s get into the guide.

The Gadgeteen trait is quite simple, but it will be difficult to understand it’s full potential.

Essentially, when you activate the trait, you will be given a powerful modified item, but that item will only last one round. However, with the trait active, you will create a modified item each round. This means that while you have a strong item, you cannot reliably use it every round.

This makes itemizing your carry quite difficult. You want to save an item slot for a strong Gadgeteen item, but you may not have the right item for your carry every round.

Gadgeteen: Every round, Gadgeteens generate a random modified weapon that can be equipped by any unit. These weapons are powerful, but not durable and fall apart after 1 round of use. Gadgeteens will not make new items to replace items left on the bench.

Gadgeteen (3): Create 1 item every round

Gadgeteen (5): Create 2 items every round

There are 9 Gadgeteen items that you can generate every round. Here’s a quick rundown of them all.

Grant 20% Omnivamp. Once per combat: At 40% Health, gain a 25% maximum Health shield that lasts up to 8 seconds. While the shield is active, the holder gains 40% AD.

Enemies within 2 hexes have their Magic Resist reduced by 50%. When they cast an Ability, they are zapped for magic damage equal to 185% of their maximum Mana. Every 4 seconds, the holder taunts all enemies in range to attack the holder.

Grant Health 150 bonus Health. Every 1 second, an enemy within 3 hexes is burned for 10% of their maximum Health as true damage over 10 seconds, and receive 30% reduced healing for the duration.

Combat start: Shoot a beam that increases the maxiumum Mana of affected enemies by 35% until they cast. Additionally, affected enemies have their Attack and Movement Speed slowed by 20% for 1.5 seconds.

Gadgeteen have 5 units in the trait, so it’s about the middle of the pack in terms of quantity.

Here’s a list of the traits you can branch into with the Gadgeteen units.

There isn’t any overlap within the Gadgeteens, so you’ll be looking to these traits to branch into for a Gadgeteen comps.

Let’s briefly go over each Champion in the Gadgeteen trait and what you can do with them. We’ll also show each Champion’s Hero Augments so you can know what to look out for.

Lulu is a simple backline AP damage dealer. She doesn’t provide too much, but the Heart trait is a valuable one to add to the team comp for bonus AP.

She will also be a nice early pickup to activate the 3 trait bonus for an extra item.

Growth Spurt: Gain a Lulu. When she casts her Ability, she gains 125 bonus Health and 25 Ability Power (this can stack).

Foster Growth: Gain a Lulu. When you field her, she and her allies gain 35 Ability Power when equipped with an item.

Poppy is a frontline unit for the Gadgeteen trait and her ability is a mix of damage and survivability. Defenders will be a solid frontline to use in the early to mid game. In the late game, you can look to branch out of the Defenders into other units, or you can keep Poppy to keep the 5 Gadgeteen trait active.

Annie is the only 2-cost Gadgeteen, and she boasts a nice 3 traits. Having 3 traits is always impactful for the early and mid game to help build your strongest board.

Annie is a sort of hybrid frontline, and her survivability comes mainly from her ability, allowing her to gain a shield. If you don’t want to use Poppy as your frontline, you can use Annie instead and lean more toward AP damage.

Reflector Shield: Gain an Annie. While her Ability’s shield is active, enemies that attack her take 150 magic damage (once every 0.5 seconds).

Burning Spirit: Gain an Annie. When you field her, your team gains 15% Ability Power, tripled while they are below 50% Health.

Zoe is the only 3-cost unit of the Gadgeteens and she also has three traits like Annie. Zoe has a small mana pool, meaning Blue Buff and other sources of mana generation will help her spam abilities.

While Zoe hasn’t shown too much carry potential, she will provide a good branch into other traits like Hacker while also providing some supplemental damage.

Sleepy Time: Gain a Zoe. Combat Start: She puts to sleep the 3 lowest Health enemies stunning them for 4 seconds.

Nunu is the last Gadgeteen and is a 5-cost unit, making him difficult to find consistently every game. Nunu resembles units of the past like Singed from Set 2 or Aurelion Sol from Set 3. These units travel around the board dealing damage instead of attacking and casting like other units.

However, mana generation will still be nice for Nunu as when he casts, the snowball he rolls will grow larger, faster, and increase its damage.

They See Me Rolling: Gain a Nunu. When you field him – your team gains 20 Ability Power and an additional 5 every 5 seconds.

There are a lot of Gadgeteen Augments to choose from with the new Hero Augments system. Since the Set is still in development, feel free to try them all. Build around Annie, Zoe, Nunu, whoever you want.

The Heart and Soul augments both grant an extra bonus to the Gadgeteen trait. This is very impactful for Gadgeteen comps since the trait does not synergize with more or less Gadgeteen units on board.

By having one of these augments, you can replace Lulu or Poppy, two low-cost units, with more impactful late game units. You will still have the full benefit of Gadgeteen while further empowering your comp.

Your units equipped with 2 items temporarily gain a random completed item at the start of combat. Gain an item component.

Binary Airdrop synergizes quite well with Gadgeteen comps. When you have a carry, you don’t necessarily want to place 3 items on them as you may get a strong Gadgeteen item. Because of this, you can get a lot of value from simply leaving two items on them.

If you have a Gadgeteen item that doesn’t fit on your carry, Binary Airdrop will cover for you. Furthermore, Gadgeteen grants 1 or 2 additional items, meaning you can fill out more units with items, leading to more Binary Airdrop value. 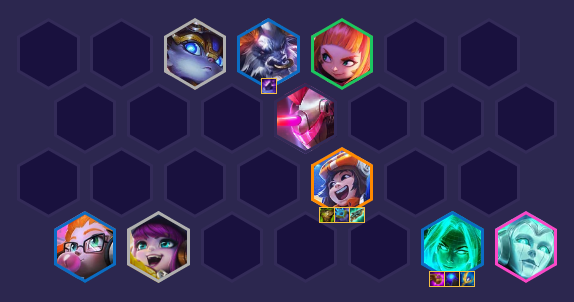 All in all, Gadgeteen is a fun addition to the game and is a trait focused on granting power through items. We’ve seen similar traits that revolve around the item system, but Gadgeteen takes it to a new level.

We haven’t experimented too much with the Gadgeteen variations yet, but we find a simple 5 Gadgeteen comp with Hacker to be quite successful.

Gadgeteen comps will be great for those trying to maintain a win streak, as the additional item value helps propel you through the mid game. Just be prepared to always try to build your strongest board with a different item every round.