How to Play Anima Squad

In less than 2 weeks, TFT Set 8: Monsters Attack will officially release. In the meantime, the game is on the PBE server where players can test all of the new champions and traits.

In this guide, we’ll be taking a deep dive on the Anima Squad trait. We’ll go over how it works, what champions make up the trait, things to keep in mind, and some team comps to try out.

Anima Squad, like many other traits before, provides a bonus to AD and AP based on which tier trait you have active. The unique aspect of Anima Squad is the stacking Health bonus you receive over the course of the game.

We’ve seen champions have stacking stats before (like Veigar from Set 4), but not in a trait before. Even still, the stacking bonus is only for Health, so you won’t be one shotting anything with this trait (or maybe there’s some secret tech).

Note that Anima Squad does have a buildable Emblem with Spatula and Rod. Because of this, you can also look to pair Anima Squad with any champion that scales with Health (like Zac).

Let’s say theoretically, you only run Anima Squad units. If you won every round and took down every unit, by Stage 6, you could gain upwards of 400 Health per unit. With a board of 7 Anima Squad units, that’s 2800 Health or almost 3 Warmog’s worth or Health.

While that sounds nice and dandy, that is under the assumption that everything works out perfectly. Even still, the bonus Health is a nice bonus to have on top of the bonus stats.

Like some other traits, Anima Squad does not present and Class synergy with the units in the trait. IE no two Anima Squad units activate another trait.

Here’s a list of the traits you can branch into with the Anima Squad units.

From the games we’ve tried so far, it seems there is a lot of flexibility with Anima Squad. You can go as low as 3 and use other traits. You can also go heavy into Anima Squad and try to go for 7.

Let’s briefly go over each Champion in the Anima Squad trait and what you can do with them. We’ll also show each Champion’s Hero Augments so you can know what to look out for.

Nasus is a simple frontline unit with an empowered auto attack ability. They’ve taken Bonkey Kong and reskinned Wukong to Nasus. The attack speed slow is quite nice, and if you build your comp around Nasus, he can Bonk important backline targets too.

Soul Eater: Gain a Nasus. When you field him, he and his allies heal 200 Health on takedowns.

Stacks on Stacks: Gain a Nasus. He gains 10% Attack Damage, increased by 3% permanently each time he casts his Ability.

Sylas also is a simple frontline unit with a small AoE ability. His ability does provide sustain, but it is a flat sustain, so it won’t get to any crazy values. Maybe with enough AP, Sylas can become a Bruiser type carry with sustain and damage.

Kingslayer: Gain a Sylas. His Ability deals 40% more damage and restores 20% of his missing Health.

Petricite Chains: Gain a Sylas. When you field him, your team gains 15 starting Mana and his Ability increases enemies’ maximum Mana by 35%.

Jinx is the first backline unit we see, and her ability is quite impactful whether she is the carry or simply utility. Any type of stun is a premium for abilities, so Jinx will likely see some play in Anima Squad or Prankster comps.

Everyone Goes BOOM!: Gain a Jinx. When you field her, your team gains 10% Attack Speed, tripled after the first enemy dies each combat.

Get Excited!: Gain a Jinx. When she scores a takedown, she gains 100% Attack Speed and Movement Speed for 5 seconds.

Riven is a unit with 3 traits, which automatically makes her a strong choice for any Anima Squad comp. What’s interesting is that Riven is both a Defender and Brawler. We don’t usually see units with both generic frontline traits. This makes Anima Squad comps quite flexible, as you can build into either frontline trait.

Reverberation: Gain a Riven. She gains 40 Ability Power and her Ability is additionally cast on her lowest Health ally.

Triumphant Return: Gain a Riven. Combat Start: She grants herself and adjacent allies a shield for 15 seconds equal to 40% of their maximum Health.

Vayne is a backline DPS that also has three traits like Riven. This time, her traits are centered around her carry potential. Duelist will give her good attack speed, while Recon gives her survivability. We expect most Vayne comps to either lean more toward Duelist, or be a more well rounded comp rather than go heavy into Anima Squad.

Spread Shot: Gain a Vayne. Her Ability additionally fires at 2 other nearby enemies dealing 50% damage.

Miss Fortune is the last of the Anima Squad units, and her ability packs quite a punch. She’s had this ability before, in both Set 1 and Set 3, and it’s making a comeback. Ace is a powerful trait, giving her the ability to execute. Even if she isn’t the main carry, having an execute makes her a strong contender for any team comp slot.

Bunny Mercenary: Gain a Miss Fortune. Her Ability covers a wider cone and she gains a 300 Health shield while channeling.

Make It Rain: Gain a Miss Fortune. After every 3 player combats fielded – she grants 18 gold.

There are a lot of Anima Squad Augments to choose from with the new Hero Augments system. Since the Set is still in development, feel free to try them all. Build around Nasus, Vayne, Miss Fortune, whoever you want.

After 10 seconds of combat, your units heal % of their missing Health.

Since Anima Squad units stack health with their trait, this augment gains more value as your units are naturally tankier.

Aura items that buff your team have their effects increased by 33%. Gain a Locket of the Iron Solari.

I recommend this augment specifically if you build Protector’s Vow. Protector’s Vow is an aura item that will give your team bonus health. This also scales based on your units max Health, which is perfect for Anima Squad.

Your units that start combat next to a unit with over 1650 Health take 13% less damage for the rest of combat.

The pattern continues. This is another augment that works well when you have a team of high Health units.

Here’s a comp starring Vayne as the main carry. The comp doesn’t go all into Anime Squad, but uses a variety of traits to get to the end game. 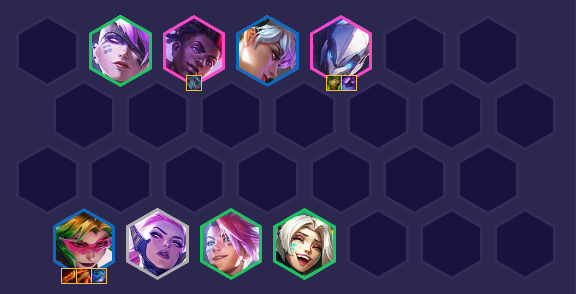 Anima Squad isn’t too different from traits we’ve seen in the past. It provides a nice damage bonus, but the stacking Health bonus is quite unique.

Even still, bonus Health is quite a simple concept, and there are ways to make it better with good items, augments, and more. Even if the bonus Health is just a little bonus, the trait is quite flavorful, and a fun one to try out.