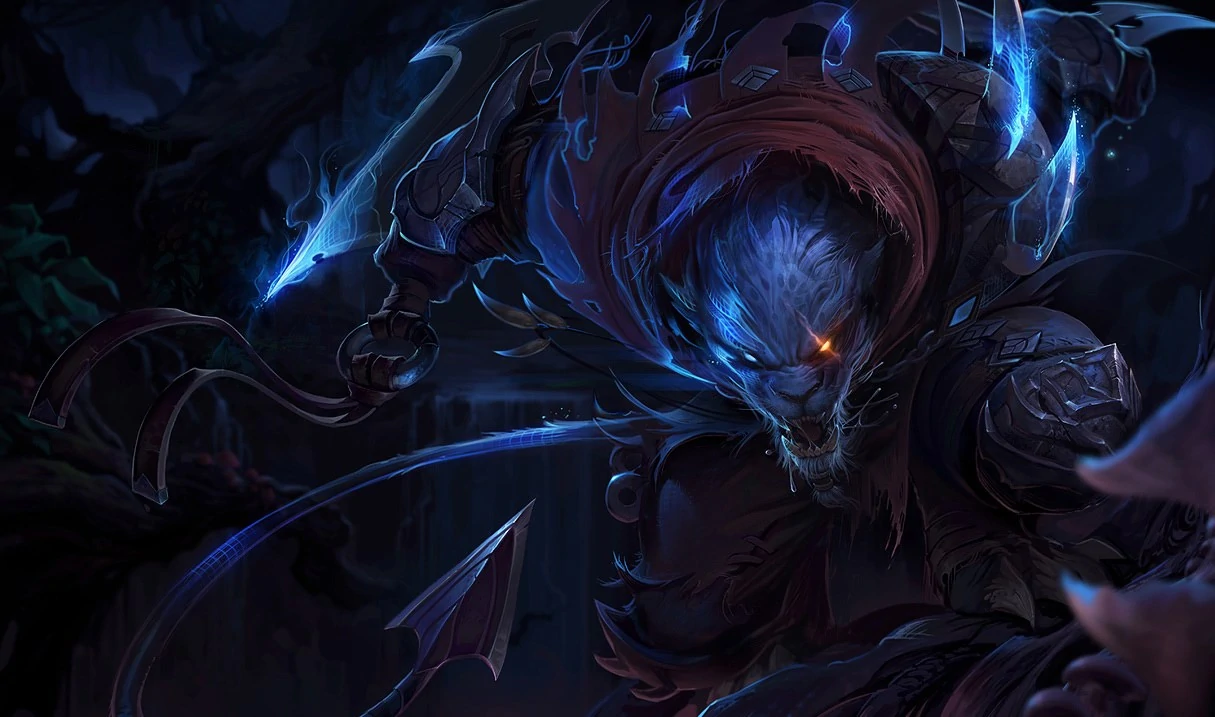 TFT’s new mid-set update, Uncharted Realms, has been out the on PBE for a little over a week now. Even though things change on PBE a lot, there are still some lessons we can take for the official release.

Darkflight is a new and unique trait that has been added with Set 7.5.

In this article, I’ll be going over how Darkflight works, the best comps to play it in, and some other tips to keep in mind.

If you want quick links to the team comps, here’s a quick list:

There isn’t anything to really compare Darkflight to. It’s pretty novel for TFT, which is quite rare.

The item will be chosen randomly if the sacrificed unit has more than one item.

If the sacrificed unit has an Emblem or a non-craftable item (like an Ornn item or Radiant item), each Darkflight unit will instead recieve Darkflight Essence.

Seems simple enough right? Just sacrifice a unit with a good item, and get free items for the rest of your Darkflights.

The Darkflight hex will be the same every game and will be where you place the sacrificed unit onto. You will also see an indicator in game to know this. 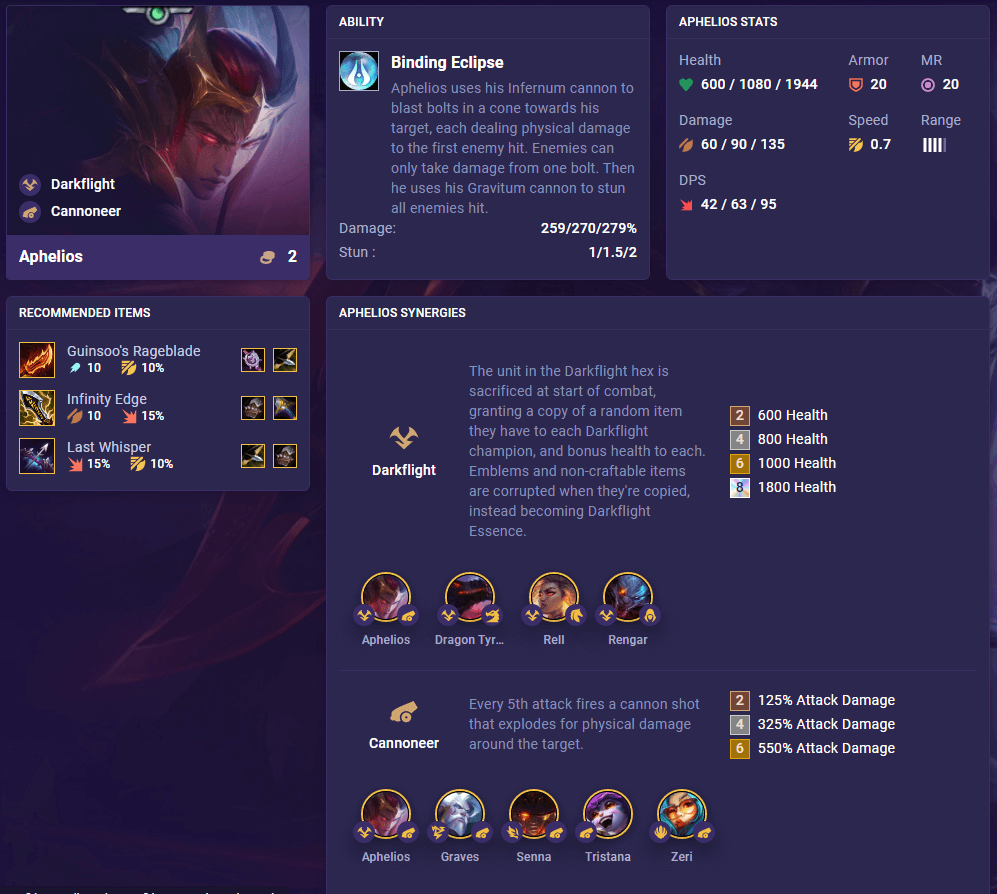 Aphelios is a Cannoneer AD ranged DPS unit that has both damage and a stun built into his ability. He can be a strong carry to build around with items, and the longer the fight goes on, the more he can scale with items like Rageblade. 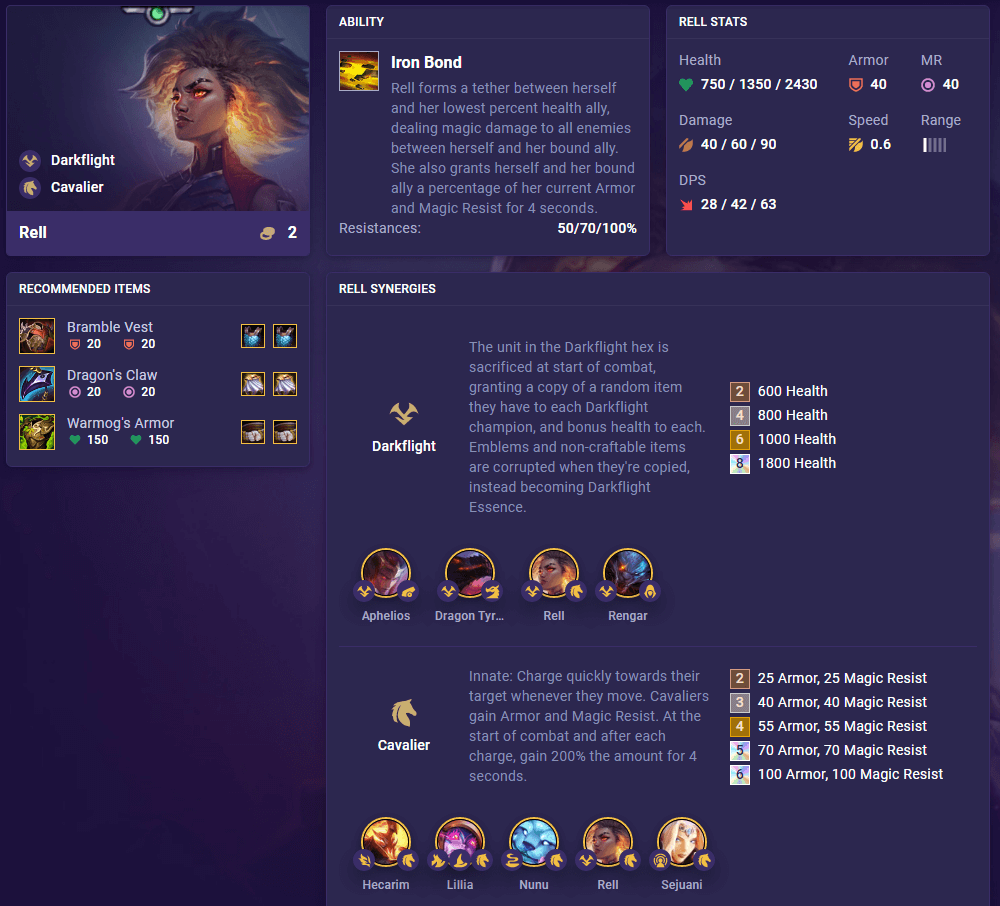 Rell is a 2-cost frontline Cavalier unit with a unique ability. She will bond to the lowest health ally, giving both of them resistances, and will deal damage to units between them. For the most part, she will simply be a frontline for Darkflights and make Cavaliers an easy fit for the comps. 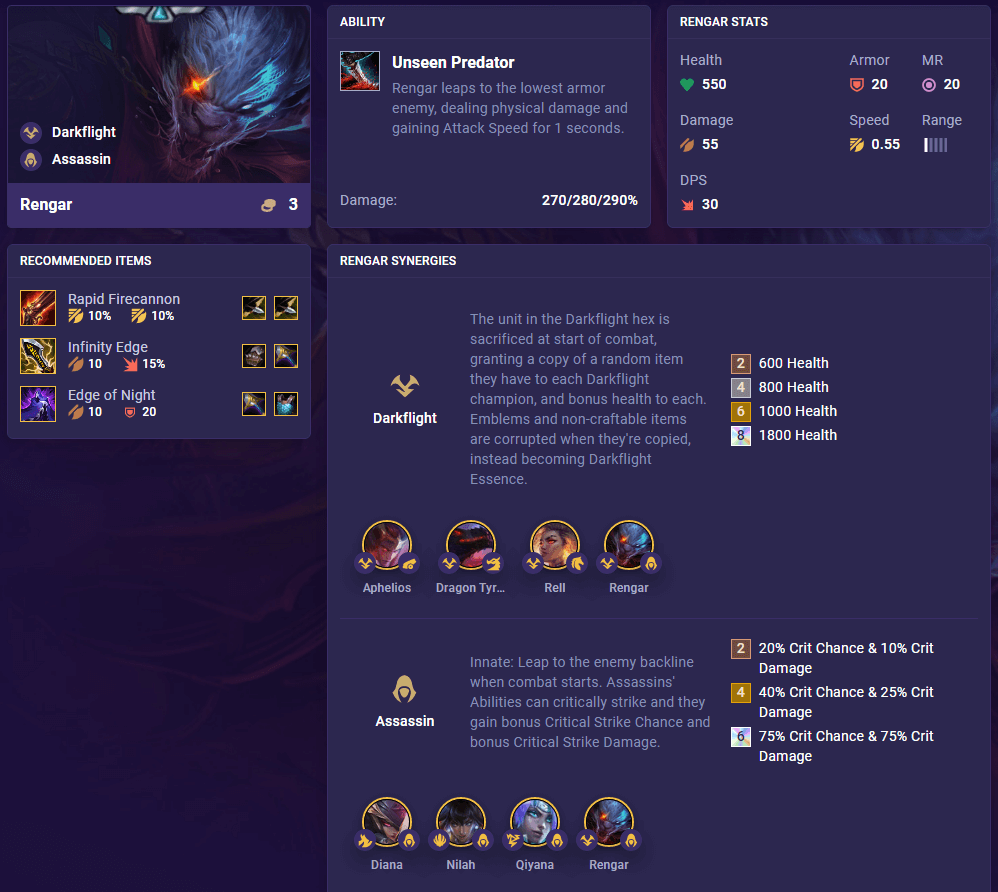 Rengar is the 3-cost unit of Darkflight and is an Assassin. His ability is reminiscent of many Assassins. He will jump around and swiftly attack until he lands on a tank and gets stuck. Aphelios and Rengar present two AD options for Darkflight comps, and you most likely will not be able to itemize both in one comp. 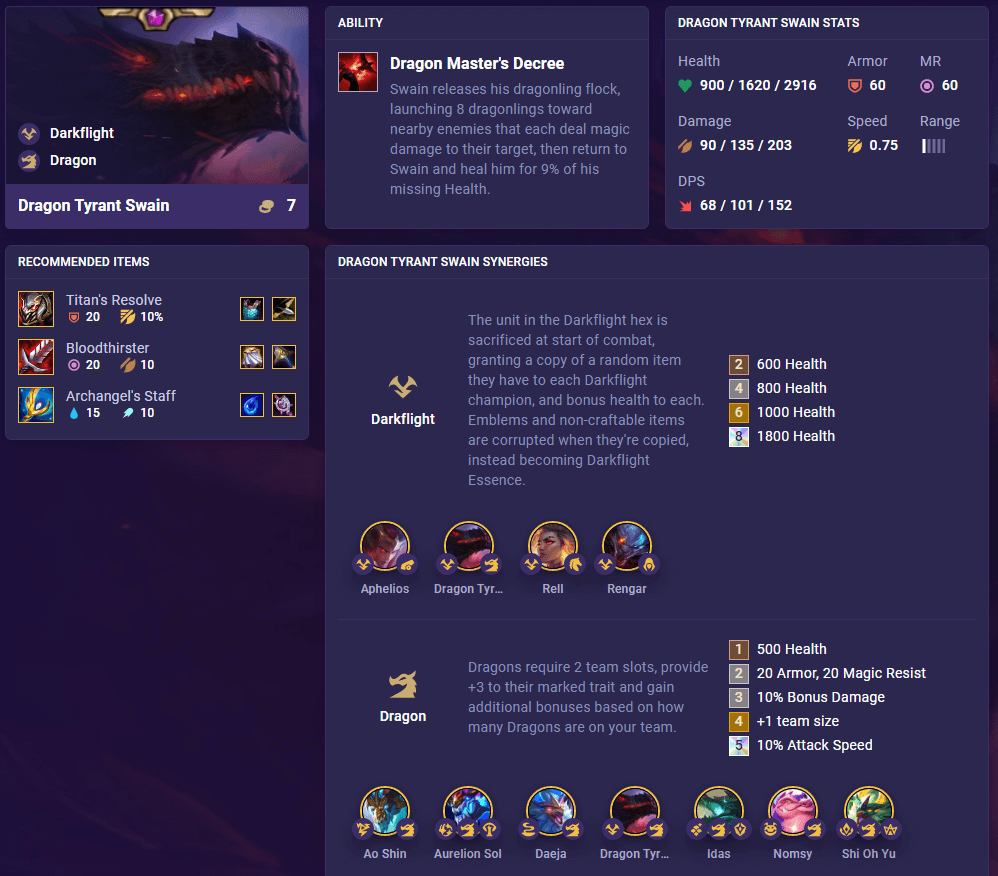 Lastly, we have our Dragon, Tyrant Swain. Swain is a monster tank that also deals magic damage and sustains himself. Swain fulfills the role of a frontline tank that can also carry the game. Swain is the only Darkflight that scales well with AP, so that’s something to keep in mind. Swain can be built around as a carry, or as a strong frontline to stall for other carries to deal damage.

The first thing to consider is that the Darkflight units, specifically Rengar and Aphelios, don’t have good synergy.

Luckily, Rell acts as a solid frontline unit, making her an easy addition to comps. But even still, there are issues with going vertical into Darkflight, which may make Darkflight stronger when you go only 4 or even 2 Darkflight.

So far in PBE, we think that these 3 Darkflight comps will have the most impact on the meta. For each of these 3 comps, we believe that Zz’Rot Portal will be the strongest item to use.

There are other items that can be strong, especially if you have access to Spatula or Emblem items, but these comps are something you can try in games more often.

This is a bit of a different take on Darkflight. While Double Trouble only using 2 Darkflight, this comps brings it up to 4. Swain is a big portion of that though, bringing 3 Darkflight with his Dragon trait. Much like the Aphelios comp, this comp looks to use Darkflight as strong frontline while we have a damage carry in the back.

Even if you don’t plan on playing with Mirage, you can still use the core of Swain with Titan’s Morellonomicon along with a Zz’Rot sacrifice for many other carries as well. Mirage just so happens to play nicely due to Nunu being a Cavalier along with Rell.

For example, you could run something like Ao Shin and Graves for carries while running the core of Swain and Rell for Darkflight frontline.

This will be the last example team comp we show running the Zz’Rot combo for frontline. This time, we build around Rengar as the carry and slot in 4 Assassins. Since Rengar is also a Darkflight, we take the 8th unit slot to use Aphelios for Darkflight 6. This will simply give more bonus health to Darkflights while also getting another Zz’Rot copy.

You could technically also itemize Rengar with only 2 items to get more free Zz’Rot value, but since he’s the main carry, you should probably 3 slot him when you can.

So far, we’ve only shown team comps that use Zz’Rot Portal as the Darkflight item, but we would be remiss to not show other items that are also very fun to use.

This one is definitely a bit of a meme, but if you have a ton of Darkflight units on board, and they all gain a Protector’s Vow, they will take a long time to die. Even still, you will want some damage on your team, and this item gets better/funnier when you have as many Darkflight units as possible.

Zephyr and Shroud of Stillness

If you wanna mess with your opponent and just annoy their team, these items are the way to go. Zephyr can be very interesting, as you potentially just play a 4v8 for 5 seconds. If you can clean up enemy units during those 5 seconds, Zephyr may be quite powerful.

Furthermore, Shroud of Stillness can be great for delaying the entire enemy team’s mana, but not every champion has an impactful ability, so this item definitely is a bit of a diminishing return.

Chalice of Power is quite an item if you want to buff up your Swain. This will give you basically two free Chalices to put on each side of your Swain. Aura items are interesting to use, but they may not necessarily be the strongest.

You can also look into each of the Aura items like Zeke’s Herald, Redemption, and Locket of the Iron Solari.

The issue with many of these items is that they will be spread out on many units. This means it’ll be hard to buff up your main carry or Swain, but rather you will gain value for your whole team.

All three of these Augments are quite nice for Darkflight comps. Darkflight Heart is less impactful, as most team comps will be built around the ideal number already, but it can be nice to save a unit.

Darkflight Crest and Crown are great because the Darkflight Emblem is twofold. Firstly, it saves a unit that you may not want to use. For example, in Darkflight Assassins, you can put it on Nilah and take out Aphelios.

Or, you can simply leave the team comp as is, and gain an extra Darkflight unit. The Emblem holder will gain bonus health, and a copy of the sacrificed item, making this item essentially a 2 for 1.

We already covered the Aphelios comp, but to reiterate, Double Trouble gives you access to arguably the strongest Darkflight comp currently.

This augment seems nice, and it definitely opens up a lot of possibilities, but we haven’t seen anything crazy come out of the wood works yet.

This just about wraps up everything you need to know about Darkflight at the current moment. Darkflight is very fresh, and players are having a lot of fun with it on the PBE.

Darkflight is exciting because it has such a variety of ways to play it. You can play it as a frontline core, as a meme comp with Zephyr, or even as the main carry with Swain and Rengar.

I’m 100% sure that I couldn’t cover everything about the new trait, but I figured these were the essentials. As we learn more about Darkflight, we will definitely be updating our meta comps to reflect new learnings.

So for now, maybe give these comps a whirl on PBE, or you can wait for the official release on Patch 12.17.