How to Beat Adept Dazzlers in TFT

Patch 10.22 is interesting because the meta not only has strong comps, but many of the strongest comps use the same frontline.

The combination of the 3 Adept units alongside Morgana and Lux has become a staple core that can be flexible to fit many different comps.

On our website right now, we have 6 comps in S and A tier that include the core of Adept and Dazzler. While this will likely be changed next patch, it is still frustrating to play against, so let’s get right into the guide.

To start things off, I should begin by saying there isn’t much that you can do against the Adept synergy. The trait will debuff your entire team’s attack speed and can only be avoided with things like Quicksilver.

Having a Quicksilver on your main carry will allow them to ignore this debuff, but the rest of your team will still be susceptible to this effect. 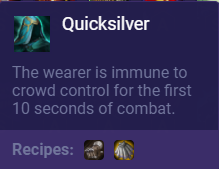 The most important counter measure to Adept units is your frontline positioning. Let’s take a look at all of the Adept abilities. 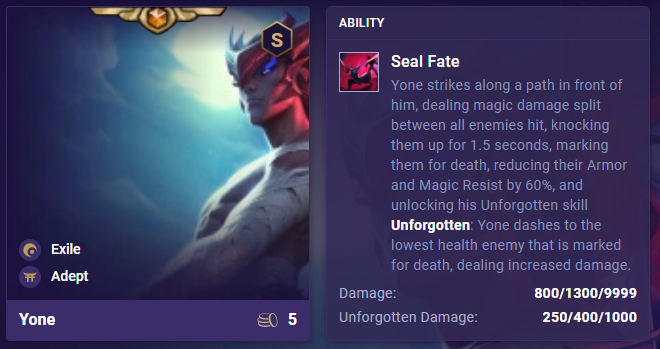 All three Adept units have very interesting abilities, but they all are similar in that their abilities go through their target.

Irelia will launch blades past her target, Shen will dash through his target, and Yone will also strike past his target.

This means that when playing against these units, mainly Irelia and Yone in particular, you can position your frontline in a way that your units won’t get hit by these abilities.

Take a look at an example positioning like this. 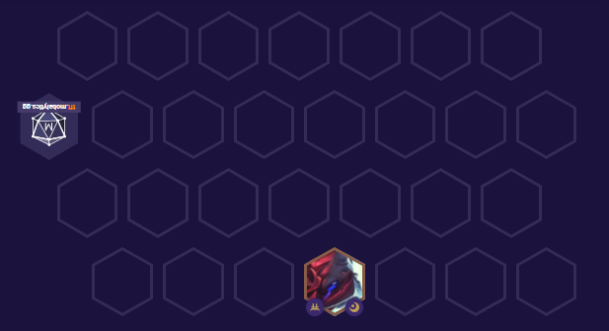 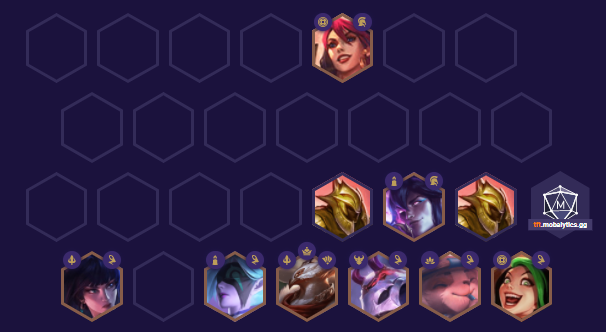 In this scenario, if the enemy has either Irelia or Yone in the hex slightly left of Sejuani, their abilities will pass through Sejuani and his most of your backline.

To remedy this, you simply have to adjust your frontline slightly in order to have the enemy Yone facing toward your left. 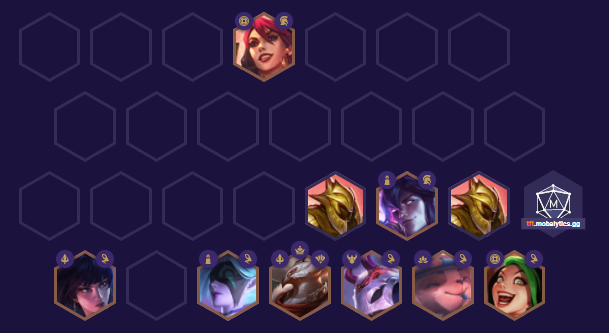 In this scenario, all you did was move Sejuani one hex to the left, but this can have a huge impact against Adept units.

By doing this, Yone’s ability will target toward the left, which will keep your backline safe from his first ability cast.

If they are fighting each other, in most cases, Shen will cast first, dashing past Yone and taunting him.

When Yone casts, he will then do so toward the enemy team, since Shen dashed past him. This will make Yone’s ability only hit Shen, keeping the rest of your team safe.

Dazzlers have another annoying ability that debuffs your team’s attack damage. Just like Adept, if your main carry has Quicksilver, they won’t be affected, but other units are still prone to this debuff. Also in longer fights, when Quicksilver wears off, you won’t be able to resist this debuff.

Since the Dazzler trait is dependent on ability, let’s go unit by unit.

Lissandra’s ability is simple but can be hard to position effectively against.

After the recent changes, Lissandra no longer hurls her daggers toward her target but flings them toward the enemy with the highest attack damage.

More often than not, this will be your main damage carry unless you are a magic damage comp.

The best way to position against Lissandra is to try and have a unit block the dagger.

Putting a unit in the path between Lissandra and your carry can be simple when the fight starts, but as the fight continues and units move around, there isn’t too much you can do against this.

Another ability that is fairly simple to understand is Lux. She will fire toward the furthest unit, and stun any units hit along the way.

Players will often place Lux in a corner of the map, so the simple solution is to put a bait unit in the opposite corner and have your team comp along the same side.

The problem with this solution is that in the late game, the enemy will have an easier time repositioning their Lux, while you have to reposition most of your team to effectively counter Lux.

You can get creative with how you position depending on your team comp, so try out different things to counter your opponent.

Unfortunately, there isn’t much you can do against Morgana’s ability. When she casts, she will pick two random units and cast her ability where there are more units.

You can try drastic things like splitting your team in half or putting more bait units off to the side, but Morgana is often paired with Talon.

Leaving your backline unprotected will give him an easier time while grouping them together will allow Morgana to deal more damage.

In all honestly the best thing you can do against Morgana is to simply have a stronger team comp. That can be a stronger Morgana yourself or just having a higher damage output than the enemy.

Ezreal is not very common currently in patch 10.22, but you should still keep his ability in mind.

It’s similar to Lissandra in that he casts toward the enemy with the highest attack speed, but his ability cannot be blocked.

If you happen to notice your team having a unit with high attack speed but is not the main carry, you can try to use them as bait to lure Ezreal’s ability away from your team comp.

Unfortunately, Ezreal’s ability is very large, and high attack speed usually correlates with a carry unit on many teams.

Ezreal isn’t super popular in the meta currently, but his ability can be a pain to deal with. I mentioned above that Morgana and Ezreal are difficult to deal with because there isn’t much you can do positioning wise to counter them. However, Shroud of Stillness is definitely a great item against those two units.

This item will help against Lux and Lissandra as well, but Morgana and Ezreal have high mana pools, so this item is a more effective counter against those two units.

Simply place this item in front of where Morgana or Ezreal is, and let the item do the work.

Delaying their initial cast will delay the damage of the enemy by a significant amount. This can allow your team to get through their frontline before they get through yours.

This wraps up a few of the tips I have in order to counter Adept and Dazzler comps. While I’m sure there are many more things you can try, these are a few of the things I’ve noticed while playing and watching other TFT players play.

If the enemy team is simply stronger than yours, there isn’t much you can do. But if the odds are close, you can definitely use a few tactics to shift the odds in your favor.