On a good reveal day we might get a dozen cards, but today we get twenty seven…

Well, not quite, but I’ll tell you all about that in a moment.

I’m Jordan “WhatAmI” Abronson and if you thought Three Sisters was a cool concept I’m here to let you know that all of its siblings just showed up to play Runeterra.

The main way we’re going to need to evaluate each of these new spells is as follows.

Criteria one: What is the default state, as in what option will we generically be expecting to choose when we put this card into our deck? This is the most important as it will occur the most often.

Criteria two: how powerful are the other options. When we do take these options, how important is it going to be that we had access to them? Will they swing games?

Criteria three: Is the added power worth the added mana that got stapled onto our default state. Because in this game one mana is a lot of cost, so we need to ask if the flexibility we gained was worthwhile.

Other considerations like casting additional spells may occasionally come up. Primarily though, these are the questions we need to ask when we look at whether or not we want to slot these Tellstones into our decks. 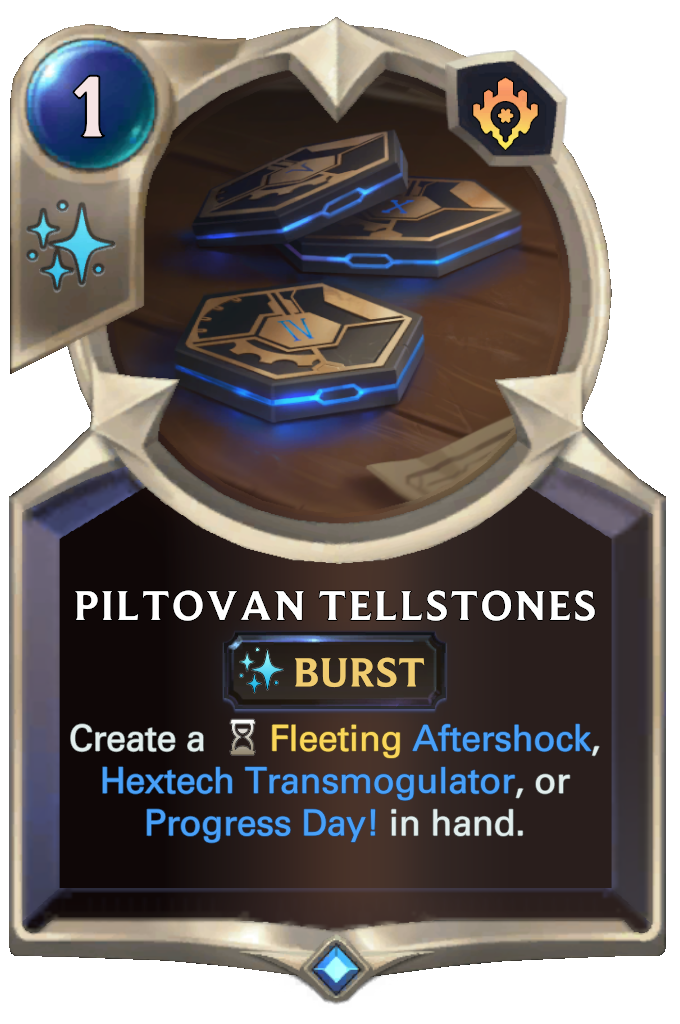 For Piltovian Tellstones our default state is likely Aftershock. It’s a perfectly reasonable spell in any midrange deck. Good flexibility, good burnout potential, I already play it reasonably often as a one or two of. The added options are actually quite impressive.

Hextech Transmogulator won’t come up often, but when it does it can be a removal spell for a problematic Follower. Progress day is a win condition all on its own in late games when both players start to run out of gas.

One mana is a lot. However, the added flexibility makes me think there’s a solid chance that this card is worth running over aftershock in the right midrange deck in the right metagame. 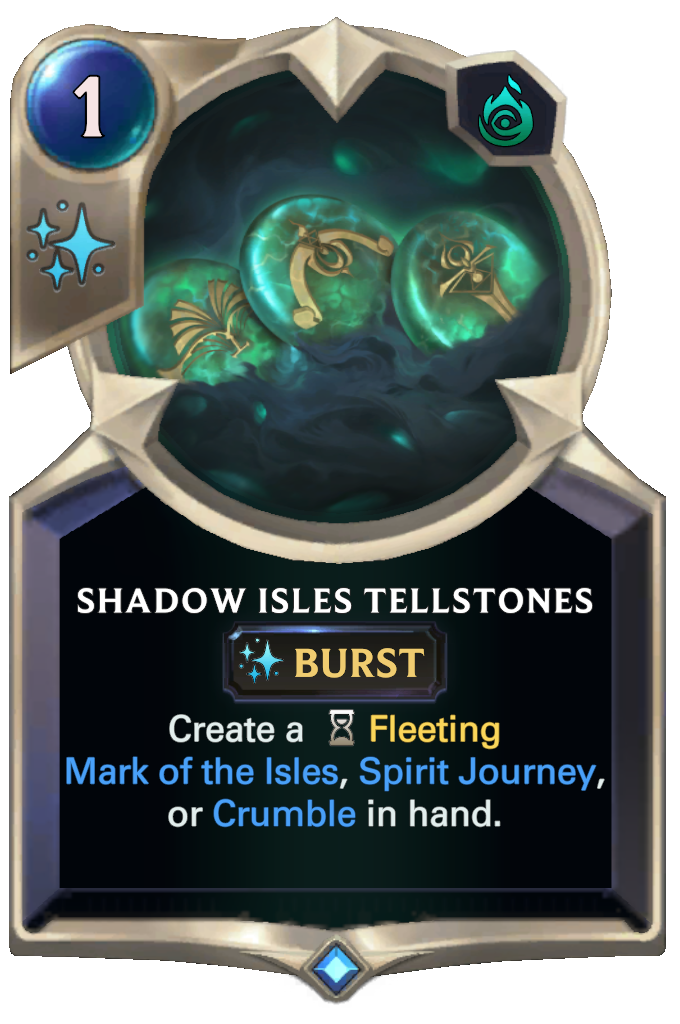 Alright, so the default state on this one is pretty garbage. Mark of the Isles is only something the most aggressive of decks have ever wanted in a main deck. That said the flexibility on this one is *HUGE*.

Shadow Isles control decks have never had a way to reasonable main deck landmark removal at any cost. That has made them historically extremely vulnerable to decks like Tree, Thralls, or Disc. That just changed.

When you have a card that can take a small chump blocker and turn it into an actual trade, or stop an attack, that can also be a piece of bad removal or landmark removal, that’s suddenly main deck-able. I expect to see this as a one or two of a *lot* in hardcore control lists. 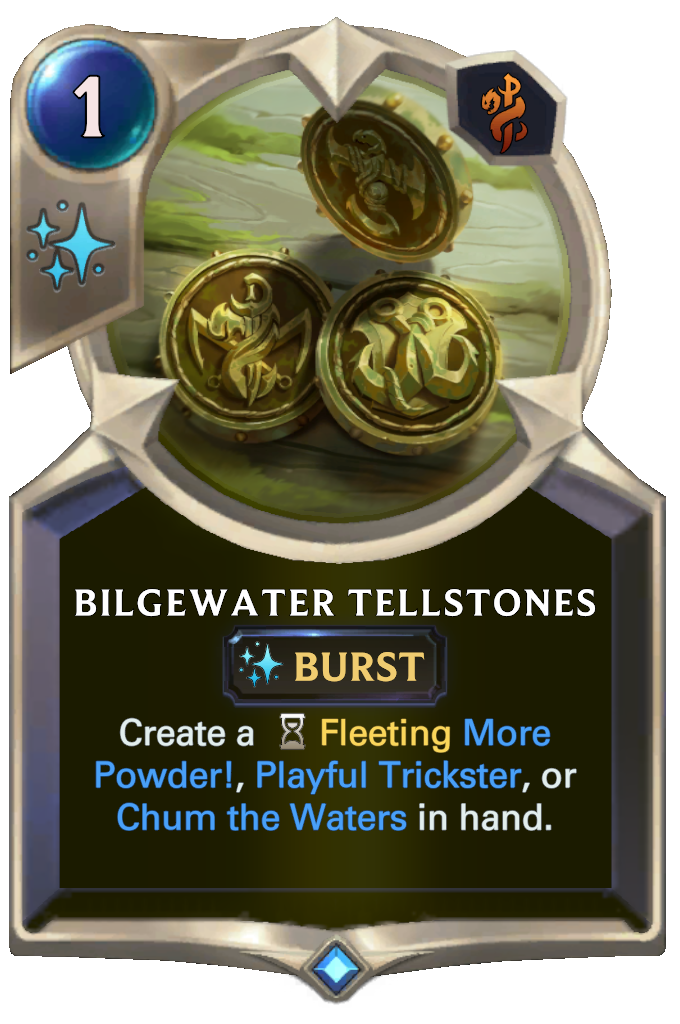 Alright, this one I’m going to admit I am much less impressed by. Yes, I get that having access to Rally is powerful, but we just got a five mana rally that does face damage and can’t be fizzled by killing one of our units.

I don’t think that adding two cards that are generally pretty awful to the back of that is going to make it worth the switch.

I can see situations where Chum the Waters or More Powder do good things, but they are mostly desperation moves, and I hate planning for that. This one is a thumbs down in my book.

I think our default for this one is Heroic Refrain. That’s a card that never really saw main deck play, but was occasionally a blowout off of a Conchologist. It’s a solid buff spell.

For our extra mana we get potential access to Landmark or large unit removal, or maybe a little bit of very bad card draw?

This feels all in all like a very bad version of Conchologist we didn’t really need in Bandle City. Not buying it. 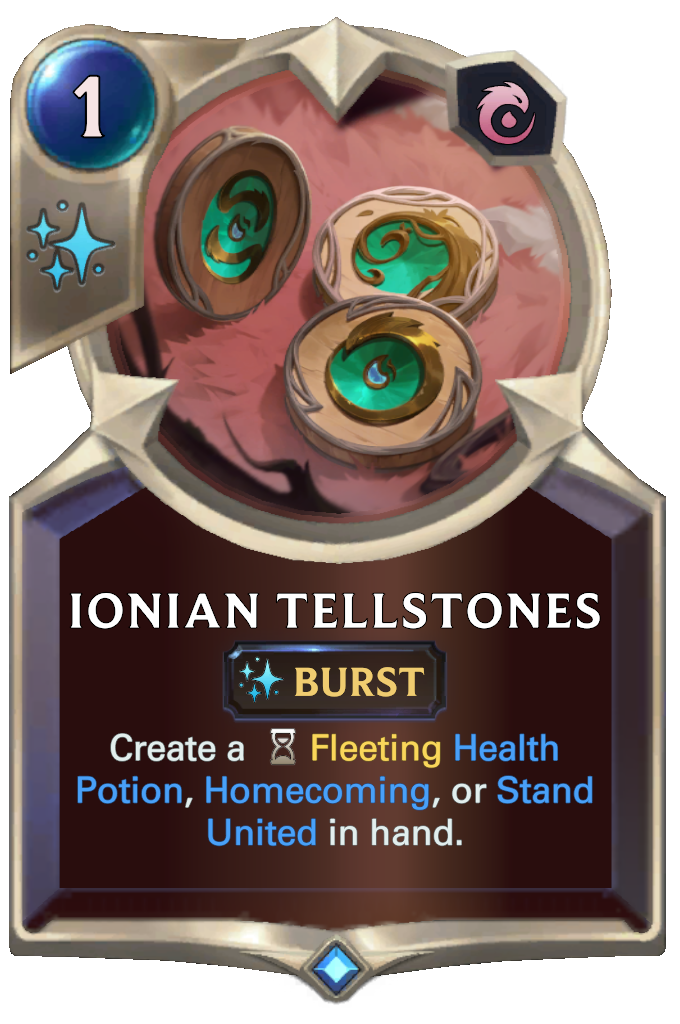 Alright, this one I am more on board with. I think our default state here is Homecoming, which has proven to be a pretty impressively powerful card in certain meta and game states.

Tacking the ability to have a touch more survivability against burn on to the back end of that is a pretty big buff.

Stand United won’t come up often, but will occasionally do some truly silly things like jumping a Viego into an open spot for the killing blow.

I would not be surprised if there is a deck that wants this flexibility and can do some very worthwhile things with it. 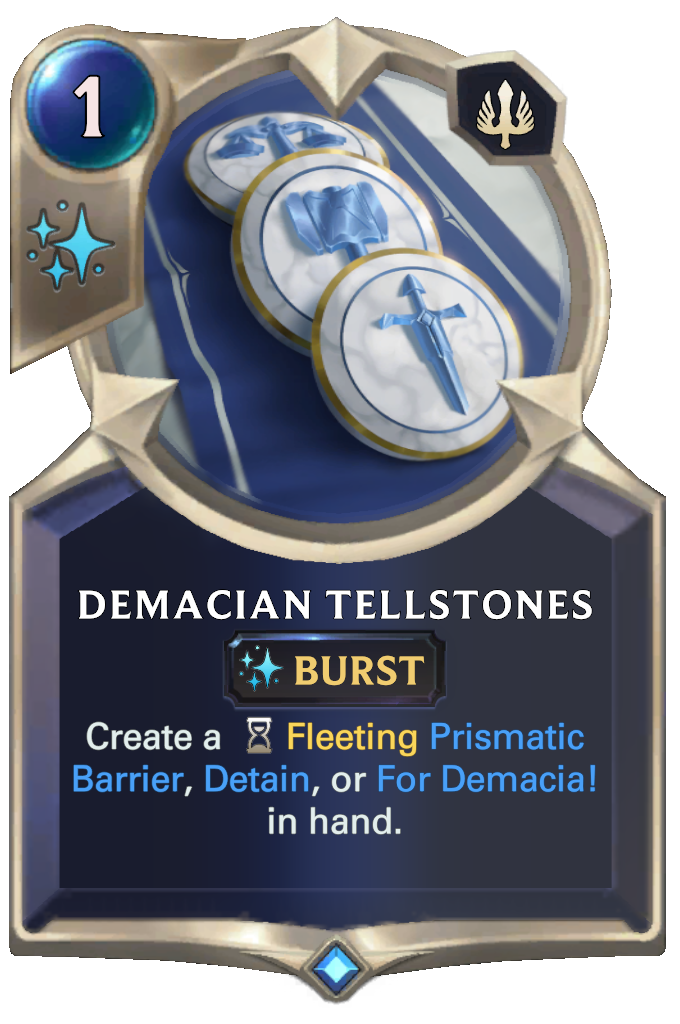 Alright, this one is my favorite so far. Why you might ask? Well, Riposte saw play for a long time and more than half the times you played that card you did not particularly care about the added attack.

Instead of +3 attack, this version gives you access to a hard removal spell or a potential game-ender on a wide board.

That seems like a *very* solid tradeoff to me. If some kind of Shen/Fiora style deck manages to exist again it will love this card. 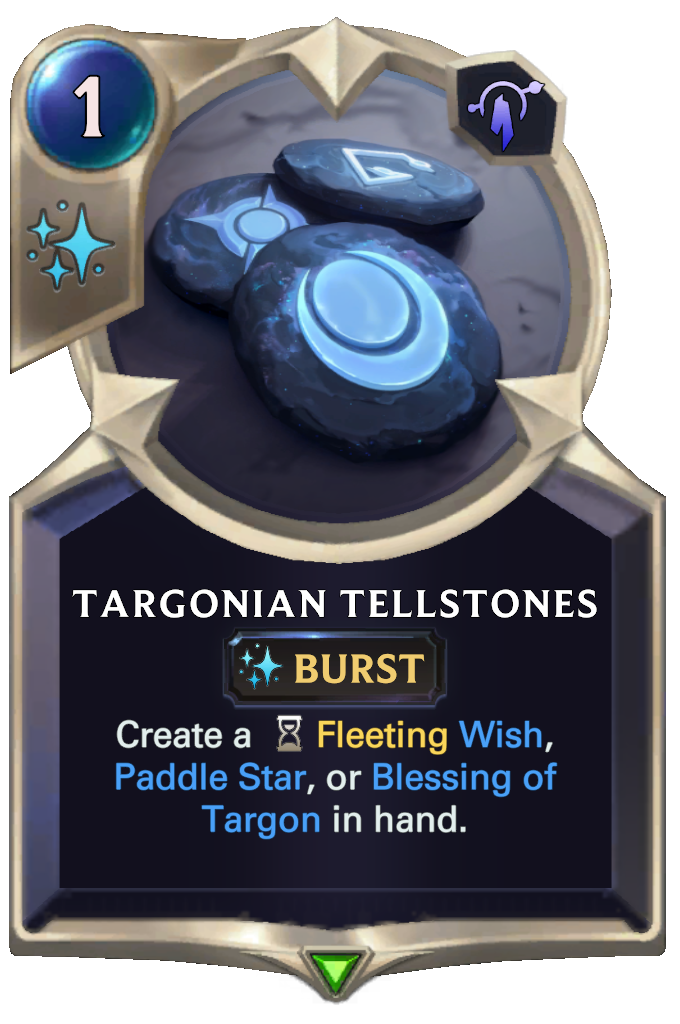 Ok, um, this one kind of fails at the first hurdle. Unless you want me to say that Paddle Star is our default draw here, we kind of don’t have one.

All three of these cards are extremely awkward and don’t see main deck play for a reason. Adding mana is not going to help their case. I’m not seeing it.

Oi, now we have kind of the opposite problem. Both Whirling Death and Sharpened Resolve can do some pretty impressive things. I’d even say they are solid enough that I don’t mind having the late game option of Weapons of the Lost stapled onto them for the extra mana. There’s just one problem.

The decks that love the things those cards do tend to be extremely tempo-oriented. That one extra mana is a bigger cost for those archetypes than any we have talked about so far.

I love the options here, but I think the added mana might be too much for the Noxians to let this one make the cut. 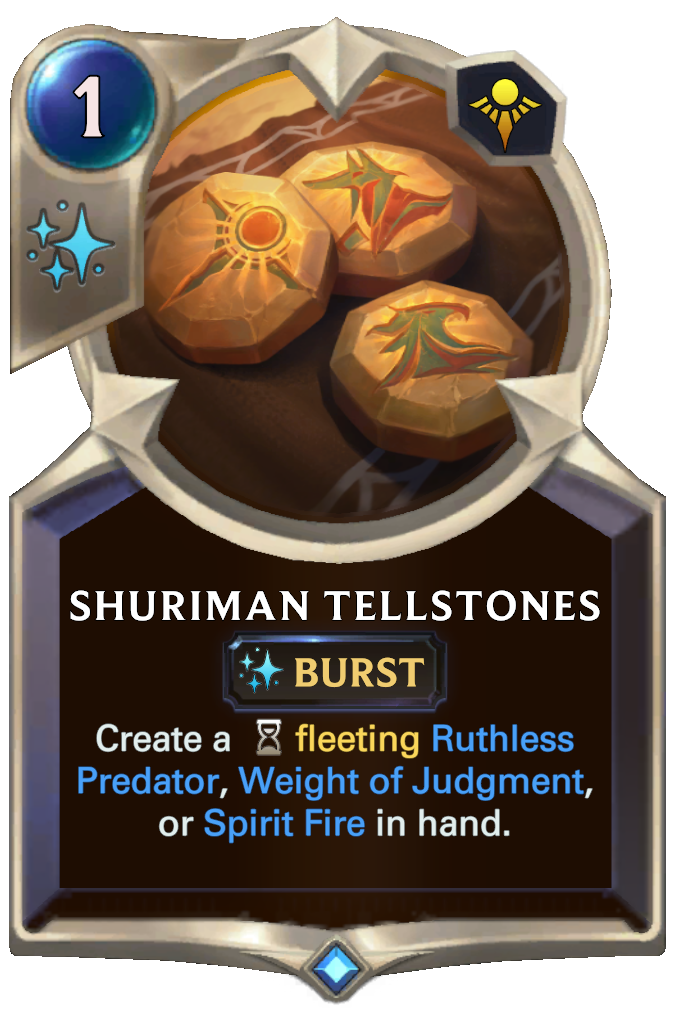 Now this one has some solid things going for it. Ruthless Predator and Weight of Judgement will both often look like solid removal spells in the right decks.

Adding the ability to accidentally have a burst speed board clear and ability to survive swarm decks open attack is a *huge* buff to those spells.

Add to that the fact that Shuriman tempo decks often are ahead enough they can spare the extra man for the options they get and I think we might have a winner.

In fact, I think we might have a lurker. 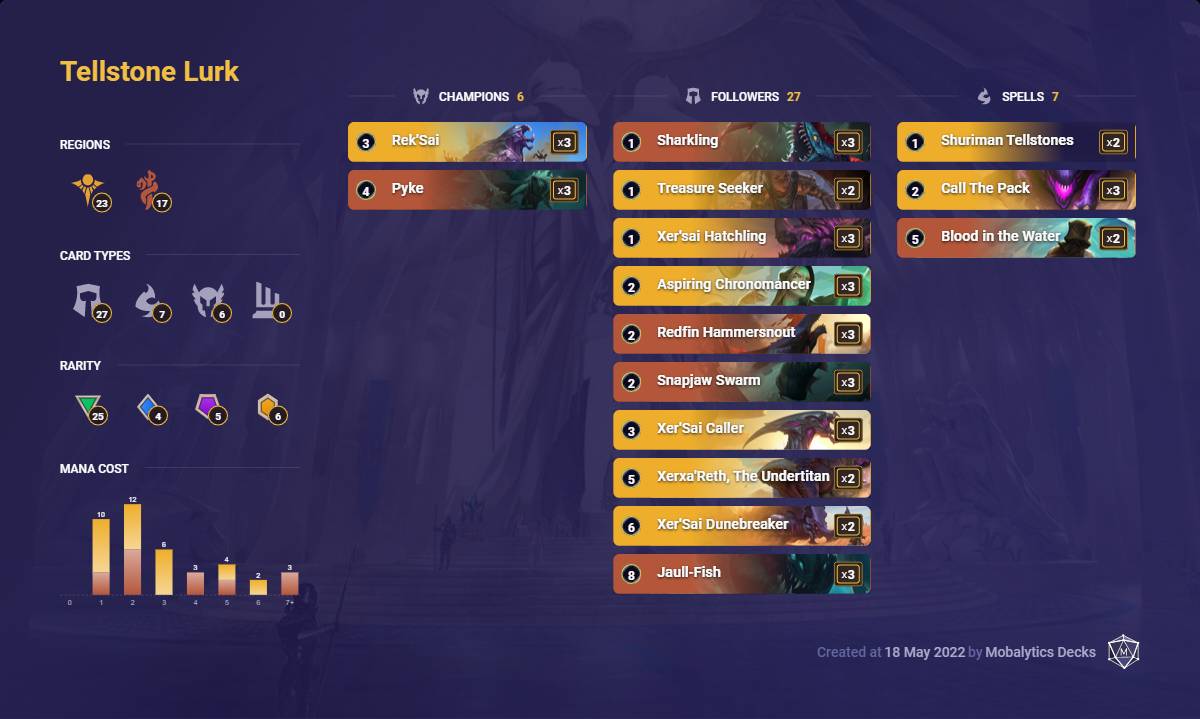 One of the biggest problems with Lurk has always been its flexibility. The constraints on this deck are tighter than they are on literally any other deck in this game. When you’re effectively trying to proc allegiance ever turn they have to be.

That said, you tend to have quite a bit of extra mana lying around. And I think this is the perfect place to showcase a few of our new cards.

Fast level on Rek’Sai, stay alive an extra turn, or blow up a problem follower? Sign me up.