Woah hold up! We’re not even a week into the new expansion and we’ve already got new card reveals!?

It’s Trevor “Shugo” Yung here and just when we thought it was over, we’re going right back in

We’re revealing new Ruination cards every day on our spoiler page until its release on July 14th.

These are the four new cards we’ll be covering: 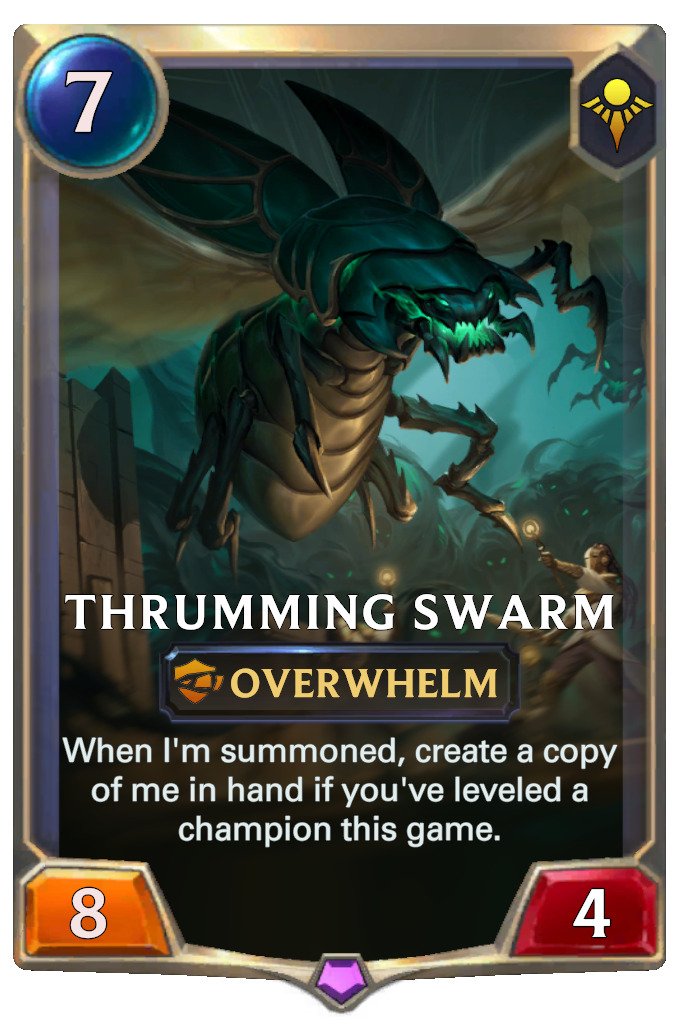 The kicker here is so long as you’ve leveled a champion, you’ll never run out of these. Due to this effect, it’s not as bad to make unfavourable trades because you can simply summon another one!

This card does suffer from the typical late-game drawbacks. It’s big, slow, and often too late to matter.

Four health is quite low meaning it will trade into much smaller units and is prone to cheaper removal.

However, Overwhelm gives this card some hope. As we all know, any large Overwhelm unit can be extremely threatening in the late game.

And just when you thought one was enough, there’ll be more right around the corner! 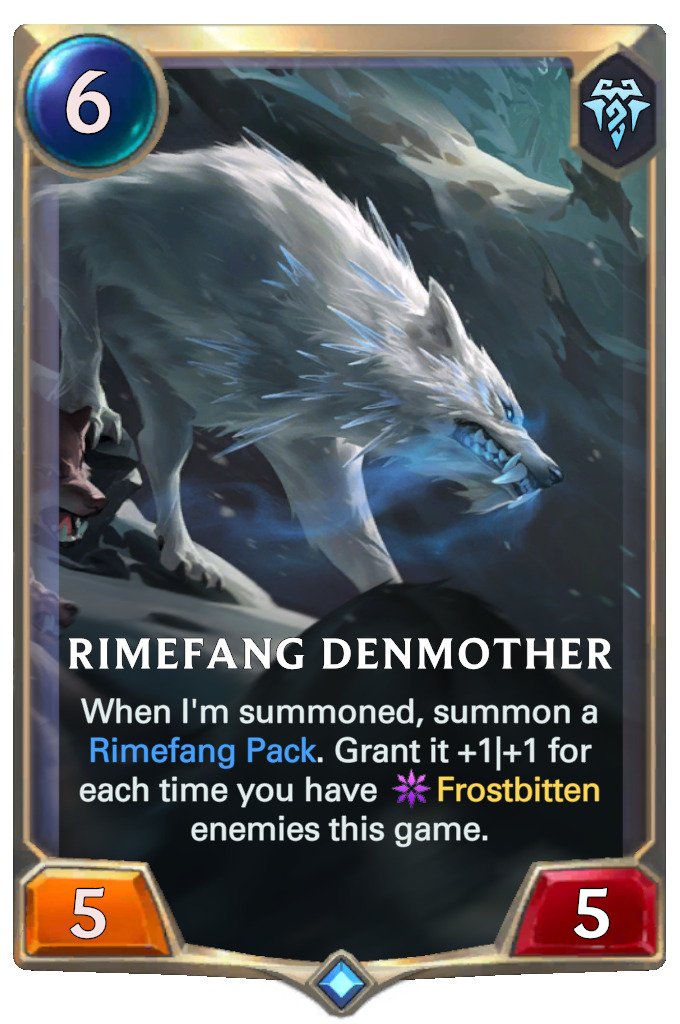 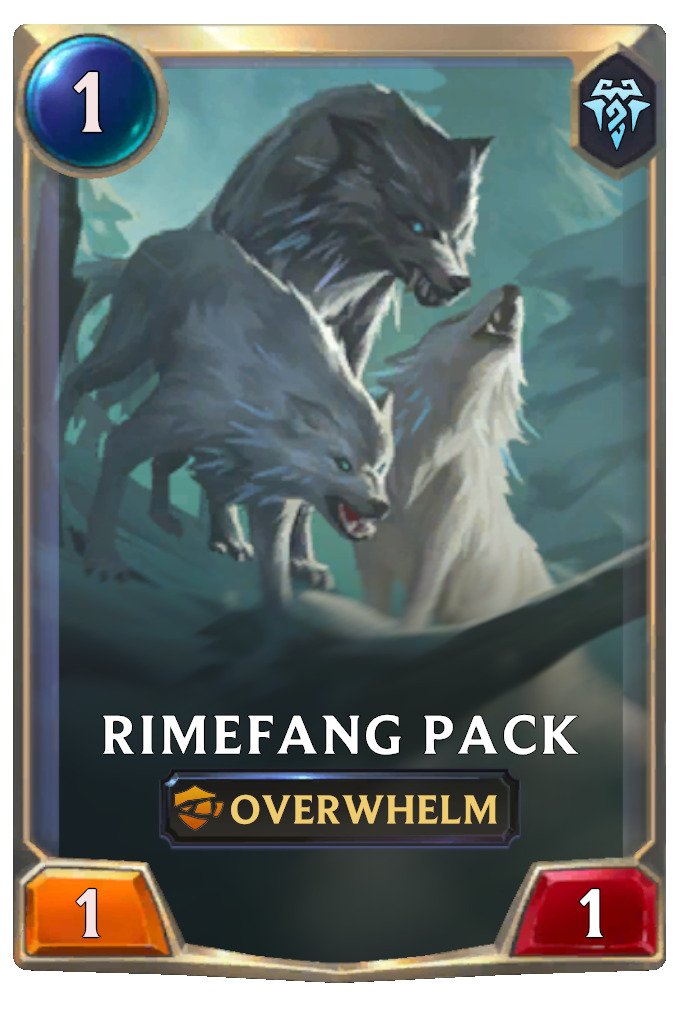 Next up we have a new Freljord follower. Rimefang Denmother brings some new midrange power to traditional Frostbite decks.

Ashe decks of the past have generally topped off around five mana with the exception to ones including Sejuani or Captain Farron. At six mana this card could fit nicely as a top-end power play.

The ability to summon two bodies for one card has always been strong in Runeterra. This creates two blockers with one action and can make the difference both on offence and defence.

To get the most value, we want to have Frostbitten enough enemies beforehand to make our Rimefang Pack a large enough threat. Four triggers to make it a 5/5 would be most ideal.

This gives us another 5 attack unit to work with Reputation, Reckoning, and Trifarian Assessor.

Out of today’s reveals, this is looking like the card with the most competitive potential. Though we’ll have to see how things look throughout the many days to come! 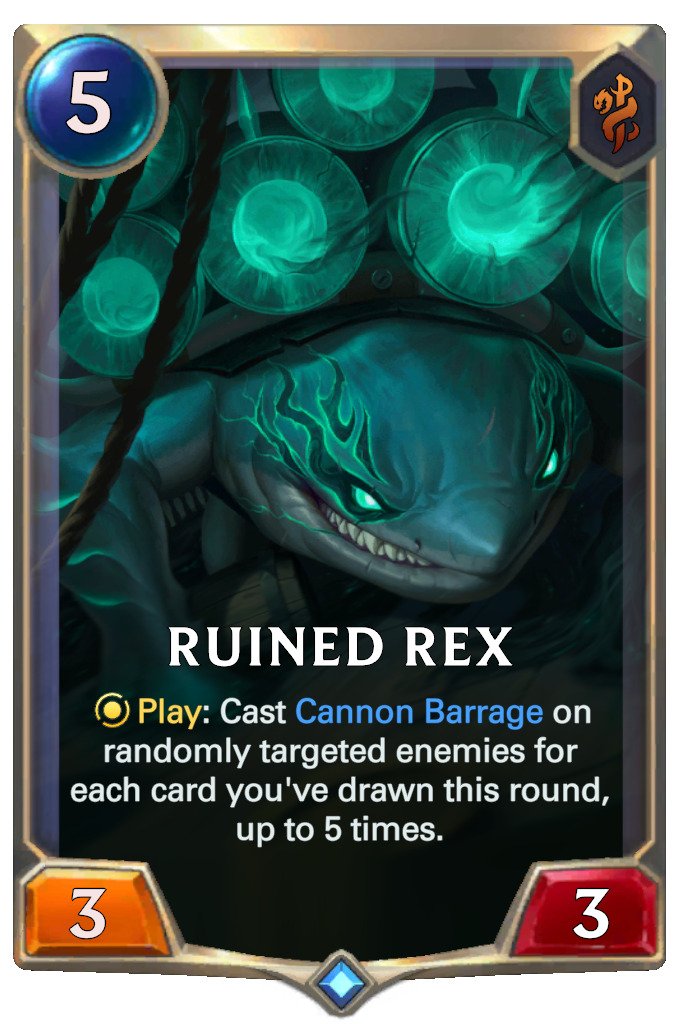 Now that’s a powerful effect for only five mana! Or is it? Ruined Rex brings us a spin-off of his traditional form. This time at a much lower mana cost, but much greater requirement.

Instead of triggering Plunder to enable the entire ability, Ruined Rex counts the number of cards you’ve drawn the round you play him.

Drawing five cards in one turn is a steep cost, and realistically we won’t be achieving this often.

Pick a Card is likely our best bet as we can invest the mana on the previous turn to set things up, although with its rework we’re only drawing two cards instead of its previous three.

Rummage used to be the most efficient means of card draw, allowing us to cycle through two cards for only one mana. Since the nerf to two mana, it’s no longer the optimal option.

However, alongside Stress Testing, there is potential to achieve the five card threshold without too much trouble.

Realistically, if we can draw three cards in one turn then Ruined Rex is quite reasonable. Cast Pick a Card the turn before, draw two fleeting, then your regular draw, and you’re already there.

Of course, there’s still going to be a large degree of variance as we can’t control the outcome of the Cannon Barrages. Sometimes we’ll be at the mercy of RNG. But that’s Bilgewater for ya!

When there’s an obstacle in your path, how do you overcome it? How long do you allow it to get in the way?

The two keywords are “you allow”. An obstacle is only an obstacle for as long as you allow it to be one.

Make a change. Work your way around it. Don’t make yourself the obstacle.

That’s all for now! See you next time with tomorrow’s reveal. Remember that you can keep up with all the cards at our spoiler page for the Ruination.