The Saltwater Scourge added two new champions Nami and Pyke to the lineup.

There is also a new reward for completing each champion with an A or better rankings.

Once you get all 5 champions with an A or better then you get a Gangplank card back!

The question is how do I get an A or S on each champion and what is the most effective way to do this?

Before reading this article if you don’t know the basics of how this game mode works, then please check out my other Saltwater Scourge guide. 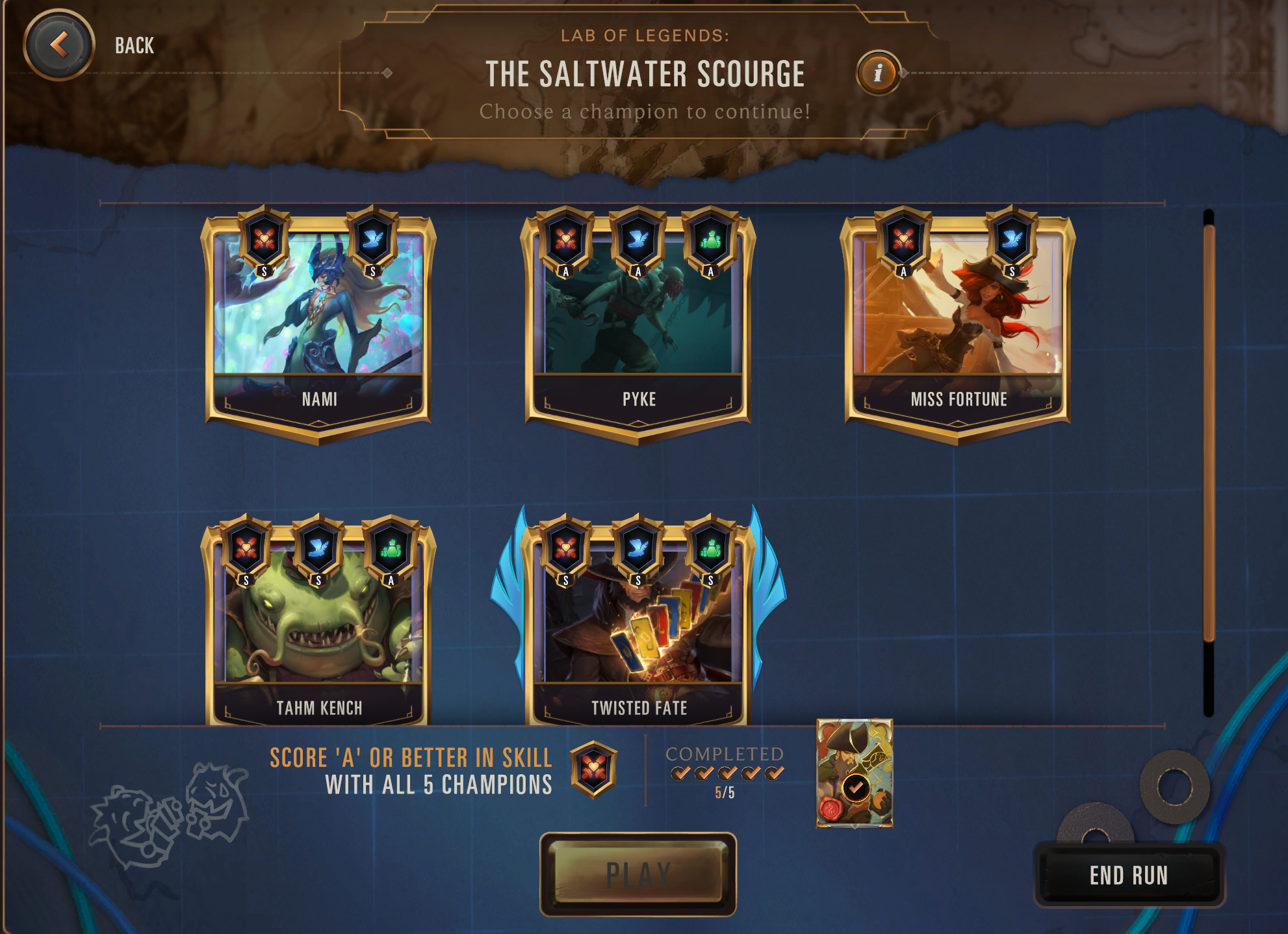 The ranking system is interesting and I feel like I’ve been able to crack a good number of parts of the system.

The first thing is that it will take the highest-ranking that you have received from any of your runs.

This means you can have a run that focuses on one of the categories.

For example, you can focus on getting an S in the Skill by not healing or dying while taking as much time as you want to get more heal cards and passive powers while healing against easier AIs to heal off of.

The first one is the Skill category. To achieve an S rating, you must win without dying or healing from the merchant.

If you don’t die, but you do heal at some point then you will receive an A rating. If you die at all, then you will automatically drop to a B. So, if you are needing to get an A or S in Skill and die once then restart your run!

The next category is Speed. I found that whenever I was under 40 minutes that I achieved an S score.

I can’t confirm these completely but I’d assume 40-50 minutes is an A. Once you are over 50 minutes and you are looking to get an A or S then you might not be getting it within 50 minutes.

The final category is wealth which doesn’t seem to matter very much. For Nami and Miss Fortune, I didn’t receive a ranking at all for them, but I still completed the champions themselves. 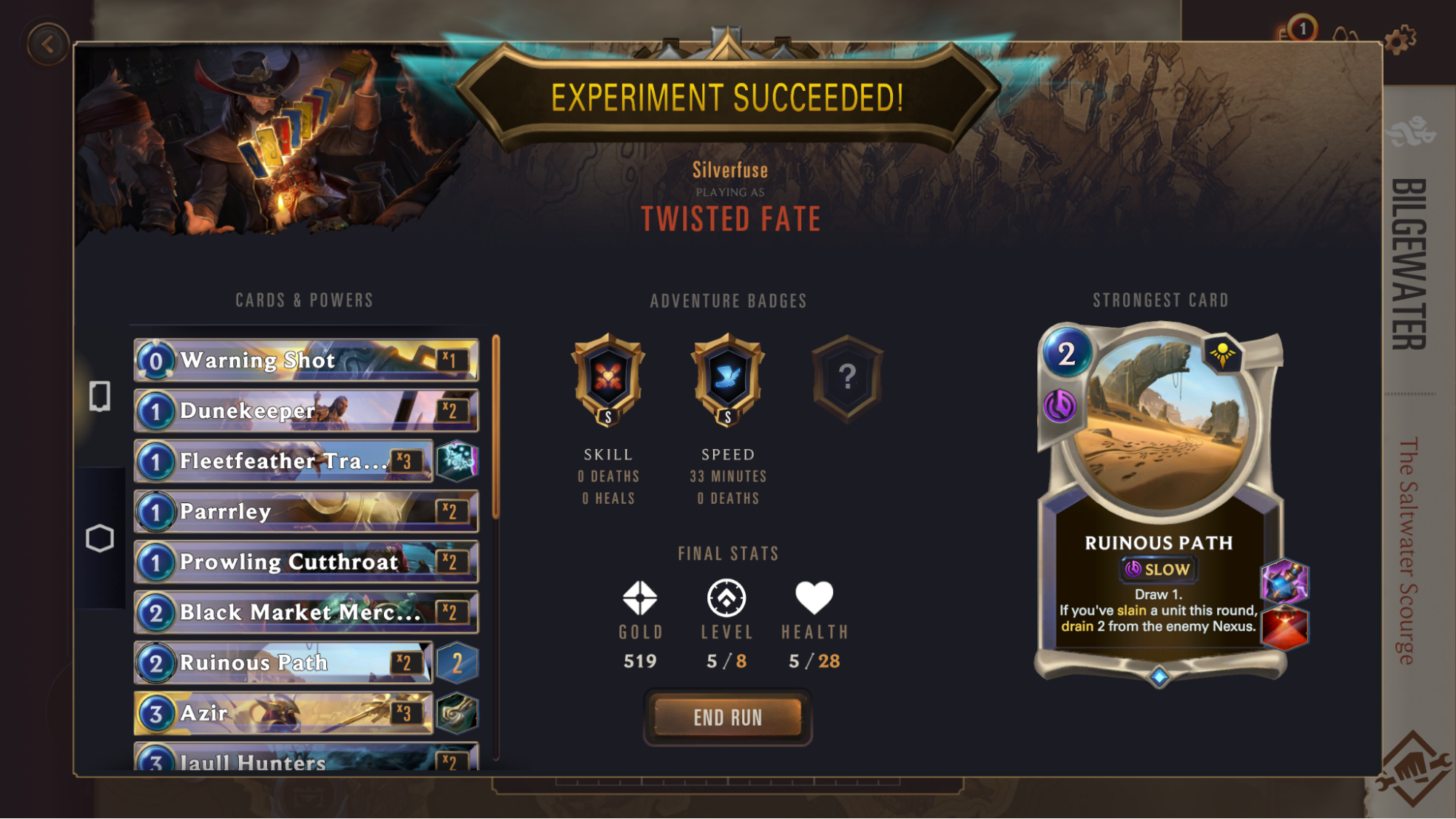 To achieve an S as I did with Twisted Fate, I did every single battle and took gold from every chest.

This makes me believe that some of this is just pure RNG if you get an A or S for completion. 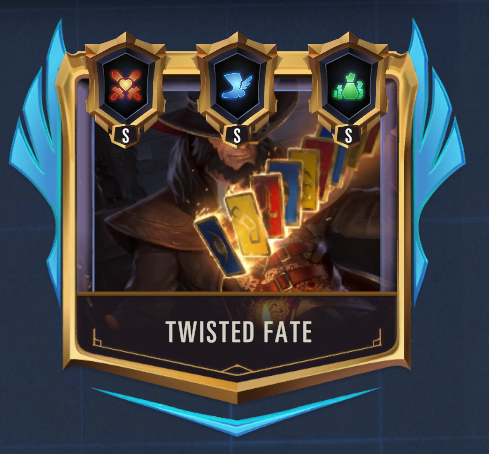 For my runs that I won in 32 minutes, I didn’t receive a Wealth ranking which probably means there wasn’t enough gold collected for the run.

Generally, I found that relying on a champion that you don’t originally start with to be your win condition is very strong.

You want to be drafting cards with the idea of how you will beat the Gangplank final boss. 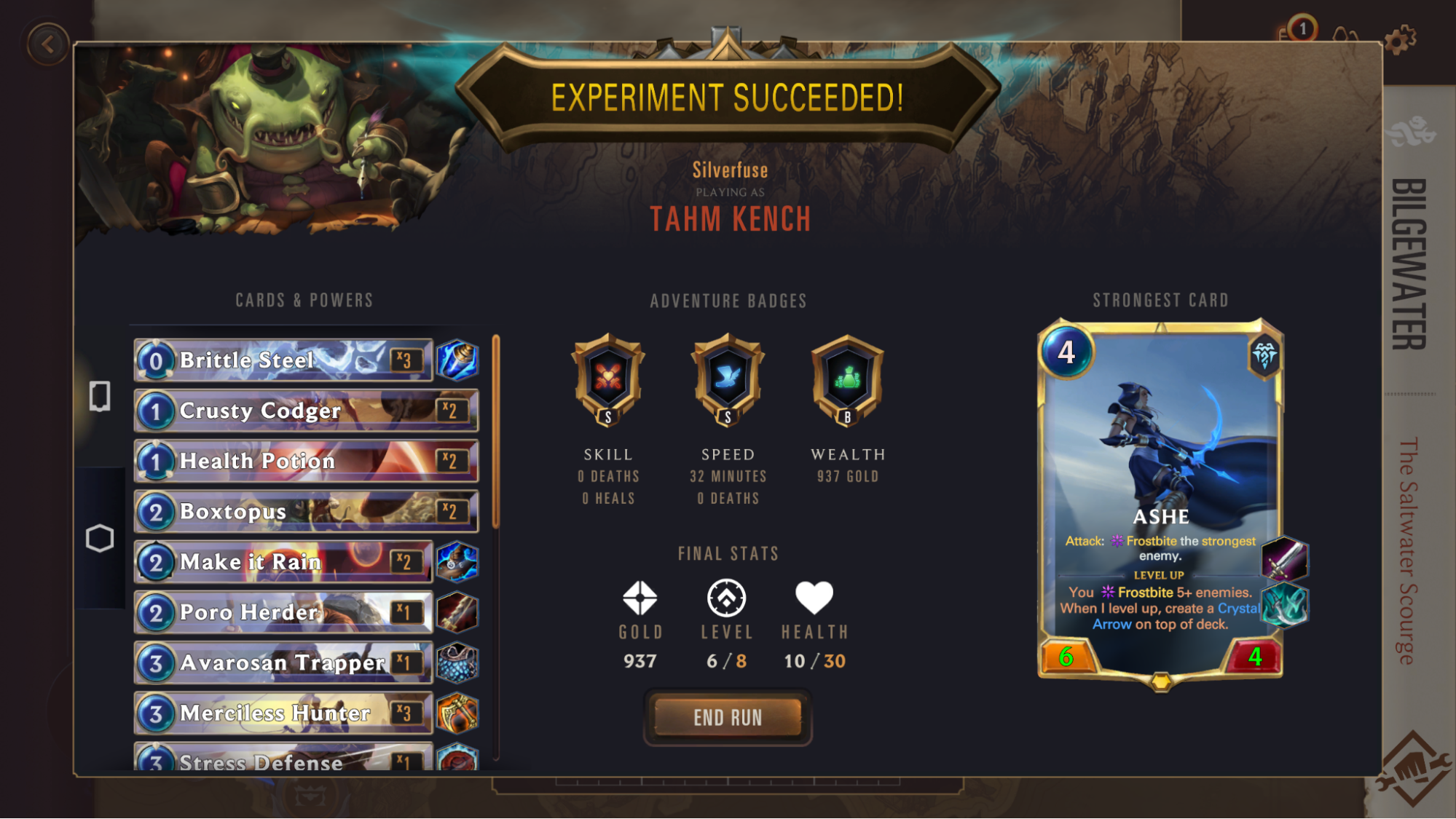 To do this, you generally have your best shot either killing him pre-turn 5 or around turn 8 or 9. If you are very aggressive you can win pre-turn 5, but the deck does have Make It Rain to be mindful of that.

Personally, Another way of beating Gangplank is winning a little later in the game. I found more success when I beat Gangplank around turns 7-9. Spells that remove the Keg such as Vile Feast, Death’s Hand, and Make It Rain.

This helps Kegs not do as much damage.

Another way to deal with the deck better is being able to remove Gangplank and Dreadway. I did this through either challenger units or hard removal. I found Minimorph, Scorched Earth, and Vengeance to all be very helpful in my runs.

For champions, I preferred drafting champions such as Sejuani, Sivir, and Gangplank who all present a win condition for my deck.

You don’t have to have a game-ending champion to win a run, but make sure you are considering how you are going to close out games especially against the final boss, Gangplank.

Another way besides having a strong champion to end the game is also having lots of attachments of ways to buff your cards so that you can block Gangplank without dying. I was able to do this in two runs. 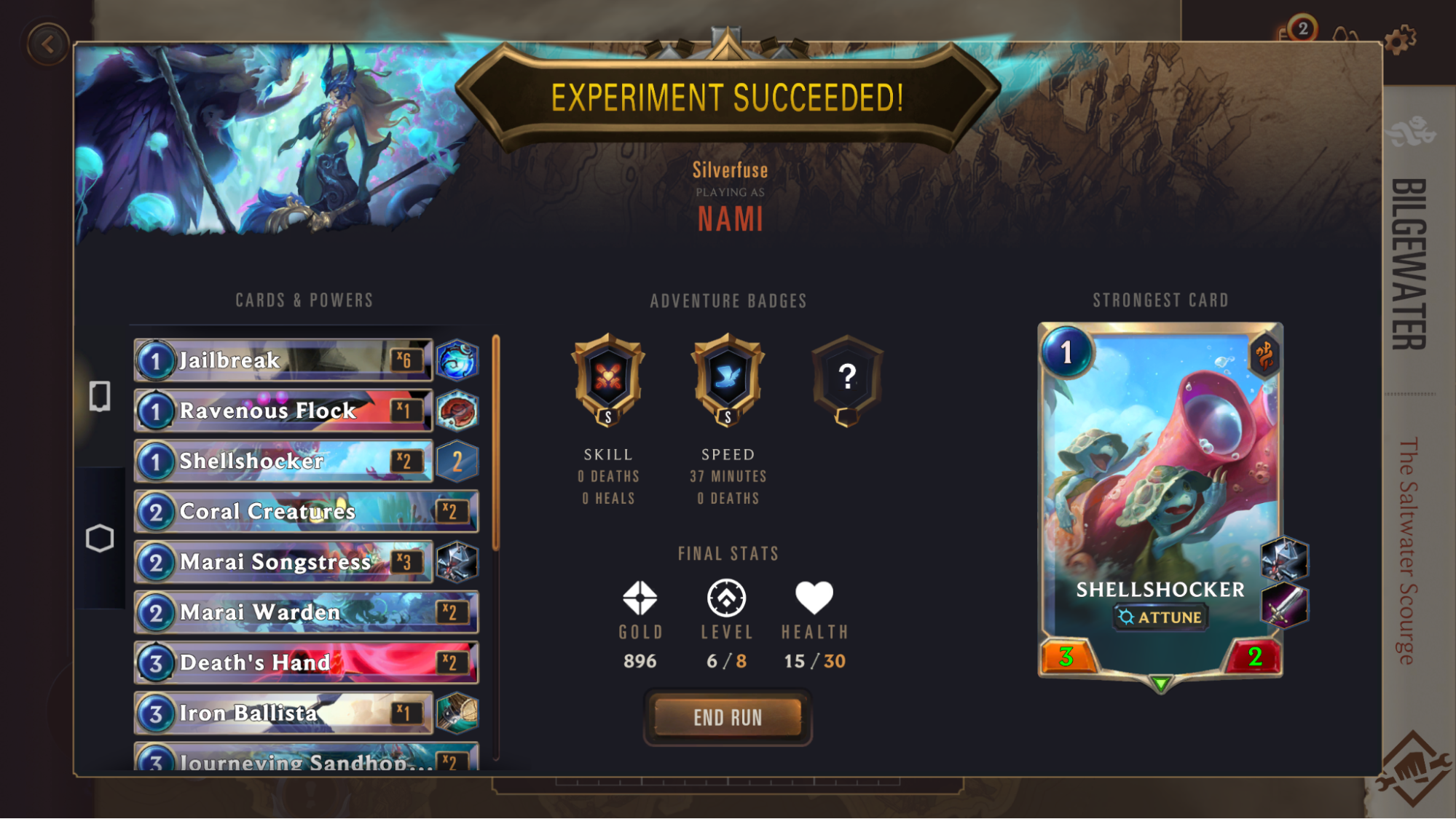 In my Nami run, I had a lot of attachments that either gave me +1|+3 or 3|+1 that allowed me to trade effectively with Gangplank. The other one, I had Raiding Party with Crush.

Crush gives all your units Overwhelm while Raiding Party gives +1|+1 to the top of your deck for each time you strike the Nexus.

This made one of my units a 12|14 on turn 6 which allowed for an easy block against Gangplank.

General passive powers, I found Raiding Party, Crush, Domination, Evolution, and Lil Buddies to be among my favorites. Hold Them Off, Nature’s Revenge, and Sorcery are some of my other favorites depending on my deck.

For Pyke, Lie in Wait felt like a necessity. It didn’t feel great having to build around Pyke due to it being hard to level him up at times due to the inconsistency of Lurk.

If you don’t have Lie in Wait, it is possible to finish the run but you will likely need to rely on another champion and not the Lurk mechanic.

Personally, I found the most success when I drafted more 3 mana or less units along with Lie in Wait.

Also, be on the lookout for the item in shops Mariner’s Vengeance which gives +1|+1, Lurk, I am a Lurker.

For Nami, I drafted Attune units as well as attachments that gave me bigger stats to allow me to get Nami down safely and regain tempo with big units. I

wouldn’t rely on Nami too much but instead, look at getting elusive units that you can add buffs to. Drafting plenty of spells to help get rid of spell mana for Nami is helpful as well.

I recommend focusing on Speed and Skill. If you can finish the run around 45 minutes without dying (but still healing) then you can get two A’s for your run and the champion is complete.

If you can do that with all 5 champions then you can unlock the Gangplank card back.

If you are having a hard time with this, then I recommend focusing on one skill at a time rather than focusing on both of them at the same time.