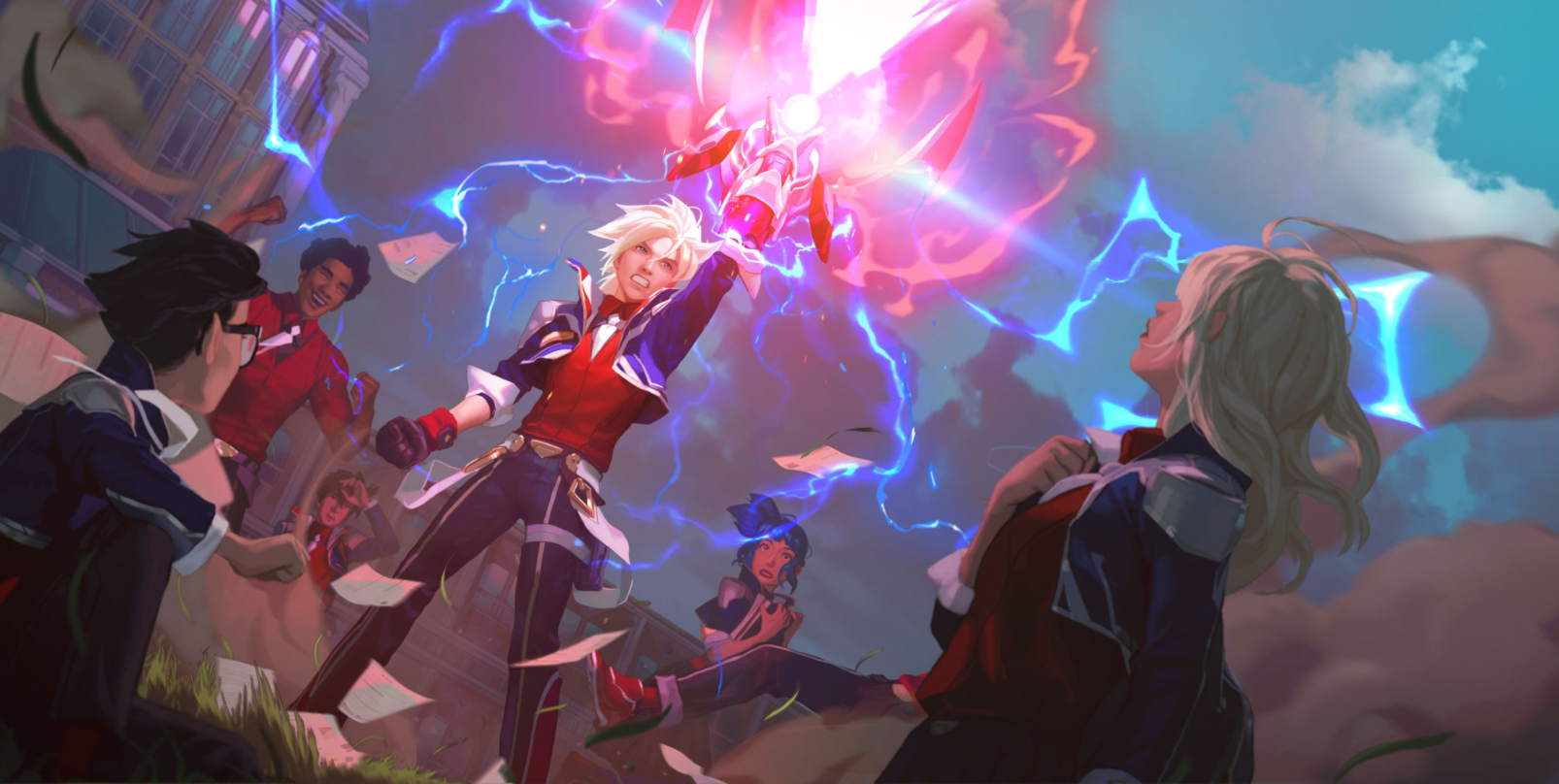 A beloved skin line in League of Legends has now joined Legends of Runeterra.

Lux has a new skin and level-up animation!

Her level-up animation is smooth and perfectly captures the Battle Academia aesthetic that so many players know and love.

Plenty of players will be buying this skin, but Lux has not been strong or part of the meta for a while.

I feel that if she was a bit stronger, that skin would do extremely well as her standard level up feels a bit dated compared to other champions in Legends of Runeterra.

Battle Academia Ezreal will also be joining Lux with a new skin as well.

In his level 2 art, it has a much different feeling than the Ezreal we typically see who has blues pulsing from his gauntlet. This one has more pinks and reds to it instead making it a unique skin to him.

Ezreal has been pushed out of the meta a bit from Caitlyn replacing him in Draven/Caitlyn decks, but some players still run Draven/Ezreal for anti-control as well.

There are also a few players who enjoy Karma/Ezreal, so if you want the skin and are looking for a home for Ezreal, I recommend Draven/Ezreal or Karma/Ezreal!

Poppy was one of the strongest champions to come out of Bandle City and will be joining the Battle Academia lineup. I love her skin! The turquoise hair with the purple eyes is adorable along with the slight smile as her hammer blasts people into the air. There is a lot going on in this picture and the colors and pop are just stunning! 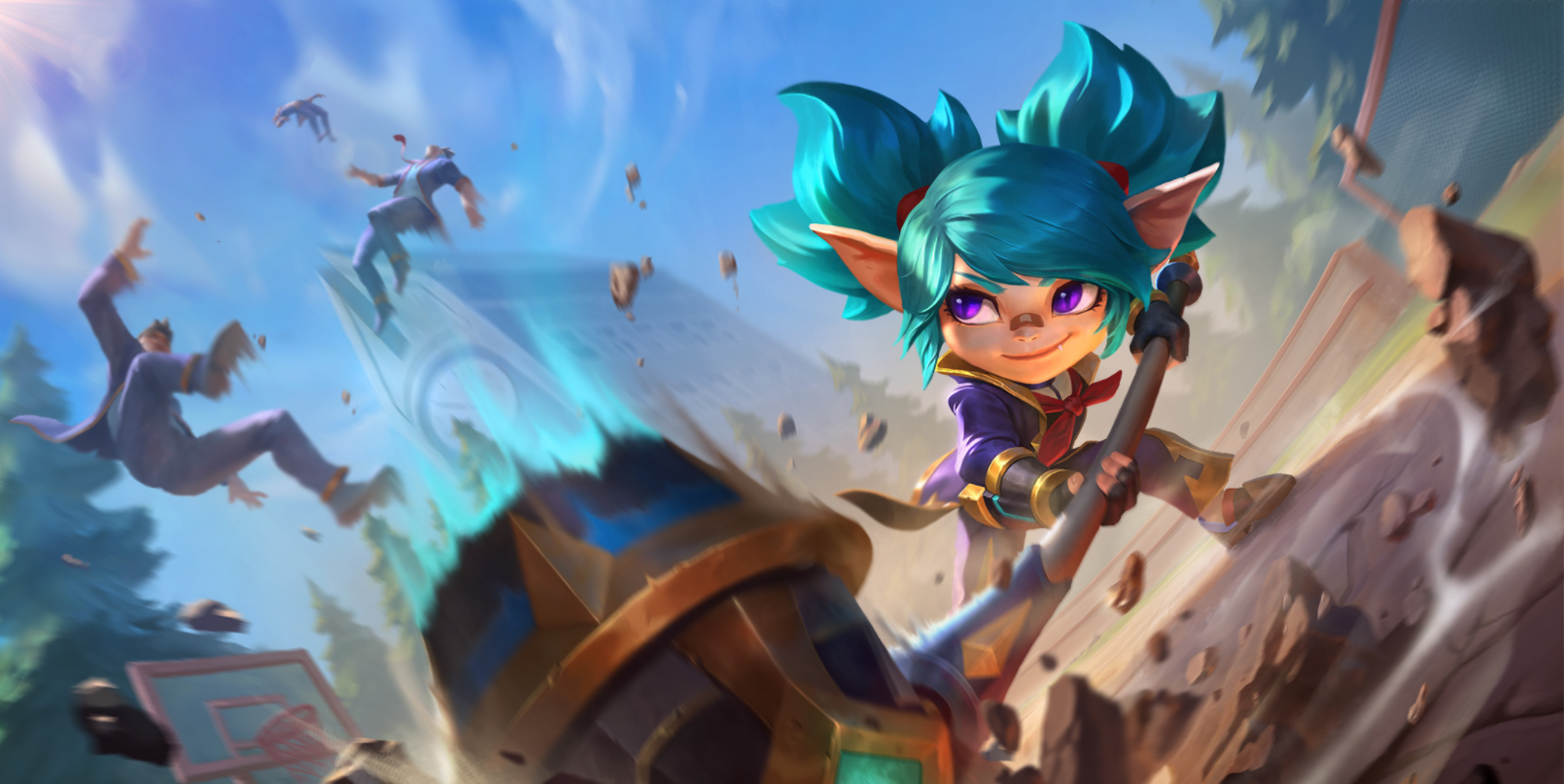 Poppy goes into just about aggressive deck in the game right now, so I expect to see this skin everywhere as it is adorable and a lot of bang for the buck due to how many decks she fits into!

Caitlyn looks amazing in her new skin. Her hair is purple and pink and I absolutely love it.

Her gun also looks great and fits her really well. I think Riot did an astounding job with the look of this skin. I really wish it had a level-up animation as well.

Caitlyn has two clear homes. She is played in Caitlyn/Draven Control as well as Teemo/Caitlyn Trap Puffcaps. I expect to see a decent number of this skin as well due to her flexibility and popularity in different decks.

Leona’s art is interesting and looks the least like her in my opinion. In the level 1 art, she is pouting with a piece of broccoli on her fork with what I assume is in the middle of a food fight in the lunchroom.

There is so much detail in this art. My personal favorite is the Solari symbol on her drink cup which I think is an amazing touch. 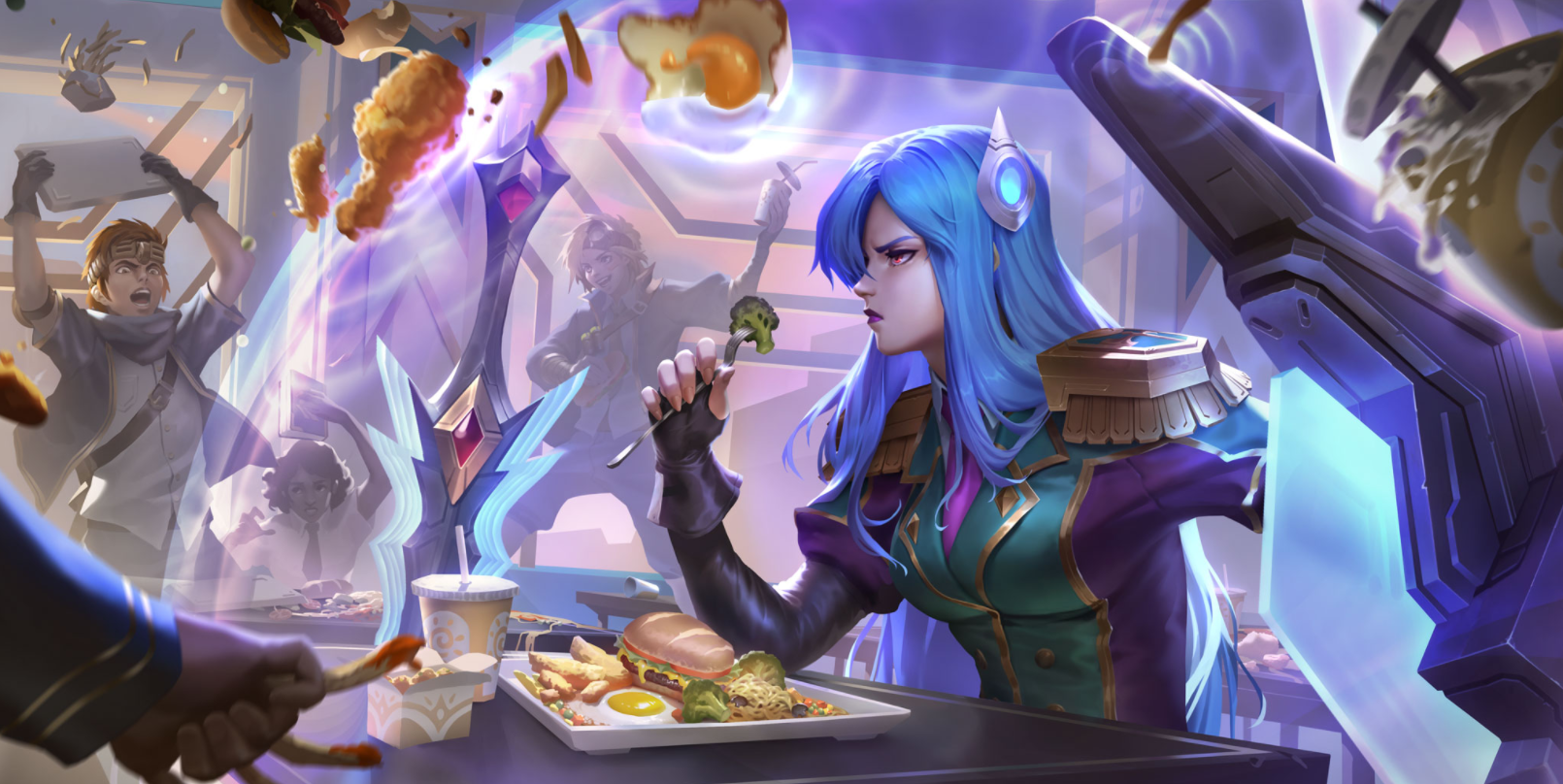 Her leveled-up art form is the best though and what I think of when I think of a Battle Academia Leona skin. It has the power I expect from Leona. I love it!

They knocked the final skin out of the park: Katarina. Her level one picture is her walking through with confidence edging on a bit of cockiness that Katarina possesses in League of Legends.

That is why I love this skin for her. However, I do wish that Katarina had a better home in Runeterra.

In her level 2 art, it might be my favorite skin in the whole set. The colors are amazing and pop really well. It’s perfect. 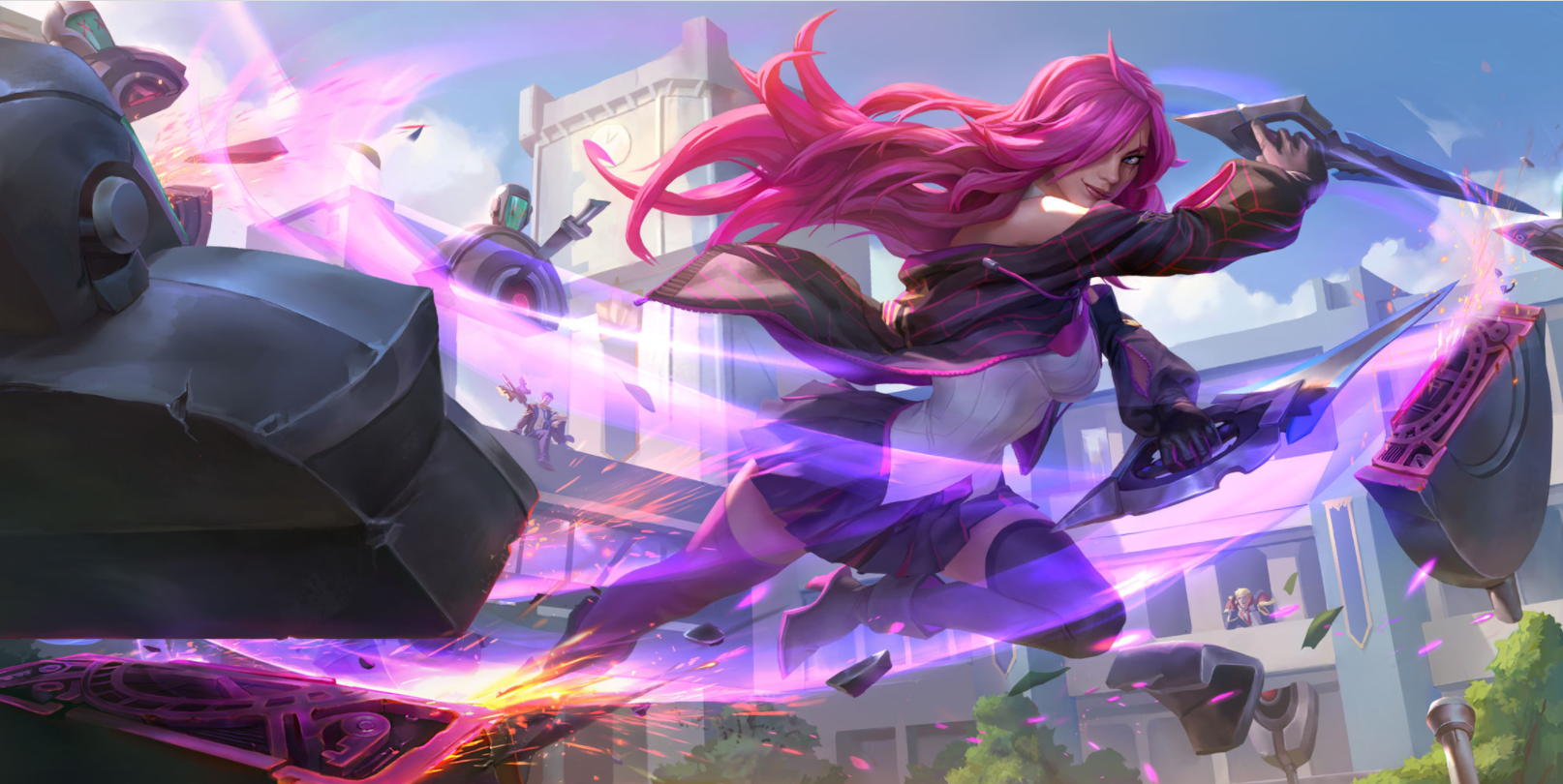 Personally, this one doesn’t fit the hype for me. It’s a bit too green and there isn’t much going on on the board which makes it feel a bit boring. 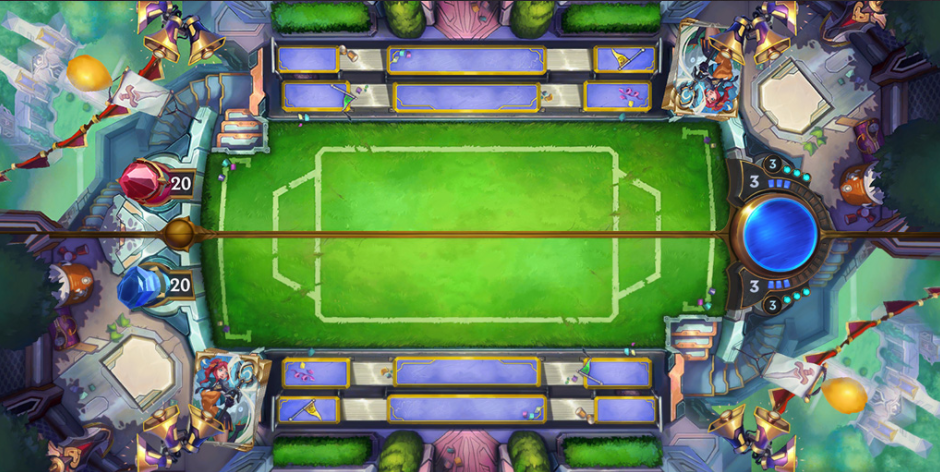 I hope that it has some great music to make up for the lack of things going on in the board. I don’t feel like the board makes me feel that I am there like I’d want it to. 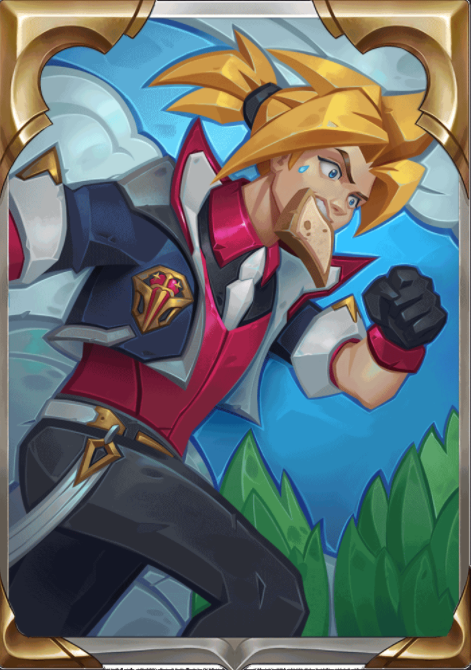 At first glance, the Ezreal one threw me off as I thought he had an extremely big chin, but after looking at it again I noticed that he has a piece of bread in his mouth.

Personally, I would have preferred having a sandwich in his hand or something rather than in his mouth. 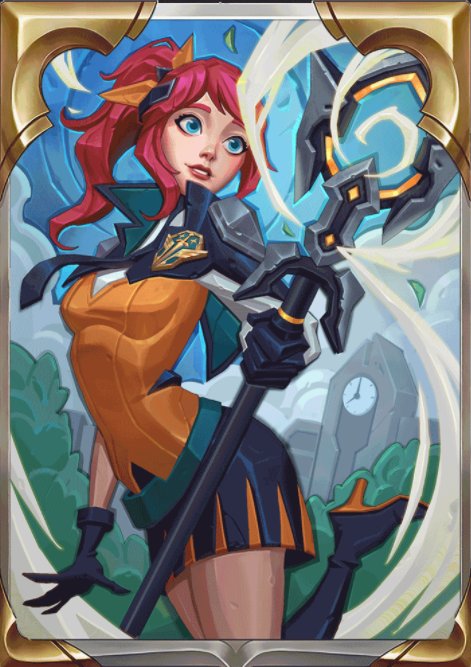 What can I say? Lux is just about as perfect as it gets. This is what players are looking for when they think of Battle Academia Lux.

Cute, Mystic, and with great colors and background!

When I see this emote I think Irelia partially due to the headpiece.

This is the I’m watching you emote which I think is an okay one, but has limited interactions with it for an in-game emote.

This emote has a lot of colors which I love. However, the ball of light makes me think of Lux with short hair.

I wish that instead of a ball of light we saw the gauntlet shooting out a pulse-like what we would expect from Ezreal.

It’s a pretty sweet emote that shows a bit of confidence in-game.

Overall, the skin line Battle Academia looks pretty sweet especially if you are into that type of aesthetic.

My biggest issue with the skin line is that a few of the champions don’t have homes which makes it harder to buy them.

I also would like to see level-up animations for every skin instead of just pictures, but I know that is a pretty agreed-on thought within the community.